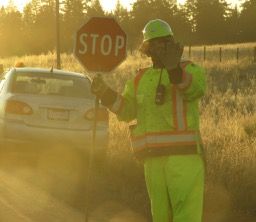 Before I visited the Precipice I had to go to Williams Lake first. I left for in the dark, and the sun rose close to town, right where a humungous paving crew were working.  They had been contracted to do a large stretch of the Chilcotin highway during the summer but of course all had to be stopped.  Now they are working 24/7 to try and get the contract finished.  In town I had my van serviced ready for Harry’s book tour, and also took the dogs to the L A Doggy Shop who advertise: “No dog is too big or dirty.”  They do an absolutely marvellous job. 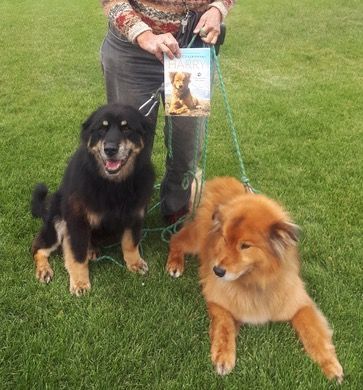 Because it was dark in the morning, all my journey photos were taken on the way home.  Through Riske Creek, miles of fencing were either in place or being built. 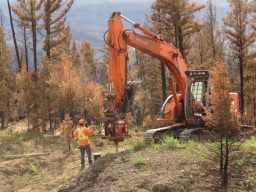 Very often the new power poles were attached to the burned ones; these two are separate – the burned one still holds the phone line.  The grass is greening fast – lots of water was dumped on it so it should do well next year. 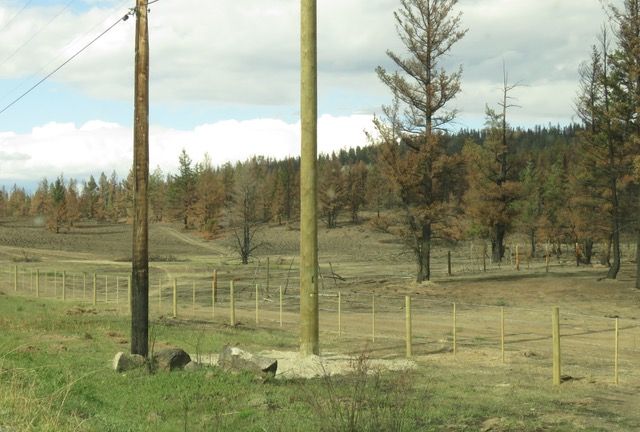 Further west storms mixed with smoke and gave interesting lighting effects (but not much rain.) 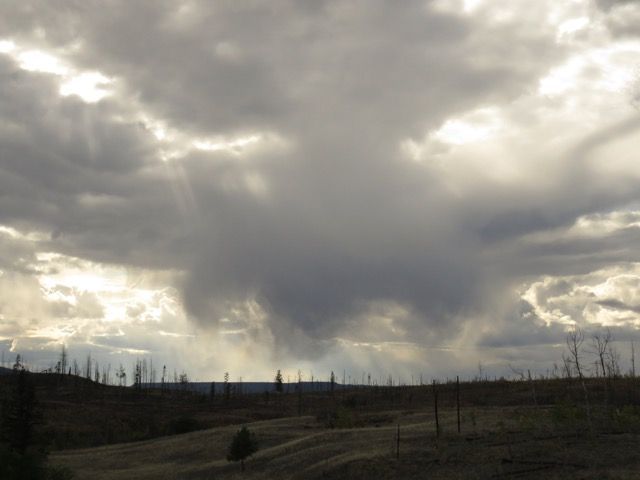 In one or two places, fall colours were showing already. 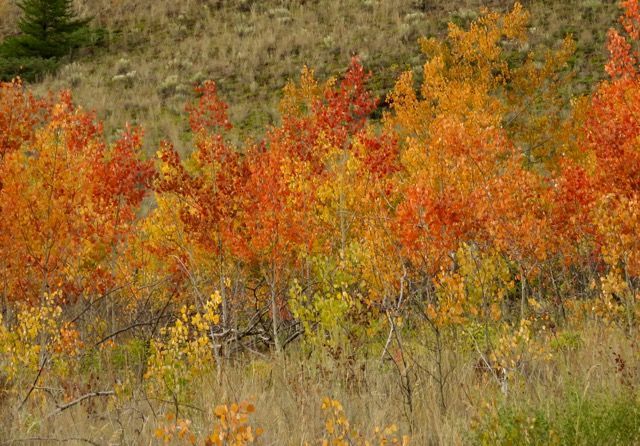 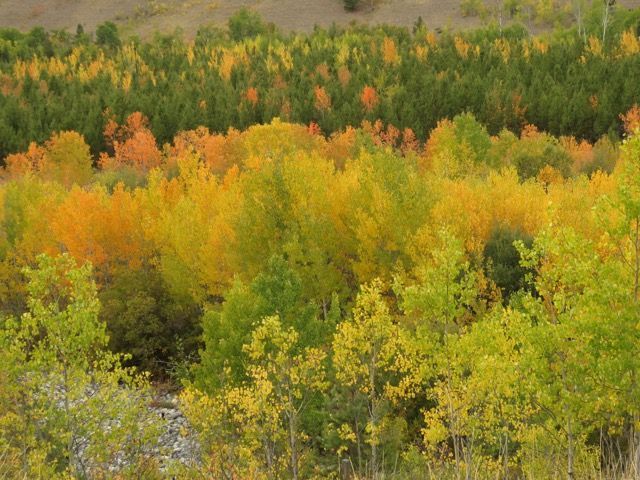 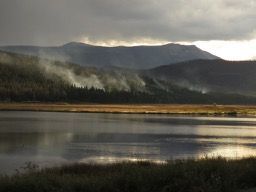 The first thing Badger did when he got home was roll in the dirt.  He even had the grace to look guilty about it! 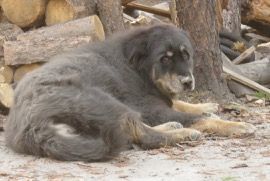 A dribble of rain started to fill my pond. 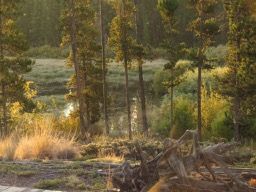 And suddenly there were 2 unfamiliar creatures in it, looping black and shiny like Ogopogo.  They were 2 young otters – and one caught a fish.  I didn’t even know there were fish in the pond – it is dry such a lot in summer.  They must have come up the tiny creek from the river as soon as a bit of water flowed through. 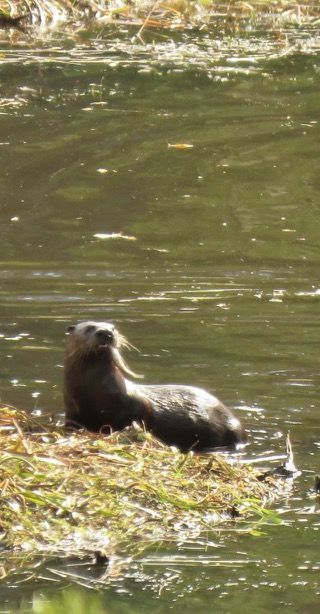 A couple of days later I went down to the Precipice.  I never do Facebook but had followed their daily reports while the fire approached, surrounded and passed them by.  Normally it is hard to spot the turnoff from the logging road, but the fire signs are still up.  There are no fighters in the valley any more but crews will come in and de-activate the fireguards by heaping dirt at their entrance. 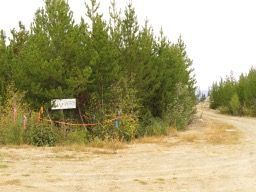 The Precipice Road is decorated by hundreds of Fred’s stone people. 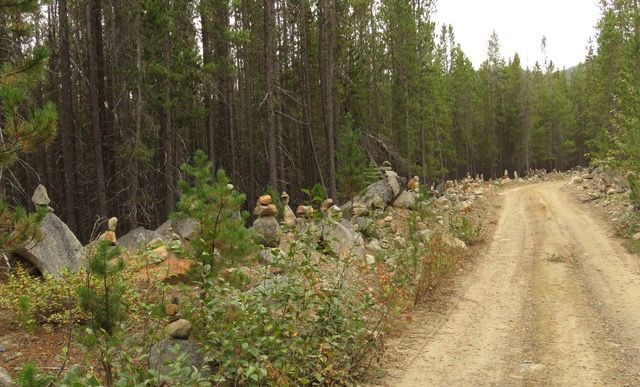 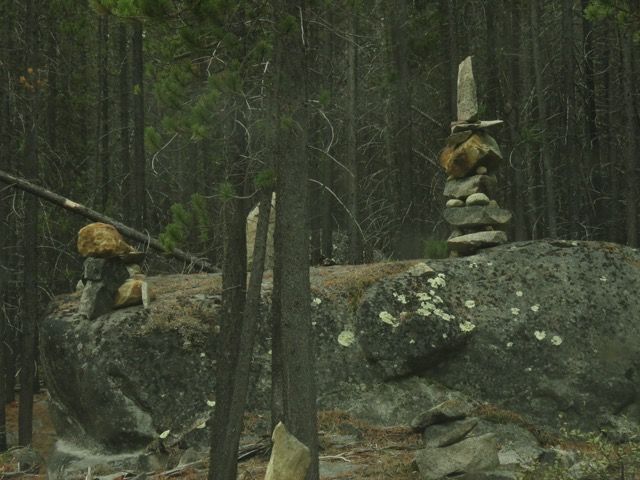 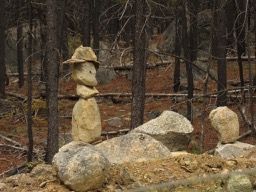 Many were destroyed by the heavy machinery that drove up and down, but in return the firefighters built some of their own! 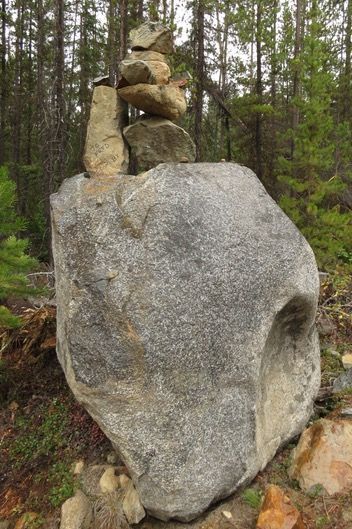 The left-hand rock has the inscription: to Fred from BX (which was the name of the crew.)

Driving through the valley it was amazing to see how  lucky the inhabitants were.  Some of the burning was deliberate to create a fireguard, but even so 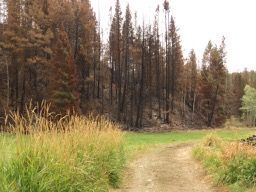 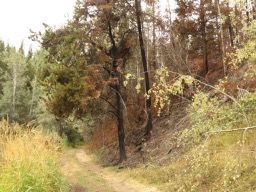 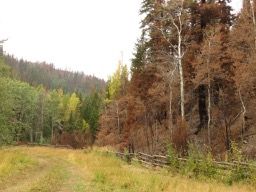 The Precipice people don’t need much excuse to make a party and we had a great dinner of homegrown produce and homemade dairy products.  Fred on the left and his partner Monika on the other side of me.  The rancher Lee Taylor, who hosts the Cattle Drive Parties,  at the end.  (His wife took the photo.) 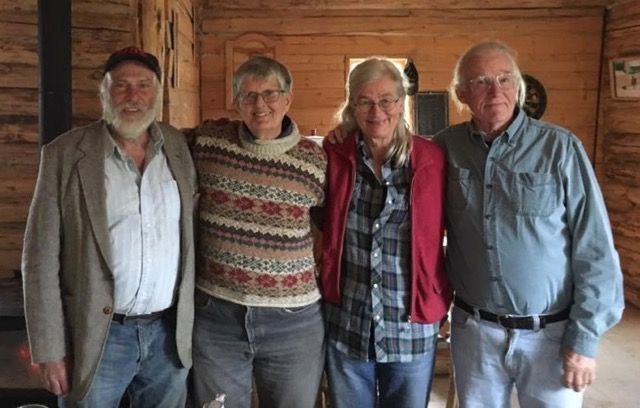 After that I had 6 days left to get ready for Harry’s Book Tour.