Scroll to the bottom of the list for more details. 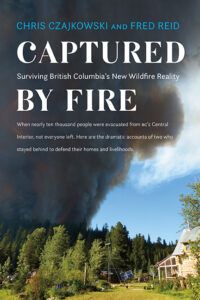 In the tradition of Lonesome, Harry and his sidekick, Badger, tell the stories of all the dogs in Chris’s pack from Lonesome to the present day.

The  author’s life from childhood and through her international travels, showing how she ended up in Canada and became a wilderness dweller.

Because the original Lonesome was such a good seller, the publisher issued this special anniversary edition.  Content is much the same except for an introduction by Harry. The Best Bread in the World and other food dissertations and recipes from Nuk Tessli, a remote, fly-in Lake high in British Columbia’s mountains. The dramatic account of the Lonesome Lake Fire of 2004 in British Columbia’s mountains. Lonesome: Memoirs of a Wilderness Dog

Years of wilderness living in British Columbia’s mountains as seen through the eyes of a dog. It will make you laugh and cry. Building a cabin on an off-road, high-altitude lake in British Columbia’s mountains. Life of a single woman in British columbia’s mountains on a high-altitude lake 2-days walk from a road. Diary of a Wilderness Dweller

A woman builds two cabins alone on a high altitude lake 2 days’ walk from a road in British Columbia’s mountains. A woman builds a cabin 2 days’ walk from a road in the Tweedsmuir Provincial Park, British Columbia. German translation of Cabin at Singing River (see above.) An artist’s summer in the Canadian arctic.

Some of my print titles are available as e-books on Kindle and other digital downloads.  Two e-books have been put together for direct sale through my website.