The smoke cleared as we began more SAR courses, but now we were presented with dull weather and rain. 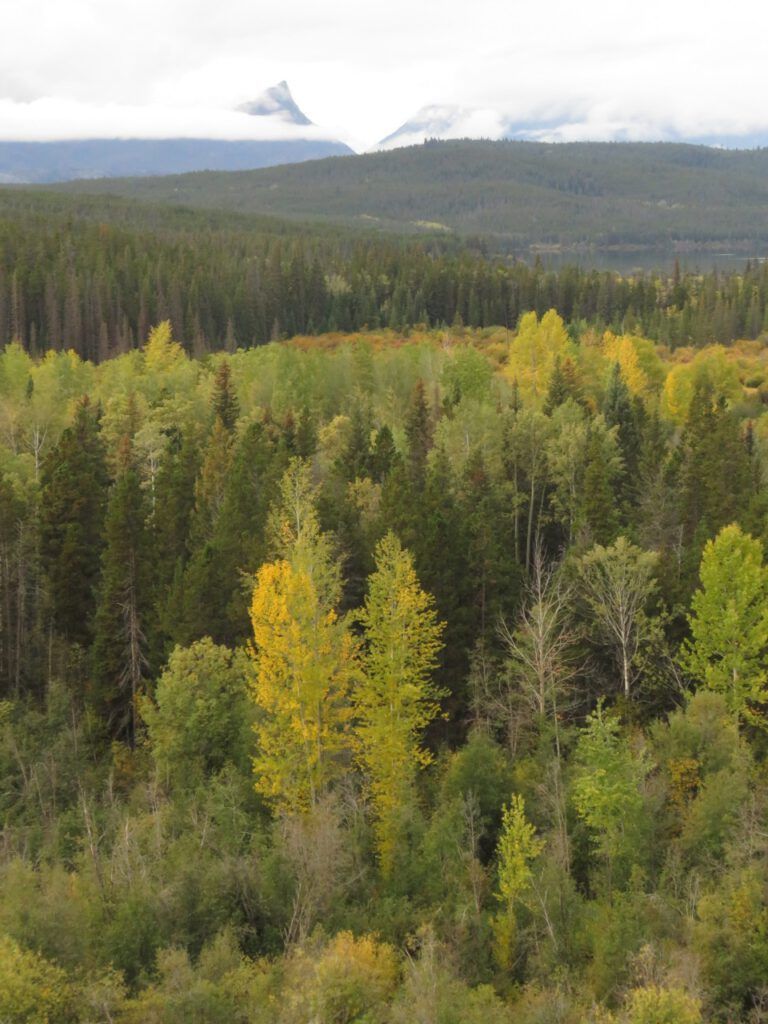 Bad news for Jonas who was trying to get into the high country.  He had considerable experience as a hiker – but only on well marked trails in summer conditions.  We brushed out one of my local trails.  Good to do when I have someone to carry the tools!  Badger decided he had to come, too, but he found the hike very hard and when we reached the neighbour’s road, Jonas ran ahead with Harry and brought the van. 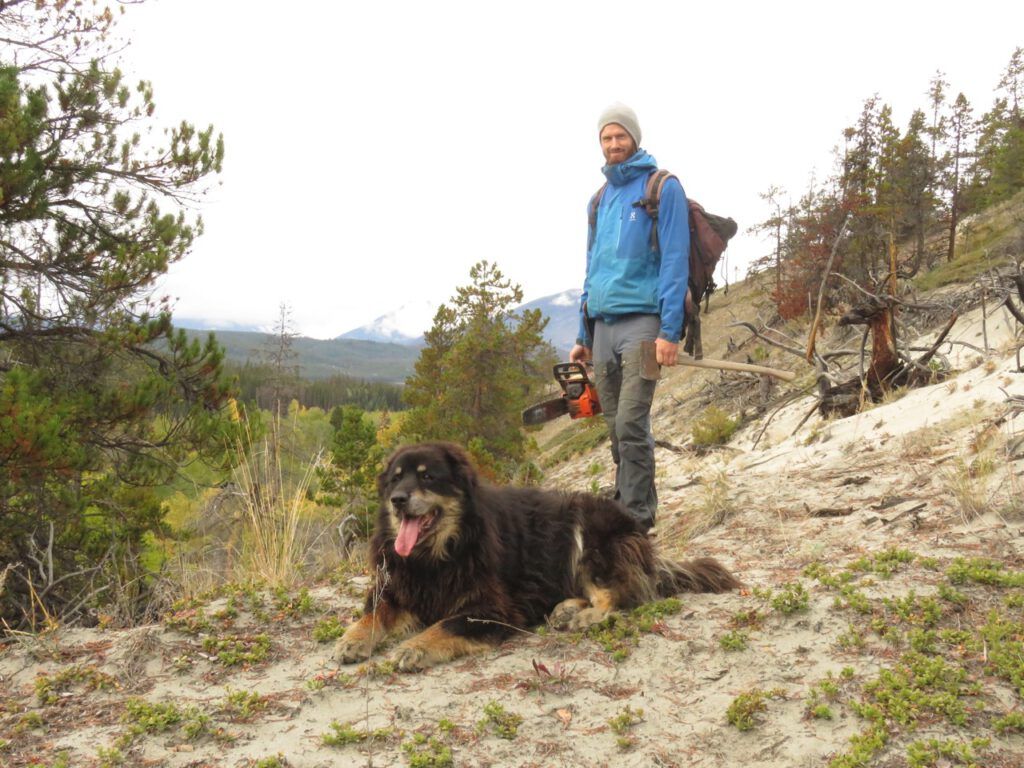 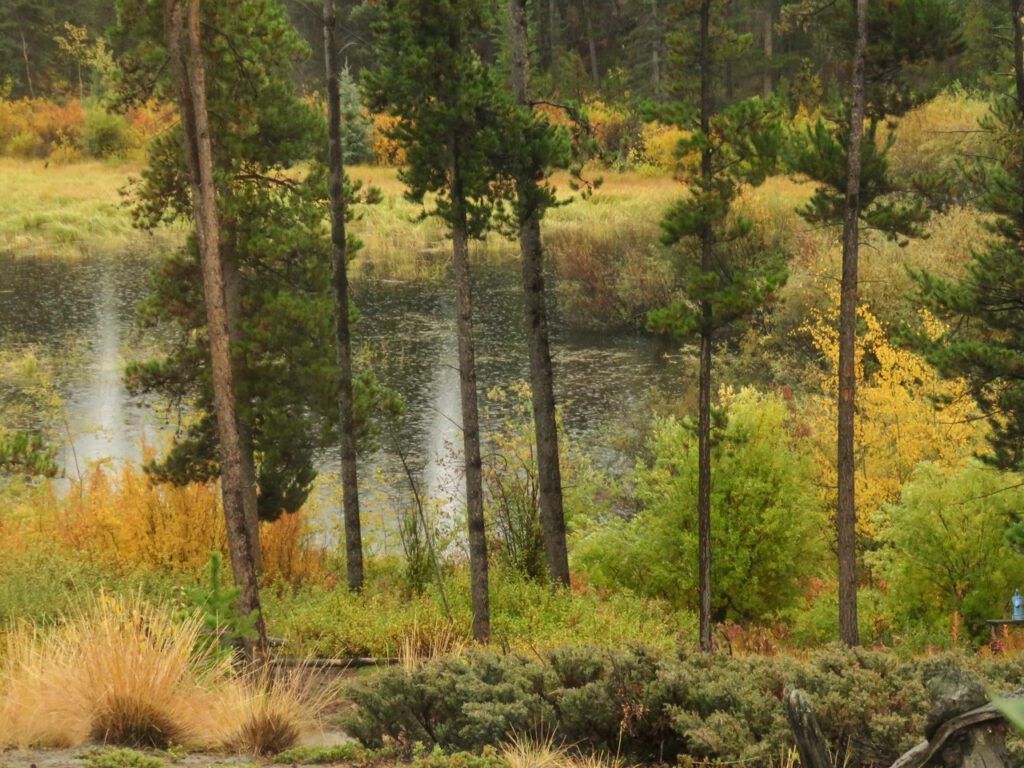 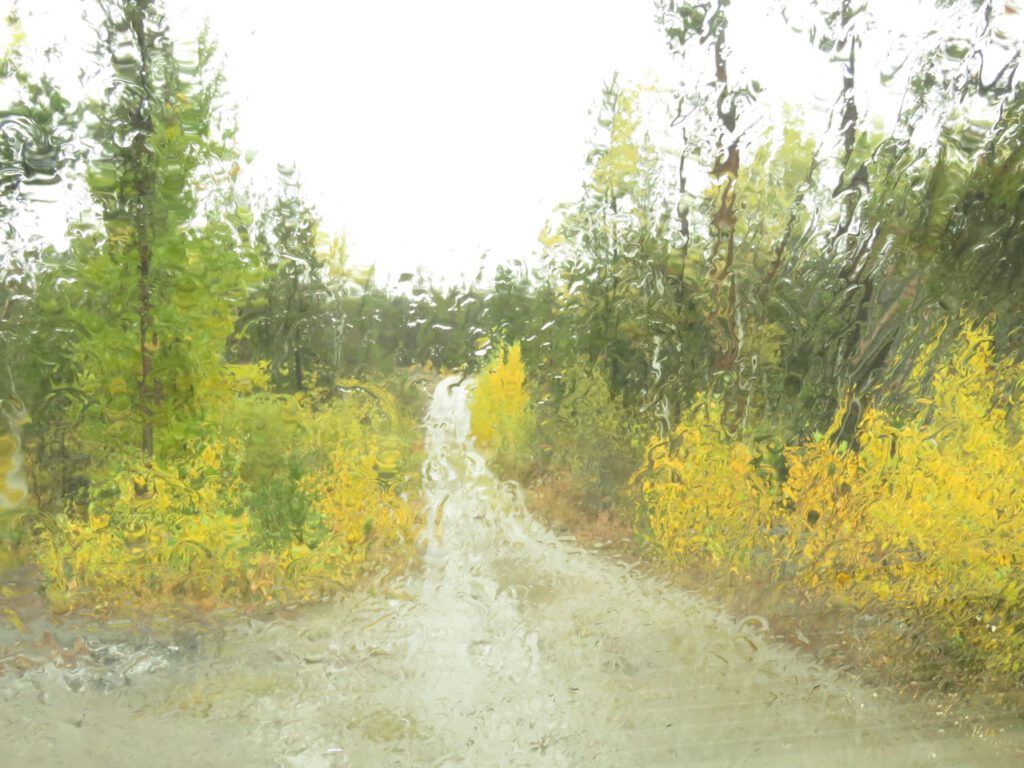 The first SAR Course was tracking.  It started Friday evening with classroom work.  The instructors had come from Penticton and walked our practice routes during the afternoon, but it deluged with rain all night so they took pity on us and remarked the trails early in the morning.  Each team of three was confronted with a set of almost clear prints, which first had to be drawn in detail. 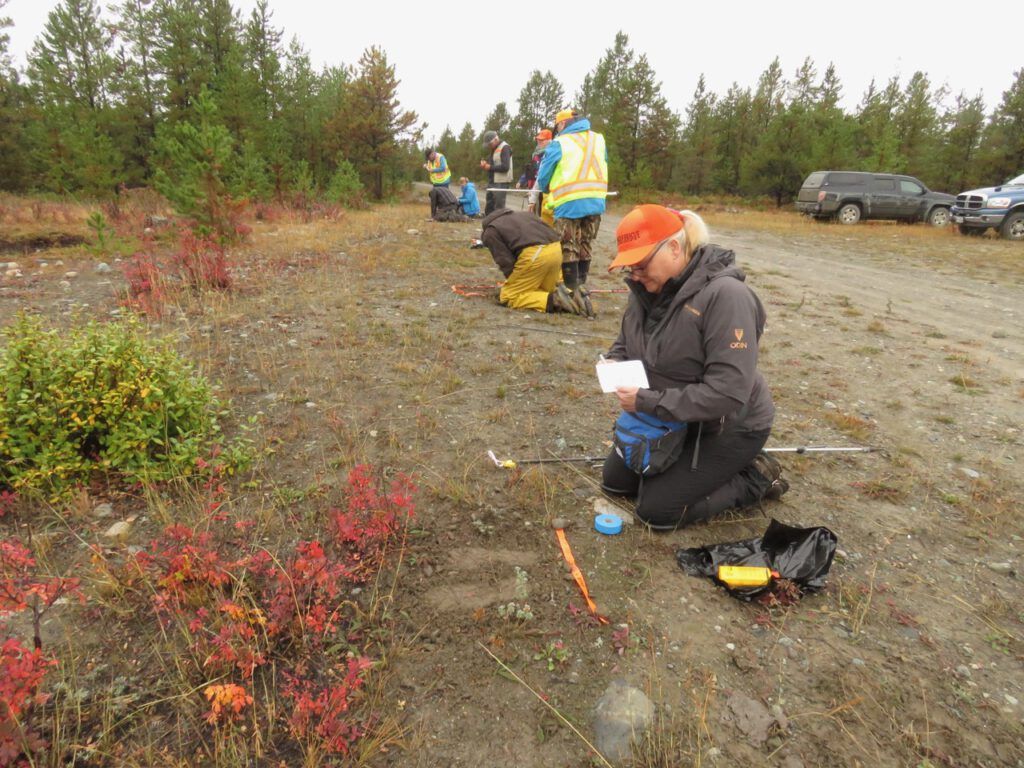 In the above picture we are on the old airstrip where I had taken Hussien for driving lessons.  This is where we were supposed to follow the trail. 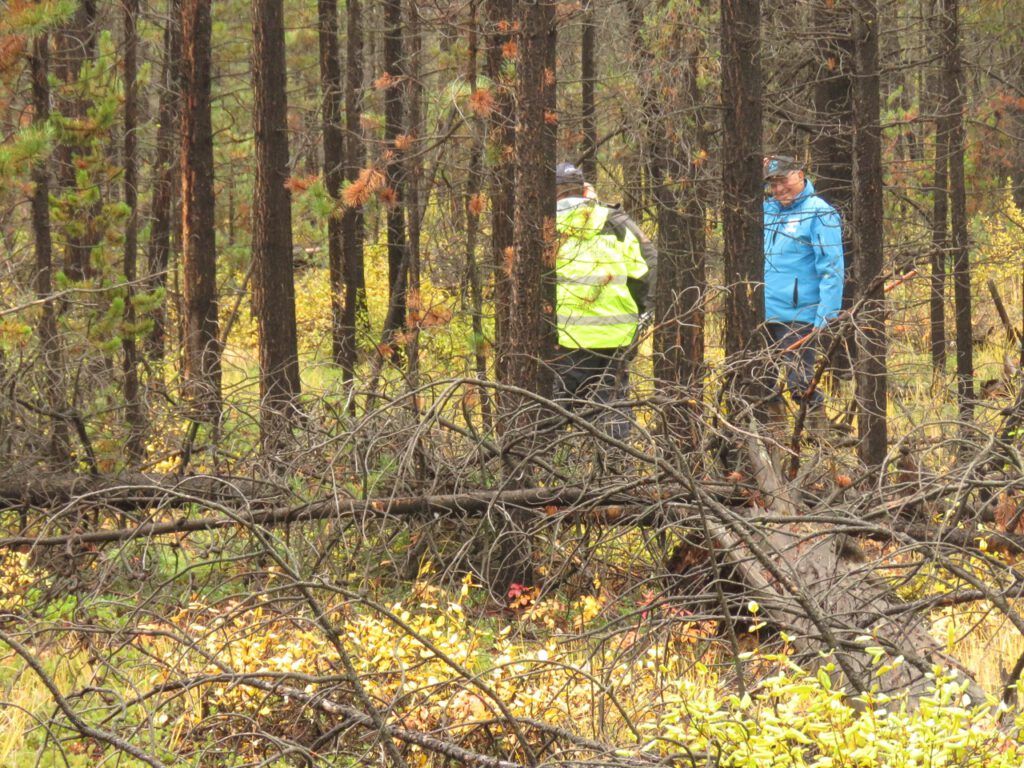 We had sticks marked with tape.  Two record the length of the boot print, and the third is the estimated  average stride. 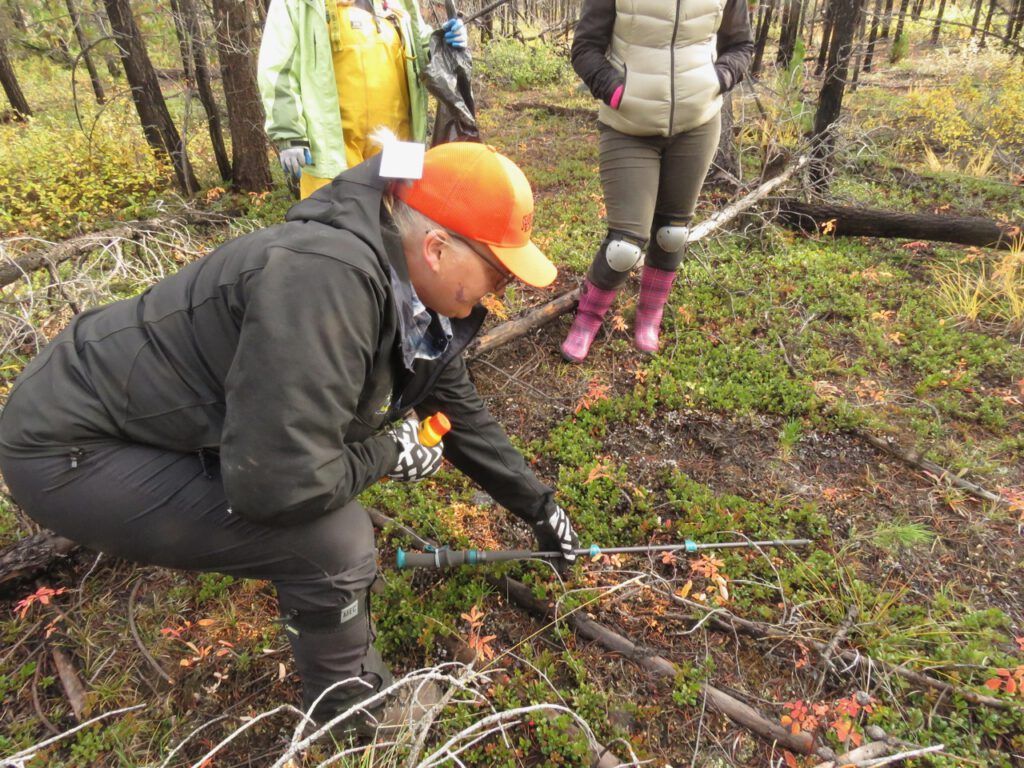 We were told what minute signs to look for – these became increasingly harder to spot as the day aged, even though it didn’t actually rain.  We marked the heel of the print with orange chalk.  Believe it or not, there is a footmark in the picture below.   (To the left of the cone.  The crushed bit of rotten wood; sticks newly scuffed; disturbed soil.) 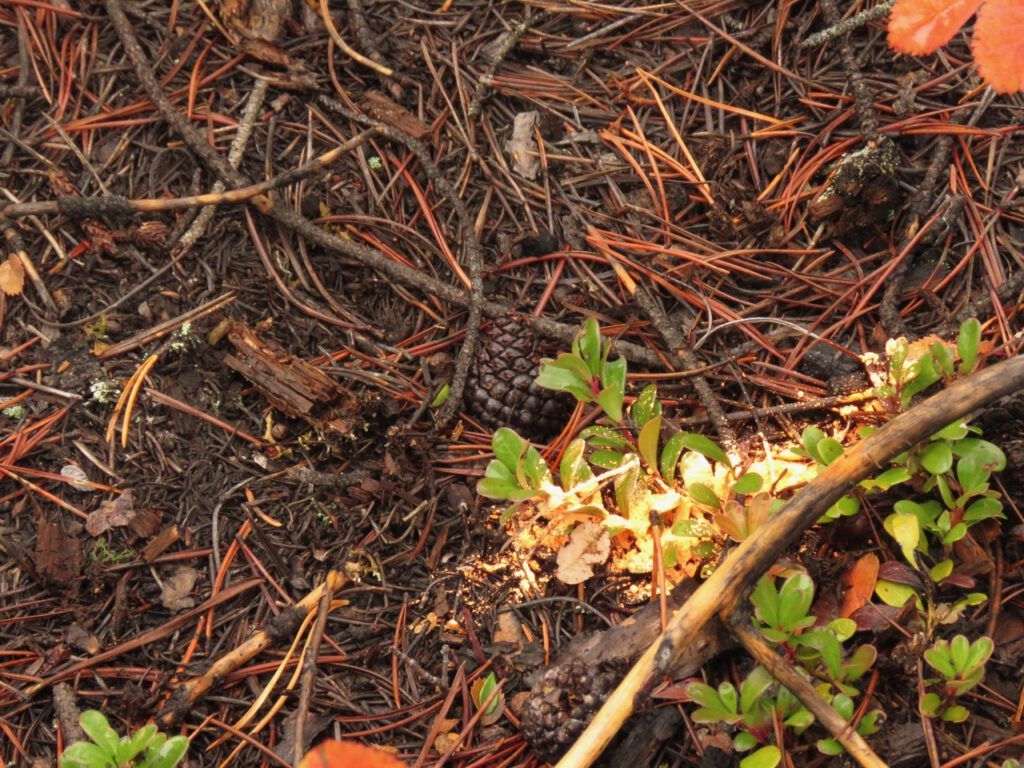 We tracked again at night after dark.  Very slow going by flashlight! But we delightedly found fresh-broken sticks just at the point where we were told to quit.  Next morning we rushed to the spot – only to discover that the neighbouring team had got lost in the dark and crossed our trail – the broken twigs were theirs!  However, the instructor said, we would be faced with that sort of thing in a real tracking situation – this is where the stride length and direction of the previous track would give us our clue.  We managed to find the double set of stamped prints and flagging tape at the end of our trail.

Two weeks later, we did a first aid course.  I have done these in the past but not for a long time.  The plastic “Annies”, the CPR dummies, haven’t changed.  The routine is a bit different than on my first course, which was 5 slow compressions followed by 2 breaths.  Now we do 30 faster compressions followed by 2 breaths.  The instructor put on some lively music to give us the right rhythm! 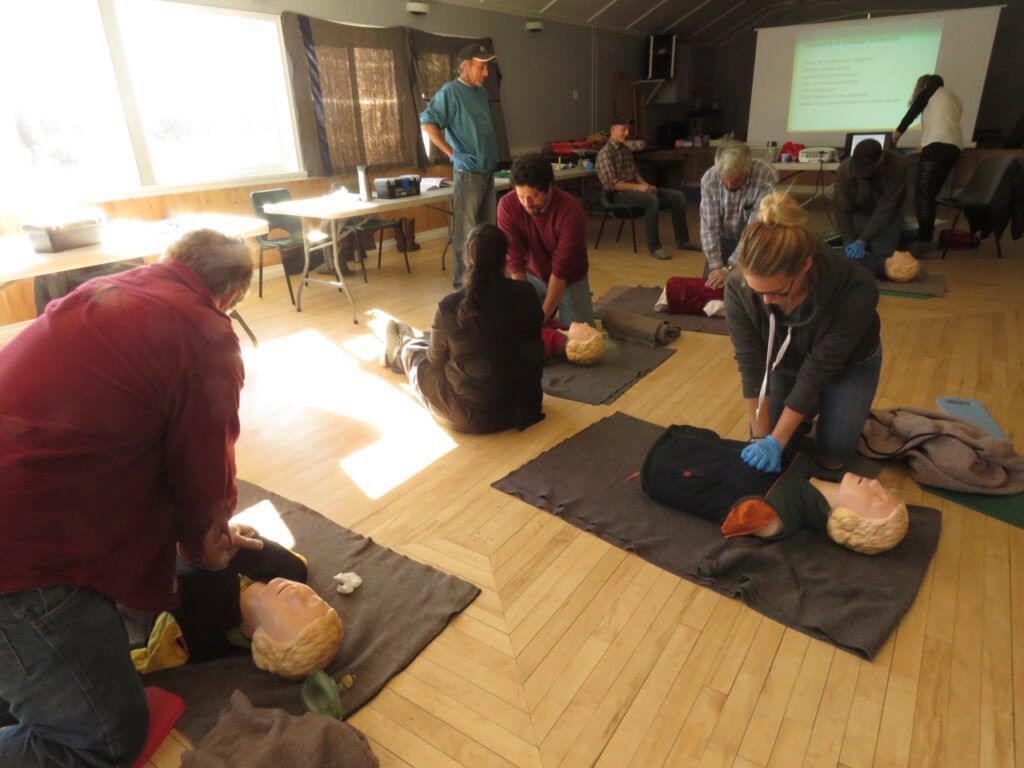 Then we tried out the AEDs.  Given that medical help is so far away here, our local medical group has placed these in a number of locations on the Chilcotin. (Post office, stores etc.)  A taped voice tells you very clearly how to set the machines up.  (Our instructor is the one with the tattoos.). Placement of the pads is important.  They administer a quite severe electric shock. 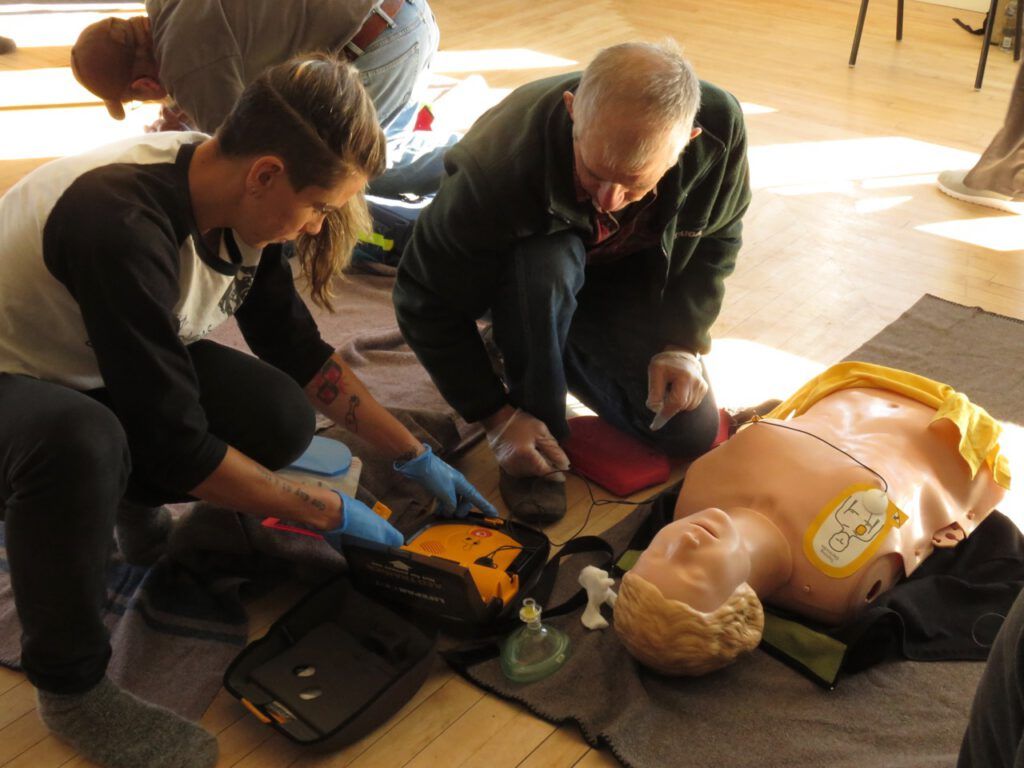 On one course I was told that if you are more than an hour from a hospital, forget CPR.  As with all the SAR courses, we are not taught how to save people, only taught the current rules and protocol, some of which don’t make sense.  Protocol says that if you are in a vehicle heading to a hospital you must stop before doing CPR.  Our local nurse, who has been at the Tatla clinic for donkeys years, once accompanied a heart-failure patient in the ambulance on the 2 and half hours’ drive to Williams Lake hospital.  His heart stopped 3 times – and each time she managed to resuscitate him and he survived the journey.  The ambulance did not stop!

Next we learned packaging. 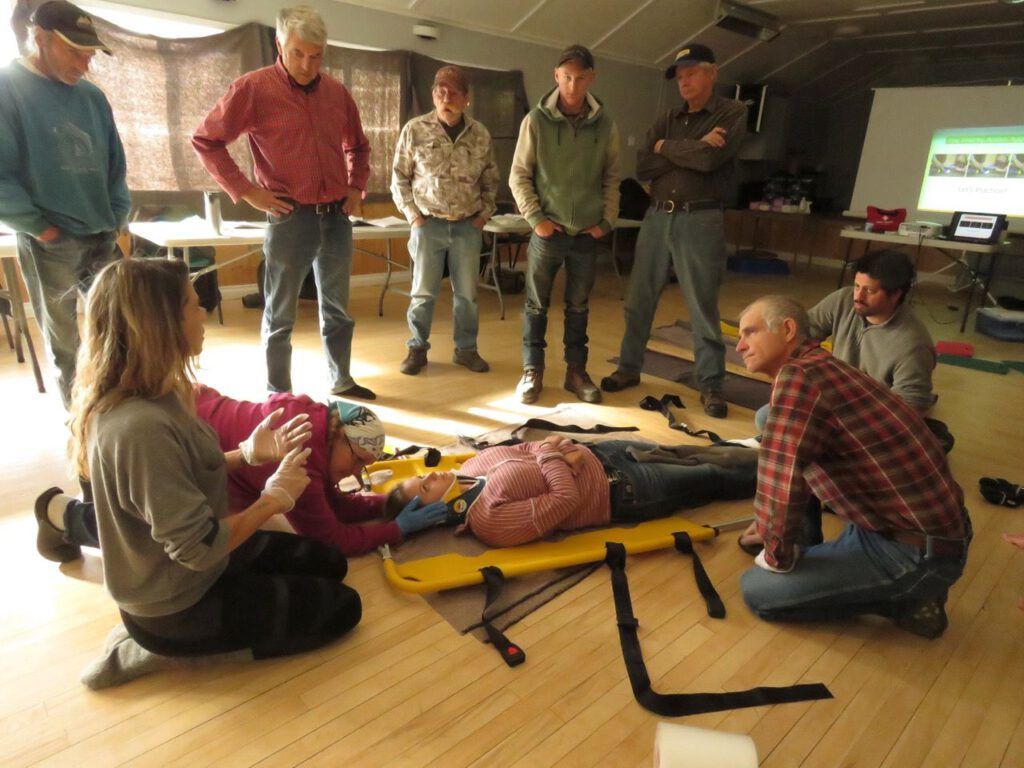 It was quite a lengthy process and the victims were always glad to get the restraints off but I asked this one to just hang on while I took a photo….. (the nose is on his T shirt!) 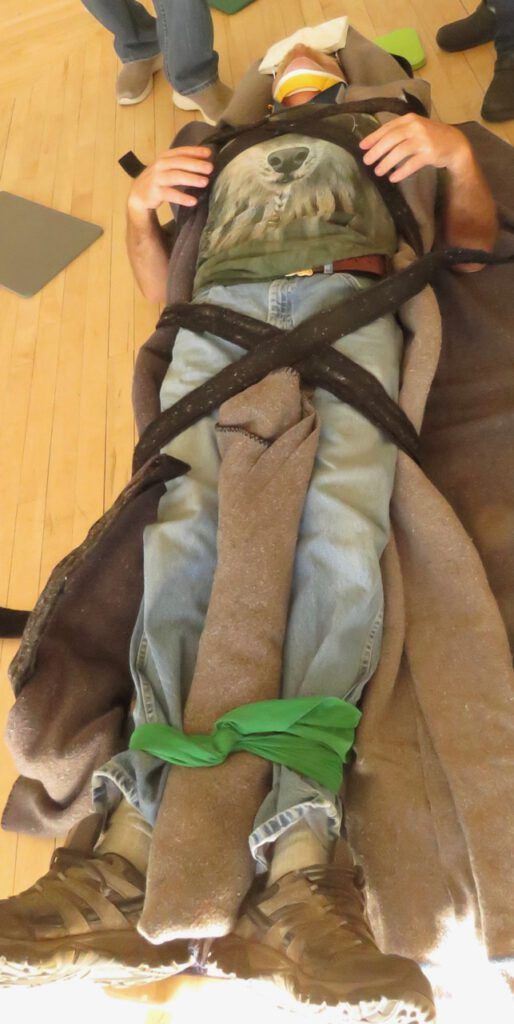 All this while, it seemed like the “Annie”s piled in the corner were laughing at us…. 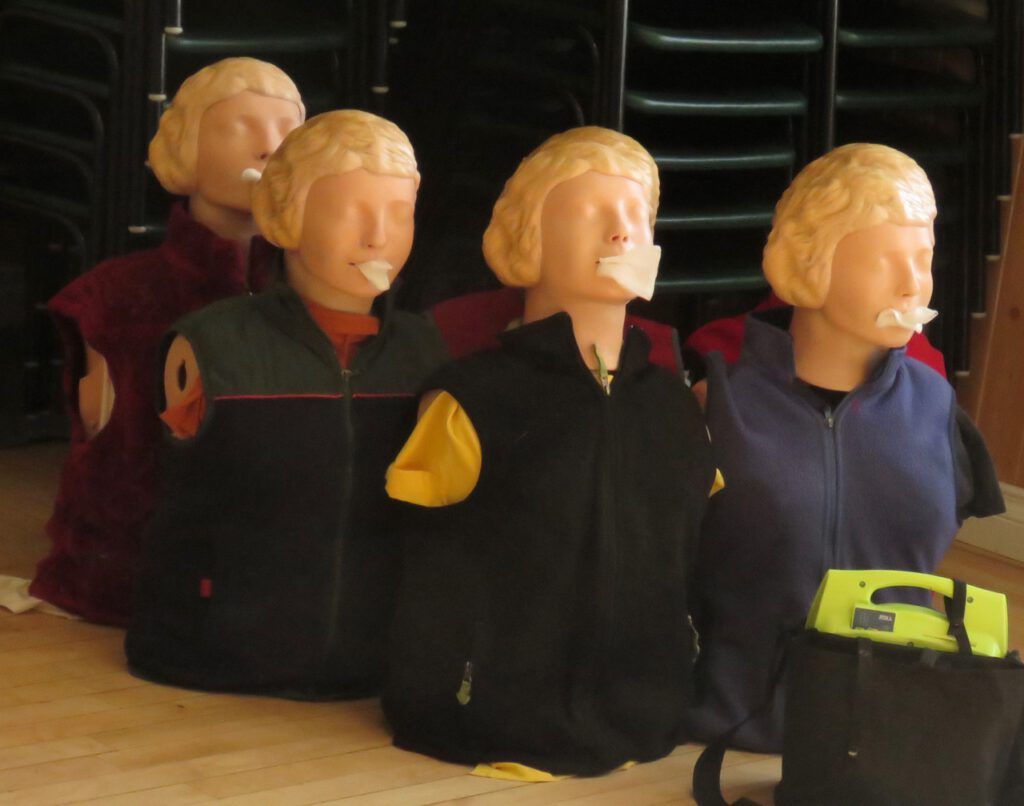 One thought on “More SAR Courses”