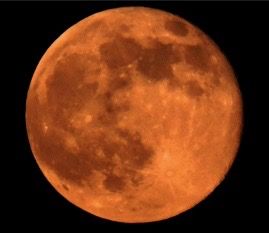 A blue moon is the second full moon to appear in any calendar month.  The first full moon in January was on the First.  This is balanced by there being no full moon in February this year, although there would have been had it been a leap year – the next full moon in 2018 is on the first of March.  The phrase: Once in a Blue Moon is used to denote something that doesn’t happen very often, but in fact they are not that uncommon, reoccurring every two and a half years.  This one, however, was special.  It was also a Supermoon, being closer to earth than usual – and subject to an eclipse.  That combination happens only once in about 250 years.  I doubt I will be around for the next one.

I did not take the above picture as my camera would not record the moon’s dim light – I swiped it off this website, which explains the phenomenon in detail, and also shows pictures that people took of the moon this morning, some of them quite stunning.  (All, needless to say, with city objects in the foreground!)

I have included the stolen photo, however, as this was the colour it appeared to me when I first got up, somewhere between 3.30 and 4.00 this morning.  Earlier during the night, the uninhibited moon had flooded the snow with incredible brilliance, but now the light was reduced, and the stars across the heavens were incredible.  The first thought in my sleep-befuddled state was – smoke!  That was the colour the moon appeared (if it was visible at all) through the smoke of last summer’s forest fires.  Incidentally, of the photos in the aforementioned site, the only actual blue blue moon was seen in Beijing.  No doubt because of the type of pollution that exists there. 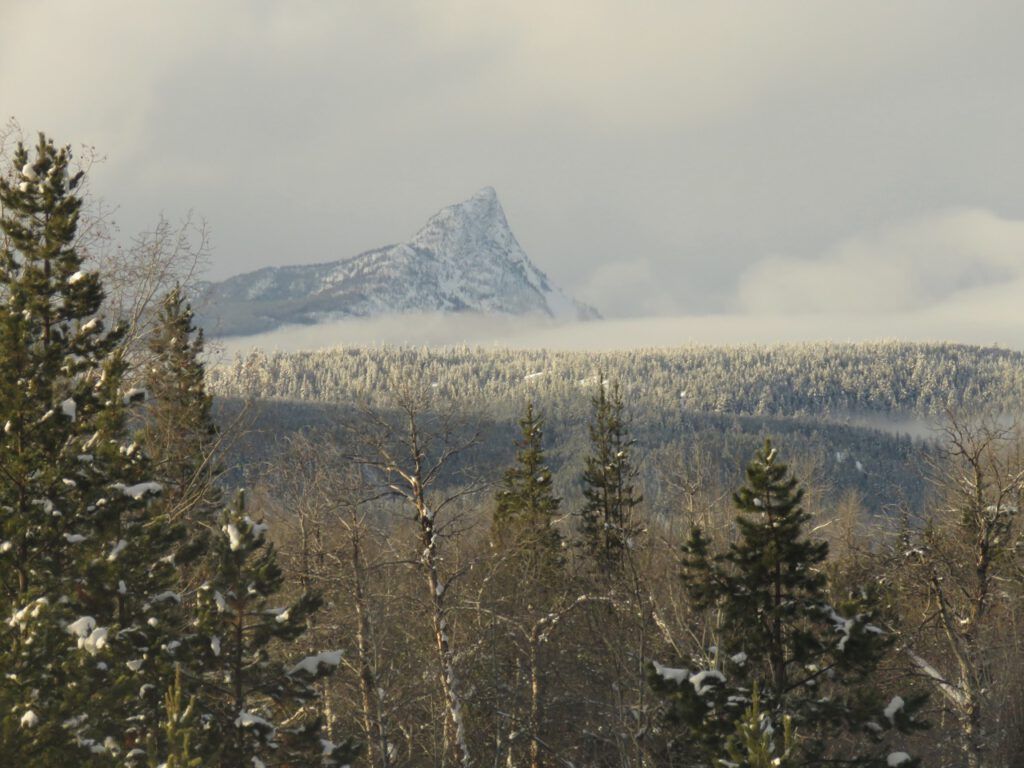 This blue moon month has brought us a bit more snow than we have had in recent years, which is a hopeful sign in view of future fire dangers, but in fact this largesse has not extended many miles east.  It has also brought a lot of cloud with interesting light effects.  Finger Peak was always too steep and rocky to be covered in dense vegetation, but since the fire it is looking particularly bald. 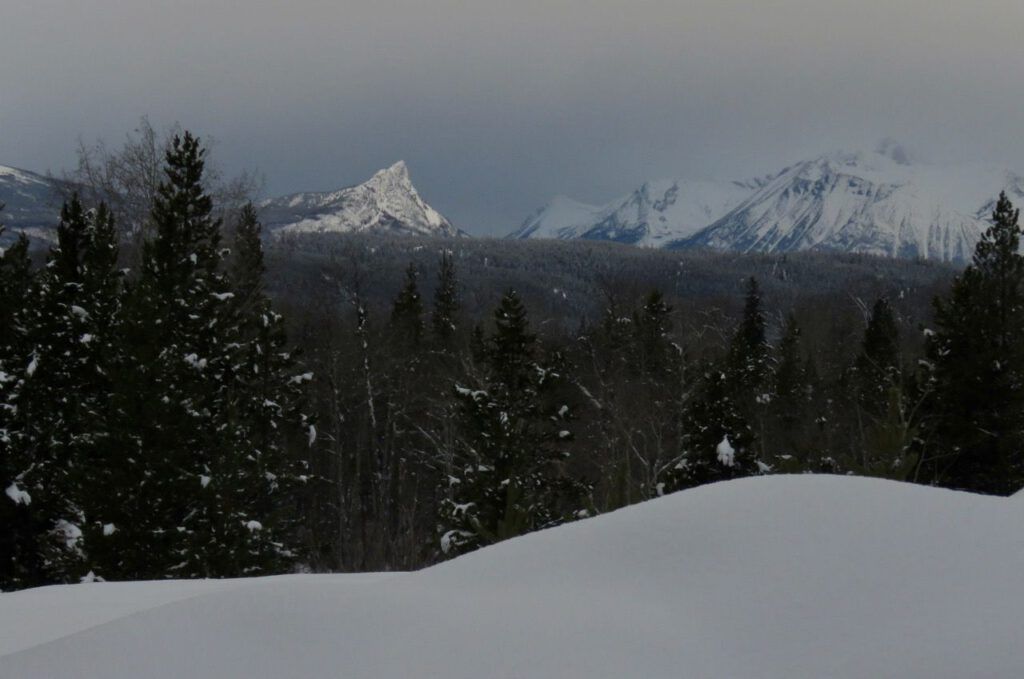 Badger is enjoying the exceptionally mild weather (regularly about -18C at night and occasionally just creeping over freezing in the afternoon).  He prefers to be outside. 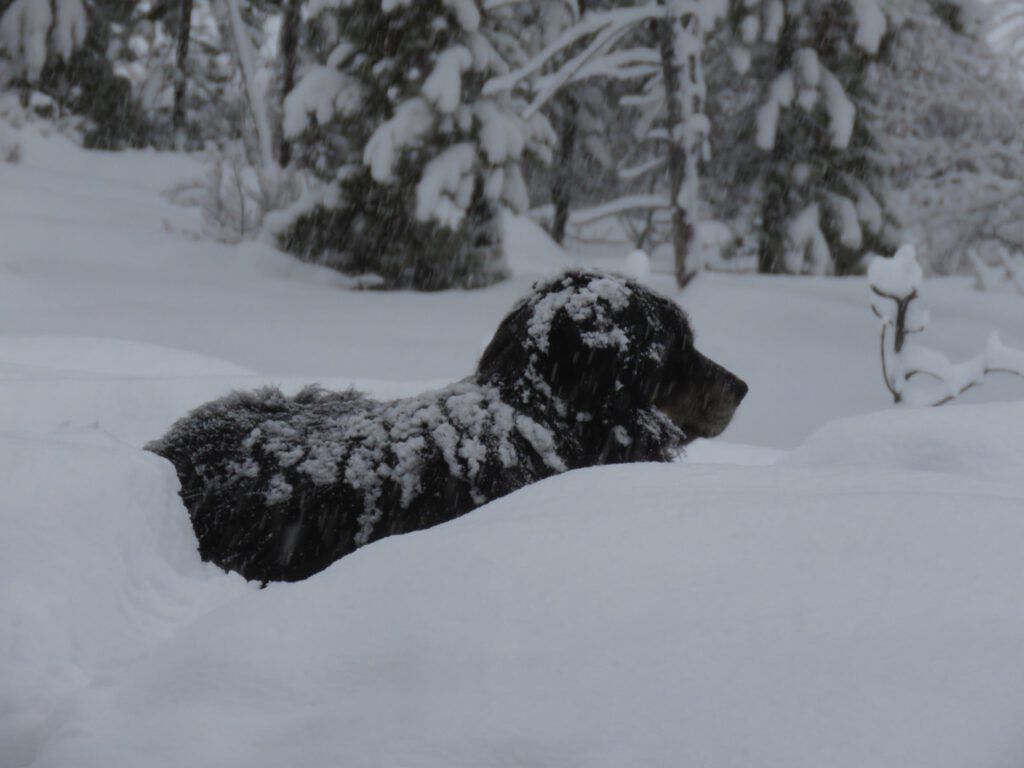 The country is now looking quite pretty. 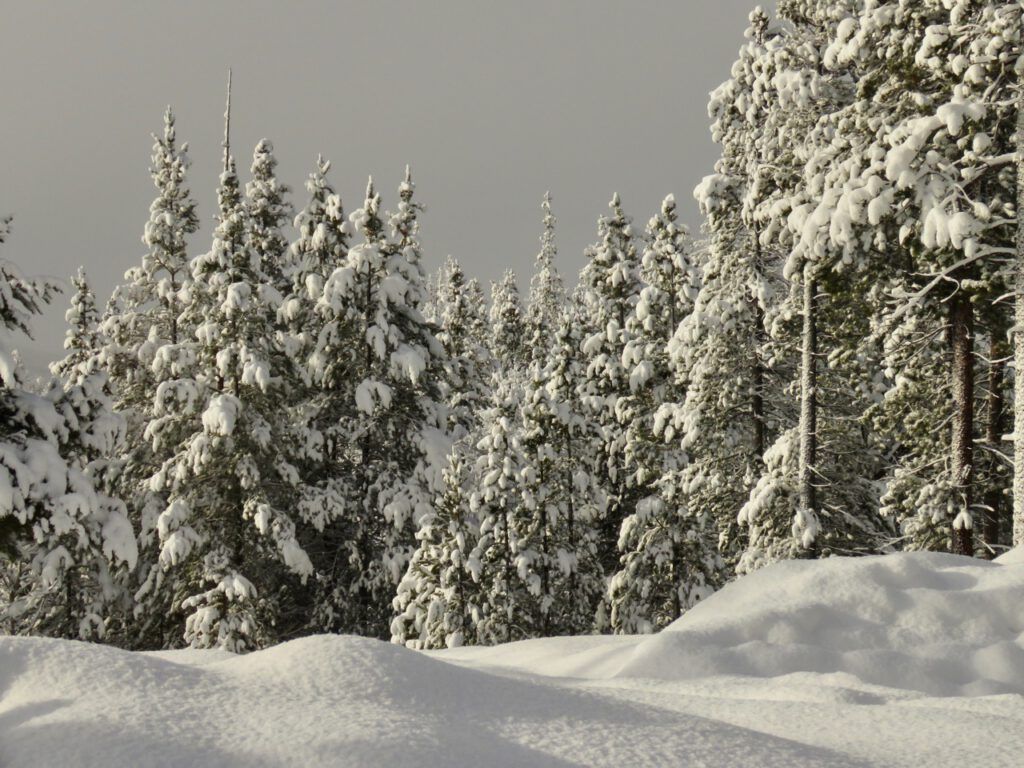 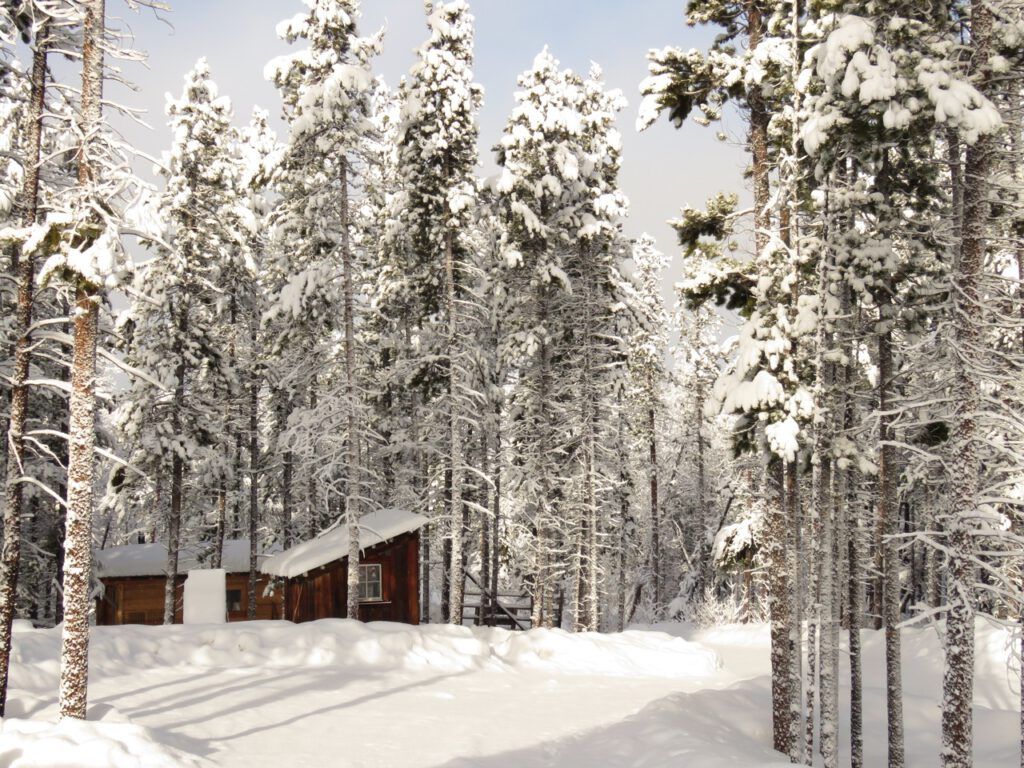 There has been very little wind at ground level (which is why I don’t bother with a windmill to create power), but up on the peaks it has been screaming. 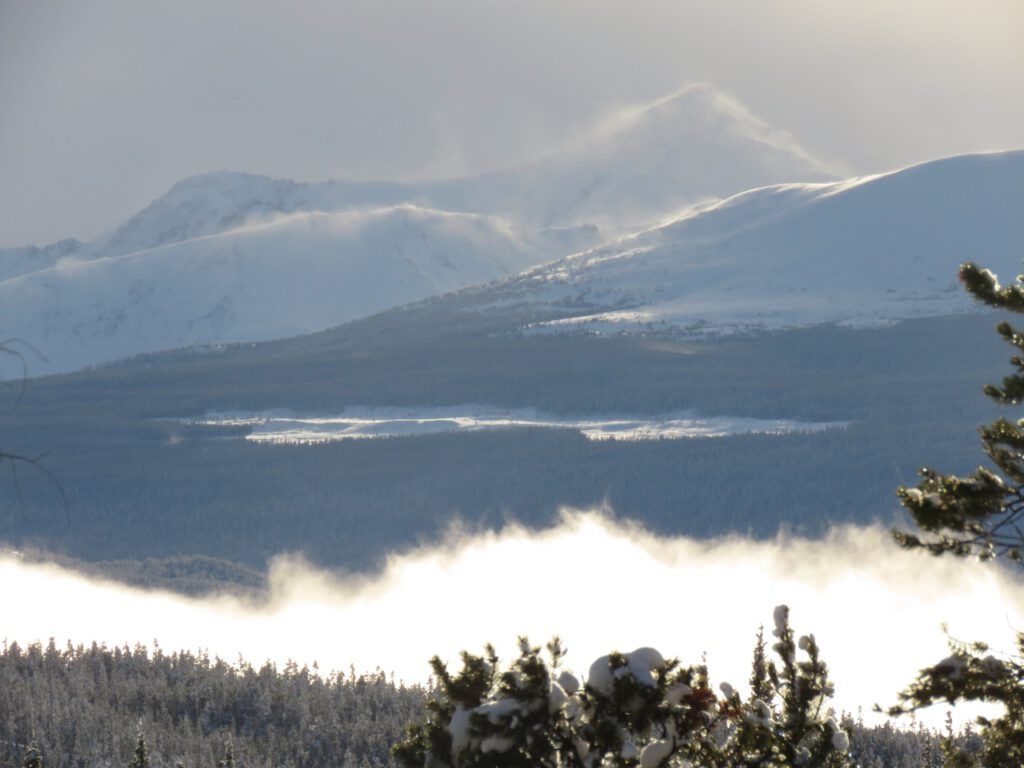 Fog is common.  (Middle Mountain behind.) 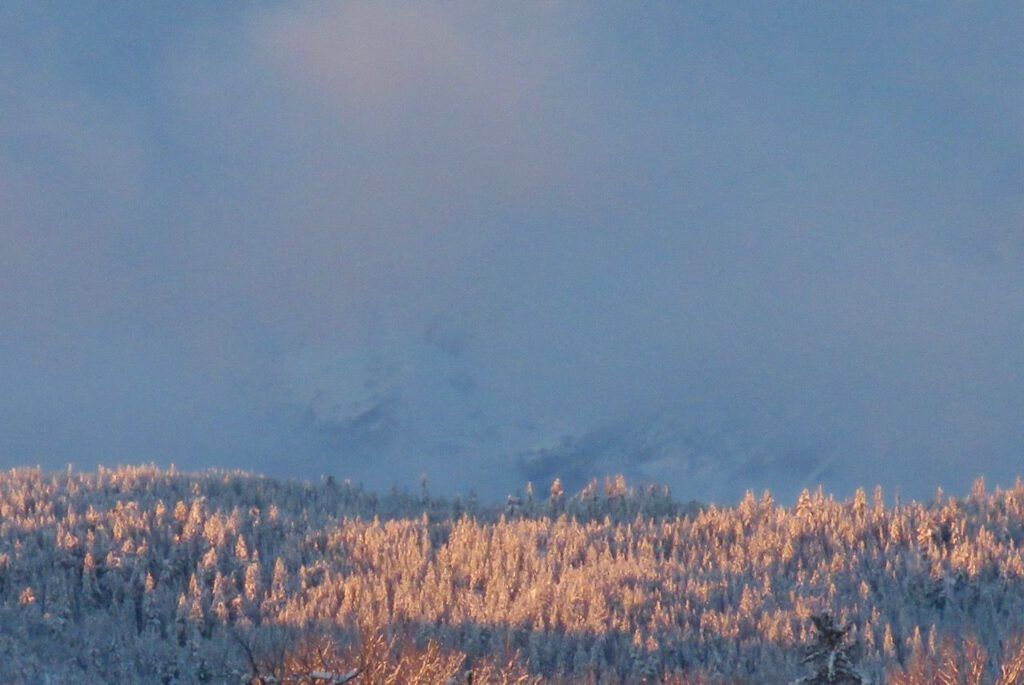 A stray gleam of sun. 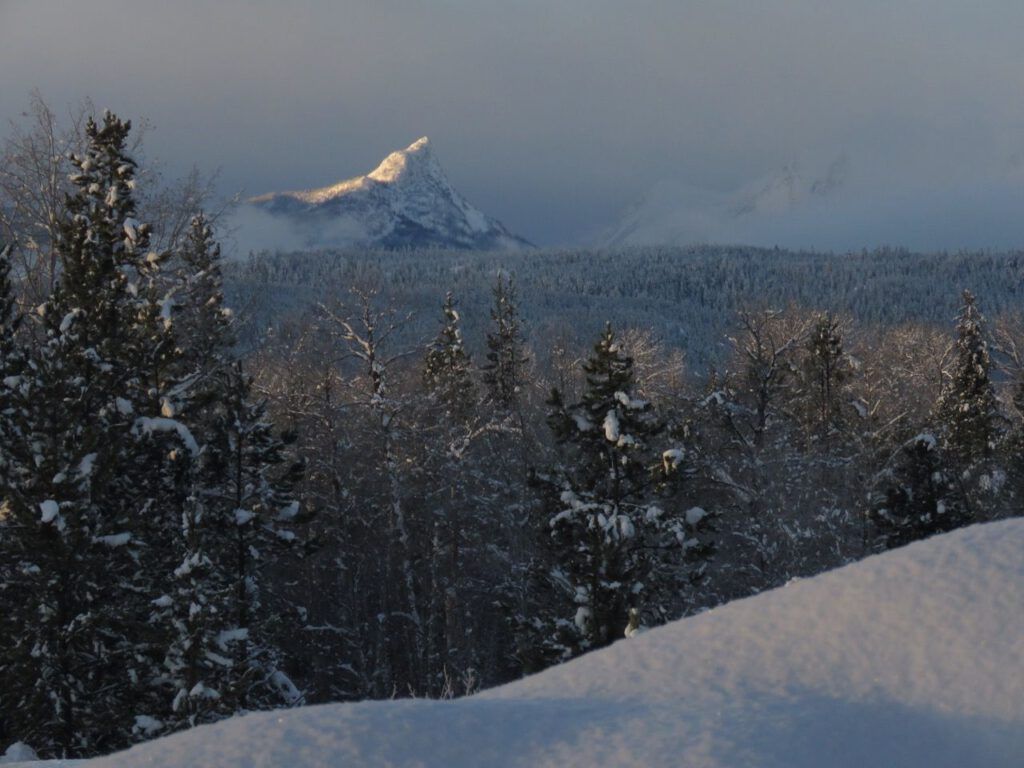 I have driven to Tatla Lake a time or two, and right in the middle of the site of the Kleena Kleene fire, I have seen smoke puffing up from the same spot at least four times since November.  Every time there is more snow I think that will be the end of it, but on January 22nd, there it was again. 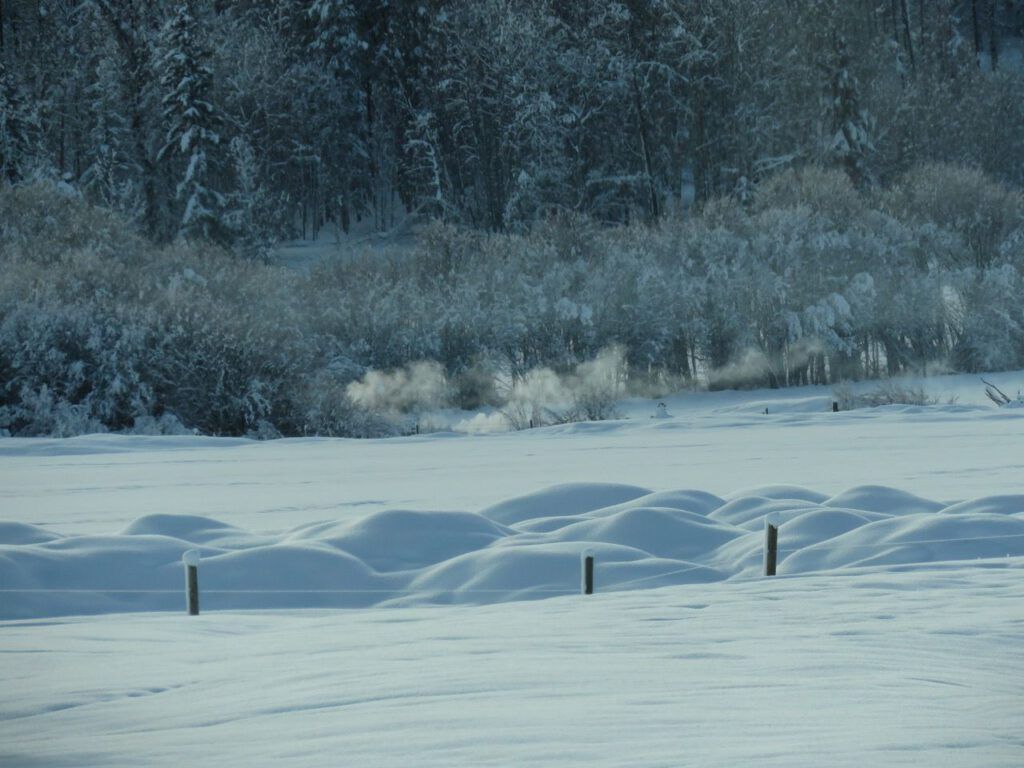 All of us locals are puzzled by this.  The absentee rancher who owns the field grazes cows there  in the winter, and they are held in place by electrified fences, so  it is not an easy undertaking to get over there to investigate.  Some suggested a squirrel cache – duff would go way deep if it was, but squirrels generally like to build at the base of a tree.  Others have theorized that there is a bit of peat at the bottom of what appears to be a wetland judging by the belt of willows.  Peat can burn for years – even ice-covered Greenland is on fire! 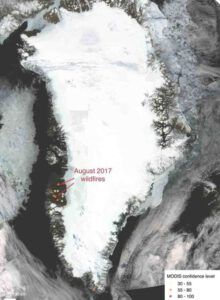 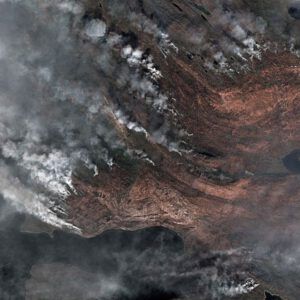 Coming back from Tatla Lake that afternoon. I crossed the upper part of the Klinaklini River.  This was the exact place where I first smelled smoke on July 7th, the day that our fire started.  I can never – probably will never – go past this spot without thinking about it. 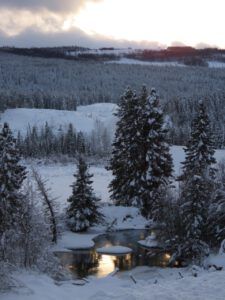 It is probably particularly lodged in my mind right now as I am putting together a book about the fire, using both my experiences and those of others, and all of us are still highly charged when telling our stories.  (Don’t get too excited: it will likely be a couple of years before it is published.)

Because of the persistent cloud, particularly in the south and west, it has not been possible to measure the sun’s journey as it sets.  This brief glimpse shows that it is already clearing Finger Peak (having set to the left of the trees on the shortest day.) 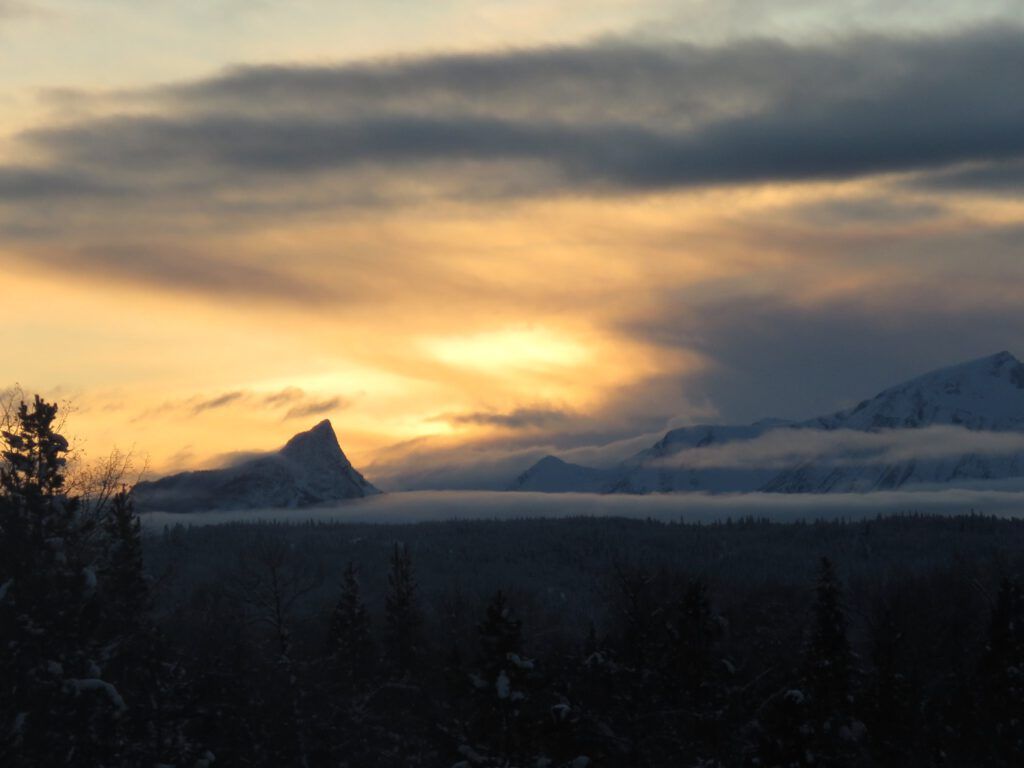 Diligent ploughing of Highway 20 plus the almost thawing afternoon temperatures on the way to Nimpo Lake have covered the surface with ice. 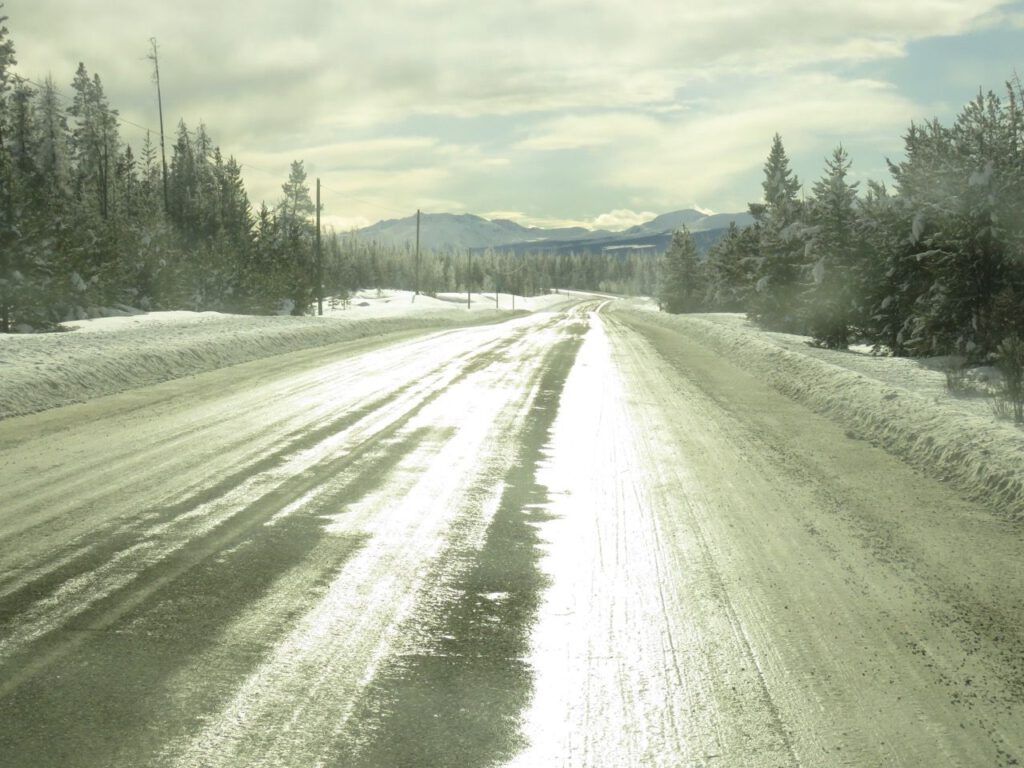 Finally we started getting a bit more sun. 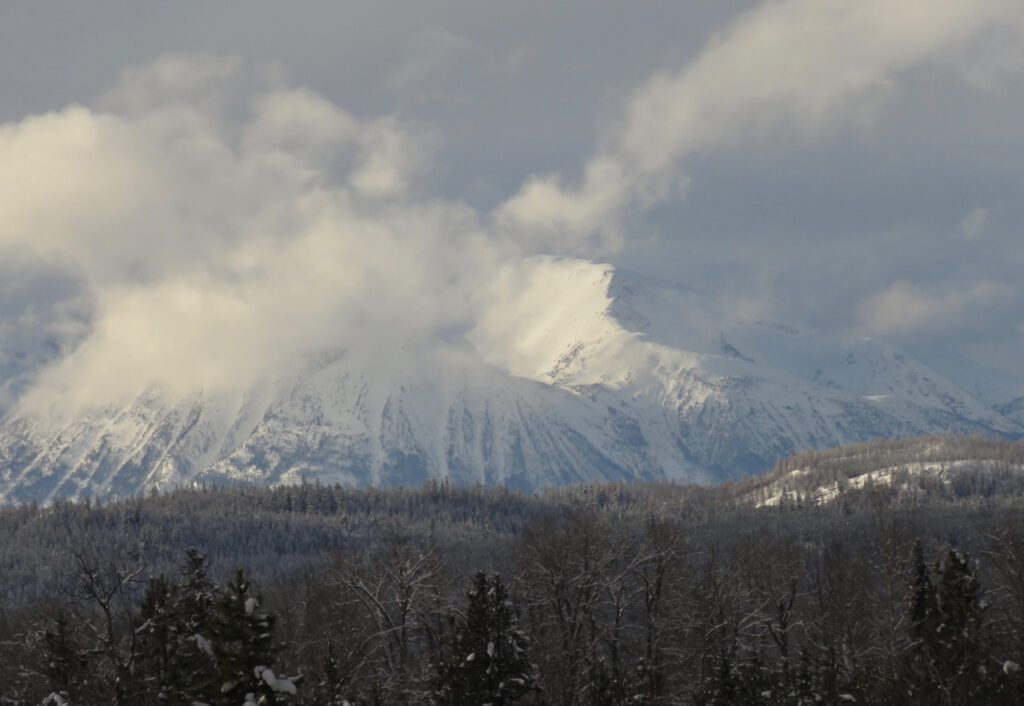 Snowshoe trails are having to be broken anew. 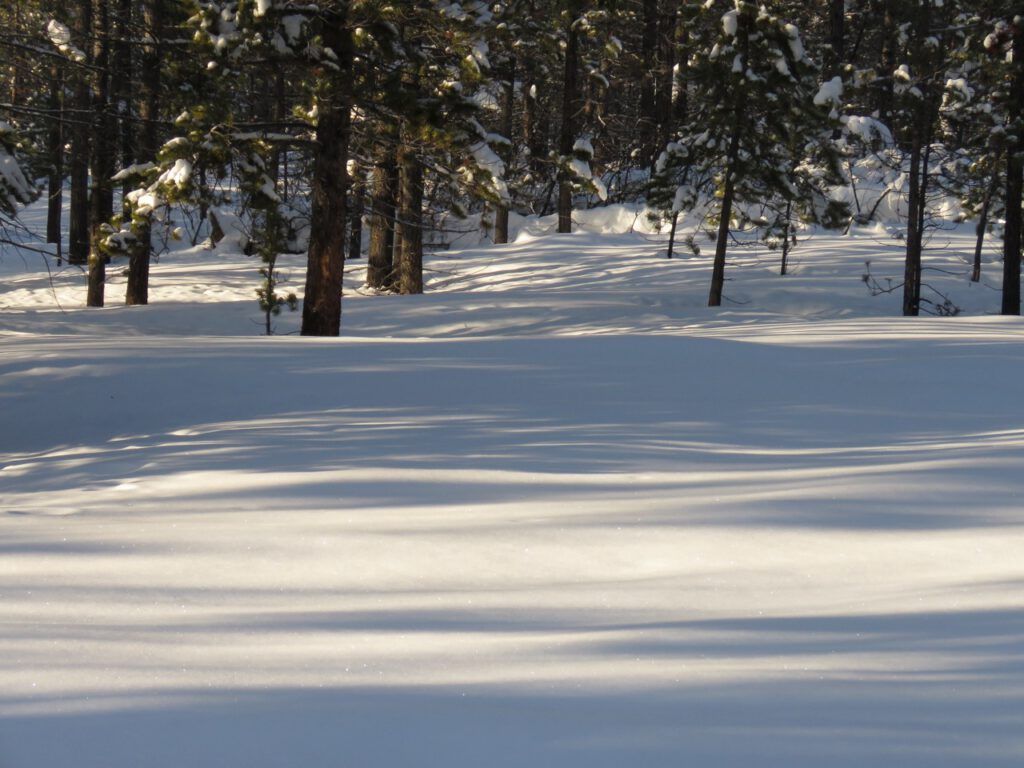 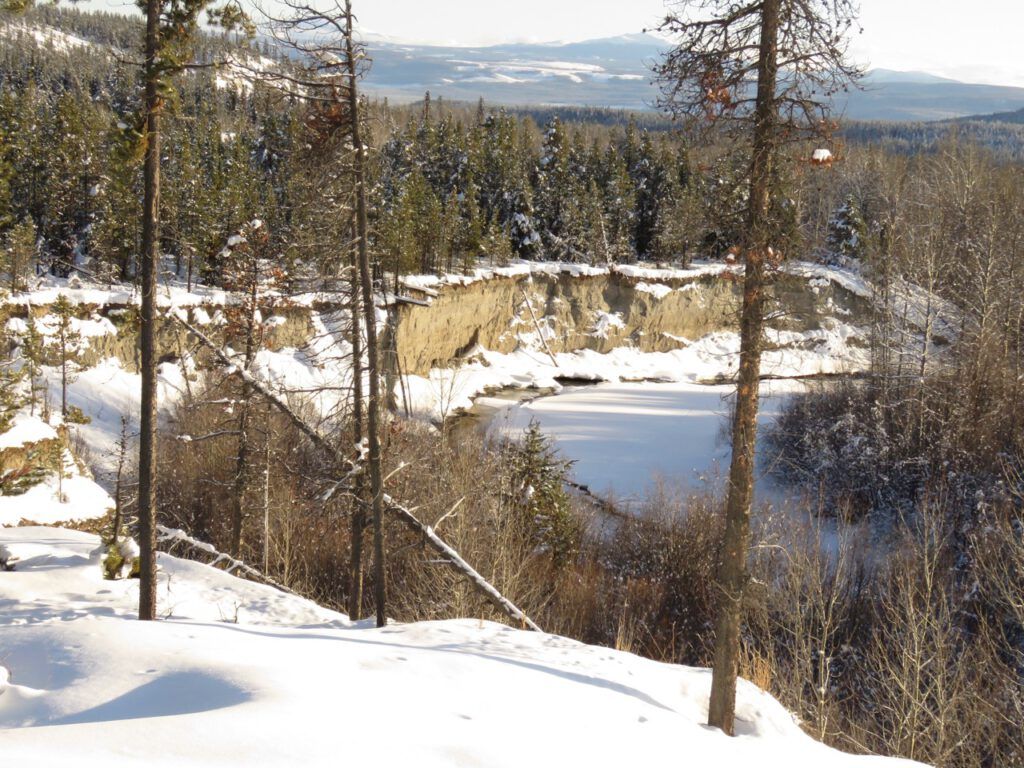 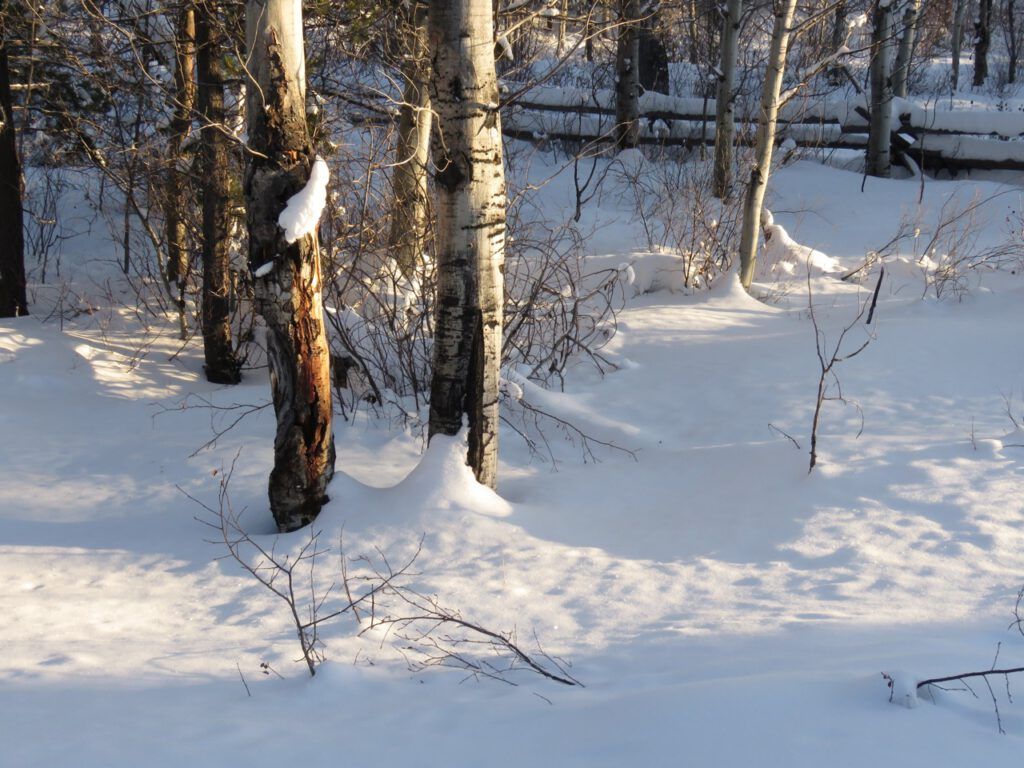 Here is the growing moon heading for its rendezvous with the sun’s shadow. 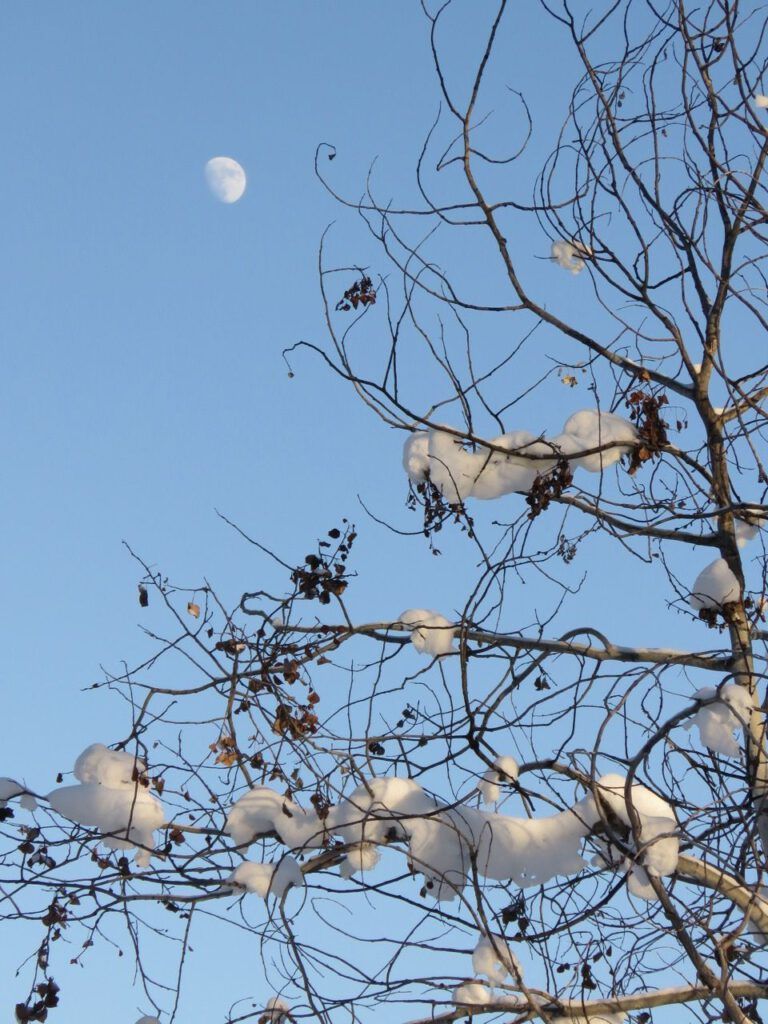 I have spent a lot of time ploughing with my ATV.  The road has gradually been growing narrower.  I had to do sideways runs at the banks to try and push them back a bit.  Because of lack of space, the runs were very tiny, and in a lot of cases, where there are dirt banks under the snow, I could not budge the sides.  The one kilometre to where  my road joins the neighbour’s took two days.  The shared road had not been ploughed for a while and was getting quite difficult to drive.  The neighbour has a school-age child and I could see by the tracks that he was using a snowmobile to take the child to the bus.  In the end I asked another neighbour to bring their tractor.  These neighbours are temporary, two Swiss women who are caretaking the Terra Nostra Guest Ranch.  They think driving the tractor is fun! 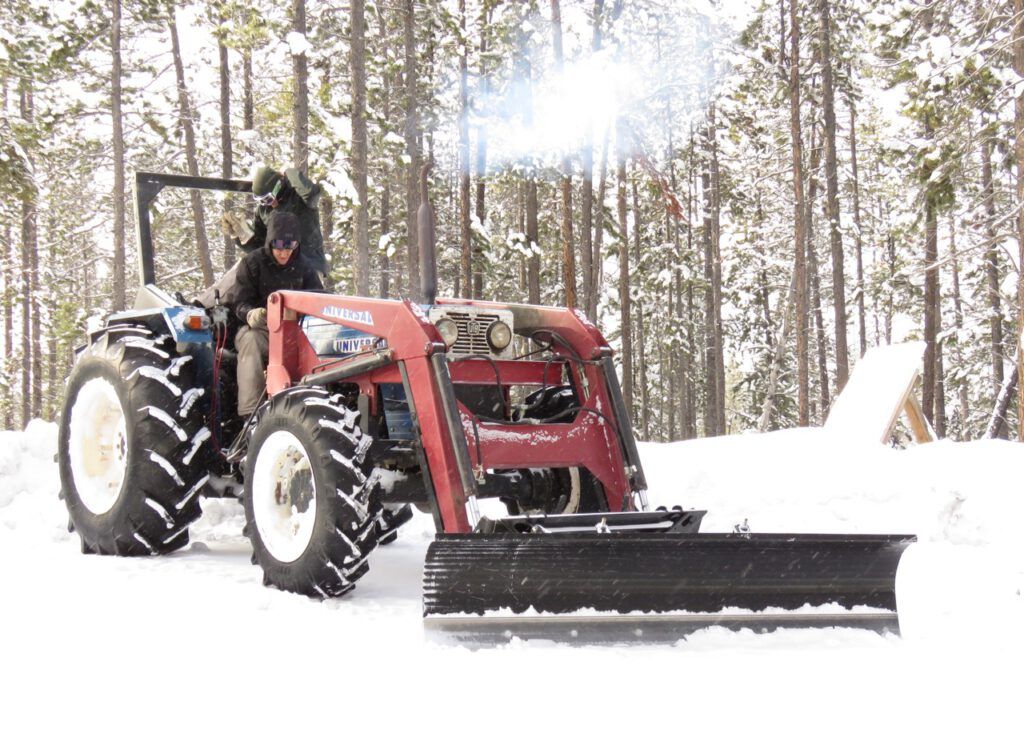 That evening the sky cleared briefly, and I could mark the sundown point. 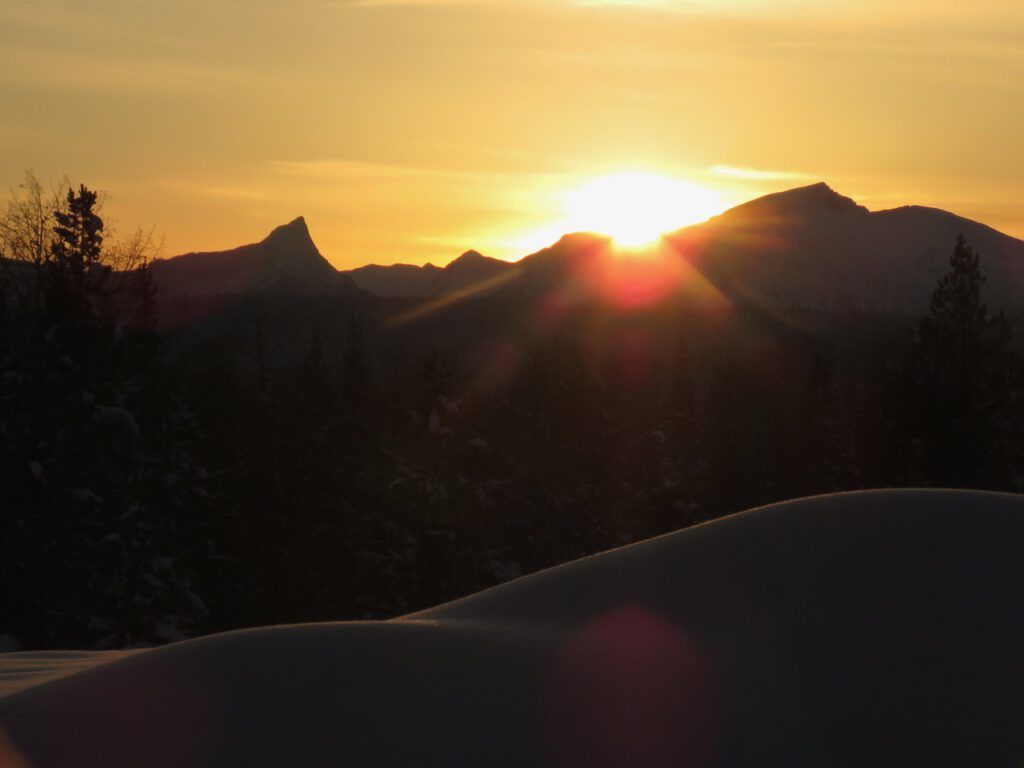 By morning, it was snowing again. 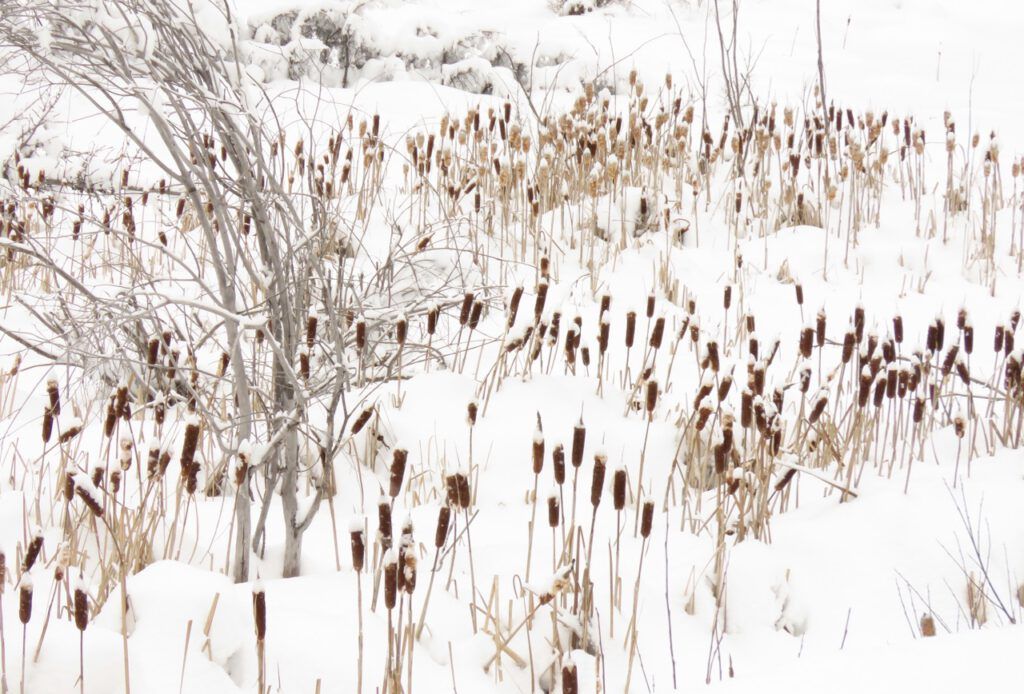 This last week, I have had a new visitor to my bird feeder.  A red crossbill.  Note the extraordinary beak, evolved to pry open cones. 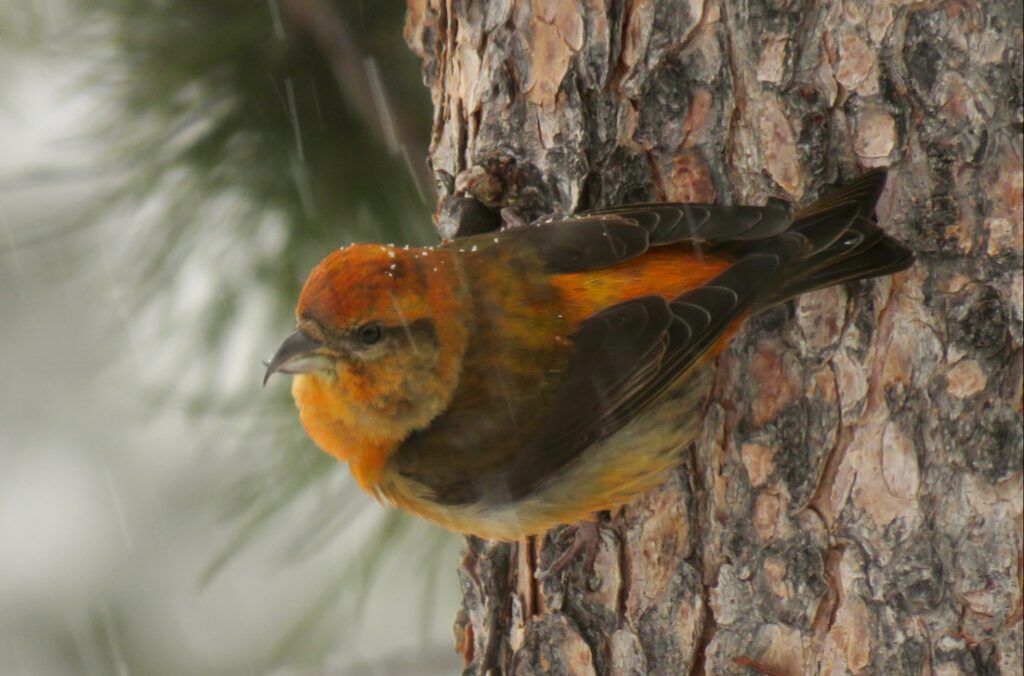 It is larger than the redpolls, but quite a bit smaller than the Grossbeak. 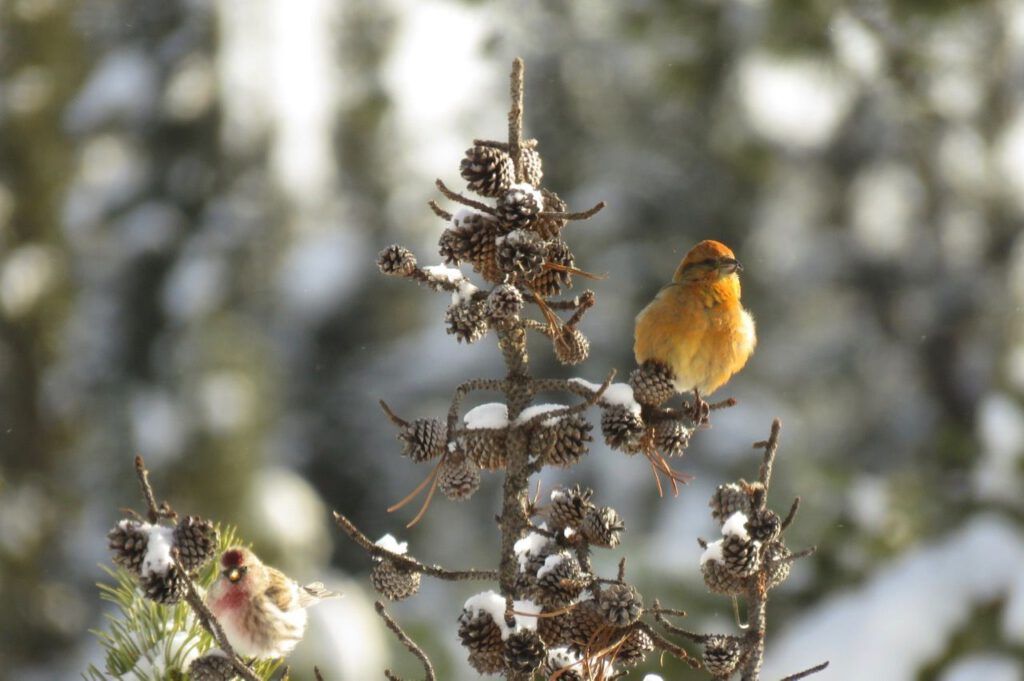 One of my bird books (Sibleys) says it is uncommon (but it is an old edition so often out of date).  Wayne Campbell et al’s Birds of BC says that in some areas it is very common.  Both books state that it goes around in flocks.  I have seen it only five times in my life to date; on one occasion there were two together, but on the other four occasions, they were alone.