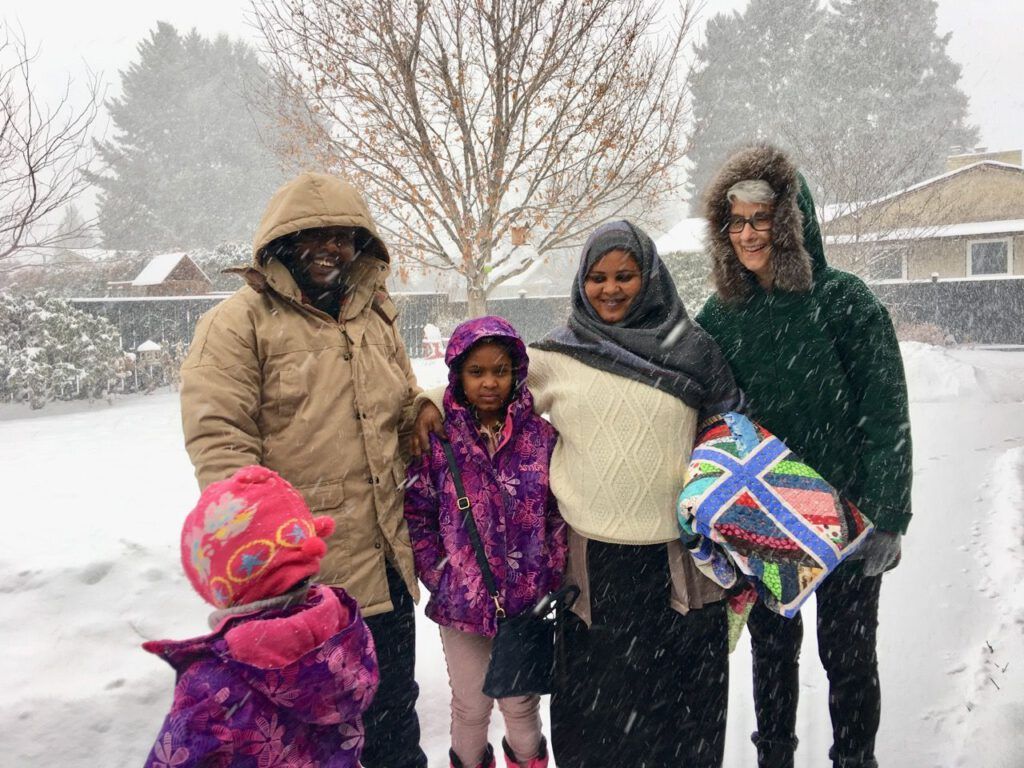 February at Ginty Creek has brought a big change in our lives.  For two and a half years, a group of Tatla Lake people have been working to try and host a refugee family.  Red tape has knocked us back time after time – then suddenly, we were told in late January, that a family was arriving for us in Kamloops on February 15th. Hussein was raised in Eritrea but has lived in the Sudan for 18 years, and his wife Hussna and two girls (age 7 and 10) were born there. They stayed two days in Kamloops while they shopped for winter clothes and food – and learned how to play in the snow! 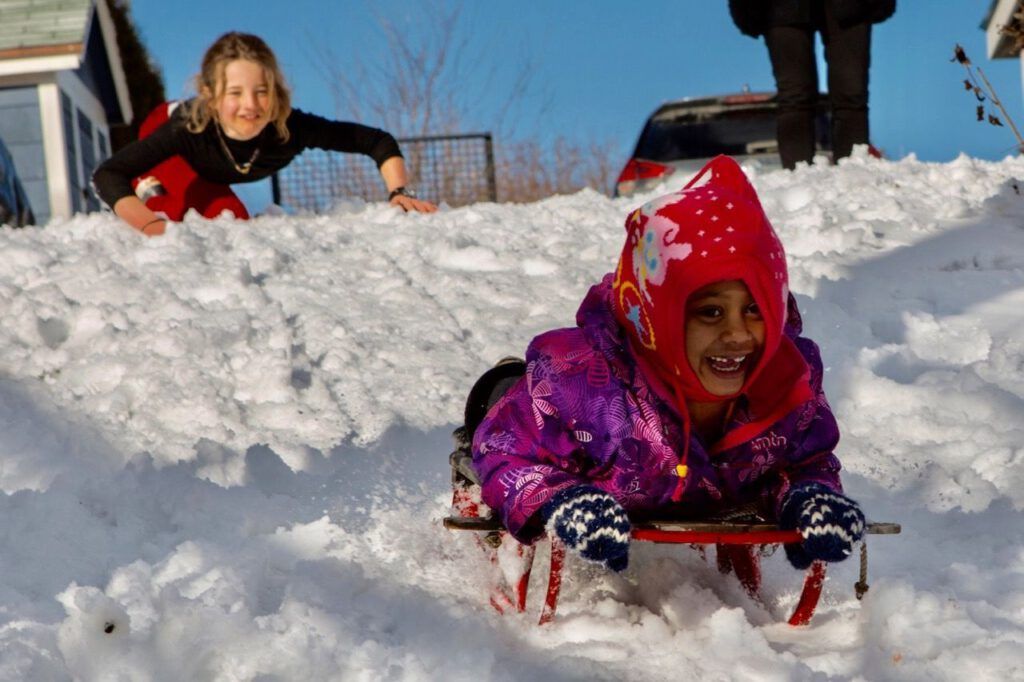 It was quite warm in Kamloops (notice the Canadian boy’s clothing!) but their journey of many days was not yet over.  They were taken to Williams Lake to open a bank account, then driven across the Chilcotin. 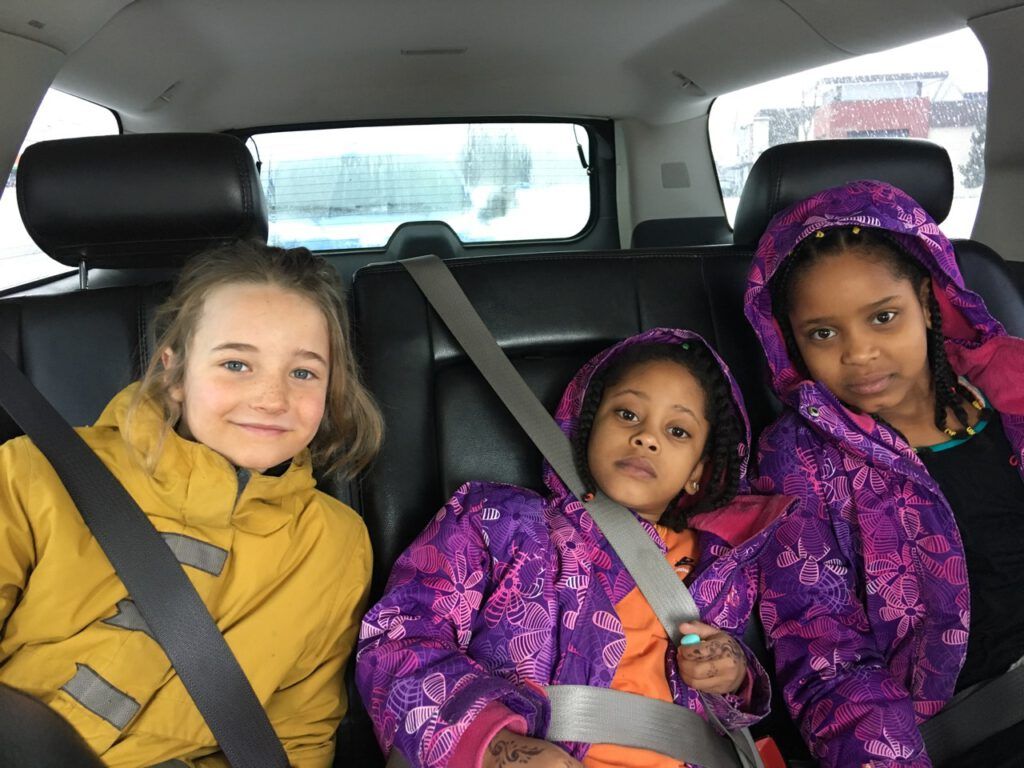 Unfortunately, during their journey, the temperature crashed.  They were pounded with a wild snowstorm, and on their first night the temperature dropped to -28C.  On their second night, we had the coldest night of the winter. 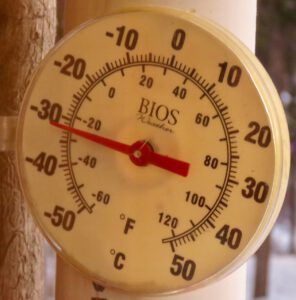 Hussein speaks a few words of English but not enough to carry on a conversation. The other three know none.  The mother, especially, was horrified at the lack of people around them and the huge number of trees.  However, the children are already in school and the community is taking them to their homes to visit, and a group of us is helping to teach them English.  They have been in touch with Hussna’s cousin in San Diego, a one-time refugee who is now employed to help other refugees, and he has told her to try and stick it out – he said that she doesn’t know how lucky she and her family are to have one-on-one help – in a city they would wait months for English lessons and even then probably learn nothing as they would have a community of their own kind to fall back on.  So I hope we can make them a bit happier.  They first applied for refugee status 10 years ago.  It must seem a terrible wrench that, having got here, life will still not be easy for them for some time.

February at Ginty Creek has raced by.  I have been late posting this as I have been extremely busy with a lot things.  The new family has taken some time (meetings, learning how to teach ESL, general entertainment) and I have been chasing up locals to get their version of what happened to them during the fires for my fire book.  I have some great stories.  Also, the school has decided to do another play – Jungle Book this time – and I am already embroiled in plans for the scenery.  Fitted in amongst this is – Income Tax (groan!)  Despite good intentions every year, I always leave it until the last minute and it takes me days.

Earlier in the month, I had some city friends visit.  I took them out on snowshoes. 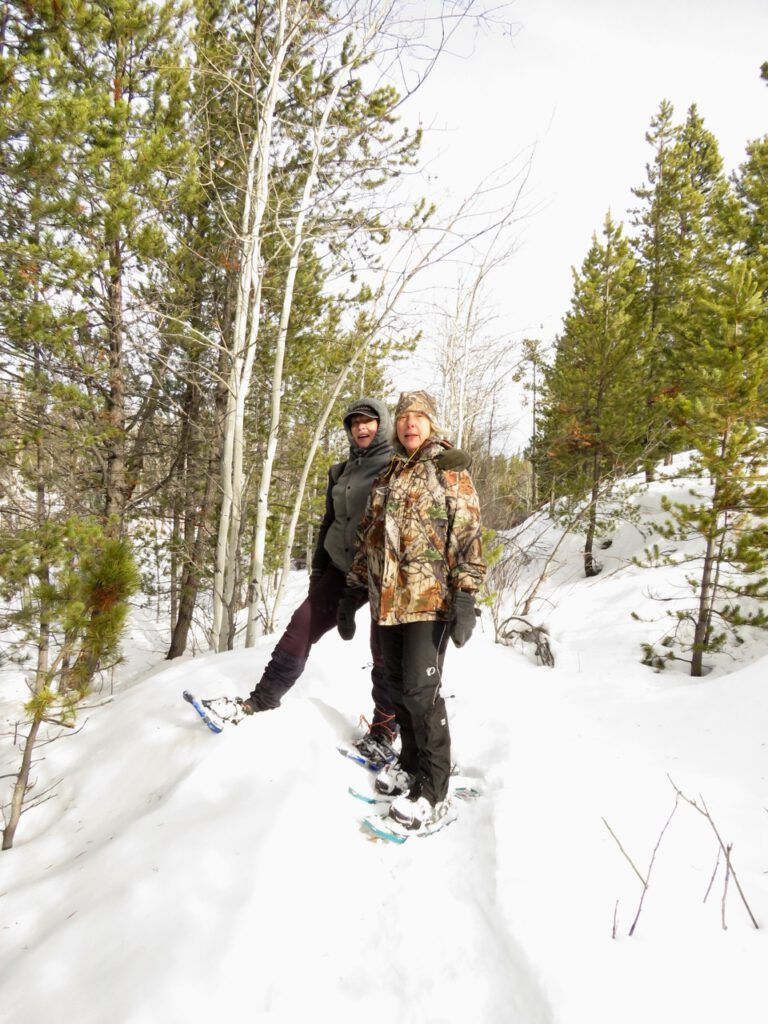 All went well for quite a while, then Sabine did a face plant.  I was quite a way behind them and was laughing so hard I could hardly take pictures.  Donna tried to pull Sabine up by her backpack. 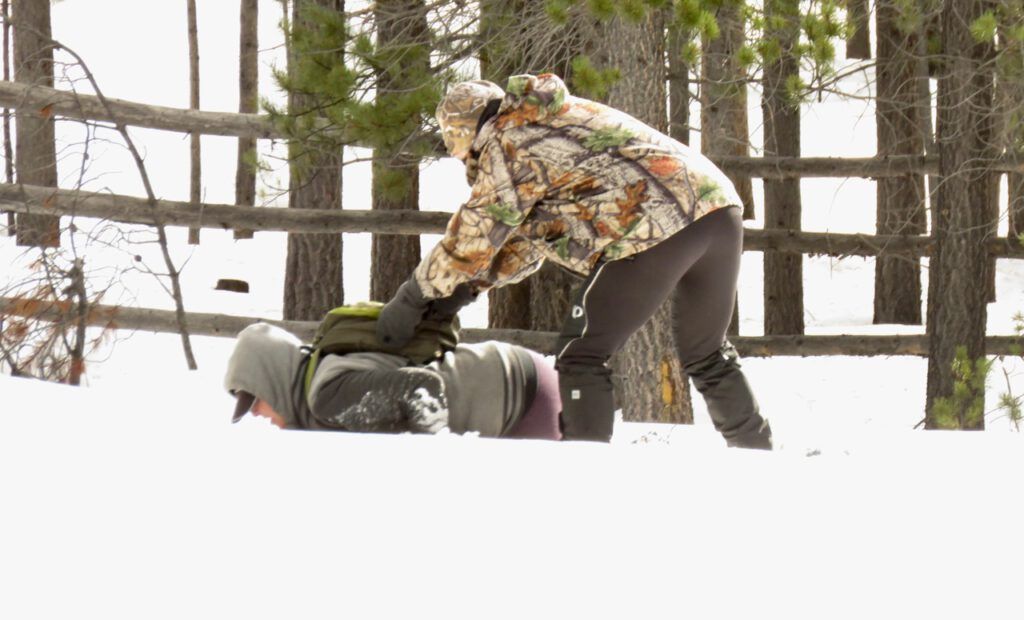 That wasn’t going to work and she didn’t quite know what to do. 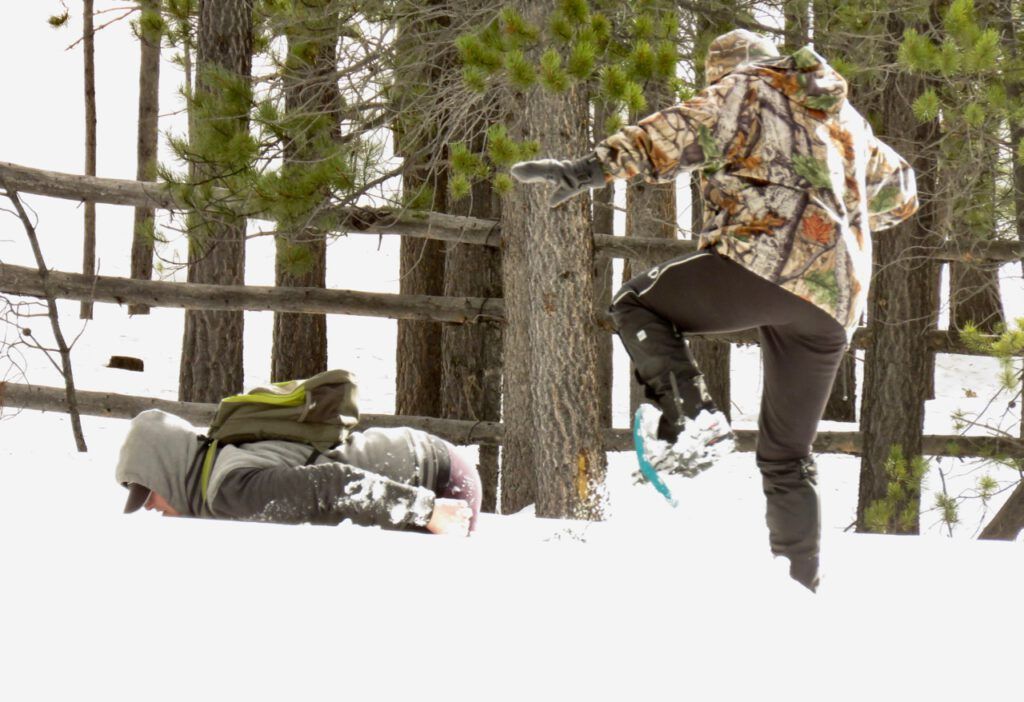 So she thought she might as well take a photo! 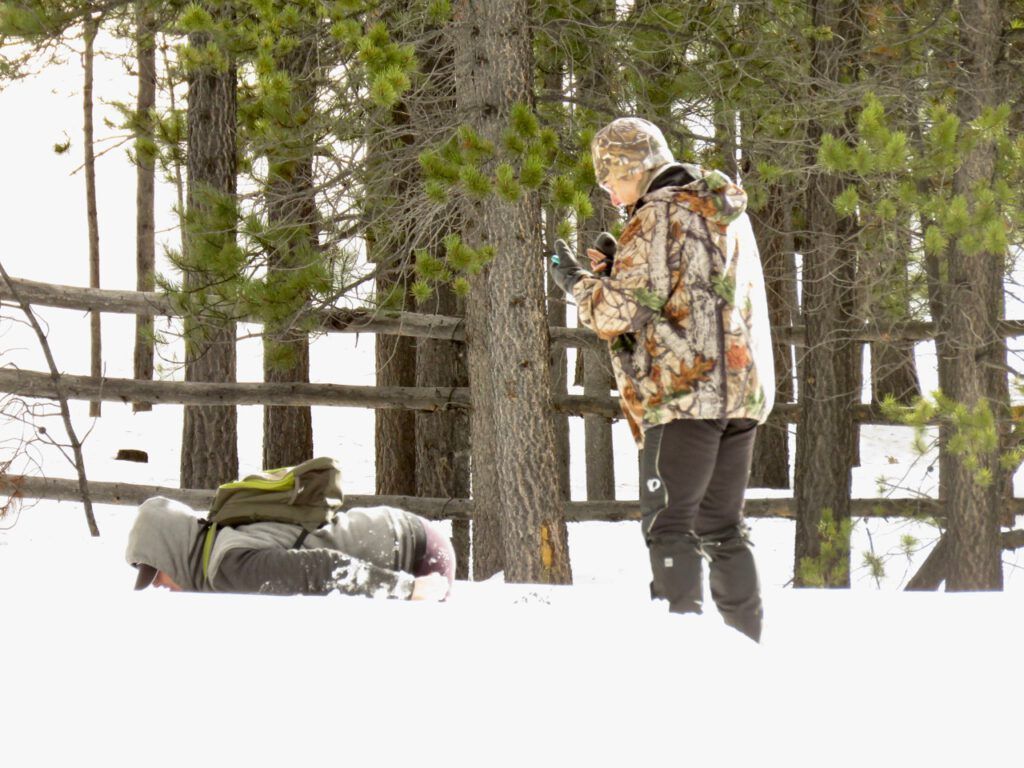 But as I came up to them, Sabine was rescued. 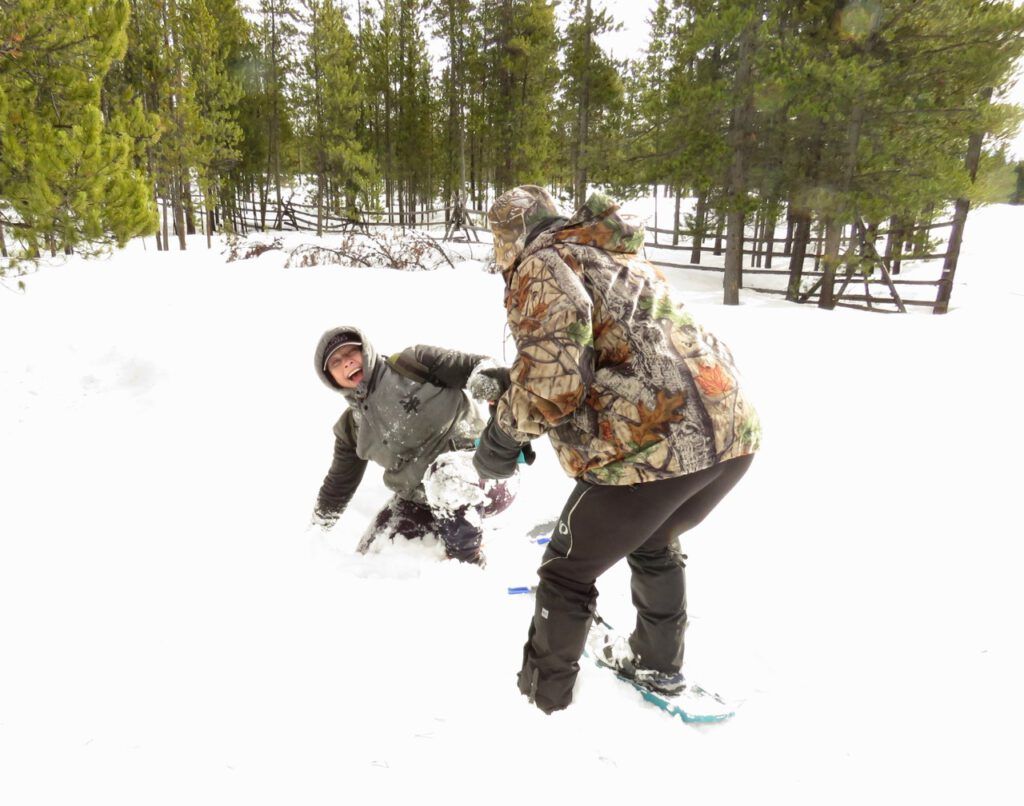 We’ve had a number of brilliantly sunny days. 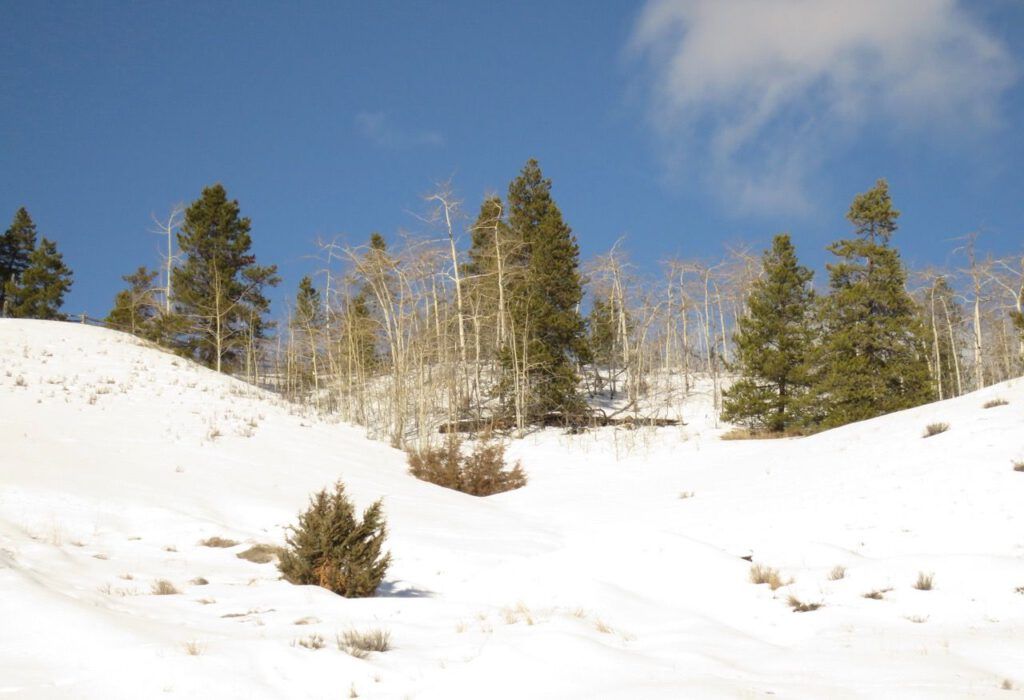 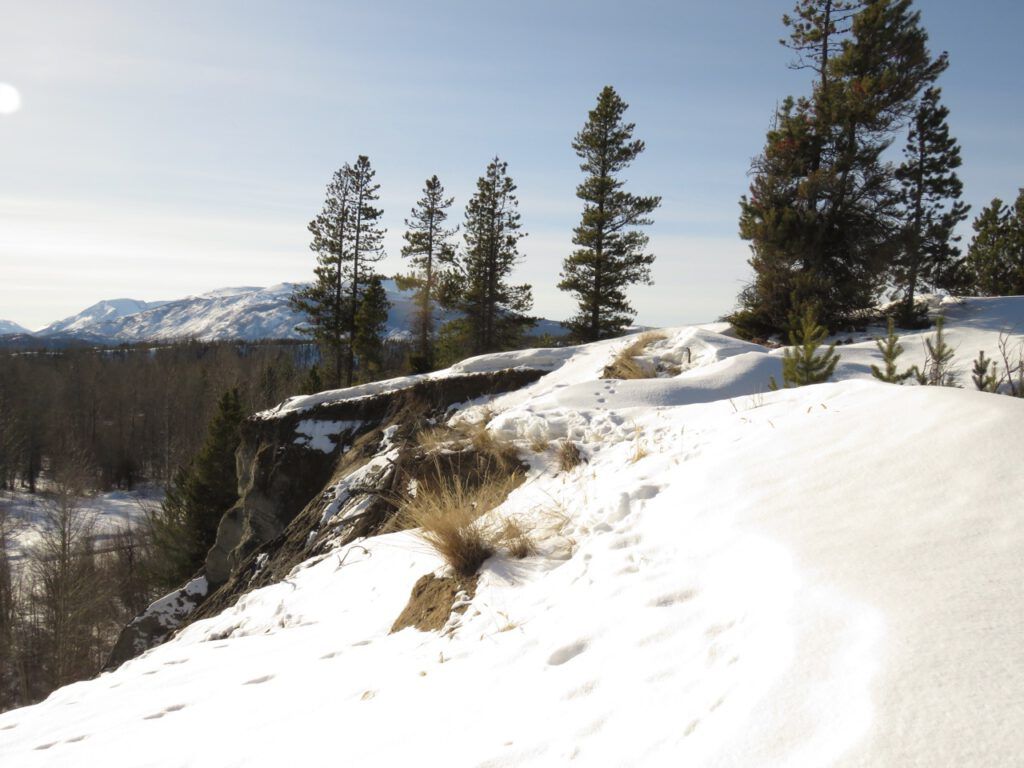 But rarely has the sunset been cloud-free.  On this rare day, around the middle of the month, the sunset point had travelled to between Middle Mountain and Nogwon.  Now it is not far from the top of Nogwon – when it climbs over, it will be the Equinox. 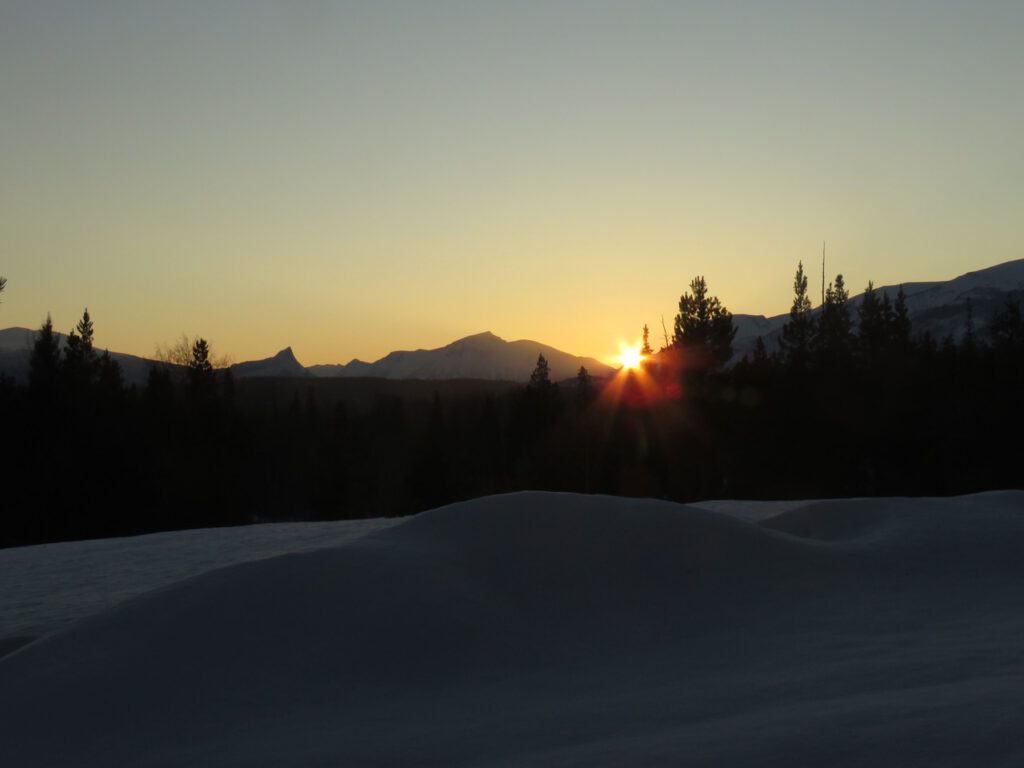 The clear weather never lasts long.  One morning we had a very weird pink light. 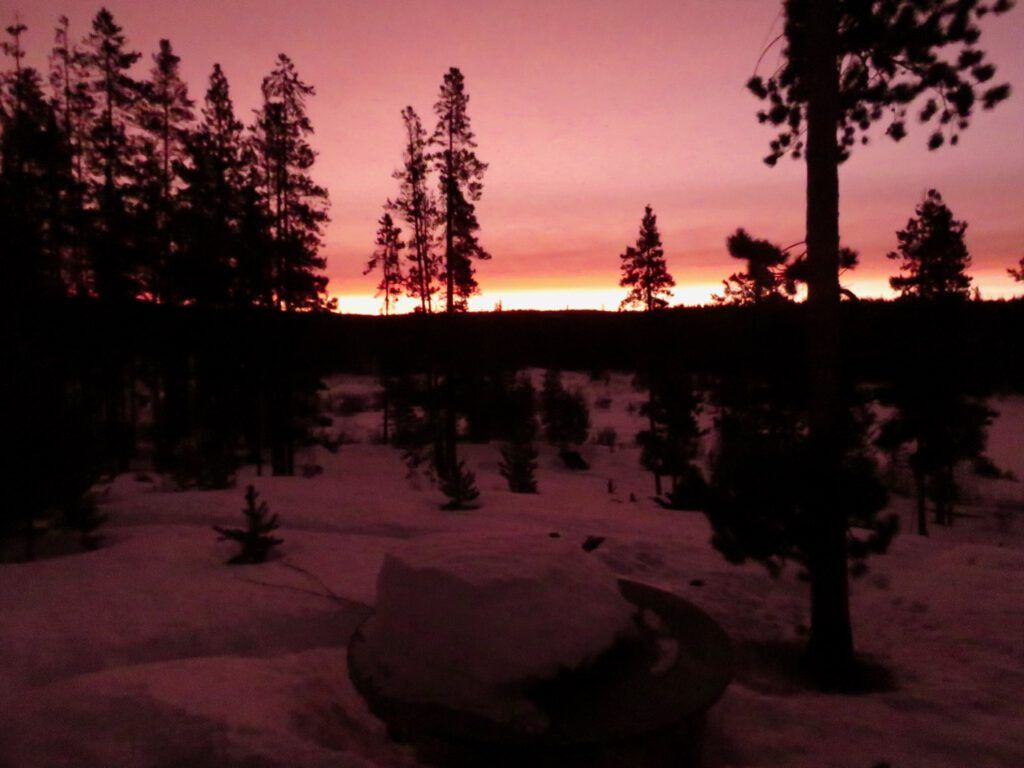 And it keeps snowing. 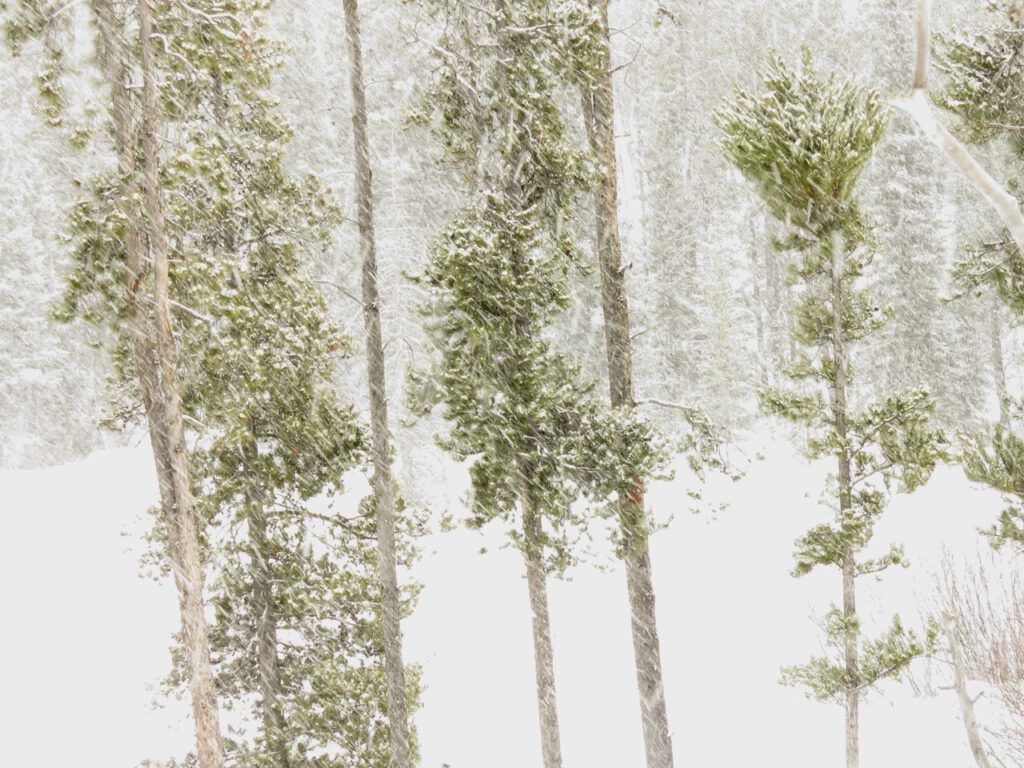 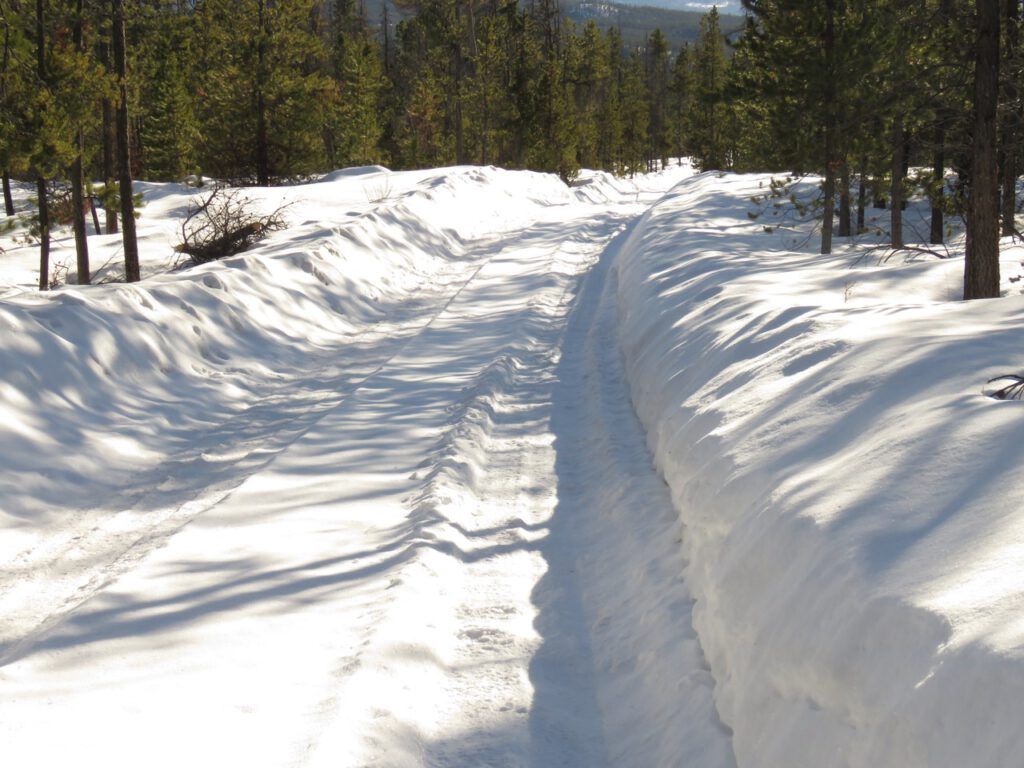 Latterly, we’ve had some pretty wild winds and the snow blows, right in the yard. 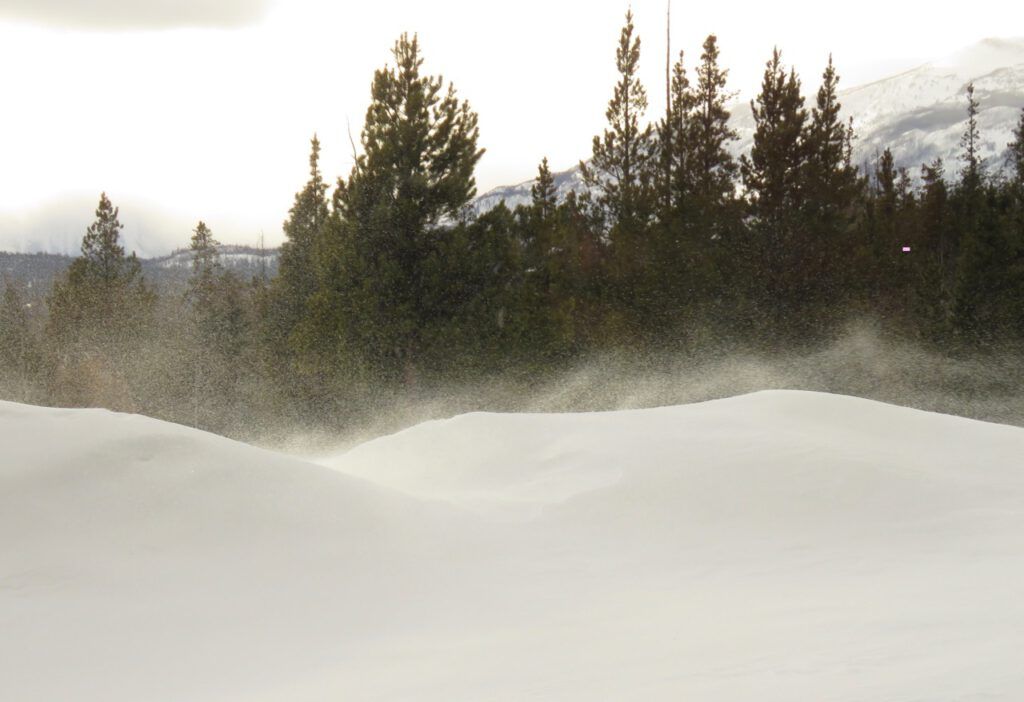 The other day it blew all night and was still blowing at sunrise.  You can see the top of Nogwon is quite fuzzy. 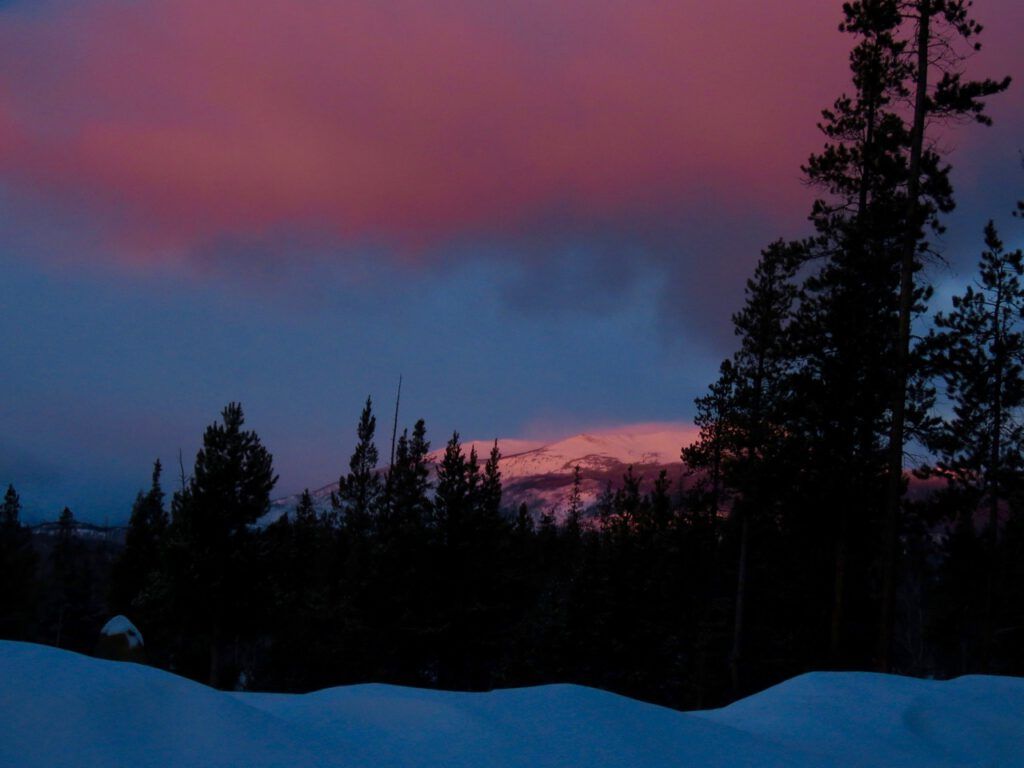 Even when it is cold in the morning, it often thaws for an hour or two in the afternoon.  Once we even had rain. 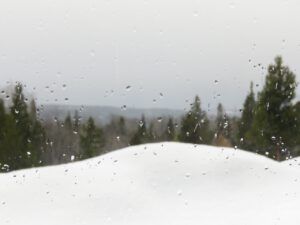 When the temperature climbs in the afternoon, my thoughts turn to gardening.  But there is a long way to go yet. 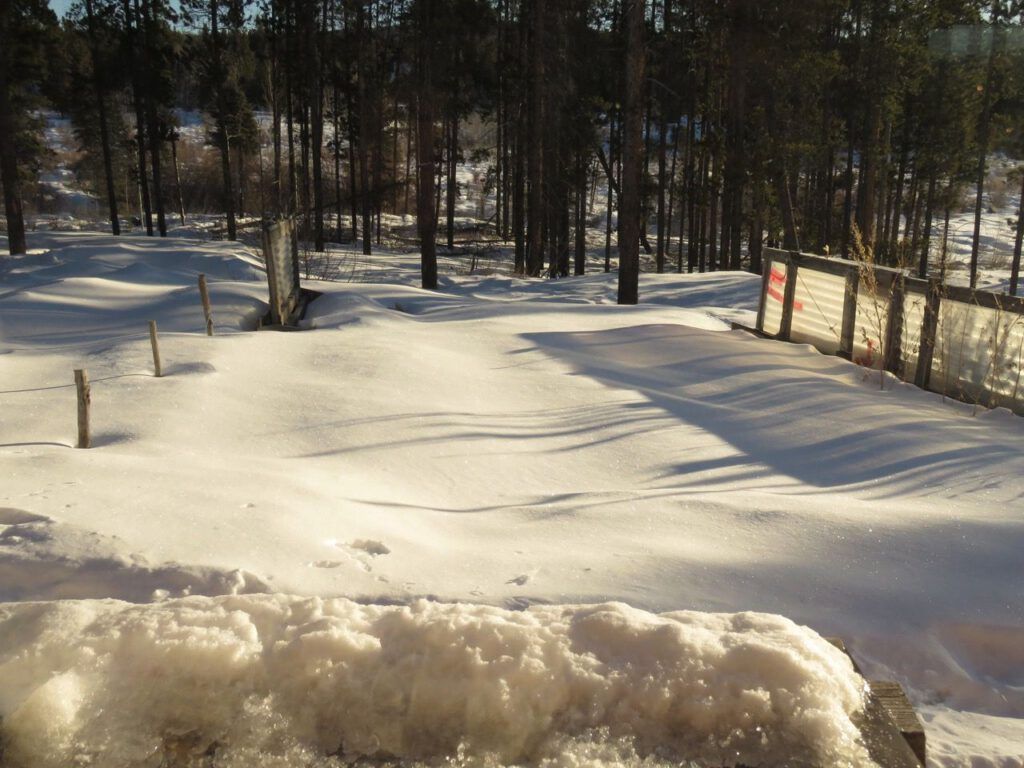 The birds are going through three soup cans of sunflower seeds a day.  Near the beginning of the month, a second red crossbill arrived.  The books all show a solid colour, but this guy is quite blotchy.  He is much redder than his buddy. 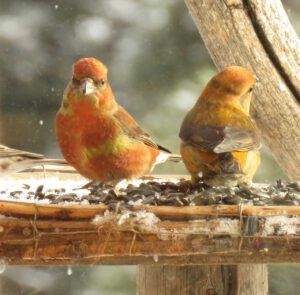 And, not too long ago, a female arrived.  They have to be the drabbest birds in the country.  Not even a wing bar to break the colour. (Note that the squirrel is still bring cones to the feeder now and then.) 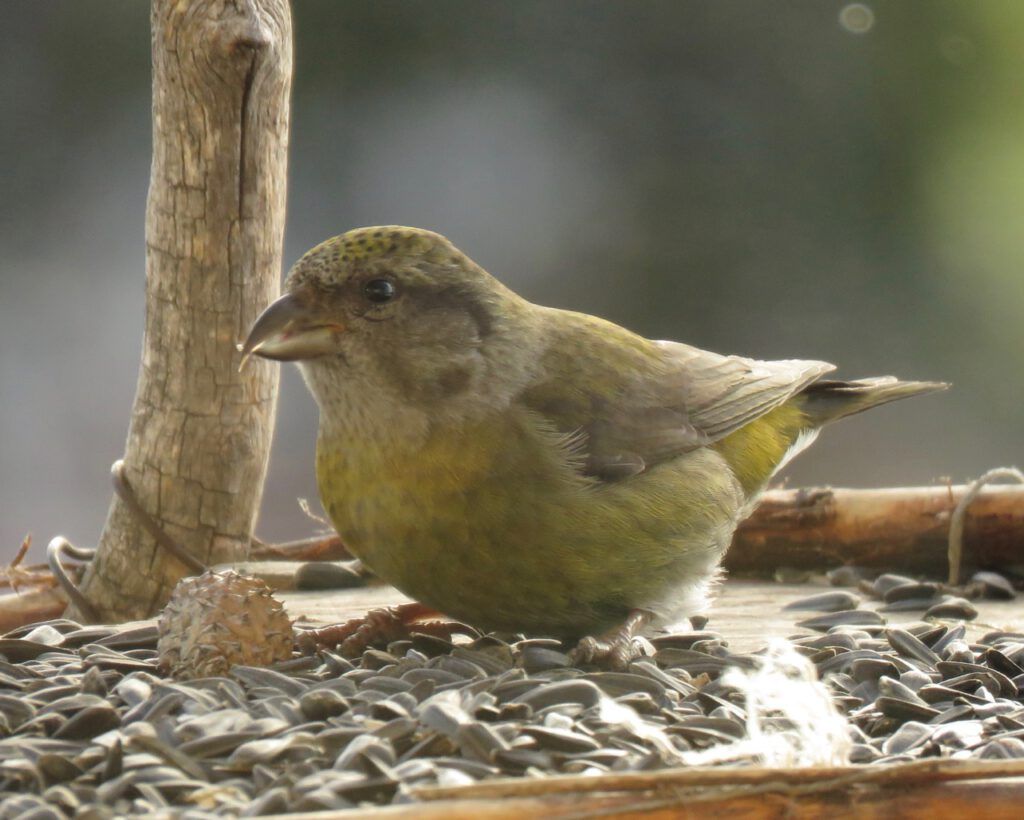 Our puffer in downtown Kleena Kleene is still making smoke at times.  (It is almost exactly in the middle of the picture.)  The Kleena Kleene fire started on the ridge behind it.  I have called it in to forestry.  They said it is not the only one and they are going to take a look at them all, probably in March. 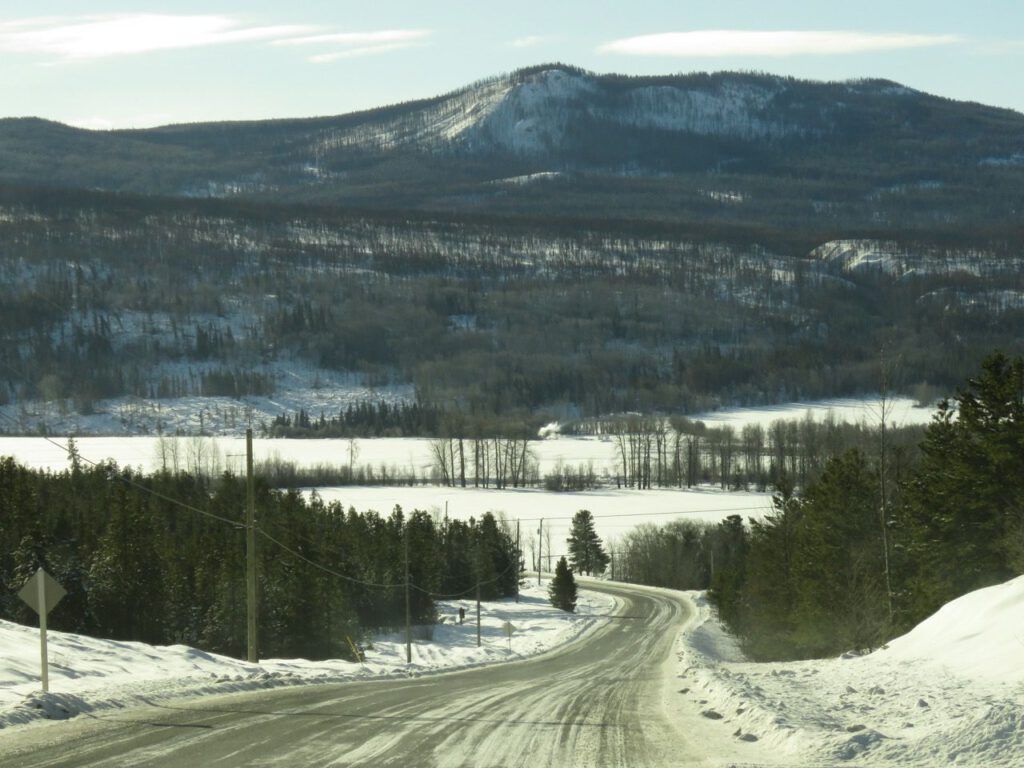 Yesterday, bits of fog hung about. 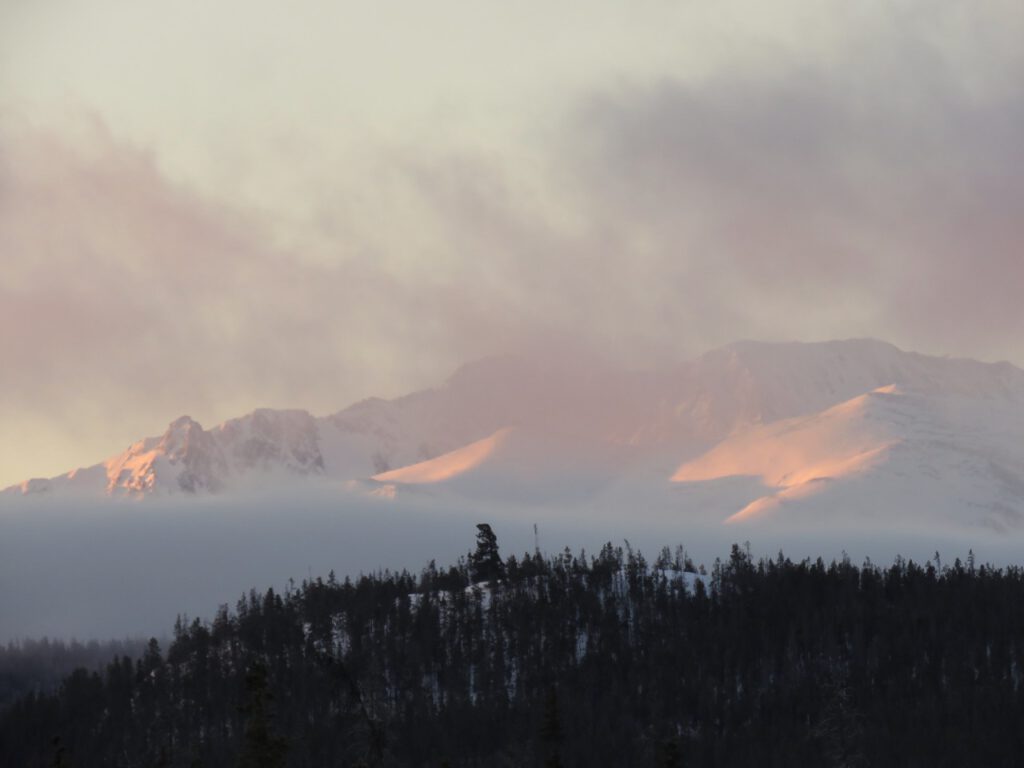 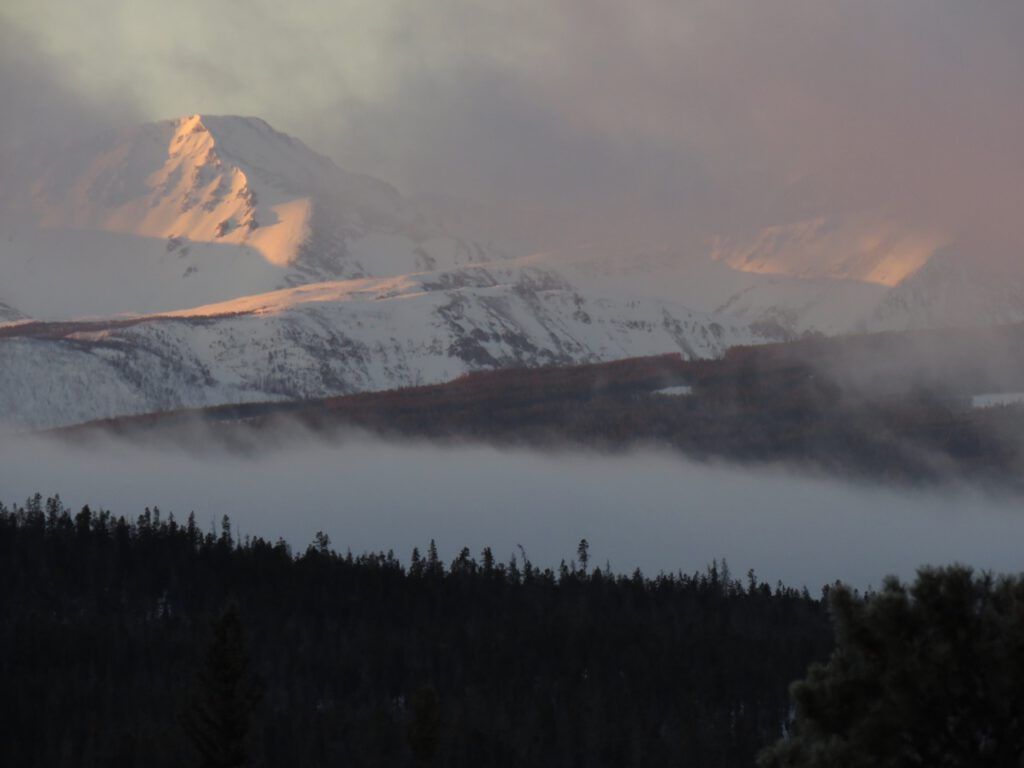 This morning, it was -23C and completely clear.

But now it is -1C and has clouded over and it’s blowing hard again.

7 thoughts on “February at Ginty Creek”