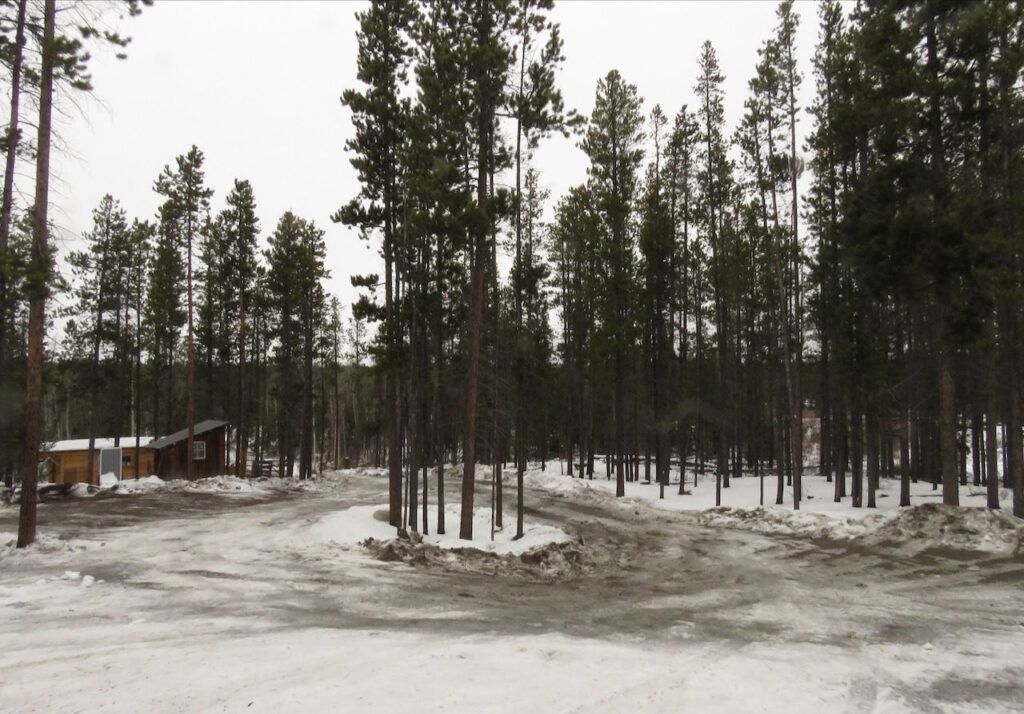 I always have a hard time with November.  It’s the greyness; the short days; the mess.

It started off well enough – sunny for the first two days after I got home from Harry’s Book Tour, but the second night the temperature dropped to -28C, which was a bit of a shock after the balmy coast!  Still, it looked gorgeous. 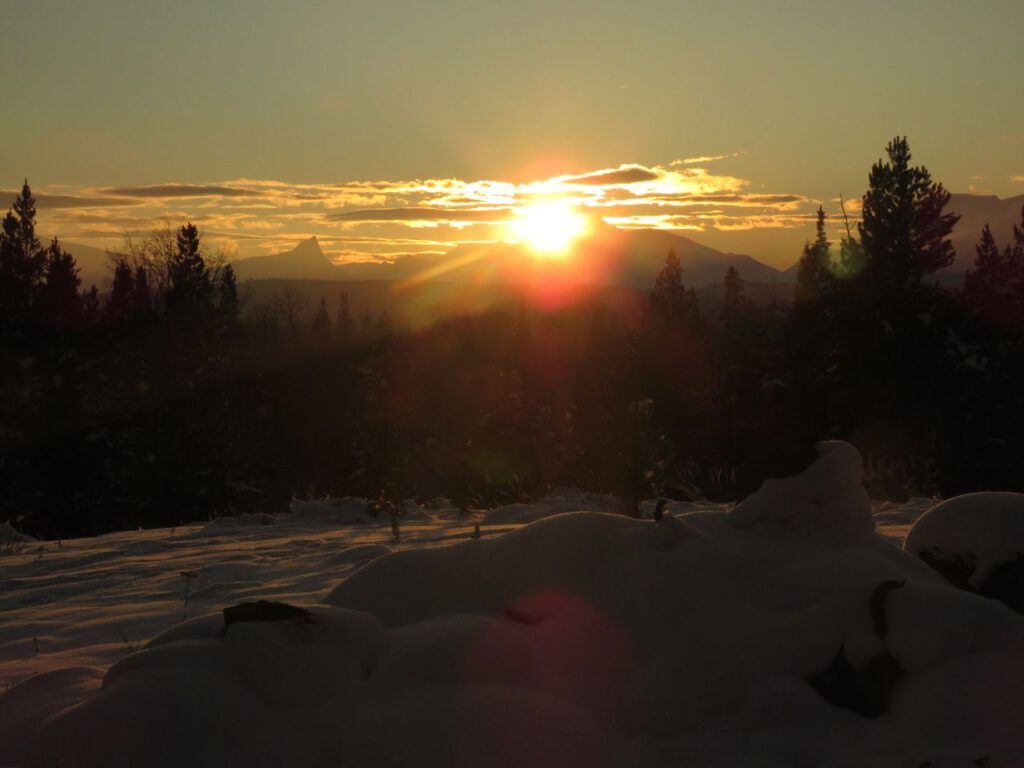 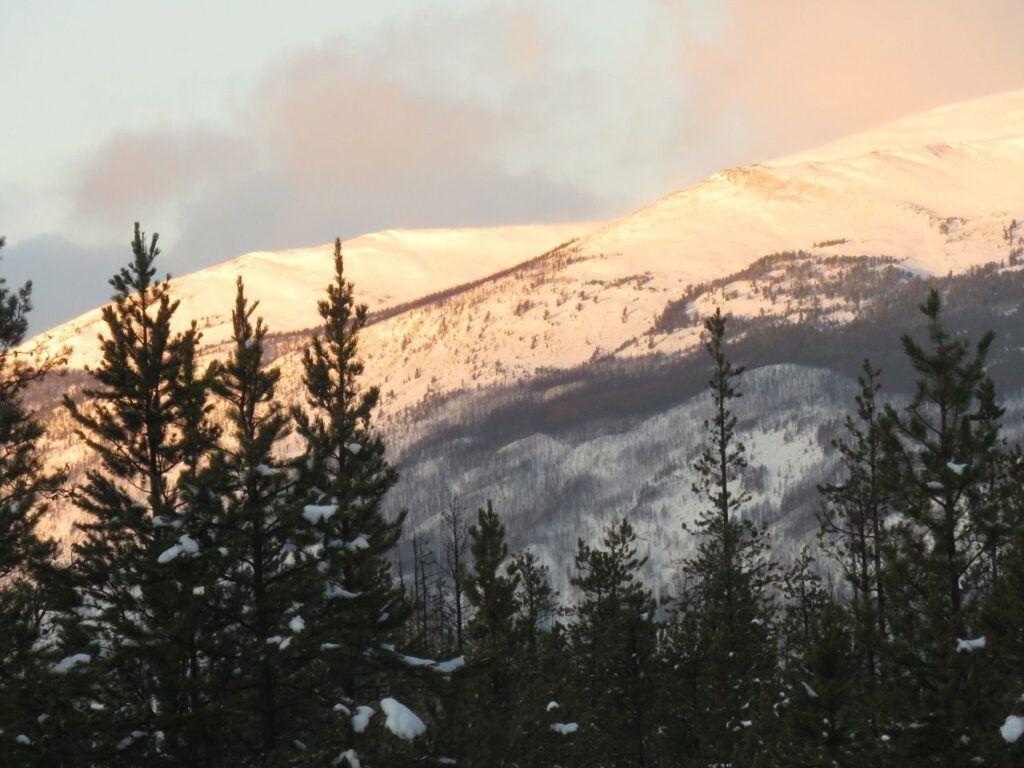 On this second picture you can see where the fire burned the slopes of Nogwon.  These pretty pyrotechnics, however, did not last beyond the first two days.

I measured 9″ snow and knew I had to do some ploughing.  I had scheduled an afternoon to fit the plough and chains onto the ATV before I left for the book tour at the end of September.  But it was a gorgeous afternoon and the fall colours were magical – I would be a fool not to go for a hike.  I don’t regret the hike but it means I was caught on the hop somewhat – everything takes three times as long in the cold and snow.  Then it was hard to get the chains on – then they kept coming off.  And as the temperature warmed and the snow got wetter, it became very hard to plough.  The ATV kept getting stuck; I had to keep shovelling and sometimes needed to fetch the pickup to pull the ATV out.  And these were little slopes – not the bigger hills of my road.  After 3 days’ major struggle I asked a neighbour to come and do the road part.  I then had to do a lot of shovelling to smooth off the corners – once frozen the plough would never be able to handle it.  The result was a skating rink that, now there is a bit of fresh snow on it, is a death trap.  I do not venture a step into the yard without ice creepers on my boots. Ploughing needs to be done very well the first time round so that subsequent snowfalls have room to be piled.

For most of the month we have had a mix of very wet snow and rain. 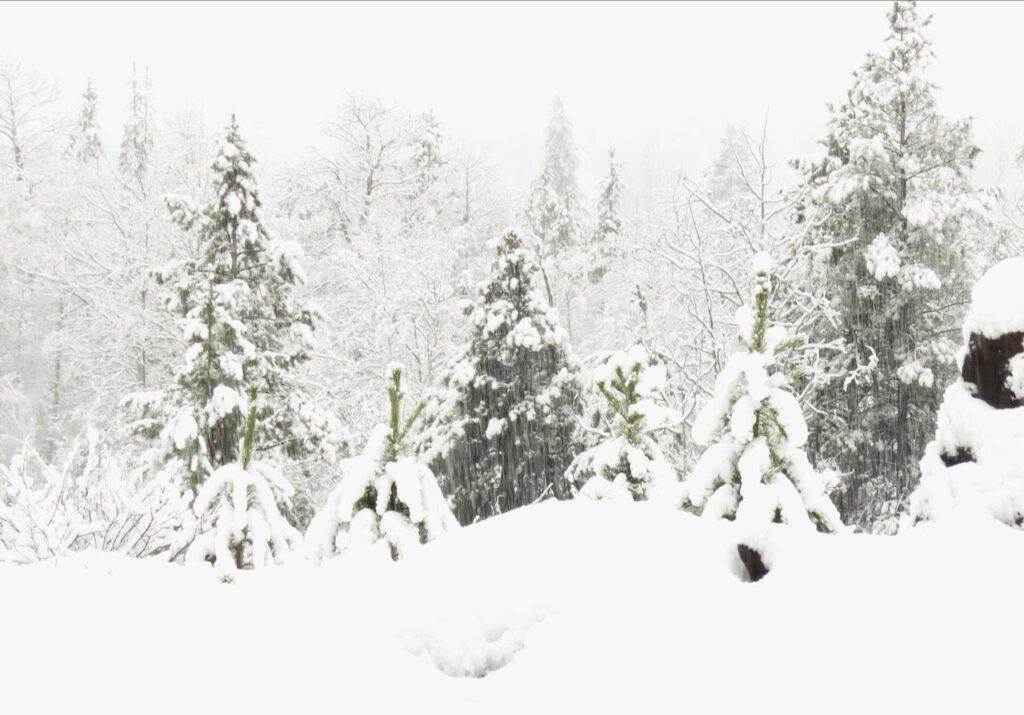 Pretty enough until it thawed. 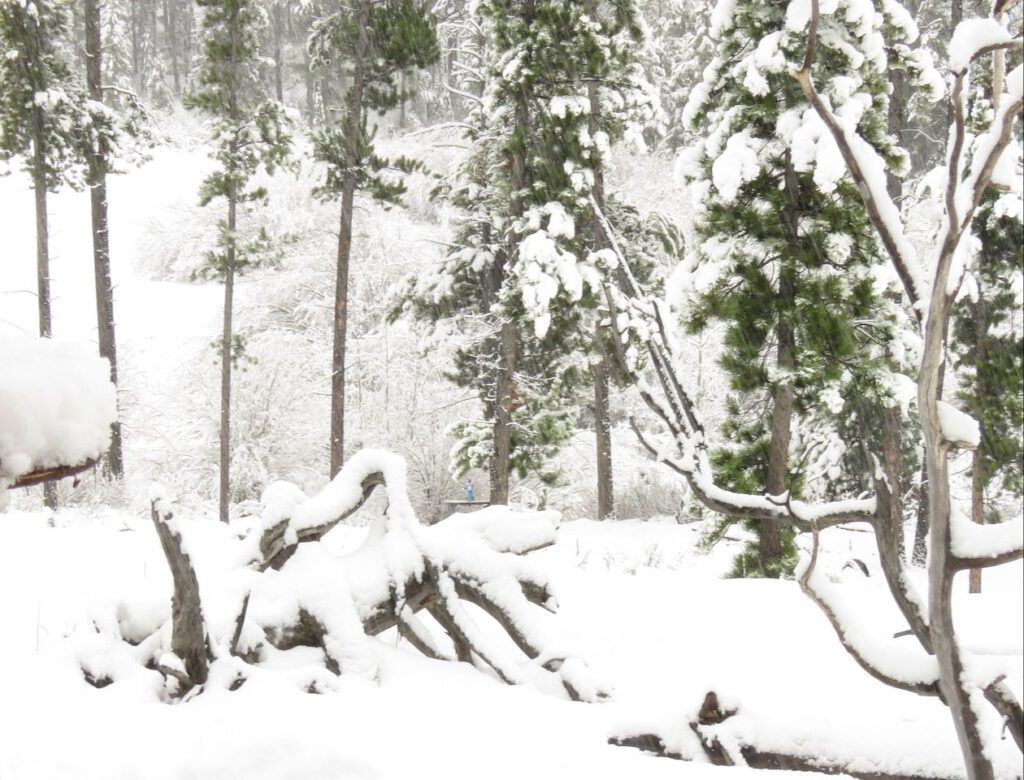 And a lot of grey. 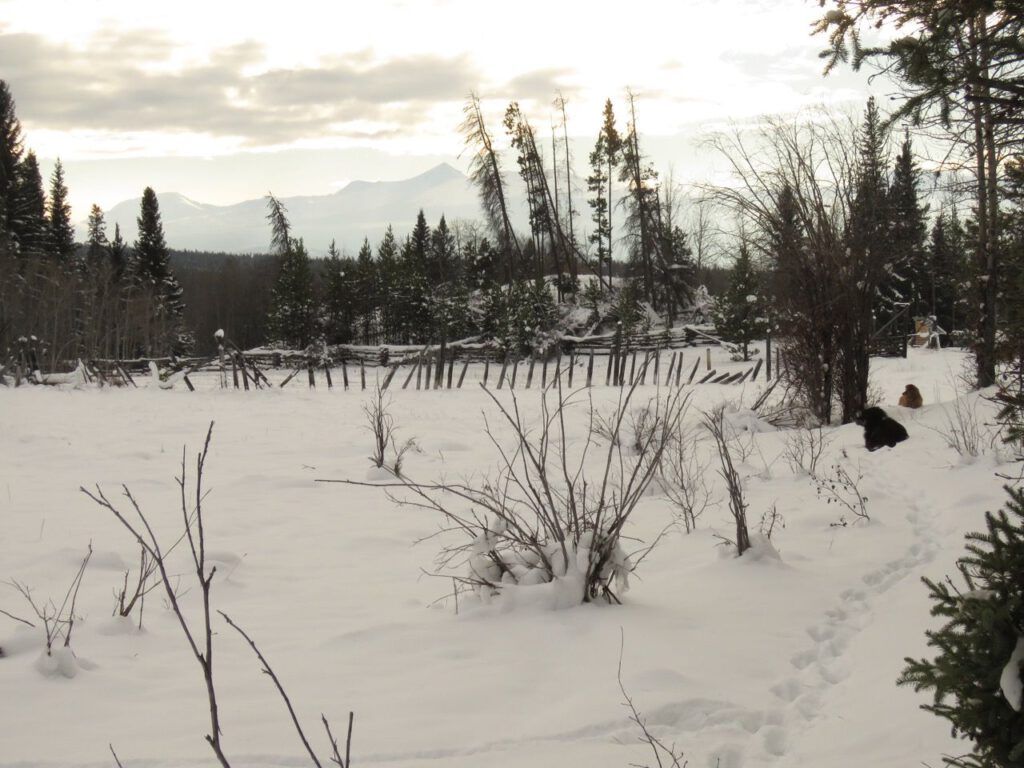 The initial snow and cold had made some pretty skookum icicles on my greenhouse roof.  It took the birds two days to find the feeder. 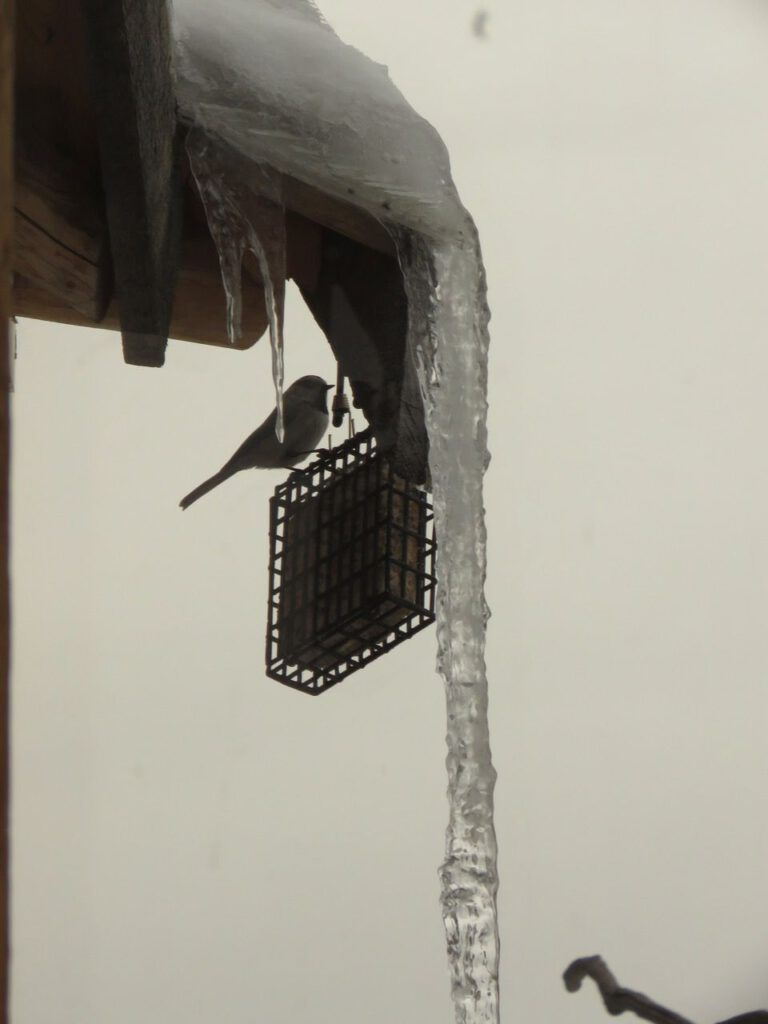 I have the usual two species of chickadee (mountain and black cap), 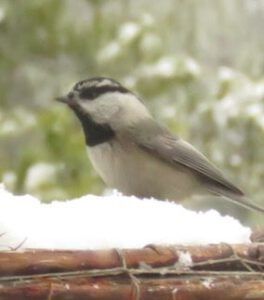 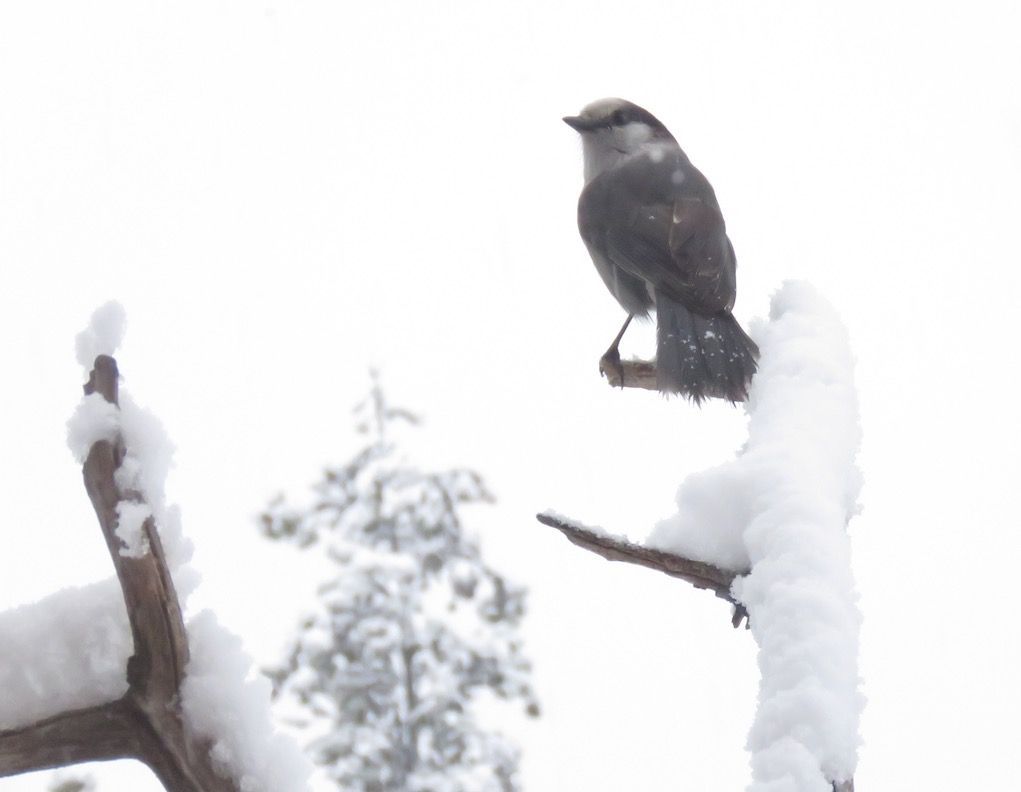 Once the road was ploughed I could go to the Nimpo store for gas.  The bakery says it all.  They go away for most of the year now – which means we have no mechanic or even anyone with a tire machine for a long distance.  We REALLY need a mechanic in this country. 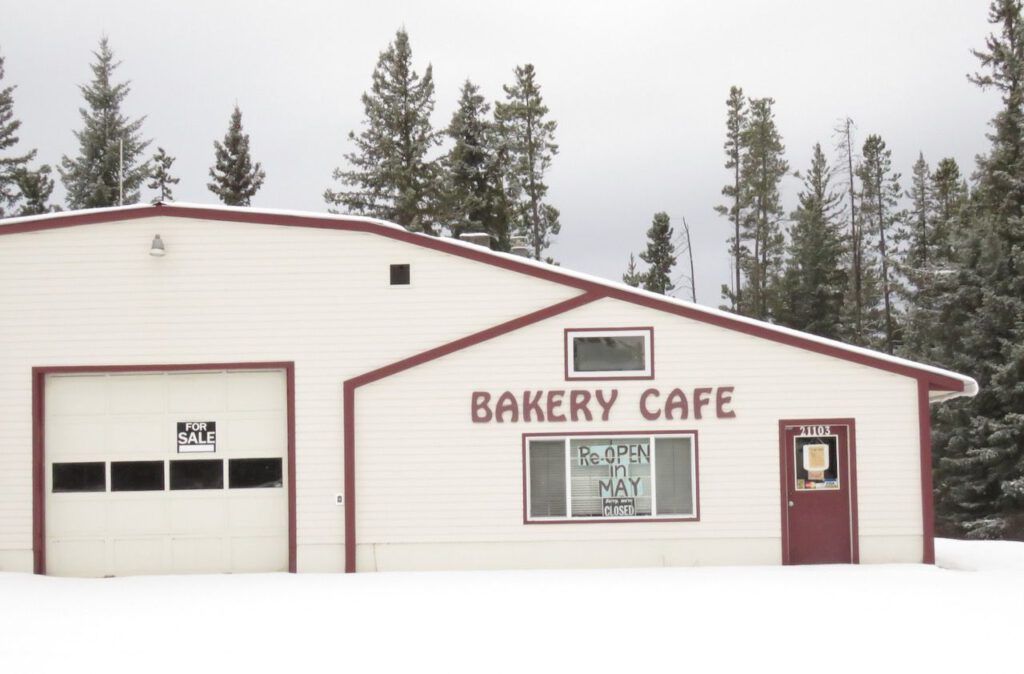 I’ve spent such a lot of time messing about with the plough that I have had little time to go hiking.  The snow is now about a foot deep on the ground and horribly crunchy but not frozen hard enough to bear weight.  Poor old Badger finds it really difficult to flounder in my snowshoe tracks. 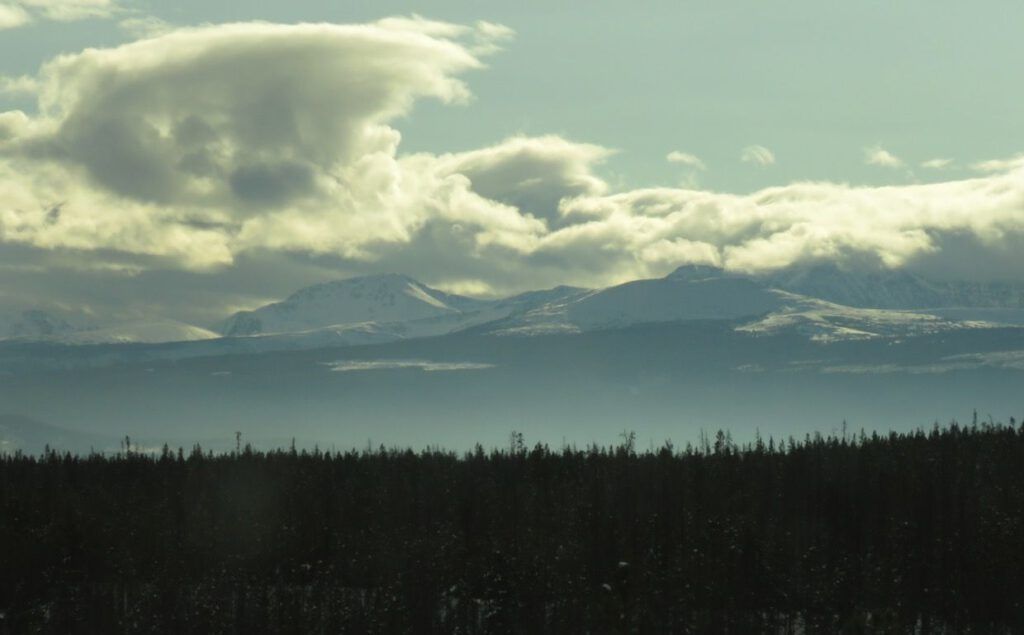 Coming back from Nimpo one could see the smoke hanging in a haze over the fire area.  That evening there was a bit of colour in the sky, and smoke hovered around Finger Peak. 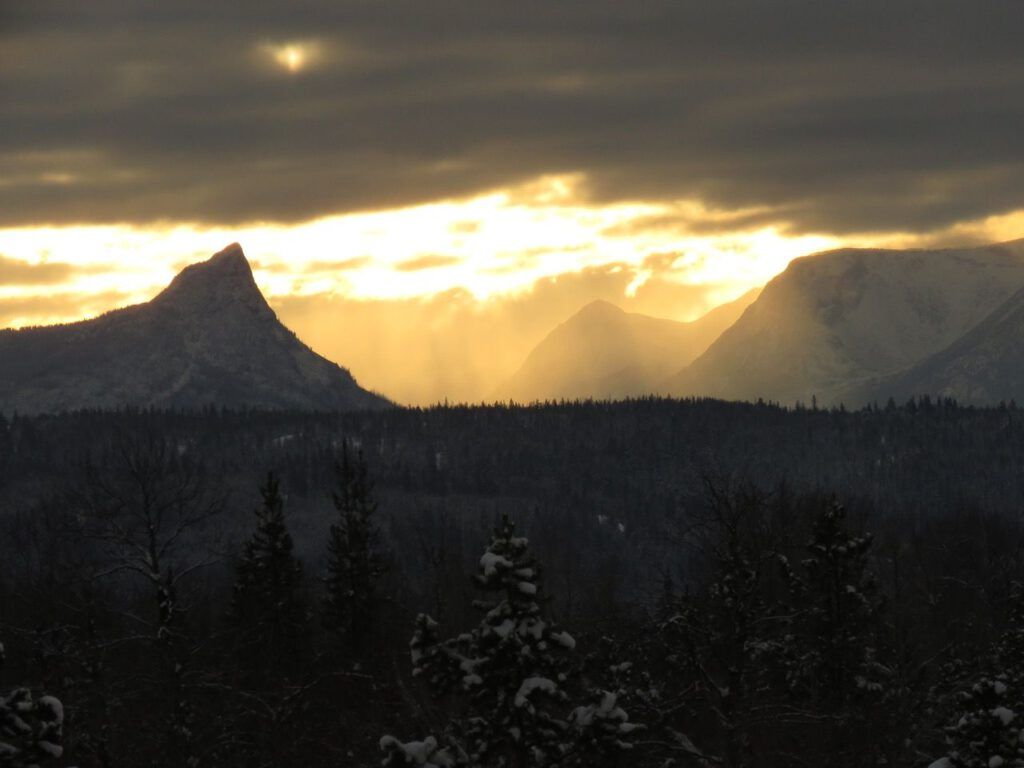 Poor Finger Peak is looking quite bald after its baptism of fire. 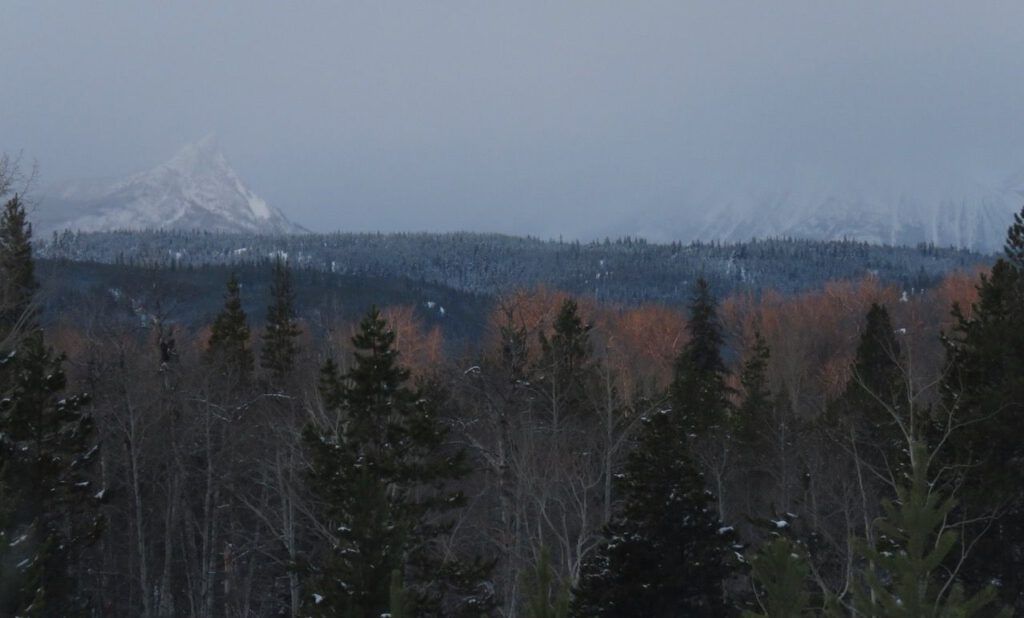 Not all the smoke is from the fire itself, though as the slash is being burned on the fire guards. 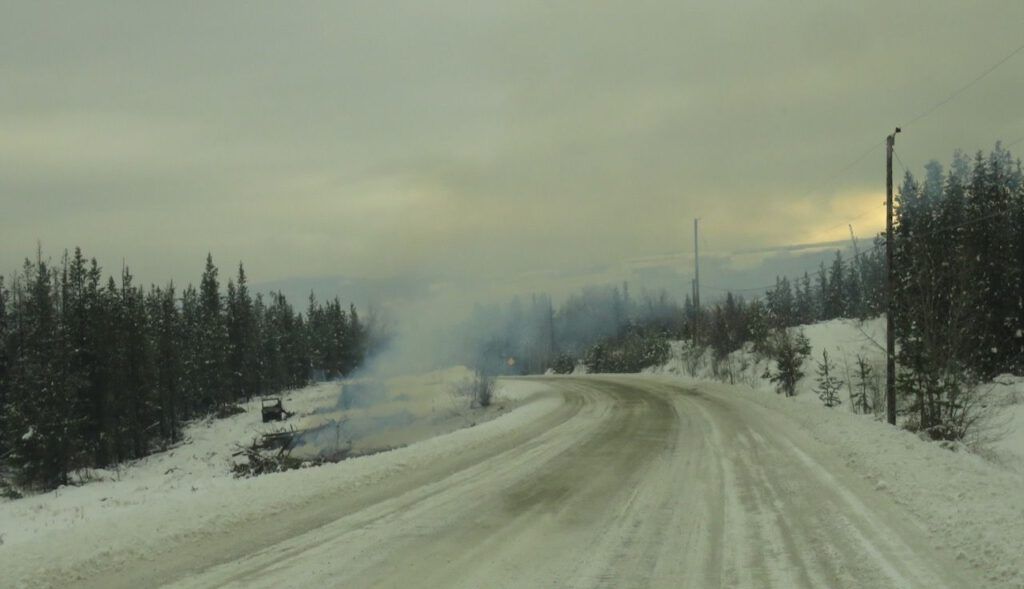 One day, the sun shone. 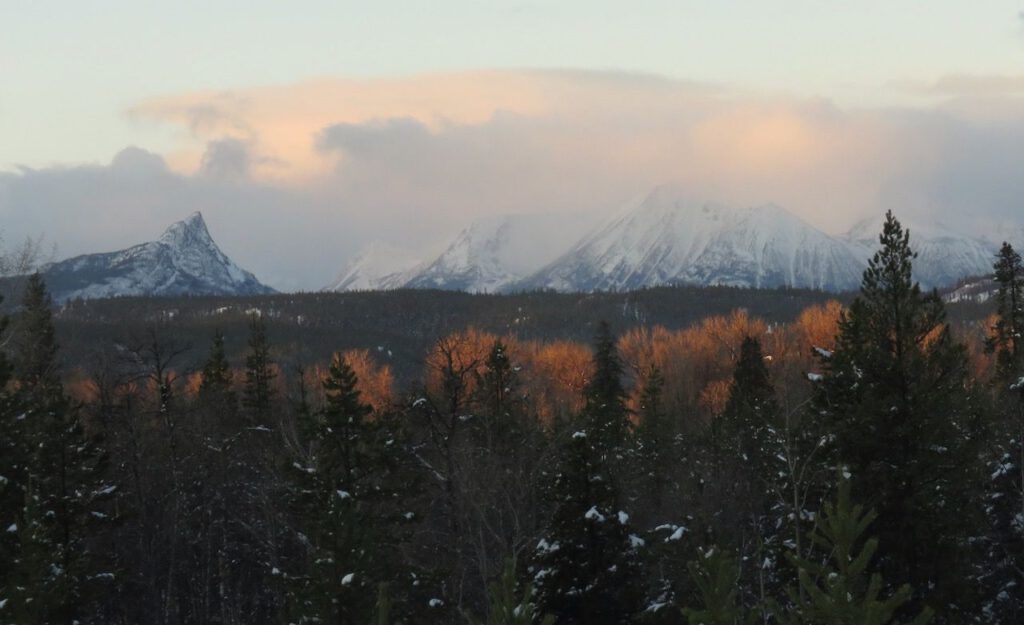 We walked down to the river, which is fuller than usual for this time of year.  Harry enjoyed looking down the bank from his first home with me. 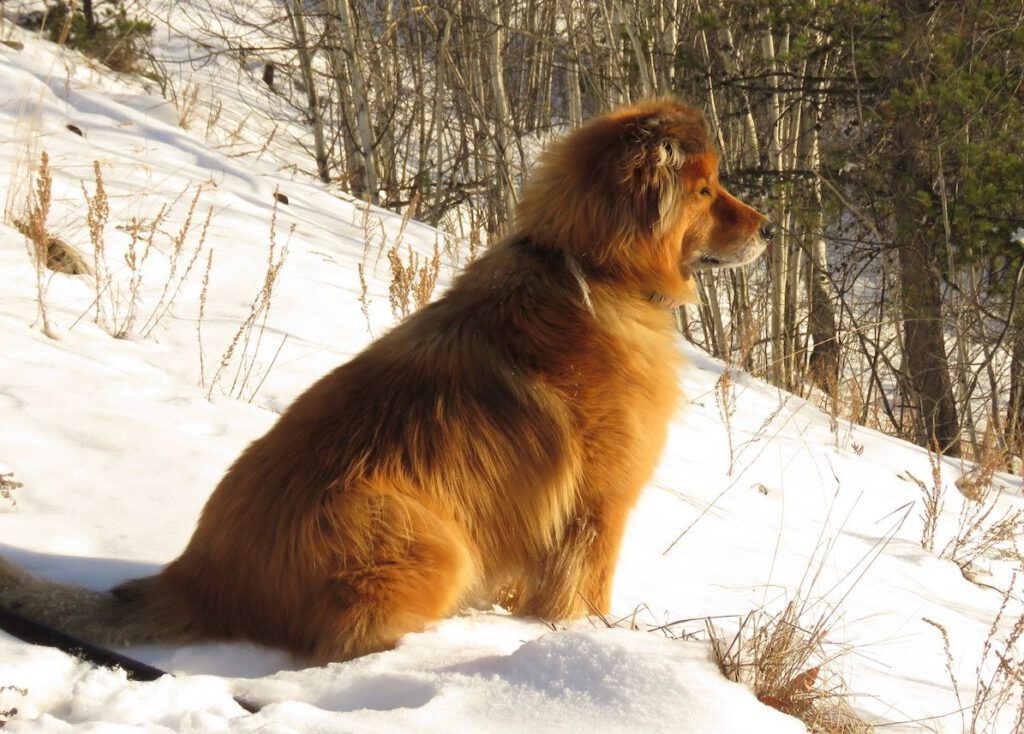 On the far side of the river, there was something odd. 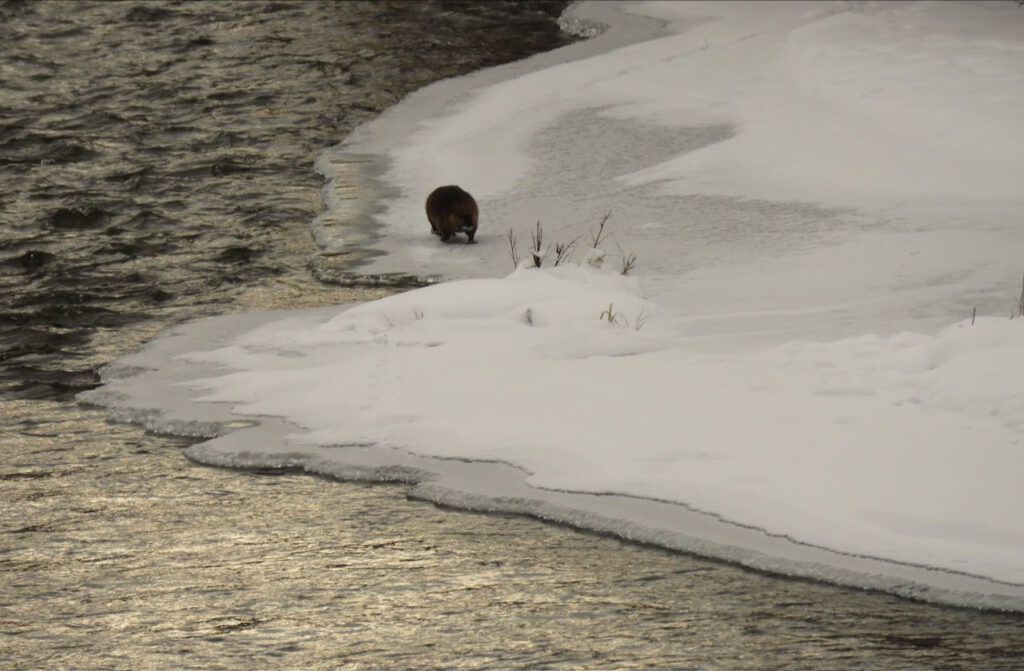 Is it possibly a beaver?  They are common in the country but not often seen at Ginty Creek.  They would not be able to store food for the winter with such a swift current. 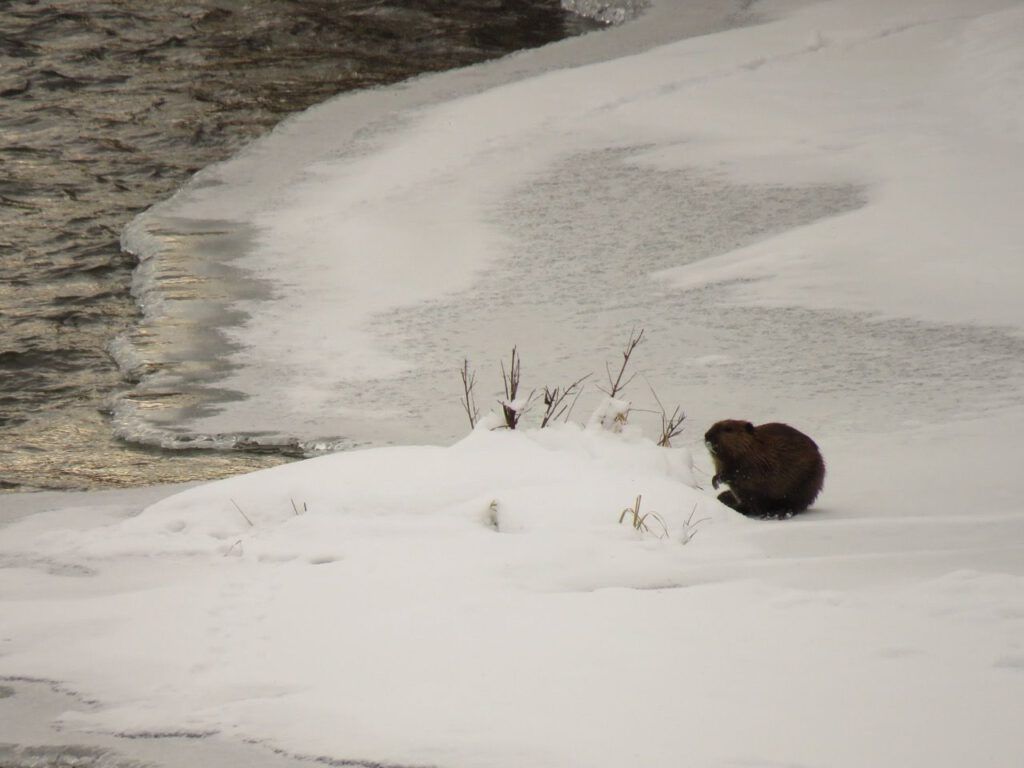 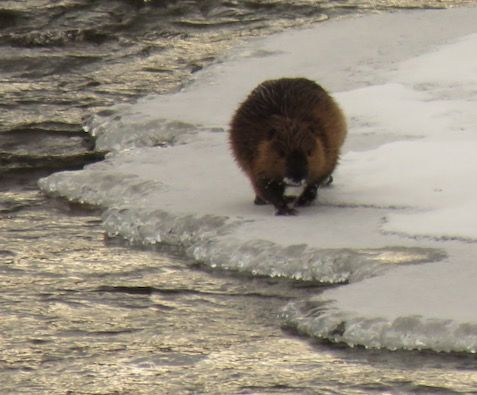 Made me feel chilly just looking at it.

At the end of the month was the Tatla Christmas Craft Fair.  It snowed on the way there. 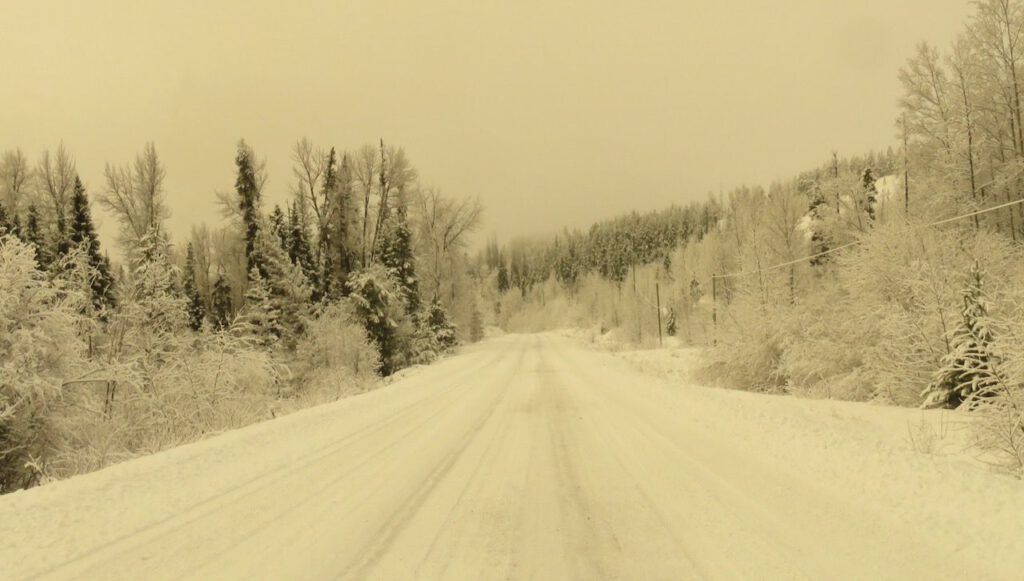 The usual gaggle of booths: 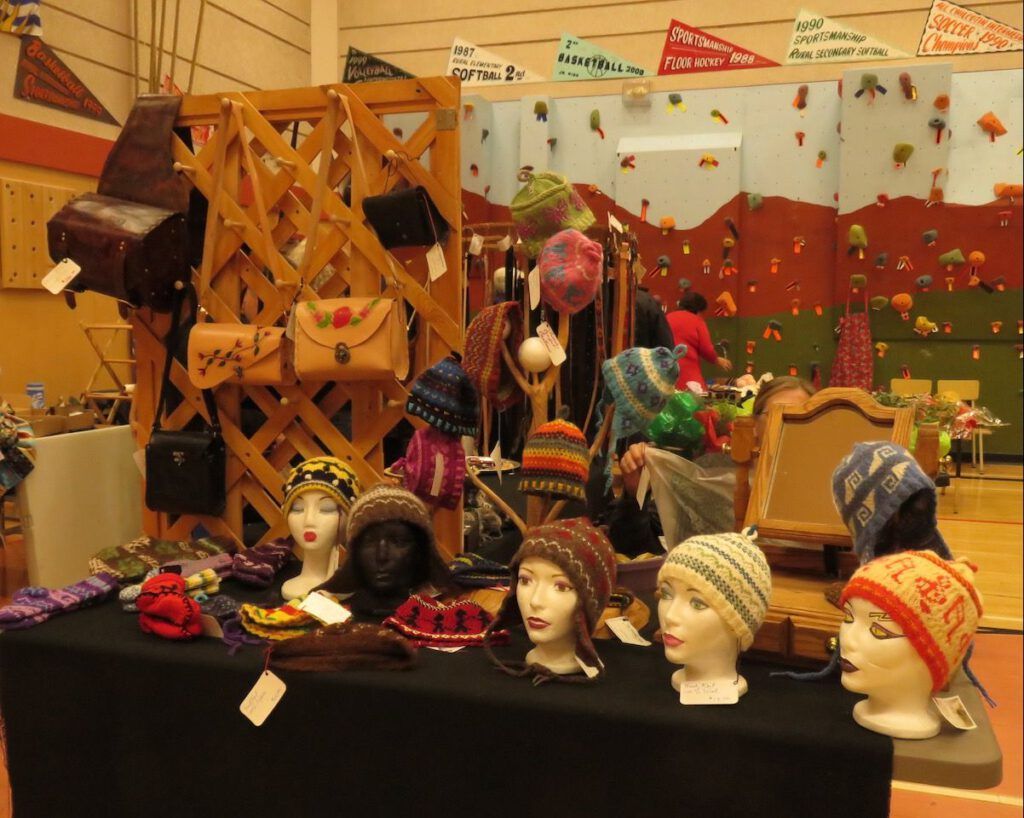 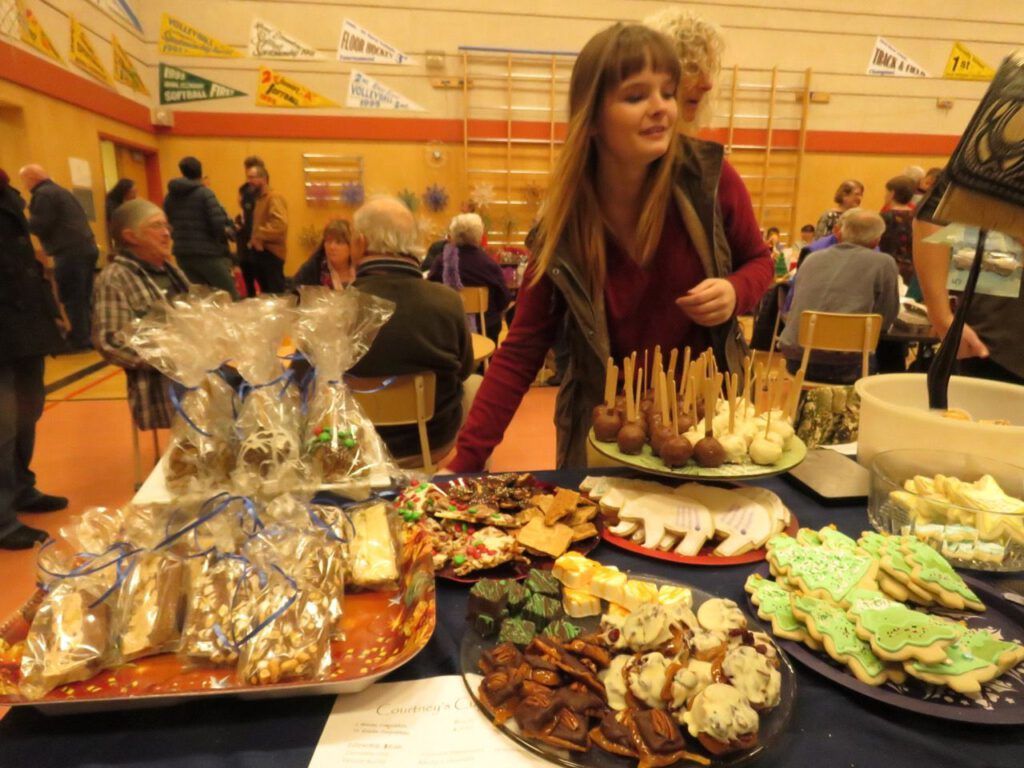 This lady came from the Stone Reserve not far from Lee’s Corner.  Stone was where the first fire started in that area. 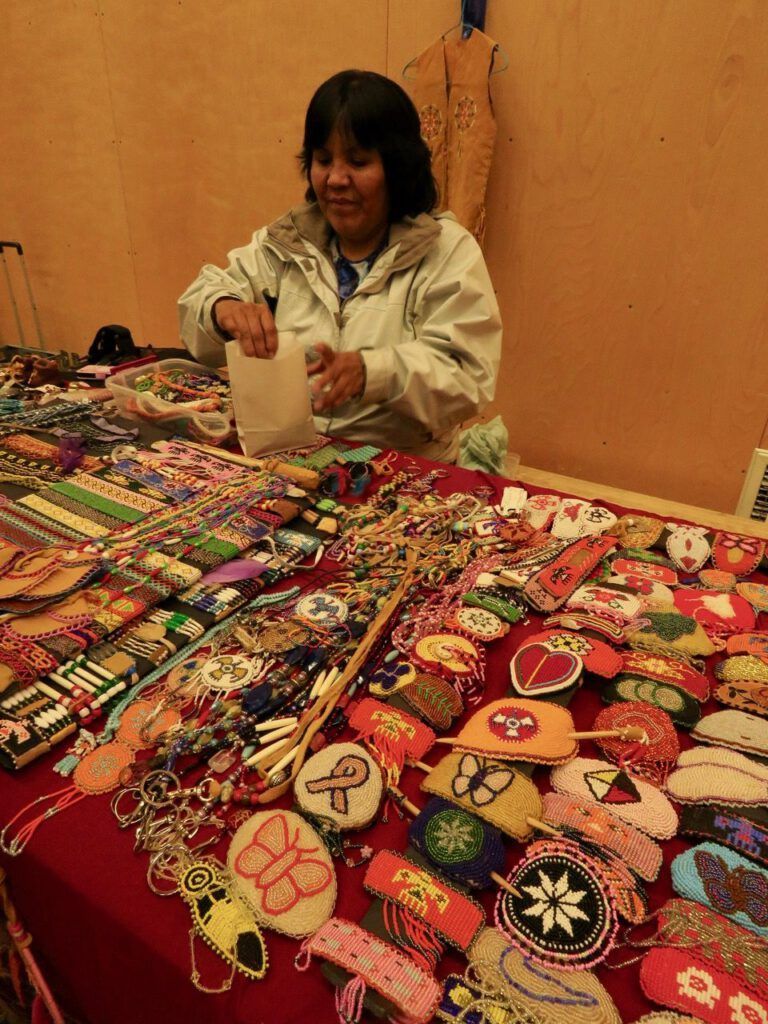 And after that the weather improved a little.  One morning a junco appeared at the feeder – very odd for this time of year but I did have one winter once.  This one did not appear the next day.  Must have been a one-night stand. 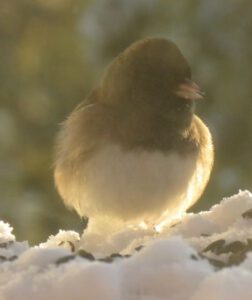 The sun is patchy, though and it thaws in the afternoon while storms rage over the mountains.