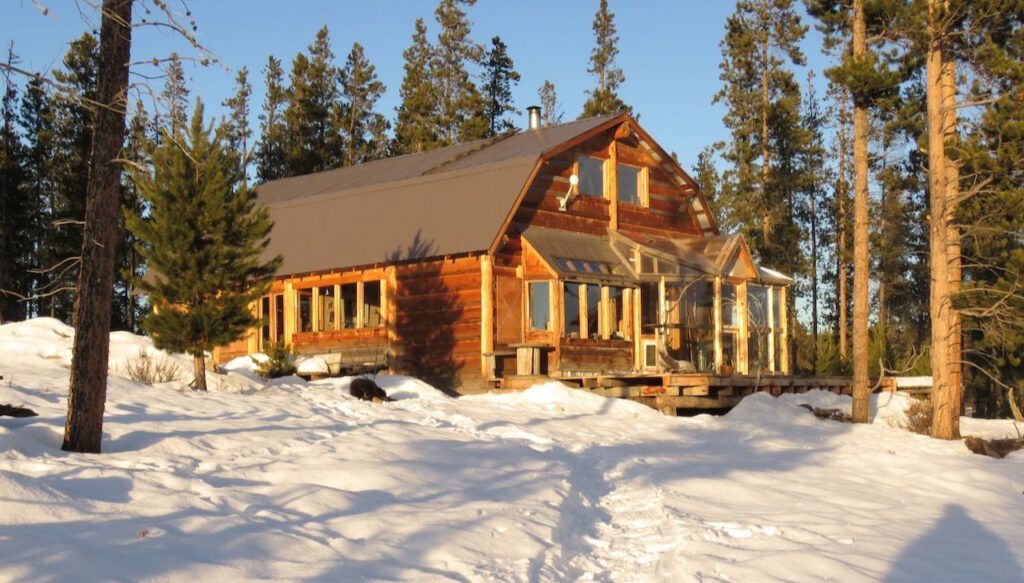 Well I certainly can’t complain about the weather too much so far this December.  We’ve had a lot of sun – very few days without at least some.  There has been no precipitation at all for a couple of weeks.  It has not been cold – down to about -15C at night and -4C during the afternoon, and when the sun shines it is balmy.

We have also, though, had a lot of fog. 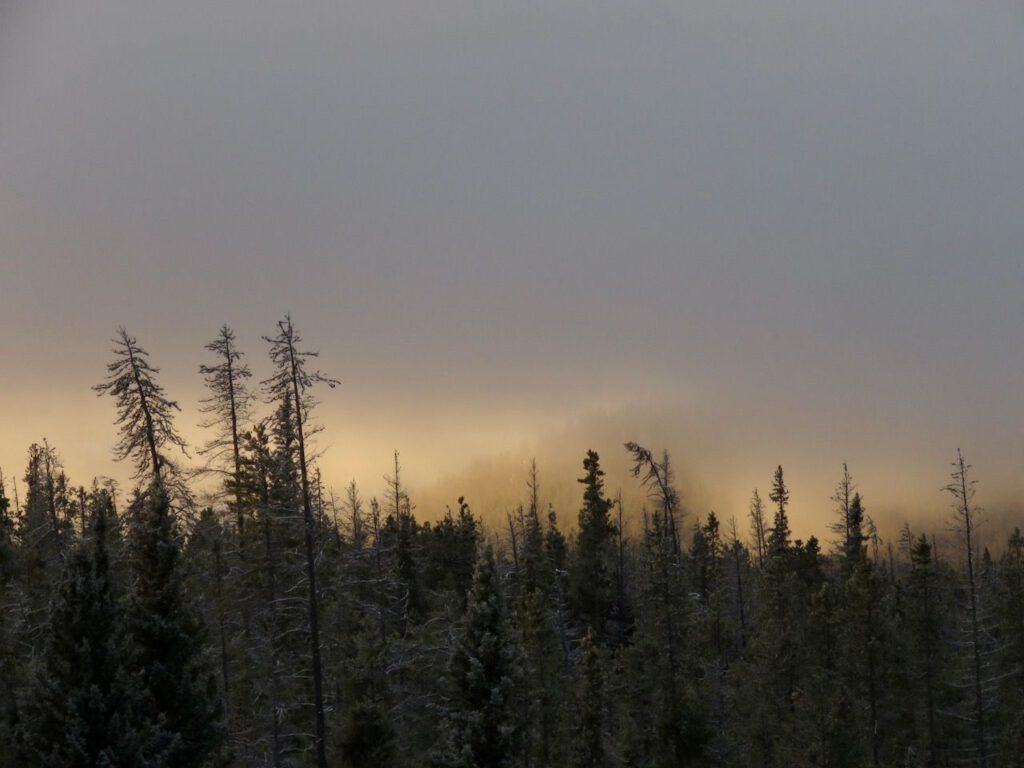 This has translated into hoar frost on the trees.  When the sun hits it, little showers of frost crystals rain down. 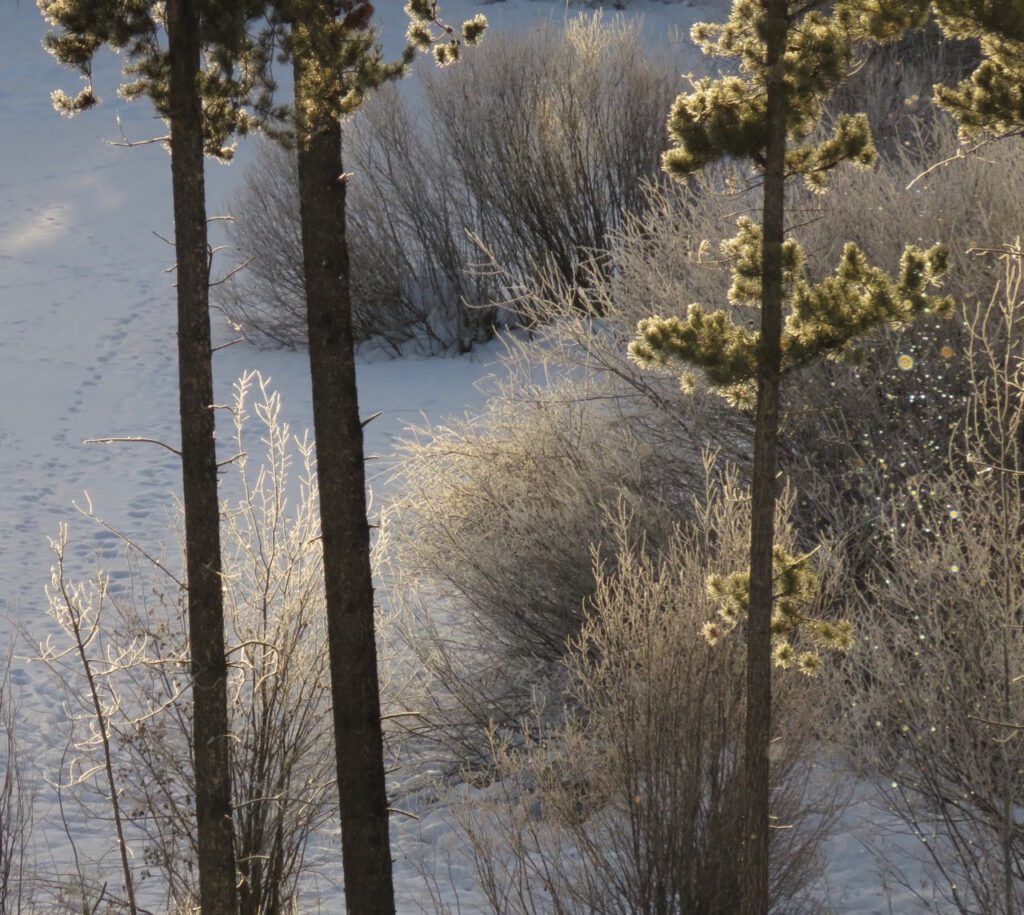 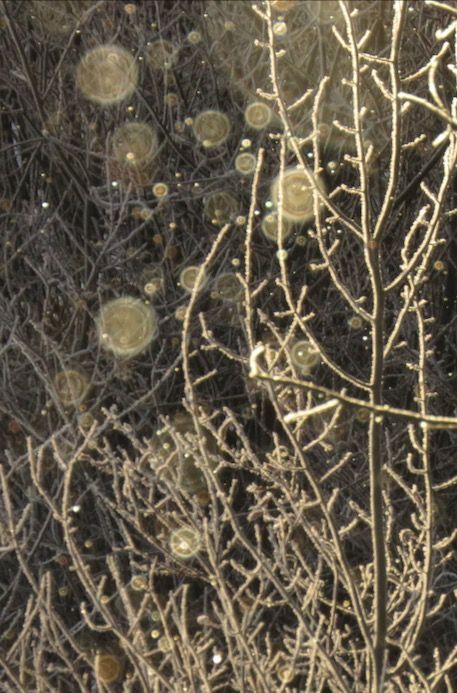 It picks out the details of the vegetation is a completely different way. 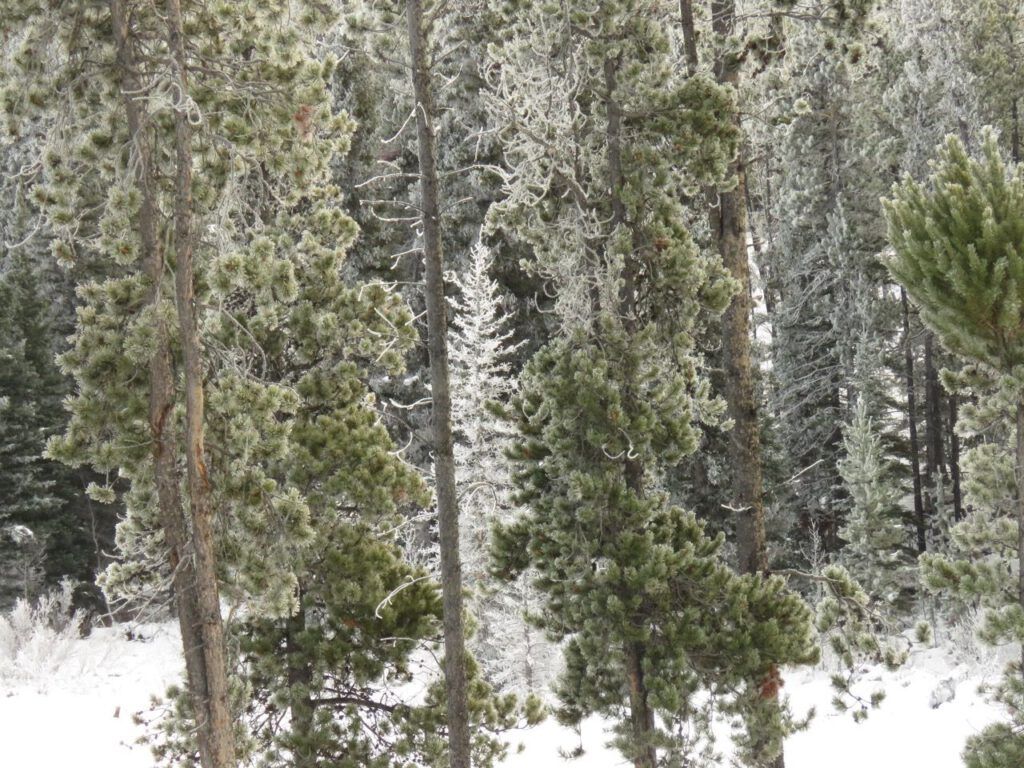 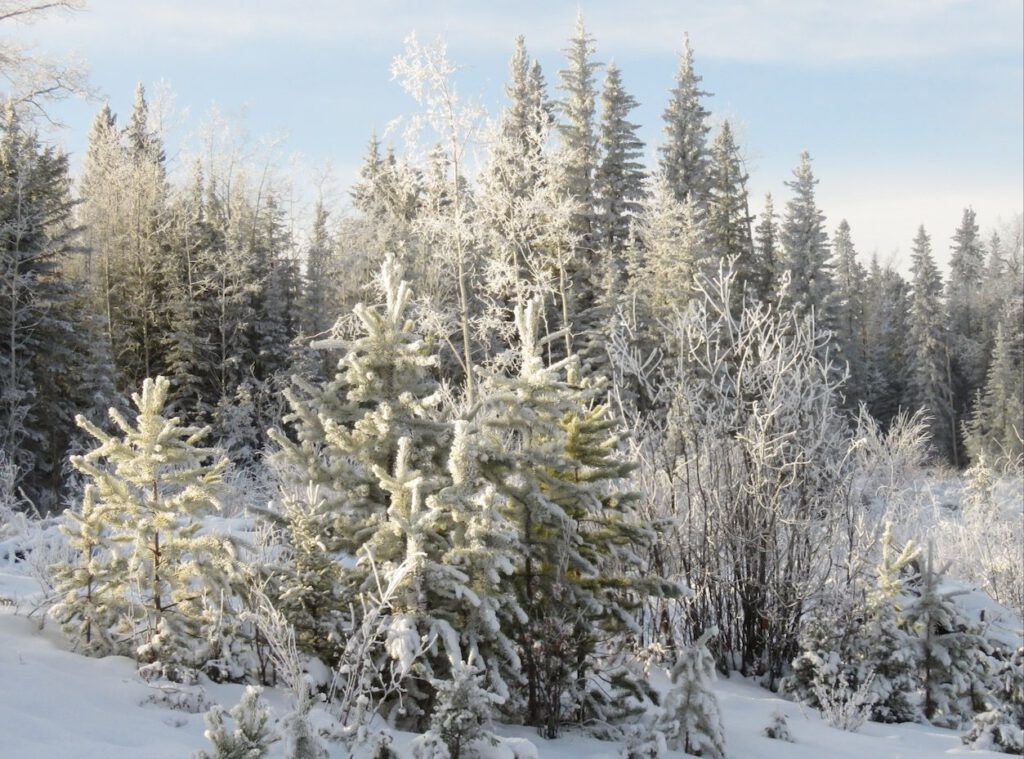 But even when the sun breaks through, the fog hangs around in the south/west quarter. 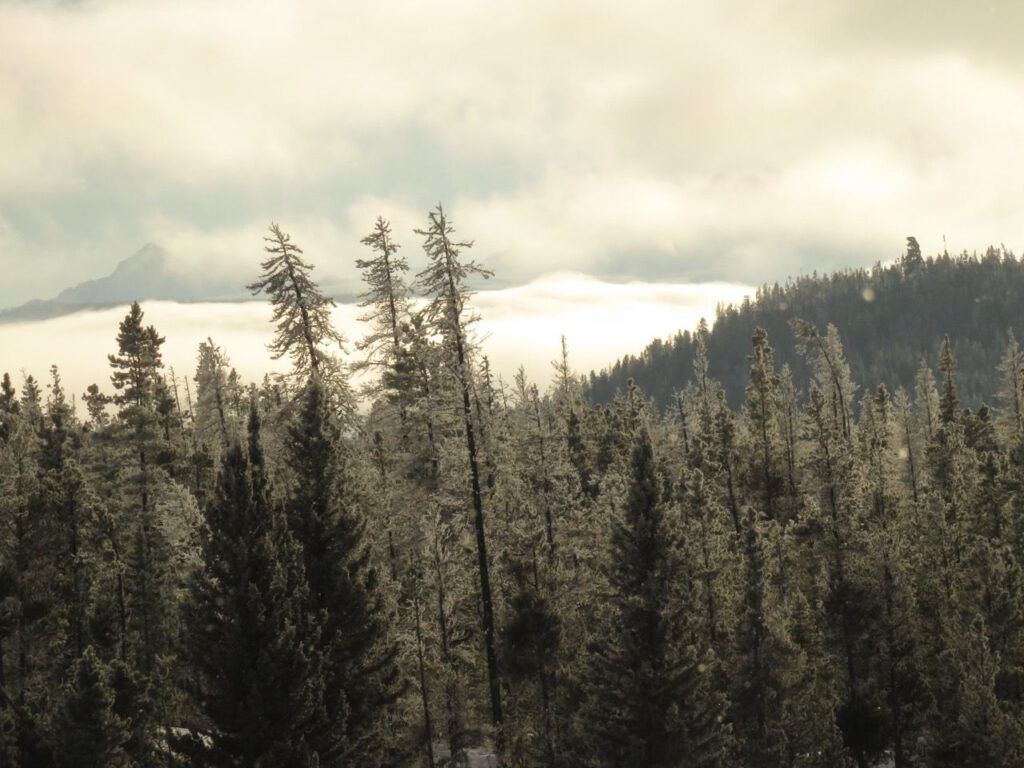 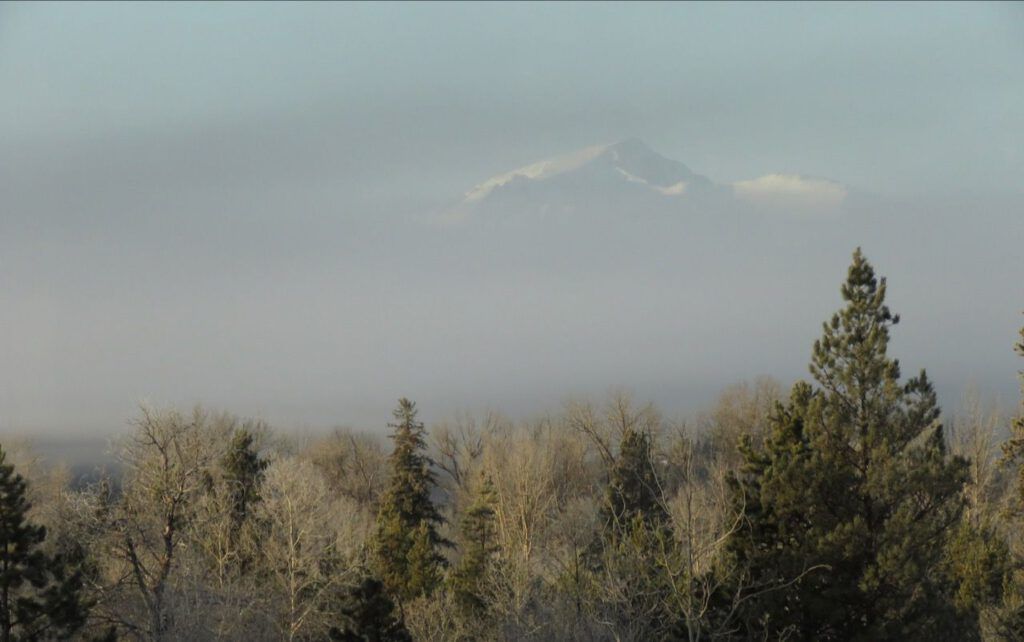 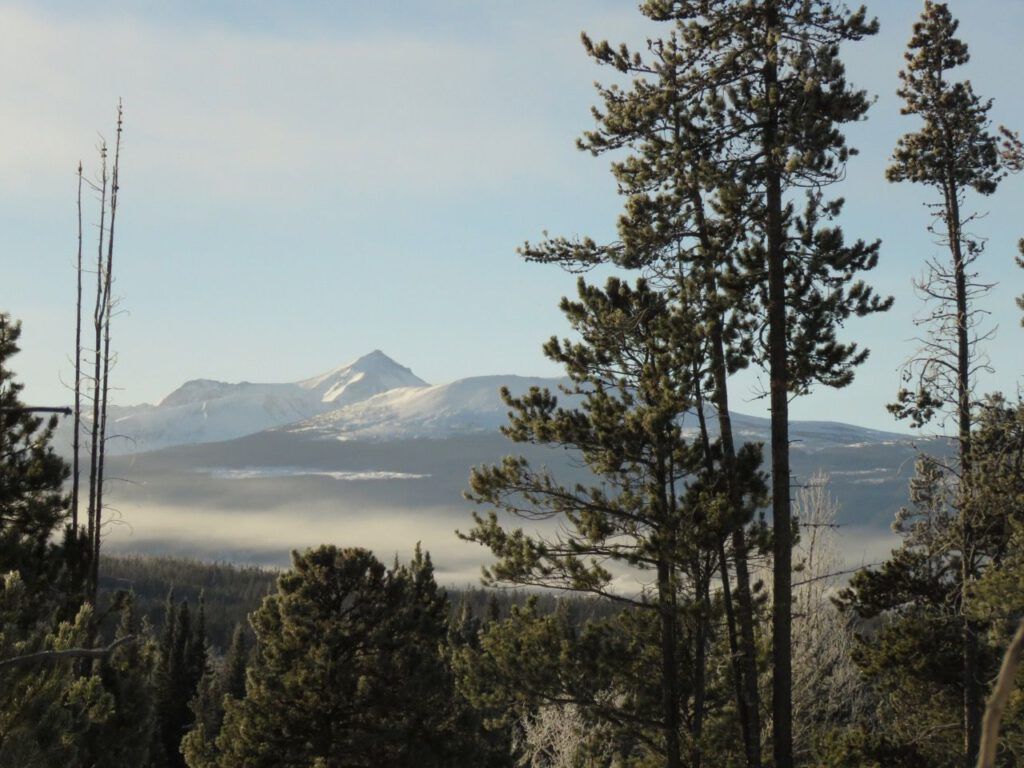 These are all areas where the fire was – and probably still is – burning: I guess the heat reacts with the cold and creates the vapour.  Even from a bit further north, looking south, the same thing happens.

I went to the library at Tatla Lake the other day and drove through downtown Kleena Kleene just as the fog cleared.  Because of the open Klinaklini River, the frost is always more dramatic there. 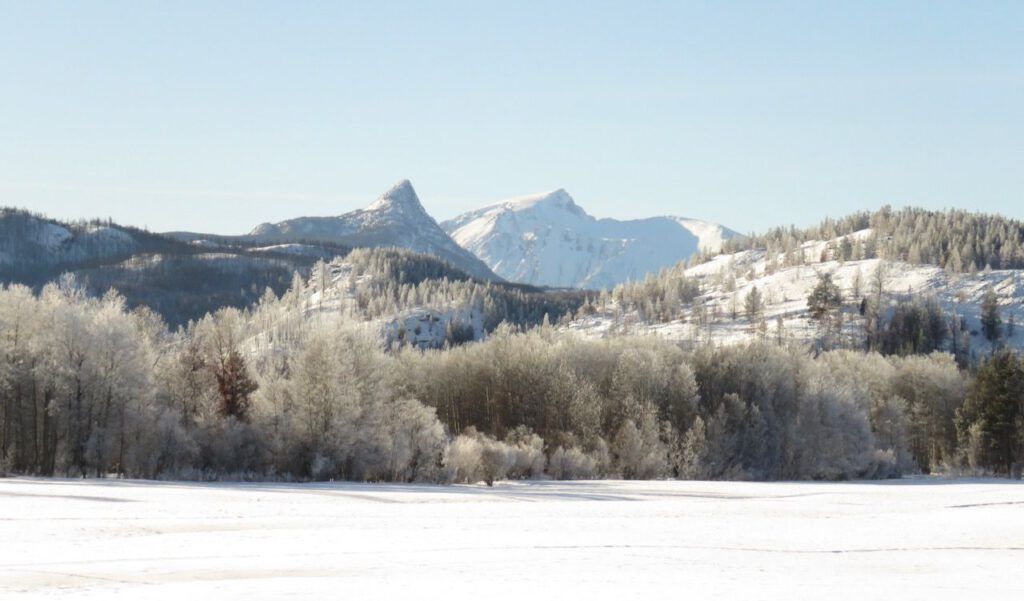 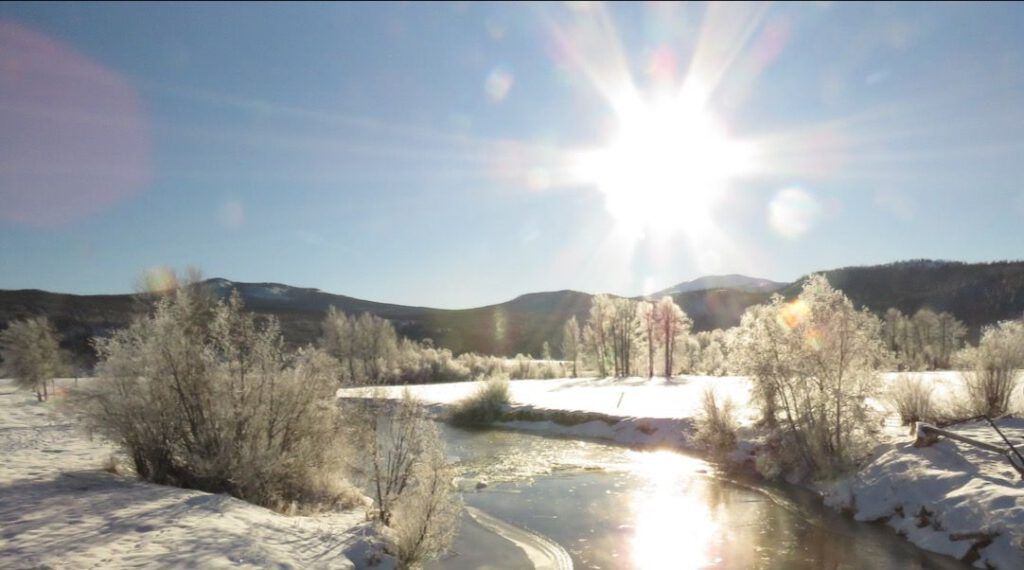 The line of murk on the next picture, however, is smoke.  Not sure if it is still the fire or a pile of burning slash. 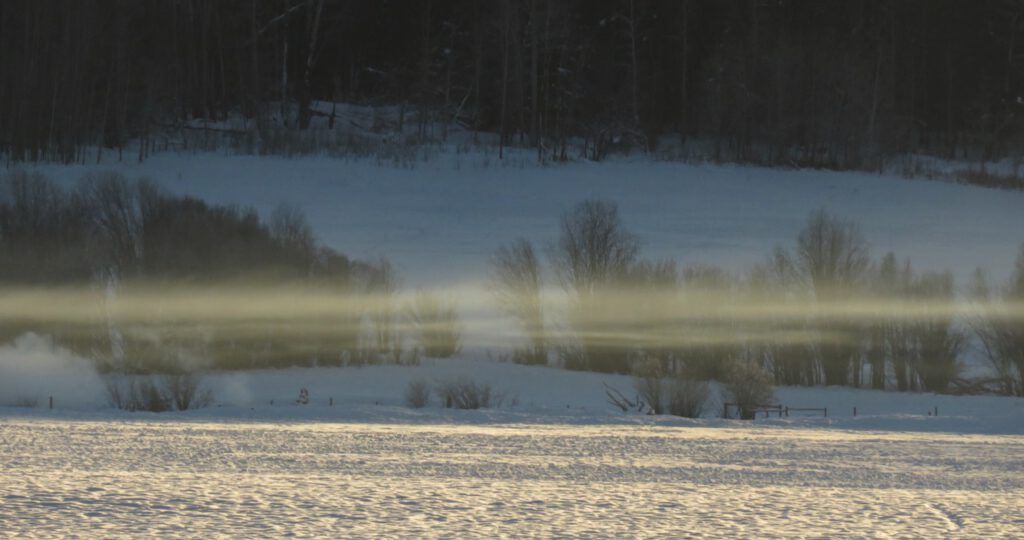 Here, however, the upper layer is fog and the lower haze is definitely smoke.  Perkins Peak behind. 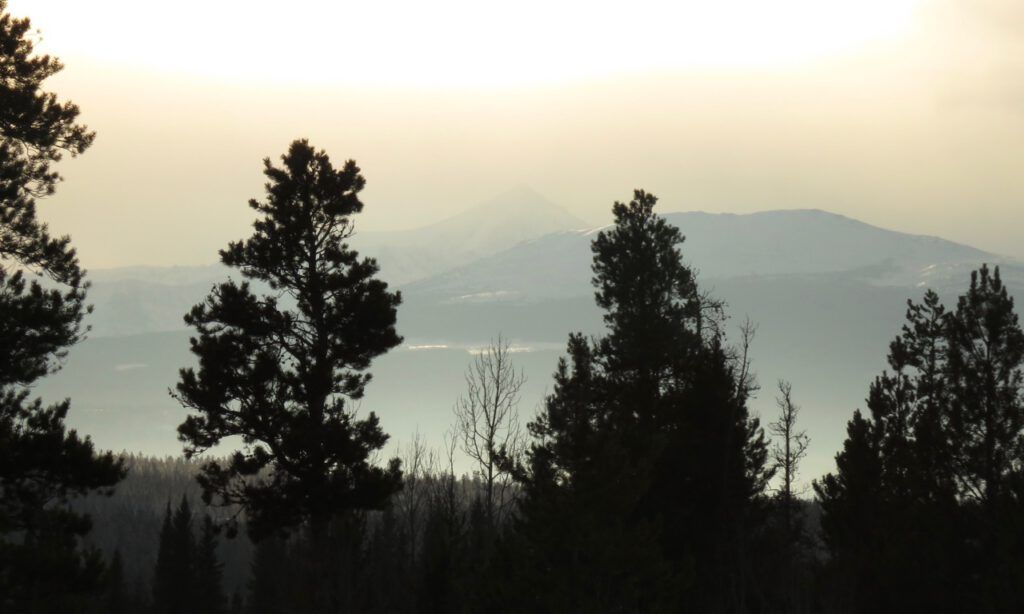 The clearer afternoons have meant that it is possible to see the sun meet the horizon.  It is almost at it’s southernmost destination. 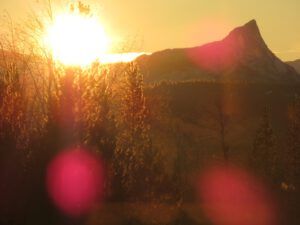 The low light creates some interesting abstract effects on the snow. 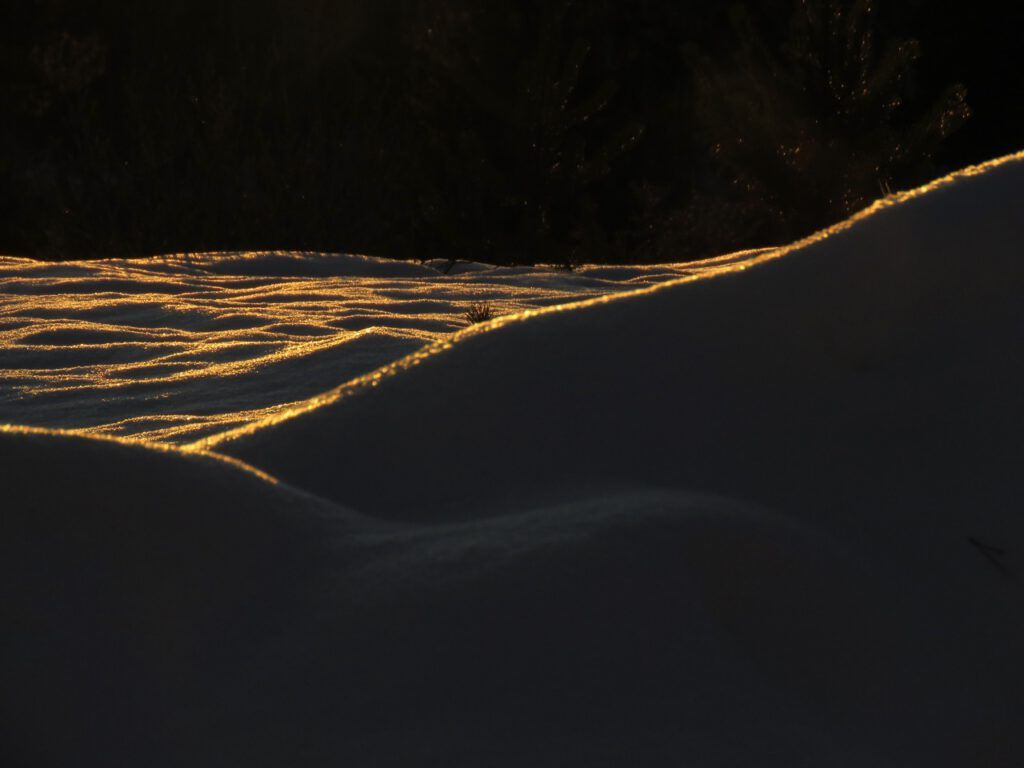 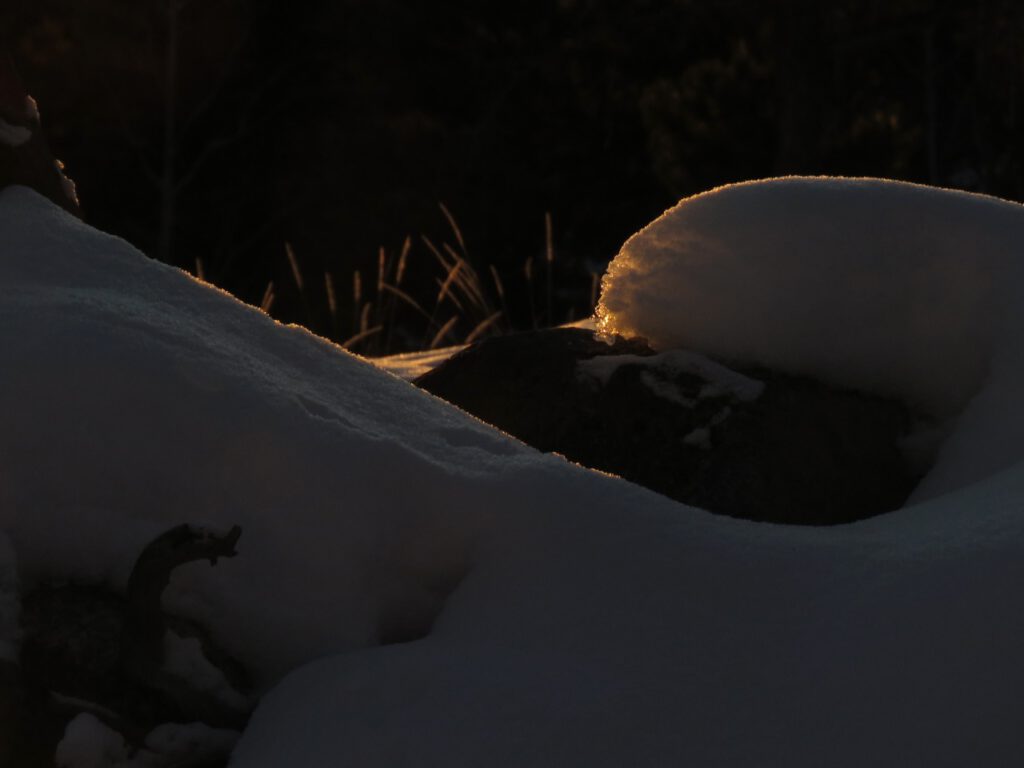 A month after I arrived home from Harry’s book tour, I took my final trip of the year to town.  I chose December 5th, 2 days after the full moon, as I knew I would have moonlight in the morning.  It is always more pleasant to be aware of the surrounding landscape.  I was expecting bad roads so I left home at 3.30:AM (to make sure I got there for 8), and did not arrive back until 6.00:PM so most of the journey was in the dark and I took very few pictures.  The road, however, was icy only in the western end and a bit slick close to town where fresh snow was falling, but the rest of the route was bare and in fact there was no snow at all there.  The sun was low for the first part of my journey home. 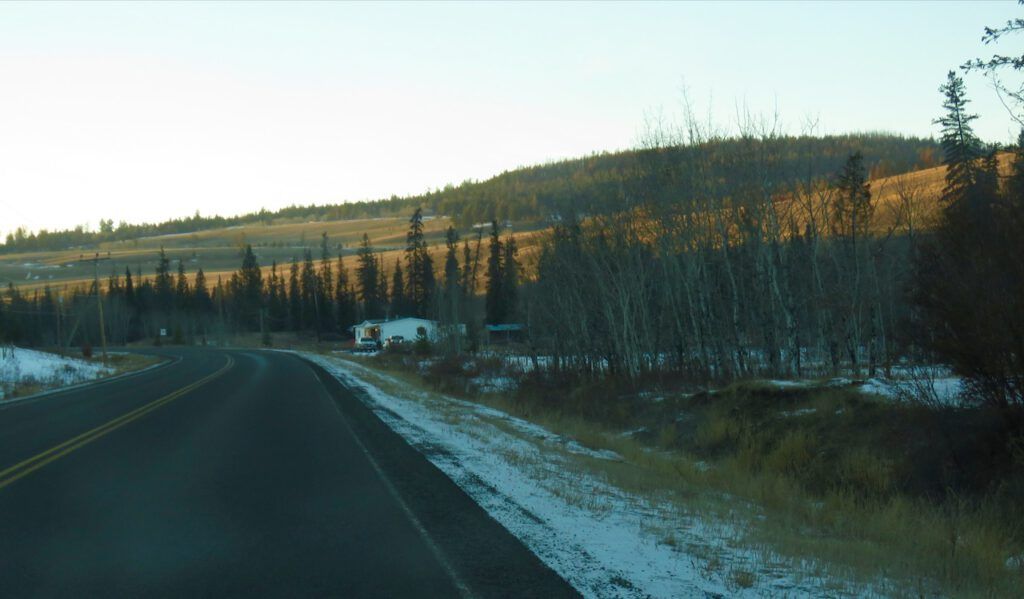 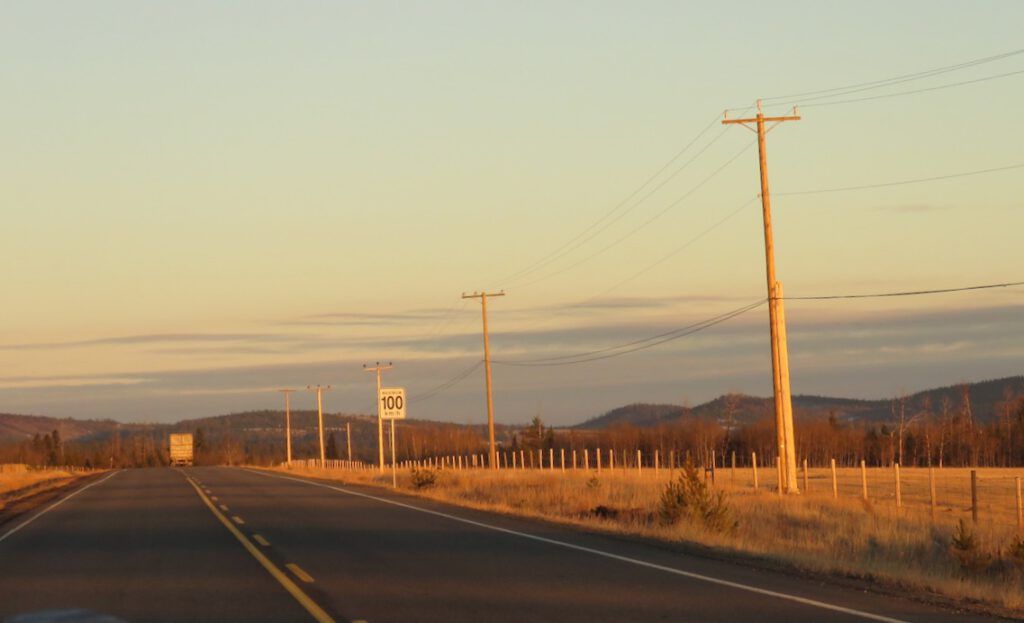 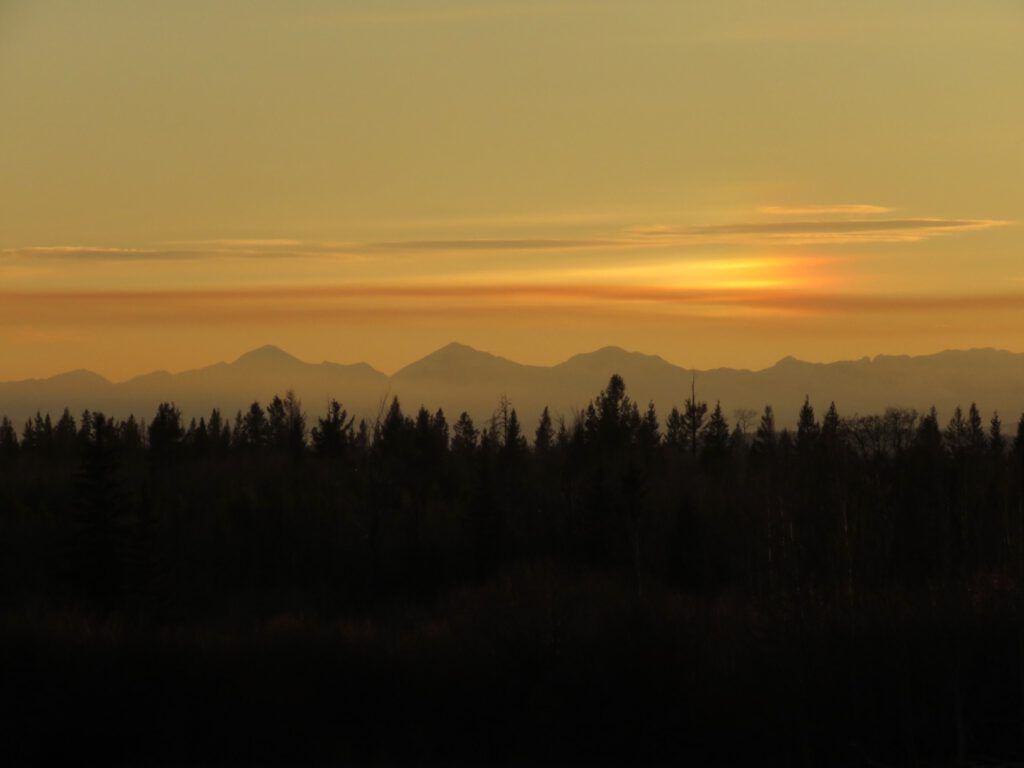 At home I’ve been puttering about with chores.  I still have not broken all my snowshoe trails: not only is the snow quite difficult to crunch down, the trails are also littered with an amazing number of fallen trees.  Many are too difficult to get around and I have had to drag a chain saw on a toboggan to deal with them.  The snow, of course, makes the work take twice as long. 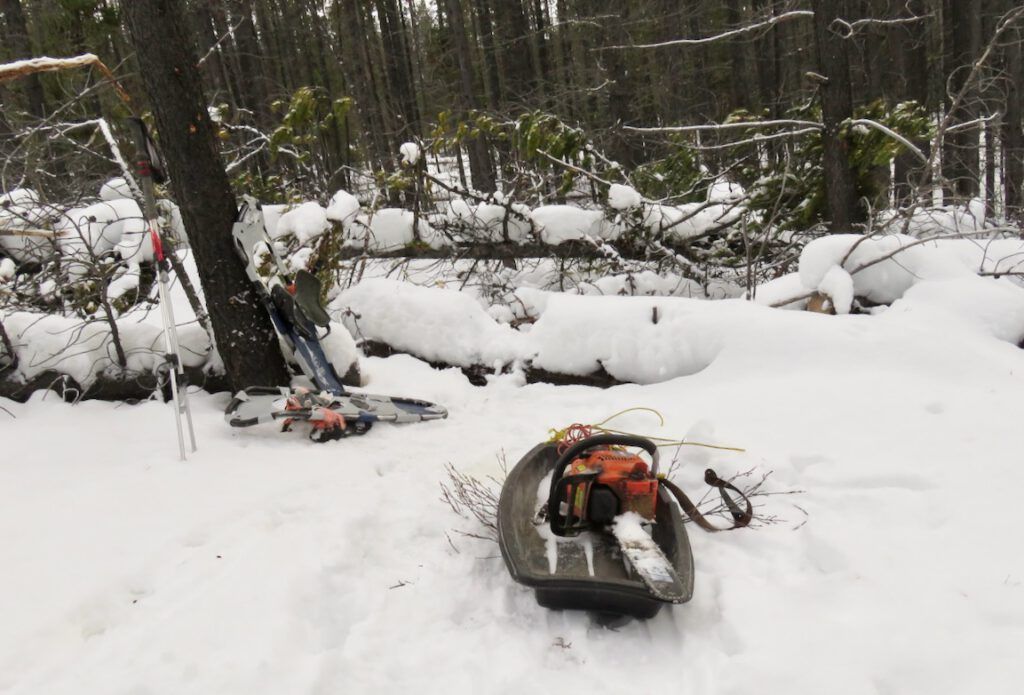 I was thrilled one day to see a few redpolls at the feeder.  They add a bit of colour to the bird life.

It is interesting to see the way the birds behave with each other.  Chickadees give each other space.  Rarely are there two on the feeder tray.  They sit on nearby branches and wait their turn to dive in and get a seed.  The redpolls, however, buddy up like chickens.  They are a little smaller than the chickadees but both birds act as if the other is not around.

In the upper picture you will notice a pine cone on the feeder tray.  One is put there occasionally by the squirrel. 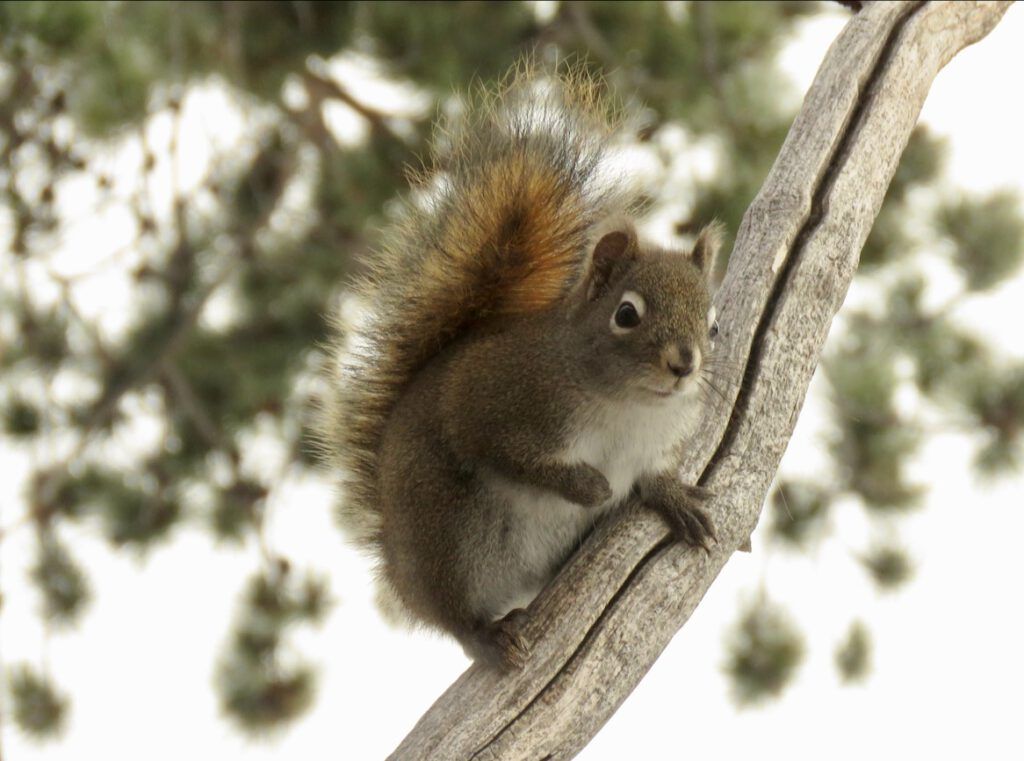 The other day I received a seed catalogue and I checked through ancient seeds I already had to see which were still viable.  I tossed out a lot of peas and beans.  I thought the squirrel might enjoy them so I threw them on the deck hoping that would keep the squirrel off the feeder tray for a while.  The squirrel loved them – but not in the way I expected.  He/she spent a couple of hours gathering up all the large seeds off the deck, one by one, and putting them onto the feeder tray. 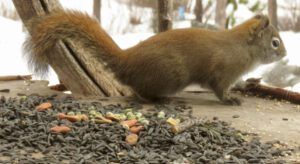 By the end of the day he/she had also added several more cones and a couple of dried mushrooms. 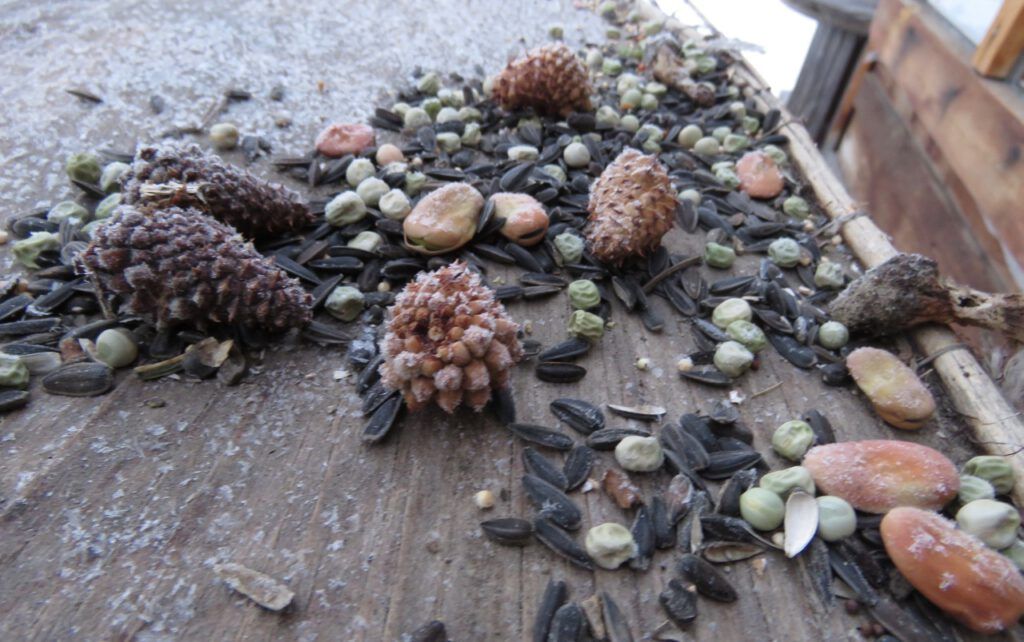 I tossed them further away and now only a few make it back each day.

Last Saturday was the Tatla Lake School’s Santa breakfast.  It is always a lot of fun.  First there is a big meal. 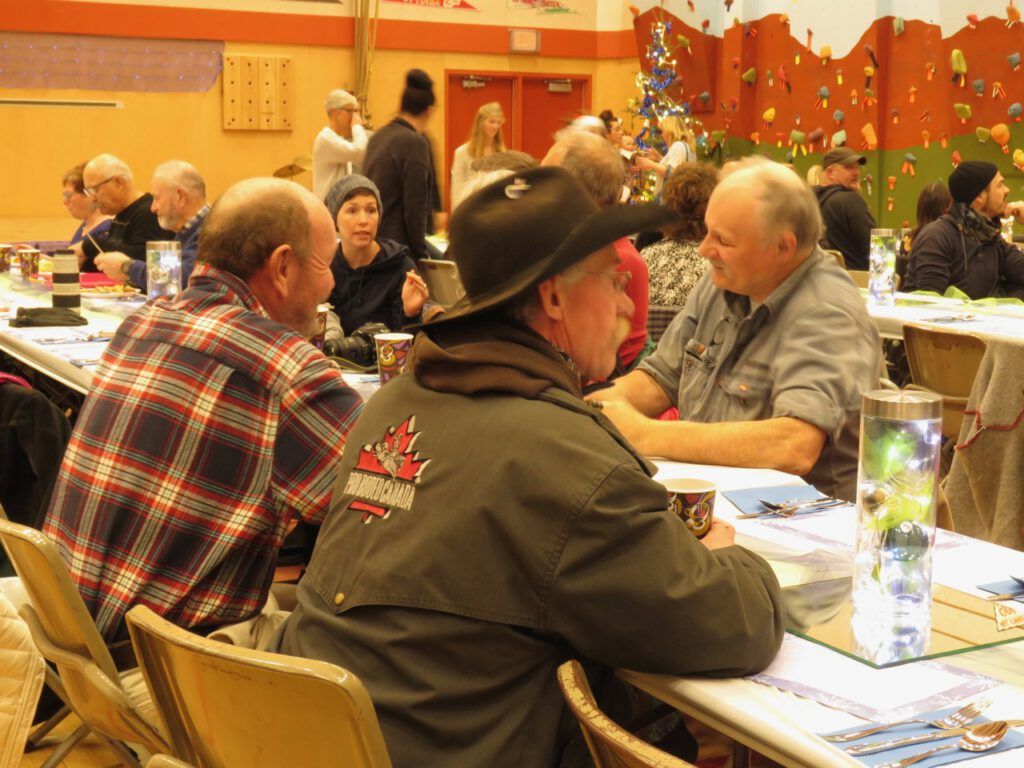 Then the kids put on a concert. 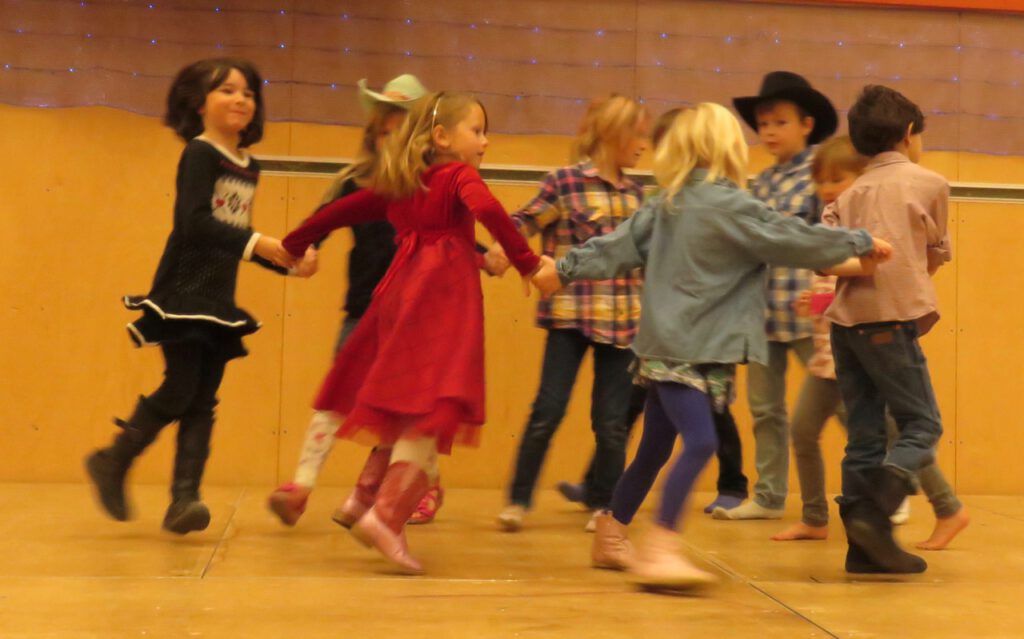 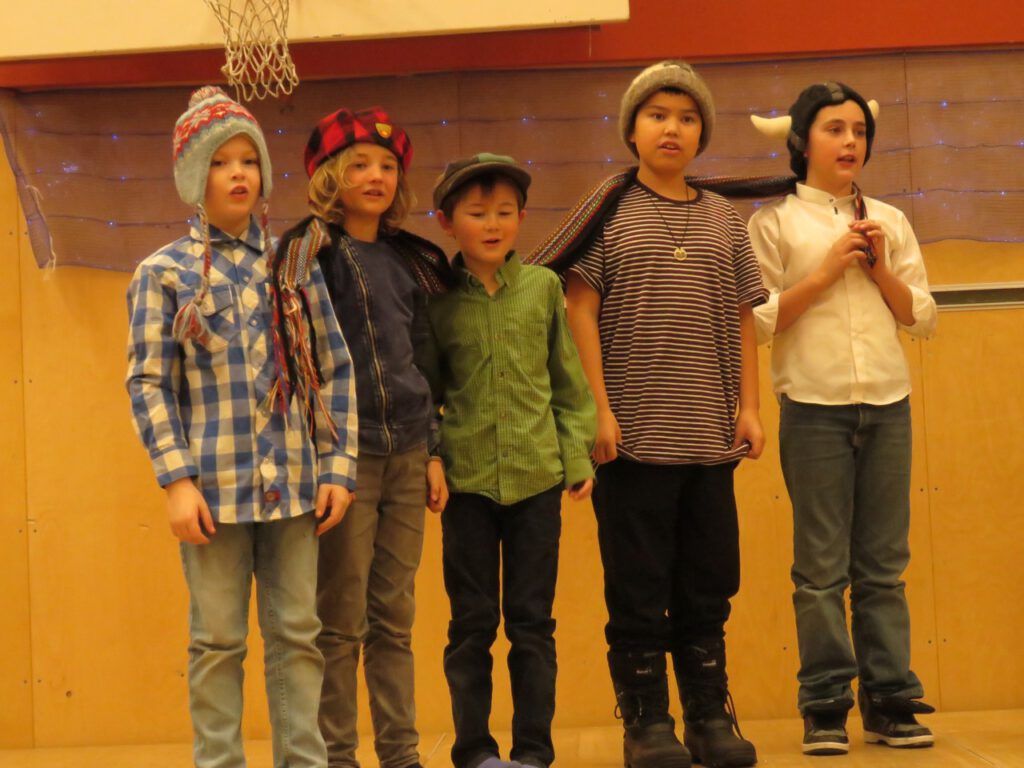 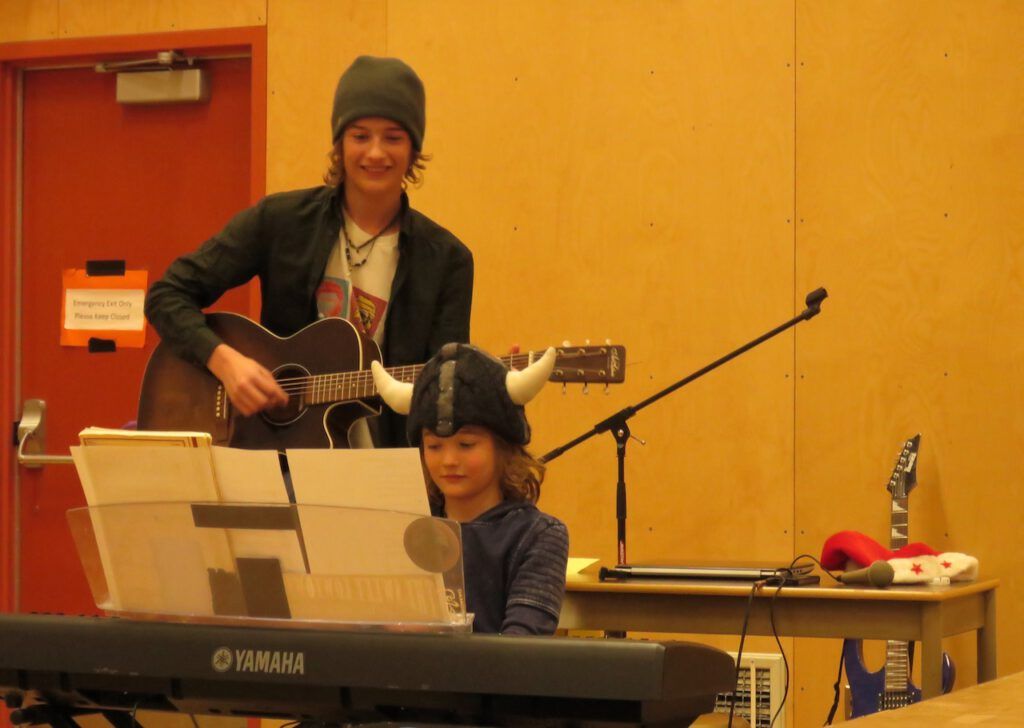 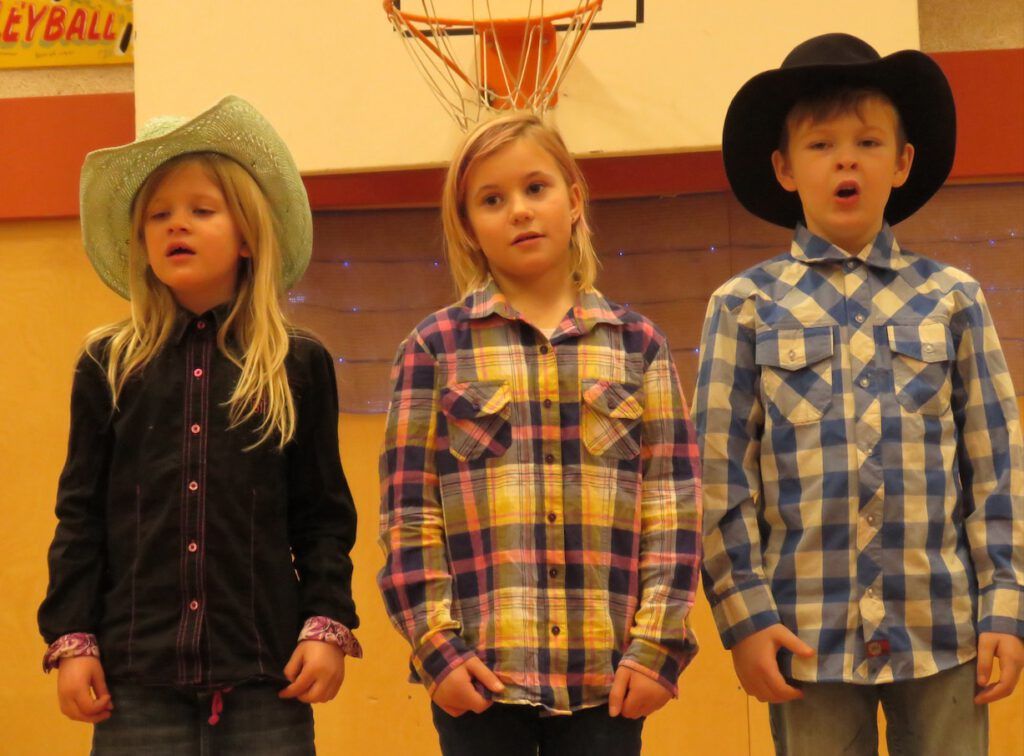 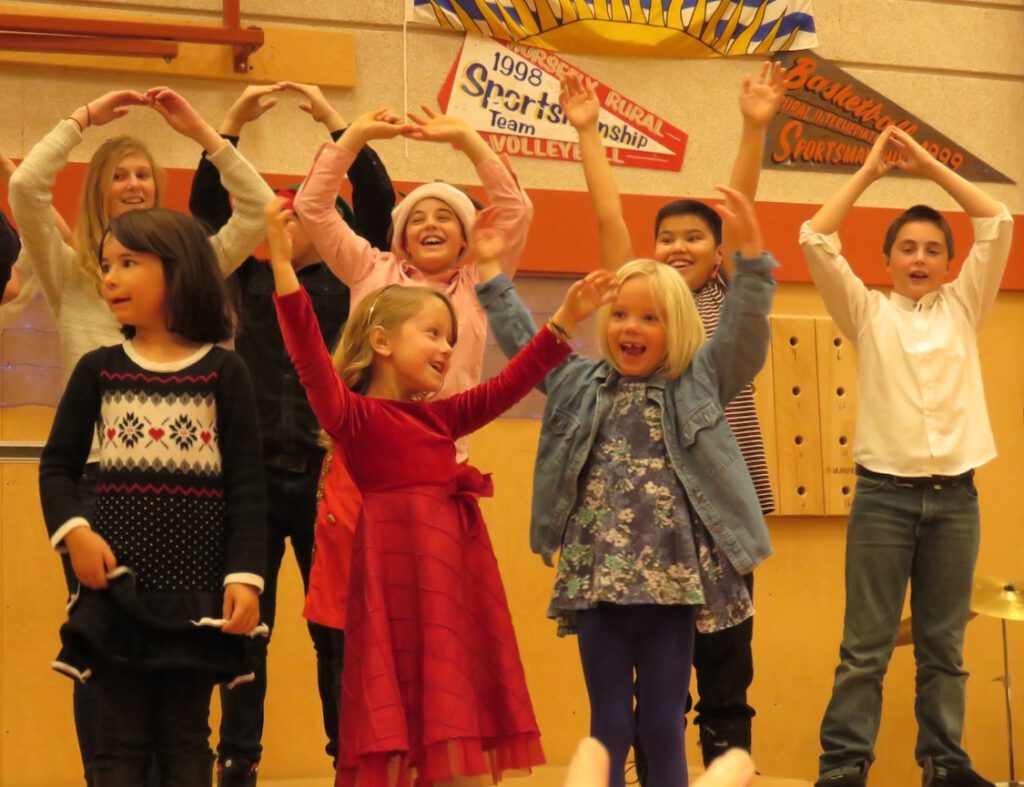 Yesterday was the first time since I’ve been home that the sky was clear enough in the morning to see the sunrise point.  It will rise just to the right of that tree on the shortest day. 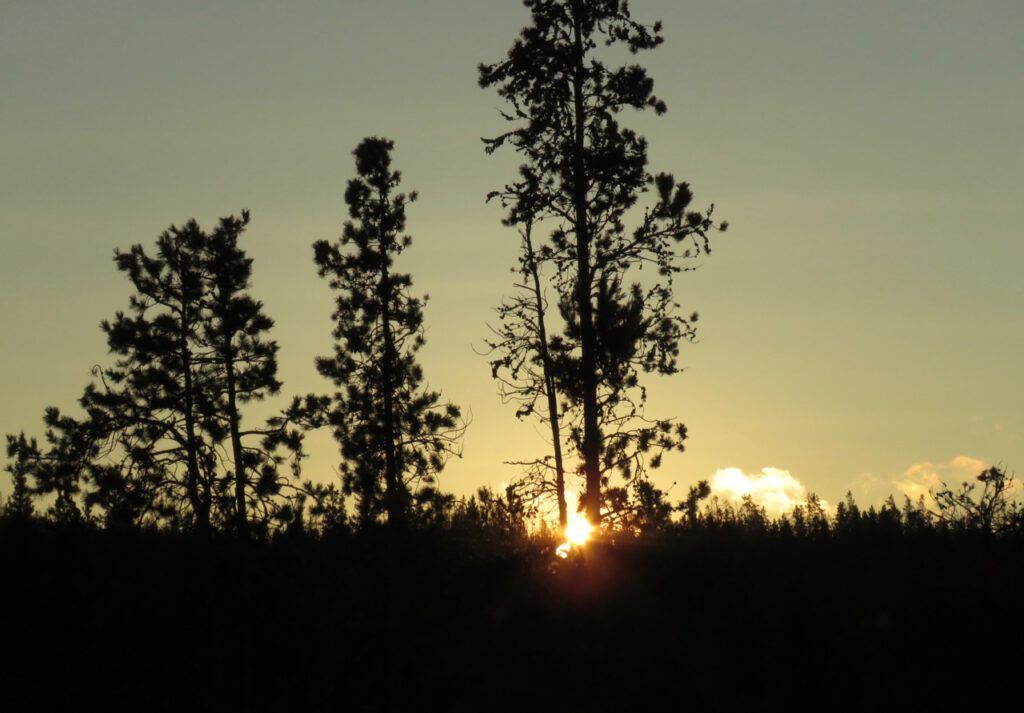 And we finally had pretty colours on the mountains.