Last weekend an SAR Ice Rescue Course was held at Tatla Lake.  Problem was finding the right kind of ice – thanks to our unremitting cold (see previous post) there was too much of it.

In the morning we did theory indoors.  A lot of this was learning knots.  Here are Doug, Clare and Maelin tying “figure of eight on a bite”s. 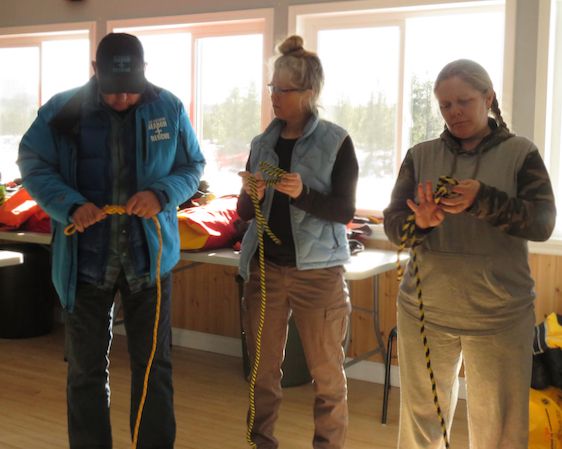 We also learned how to do a prussic knot.  This is a most useful tool.  The black loop is wound a certain way around a bigger rope.  When tension is put on the loop, it holds fast.  When tension is relaxed, the loop can easily be slid in either direction. 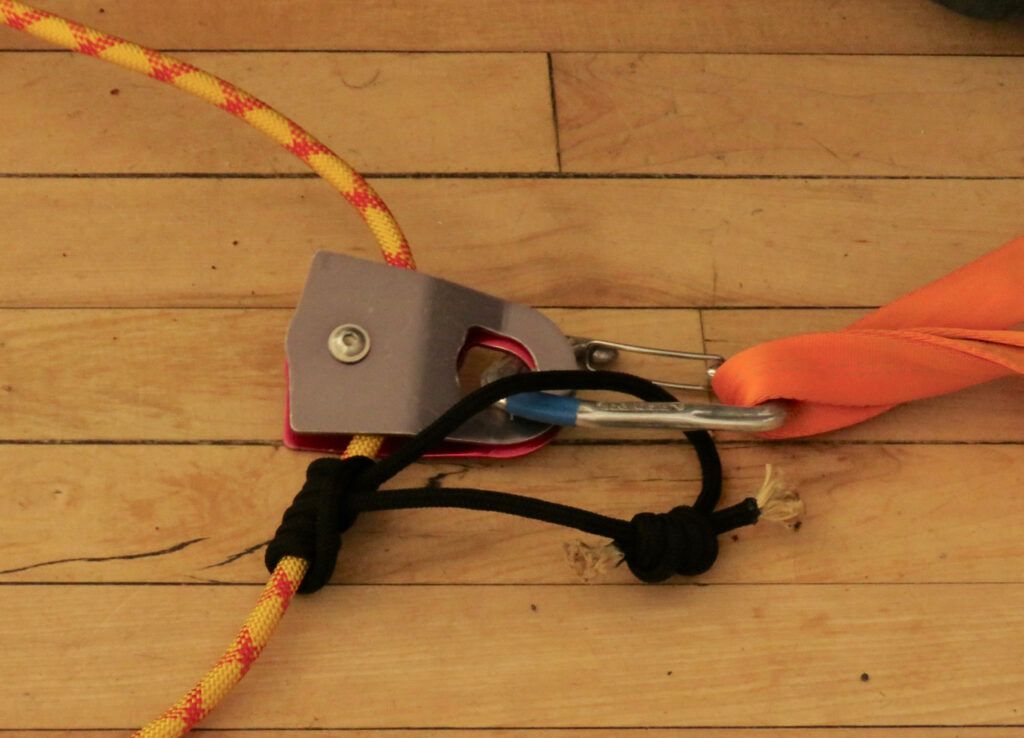 After lunch, we went out onto Martin Lake (Near Tatla Lake). 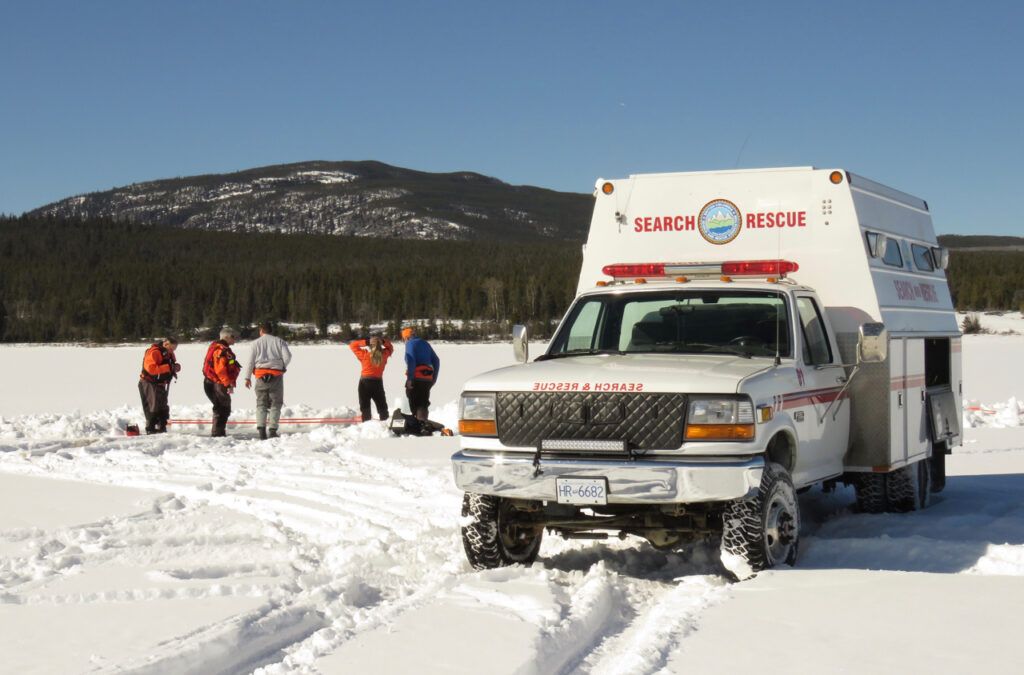 SAR members had gone out the evening before and cut holes in the ice with a chain saw.  This ice was 50 cm thick. 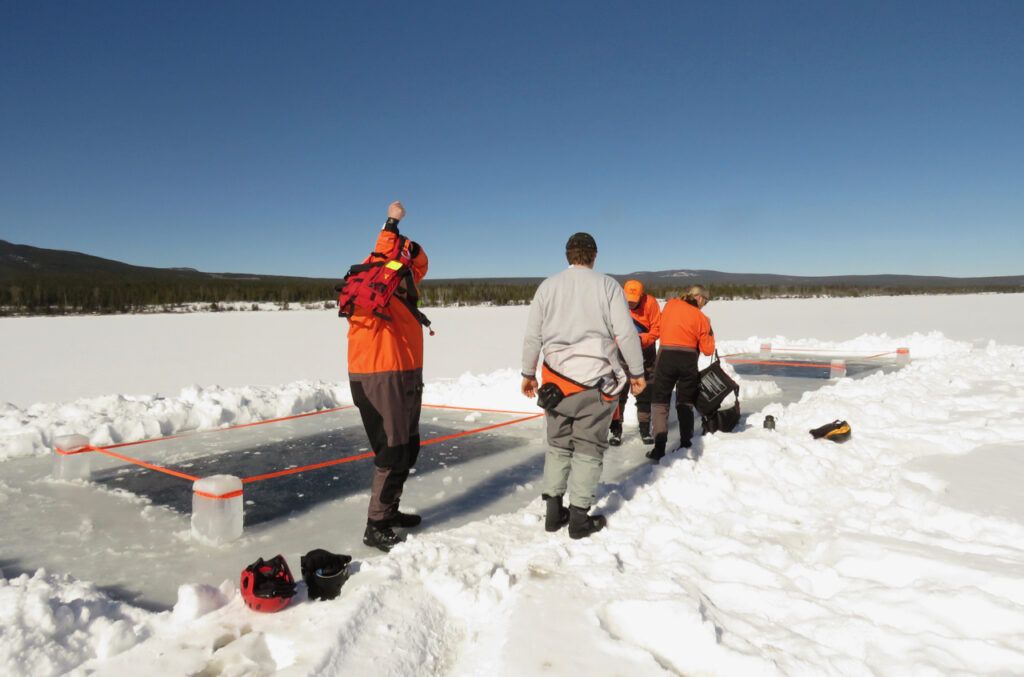 It was the most gorgeous afternoon.  The two of us not getting into the water did not need coats – this despite the -23C temperatures overnight.

Suiting up took some time.  Yellow suits belong to the Cariboo SAR based in Williams Lake.  Four members joined us for the course.  The red dry suits were supplied by the instructors, a company in Prince George called Overhang Rescues.  (Lauren, in green, is one of the instructors – Dean in black is the other.) 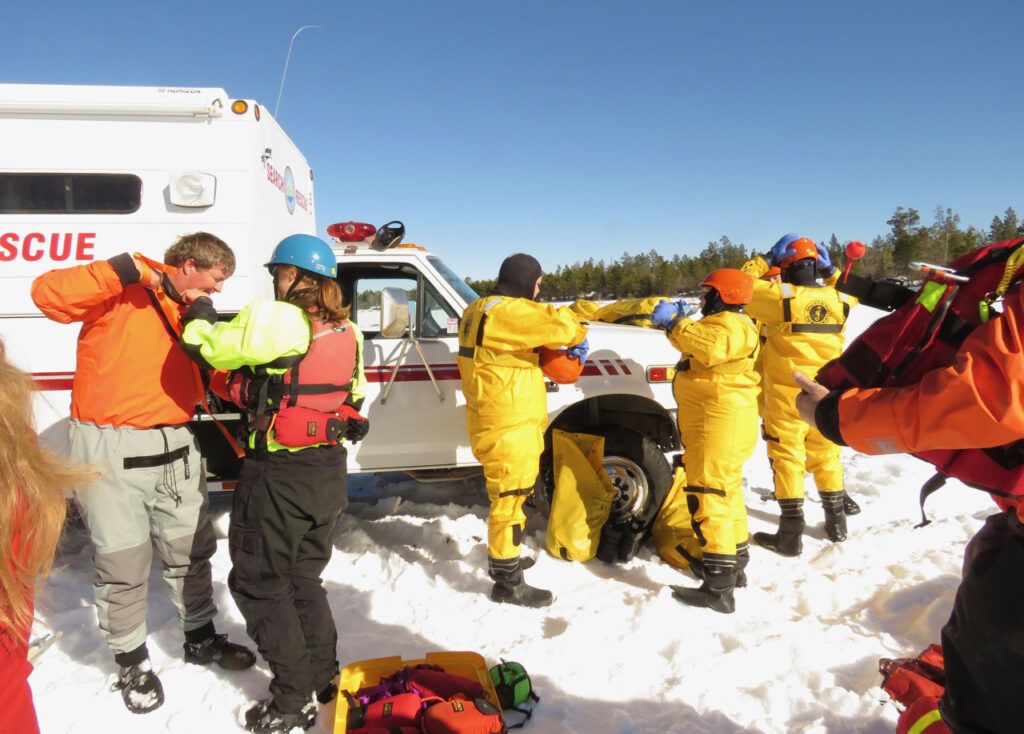 The whole thing with SAR is you are not allowed to rescue someone unless you have the right equipment and have done the right courses.  Response time in our neck of the woods can be several hours (our SAR covers an area 6-hours’ drive long, let alone any off-road travel) and even if we had the equipment, getting ready would take 20 – 30 minutes.  So if someone goes through the ice in this part of the world, and is unable to get themselves out, the “rescue” would in fact be a recovery of a deceased.  However, we all learned a lot about self rescue and possibly rescuing someone who was with you.

People approached the edge of the ice with caution.  But in fact, 5 cm had formed overnight.  Being pure water-ice – ie. not mixed with snow, which would make it weaker, it was already strong enough to hold someone.  Sandra is using a pole with teeth on the end to beat the ice to test it, not only to see if it breaks, but also to hear what it sounds like.  I have done this countless times on my travels in Nuk Tessli. 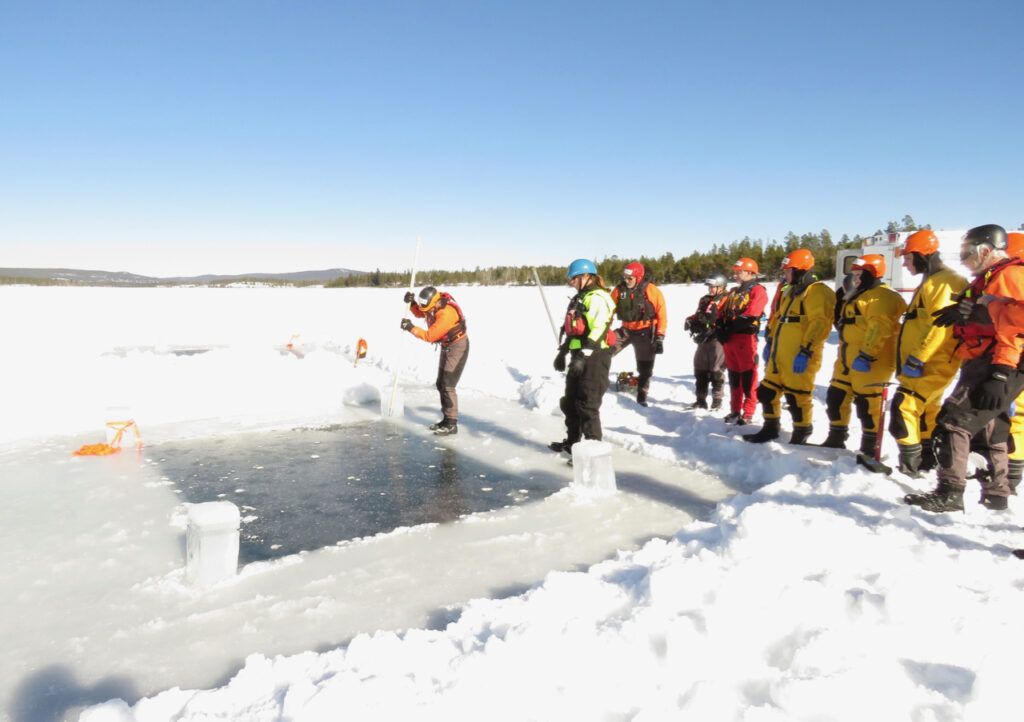 In fact, Sandra had to jump up and down on the ice before she fell in. 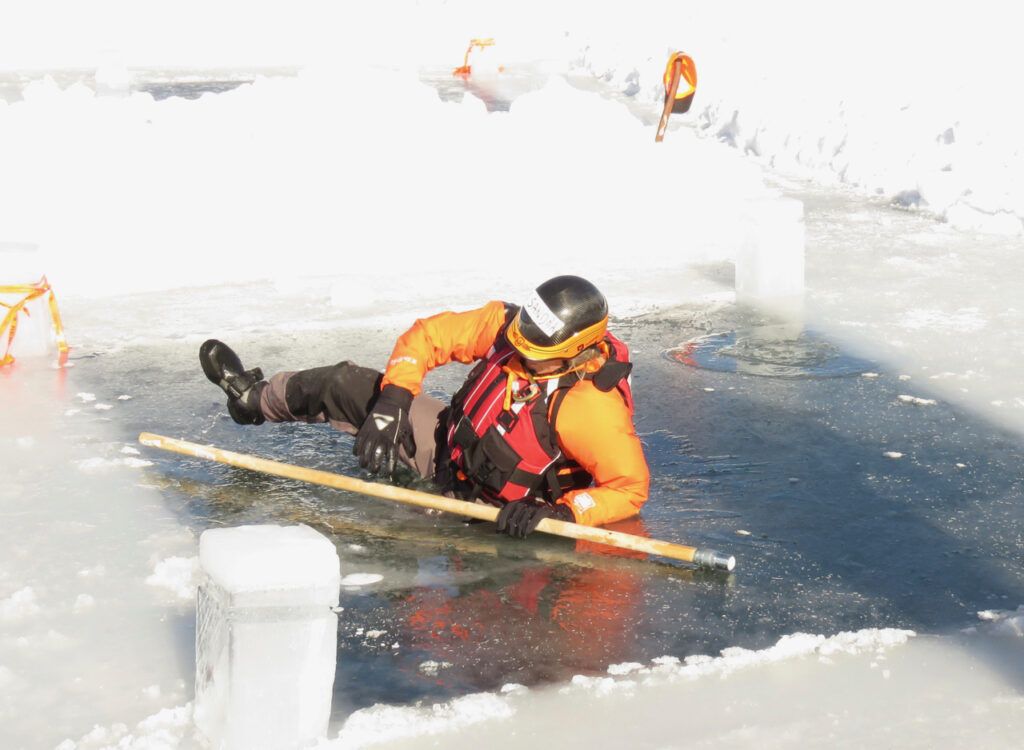 First was to practice self-rescue.  The pole came in handy for that.  Sandy, Sandra’s husband, is using it to get himself out. 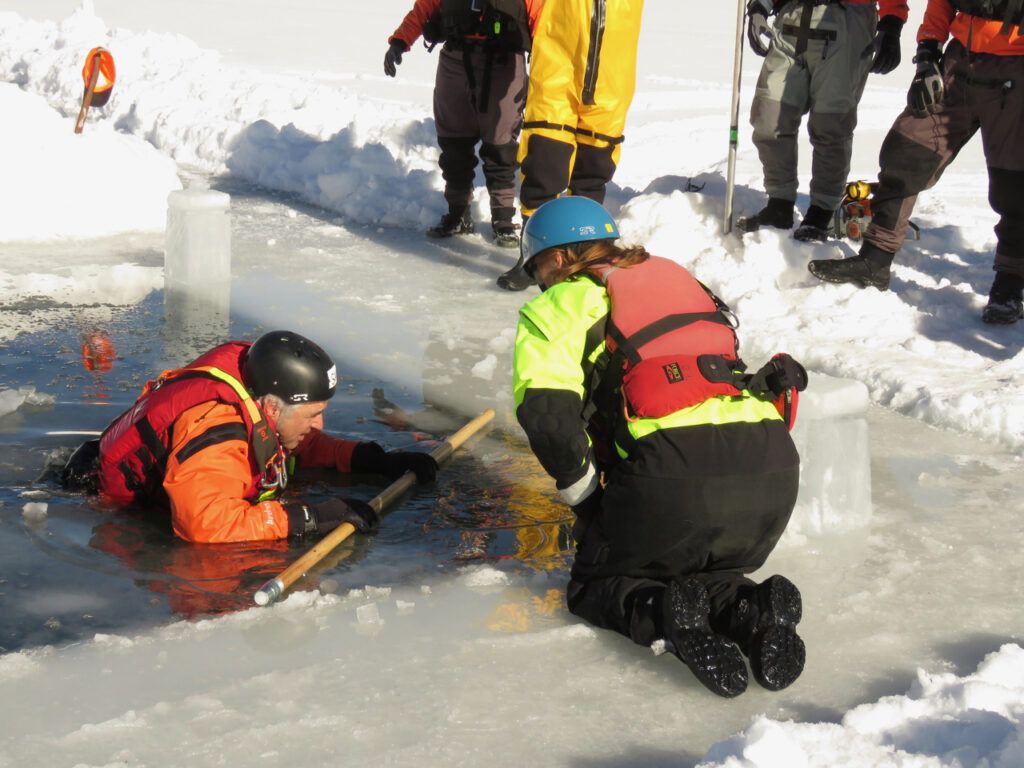 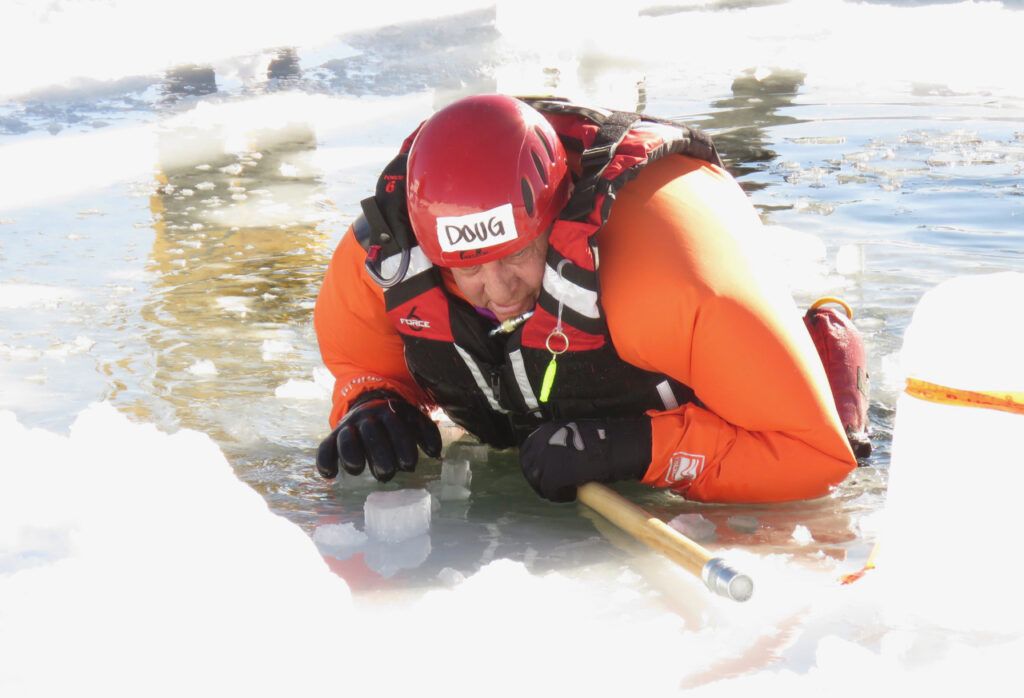 The ice proved to be even tougher on the second hole.  Sylvia is the first to try it. 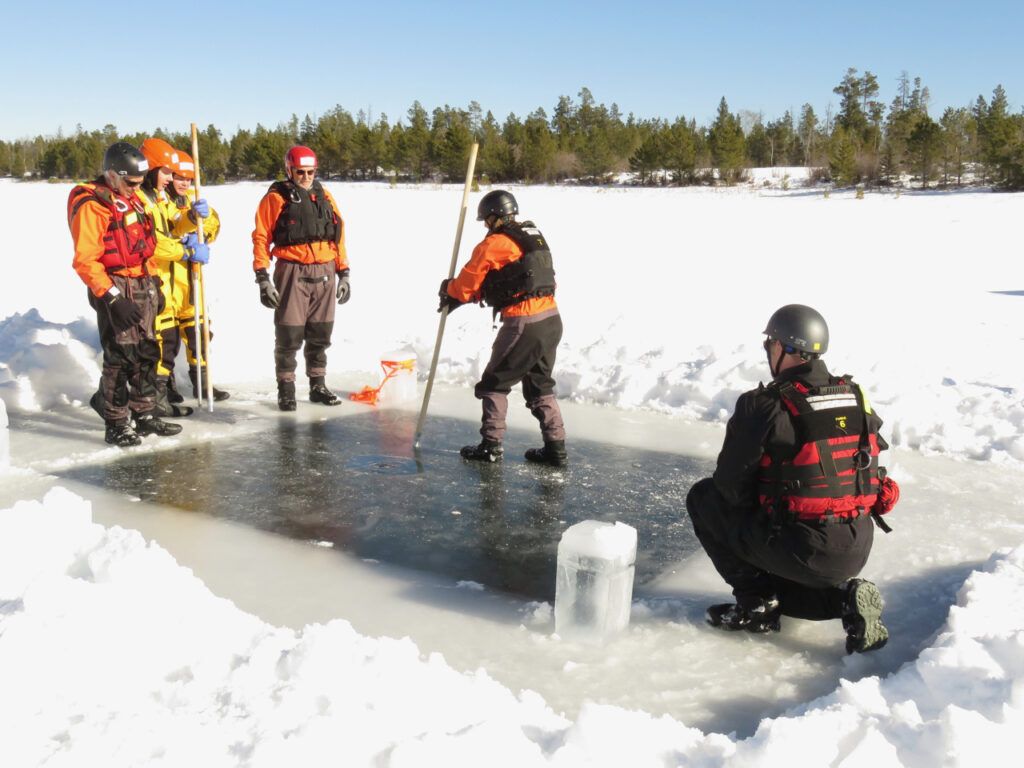 One by one the students tapped their way across but it did not break.  In the end six people stood on it. 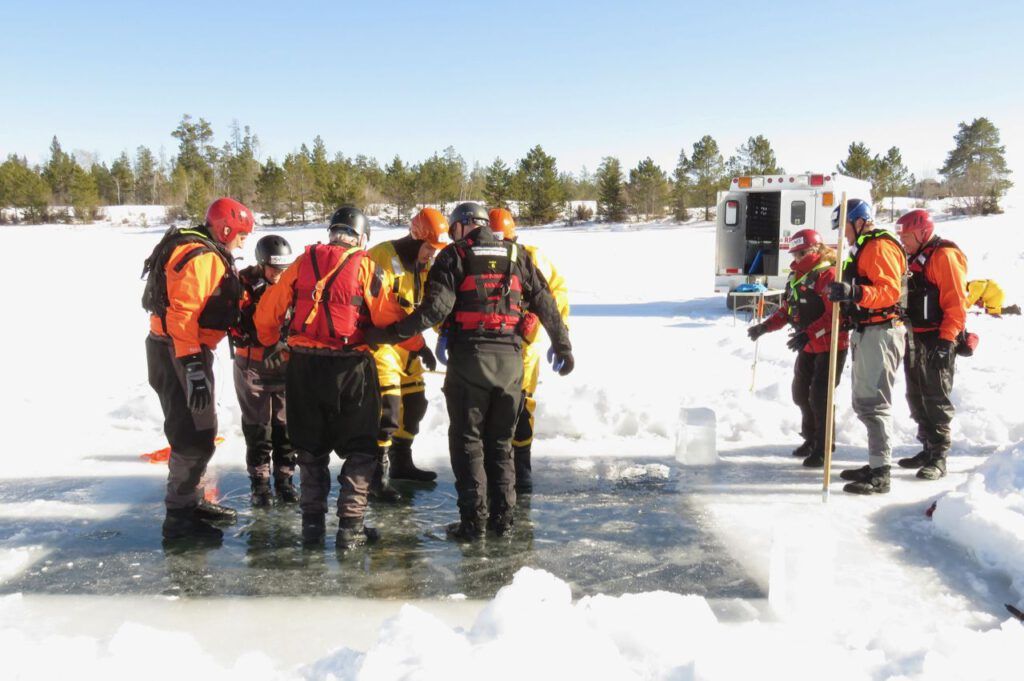 They still had to jump up and down to break it. 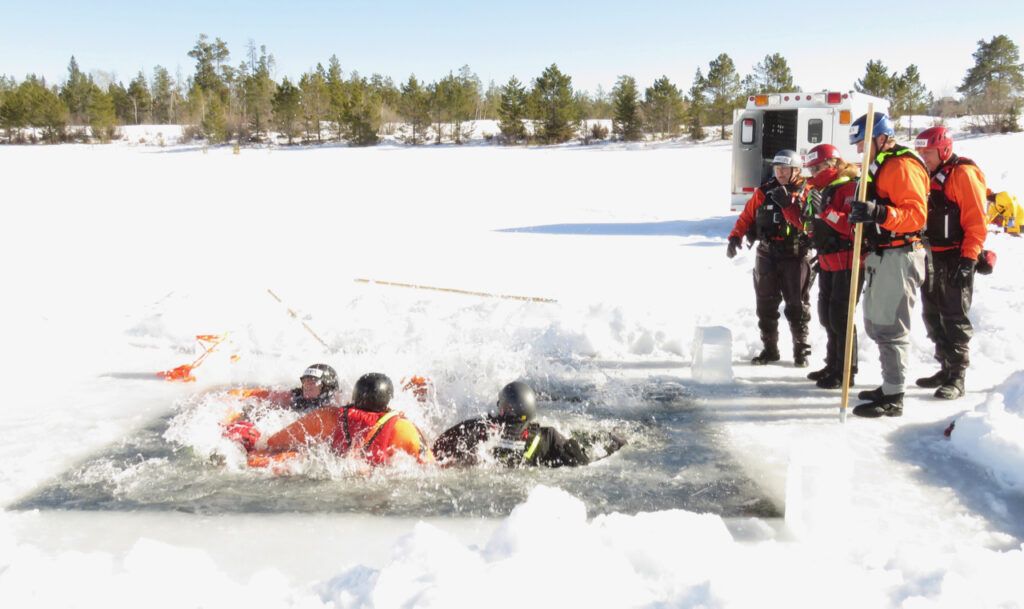 And then scramble to get out! 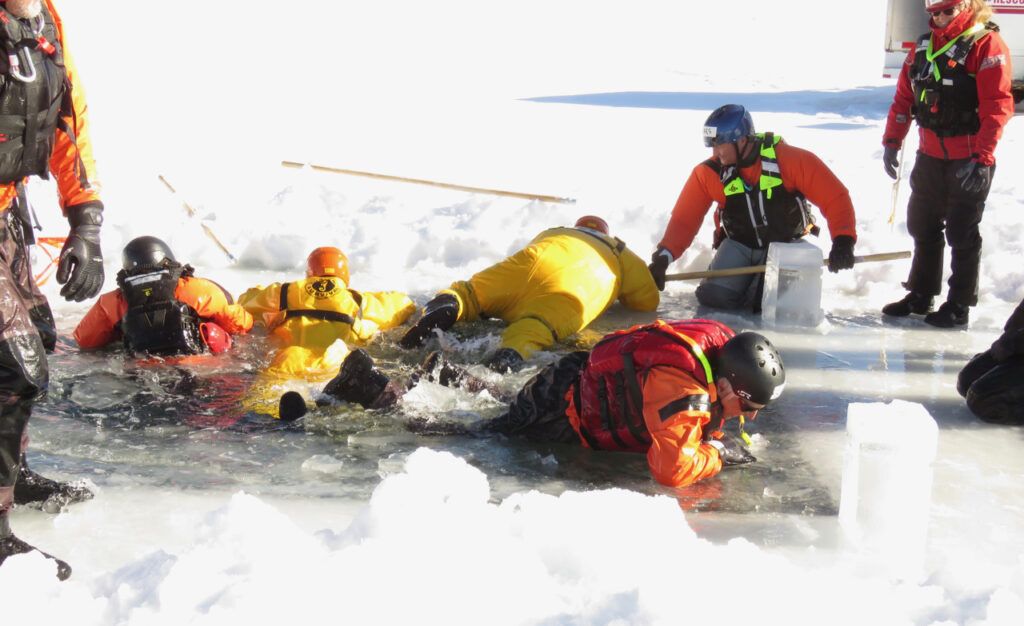 Here is a natty little tool.  You place your thumbs over the blunt end and  poke the points into the ice to pull yourself out.  You can make them with wood and nails.  Very light, and easy to carry.

After the pole rescue, we learned types of rope rescue.  This was a straight pull.  The subject was told to kick to make their bodies more horizontal, but even so it was hard to get out as the bulk of the life vest (and some peoples’ bodies!) caught on the edge of the ice. 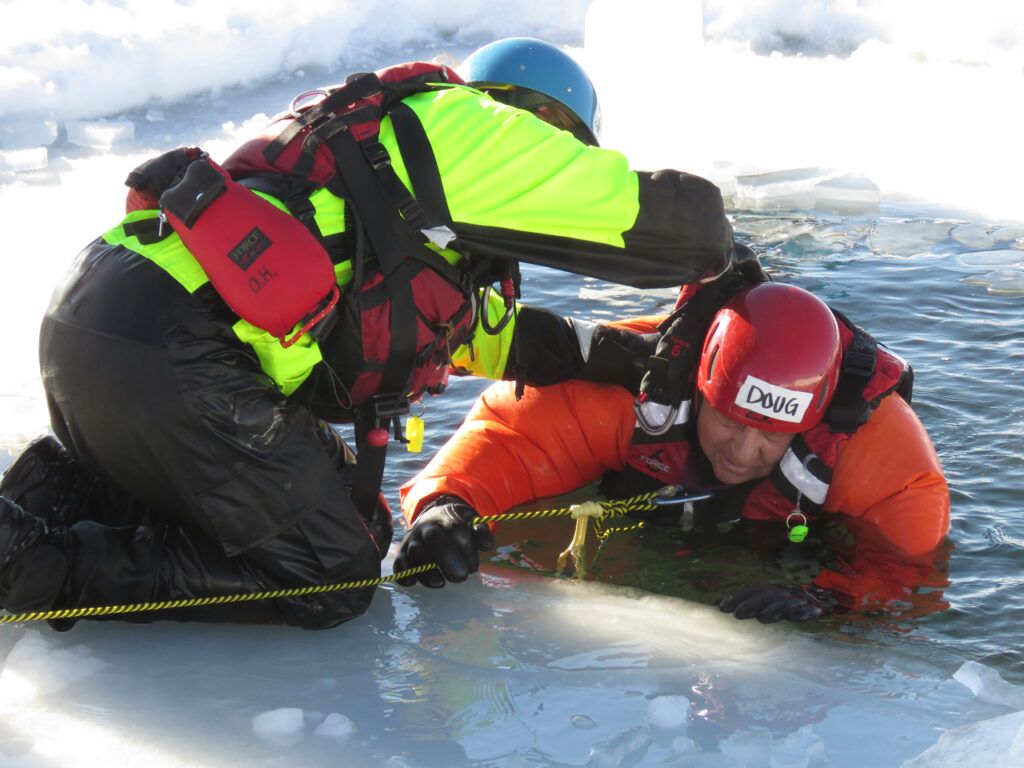 After getting yourself over the edge, you must roll in case the ice was thin. 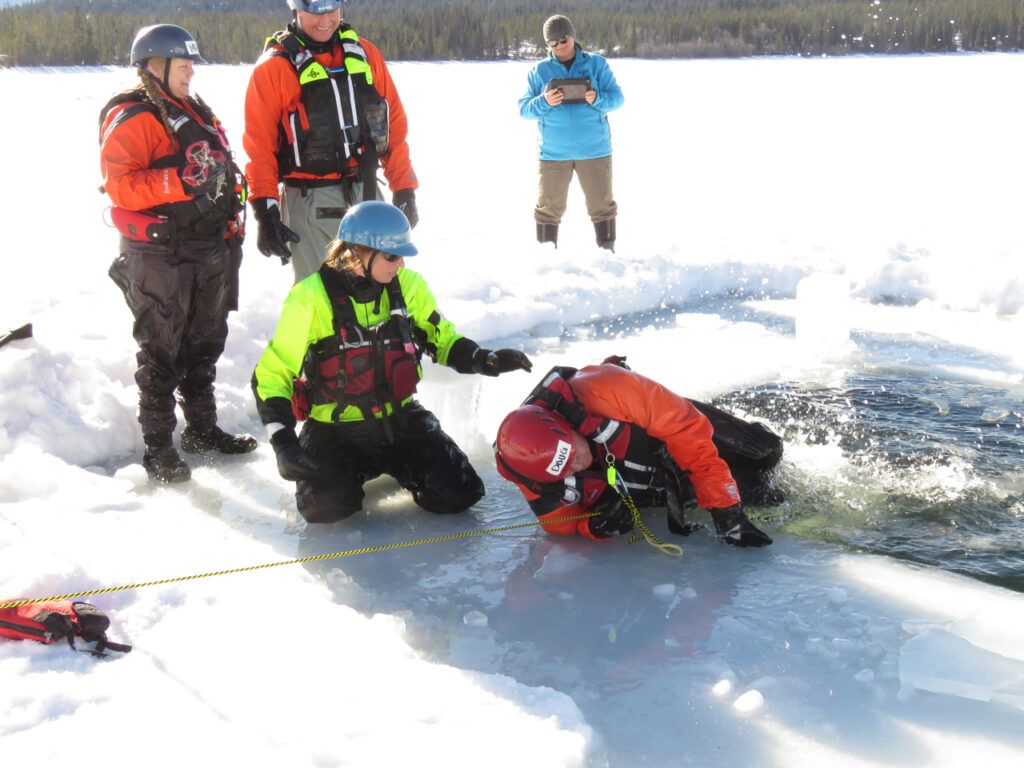 Now we found a use for the prussic knot.  You have this handy loop in a pocket and can strap it on the rope, or even place it near your harness before you get into the water.  Ryan hauling himself out. 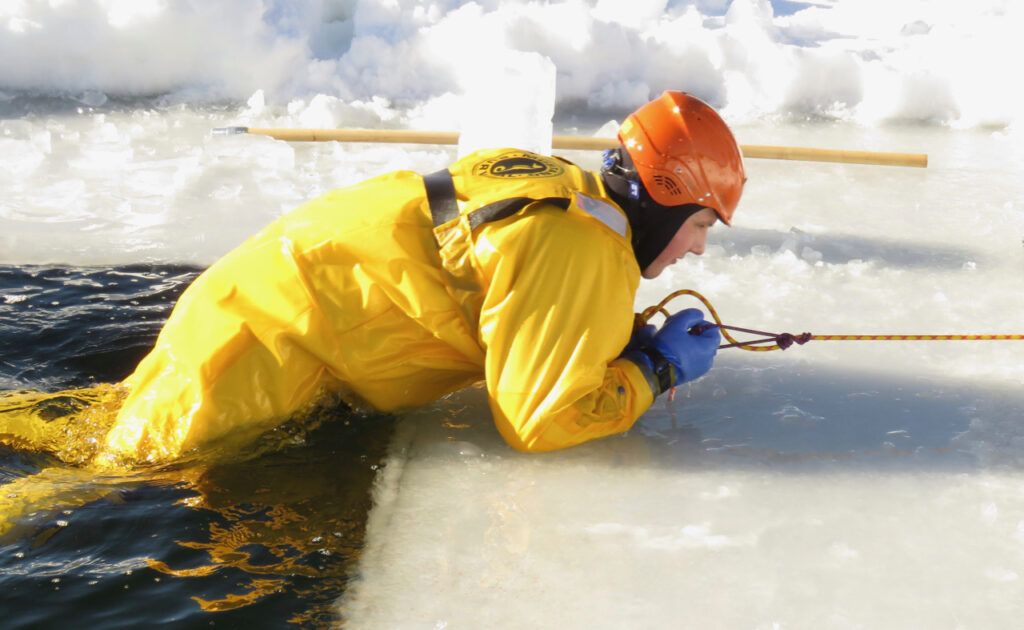 Sylvia sliding the knot ahead for the next pull. 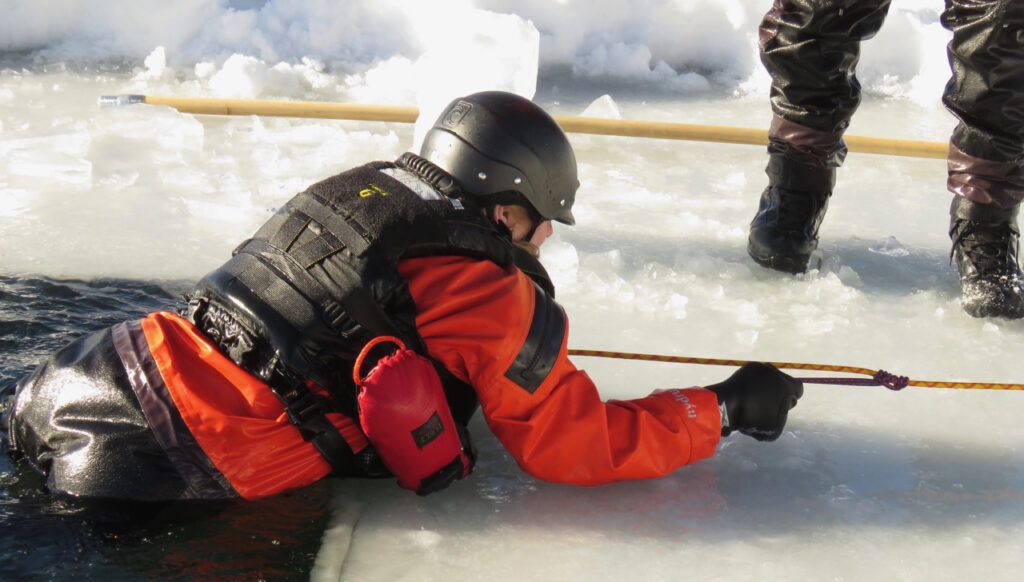 That was, basically, the end of day one.

Another -22C morning, but cloud presaged a change in the weather.  It was also the date of the clock change.  I had chores to do before I left and so did many others who were ranchers.  So it was a scramble to get to Tatla for 8.30. 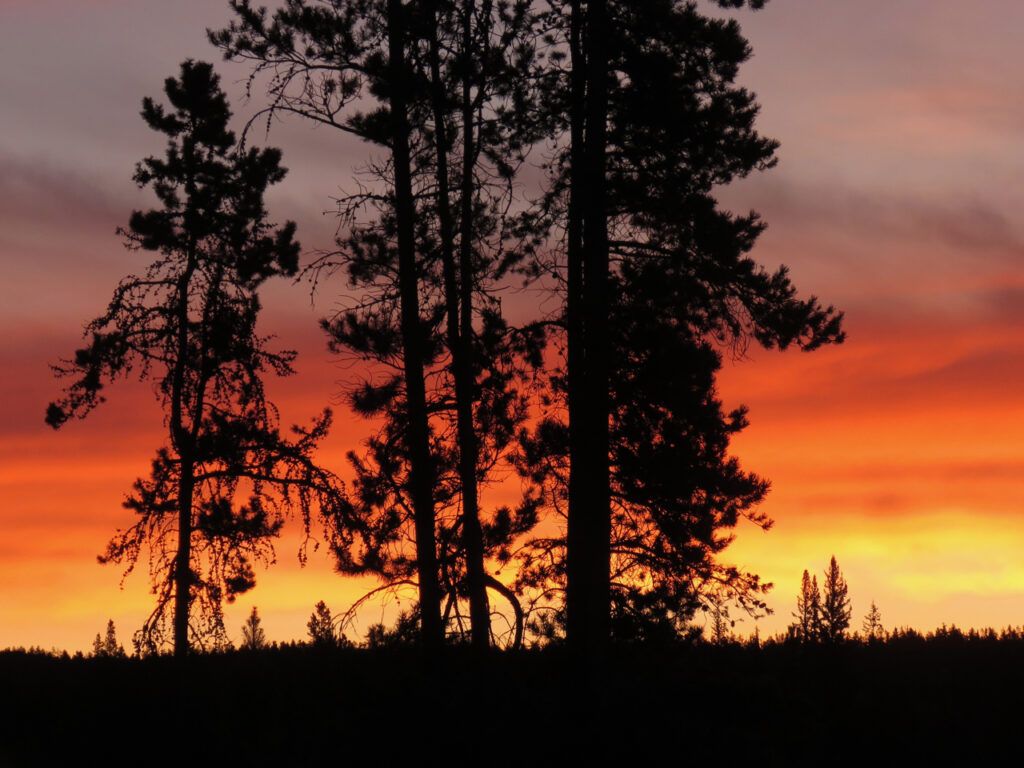 As on Saturday, we spent the morning doing theory.  We learned the most amazing pulley rig.  The orange tape is the anchor.  It is held together with a carabiner into which are clipped a pulley and prussic knot.  The little pulley can be opened – you don’t have to thread the rope.  It also has corners – this stops the prussic knot sliding through.  It is known as a prussic knot minding pulley. When tension is taken off, the prussic knot automatically stops the rope sliding back.  The second pulley is fastened to another prussic knot that can be slid along the rope as needed.  This tool can move an enormous weight.  I’ve used a come-along for years but this combination is just as powerful and is far quicker to re-set.  I have ropes – I have already ordered the carabiners and pulleys.  I will be hauling logs with this all summer! 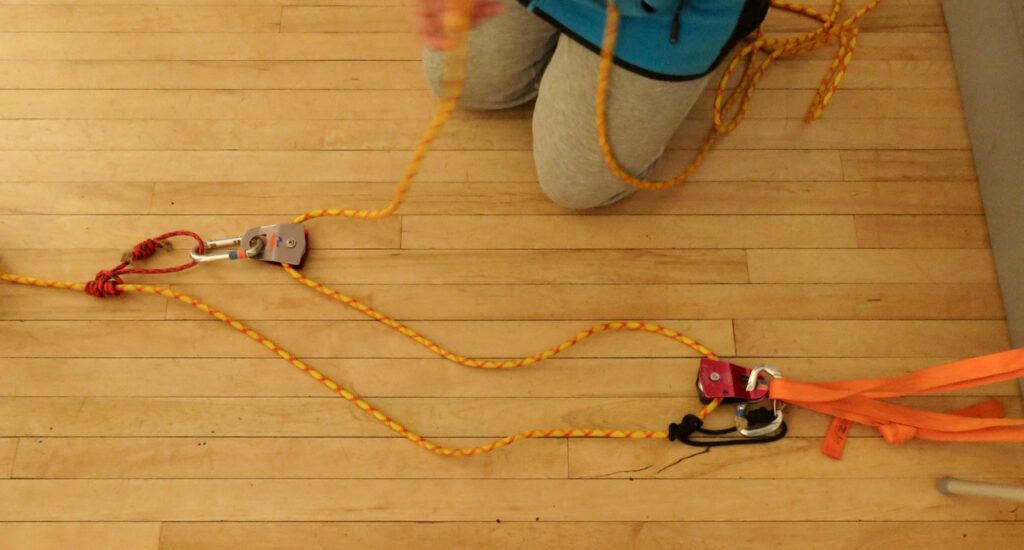 They wanted ice with a potentially weak edge.  “Swiftwater” is defined as water moving more than 1.99 km per hour.  The spot chosen was supposed to be beyond the boundaries of this course, but open water was so hard to find that we had to use a river faster than ideal.  Even for this, we had to drive an hour east.  The morning’s clouds had built to an overcast. 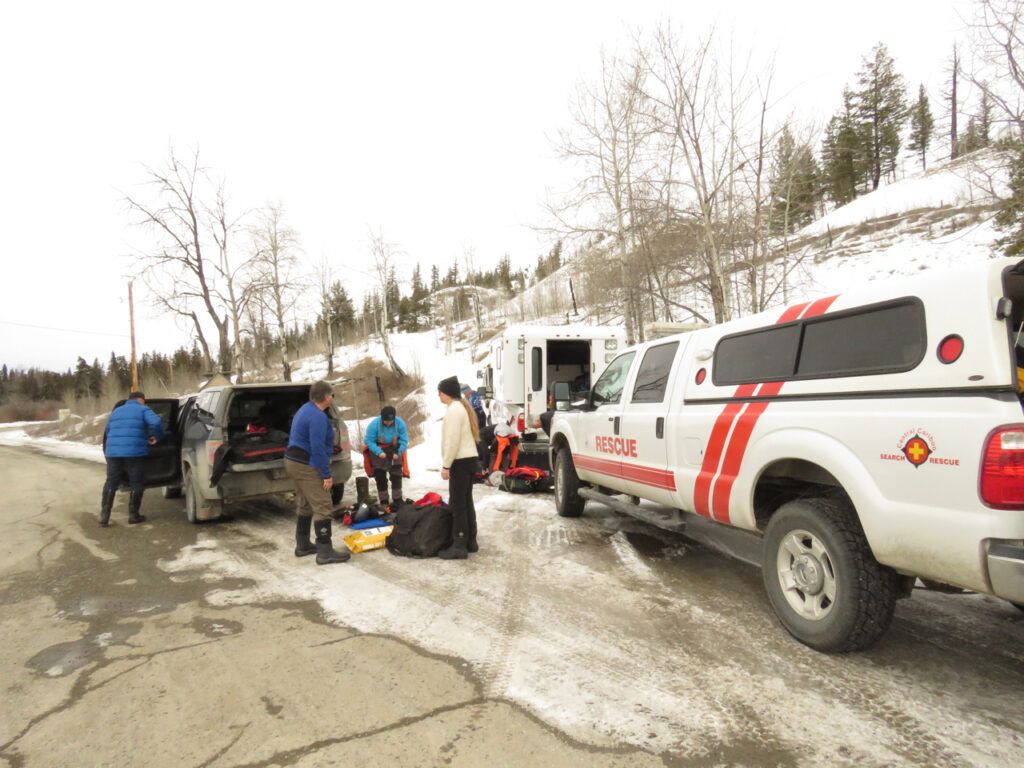 The Williams Lake suits were very hard to get into. 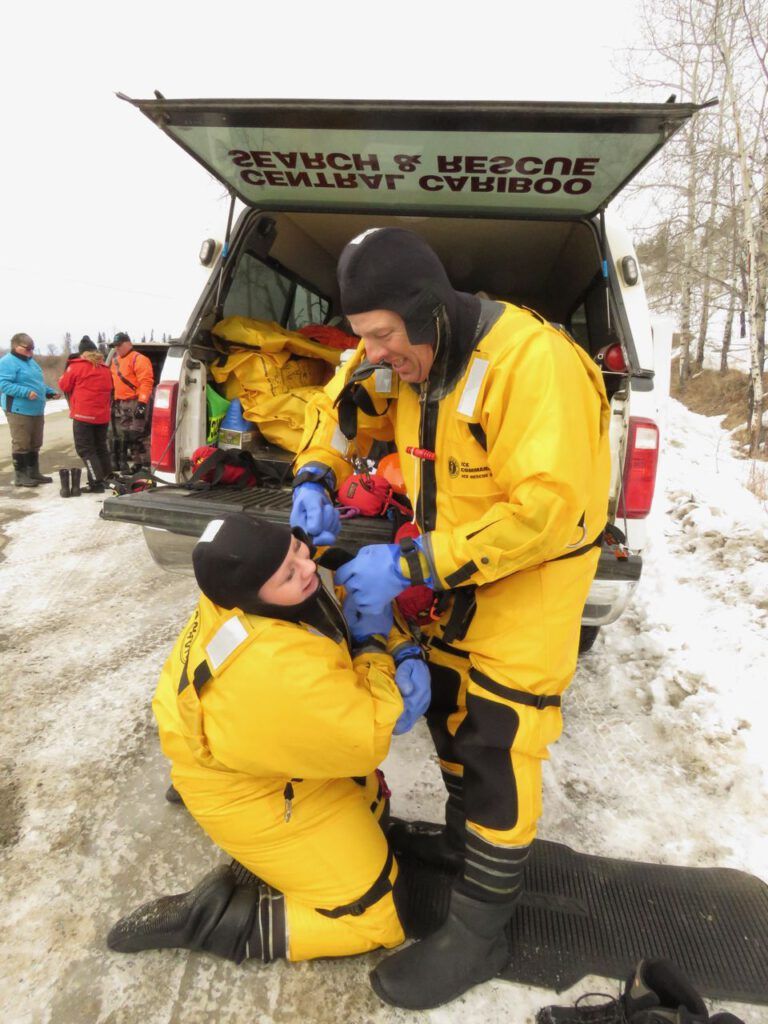 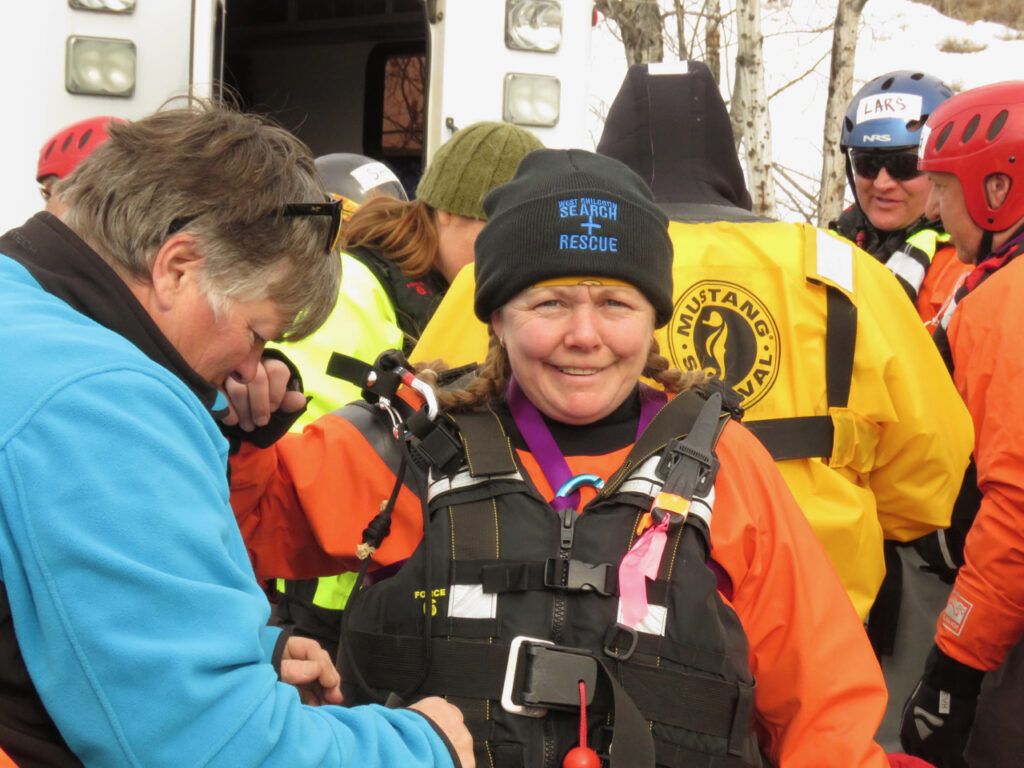 Now she’s ready for anything! 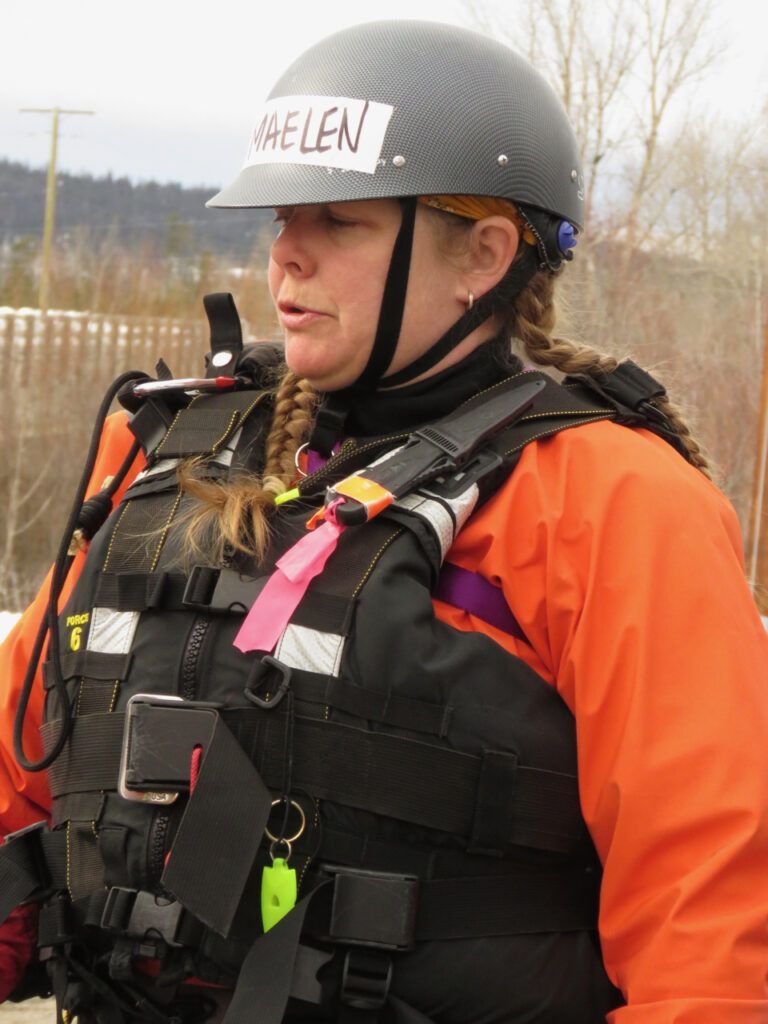 As I was not wearing the official equipment, I was not allowed onto the ice, but had to stay on the bridge.  Down went the erstwhile rescuers. 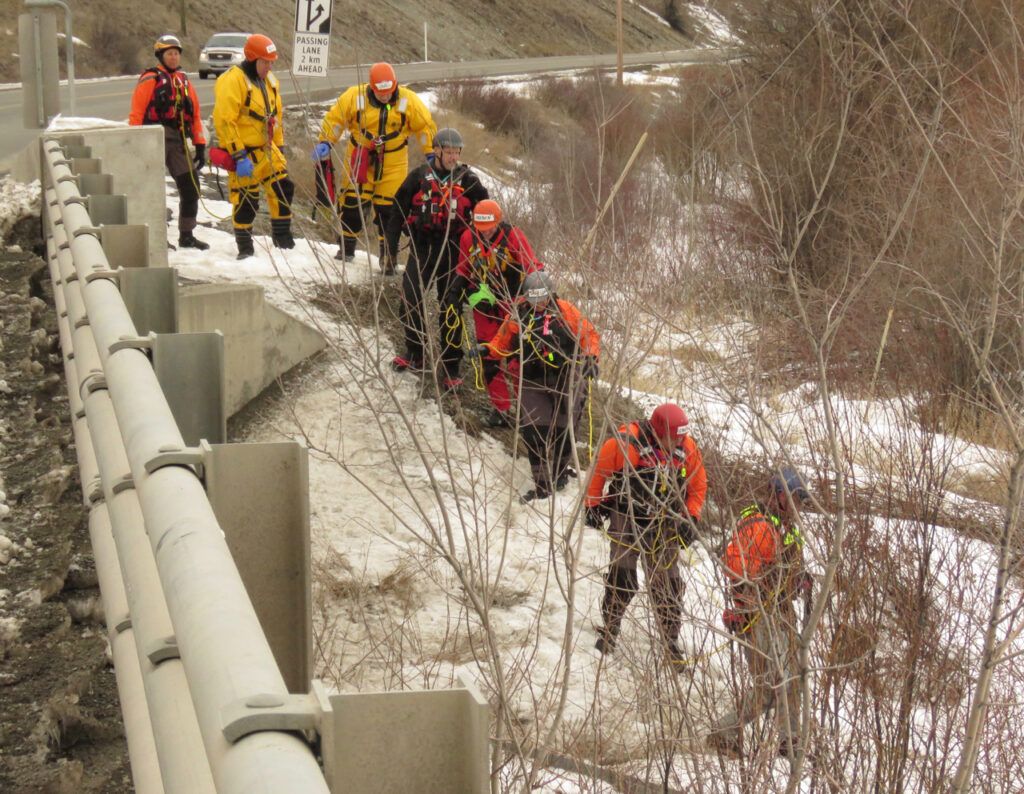 I could see well enough but could not hear what was said so no doubt missed some of the finer points. After some time, someone ventured towards the open water.  They told me it was a lot more scary than being on the lake. 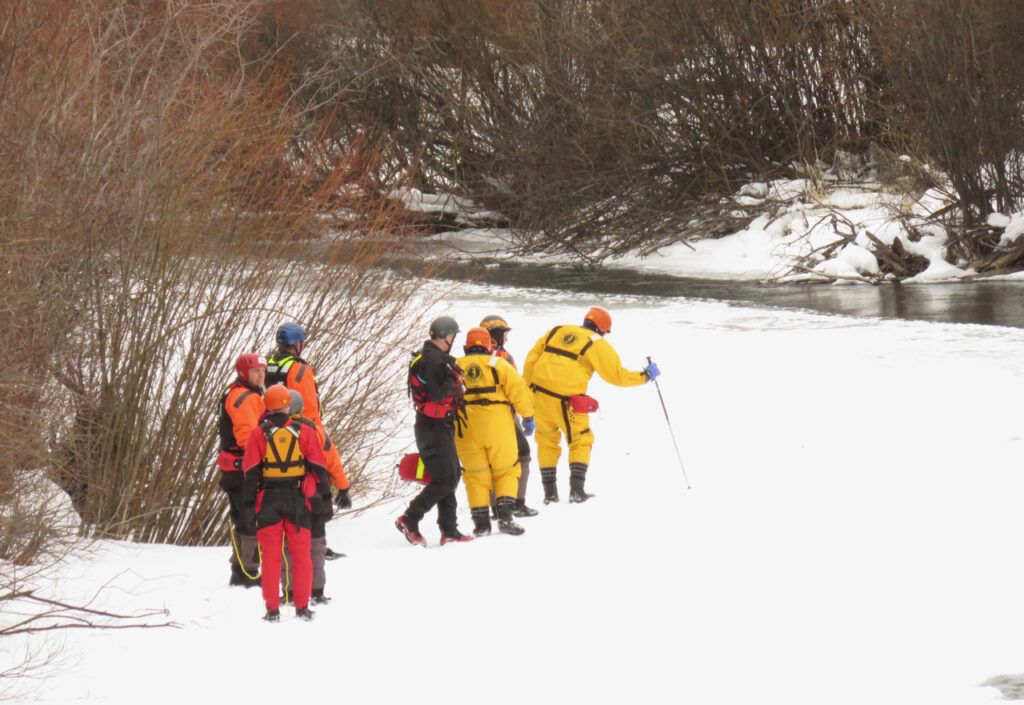 One by one, everyone tested to the edge, then knelt and lay down.  Sandy is carrying a willow stick to test the depth of the water. 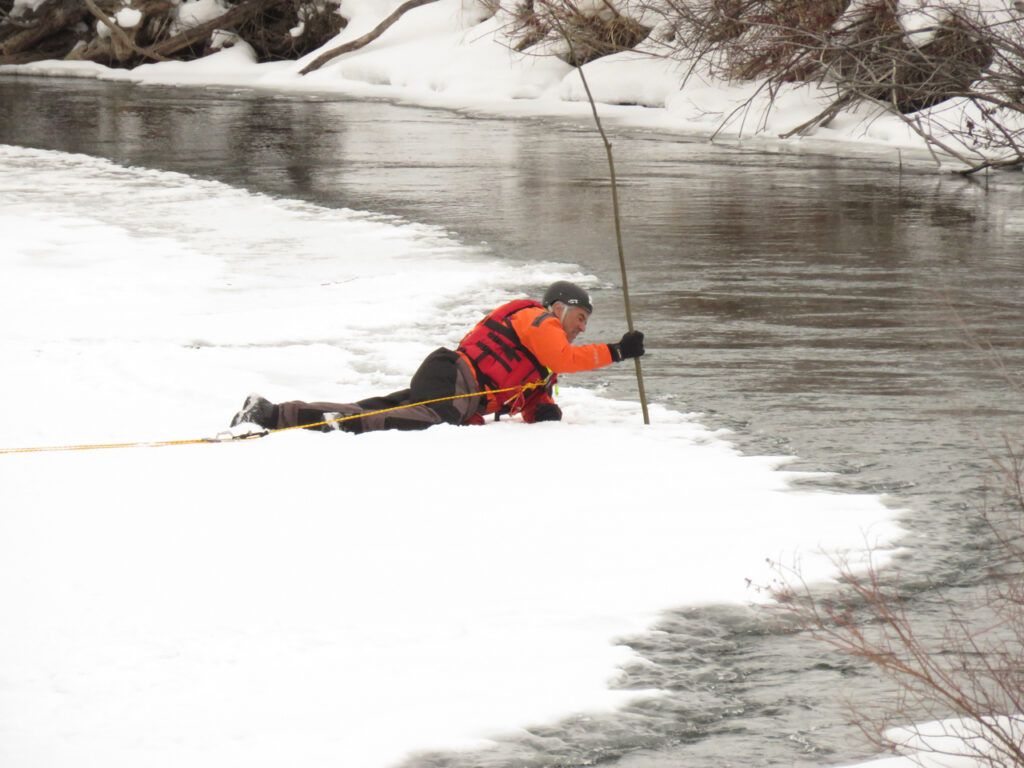 He is now raising his arm and circling it to tell his c0-workers to reel him in.

They all went through the same types of rescue as the day before but now they used the pulley rig as well. 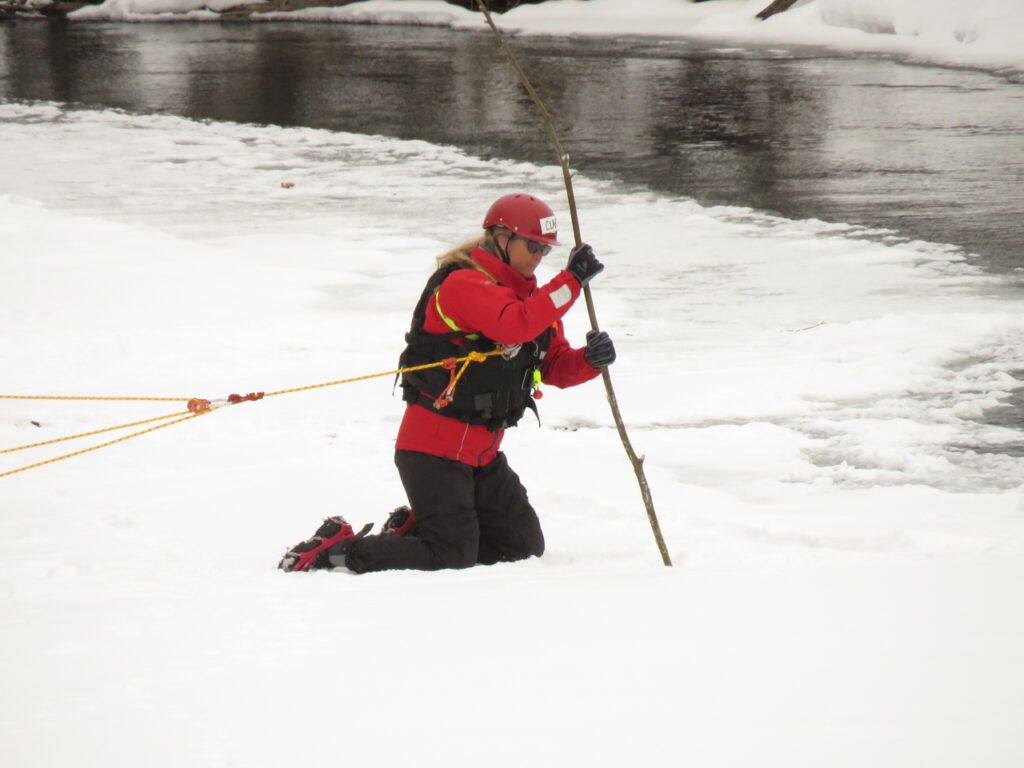 Now Clare is in the water, hauling herself out with the spikes.

Thin ice was expected, but in fact the edge was solid.  Soon everyone was standing on it with abandon. 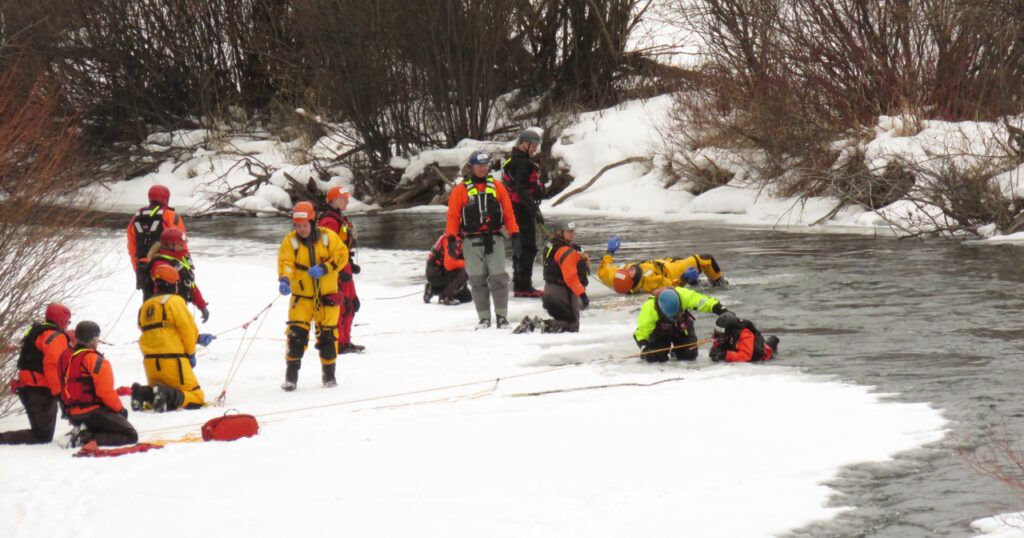 Finally they practised hauling out an inert person. 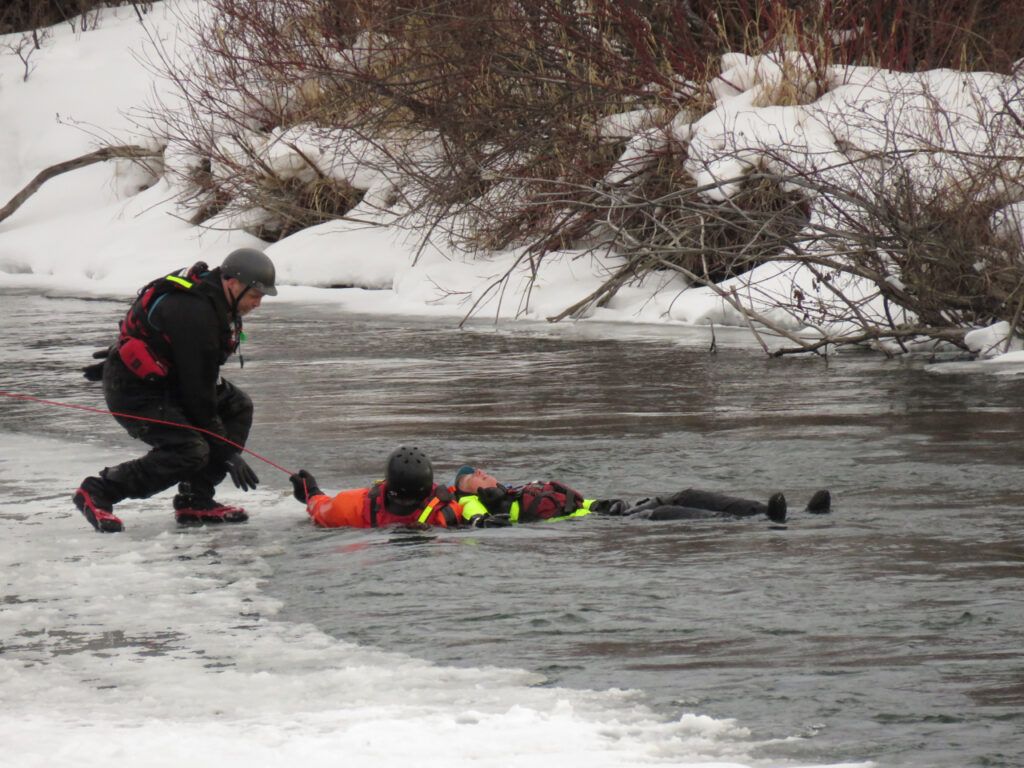 At the end of the day, we were all cold, even Selma and I standing on the bridge.  That last cup of coffee was very welcome! 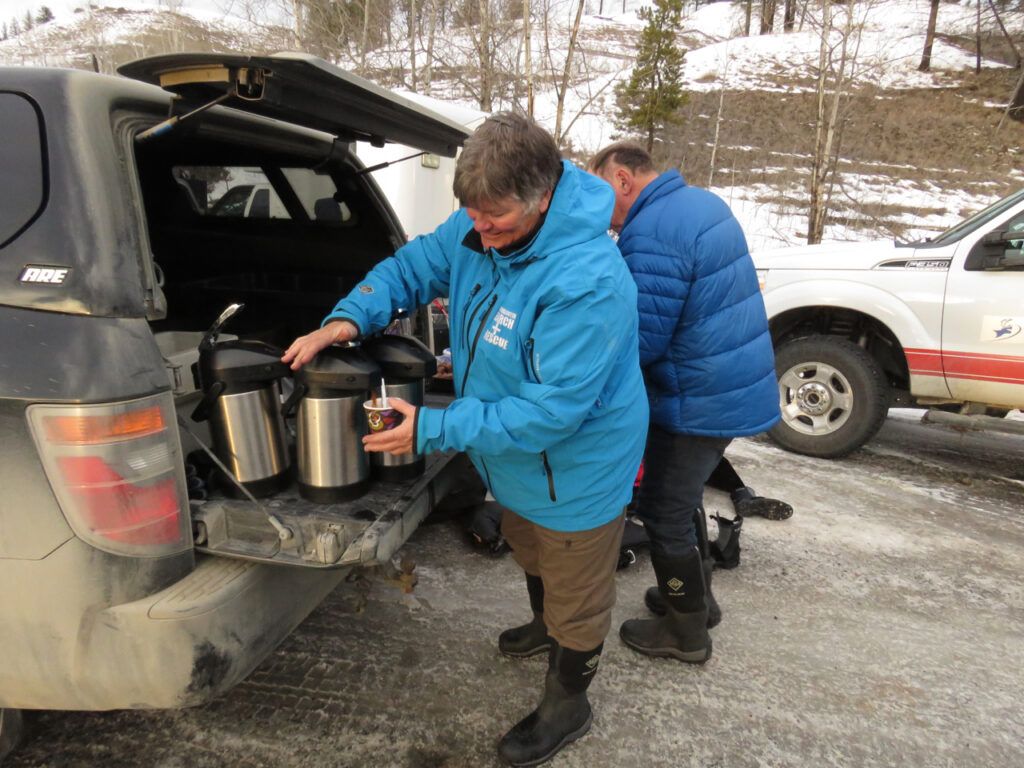 Still daylight, but because of the clock change, it was now late, and dark by the time we got home.  Many of the ranchers still had to feed, so it made for a very long day!