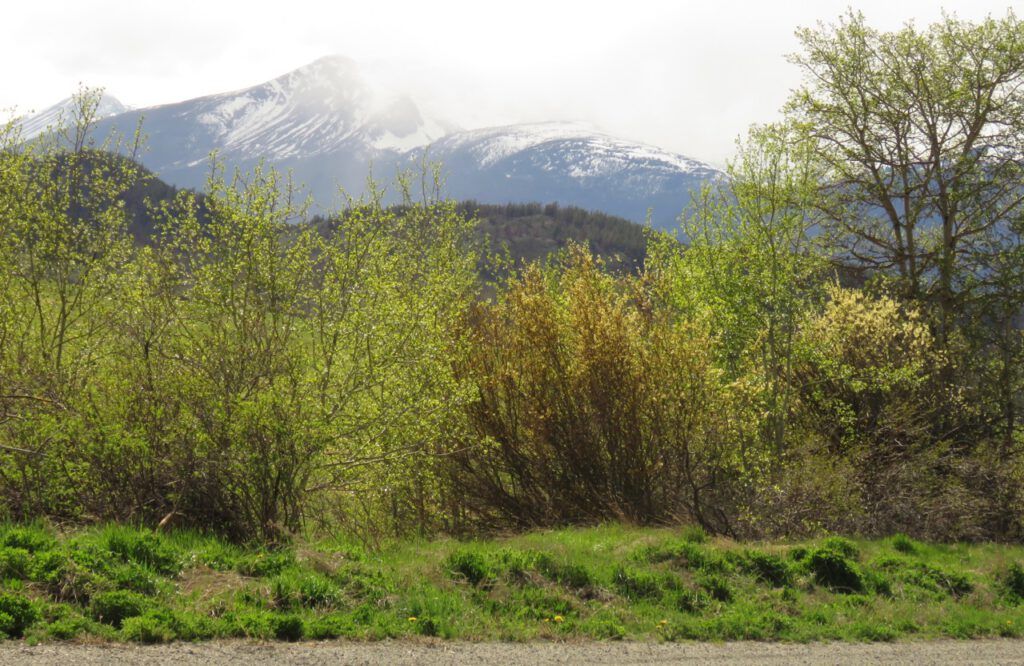 The greening of Ginty Creek pretty much happened in a week.  Although it sometimes freezes at night, day temperatures are now consistently in the low to mid twenties and the wind often blows strong.  Will it be like last year where early June was gorgeous green and the end of the month was crispy brown? 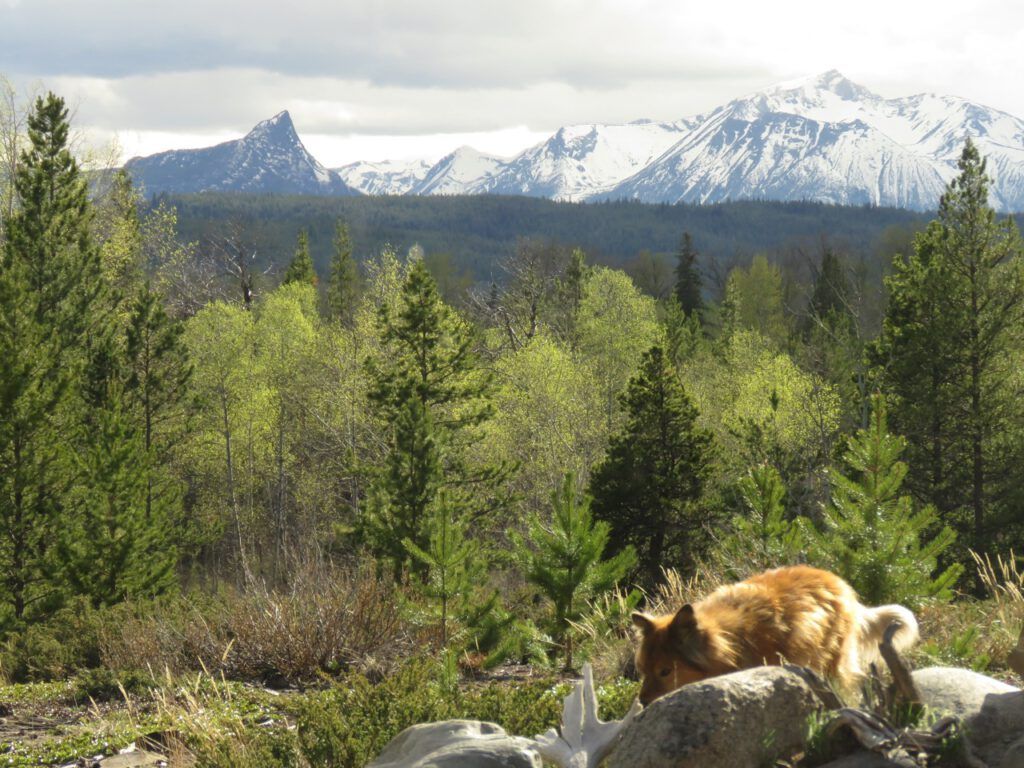 I went to town.  Didn’t have to be in at the garage by 8.00:am so I left late enough to see the early sun around home.  Slabs of mist made some of the driving tricky, but made gorgeous effects when I wasn’t actually in them. 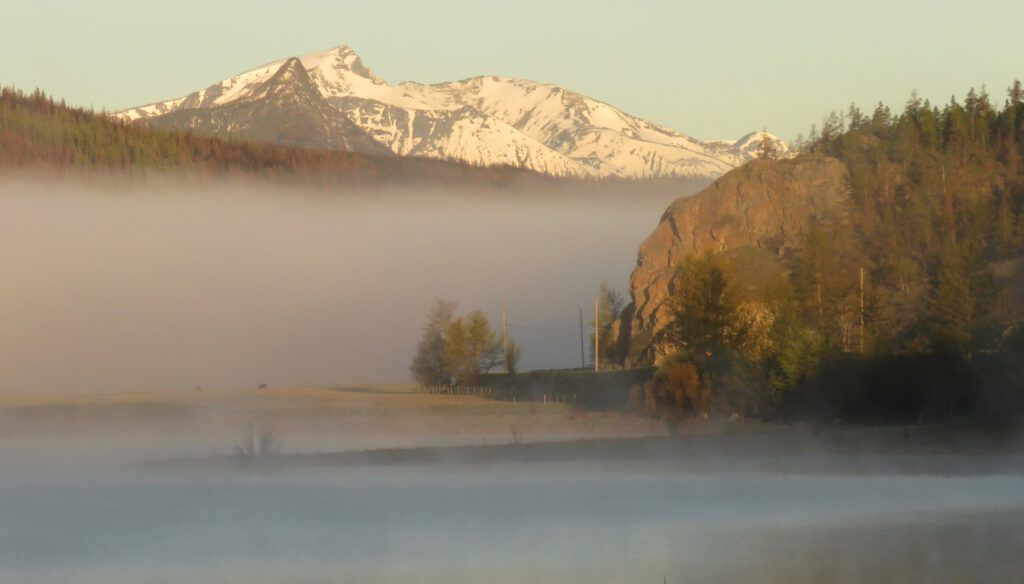 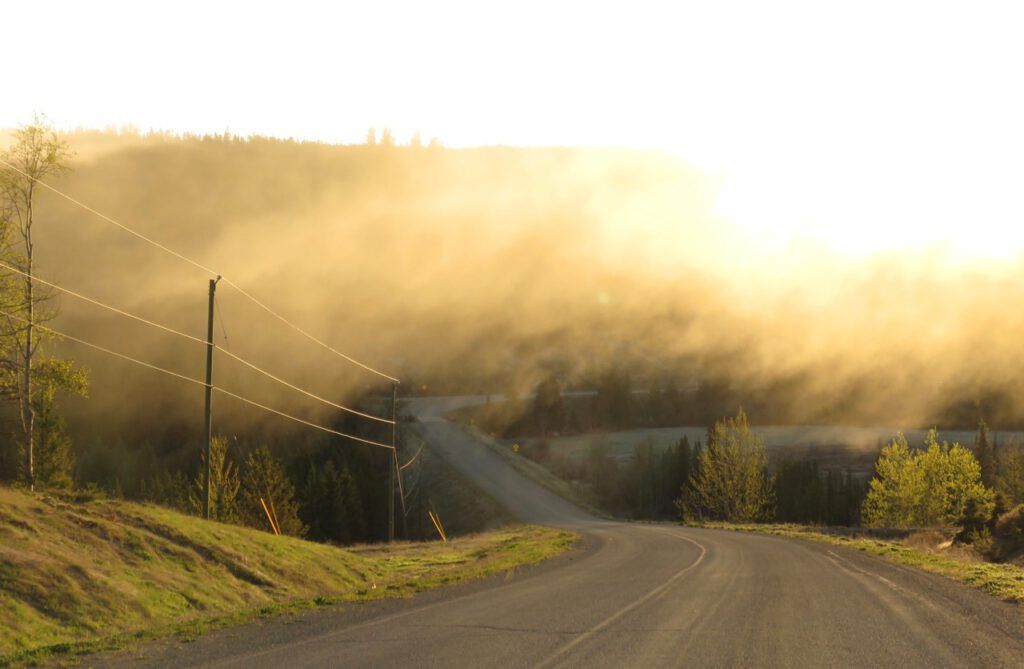 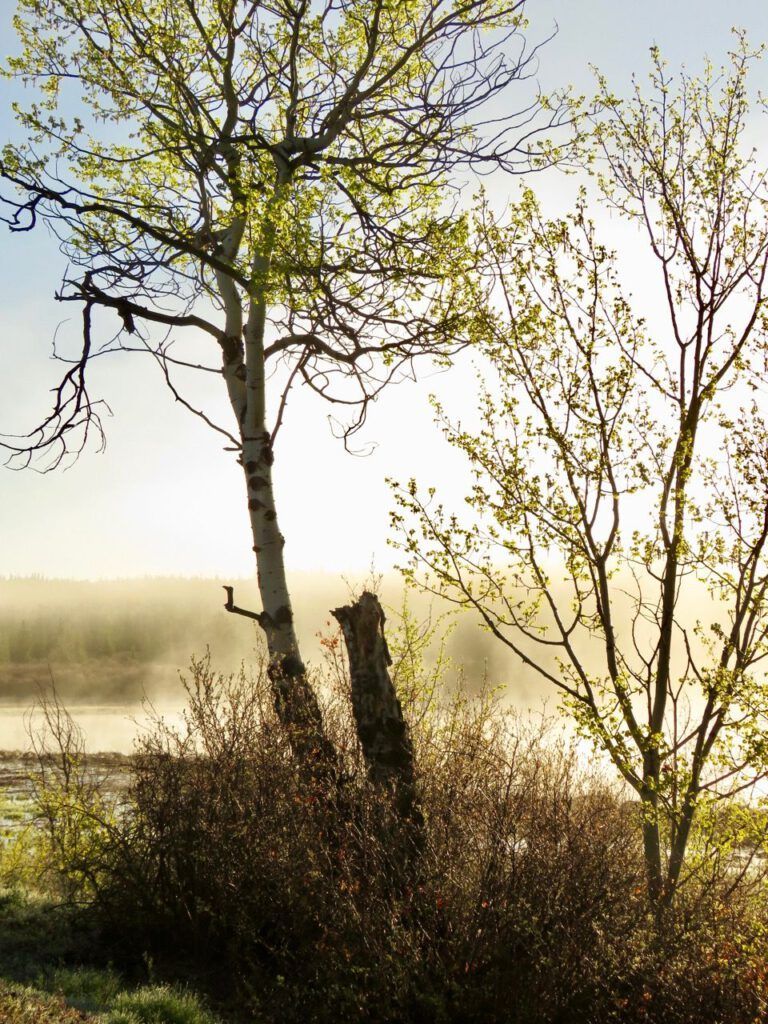 The aspen catkins are now joined by leaves. 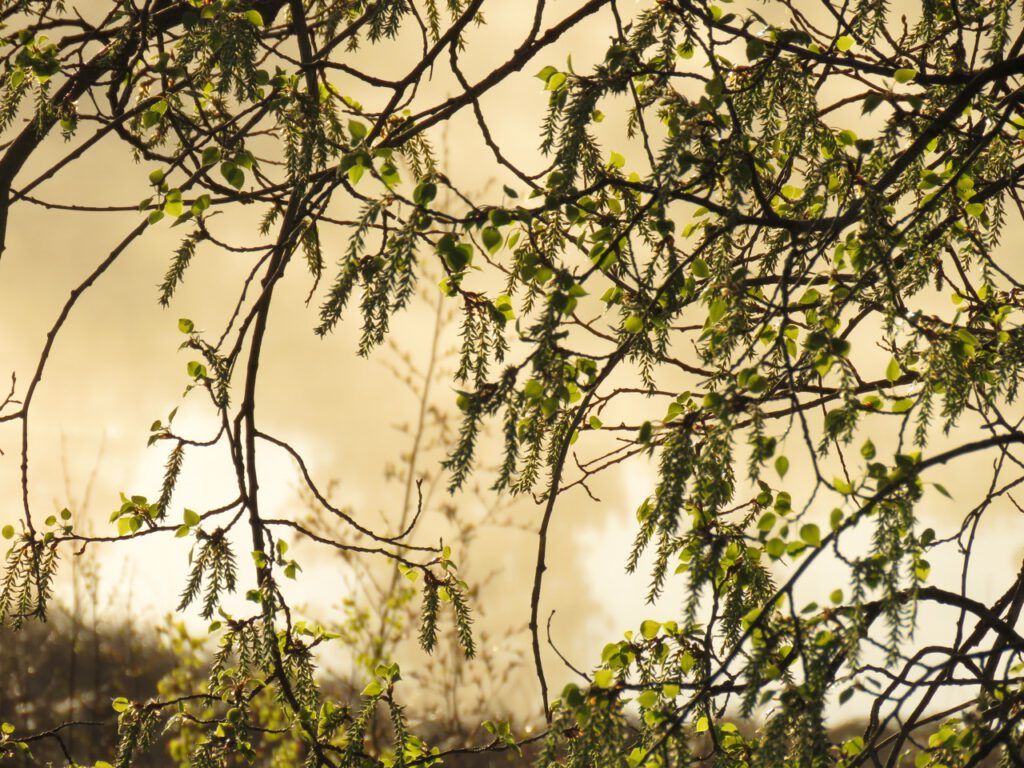 A little over 2 hours into the drive, I entered the burned areas. 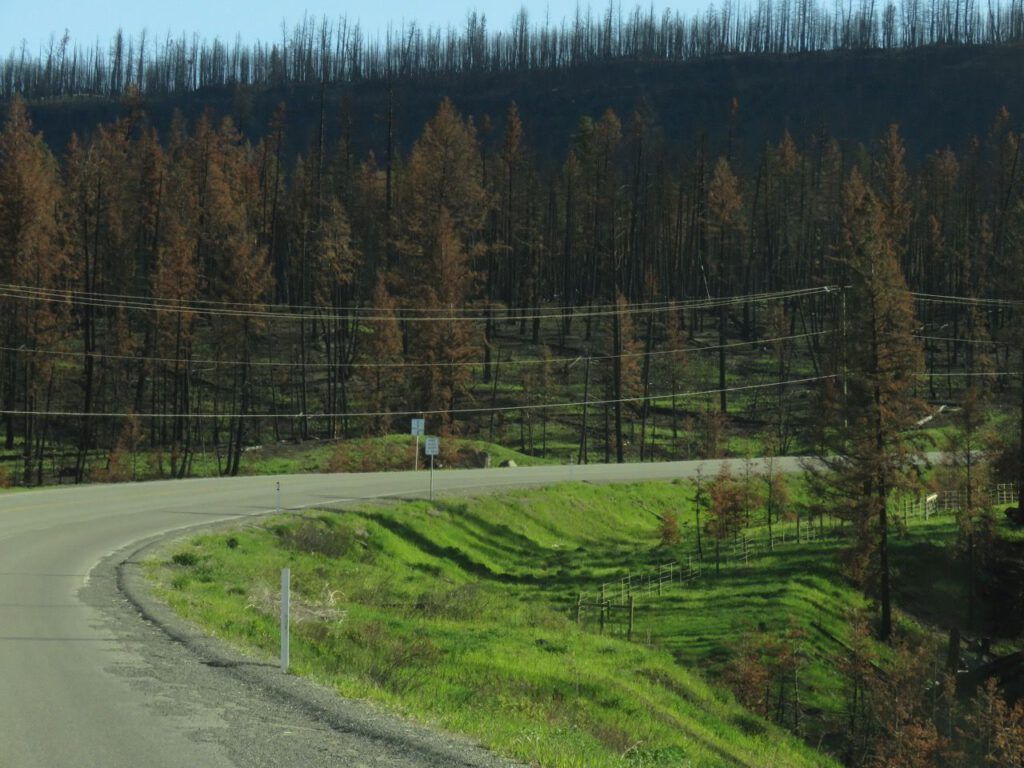 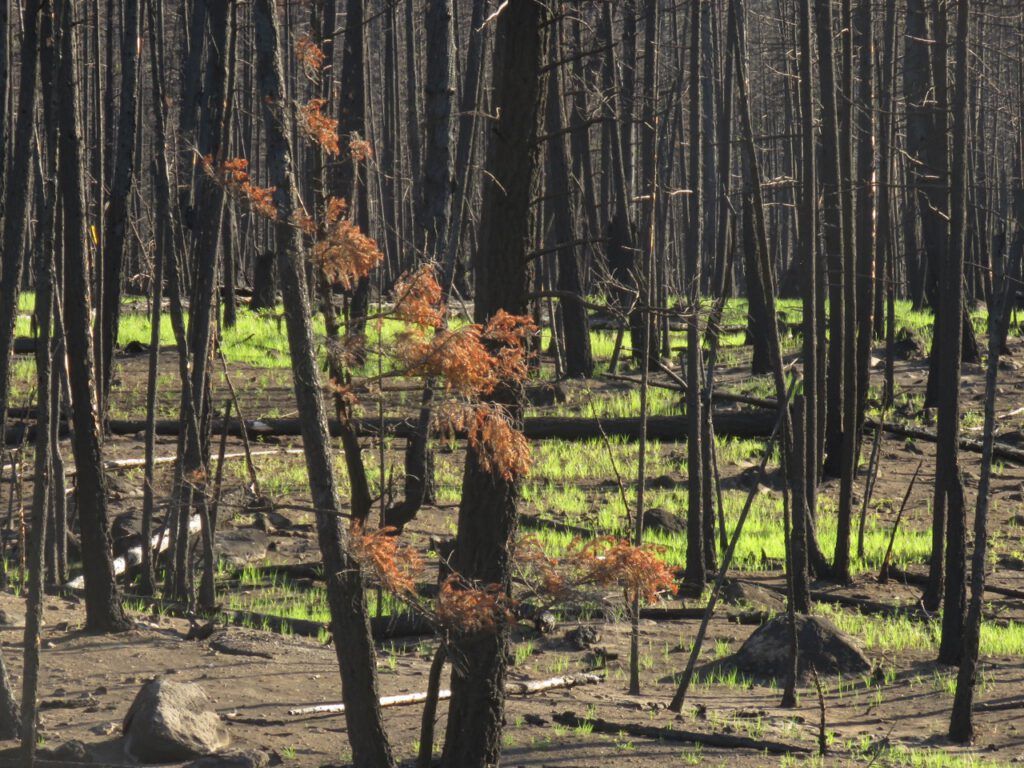 The green is startling against the black forest.  However, these areas were close to the road and received lots of water – also I believe fertilizer is often mixed with retardant.  Further back the country seems more uniformly brown. 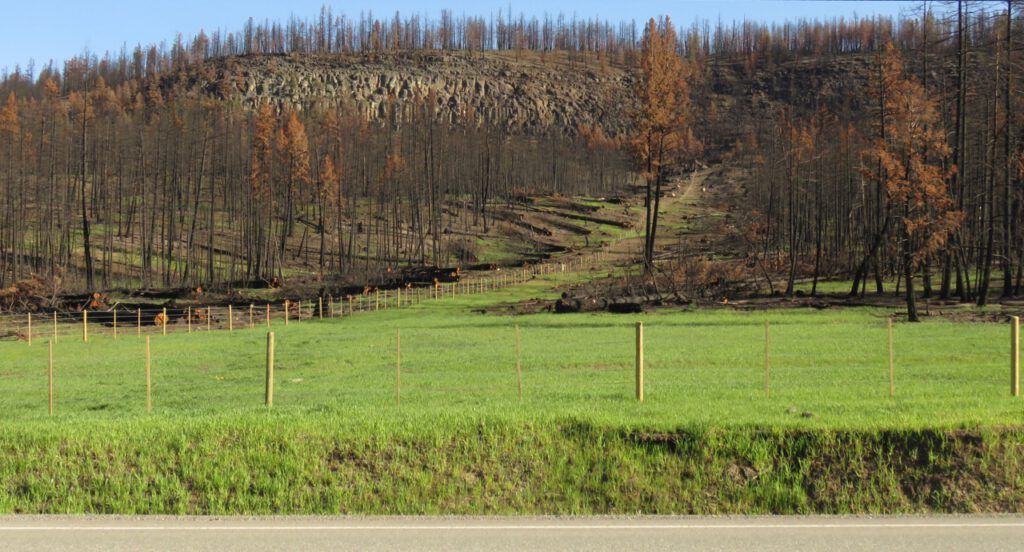 Towards Williams Lake sunny clumps of balsam-root daisies hugged the fence lines (where they can’t be over-grazed.) 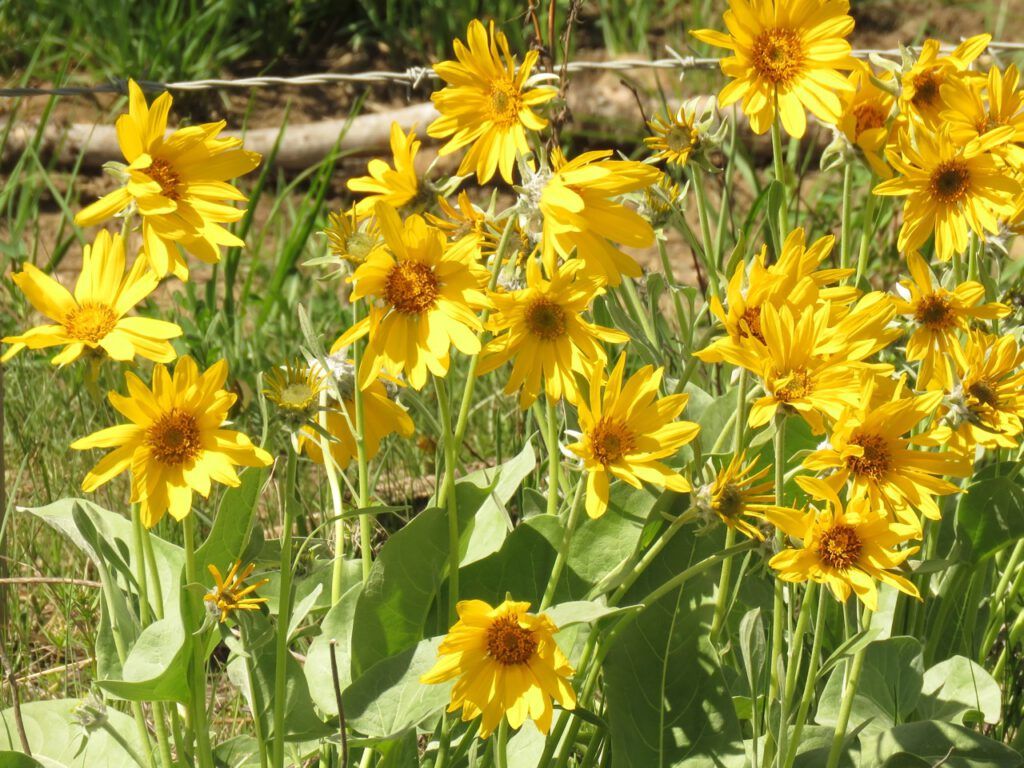 And Saskatoon bushes were in full snow regalia. 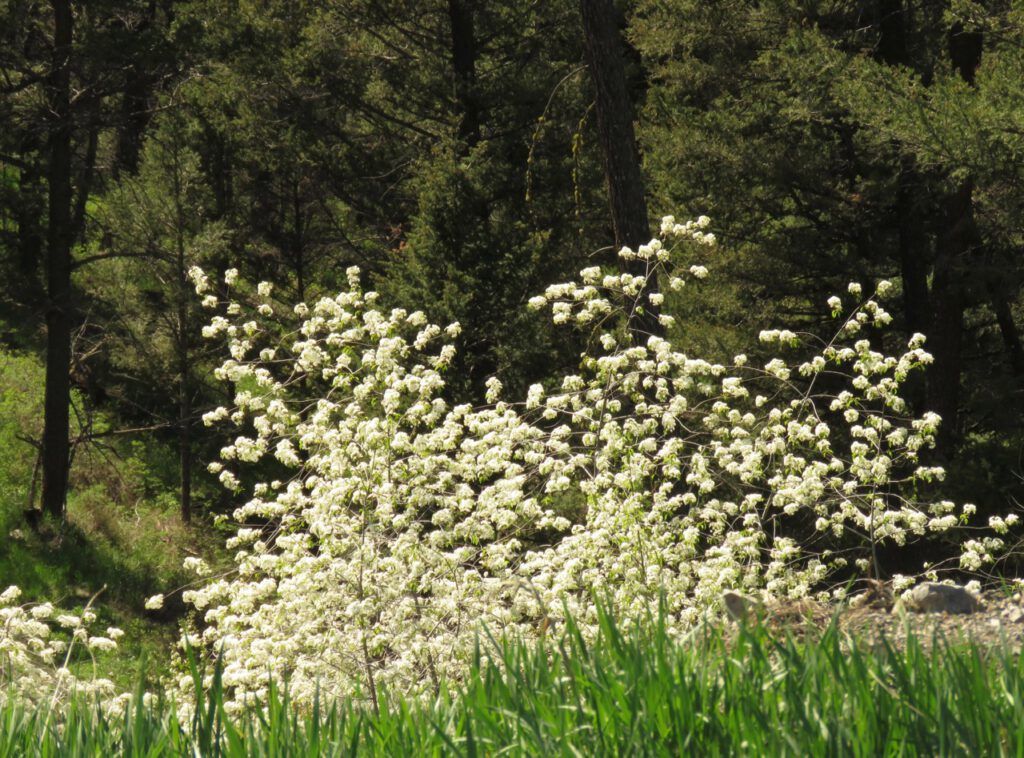 My main reason for going to town was to get new tires for my pickup.  They were pretty worn down.  I knew that, because the truck was old (2002), the tires were a difficult size so I had ordered them a couple of weeks before.  The store had confirmed by phone that they had arrived, but when I got there, they could no longer find them.  So I loaded up with gas, propane, dogwood, produce and other bits and pieces, and turned for home.

It’s always so good to get out of town.  The further west one goes the less traffic there is.  Tourists are starting to get out and about, though, and I got stuck behind these two.  There are very, very few places to overtake on Highway 20 – these guys ran just below the speed limit and made sure both by their position in the lane and their distance apart, that it was very difficult to get by them. 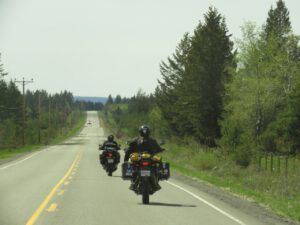 I kept stopping to take a picture, have a drink and so on, then I would catch them up again.  Fortunately I had just decided to pull off the road again when there was a horrible racket.  I was going slow and and stopped at once.  My right front tire had completely blown.

I managed to get all but two of the lug nuts off, but I figured I would have to ask for help.  Out west, everyone stops if you are pulled off the road, but this close to Williams Lake, people roared on by.  Eventually a kind First Nations man at least as old and half my weight stopped and helped me change the tire.  On went the spare – and as we let the jack down, the spare proved to be about 3/4 empty.  I had taken the truck to town about a month previous for its service.  They mentioned nothing about a leaking spare. Did they even check it?

My kind helper was going the opposite way to me; he recommended Doug’s Repair in Alexis Creek maybe 40 km ahead.  Nothing for it but to try and get there.  I put my hazard lights on and crept along.  I got a very dirty look from a cop but he didn’t stop me.  I got to the garage right around closing time.  And would you believe it, but the guy had exactly the right tires in his store.  On the Chilcotin a lot of people have older vehicles.  So off with the old and on with the new.  (I am most intrigued by the sign on the wall in the back….) 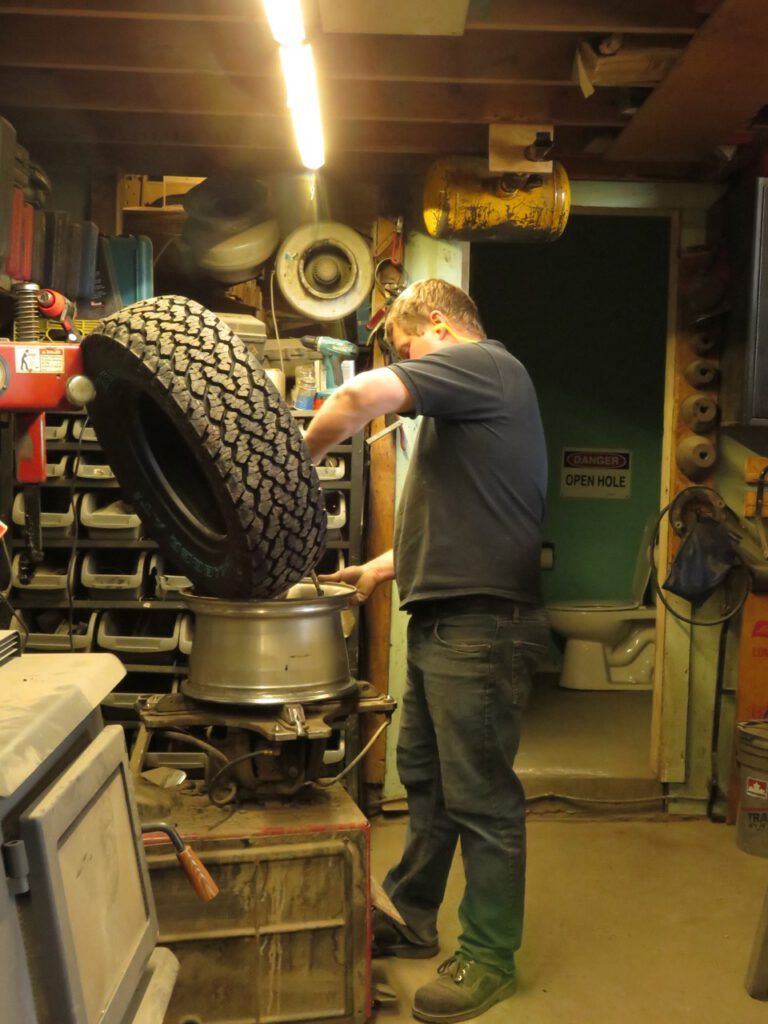 And here is my battered old truck, good as new.  The tires are by far the best thing about it.  This is a guy I will definitely go to again.  He is about an hour and a half from town – so if I want to get to a garage early, I can leave 1 and half hours’ later! 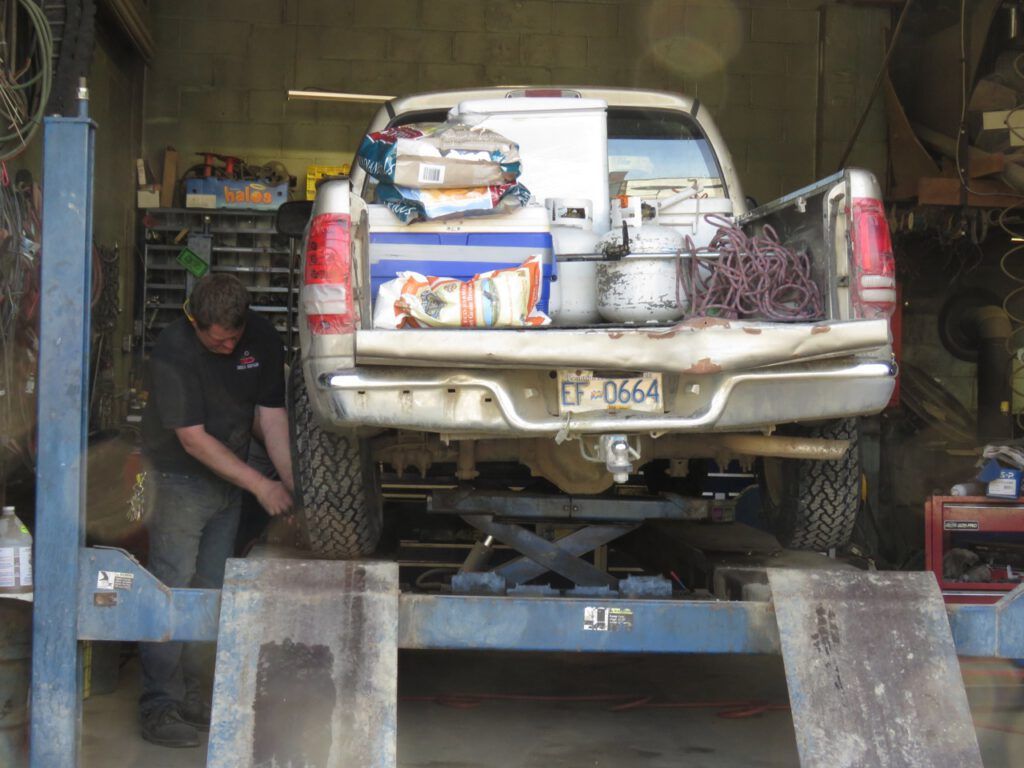 Meanwhile, the spring was rushing on apace. 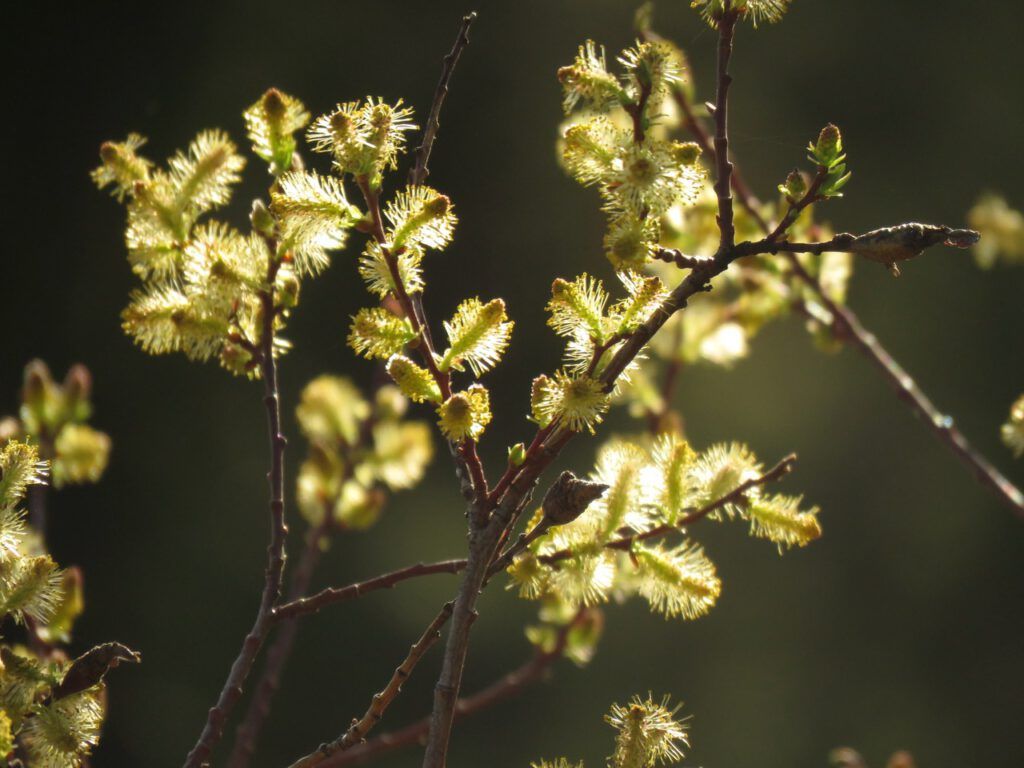 My property is a little bit behind downtown Kleena Kleene.  But now the aspen leaves were out. 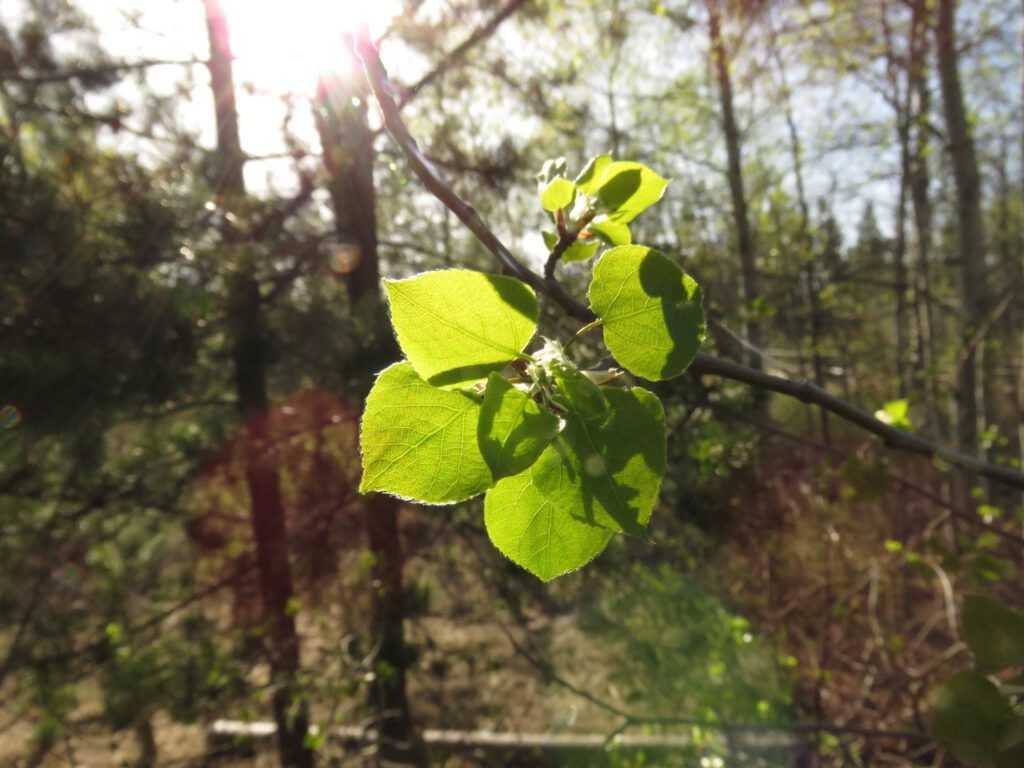 The morning sun lights the trees like candles in my back yard. 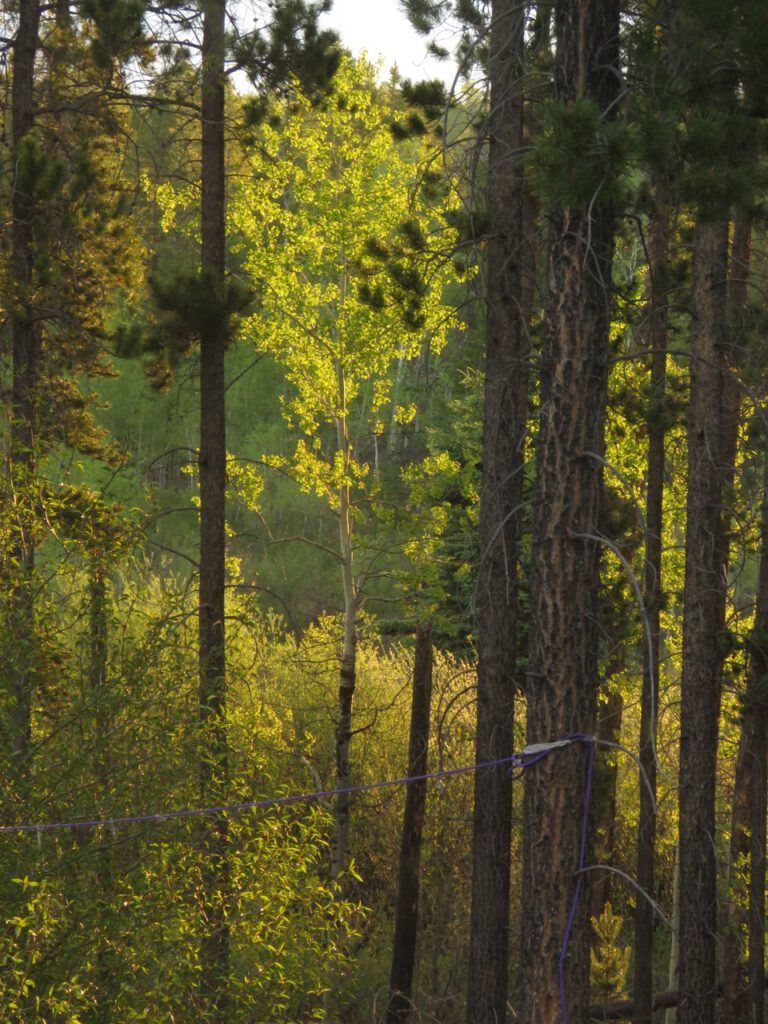 The cottonwood leaves are so gooey with balsam they look varnished. 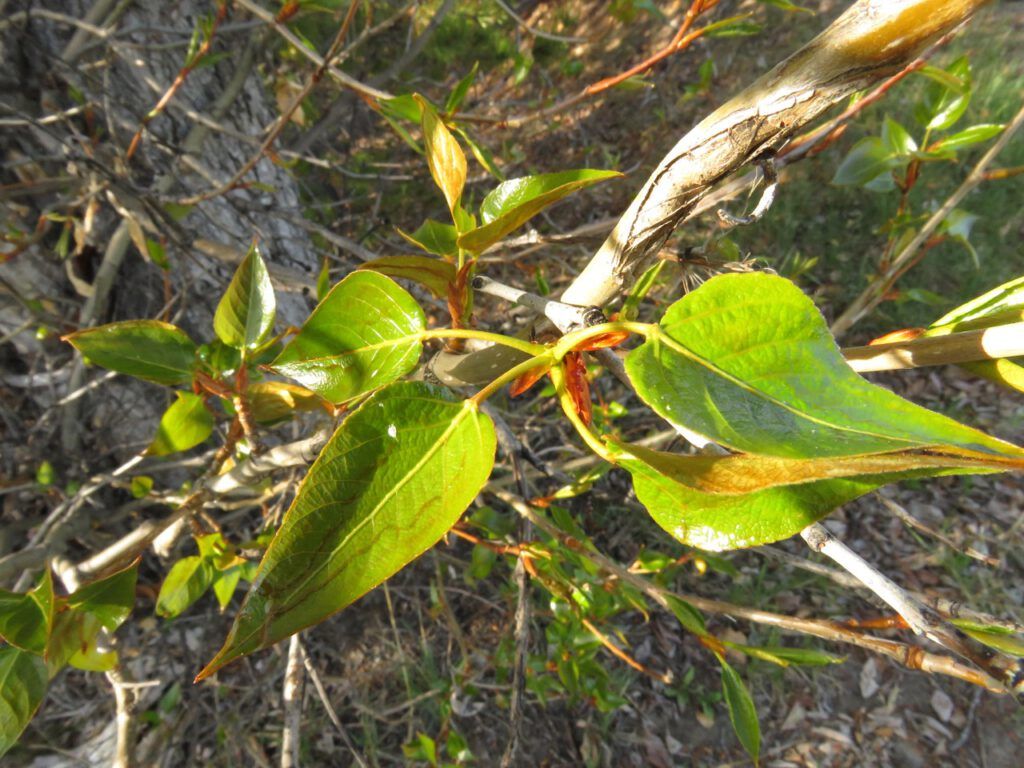 The early purple violets are out, (scentless unfortunately) 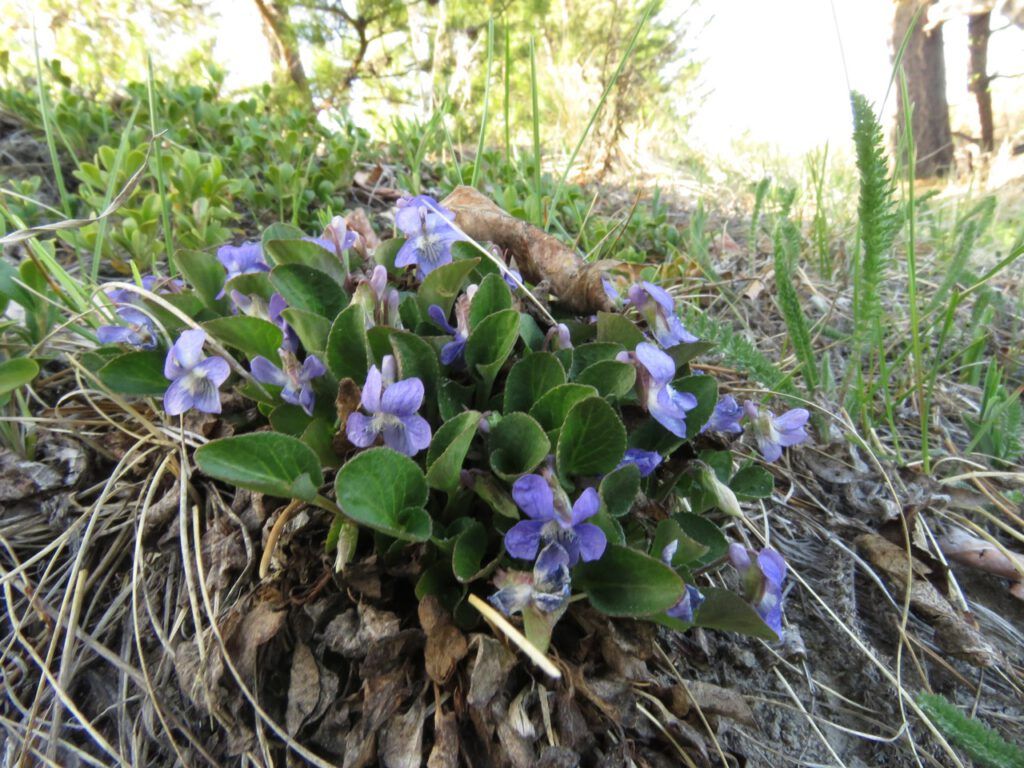 And so is the Jacob’s ladder, although it is making a poor showing this year. 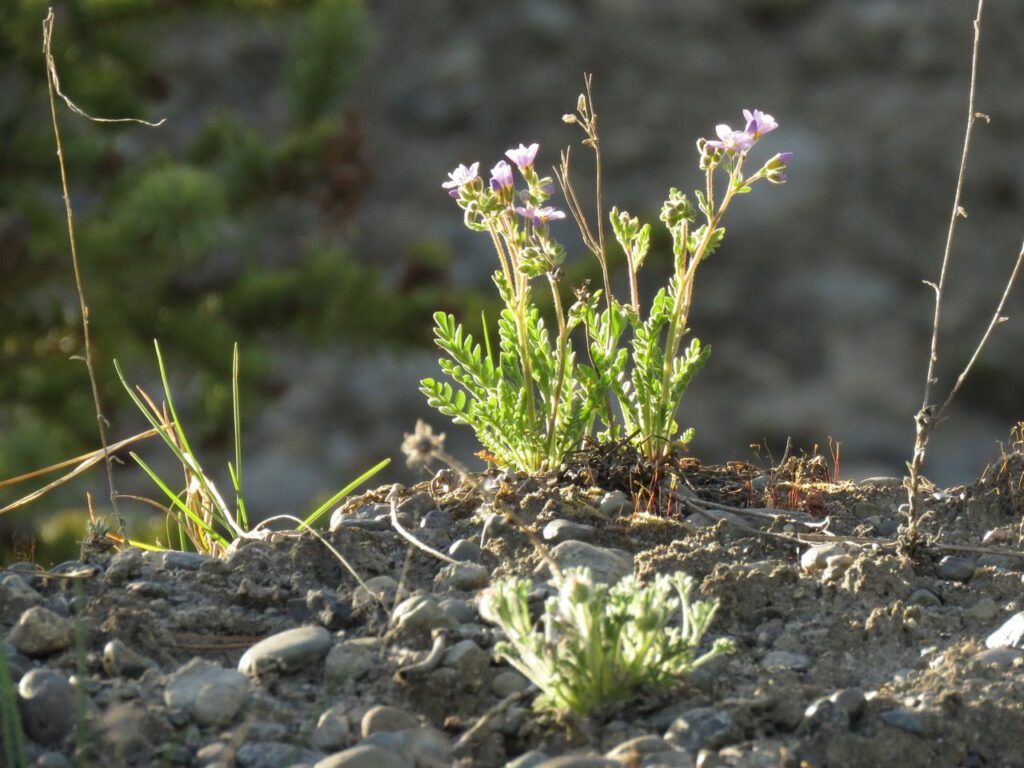 Downtown Kleena Kleene now has a remarkable array of colour on the ridges where the fire drove back and forth. 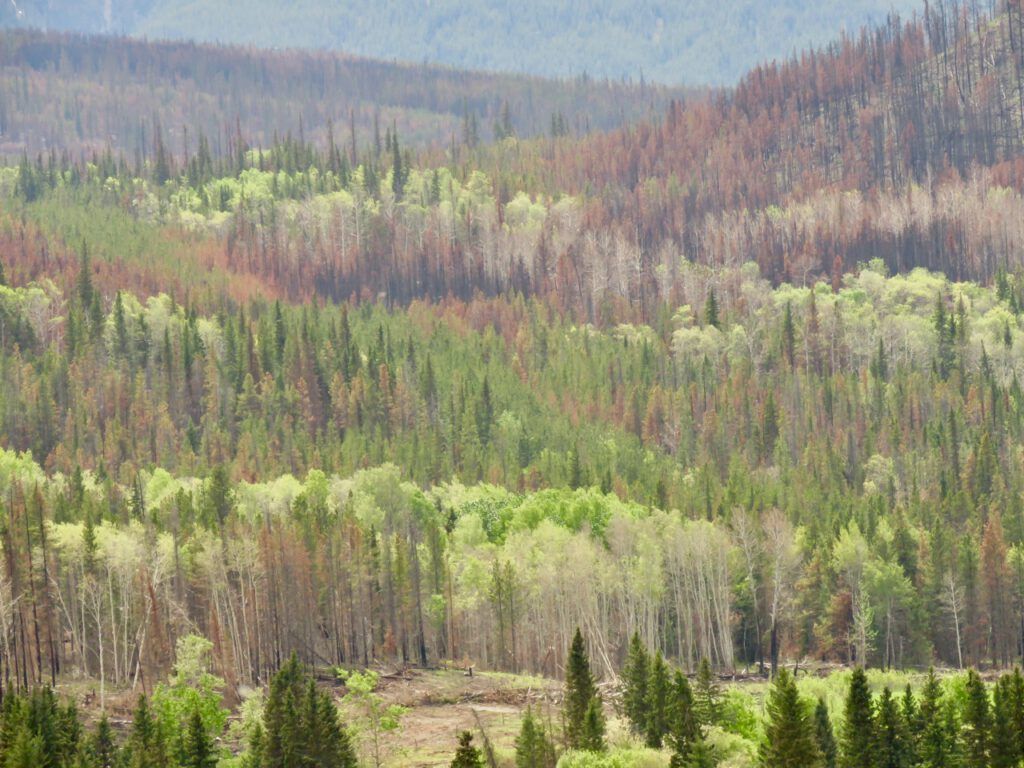 For a while, the annual bog hole on my road was impassable.  I managed to keep driving back and forth as I kept my van on one side and the pickup on the other. Now, however, it was starting to dry up. 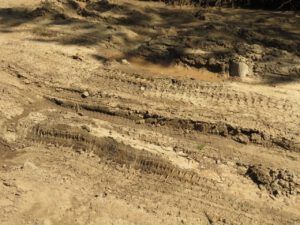 The rest of the road has been dust-bowl dry for a long time.  I love it when you can see the crease in the middle of the bear’s foot. 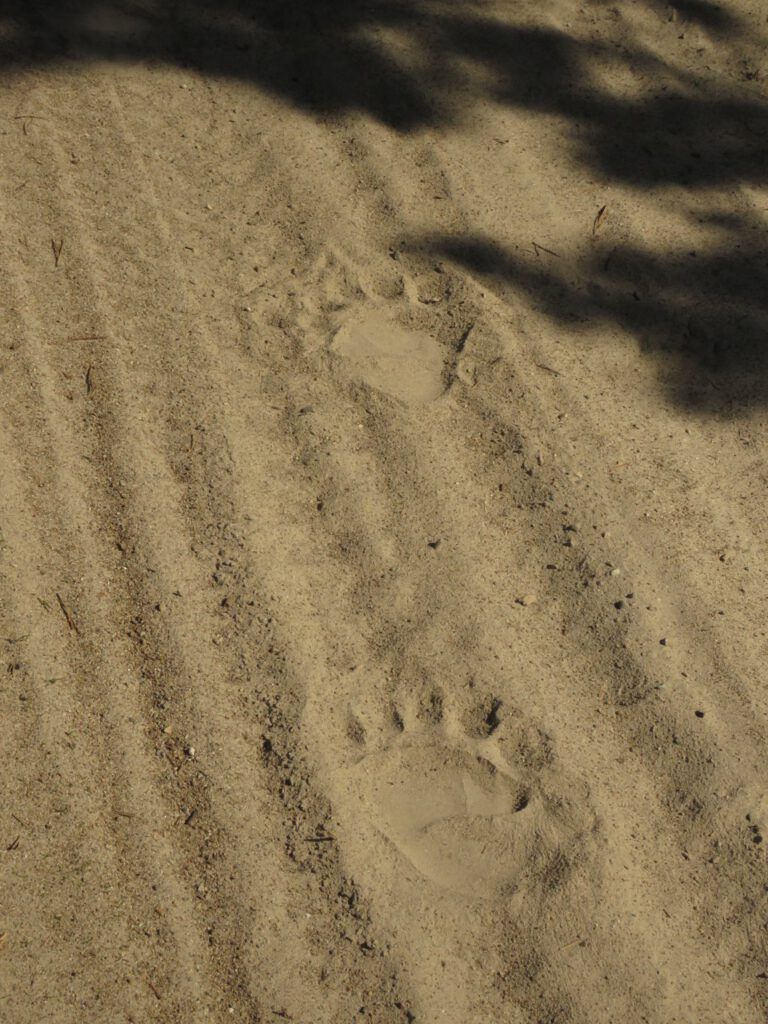 I’ve been driving to Tatla almost daily.  As well as teaching ESL to our new Canadians, we are also giving them driving lessons on an abandoned airstrip.  (Pam is flapping her arms because of the bugs!)

Kind friends from the Lower Mainland sent them the “Learn to Drive Smart” book in Arabic. (Arabic is not their first language, but they can read it.) 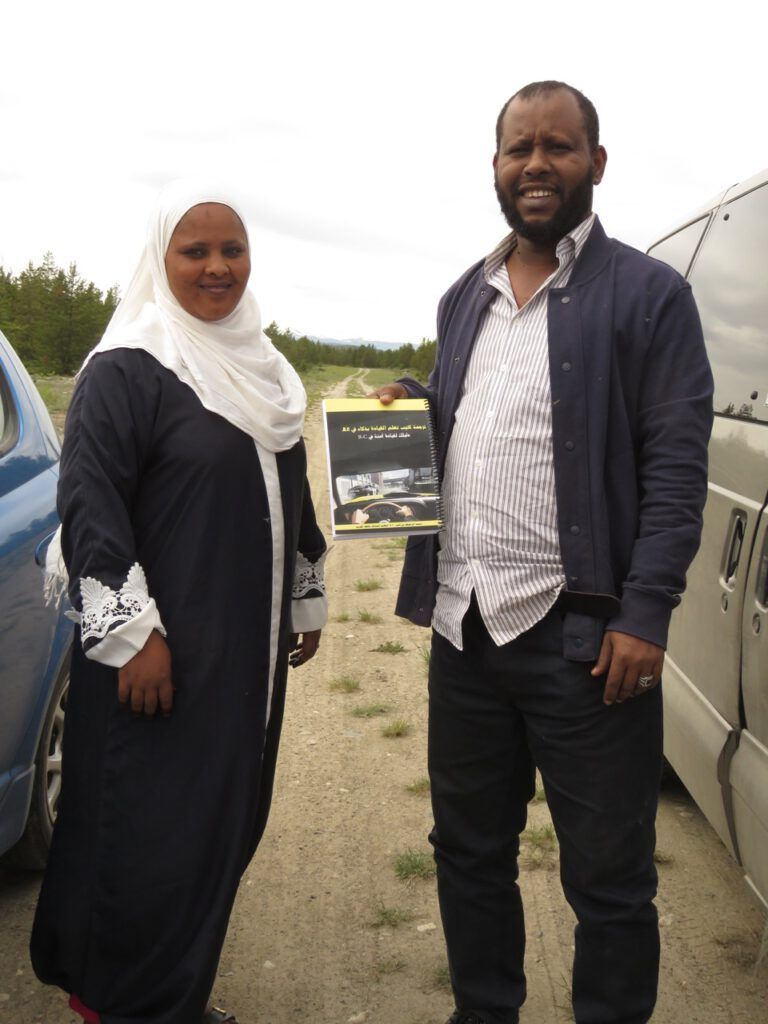 I have also been busy with the scenery for the play. (The dark bit on the right will be a rock face with a waterfall – it will be suitably lit for the performance.)

The tree on the right will be flipped around for a change of scene – and become a monkey throne.  Walt Disney makes me cringe.  He supposedly sets the story in India, as Kipling originally did, but calls his monkey king an orang outang.  Poor Kipling would turn in his grave. It is one of my pet peeves that American entertainment perpetuates ignorance. 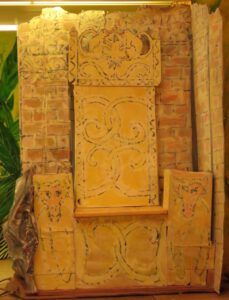 Here Sabrin and Lindsey are twisting paper to make lianas. 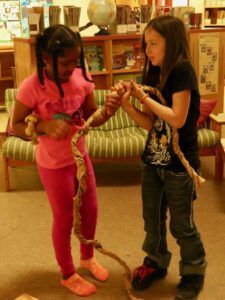 In a flash, it seemed, the willow seeds burst forth. 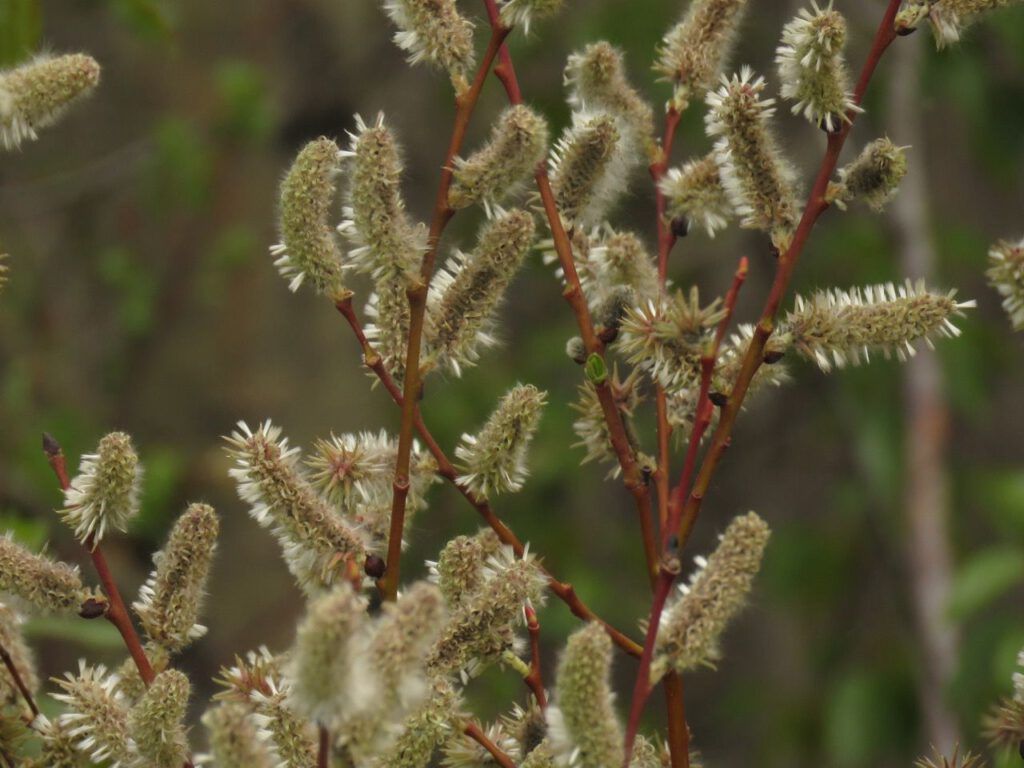 It flies through the air like snow and is clogging the pond. 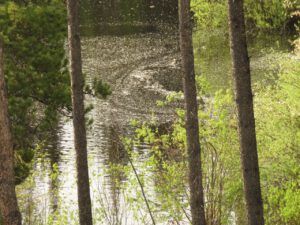 It is blown to the eastern shore. 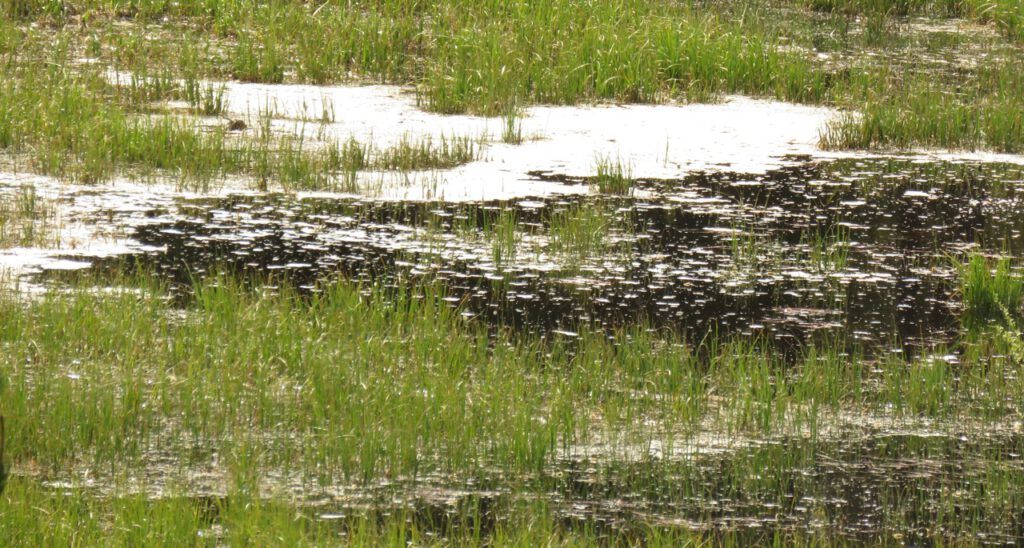 Last week I had 4 consecutive days at home.  I don’t remember the last time that happened. I made a monumental effort and put the garden in.  I re-dug it, sorted all the soaker hoses (not an easy task as every time I buy new ones they have incompatible fittings and I have to be very creative in the way they are joined), buried the hoses, planted the seeds, and put on row cover.  I have a limited water supply so must conserve water in every way I can.  The row covers help – but their main use is to stop the dogs digging beds in the newly turned earth, which they both love to do. 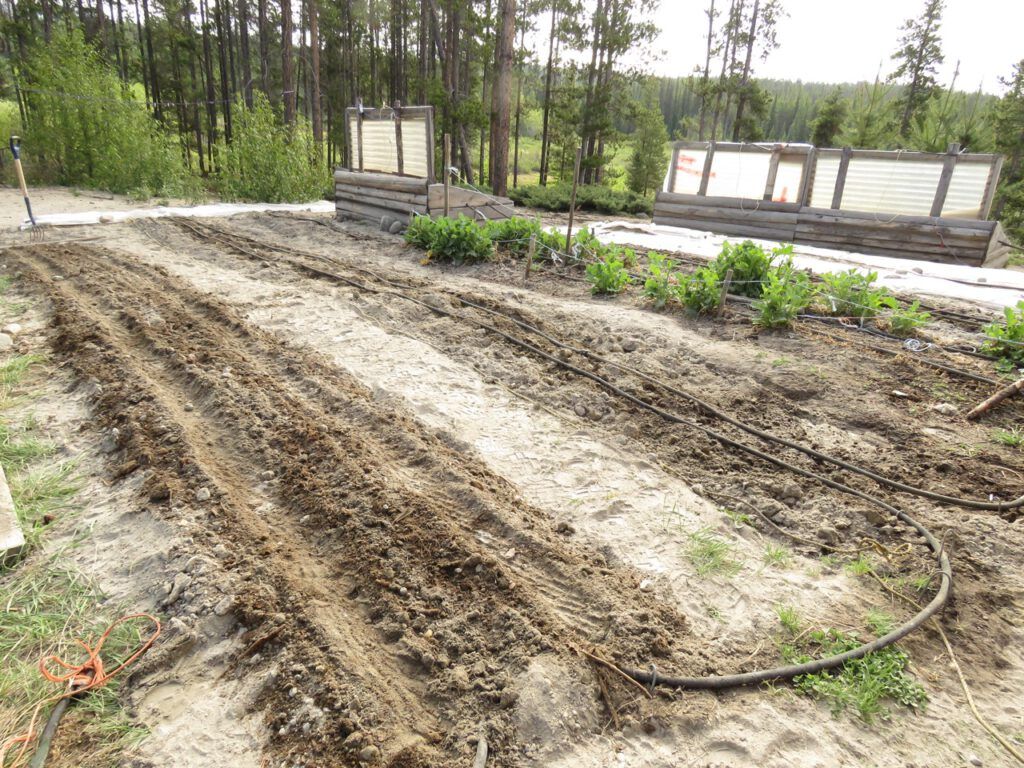 I had to get this post done today, as the next 10 days will be crazy.  Town tomorrow, Friday, to pick up a volunteer – the first of the year.  (Hussien can help but he is observing Ramadan and not supposed to eat or drink – not even water – during the day so I can’t expect him to do heavy work in the heat.) Saturday is the Tatla annual artisan fair.  Monday is ESL, driving lesson, then working late at the school with the play.  Tuesday play, Wednesday dress rehearsal, Thursday the first performance, given to visiting schools, Friday the big gala performance.  There is a Saturday matinee and the cleanup but I am opting out as early Saturday we head down to the Precipice for the cattle drive party. Stay overnight, back Sunday, Monday ESL and driving lesson…. By Tuesday June 5th my volunteer and I should be able to finally get on with some work!

6 thoughts on “The Greening of Ginty Creek”