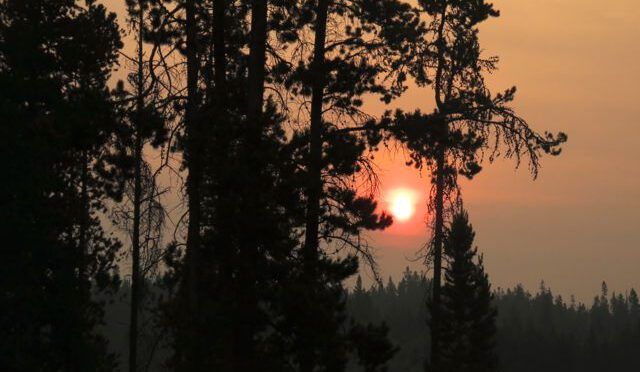 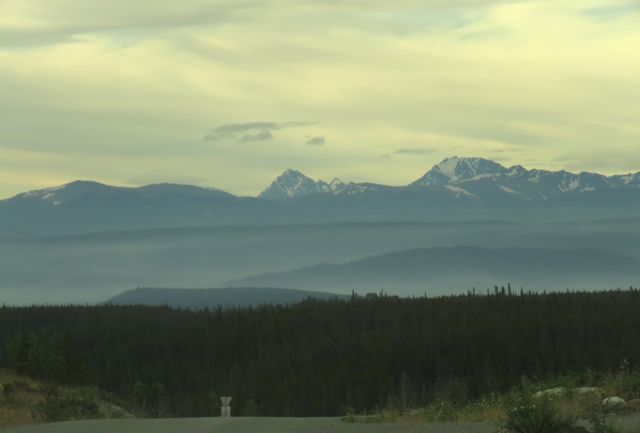 The fire is like a dragon.  It goes to sleep at night and is often lazy about getting up in the morning.  But when the wind starts it rears its head and soon breathes fire and smoke.  Back-burning contributes to this, too.   This means either ground crews or heli crews start fires that will hopefully form a burned firebreak around the perimetre of the existing fire.  This can be done only when the winds are exactly right.  Which they are not in this next picture.  A strong, gusty  SW breeze is stirring up the fire dragon again. 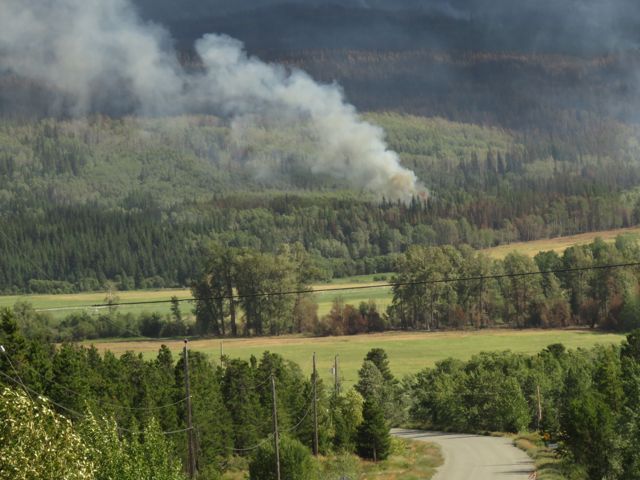 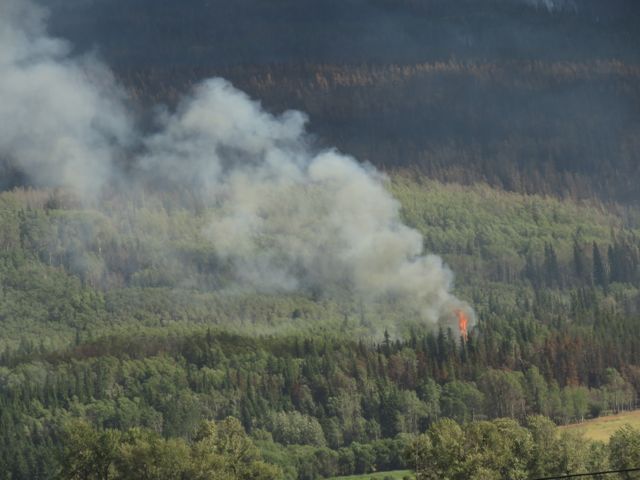 It was hard to settle down once I was home.  Half the day is consumed with checking websites, contacting similarly affected friends, watching the wind, listening to the helicopters and the heavy-duty trucks on the highway moving large digging machinery of various kinds.  The loggers might not be hauling trees, but many have found work driving skidders and bulldozers.

The Precipice fire, which burns between me and Bella Coola, is not so much in my face but the nearest residents (all of whom have defied the evacuation order) are only 3 km away.  I have been there often during the spring Precipice Cattle drives. 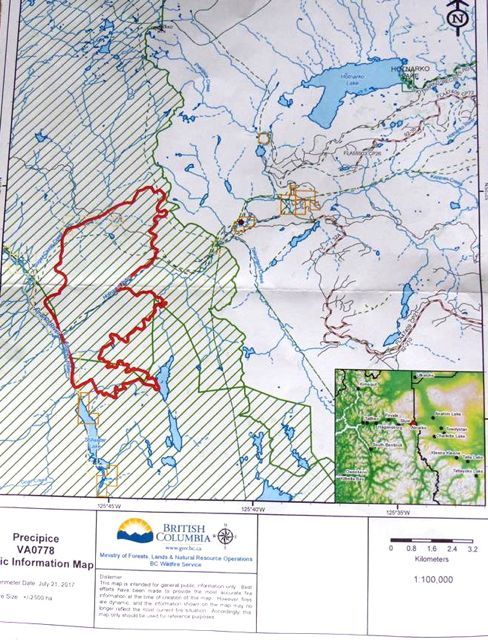 The fire remains only 10% controlled but it has not spread a great deal for a while.  35 firefighters, 8 helicopters, and a couple of sprinkler crews are working on it.  I took a couple of friends to the Anahim  Lake airport the other day, and we were royally entertained by the helicopters landing for fuel and taking off with their buckets.  A couple of huge double-rotor choppers were working. 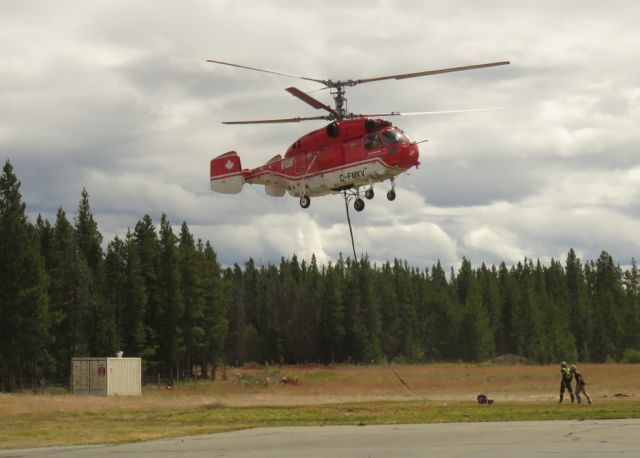 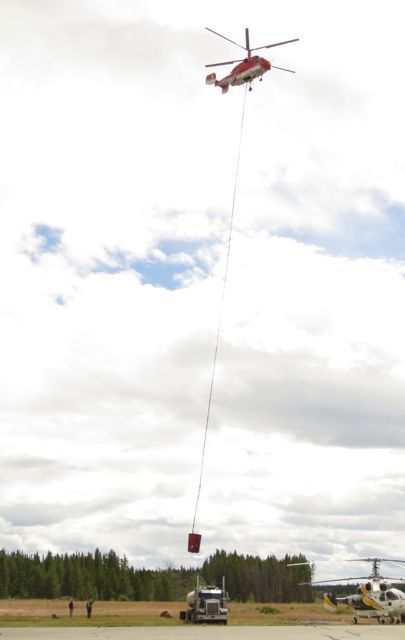 Life still goes on down in the Precipice.  One of the couples has a market garden and this is strawberry season.  Instead of shipping them out they are processing them into their freezer and hoping to sell them that way. Fortunately a firefighter I knew was driving out of there and they were able to send out 40 lbs so I could process them myself. 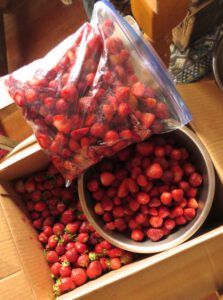 The Precipice people have solar and wind power so don’t have a problem keeping the freezer going  – unlike a resident of Alexis Creek an hour west of Williams Lake (where I had to drive around the start of that fire) who found her whole freezer rotten.  It was full of fish – salmon and halibut.  People there were on hydro power and that has been intermittent all along.

Highway 97 south and north of Williams Lake has been opened, although some areas are still restricted.  (However, another fire closed Hwy 97 south again shortly afterwards.)  This meant that residents of Williams Lake could start going home.  This was not an easy business for the city – first they had to make sure that the hospital and power system could function.  Of the 3 power lines into Williams Lake, only 1 was working.  Without power there would be no water and the town would be a disaster.  Stores were allowed home first so that they could stock up with produce.

Then Highway 20 from Williams Lake to Bella Coola was opened and at the same time Kleena Kleene was downgraded from Evacuation Order to Evacuation alert.  (I think all 25 residents were already home anyway!)  And the very next day I saw the first tourist!  Needless to say all businesses have suffered terribly through this ordeal.

I can only guess at the actual shape of the fire.  I have corrected the northeast edge to show it didn’t cross the highway but the southwest corner has been very active and I’m not sure where that is now; also I suspect that the two fires have joined. 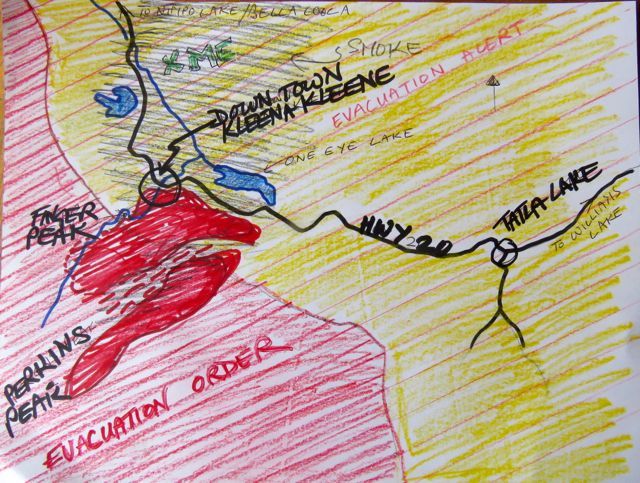 The next picture shows how close the fire got to the highway. There must have been a major flurry of activity when that happened. (There are new fireguards on either side of the road as well.) 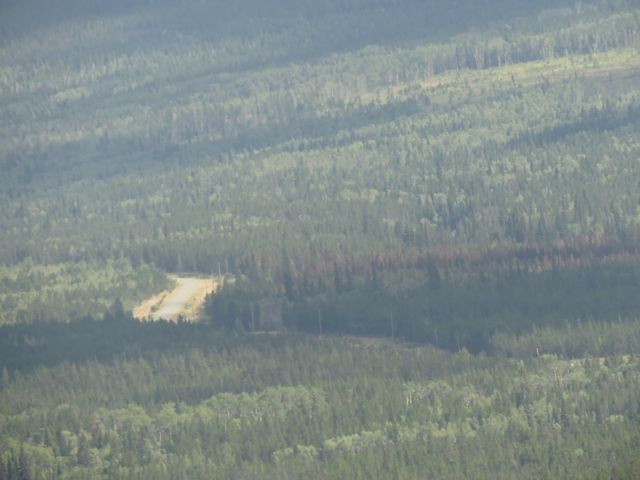 The various fire websites were days out of date.  I could hear helicopters constantly and most days I would hike to high points to try and check out what was going on but it was really difficult to understand what was happening. 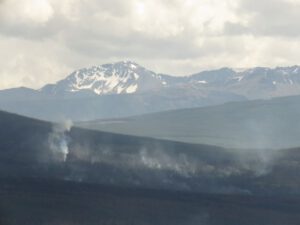 The last time I went to Williams Lake (which was the day the fires started) I was told by my mechanic that my front brakes needed new shoes and callipers and I should get them done “next time I was in town.”  Well of course that “next time” hasn’t happened – and I have been up and down the famed Bella Coola Hill six times!  So I phoned a mechanic in Bella Coola to see if he was able to get parts.  Gas, freight and food trucks have been let through most of the time.  (No mail by road yet, though.)  He said he should have them in a few days.  So I arranged a time for the work and left the day before yesterday.  Already a helicopter was bucketing like mad at the east end of the fire, to what end I have no idea.

I stopped at the top of the Bella Coola Hill, defied the Park closure sign, 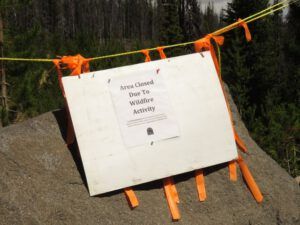 and took a short walk along the creek to see the wild flowers.  I can’t remember when this fire was – at least 10 years ago I’m sure. 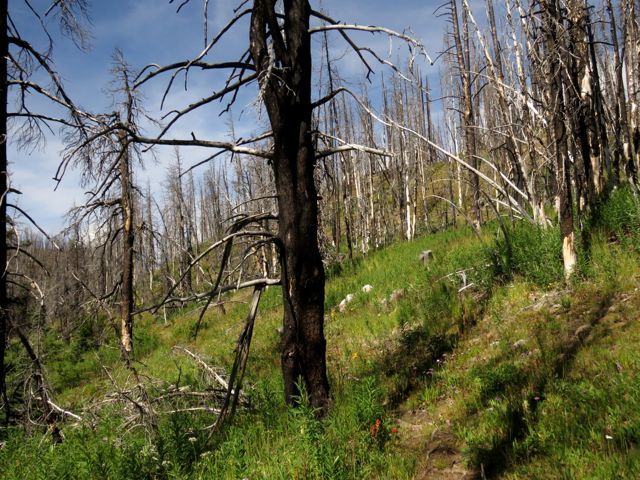 There is plenty of growth on the ground – but no new trees yet, except in the damper places along the bottom.  The flowers were already scruffy and parched, but they were a reminder that nature will heal. 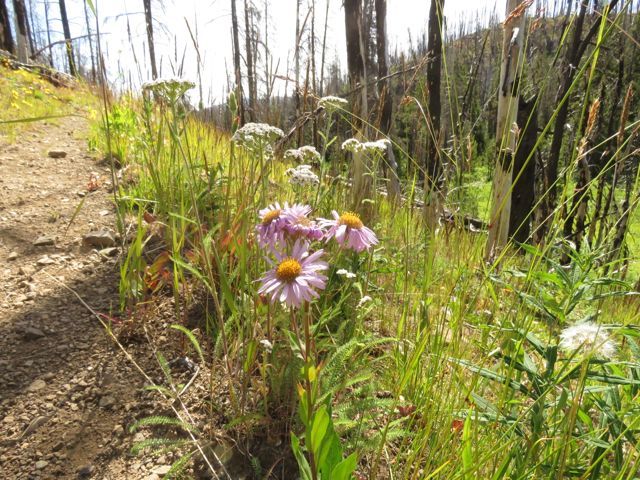 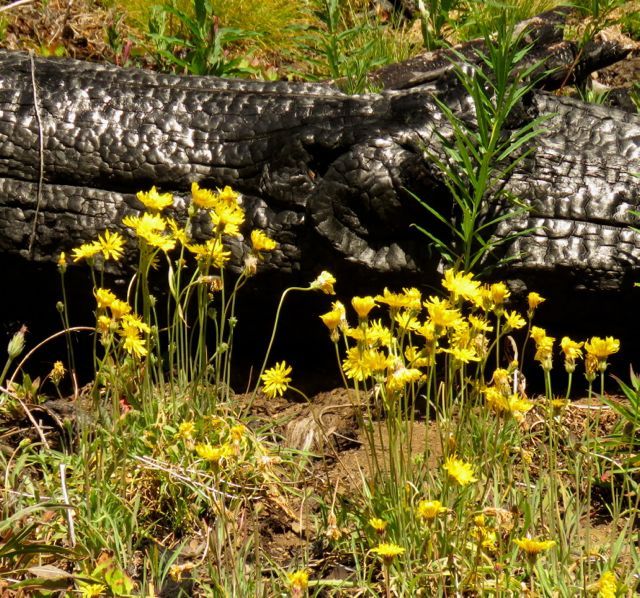 Orange agoseris (not to be confused with the dreaded orange hawkweed!) 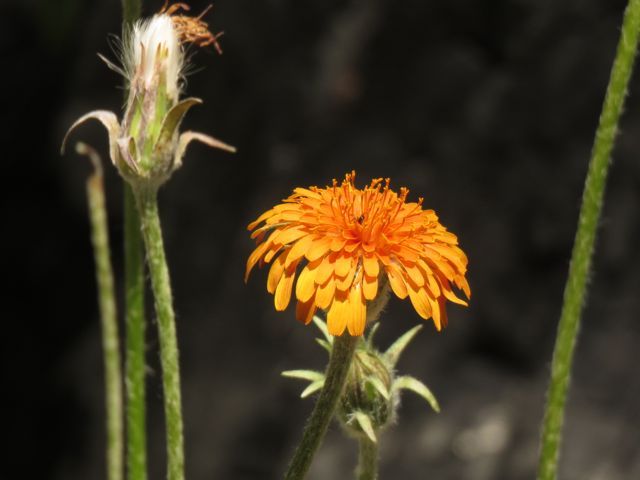 And a few clumps of the common red paintbrush. 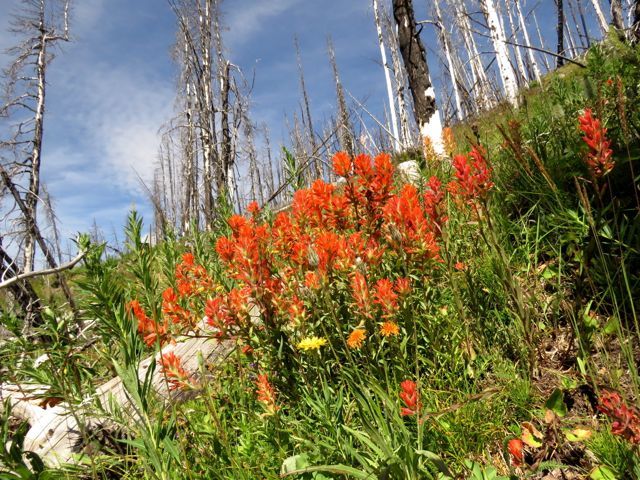 Here is a very peculiar thistle.  I have seen it on and off in different places – but never the same place twice.  I have never noticed it on this trail before. 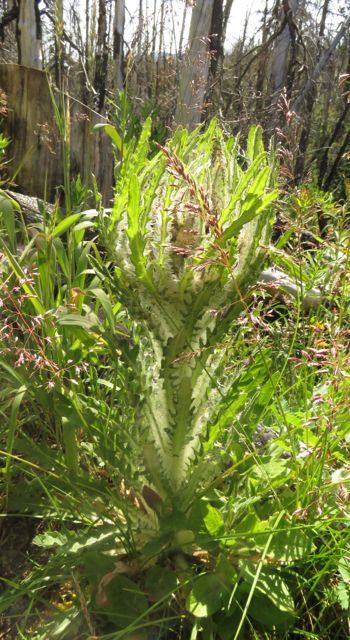 The blossoms are all buried among the crowning leaves. 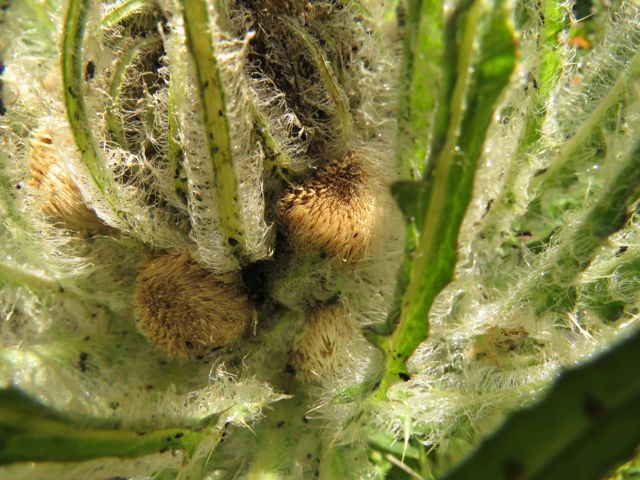 Yesterday morning the Bella Coola Valley had a haze of smoke.  They were back-burning in the Precipice fire. 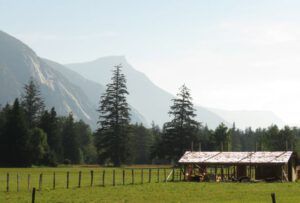 While my van was getting fixed, I picked my winter’s supply of blueberries from a nearby U-pick farm. 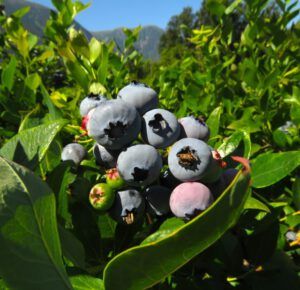 That afternoon I began the three-hour drive home.

I was somewhat disconcerted to see a flashing highway sign at the bottom of the Bella Coola Hill.  Had the back-burn got out of control and the highway been closed?  But no.  It was to tell everyone that the highway 20 was open. 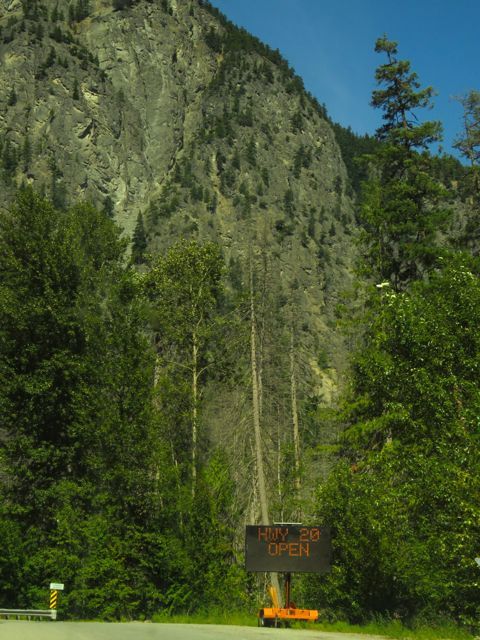 I actually met another tourist coming down the Hill!

When I got to the top, though, I could see a slab of smoke lying across the Chilcotin. 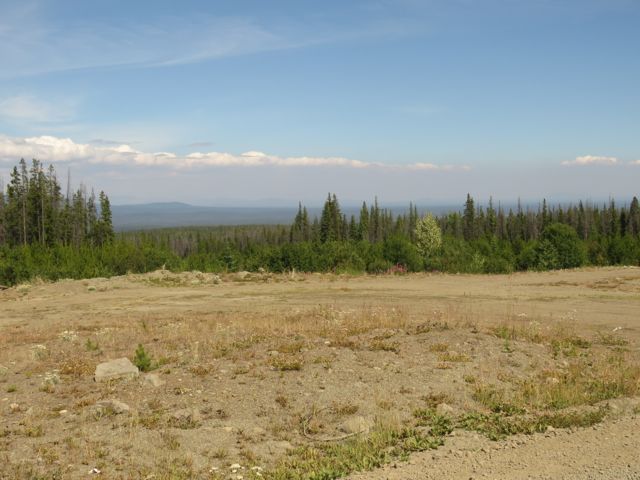 I wondered if it was from the Precipice fire, but when I drove by that area was clear, and with mounting dread I realized it must be from the Kleena Kleena Fire.  I hoped it was not something new, but back-burning.  The forecast for the next week is for very light winds from the South East – perfect for firefighting, but not so perfect for me.  Check out the map above to see the path of the smoke.  Here is my view. 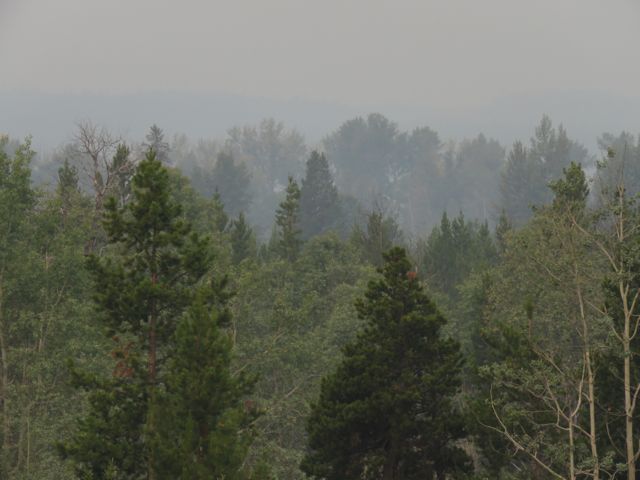 I daren’t leave home, though.  Temperatures are supposed to be in the 30s C (that is 80 – 90 degrees F).  Heat is very dangerous at the best of times in the fire season and with a large fire only 5 km away I need to know what’s happening.  Loading all my evacuation stuff is such a pain I don’t want to do it unless I have to (although it is all ready, still, in boxes on the floor.)  And if the garden is not watered, it will die.

Here is this morning’s sunrise. 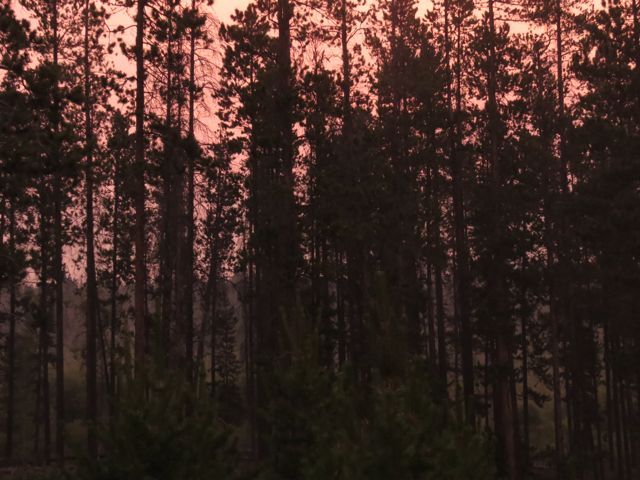 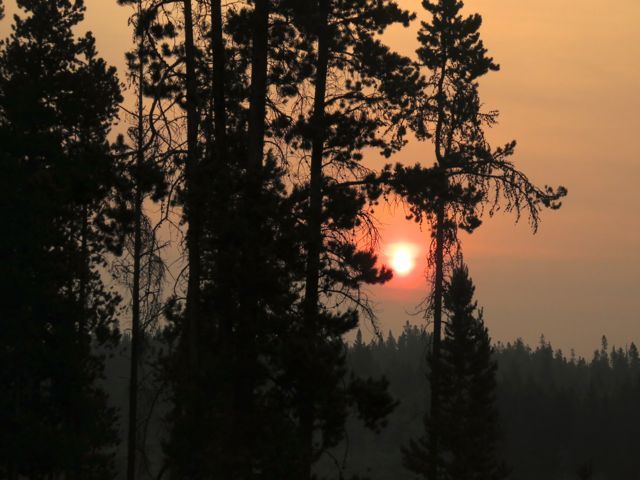 At least this time, we have a large number of people in place.  According to the Fire of Note website for the Kleena Kleena Complex Fire, we now have 72 firefighters, 8 helicopters, and 10 heavy equipment on standby, the first time ever that they have listed our resources.  (I say “standby” as apart from an early distant helicopter, all is quiet at the moment.  It is too smoky for anyone to see anything.)  The site also says that back-burning will continue while the weather holds.  This next week will be something of an ordeal.