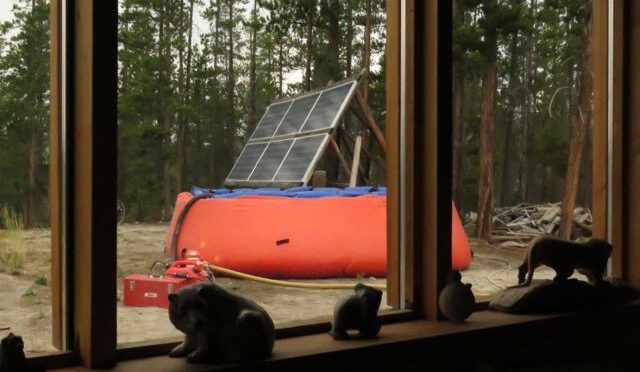 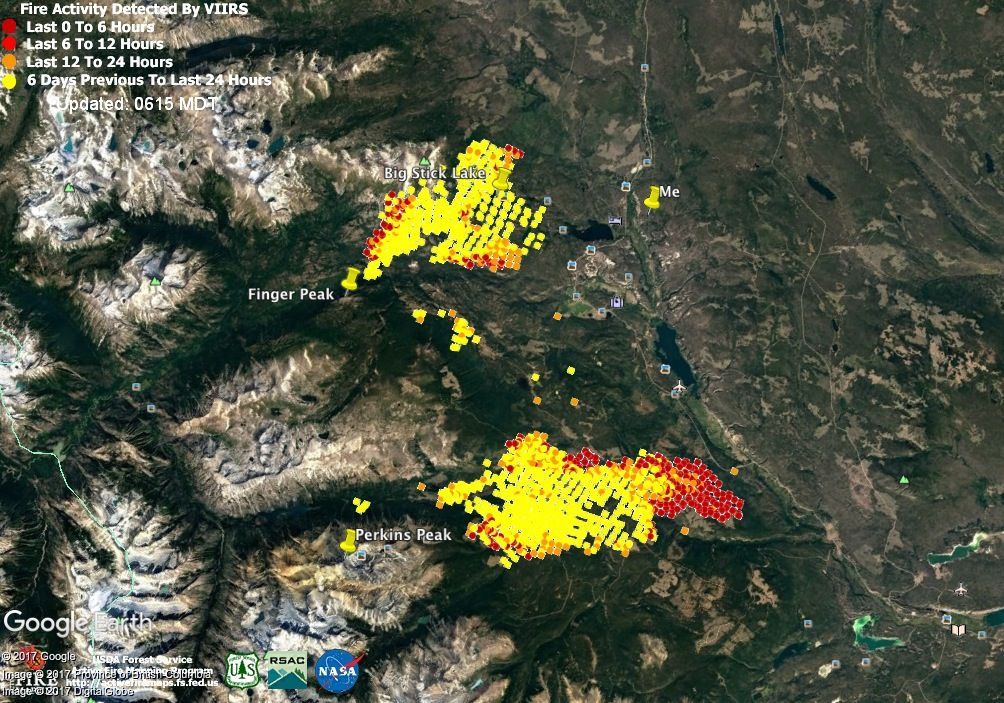 Here is the aftermath of the last post about the Kleena Kleena Fire explosion. On the morning after our last windy day, Google Earth showed that the south fire in particular had been very active at night.  The following photos illustrate that.  One Eye Lake is the long body of water half way between that end of the fire and “Me.” A friend lives at the north end of the lake and he hiked up a small hill near his place and took this photo looking towards Tatla Lake (the tiny library book in the bottom right corner of the GE pic) at about 3.30 in the afternoon of the 18th.  The fire clouds are huge – this is only half the fire.  Highway 20 is just visible in the middle distance of the picture. 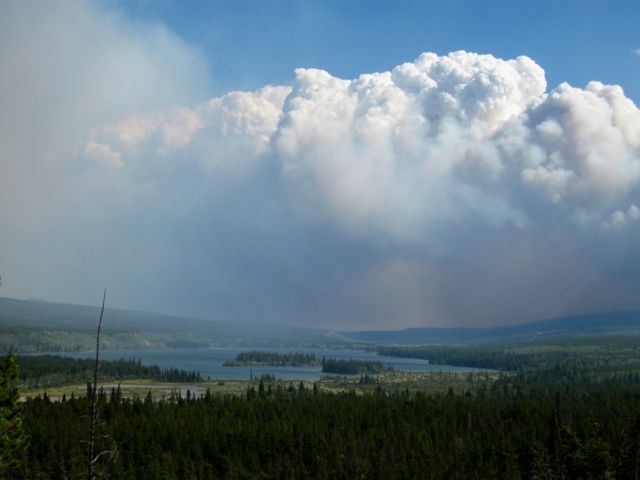 Later that even as the wind eased off a little and the smoke began to lie down, I could see the pyrocumuli from my bay window.  At this point they are somewhat reduced but still very powerful despite the chill in the air and the lateness of the day.  This was a forest fire about as bad as it gets. 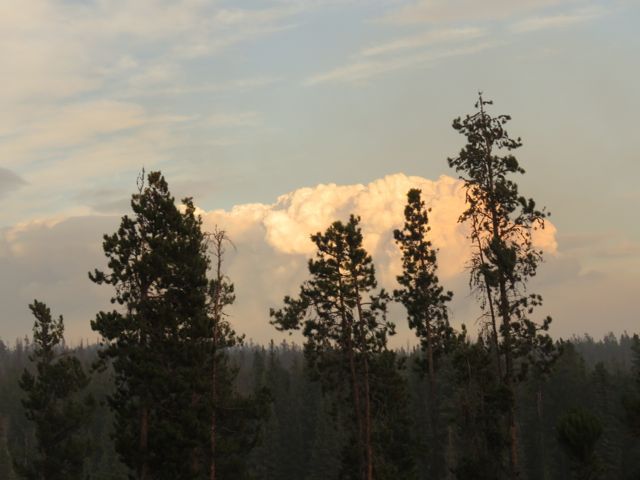 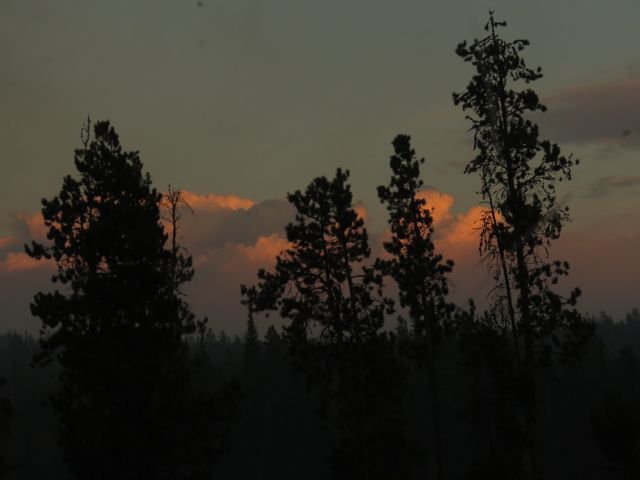 It was 10.00PM on the 18th when I was woken by the phone.  It was an automatic call from the Tatla Lake Search and Rescue saying Tatla and West branch were under Evacuation Order.  Residents were to proceed at once to Prince George.  Reason told me that the fire was blowing away from me, but it was not an easy night. The gusts took a while to die down, but the following morning was finally calm.  I even saw a few stars at first – something I have rarely seen at all these last 6 weeks.  I could just make out the mountains. 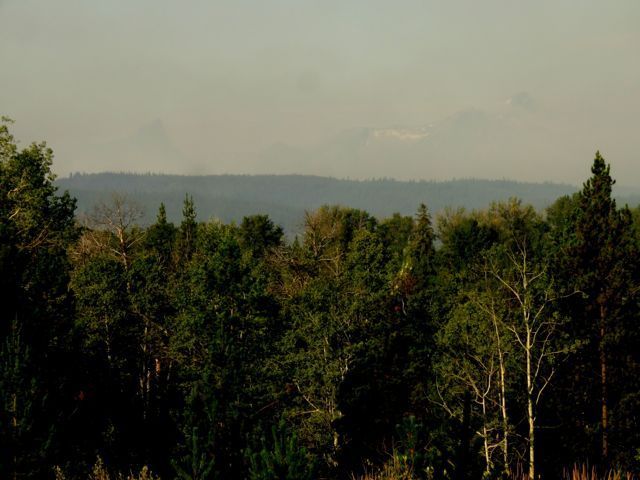 But the small air movement was coming to me directly from the fire so naturally the smoke soon built up again. 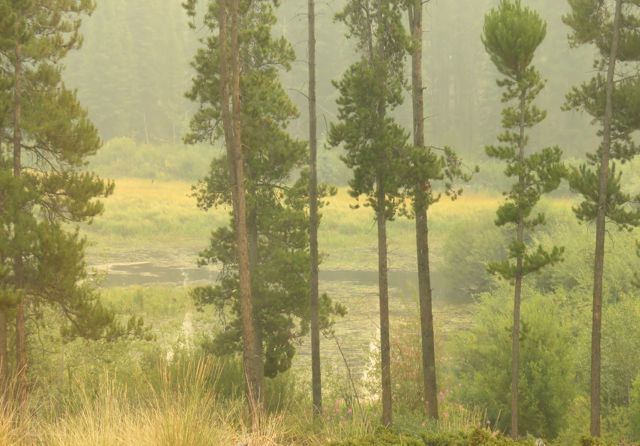 The interesting thing, as far as I could make out, was that the Kleena Kleene fire was the only one to have received the full fury of the wind storm.  Here is Modis at noon of the 18th.  (Our fire is second left: Williams Lake is at the right of the frame.) 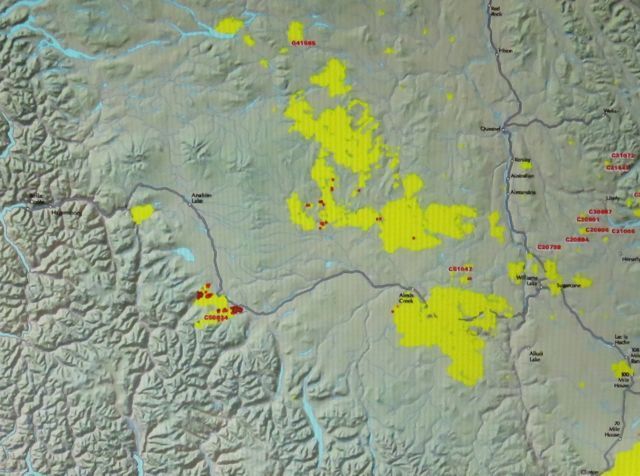 I now have a new friend: Ken from the Wildfire Service.  He came in at the height of the windstorm, trying to make me leave but I wasn’t going to give up at this stage as who knew when I would be allowed back?  I remember in 2004, when people were forced out of Charlotte Lake during the Lonesome Lake fire, after a couple of days they were all allowed back for 2 – 3 hours in the morning so they could tend sprinkler pumps and gardens etc.  They were under explicit instructions that they had to return before 11.00AM.  Nothing like this has happened here.  But although I was very anxious, and had things loaded up so I could just turn the key on my van and leave, Windfinder assured me that it was going to get calmer so I kept hanging in there.

On the 19th, the smoke built up again,  and this time ash began to fall.  I was surprised not to see much of it before this.   How often have I taken snowflake pictures on these solar panels! 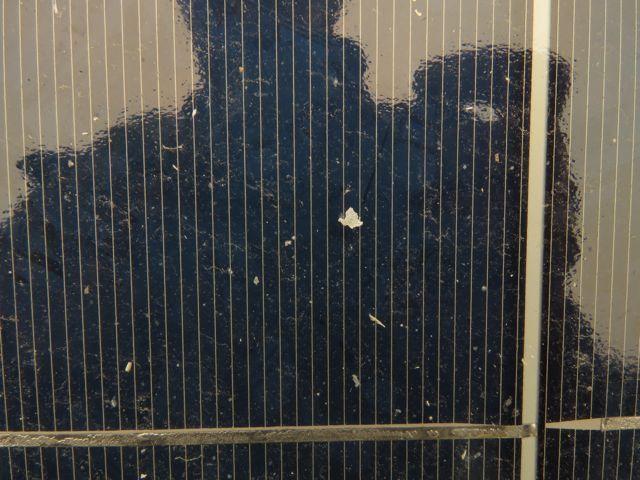 This poor spider was not happy to have her web full of flakes. 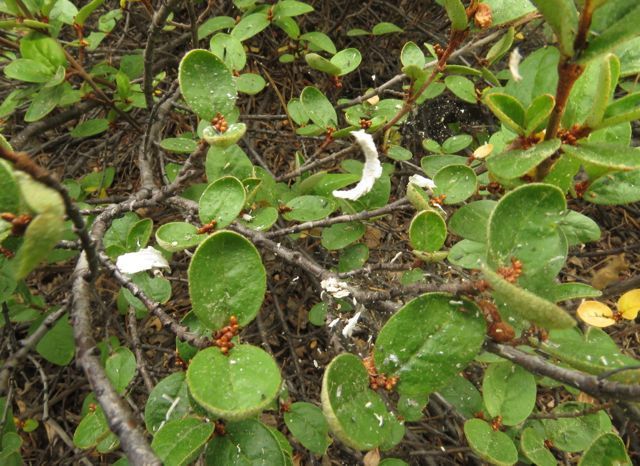 My new friend came back with Gord who was organizing the structure protection units.  He said he would bring a crew in that afternoon.  Sure enough, Badger barked at around 4.00PM (we’ve had a lot of visitors these last few days!) and in rolled a couple of vehicles, one of which was loaded with a bladder.  They had decided that my pond was too full of silt and vegetation to be a good source of water as it would keep blocking the pump.  My own private swimming pool was the best solution. 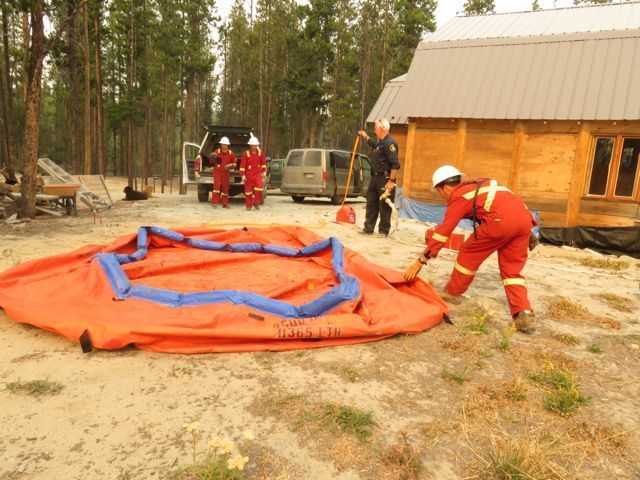 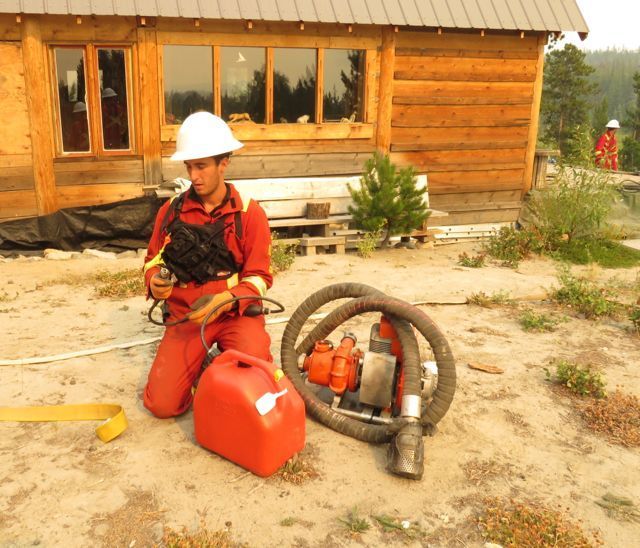 The guys in the orange suits were from the Comox fire department. 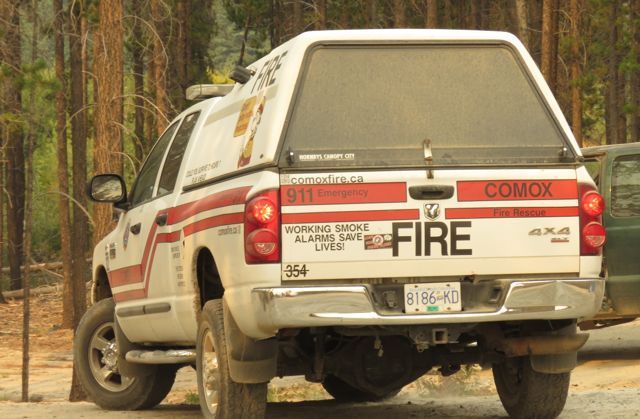 Then came a couple of tanker trucks.  The first was from Ferndale/Tabor fire district.  It had driven to a somewhat awkward space beside the McClinchy river and sucked up a load of water. 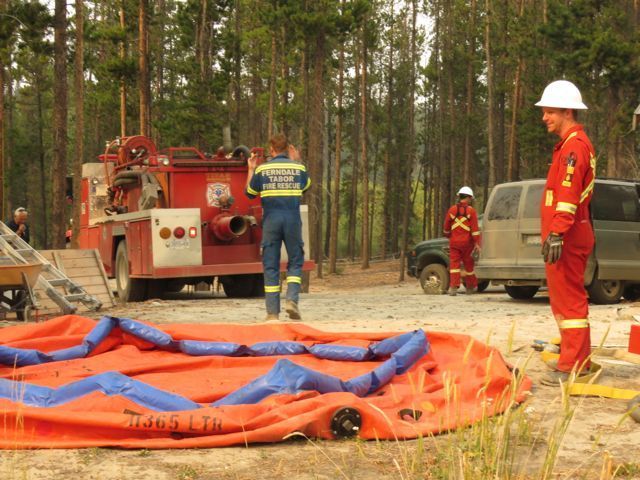 I have had to be careful with water all my life and to see it so casually pouring out – and spilling on the ground – was amazing. 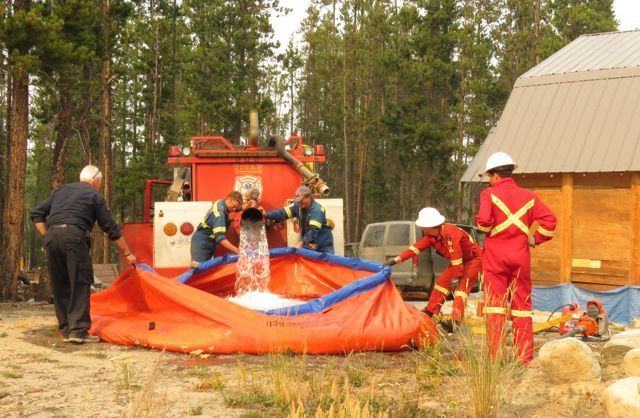 The first tanker did not have enough water, so a second was brought (obviously they could not use big tankers on these narrow, twisted bush roads.)  The second one was from Logan Lake and the driver was very proud of his shiny vehicle. 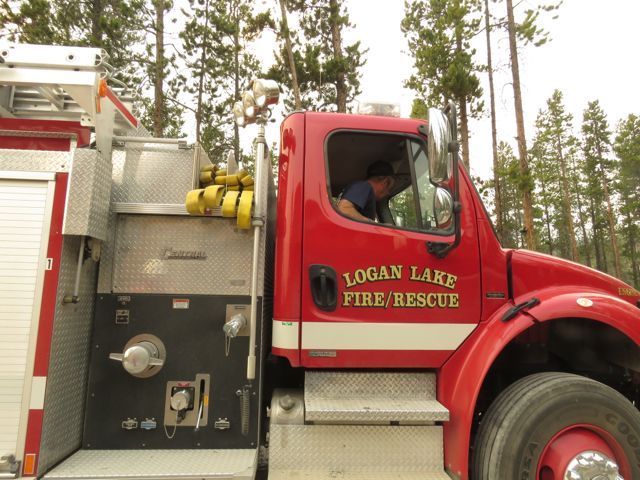 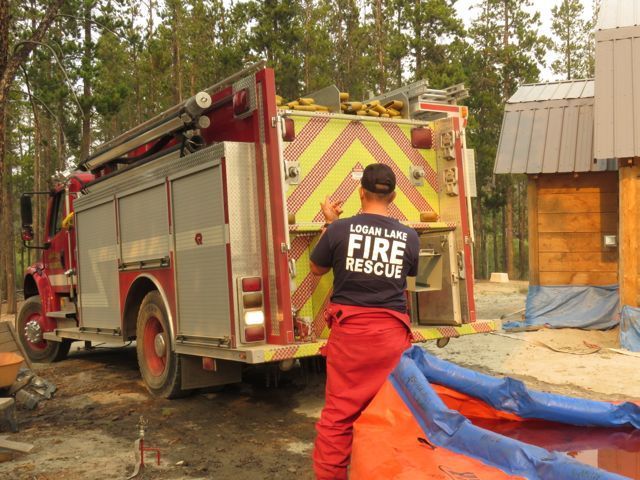 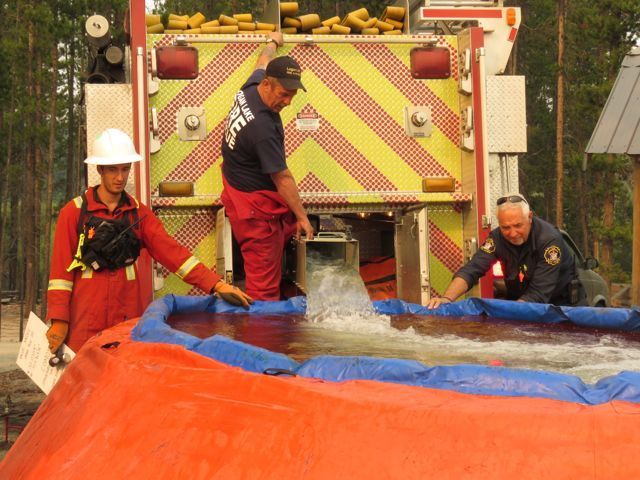 The man on the left is holding a sign board that will be put on the highway. 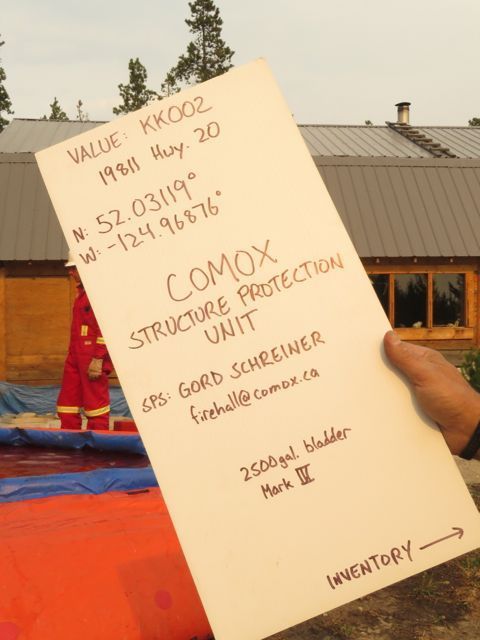 On the reverse side is a list of equipment.

A sprinkler was placed at each corner of the house.  The firefighters liked my metal roof, and also the steep pitch of the lower part as it would direct water to the bottom of the walls. 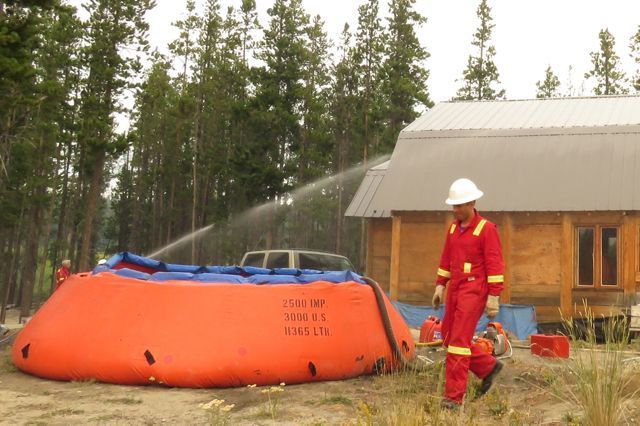 The only thing left to do was to test it.

I have been given instructions as to how to start the pump – but how successful I will be if I have to do it I don’t know because the firefighters had great difficulty in getting it going.  Most pumps in circulation are only a year or two old but this one is apparently ancient.  But in the event of an emergency they will be in and out.  The bladder holds enough water for 2 hours so for long term use they will have to keep bringing tankers in to fill it.  Now, when I look out of the window, I get an orange surprise. 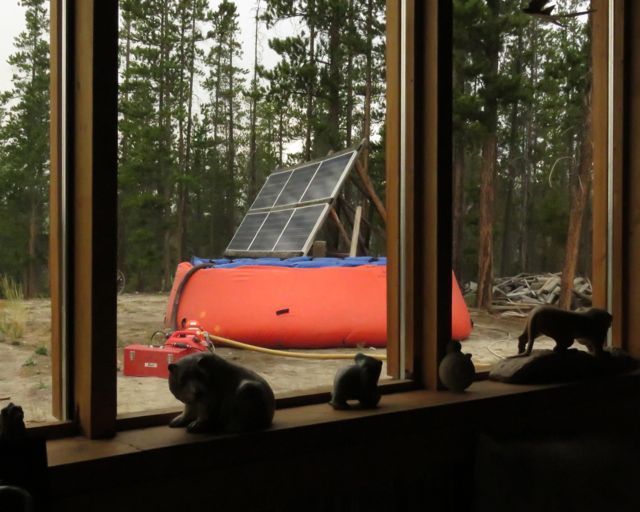 And wouldn’t you know it?  As soon as everyone had driven away, it started to rain!  Only a dribble, but it persisted all night and it was surprising how far down into the silt of my yard it penetrated.  It certainly won’t put the fire out, but it will give everyone breathing space. 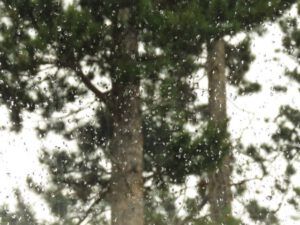 This morning I still could not see any mountains, but this time it is as much due to cloud as rain.  The air smells so sweet with the dust laid, but underneath there is a definite aroma of wet bonfire. 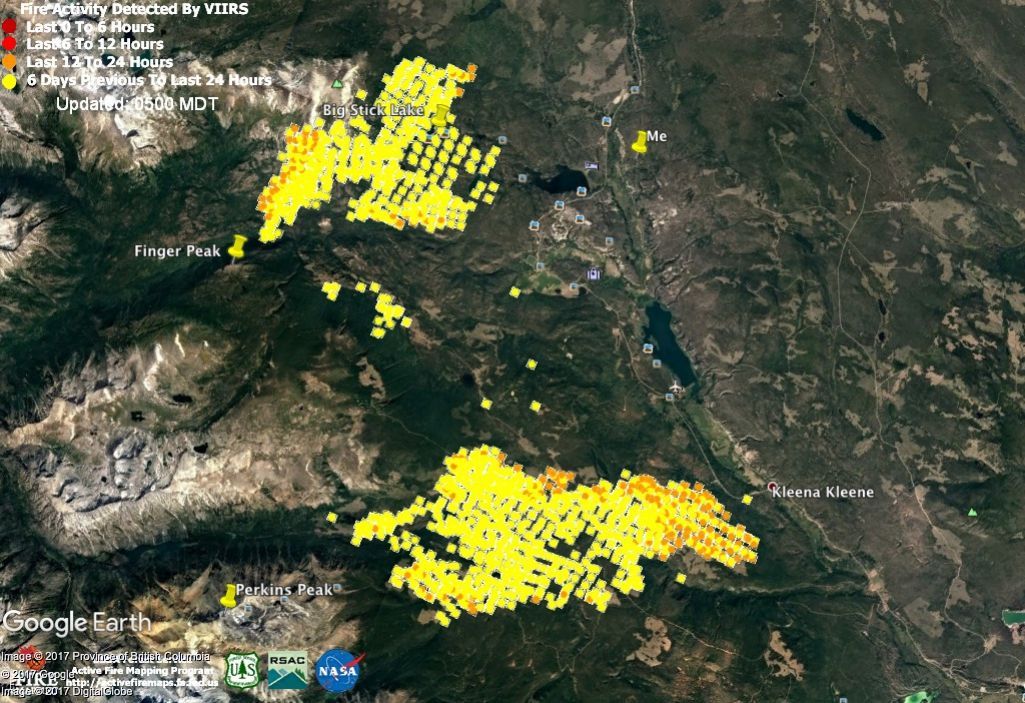 By the way, Kleena Kleene on this map has not been in that location for at least 60 years.  The old highway used to go to the east of One Eye Lake.  Downtown KK is now halfway between One Eye Lake and “me”.

But just because GE shows yellow, or even very little activity at all, doesn’t mean the fire is out.  Here is the Precipice fire copied at the same time. 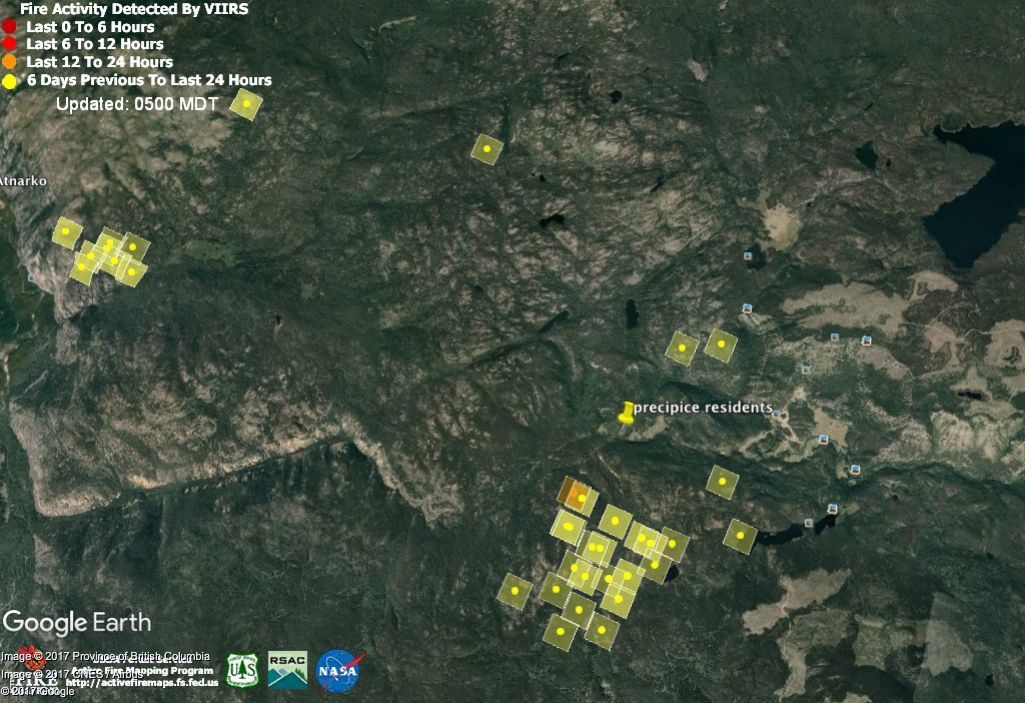 And yet these people are surrounded by flames and smoke.  Their Facebook page shows the drama day by day.  Yesterday, 9 helicopters were bucketing (I never heard anything here.) Dozens of ground crew are still working daily. 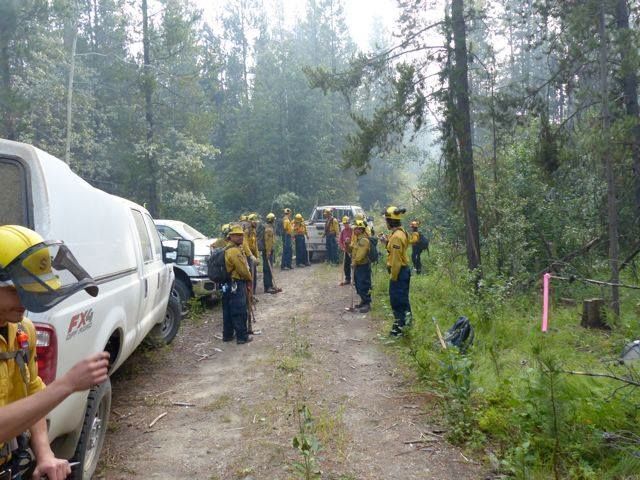 Fireguards have been built. 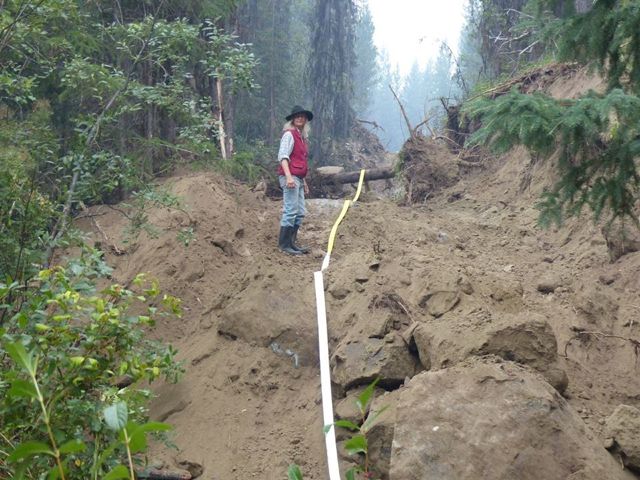 My friends are also doing their bit.  Cutting out their road. 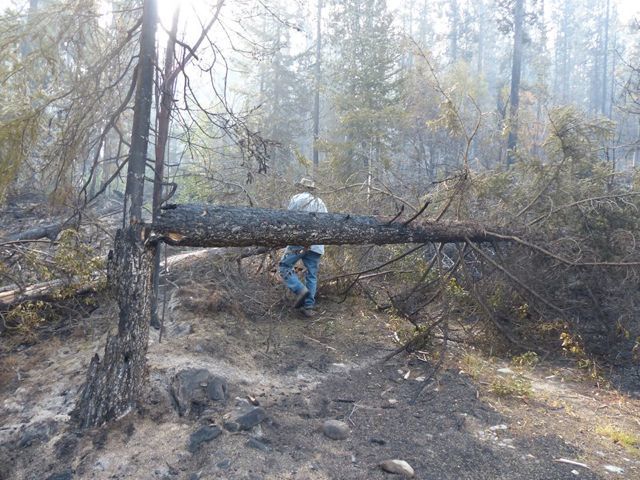 One of their favourite trees was burning. 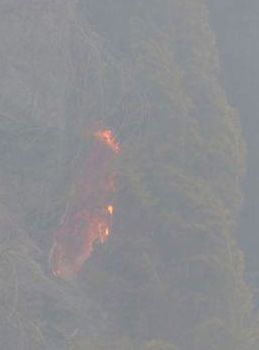 A helicopter bucketed it, but my friends carried water and and targeted the blaze directly. 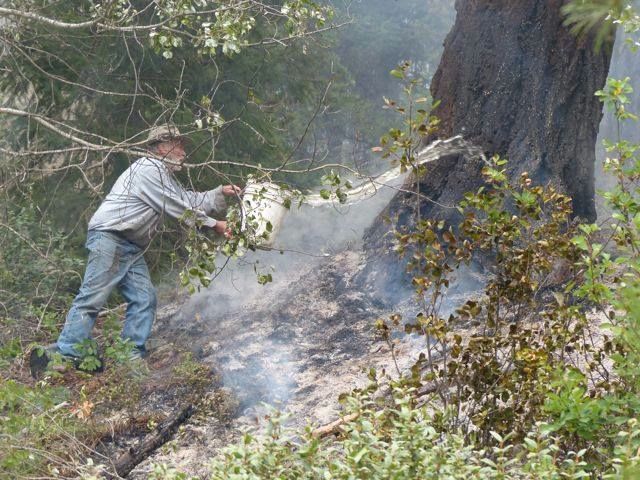 And throughout all this, hay was being harvested. 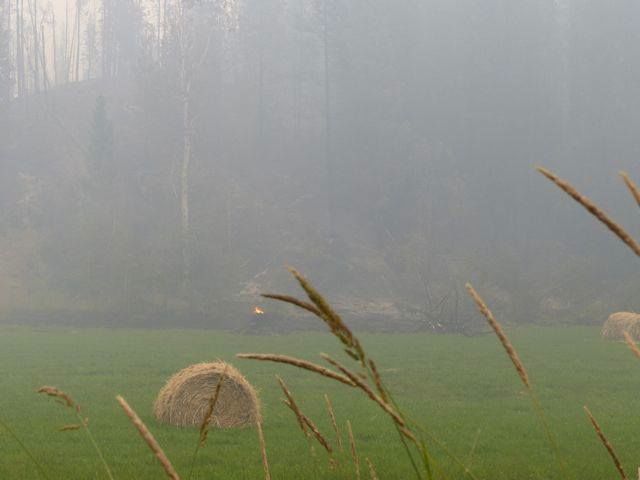 The Precipice people have had a one-on-one relationship with this fire, and also the firefighters, through the whole 6 weeks.  Until the last couple of days, when I met the lady police officer, Ken, and the sprinkler crew, I have felt very remote from the whole process.  Although I love – and need – solitude, at times it seemed very lonely shut down in my smoke-and wind-filled corner of the world.

Many areas of the Chilcotin have already been upgraded for Evacuation Order to Alert (but not Tatla Lake and Kleena Kleene.  Highway 20 is still closed in this area also.) The forecast is for a warmer spell and then more rain – no doubt the instability will produce winds, too.  But the nights are getting longer and cooler, and with this bit of drizzle, I feel that we have at last turned the corner.

Tomorrow is the solar eclipse.  It will be only partial here.  I wonder if the smoke will let us see it.