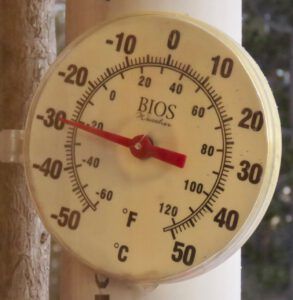 It’s been this cold twice during the last couple of weeks, about 10 days ago and this morning, new year’s eve.  Mostly, however, it is around -20C at night – but not a lot warmer during the day.  We have had some snow and there has been a sudden flush of birds at the feeder – about 8 redpolls, 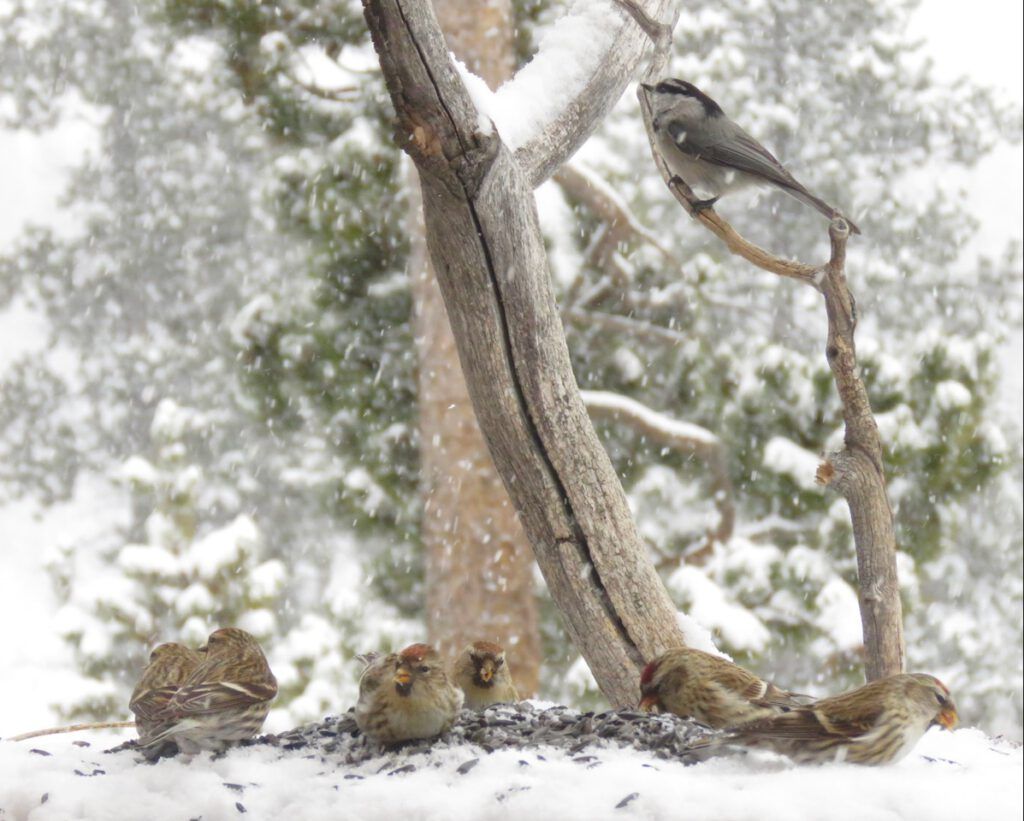 And at last some pine grosbeaks. 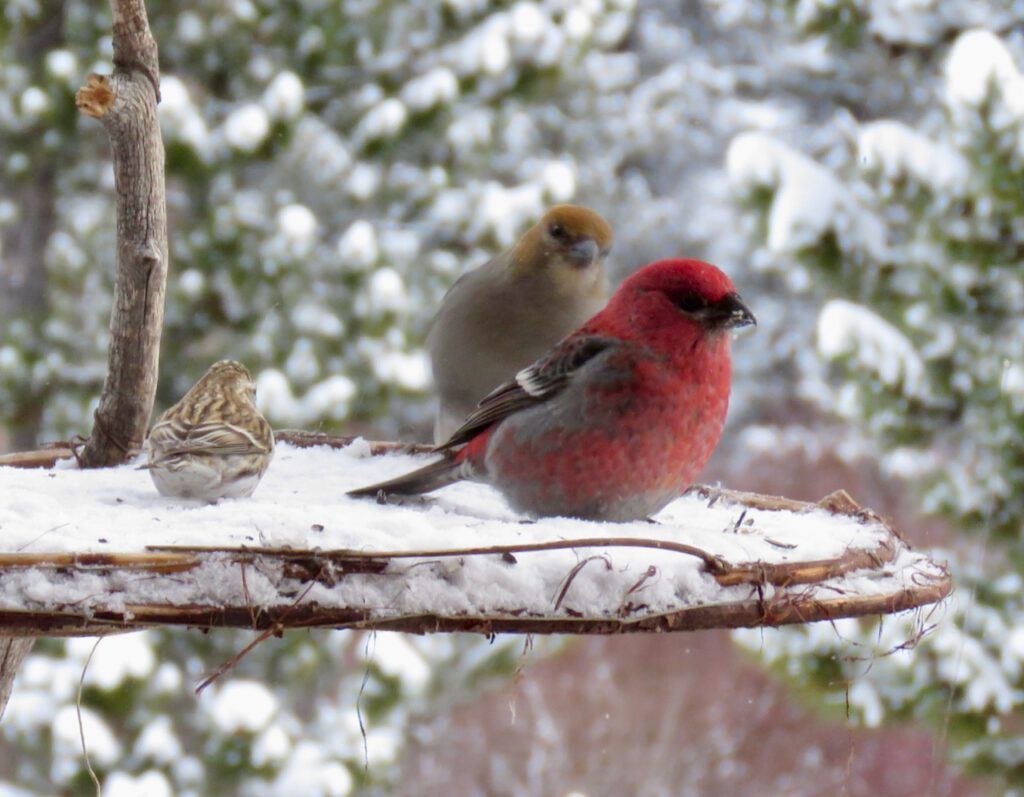 One day I saw a great grey owl on the phone line beside Highway 20. 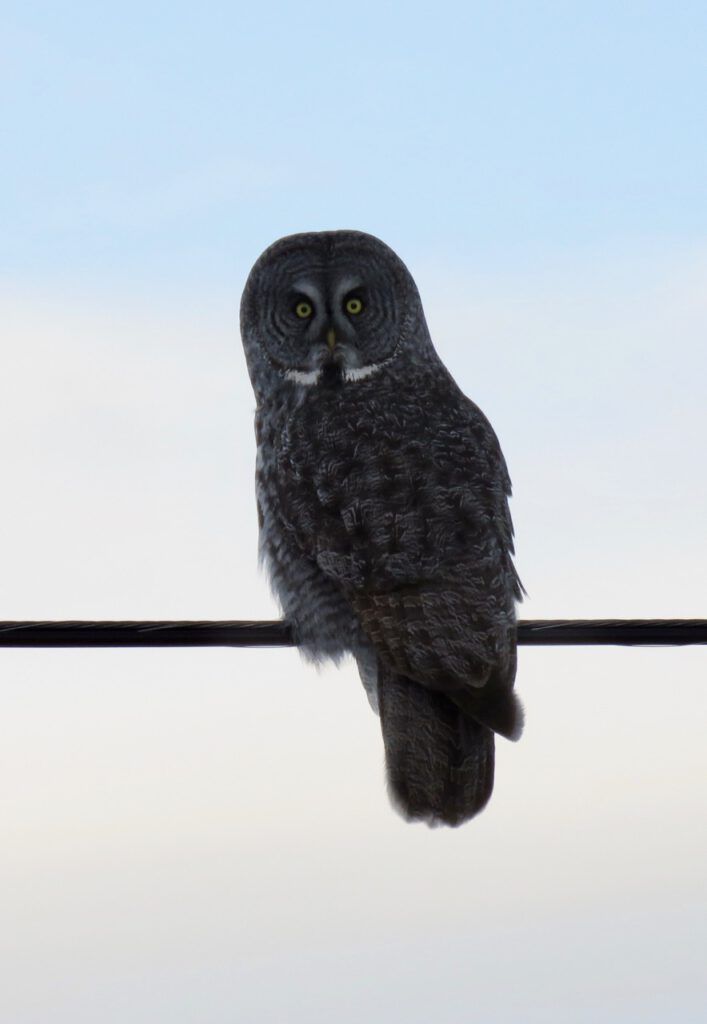 Yes, he is looking at me – but that is his back view.  Not sure what I was, he wondered if I would look any different if he switched his head the other way. 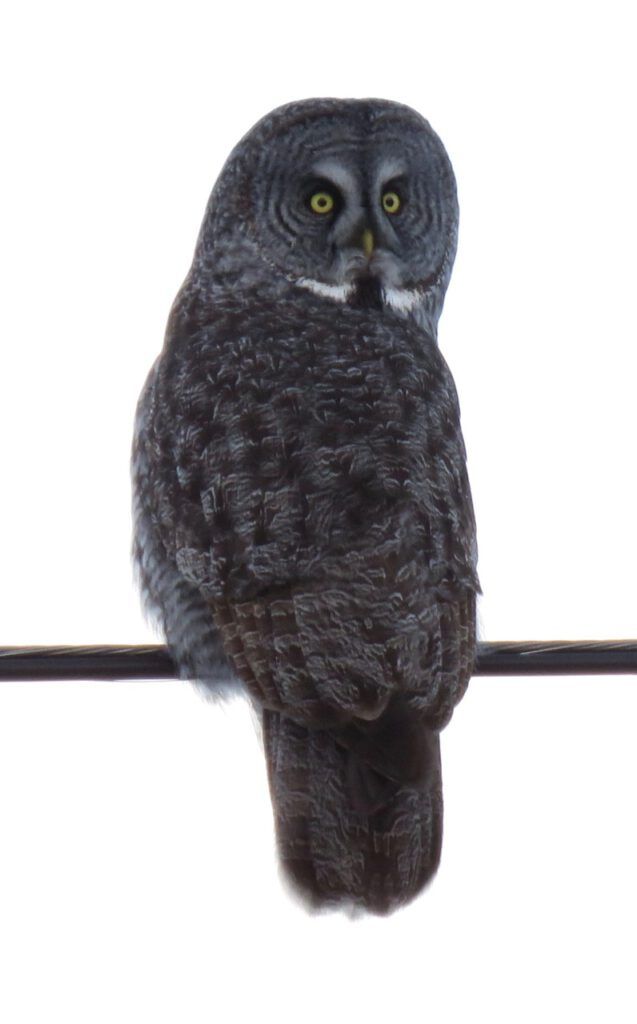 We’ve had a few dull days and, when it is grey I must use the generator to charge, but if it is cold I have to drag it inside and warm it up before I can start it.  It is very heavy but I put it on a dolly so can wheel it about.  We’ve also had some great sunshine. 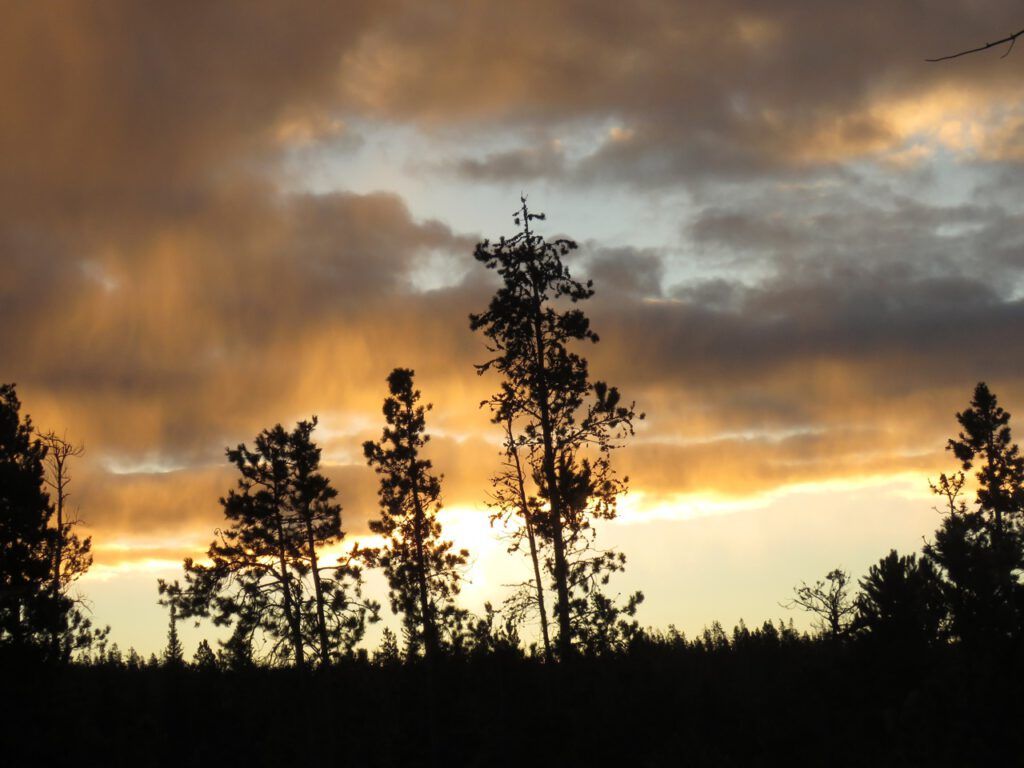 And this is where the sun set on the shortest day.  I was able to take a picture from the same spot last night and already the sunset point has hit the conifer between the sun and Finger Peak.  We’re getting there! 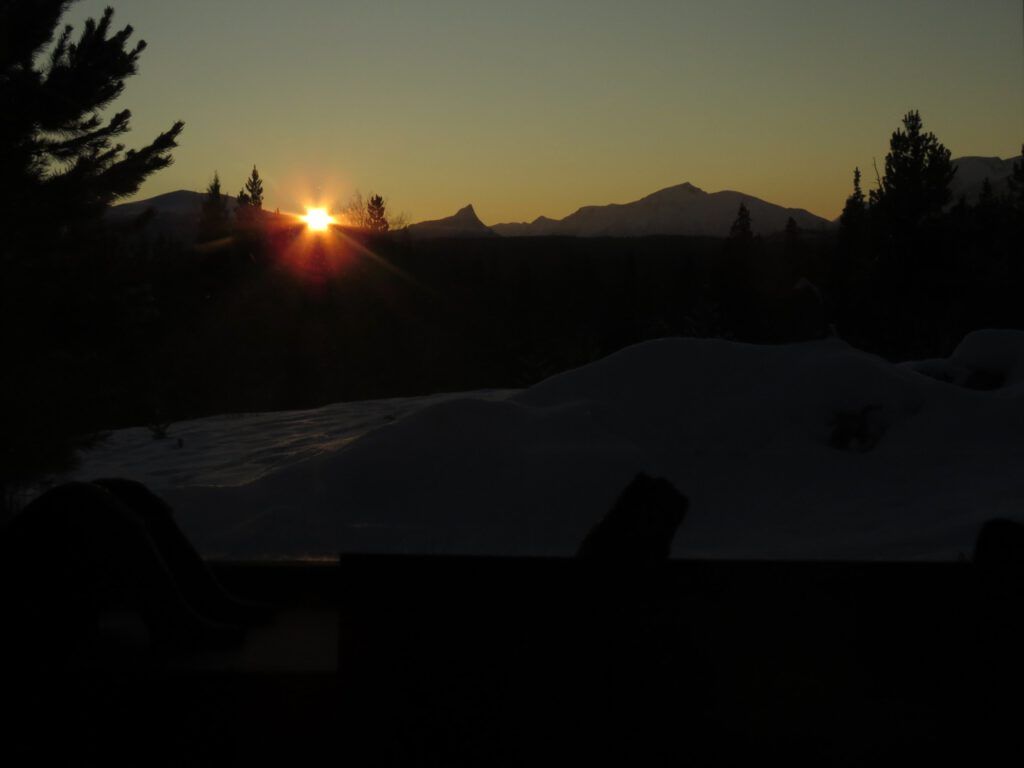 When I arrived home from Bella Coola, it was to find that the squirrel had been busy.  You will remember how he brought all the seeds I threw on the deck onto the feeder tray.  He obviously thinks this is a good idea. 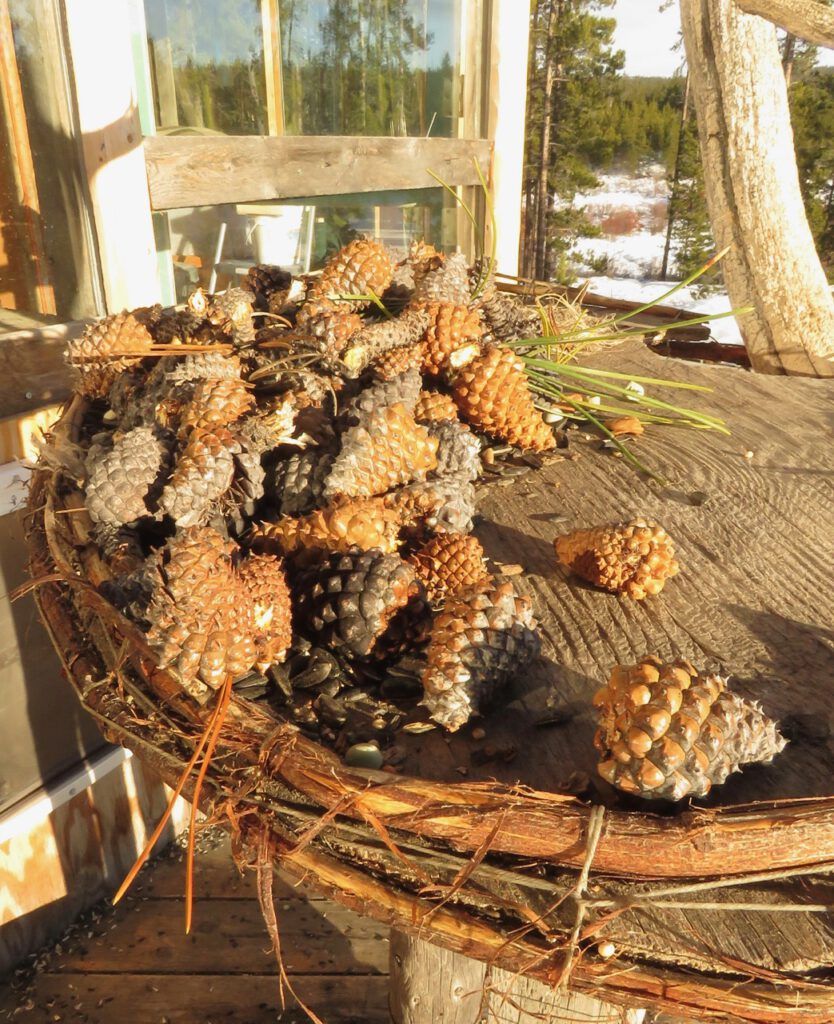 Instead of throwing them back onto the snow I started to fill a bucket.  But he keeps finding more.  I now have a 5-gallon pail full. 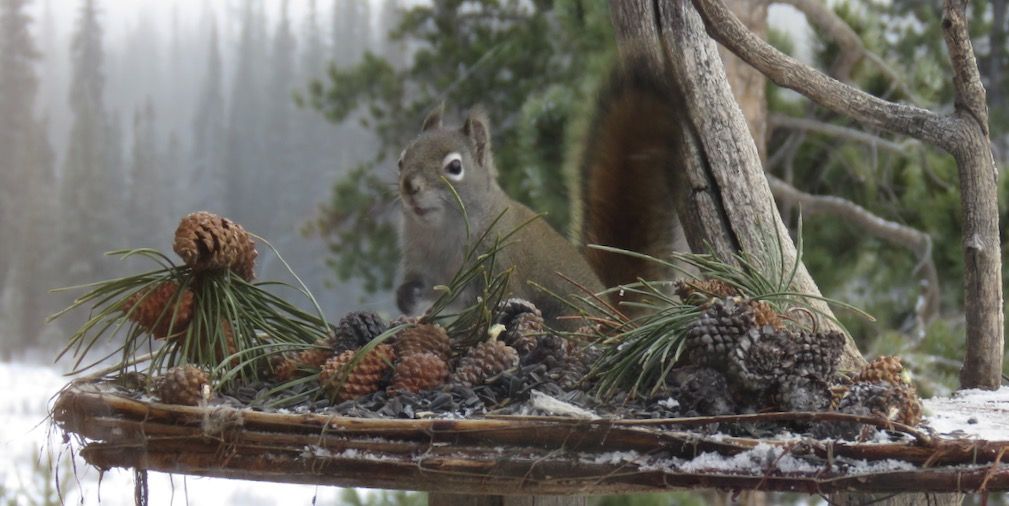 He is definitely not sharing, as one reader of this blog hoped – he vigorously chases any bird off the feeder or the nearby branch whenever he comes by.  Fortunately he spends a lot of time elsewhere so the birds get their fill.  He won’t starve – he will always have sunflower seeds to eat. 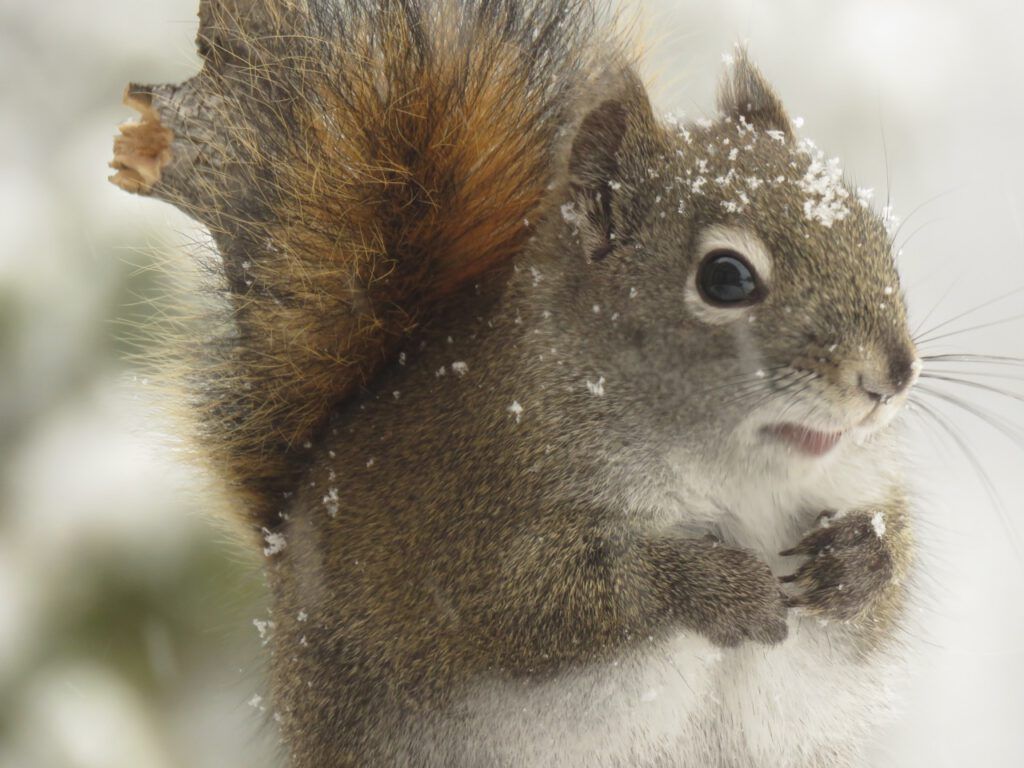 A few days before the solstice I went to Tatla Lake and noted that a machine was pulverizing the vegetation under the power line. 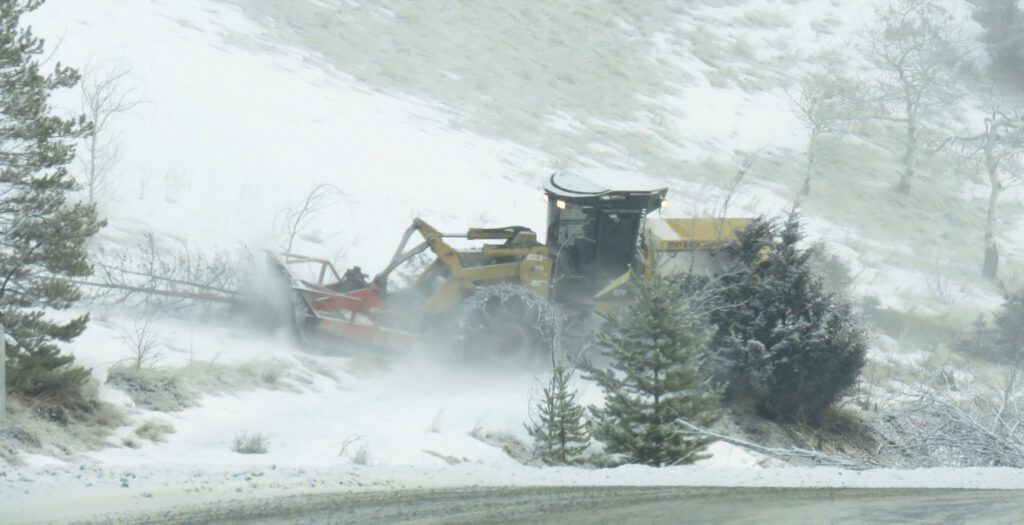 As my trusty chain saw was in the van, I picked a nice tree just ahead of him to decorate for the Solstice.  This year I splurged on tiny LED Christmas lights; by splurging I don’t mean forking out to Canadian Tire, I mean using more power at a time when I can ill afford it.  Well, if I have to run the generator a bit more often, it’s worth it.  I basically live in one room.  Each wall has windows in it so the lights are reflected and re-reflected in all directions. 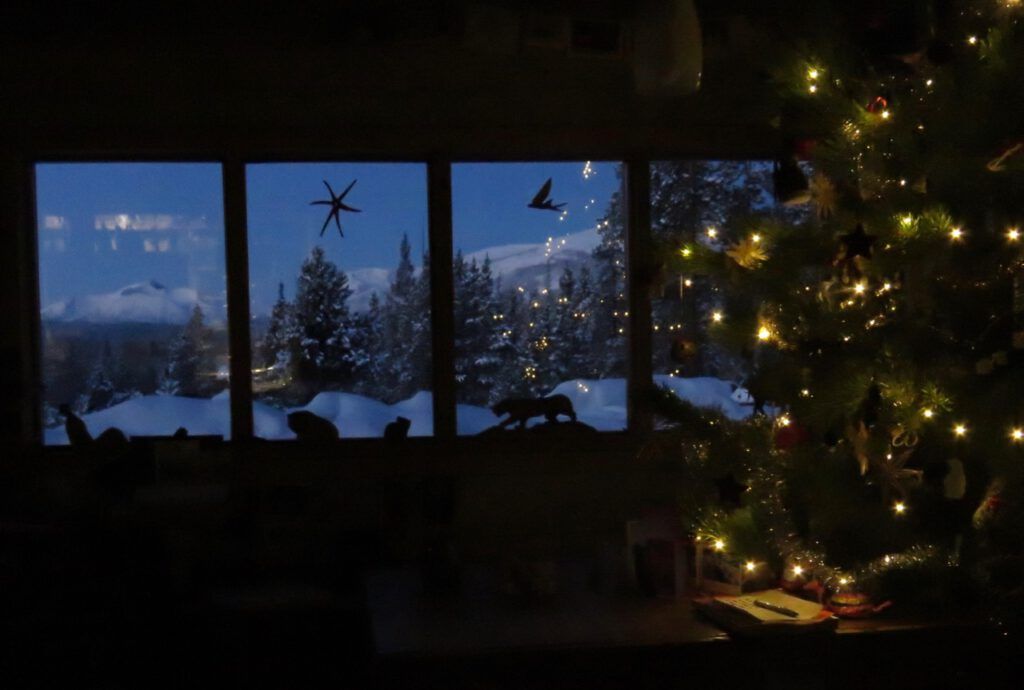 On Dec 25th a few of us gathered for a pot-luck turkey dinner.  It was east of Tatla lake and my friend has a gorgeous view.  It was another lovely, sunny day but of course the sun goes down too fast! 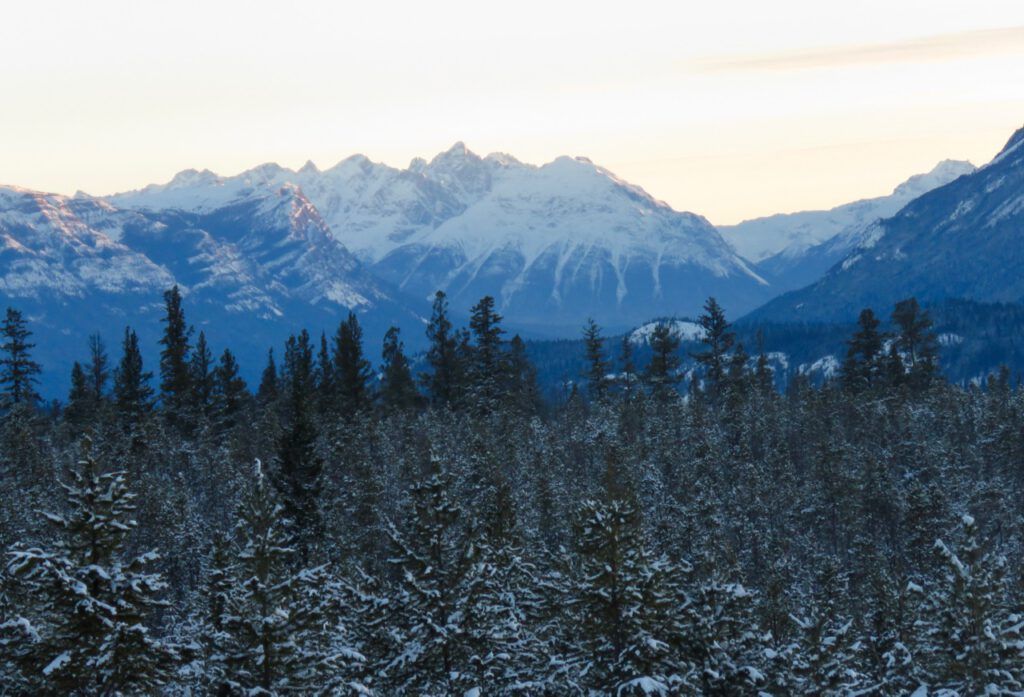 The following day was full of ice crystals, and there were two sundogs at sunset. 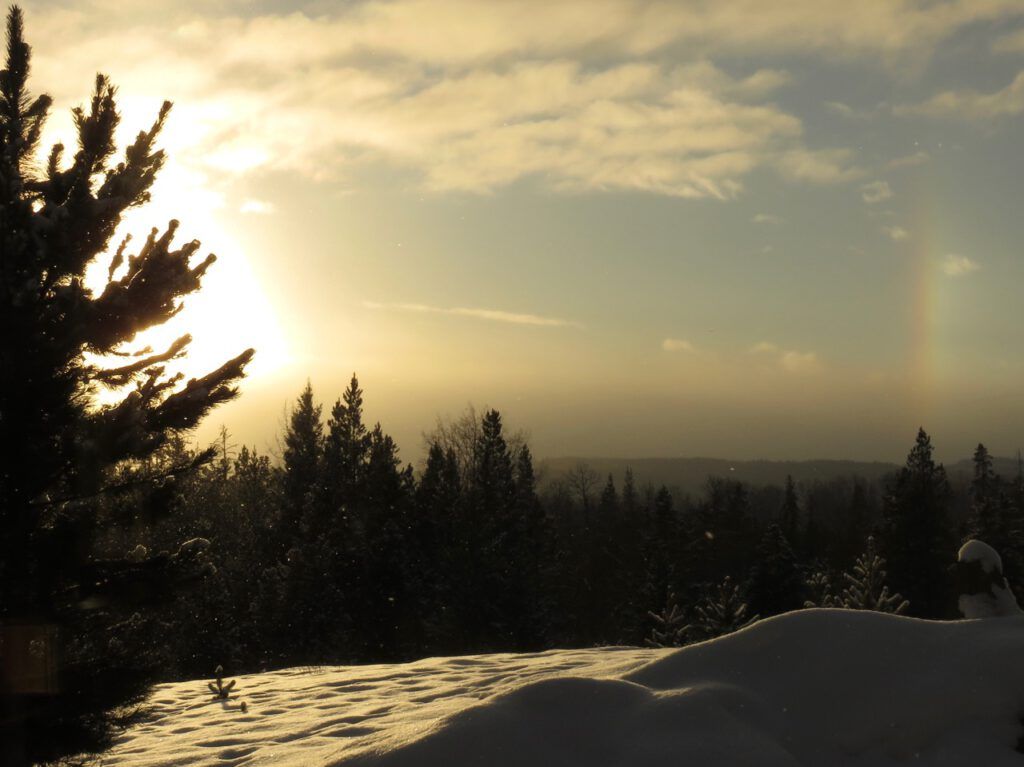 Then we had more gorgeous weather.  Even the outhouse looks attractive. 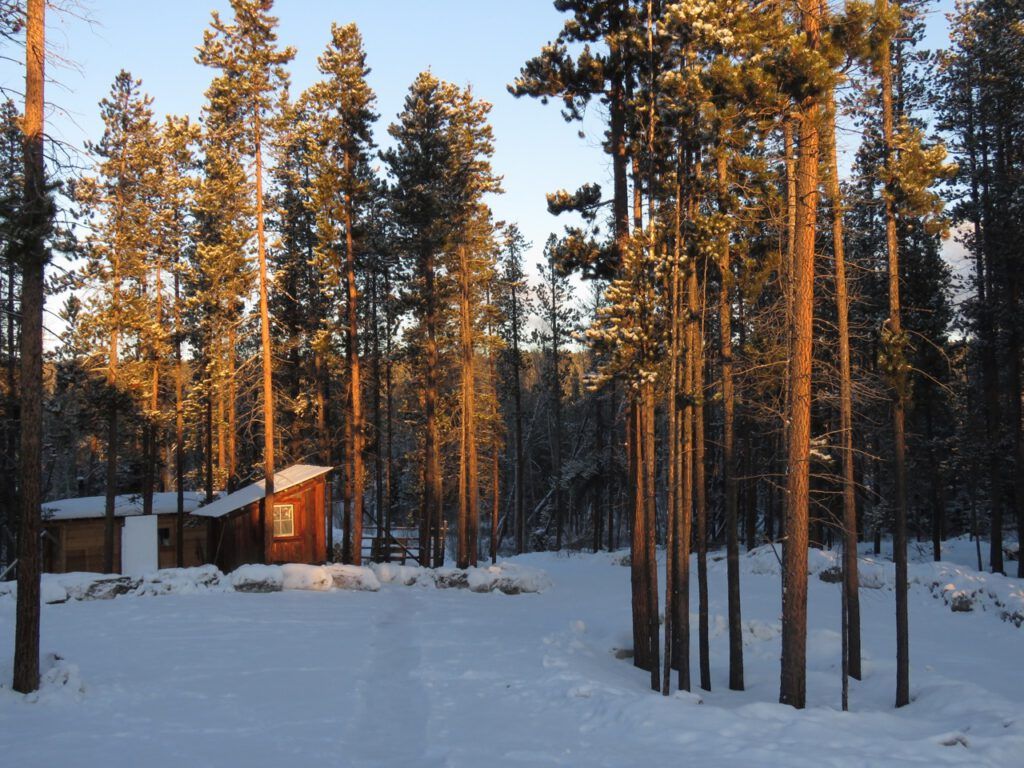 The burned slopes of Nogwon look naked.  The fire was very fierce there. 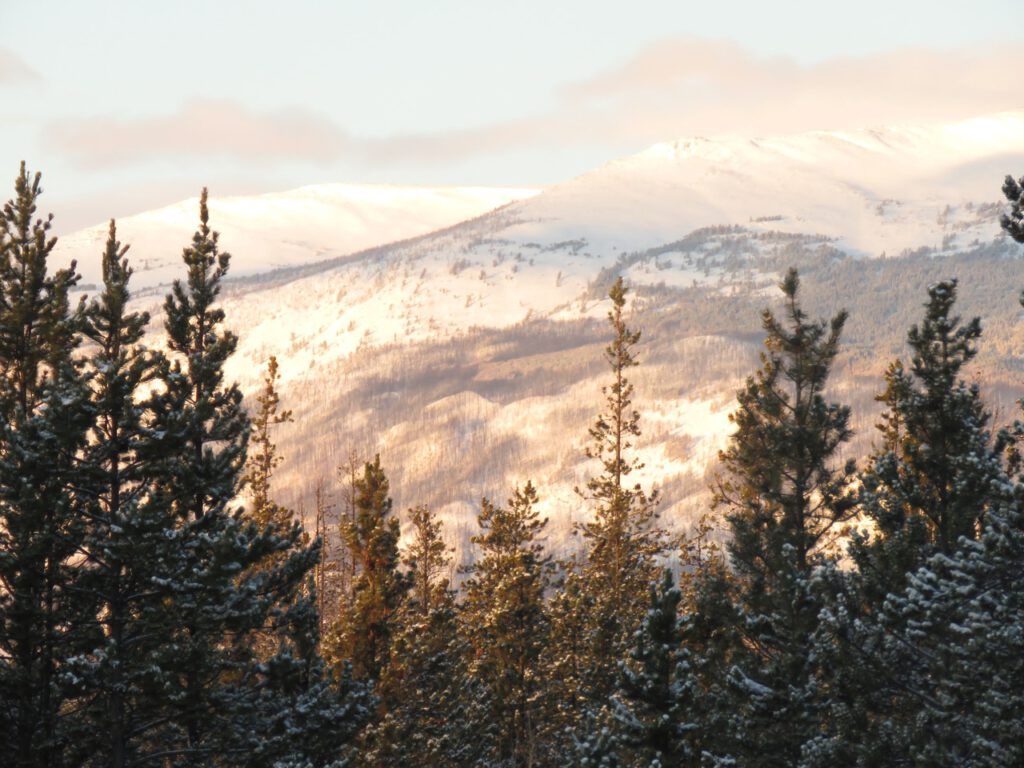 I hiked onto the dunes.  There is not much snow in the forest. 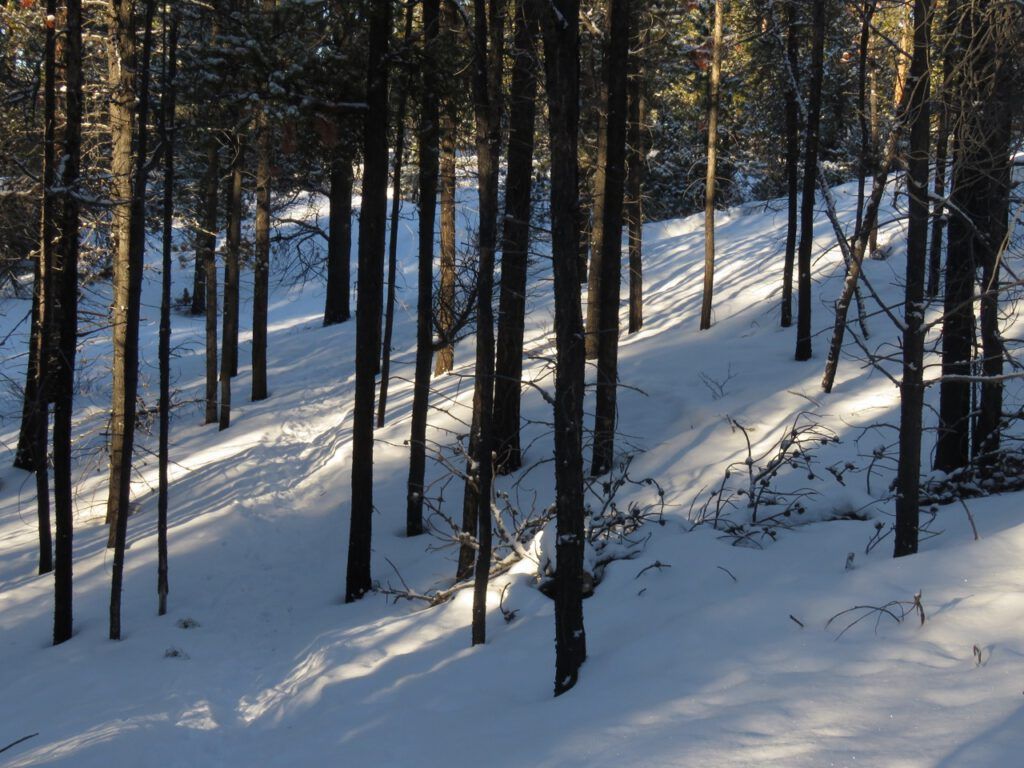 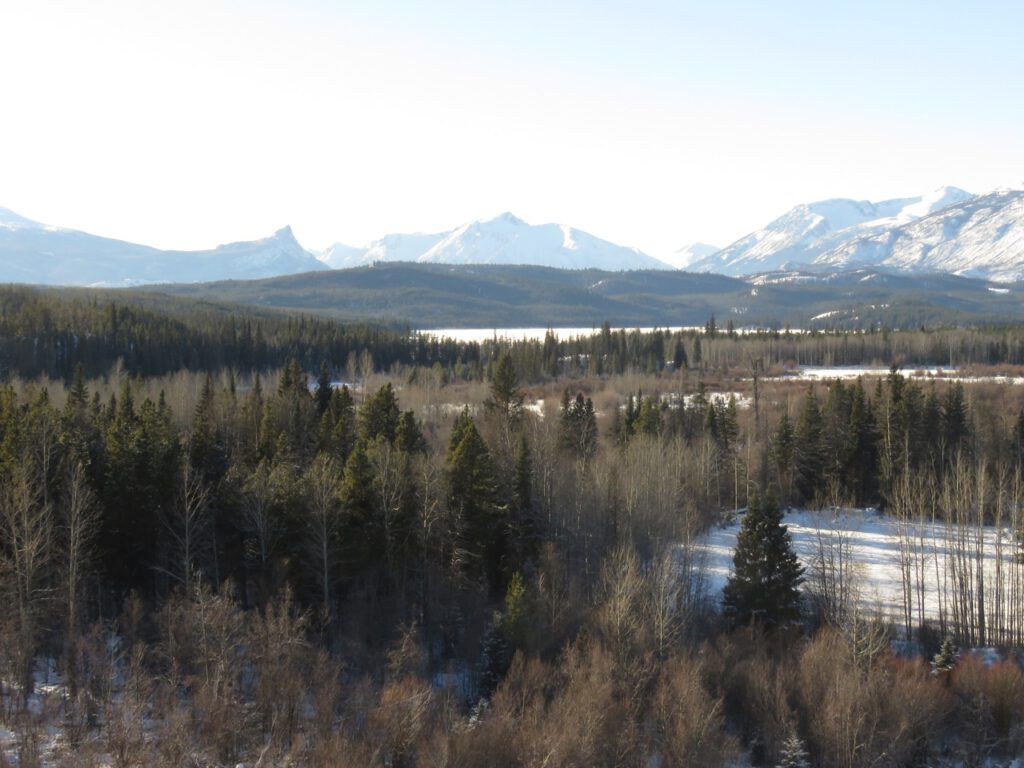 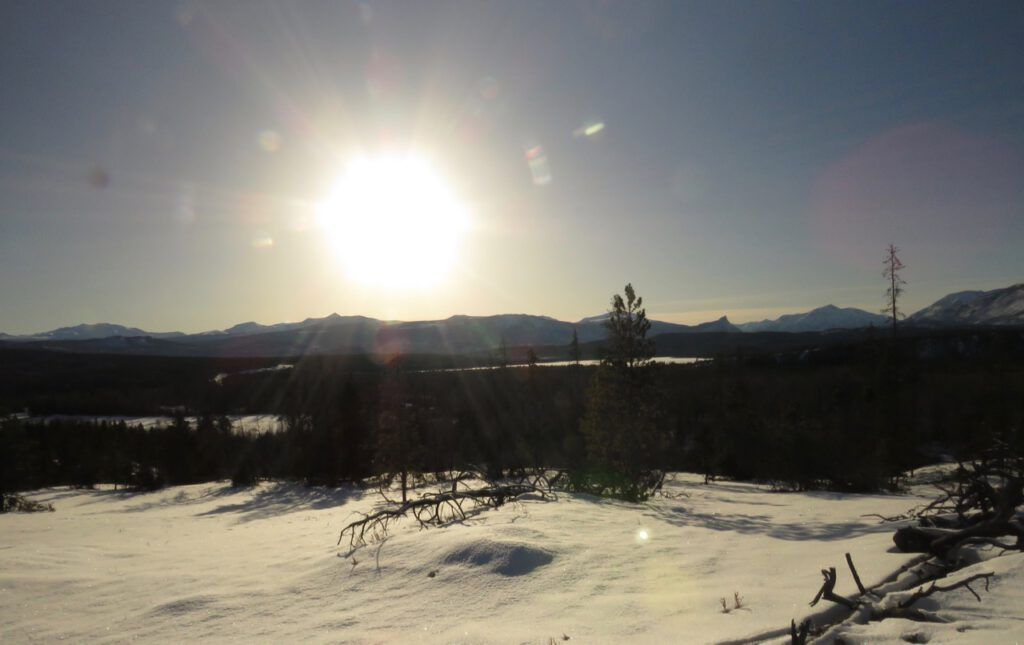 Warm air comes up from the earth through the branches of a juniper and makes crystals. 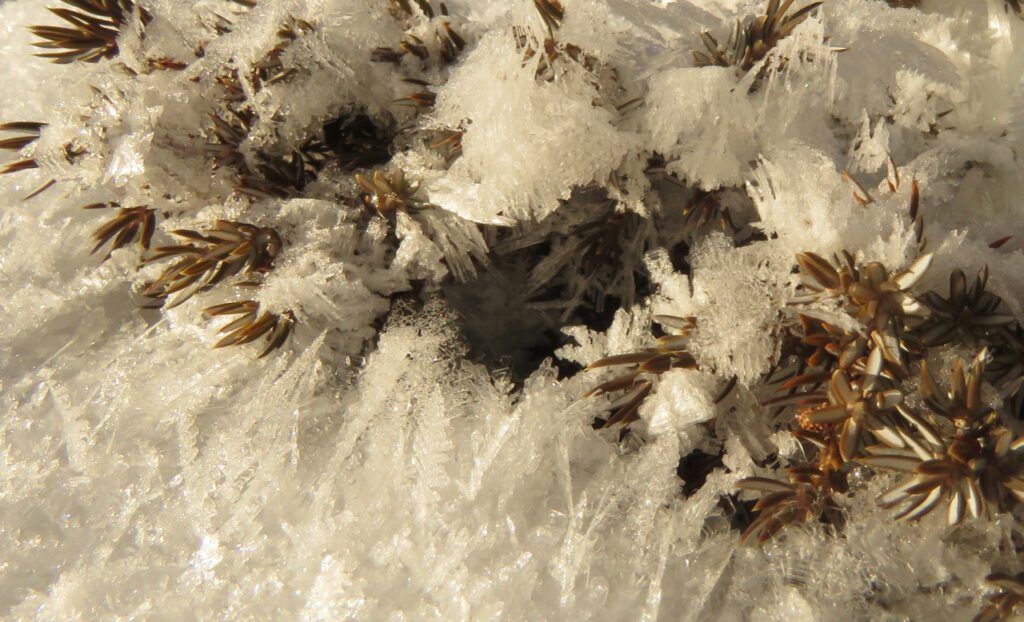 The river is freezing up. 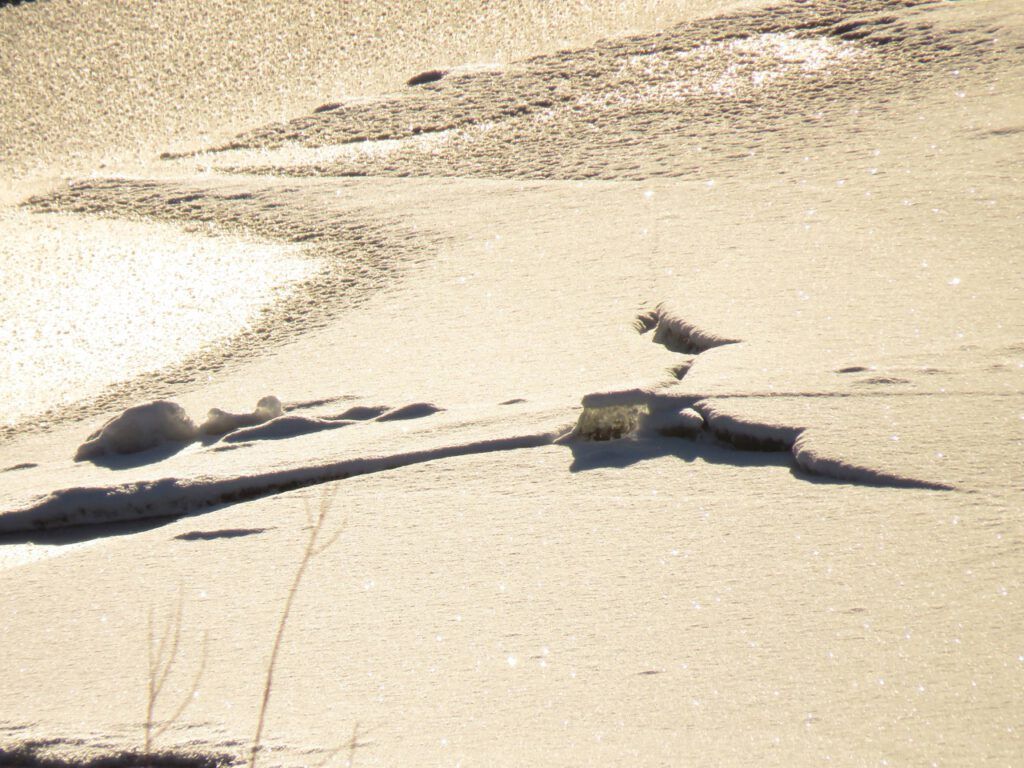 In this next picture you can see greenish anchor ice in the water.  It is growing from rocks. 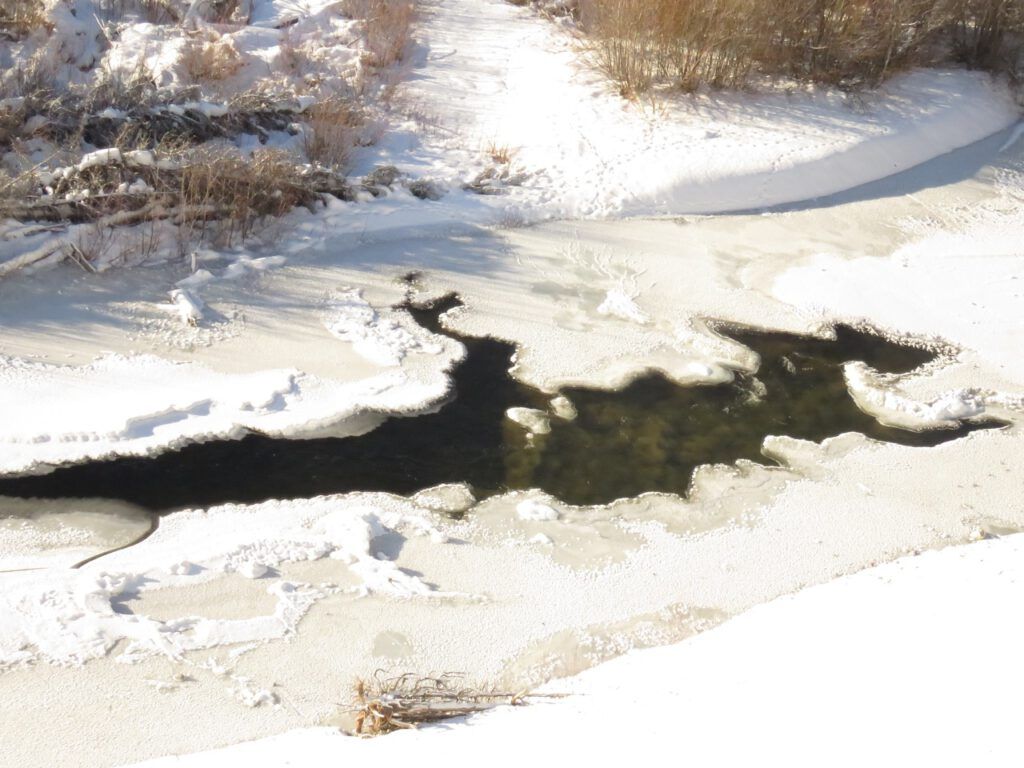 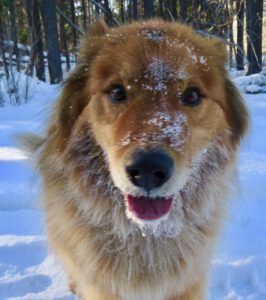 Lots of Yule logs along the road! One wonders what they make from these piddly little trees. 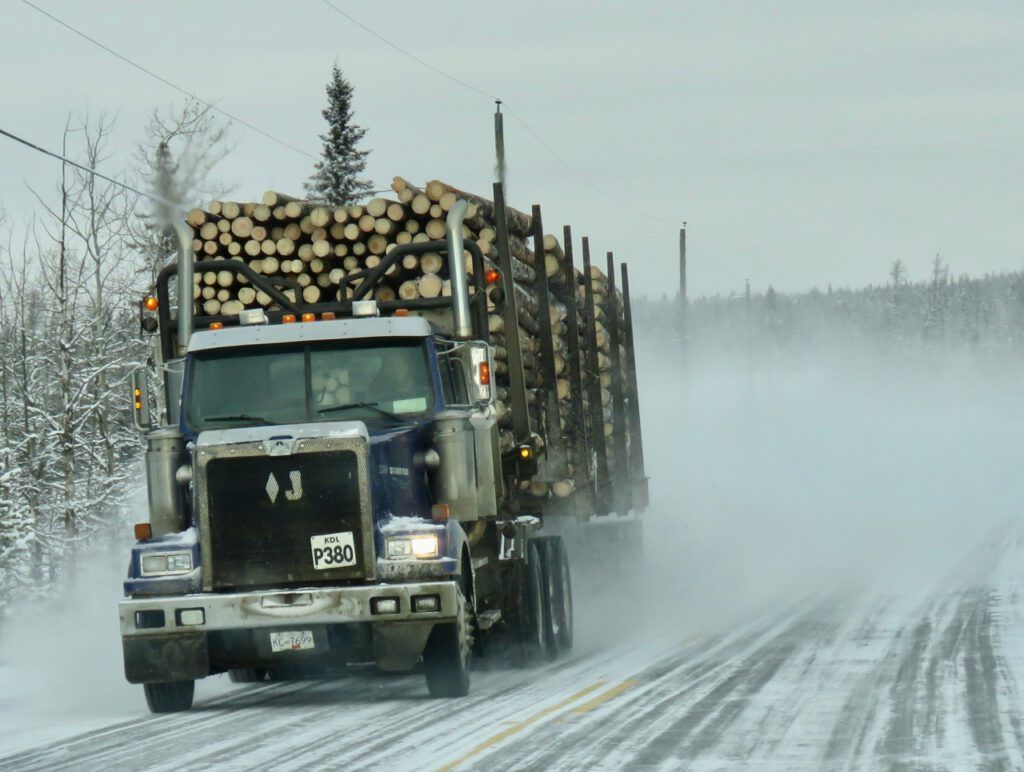 There had been a bit of fresh snow and I was enormously surprised to see a plough truck in the ditch.  It wasn’t that slippery but the plough often makes the edge of the road look flat when in fact the snow covers a drop-off, and I suspect the driver hit that.  Sure made me slow down, though.  No one appeared to be hurt. 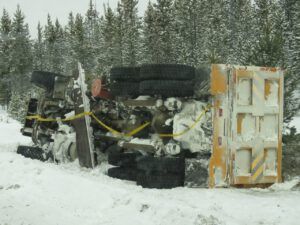 Last night the moon rose into a clear sky – going to be cold! (It’s not quite full.) 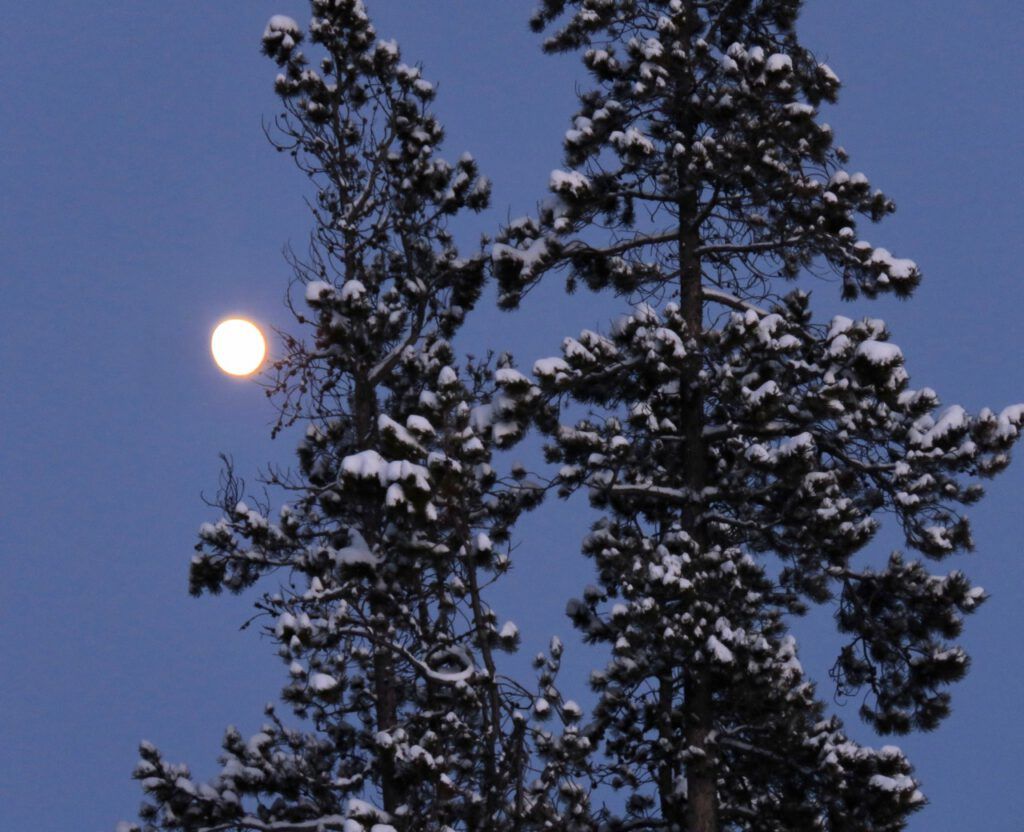 This morning it was back down to -30C again although as I write, at sundown, cloud is coming in and it will likely warm up.  Here is Badger asking to come in after his breakfast.  (He is in all night.) 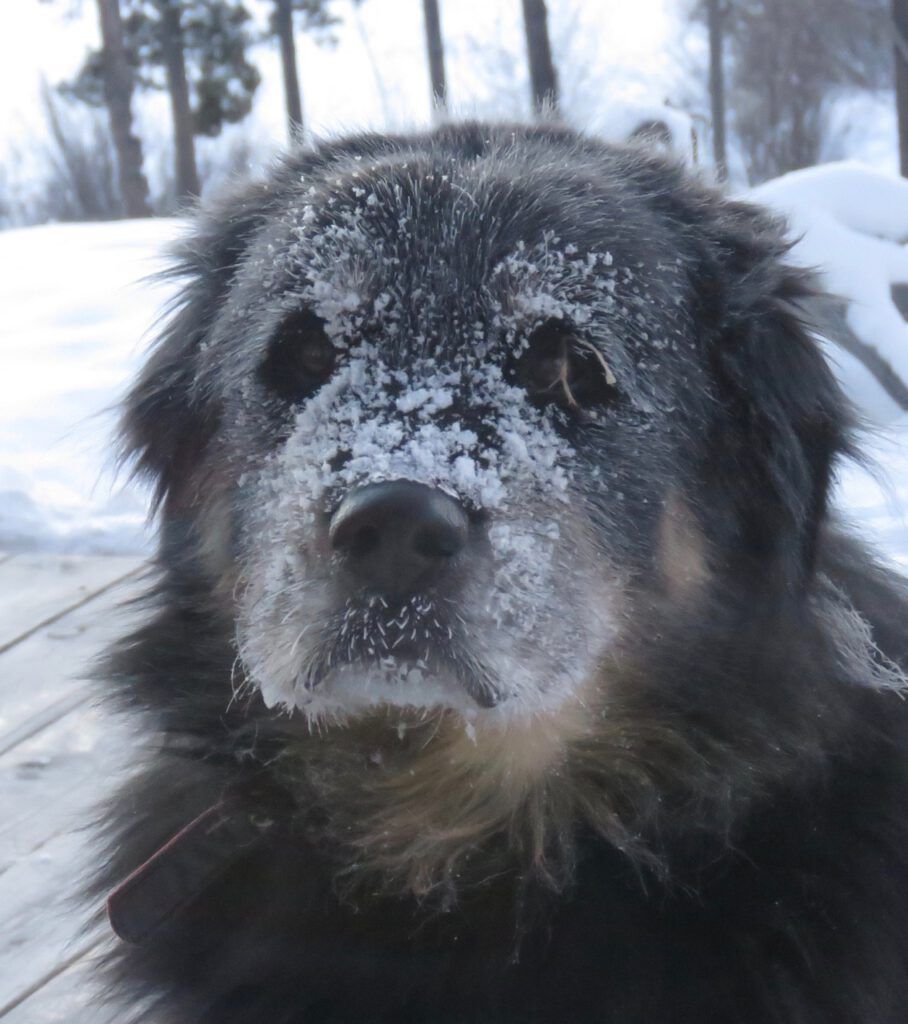 And this is what it looked like when the sun finally lit the world. 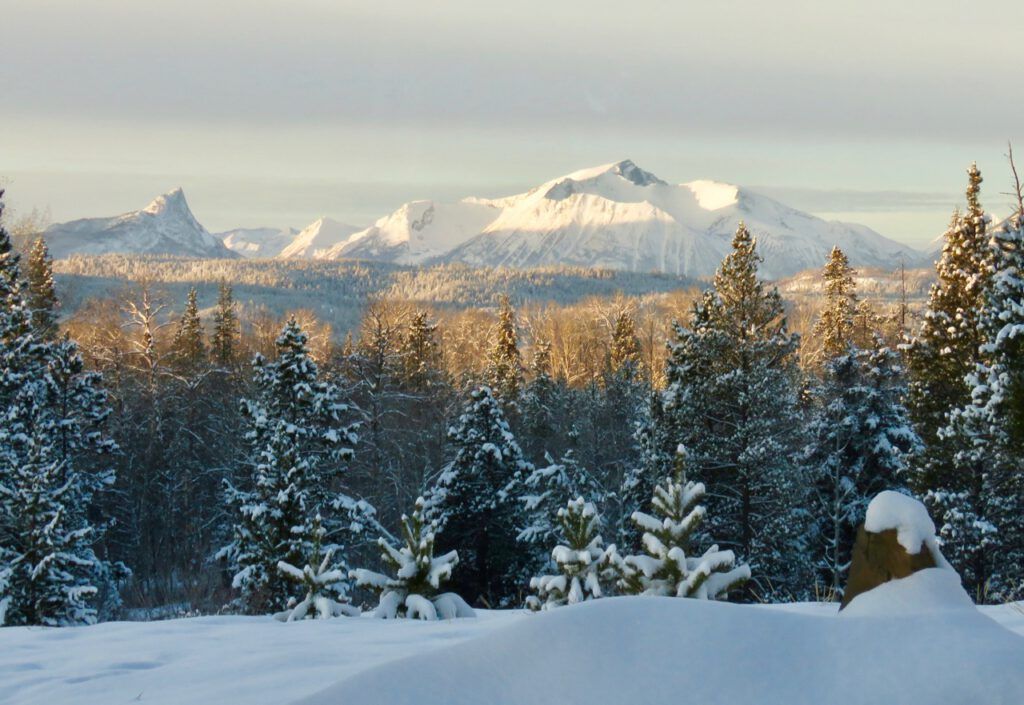