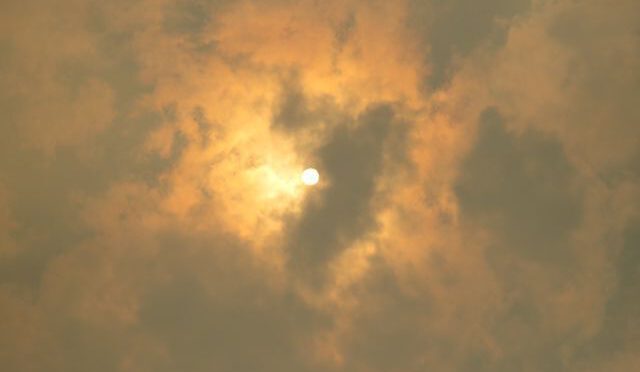 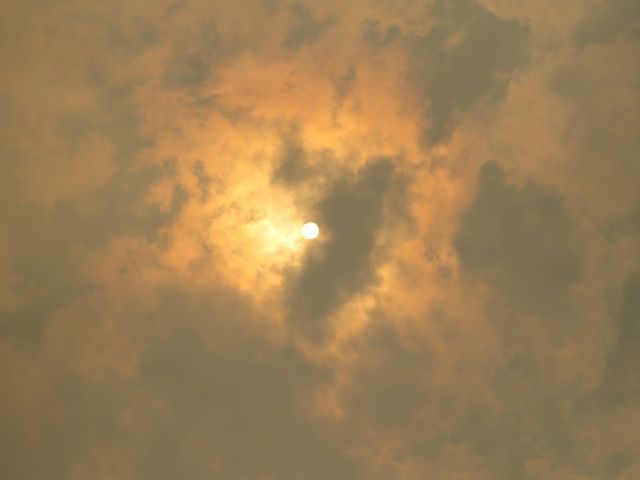 Thank you once again all the people who have written.  Your concerns are comforting.  Here is the latest fire update.

The Bella Coola Valley, where I have been staying while under evacuation order, seems to be on a different planet. 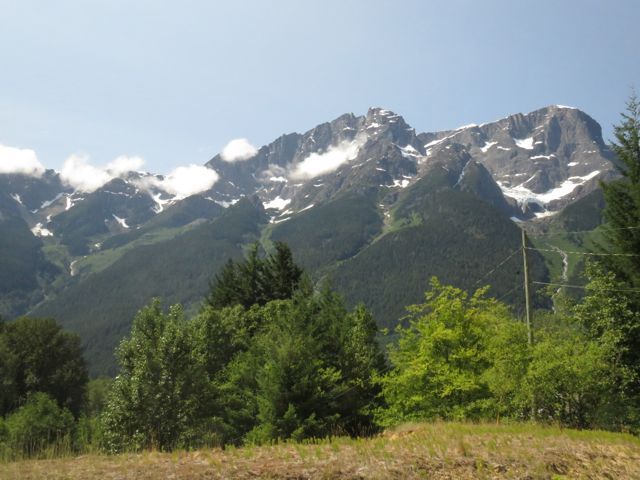 However, when the wind changed, they were not immune from smoke.  The 45 firefighters and 8 helicopters organized a back burn on the Precipice fire, and the wind was just right to bring the smoke down the valley.  Sunrise: 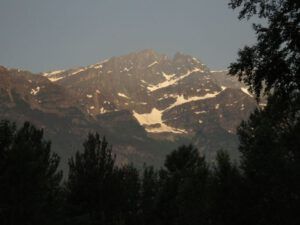 A few hours later.  The snowfields seem to float like ghosts in the smoke. 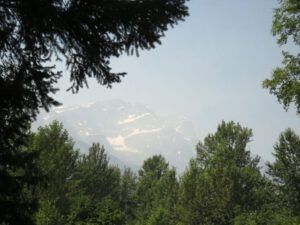 Yesterday, I went home to water the garden for the second time.  I had found by chance that there was a rescue headquarters in Tatla Lake and phoned them about the situation.  I knew several ranchers had stayed.  The dispatcher said that although the area was still under evacuation order they were making exceptions for locals as long as they knew who was home and who not.  I should keep in touch.  They also informed me that now “real” firefighters were working as well as locals – despite the fact that the BC Active fire page for KK says nothing about them.

I left at about 6.00:am. As I started to climb up the Bella Coola Hill I got a look into the Atnarko valley, where the smoke was lying like a lump of cotton wool.  This is where I used to walk when I built my first cabin at Lonesome Lake. 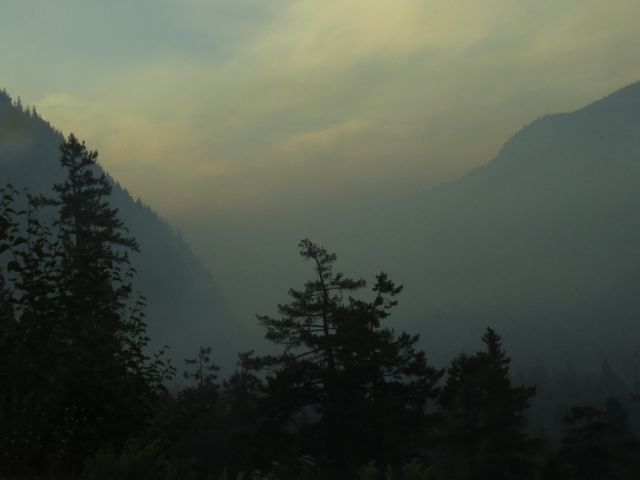 But by the top of The Hill, I had driven out of it. 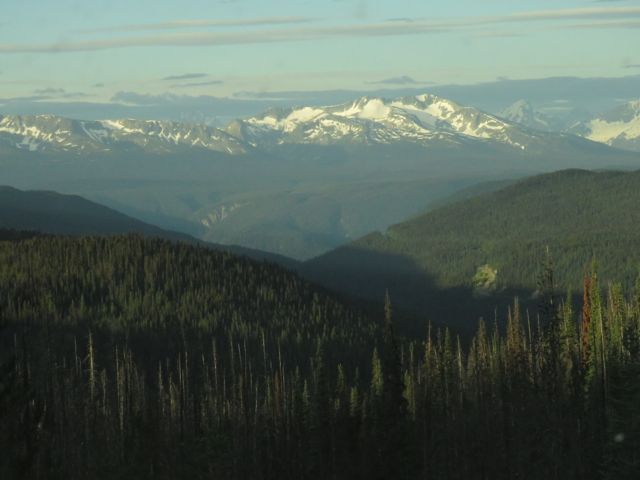 Near the top are a few patches of alpine meadow flowers, the kind I should have been seeing at Nuk Tessli right now.  The white bog orchids smell heavenly when the sun shines on them. 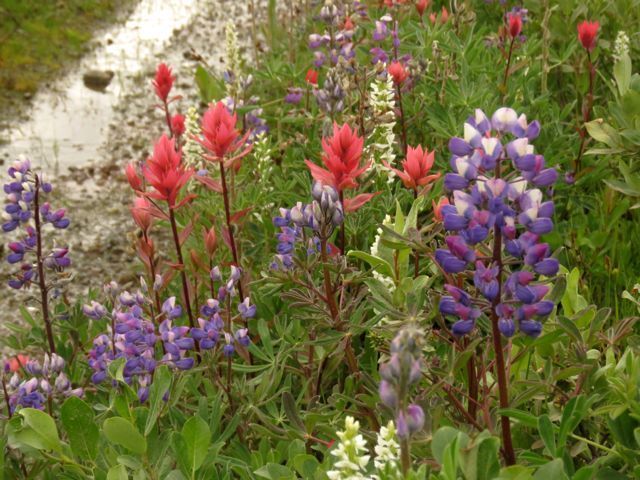 I soon drove back into the smoke zone, however.  It cast an orange light on the foxtail barley. 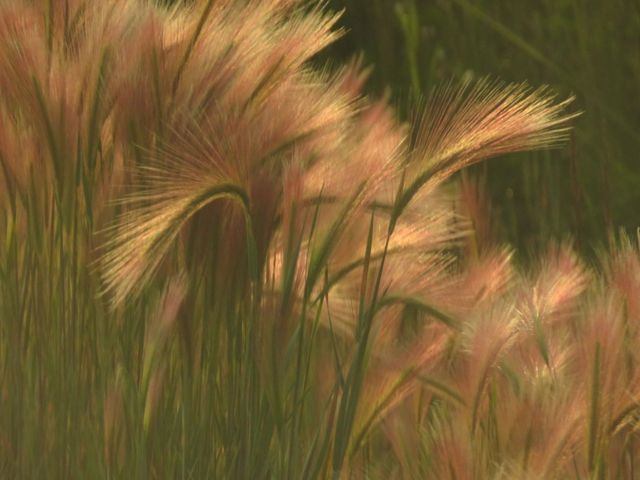 And brought out the red in the massed clumps of paintbrush beside the road. 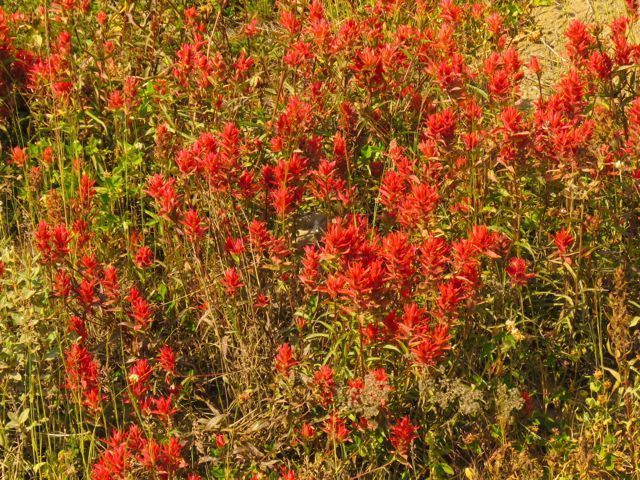 Close to home there was a small air movement from the south, which is perfect for bringing the smoke to my place.  This was taken about 8 km from home, which is just over the ridge on the left. 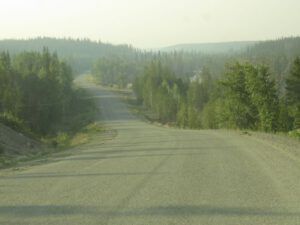 I had been away 4 days since I last watered the garden, and one of these had been cold.  My potatoes told me there had been a good frost! 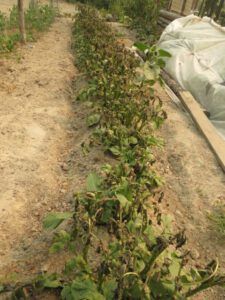 They are pretty resilient, though.

I started the watering routine and simply went inside with the doors and windows open to enjoy the gorgeous peace and quiet of my own space.  Sun filtered through the smoke (the cabin I am staying in down valley is very dark) and the birds were singing, oblivious of all the drama. Despite the strong bonfire smell, for the first time in a very long while, I felt able to relax.

Helicopters started muttering and rattling over the fire zone and when the watering had finished, I headed to downtown Kleena Kleene to see if I could get any pictures.  Finger Peak was just visible at the west end of the fire. 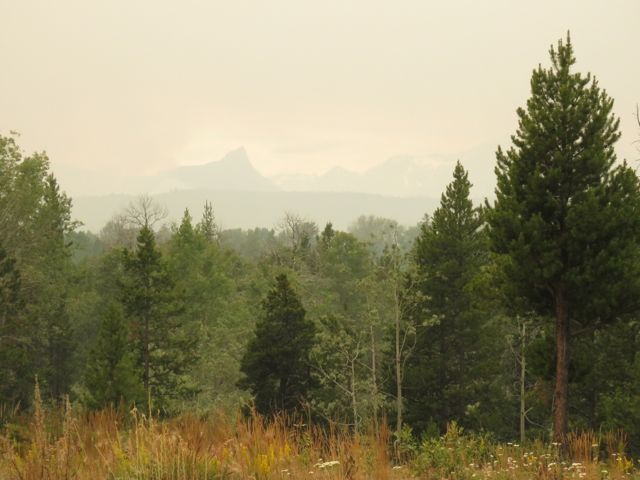 The roadsides are in full growth (they would normally be mowed  by now but those vehicles would not be allowed) and as always I was intrigued by the smoke-filtered light. 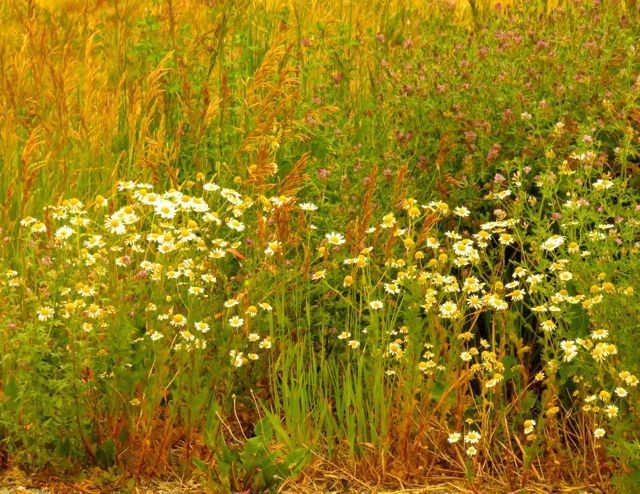 But at downtown Kleena Kleene I couldn’t see much. 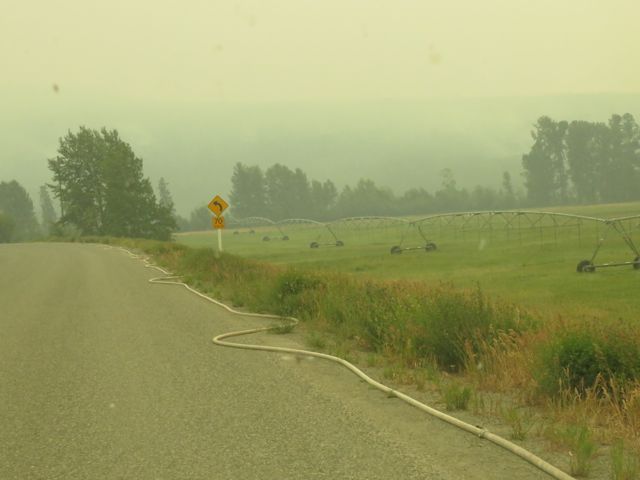 Our community holds maybe 25 people spread over a stretch about 15 kms long but no one lives at downtown Kleena Kleene now.  En route I had seen new roads bulldozed through the forest and several caches of pickups and fuel.  Here a hose came from the Kleena Kleene river for at least 2 km. up the hill and down the dump road.  (See map at end of this post.)  Across the fields not much could be seen. 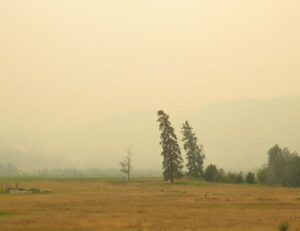 The wind was freshening a little from the southwest and the fire was more active at the eastern end. 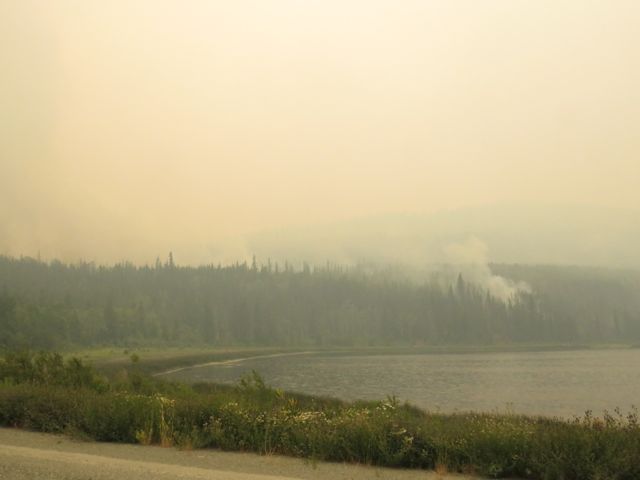 Before I left home, Modis (the heat sensor site) showed the fire was pretty hot very close to the road.  A very large helicopter was working with a bucket.

The road wasn’t closed – but I felt very strange being the only non-official person on it.  Despite the scream of the pumps and beat of the helicopters, the place seemed strangely silent and deserted.  I inched around the corner and realized the chopper was picking up water from a shallow pond right beside the road.  The bucket was HUGE.  I could visualize the chopper swing a little too fast and the bucket swaying and knocking me for six.  Obviously the pilot didn’t need the extra responsibility of watching out for me so I turned tail and drove for home.  How those guys can work in all that smoke beats me.

As I drove back to my turn-off, a cop car flew by with its lights flashing.  I turned along my road and thought I’d better check the phone.  Sure enough, there was a message from the search and rescue office.  “Please call at once,” they said.  The message had come that, right where I had turned back, the fire was now out of control and they didn’t think they could stop it from jumping the road.  I had to leave at once.  I hadn’t really unpacked so within half an hour I was out of there.  I met both the cops and the search and rescue people who were checking to make sure I’d gone.  (They are also patrolling all the abandoned places to make sure there’s no looting.)  It was all one big panic.

A couple of hours later I was back on the Bella Coola Hill where smoke was just a memory. 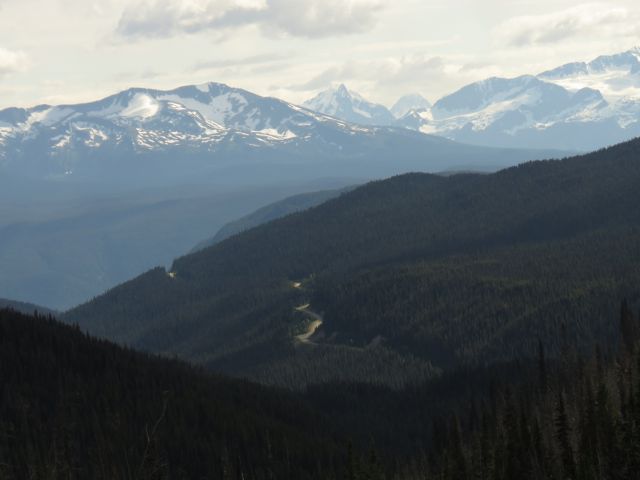 I immediately checked all the fire websites.  (See previous post for these references.) Nothing looked different.  Drive BC was not showing the road was closed (although Modis shows the fire heat has crossed the road.).

Last night it rained a bit in the Bella Coola Valley.  It often rains there when it is still bone dry at home. Showers had been forecast on the Chilcotin.  At noon I phoned the search and rescue centre.  There it has absolutely poured!!!  All day!!!!  Fantastic news!  However, it will take more than one rain to put out these kinds of fires, and the showers were supposed to come with thunderstorms.  My only worry is that new lightning strikes will start more fires in areas where my place would be much more vulnerable. At the moment it is fairly well protected by geography. 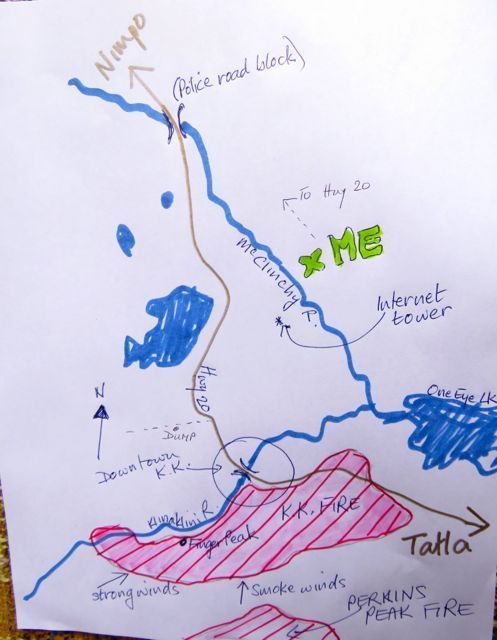 This map is not to scale but is roughly right.  The Kleena Kleene Fire Complex is nearly 6,000 hectares, and the Perkins Peak fire almost joined to it is about the same.  Modis shows the fire has crossed the road but at noon today I was old this was not the case.

My place is about 5 km from the fire but although we can get incredible violent gusts from the south, winds from that quarter are usually fairly calm.  They bring smoke but not much else. There are also 2 rivers and some open areas, many of them wetlands, for the fire to climb over before it reaches me.

The stronger winds come from the SW to the NW.  There are two or three people with cabins between the fire and One Eye Lake.

Of slightly more concern to me is the place where the fire crossed the Klinaklini River at it’s west end.  However, the crews are onto it big time – that is why the pump was in the downtown bridge running up the hill to the dump road.  There used to be a homestead down there so it would not be much work to open the road again to get heavy machinery in to build firebreaks.

We are not out of the woods yet, but things are looking a lot more hopeful.