In the middle of June, immediately after the Gymkhana (see previous post), I went to Williams Lake to pick up two volunteers from the Netherlands – Marien and Anna Marie.

The big focus of my summer has been making my place more fire-smart, and when I found out that Marien was an expert carpenter, I was able to put him to work enclosing my deck.  Decks are a major fire hazard as sparks whirl underneath and ignite the dry stuff under there – and bang goes your house.  I used old tarps to block it when the fires threatened last year. The job was not easy as there are all sorts of angles in the construction.  Now I have a permanent structure.  The left-hand panel is removable so that I can keep it open to dry out the structure so it won’t rot. 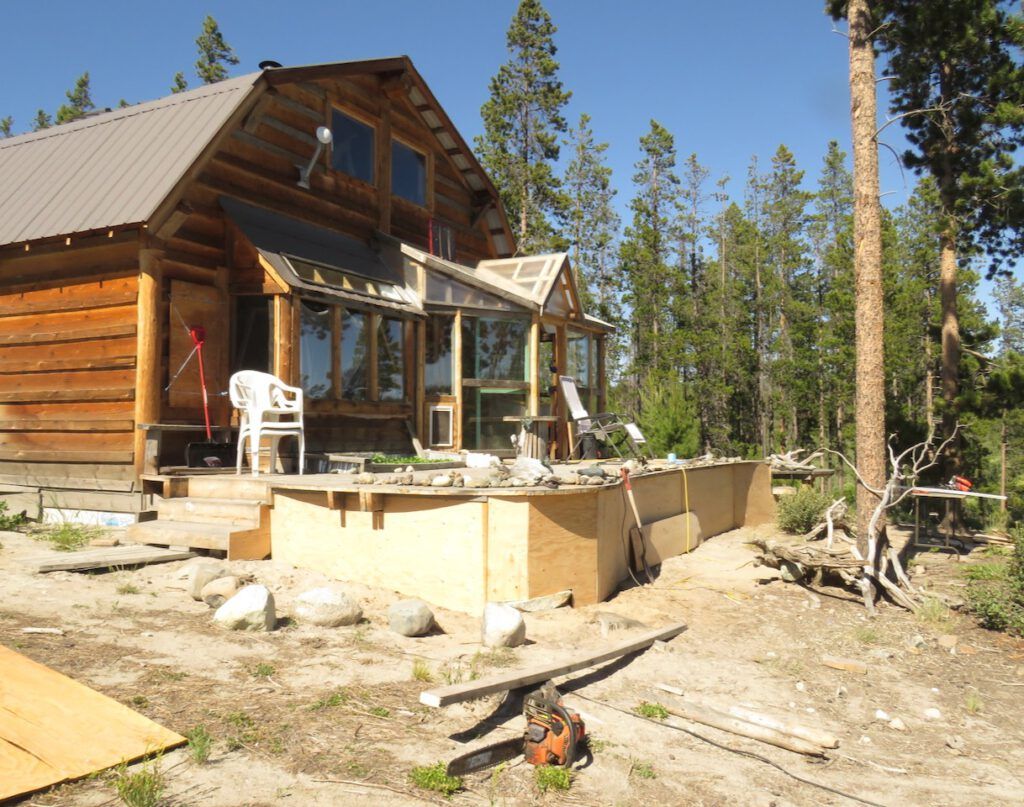 A couple of days later, two New Zealanders arrived in their own van.  They were also skilled with tools and very hard workers.  Hussien (our new Canadian from Sudan) has proved to be an immensely hard worker as well, and he is very strong. 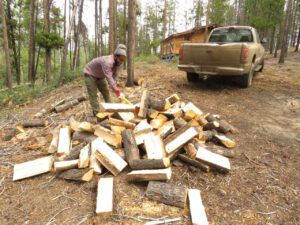 So I fetched him again and had all five of them work on my “fireguards.”  Old roads pretty much surround my 40 acres, and the idea is to clear low branches and dead wood for an area on either side of the roads in the hope that a fire coming this way will be stopped.  It won’t halt a crowning fire, but it would be very effective give against a creeping one.

It was terribly buggy.  Local people were saying it was the worst bug year ever, but I remember terrible ones in the past.  Amazingly, the last 4 years have been relatively bug free and in my opinion this year is more “normal.”  Everyone had to work in bug nets.  (It was also very hot – temperatures often in the 30Cs.) 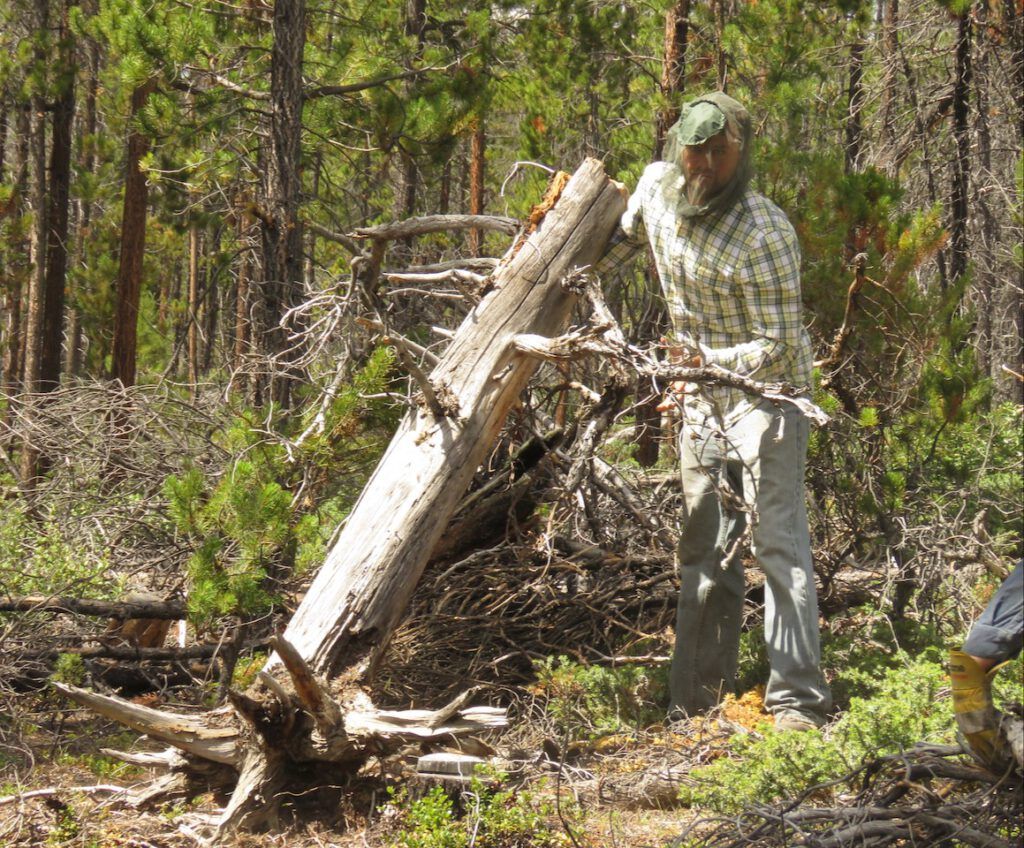 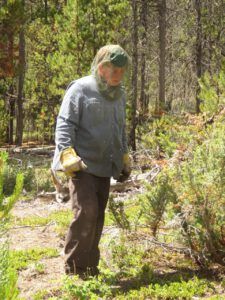 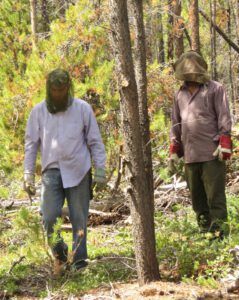 Between them and the next volunteers, they did an incredible job.   Here is “before”. 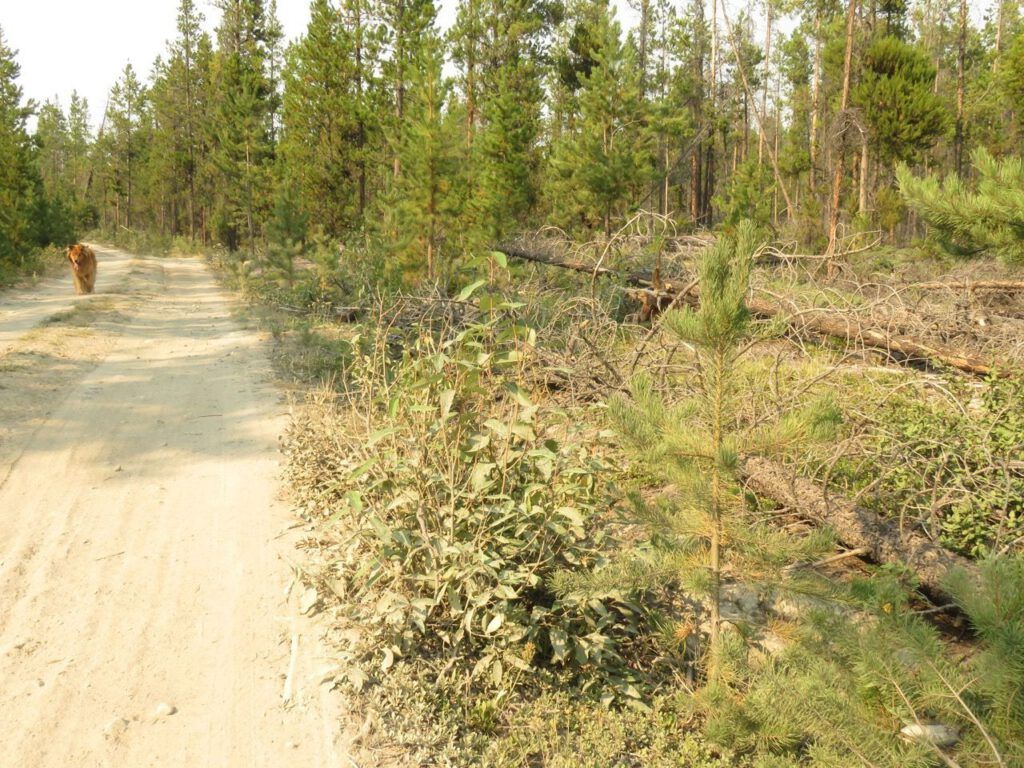 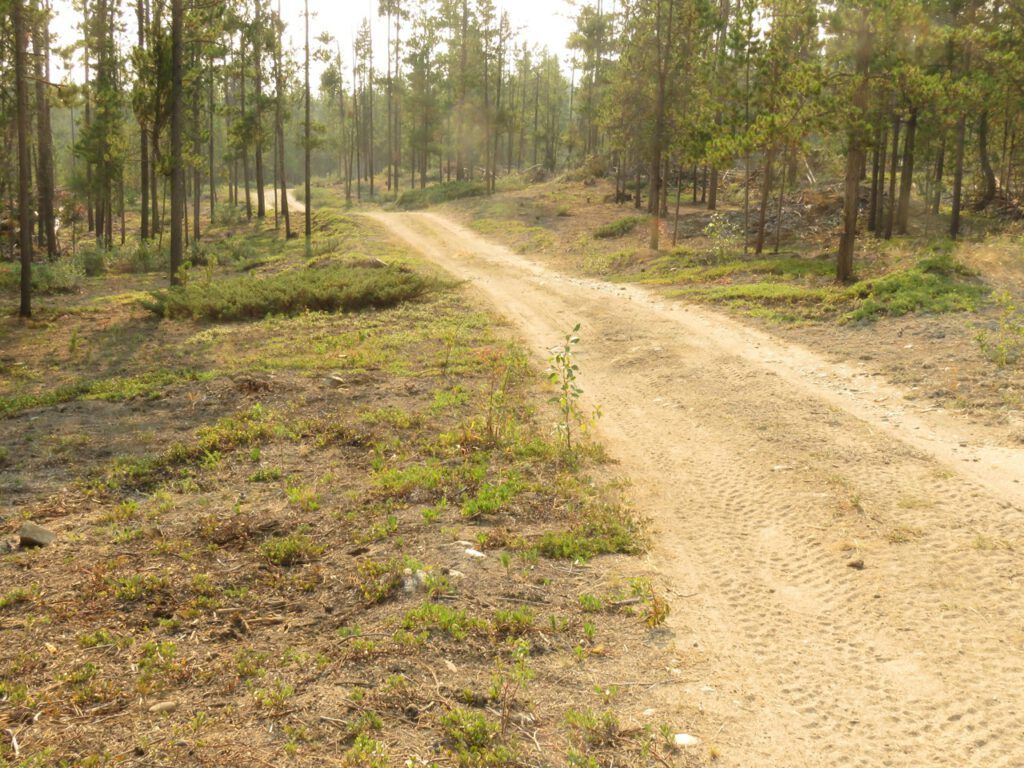 At one point, Anna Marie said she didn’t really like throwing wood around – and would I mind if she cleaned my house?  What an offer!

Before Marien and Anna Marie came, Hussien and I built the side walls for an atv shed.  Here is Hussien peeling logs.  He likes carpentry and in my opinion he would be very good at it. 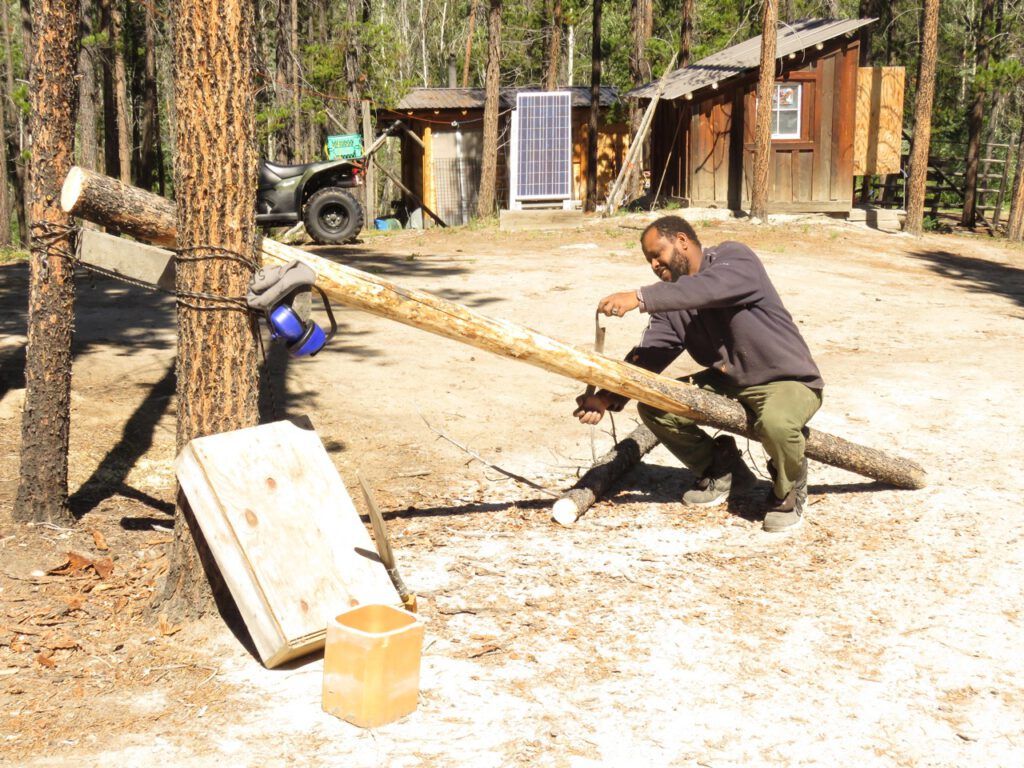 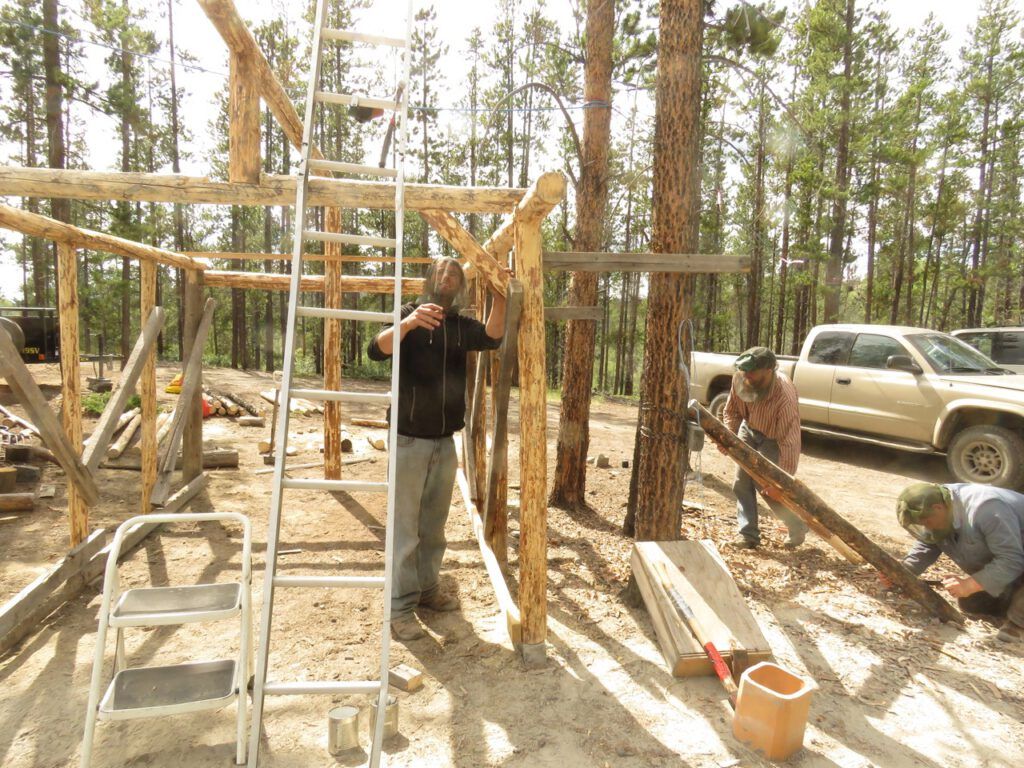 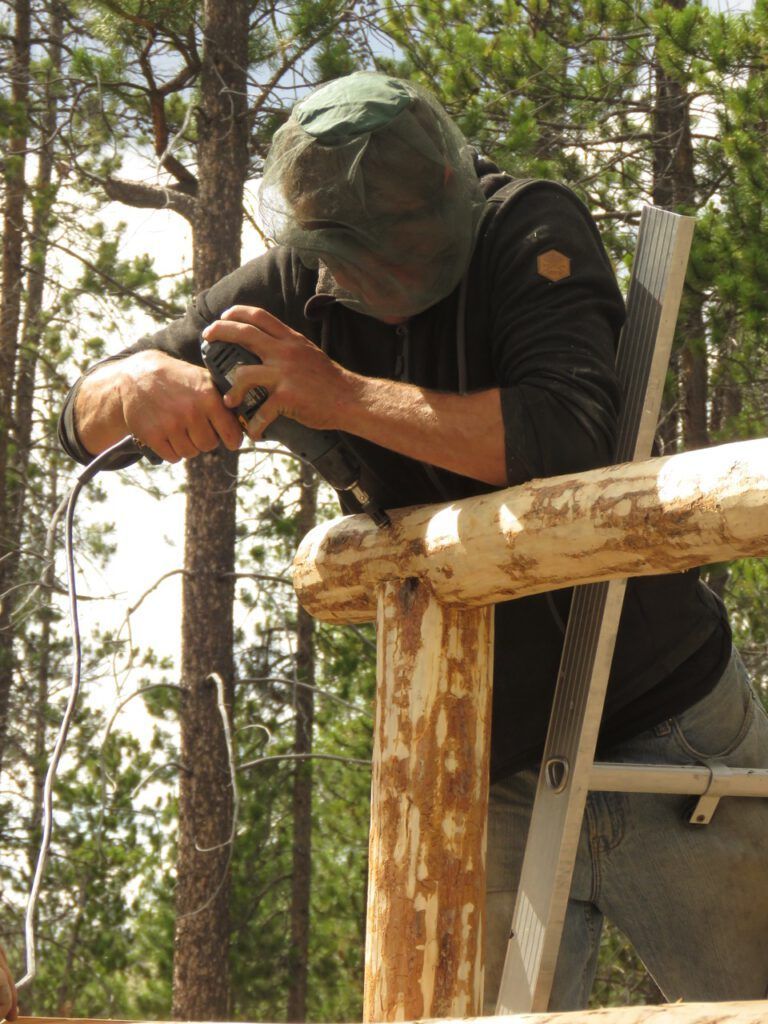 The high temperatures were unremitting – the hottest I recorded was 34C 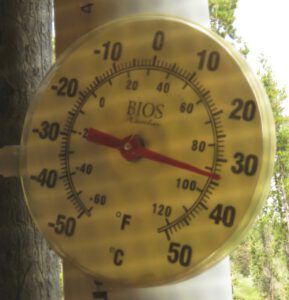 The sun was not shining all the time, though.  It was quite humid (for this part of the world) and we had many thunderstorms, some of which rumbled around for hours.  Unbelievably, few fires were started, only down in the Kelowna area did it become serious right away.  Not long after Marien and Anna Marie arrived, I went to a meeting in Tatla Lake, and on the way back I saw smoke.  At first it looked as if it was right over my place, but then I could see it was much further back. 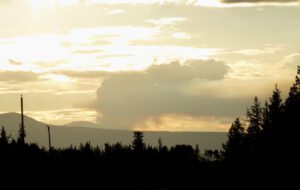 I picked up the volunteers and we drove to a lookout point to watch the sun go down. 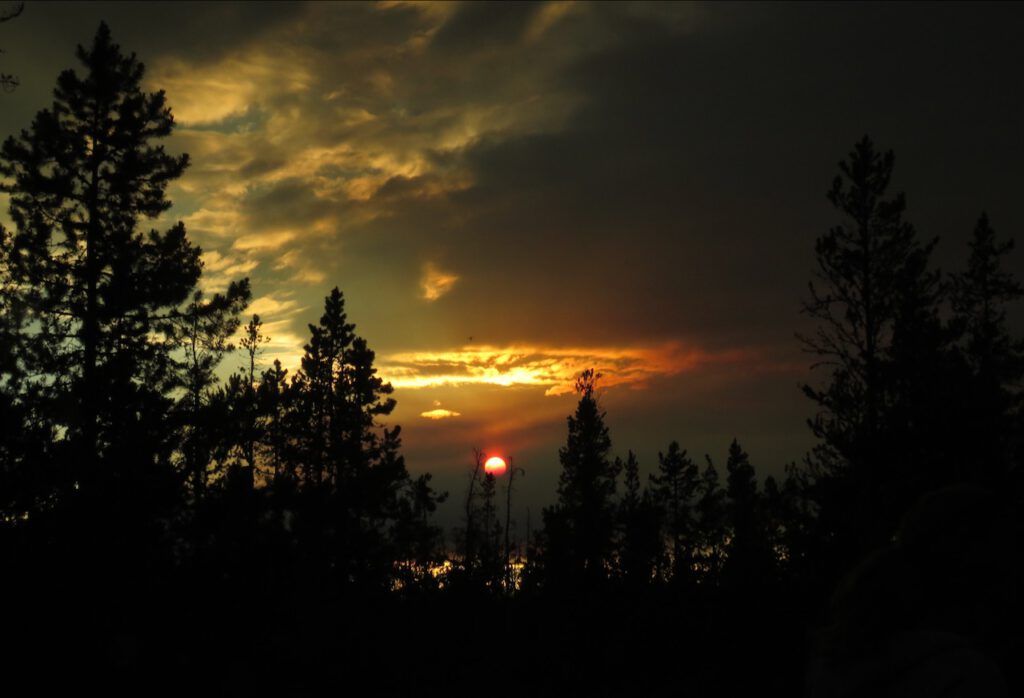 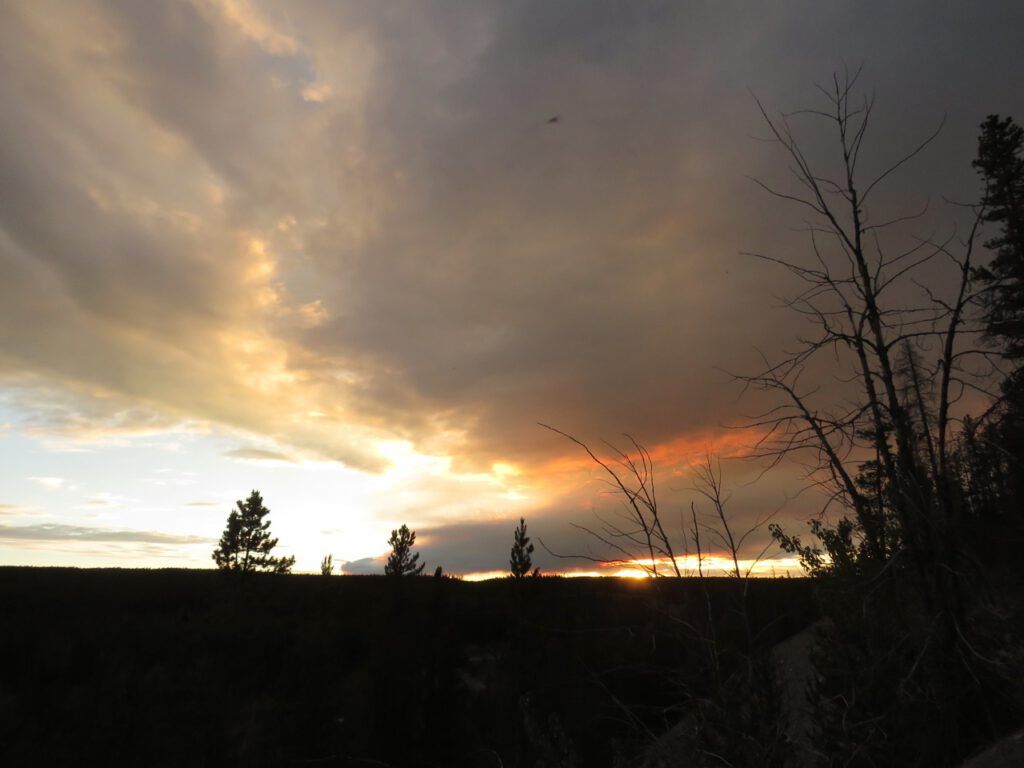 The light still caught the mountains near Tatla Lake and a shower of rain produced a dramatic rainbow.  (The hills it is sitting on are the burned ridges of last year’s  Kleena Kleene fire, hence the weird colour.) 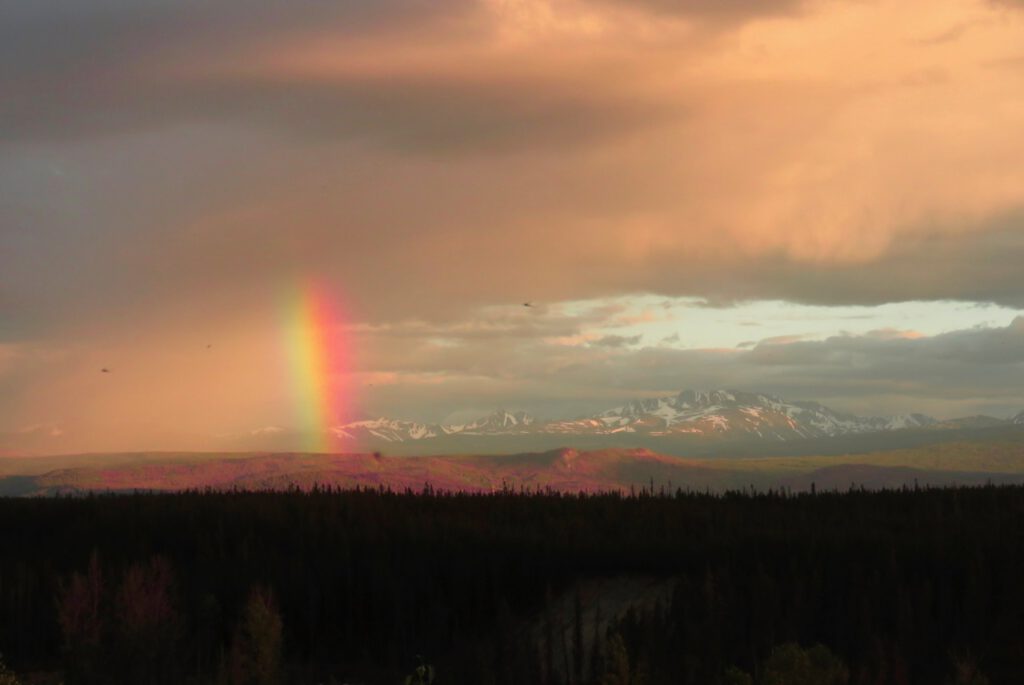 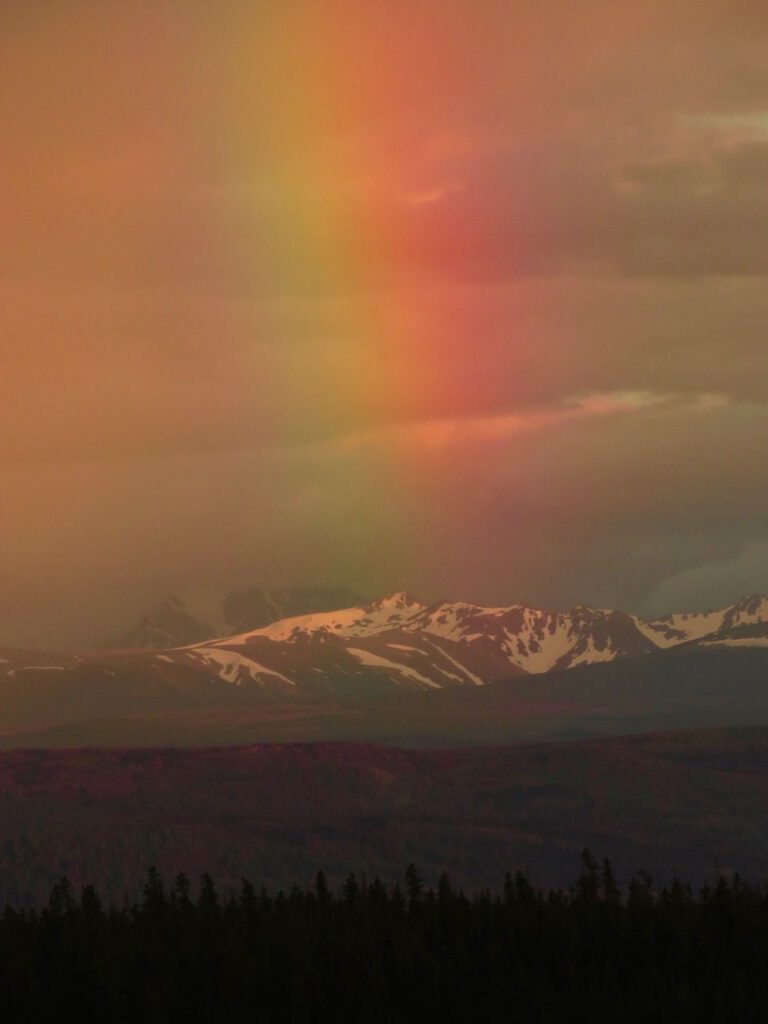 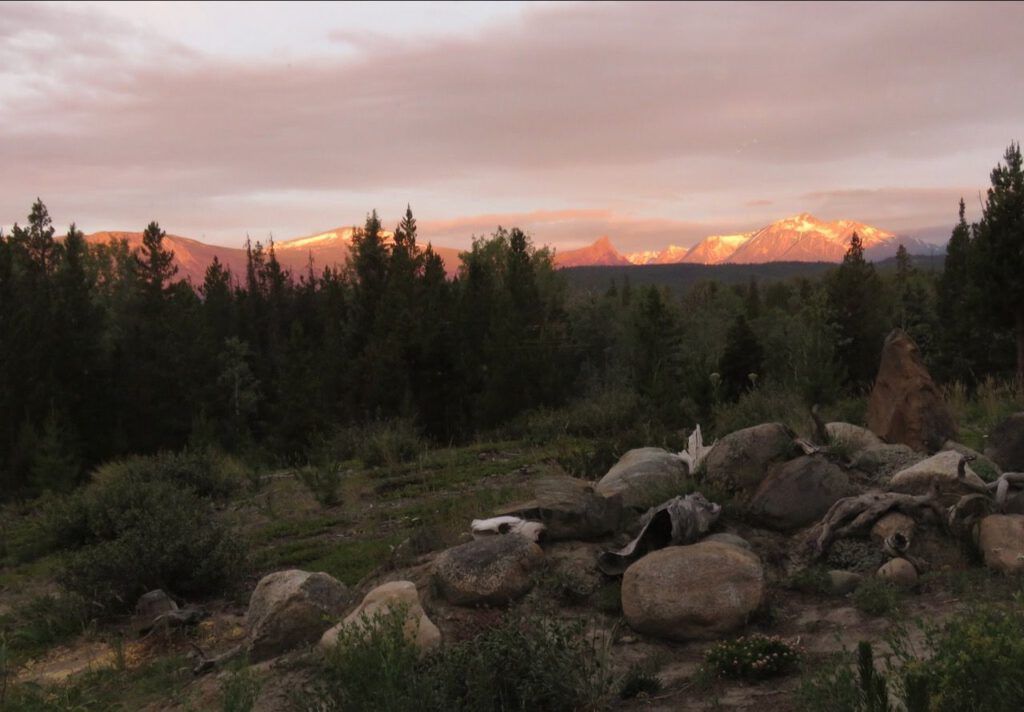 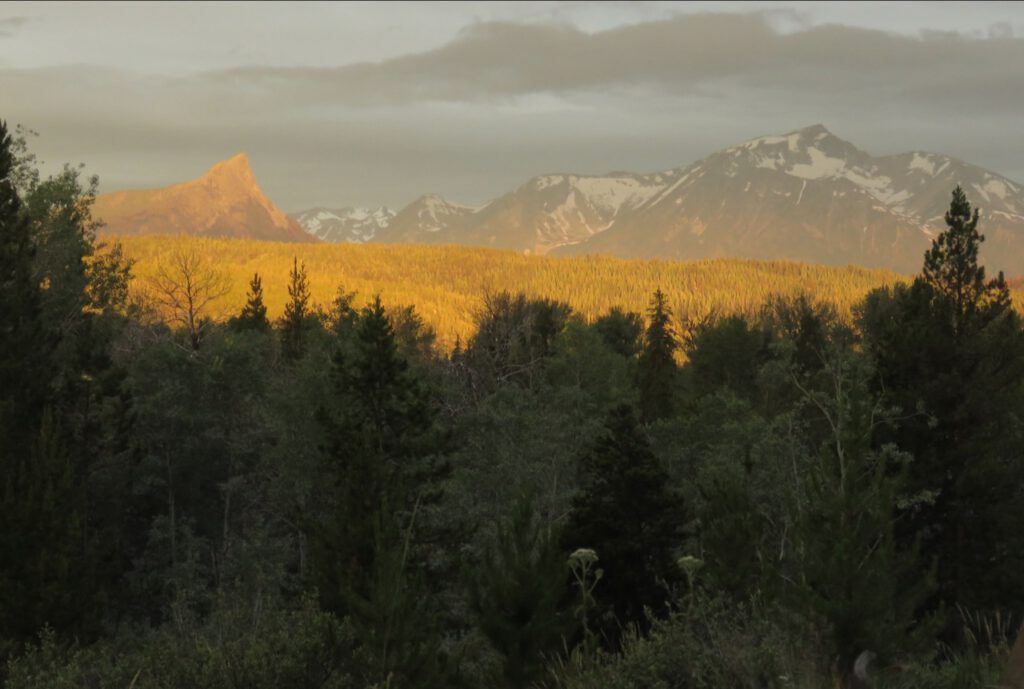 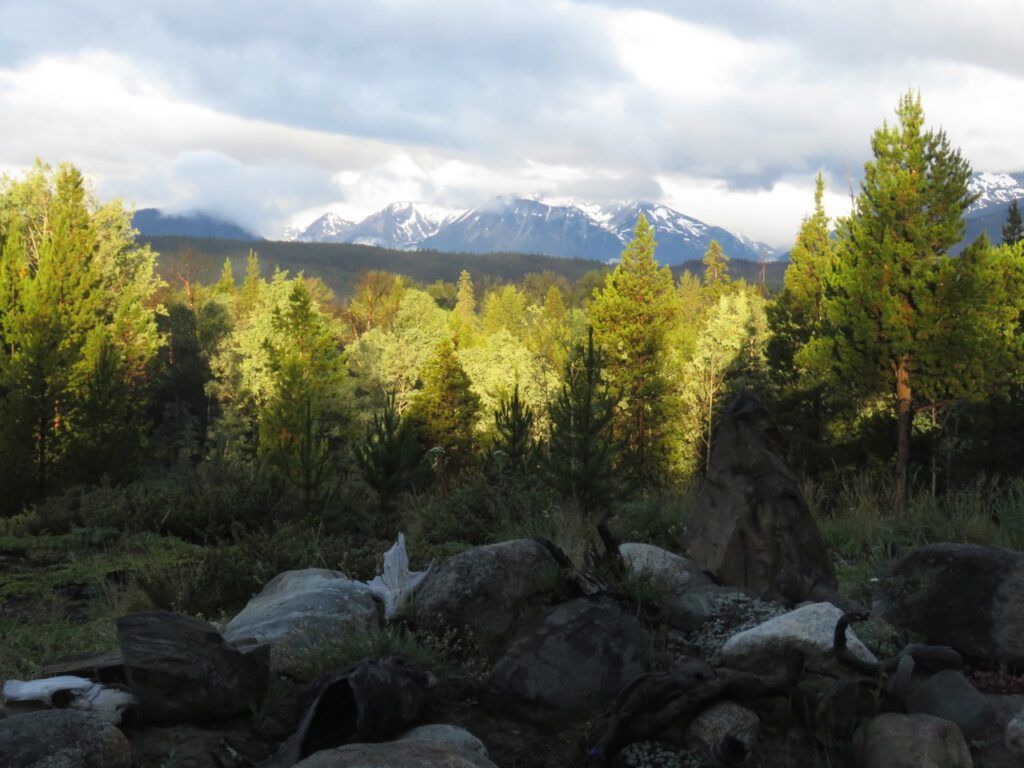 The hummingbirds were crazy this year.  In the past I’ve filled the feeder about once a day – now they were going through one and half feeders a day.  (I know other people have more, but this was exceptional for here.) 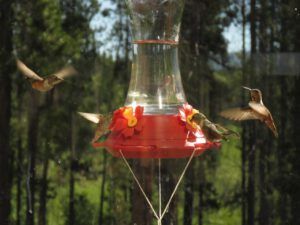 One early morning (on my way to pick up Hussien for another days’ work) I was allowing Harry to run behind the van to the highway (Badger is too old for this now), and I heard him barking periodically.  There are often range cows on the road and he barks at those, so I was quite surprised to see a coyote following him. 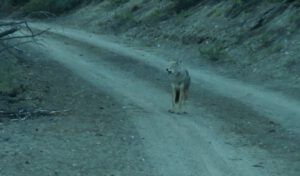 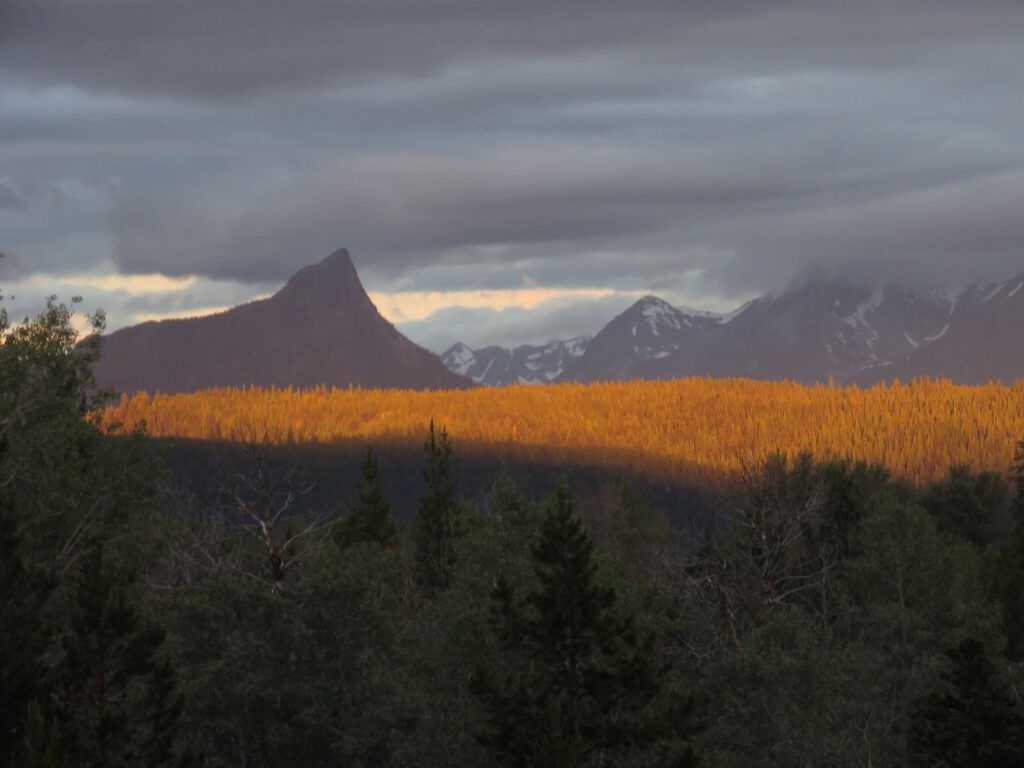 And Nogwon (again, the burned slopes enhance the red cast.) 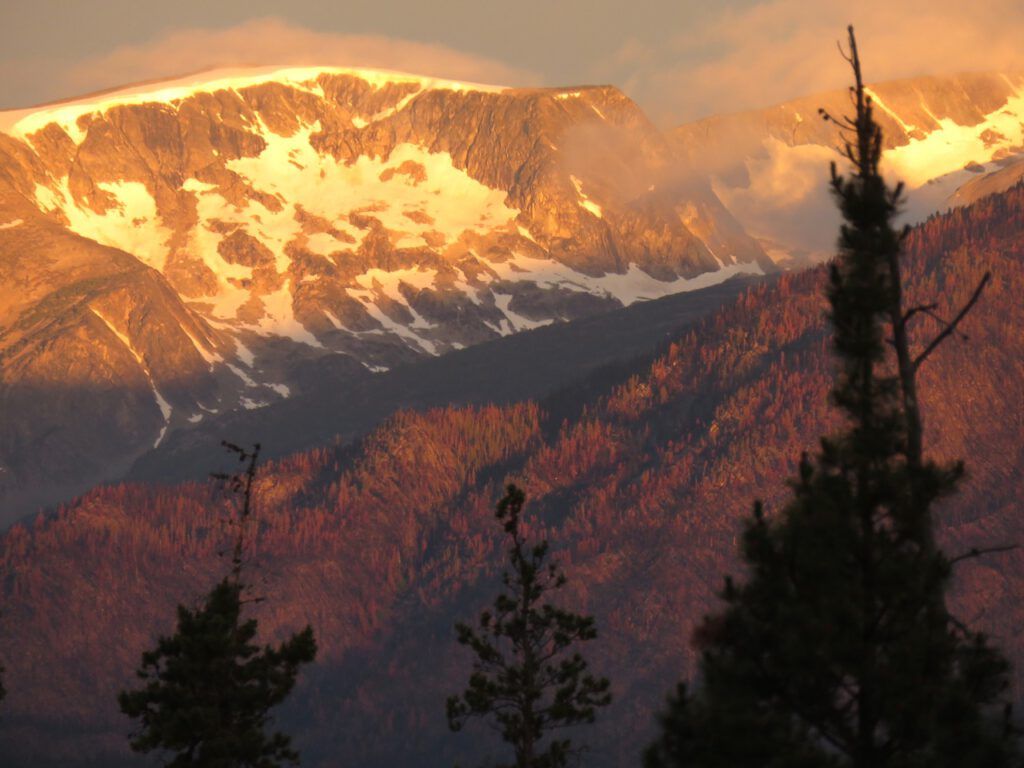 But it was after that when the smoke started to creep in.  The fire we had seen before was near Mt Monarch, the mountain visible from my old place Nuk Tessli.  It was now joined by another, bigger fire – these are south west of my place and the dominant wind comes from there….. 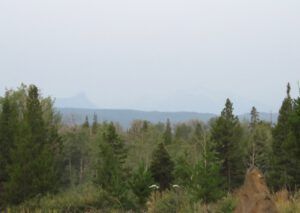 On my way to town to take Marien and Anna Marie to the bus, we had a smoky sunrise. 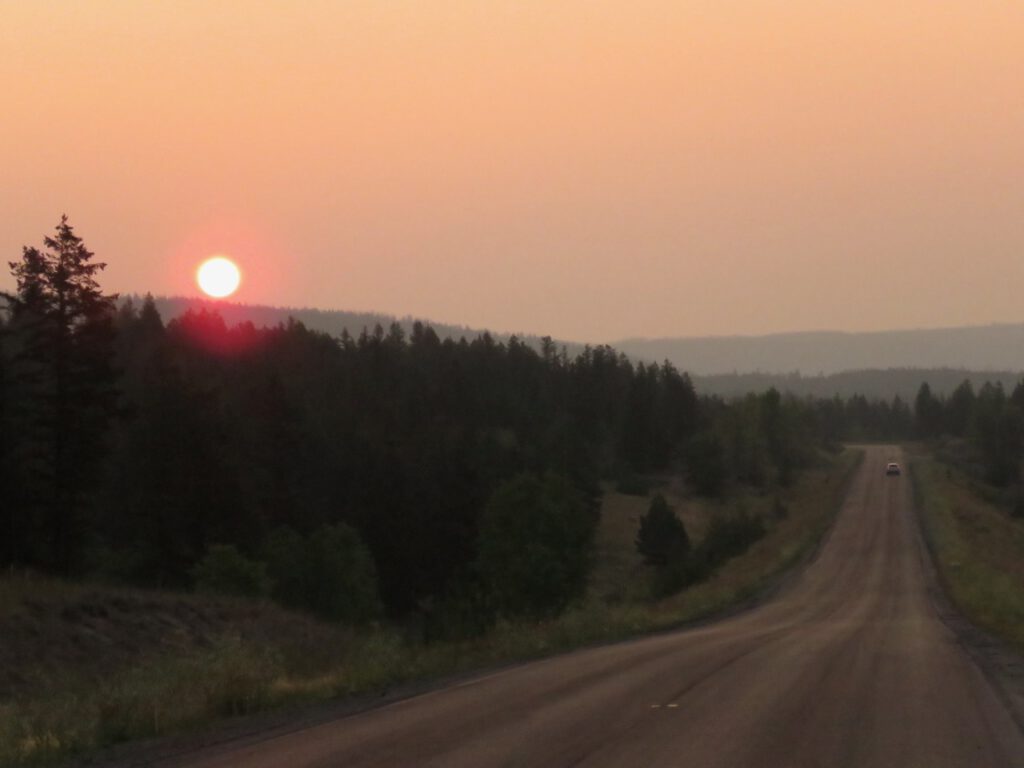 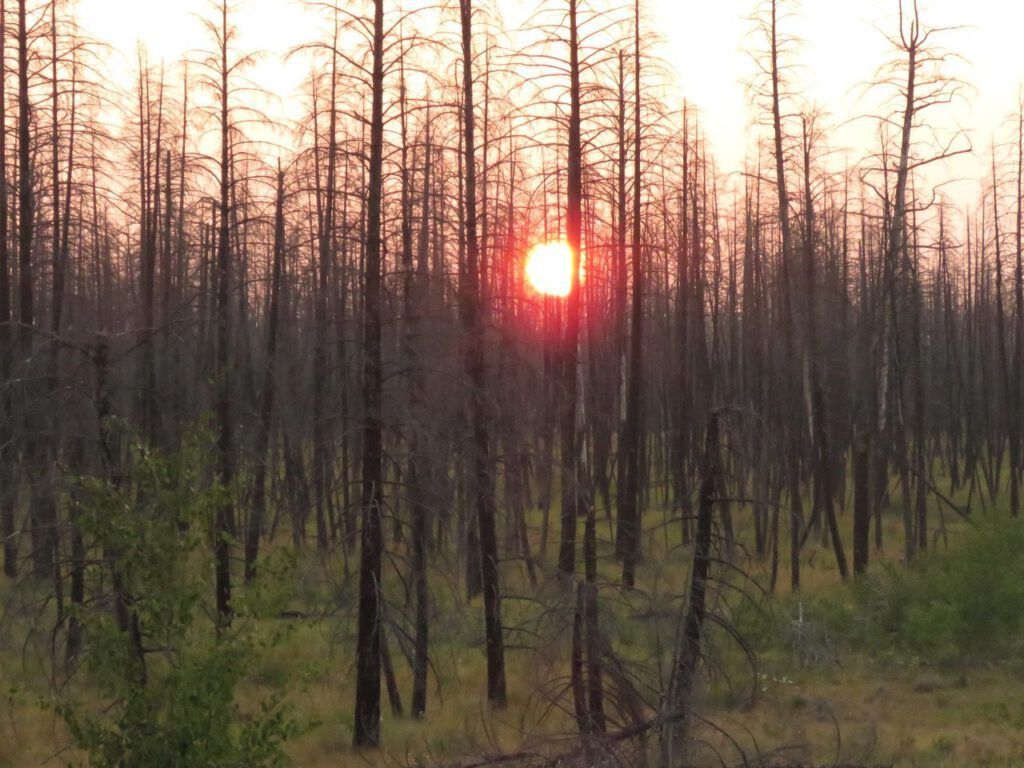