Jonas’s time with me was ending and I took him to Bella Coola.  First we helped friends take their boat out of the water.

The weather had deteriorated again. 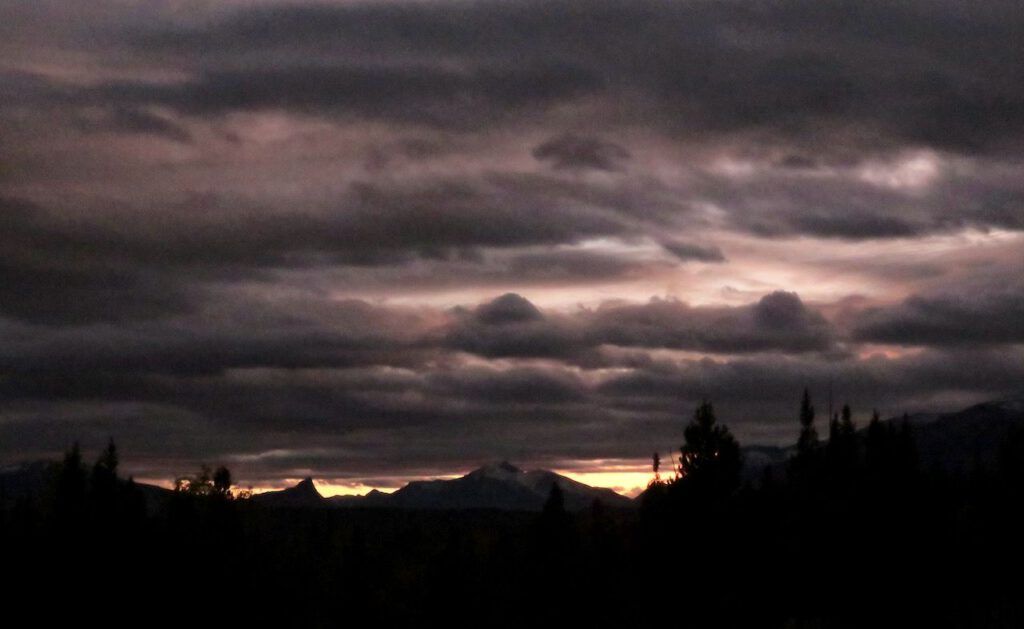 The mountains around The Hill were swathed in cloud.  You can see the notch where the road goes. 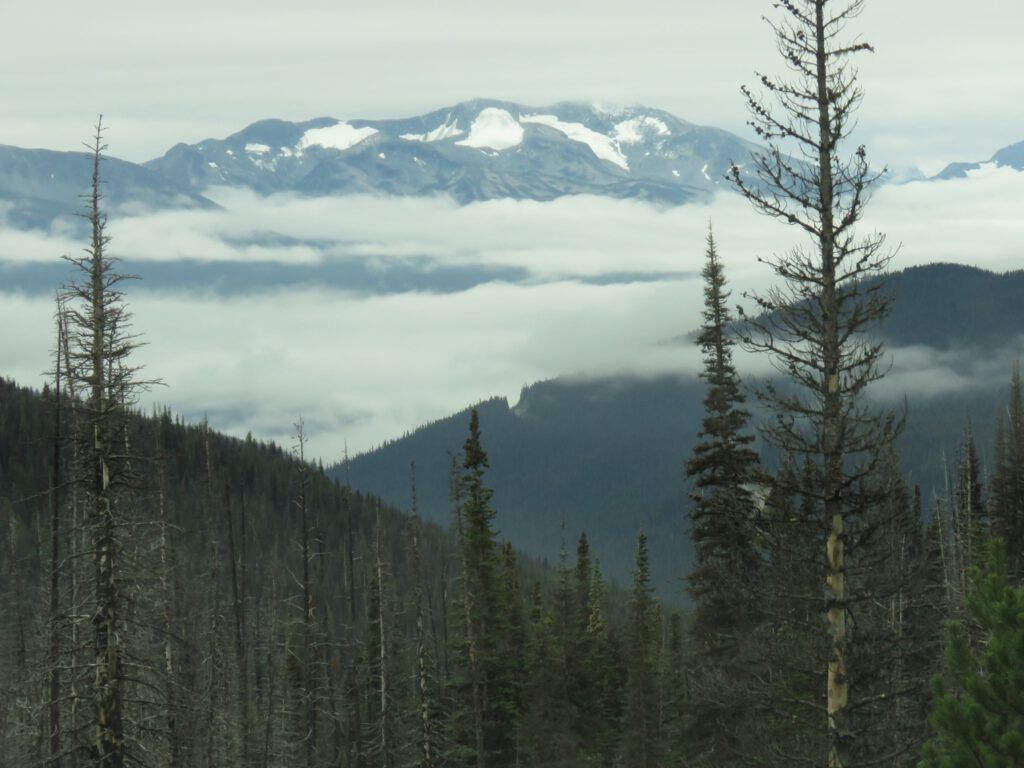 Down at the harbour, it was actually quite a nice day. 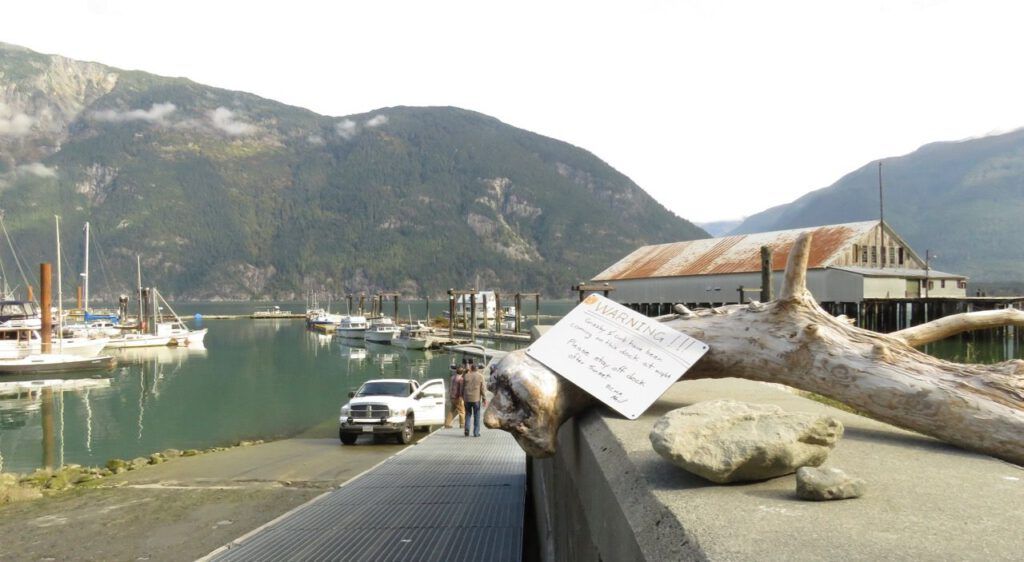 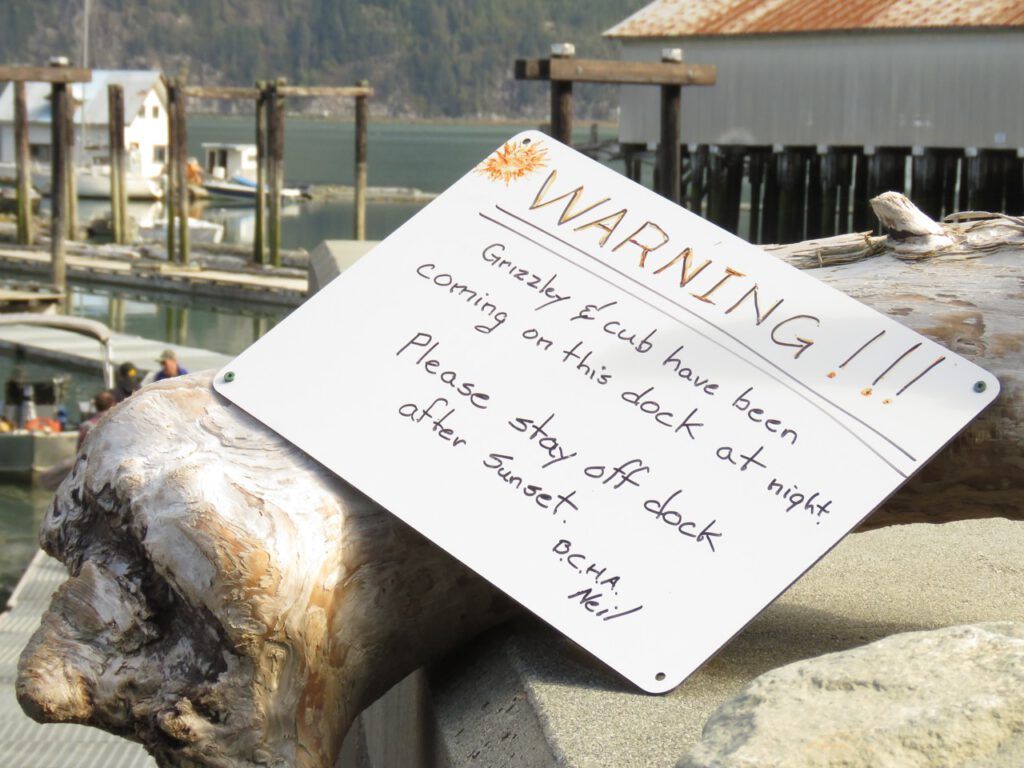 My friends have owned Skalu for a number of years but are not getting any younger so regretfully decided they would have to part with their beloved craft. 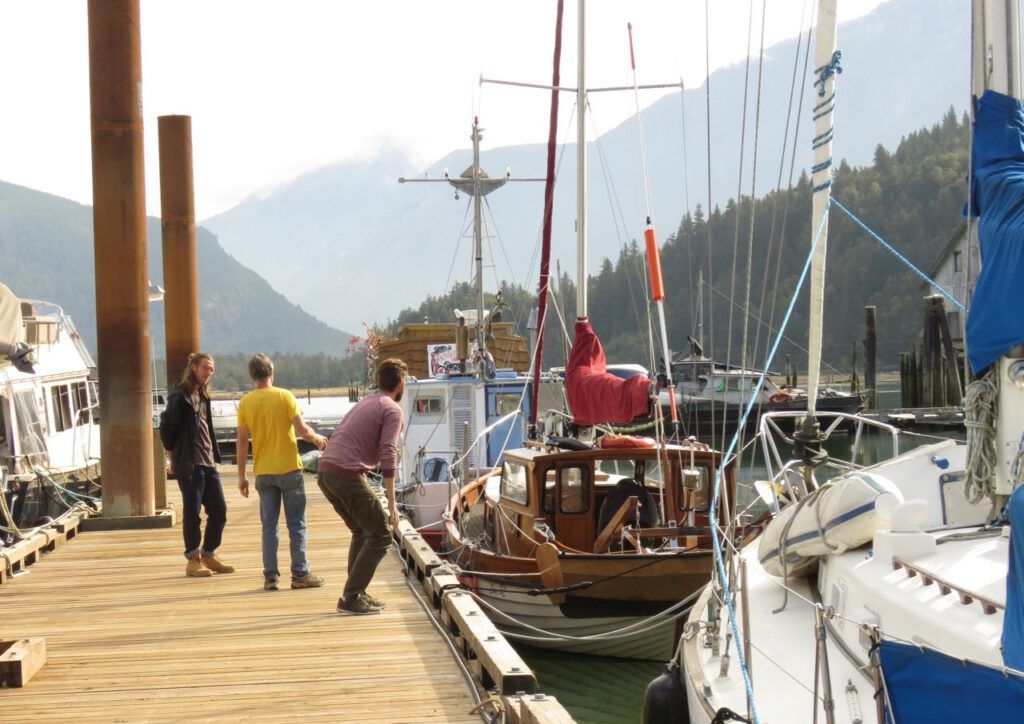 Dennis, one of the owners, is not a short man.  But Jonas, on the right, is very tall – as is the young man on his left, also tall, who I just picked up – he will be my volunteer for the next month.  He has been on two different farms down the Valley.

They had to move Skalu the short distance to the boat launch. 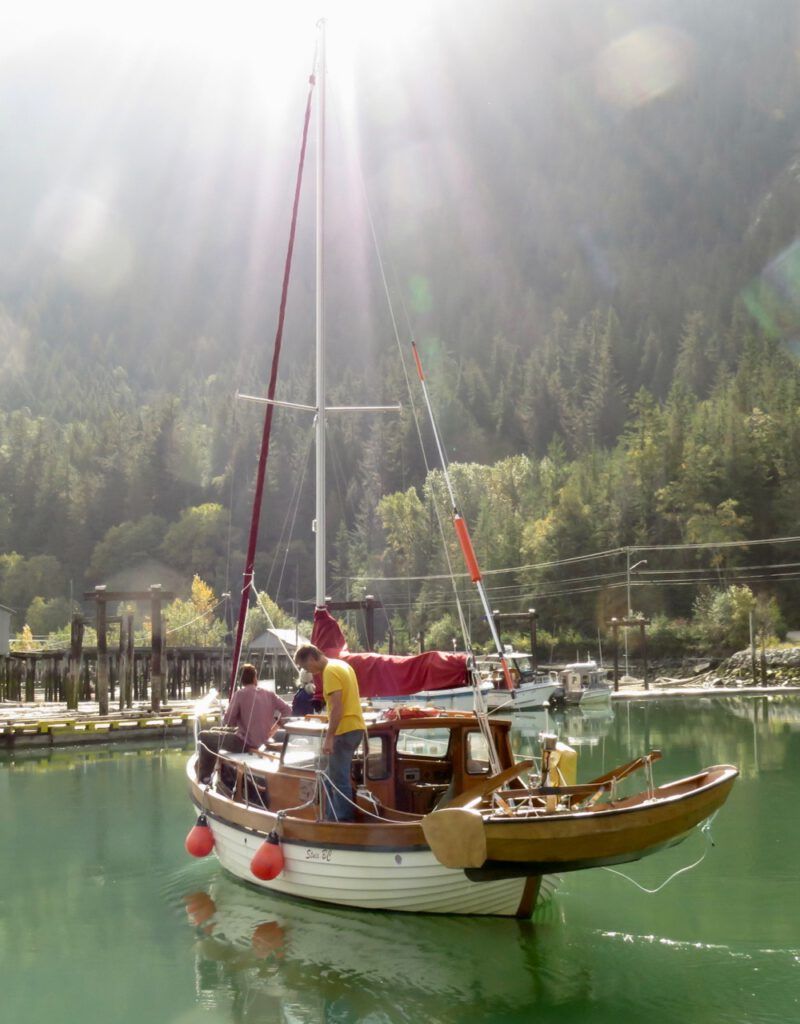 Behind in the next picture is the old net loft. 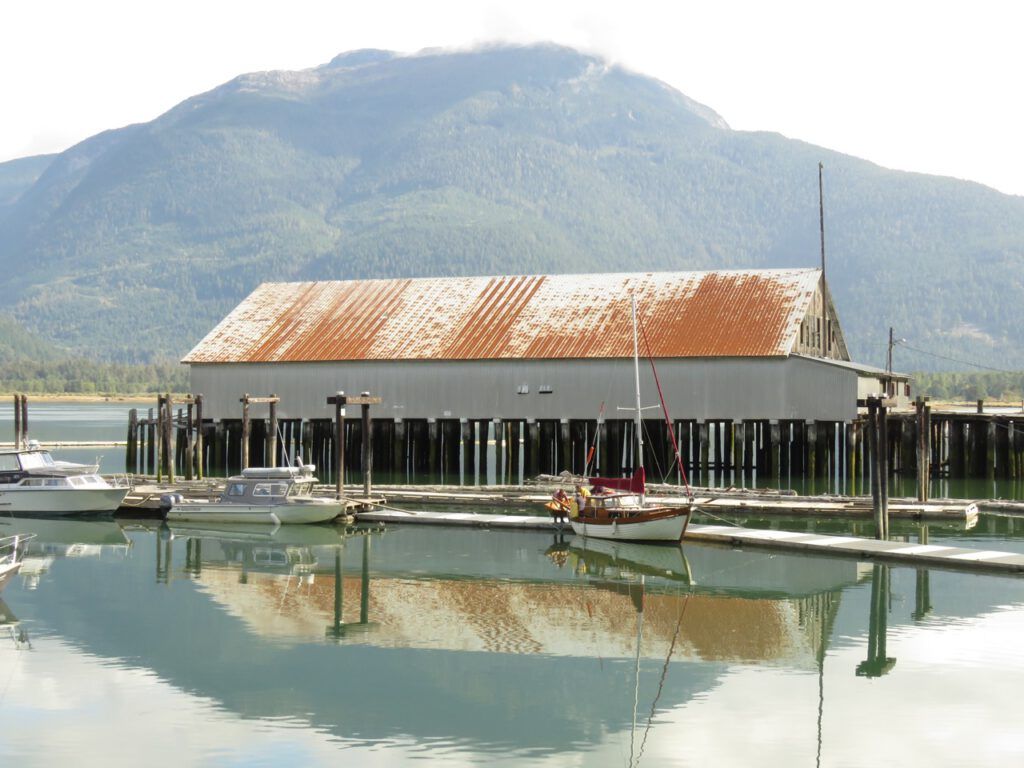 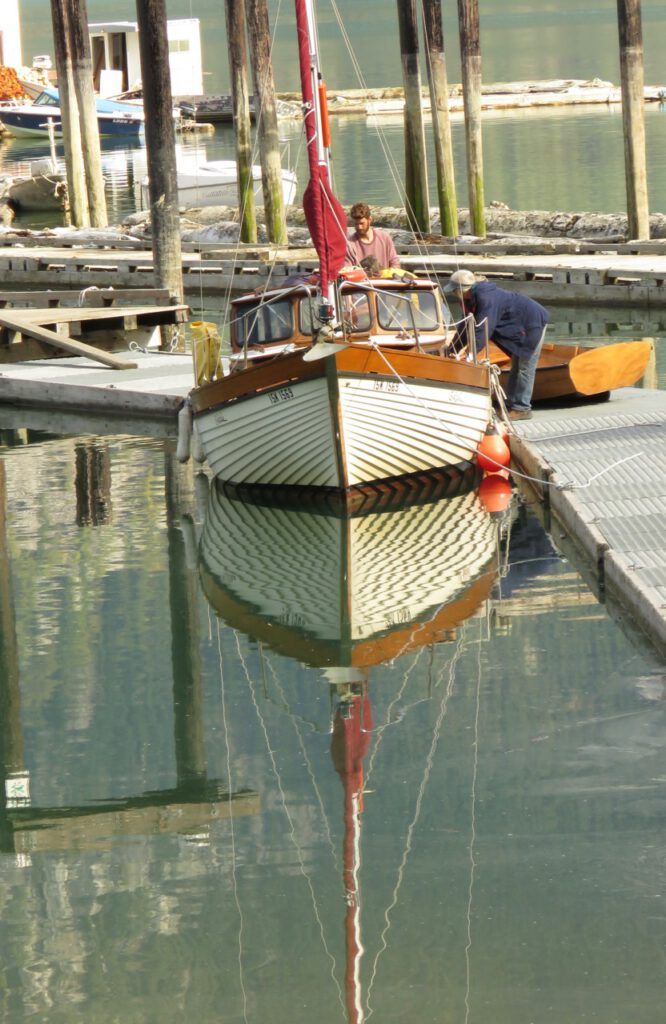 I loved the pattern the hull made in the water. 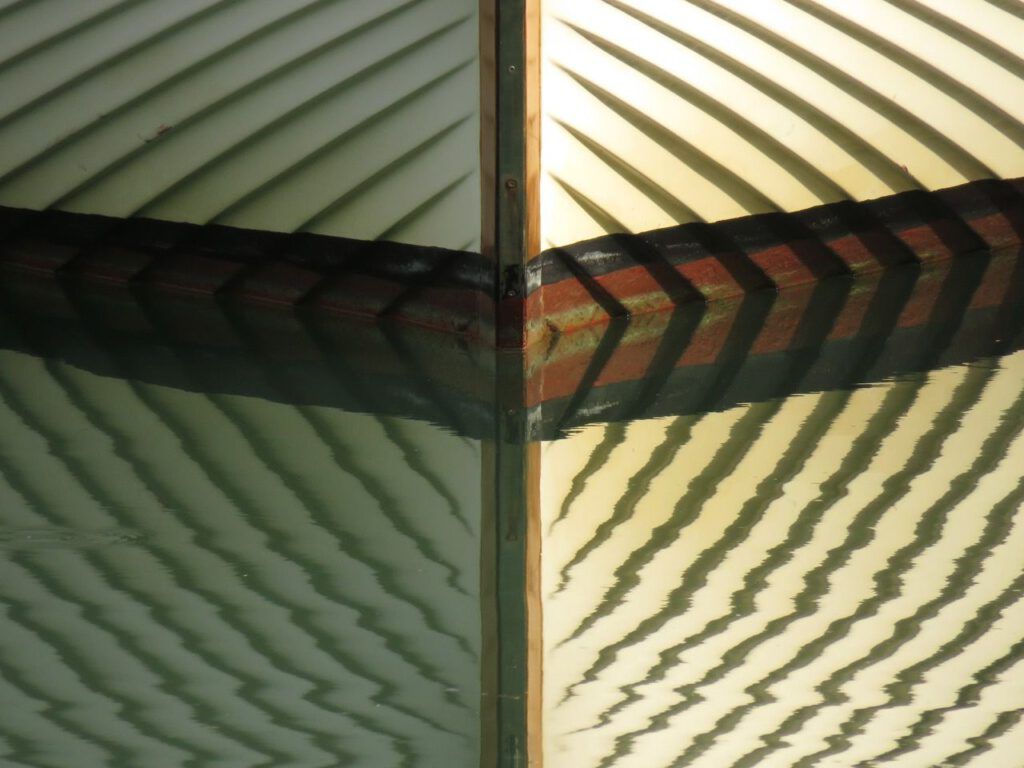 Katie backed a borrowed truck and trailer into the water.  Skalu has a big keel and needs to be winched onto the trailer.  Friedi, my new volunteer, making himself useful already. 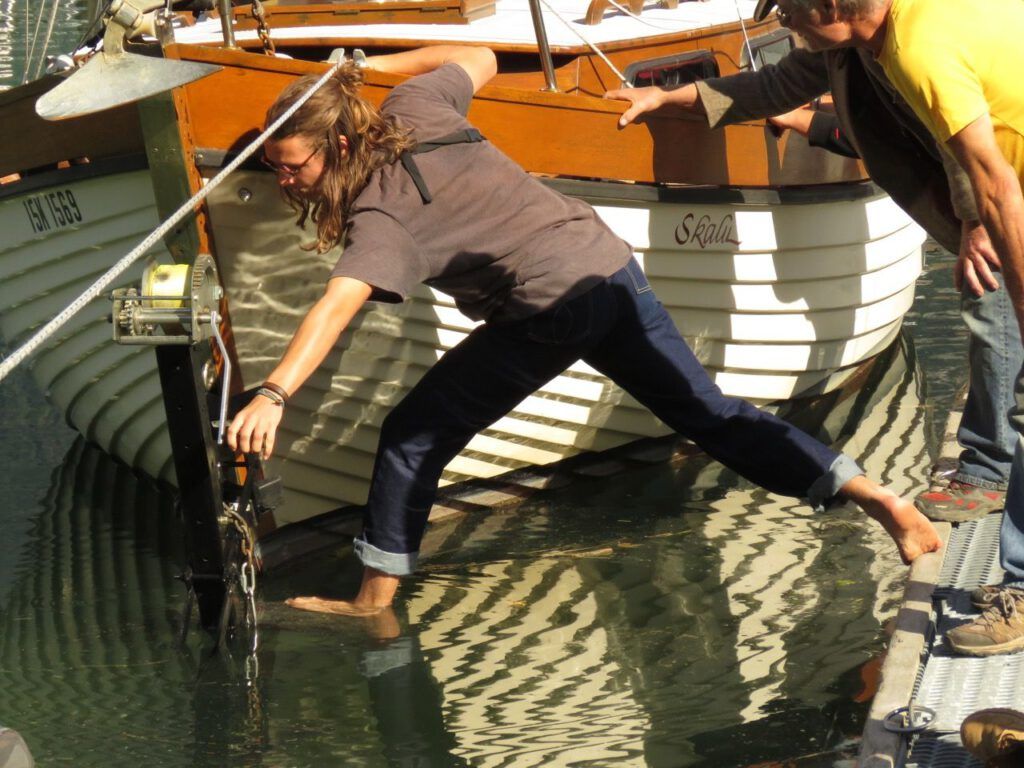 Once out, preparations had to be made to lower the mast. 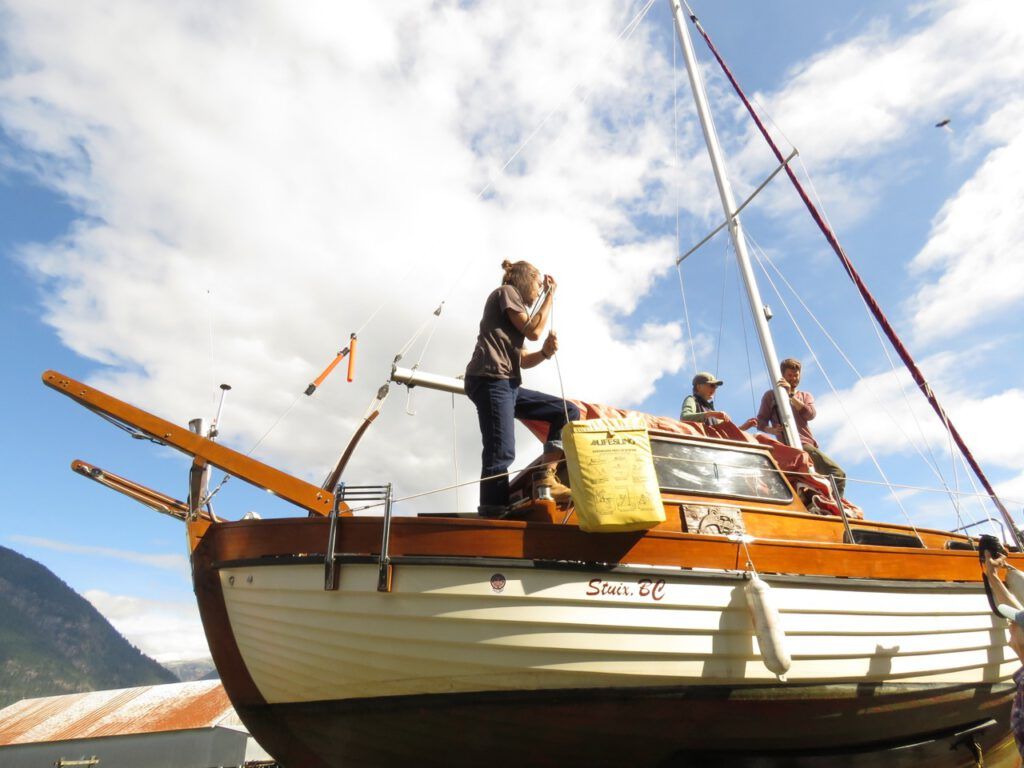 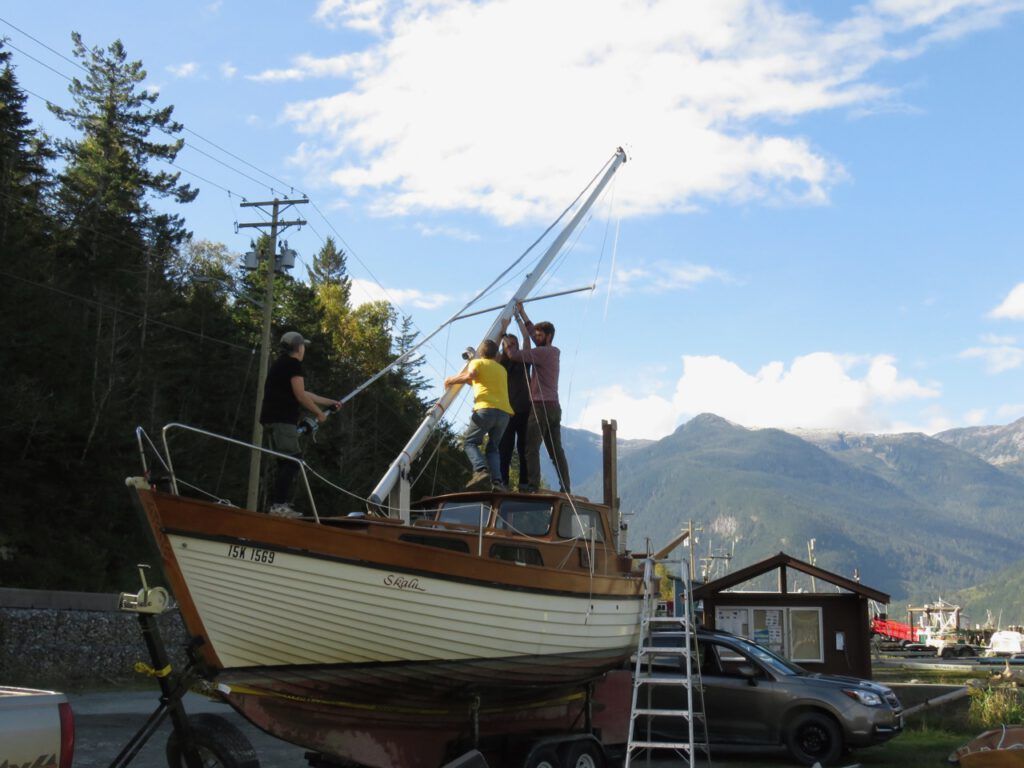 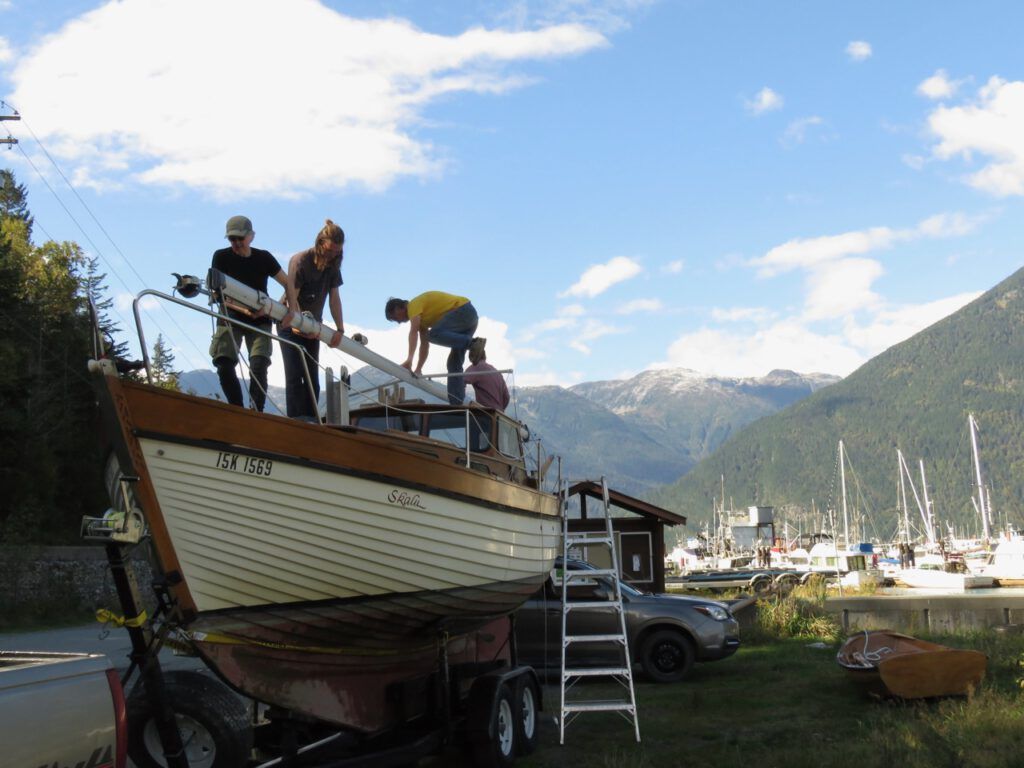 Next, we visited the Big Trees.  Nearby is a rickety old outhouse – I loved the painterly leaves on the roof. 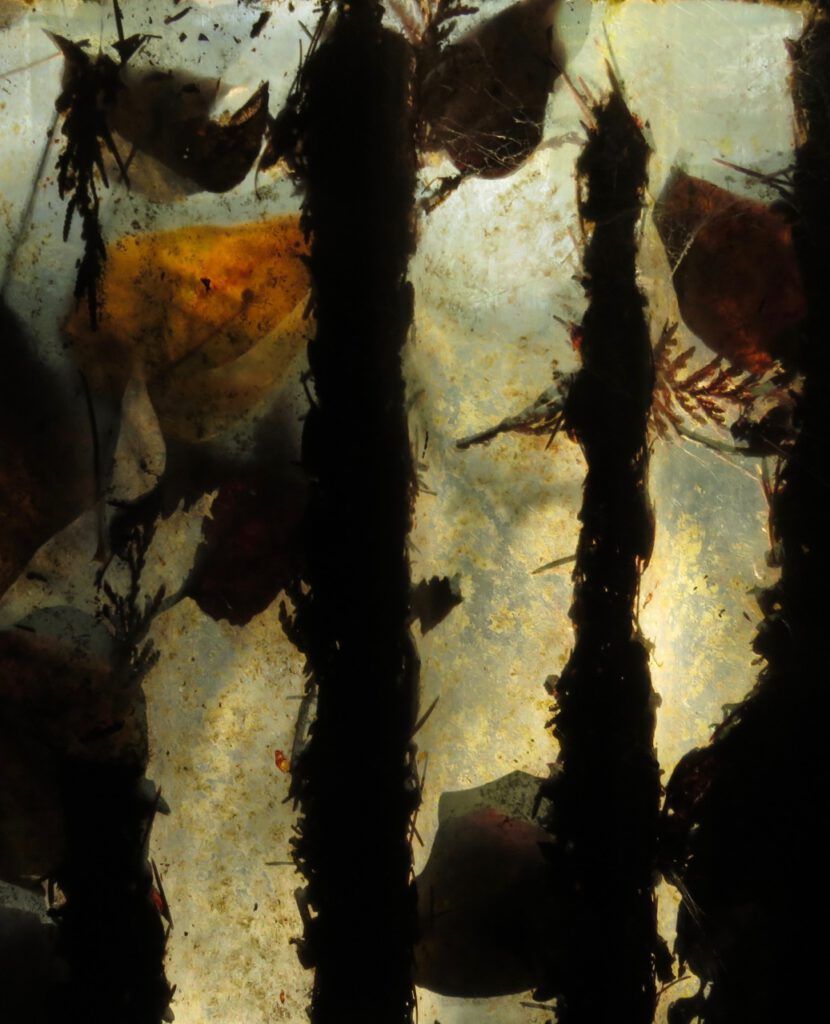 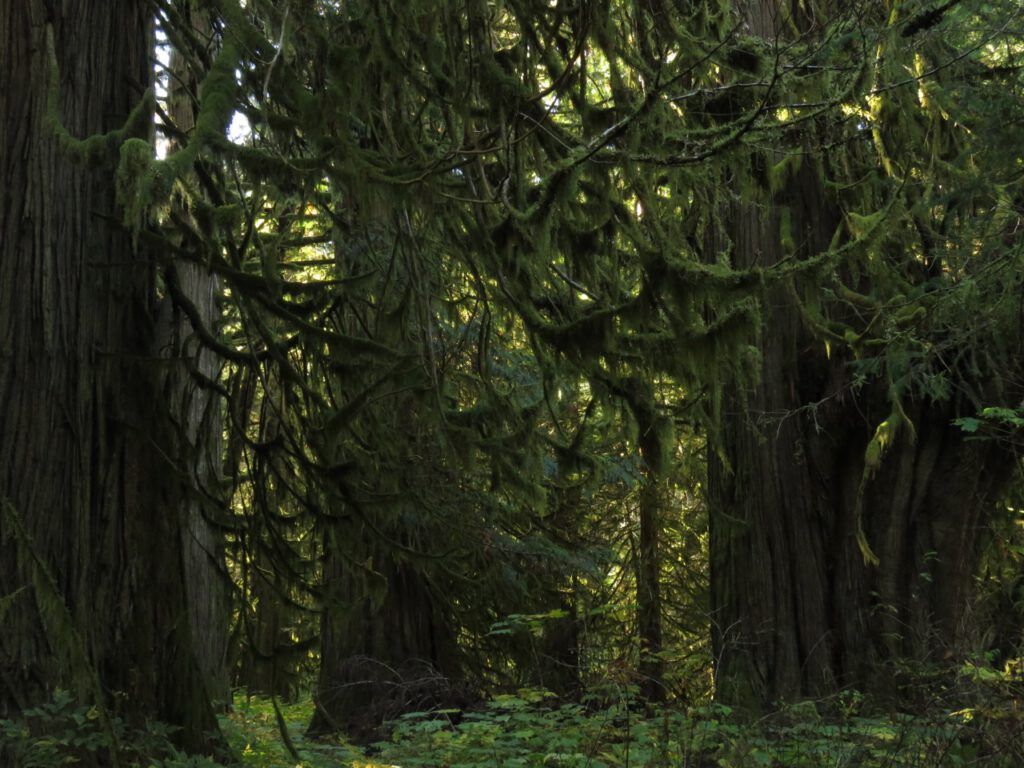 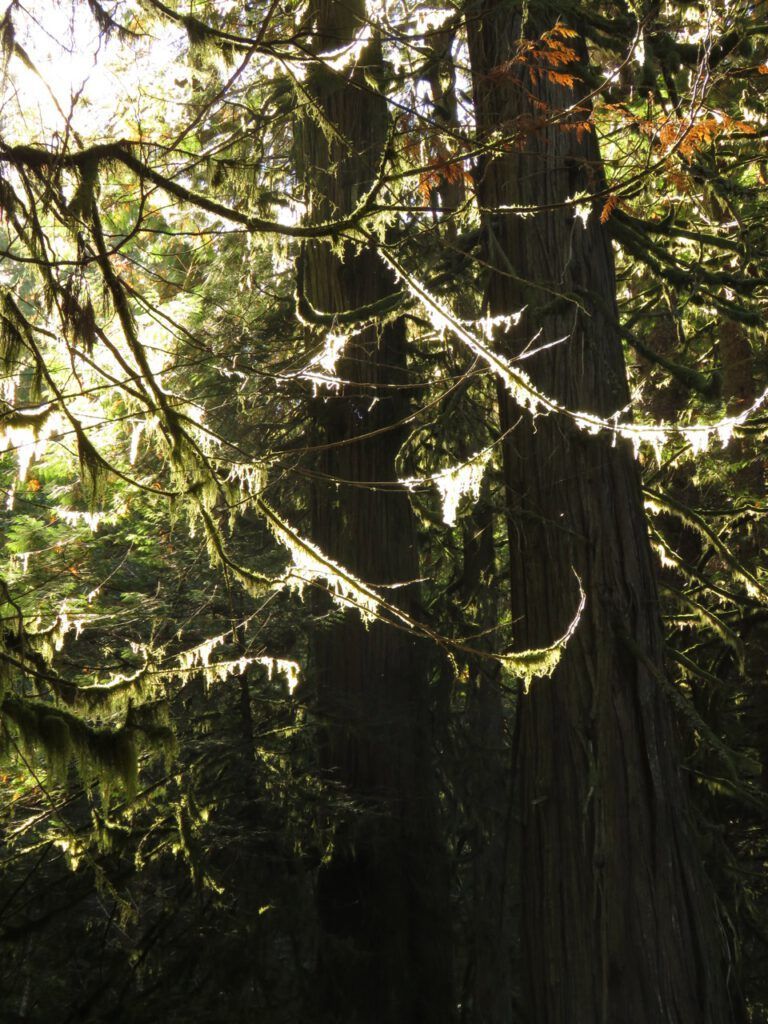 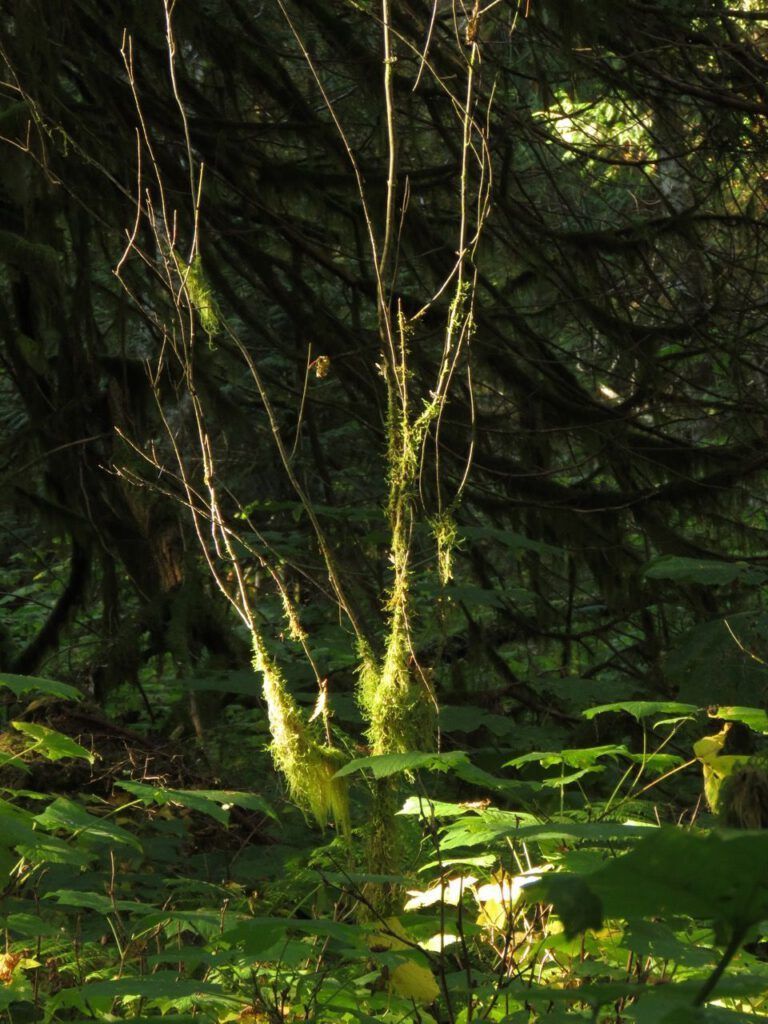 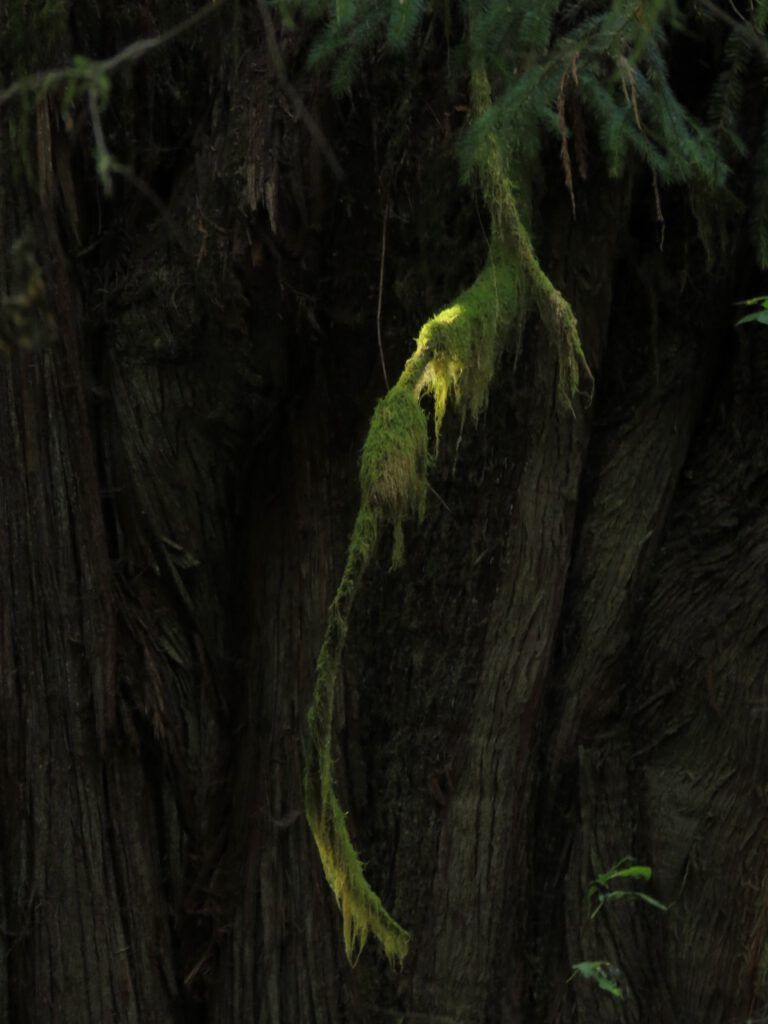 I live in a world of such wonderful contrasts.

I should add here that the ferry service has been abominable for the last 3 years.  This year, all sorts of promises were made, but because even BC ferries could not guarantee service at any time, it was impossible to book on-line.  In the end Jonas booked by phone.  The ferry was indeed due to come on the day he wanted to leave – but it was storm-bound at Bella Bella and could not get in.  So Jonas added a new adventure to his repertoire – he hitch-hiked to Williams Lake.  BC Ferries weird home page will give you an idea of what their communications are like….