Because of the thundery weather, we had to snatch at an opportunity to go up Perkin’s Peak.  This is the view from my house.  We took a chance just a couple of days before Marien and Anna Marie were going to leave. 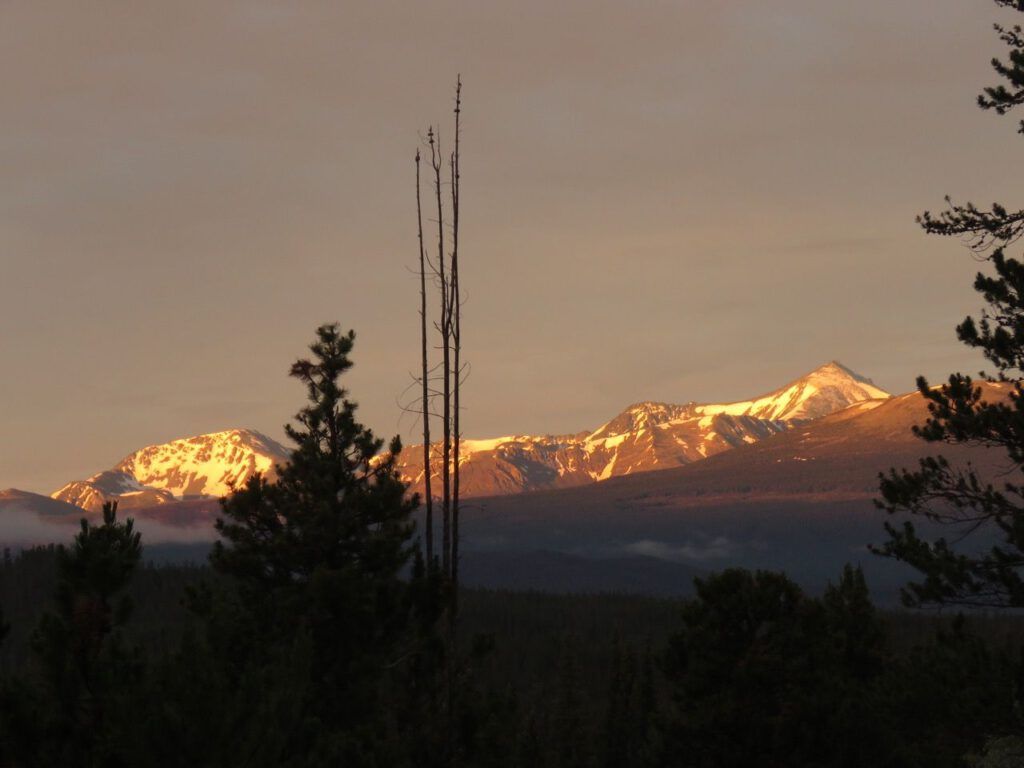 Although it is the highest mountain in the immediate vicinity, being over 9,000′, there is a road above the tree-line, courtesy of a long defunct gold mine.

I was unable to go last year because of the fires, and we drove through much evidence of them. 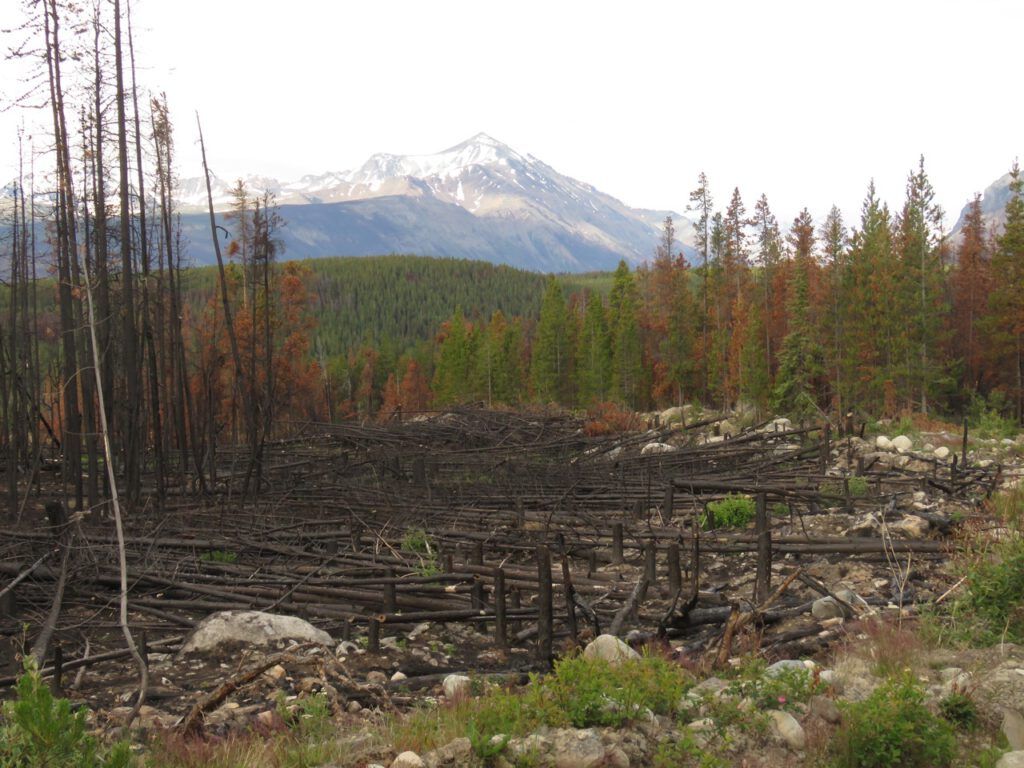 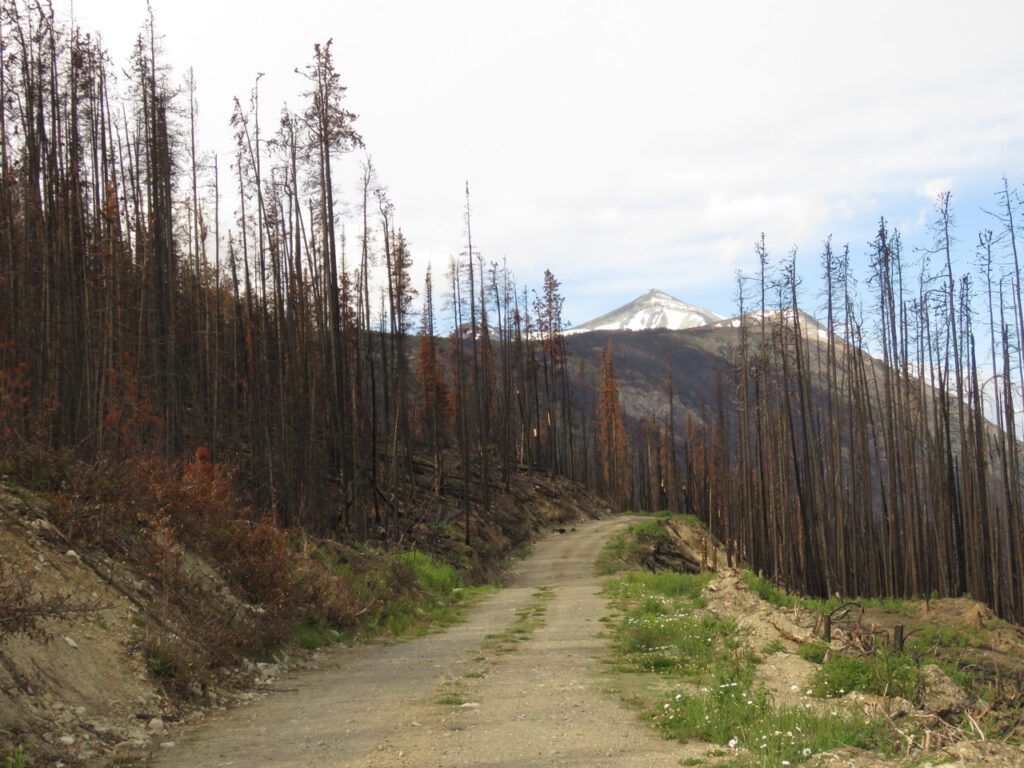 There where also, to my utter amazement, hundreds of people camped there looking for morel mushrooms.  I knew people picked them, and I knew that they flourished after a fire, but I had no idea that it was such big business. 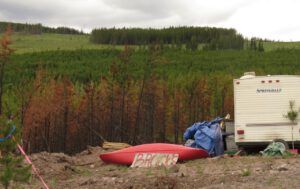 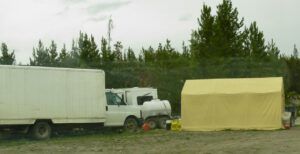 We climbed passed them and the road grew rougher.  I was worried about the truck’s brakes – they seemed too soft.  Logan and Ethan were mechanics (among their many other talents), and they climbed underneath to have a look, pronouncing that there was a bad leak.  It so turned out that I had brake fluid with me but it didn’t solve the problem.  I had a number of tools, but Ethan said he needed a zip tie – and that was one thing I didn’t have.  It was a long, steep way down so we abandoned the truck earlier than I had hoped, and set off on foot. 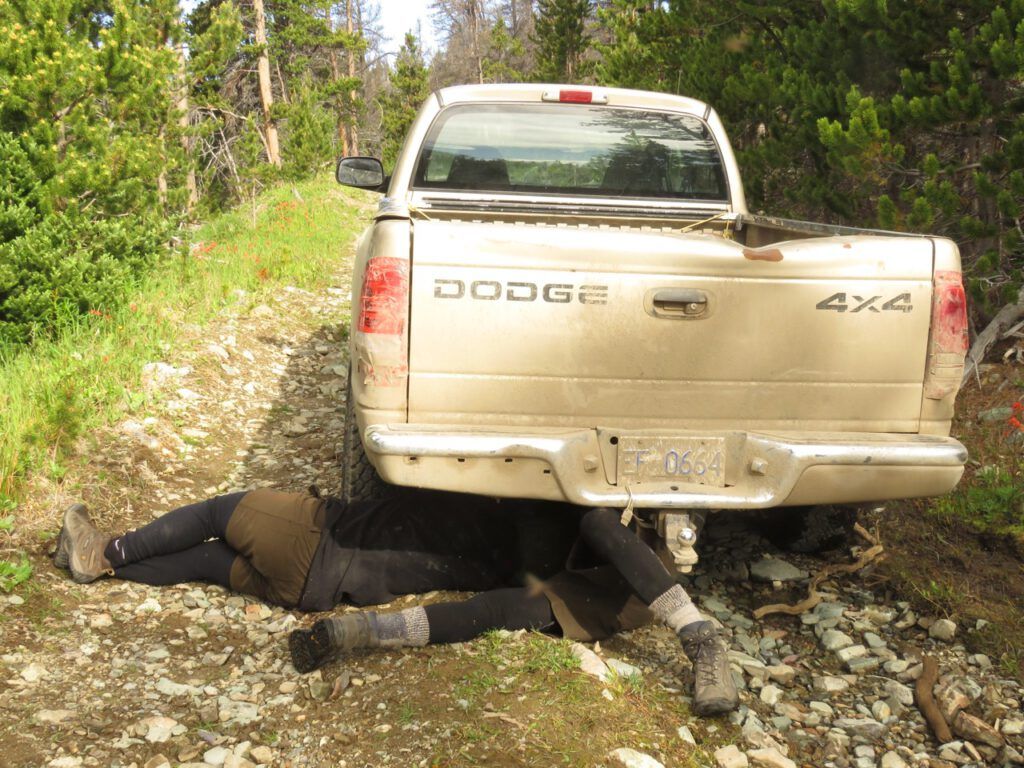 I really can’t do major hiking any more so the rest forged ahead (with a willing Harry – he always goes with the fastest hikers) and I slogged slowly up the road. 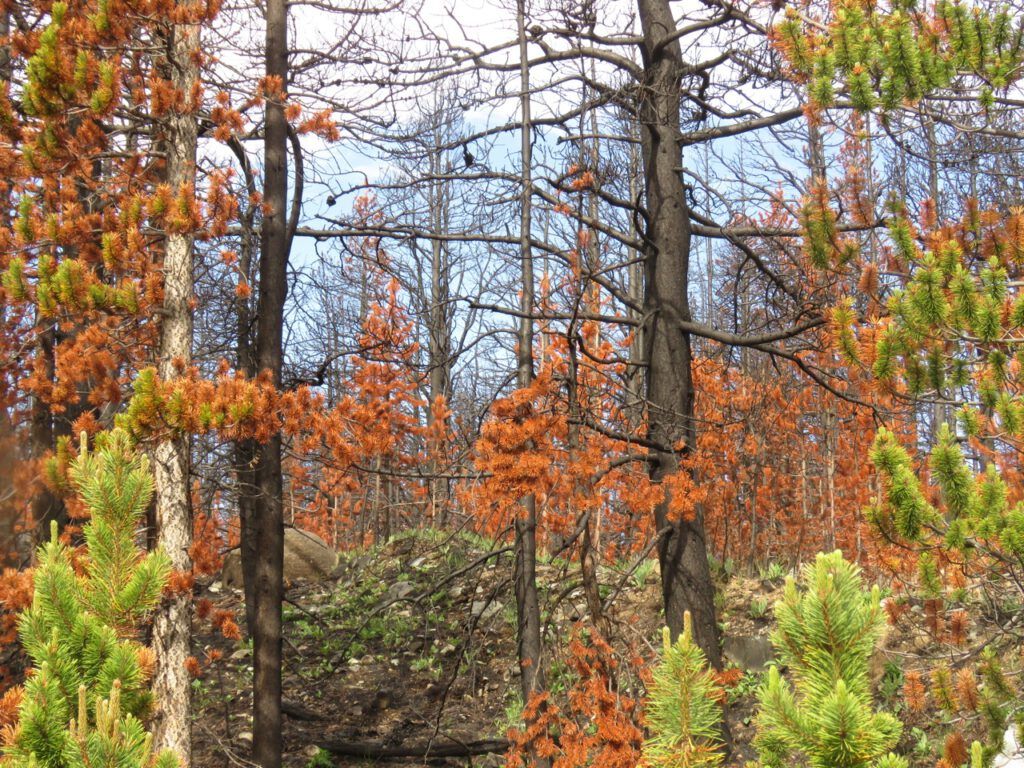 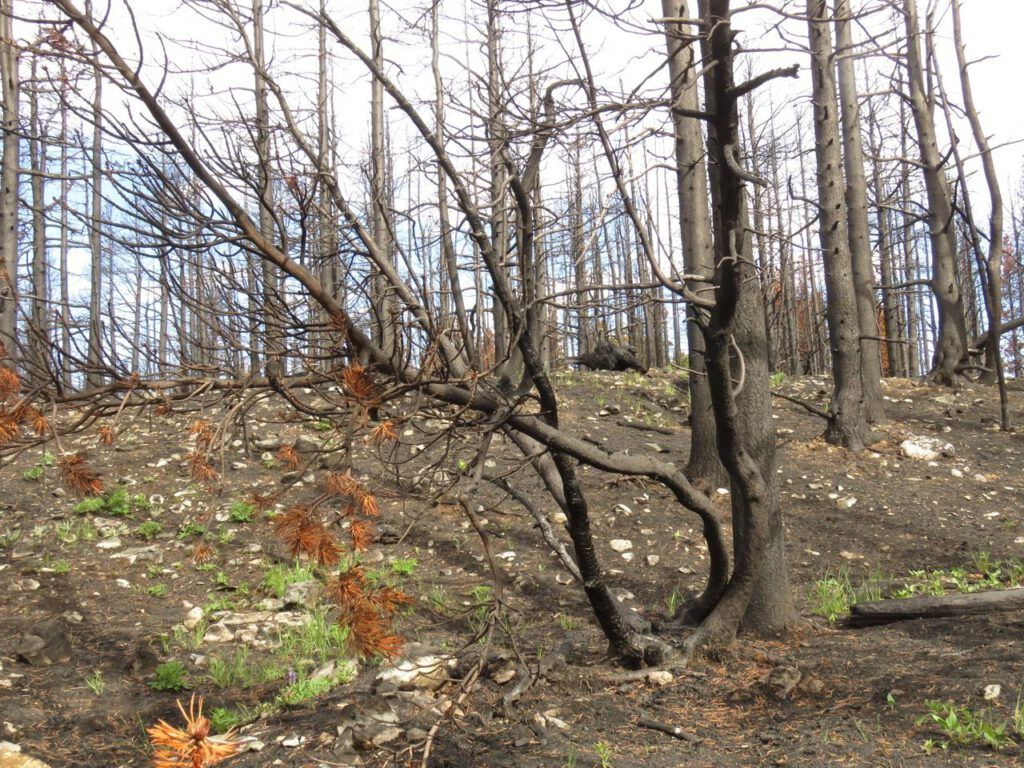 The roadside flowers were lovely. It’s not often lupins and paintbrush are in their prime at the same time. 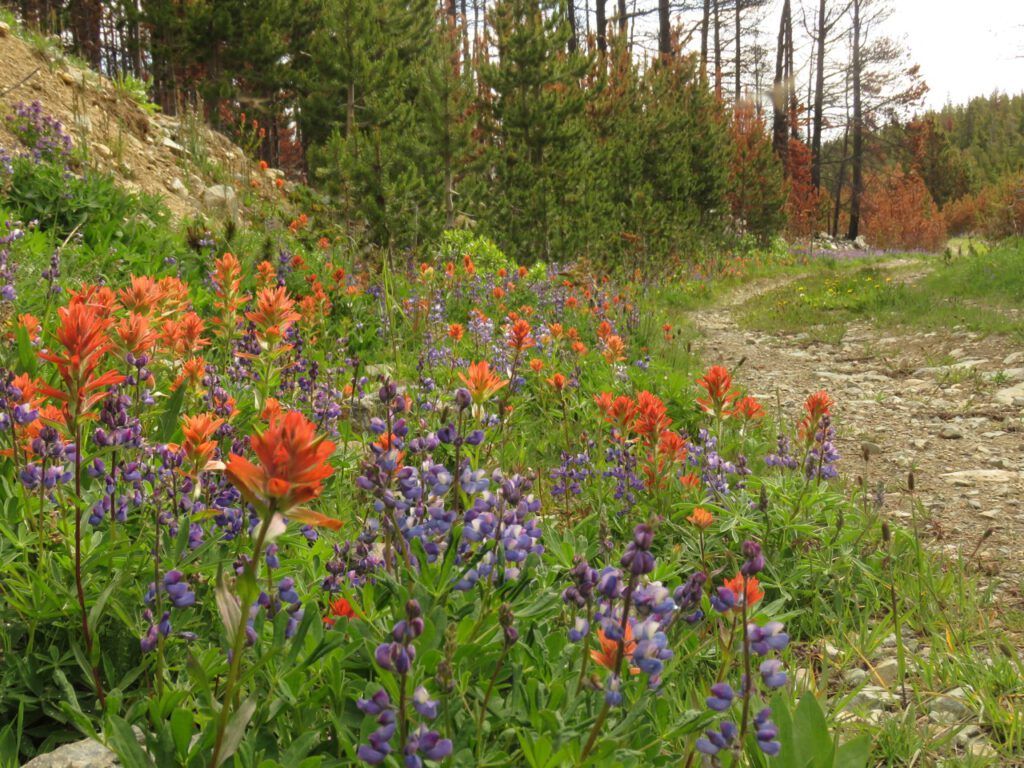 Most of the rest of this post is simply flower pictures, so if you are not interested, skip to the next post.  I, however, was enraptured to see all my old friends. 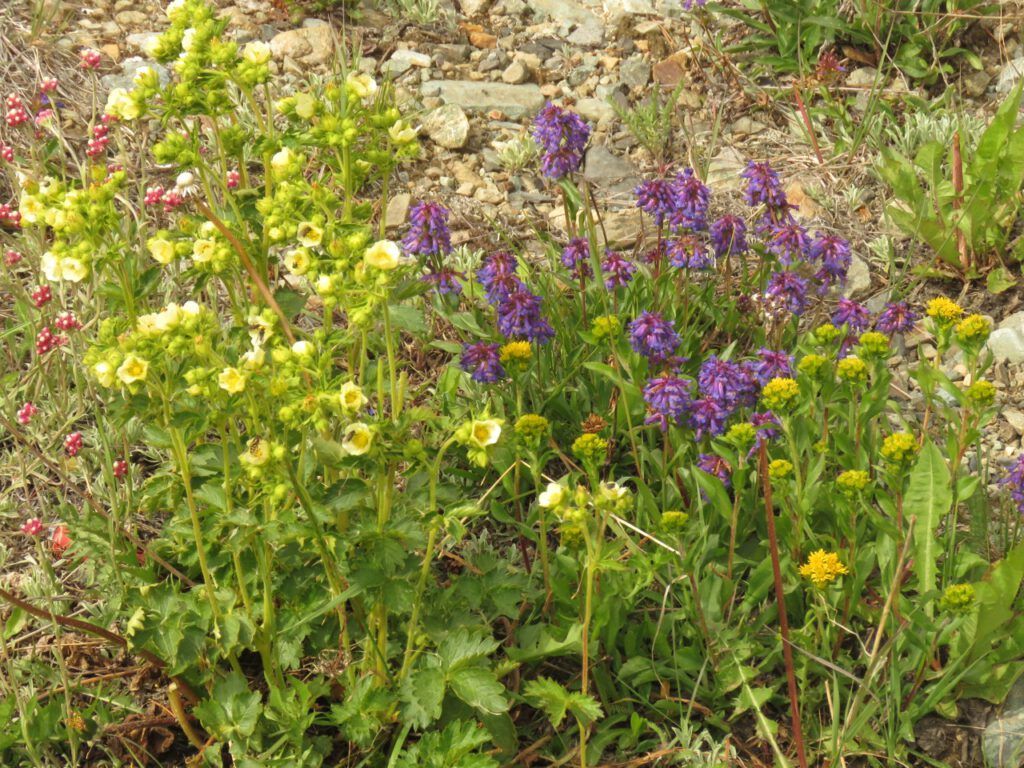 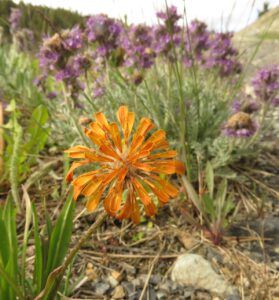 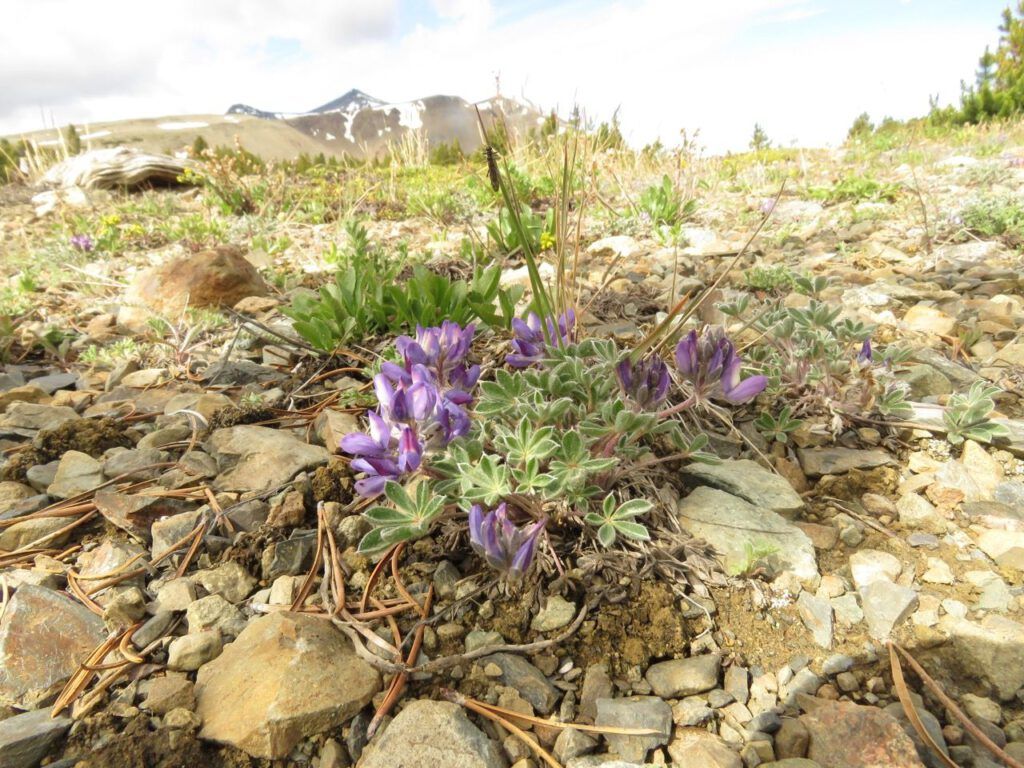 This charming plant is the size of a white clover. 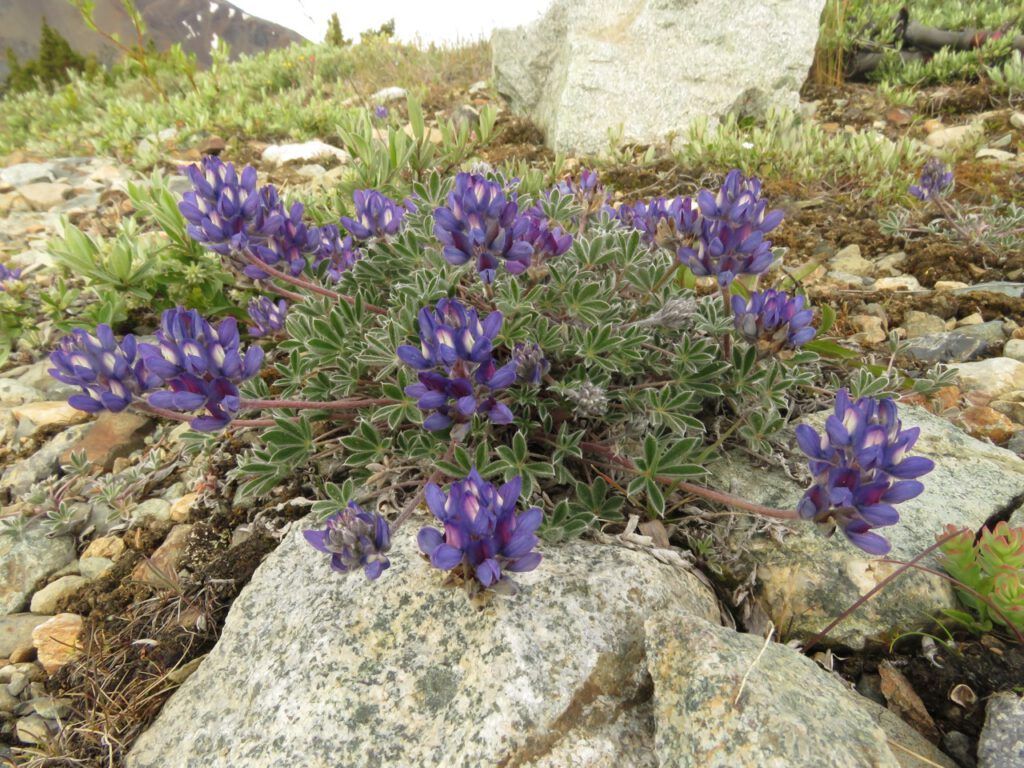 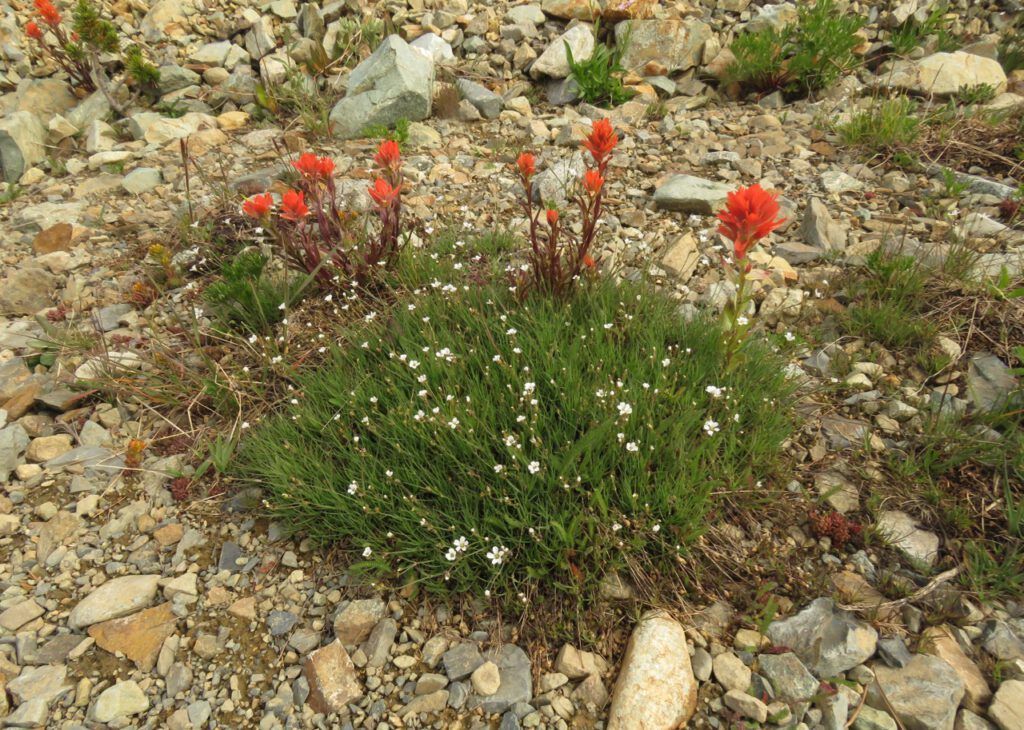 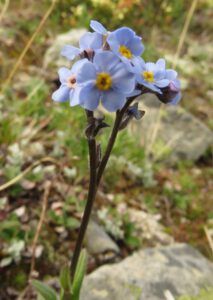 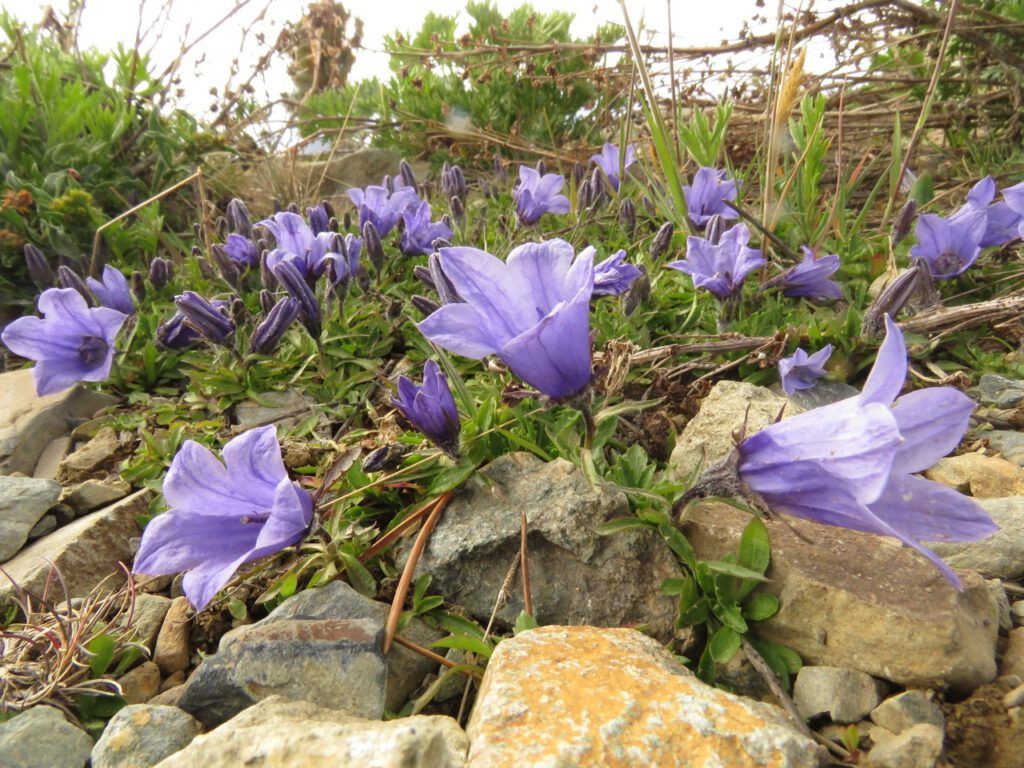 As I climbed through the subalpine I was not alone.  A Townsend solitaire observed me from a bonsai pine. 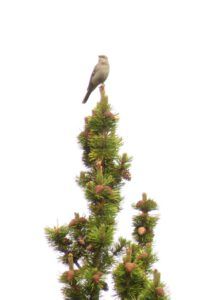 And I was accompanied by hundreds of mosquitos. 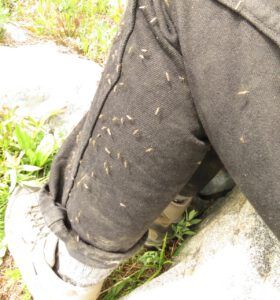 Before long, I heard the drone of a motor – I have never been up Perkins Peak without encountering atv-ers – and a line of no less than 9 of them came into view. 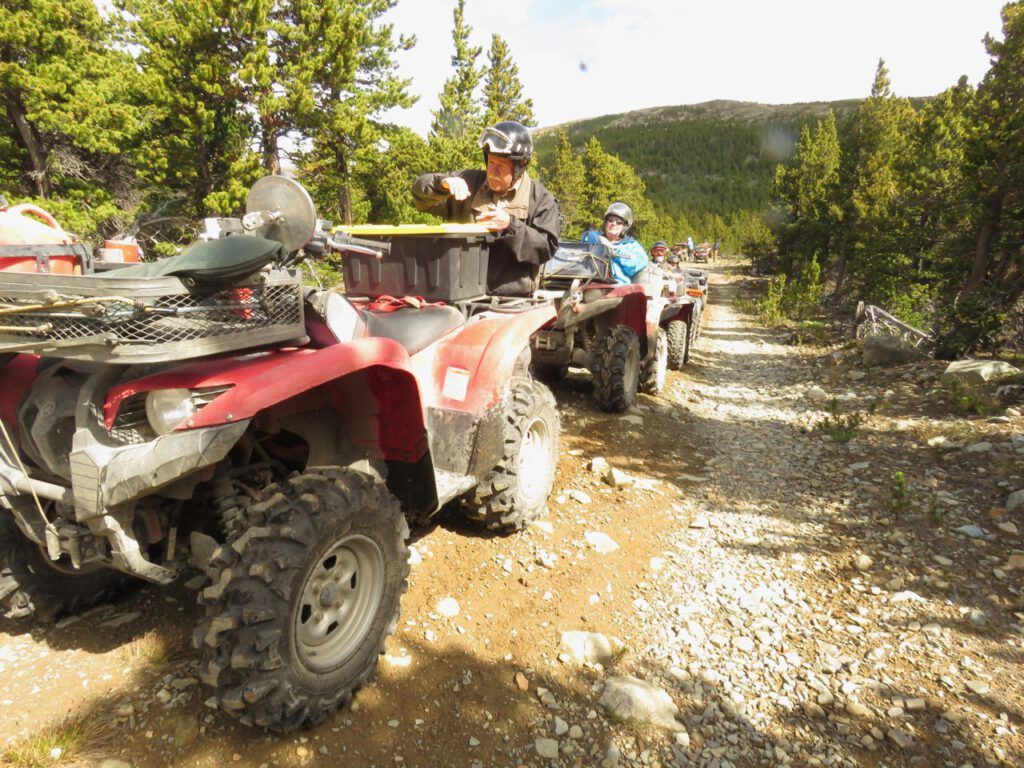 The lead man stopped to talk.  He asked if the pickup was mine and I explained the brake problem.  He said that he might happen to have some zip ties and he gave them to me.  With them, Ethan and Logan were able to bandage up the leak enough to get us home in one piece.

Three of these riders were carrying rifles and later I met another guy in cammos with another rifle and a serious-looking hunting dog.  What, I thought, could they be hunting?  Bear season was finished and deer and moose not yet started. I came to the conclusion it must be mountain goats.  All the atv-ers went down apparently empty-handed – but my volunteers saw six goats near the summit – where atv-ers could not go. 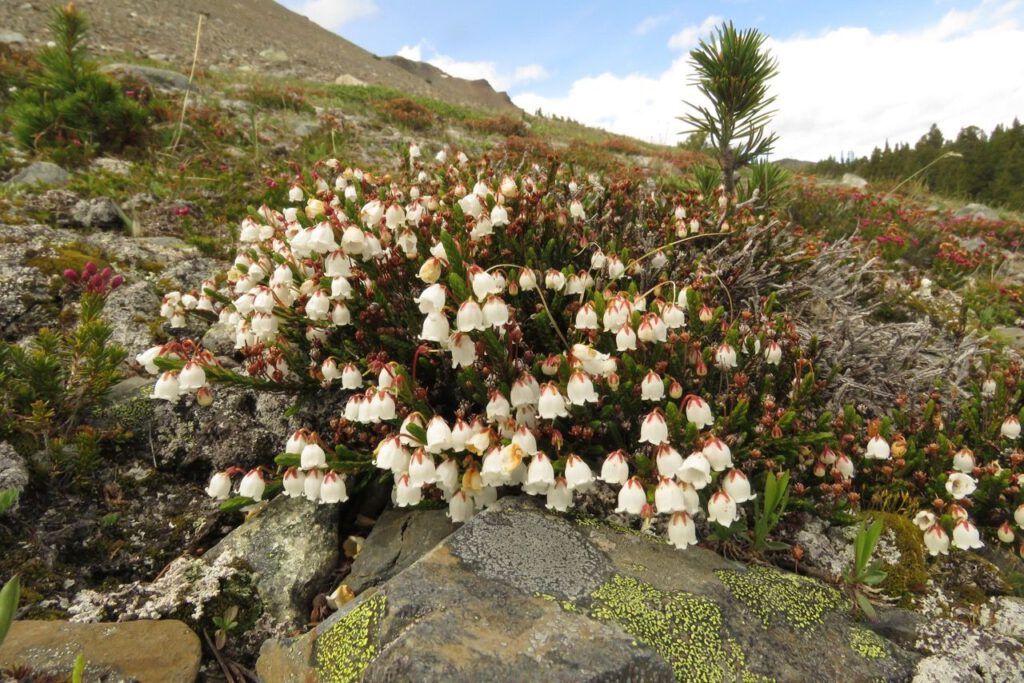 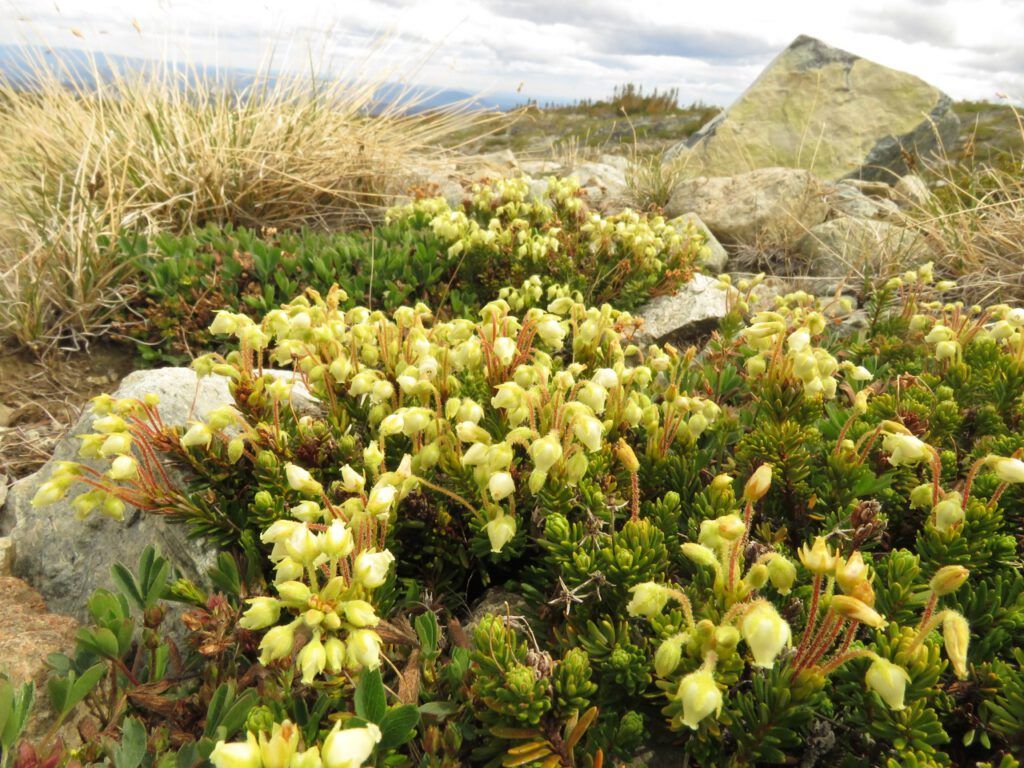 Mountain Marsh Marigold (except it now has a new name that I forget.) 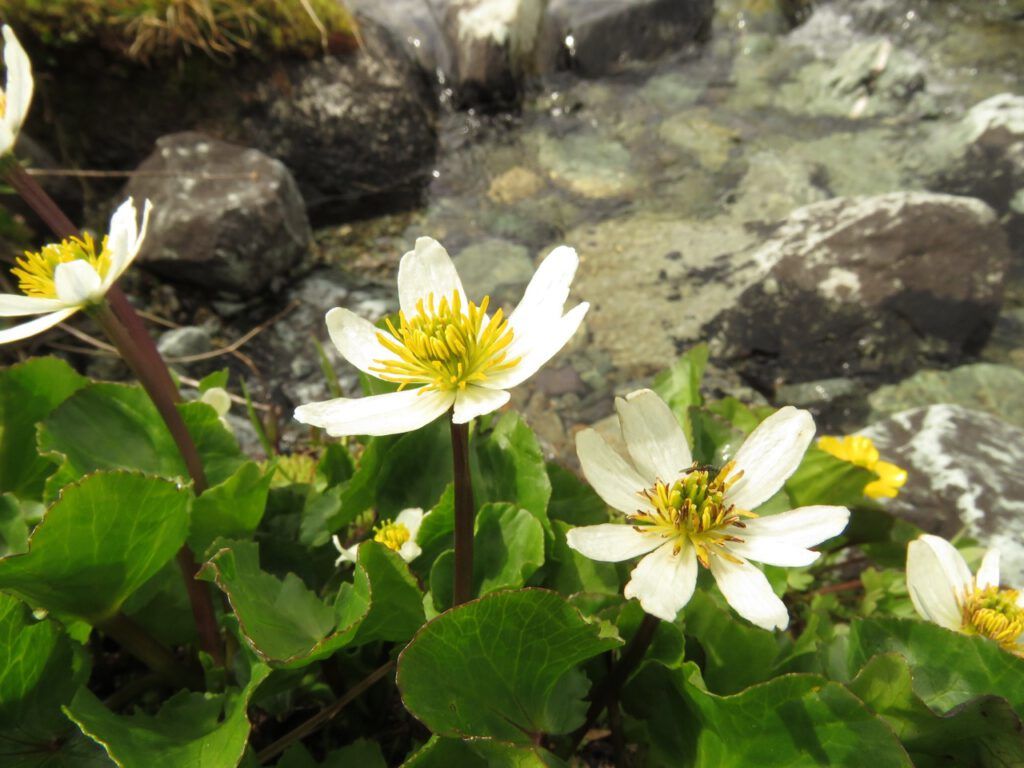 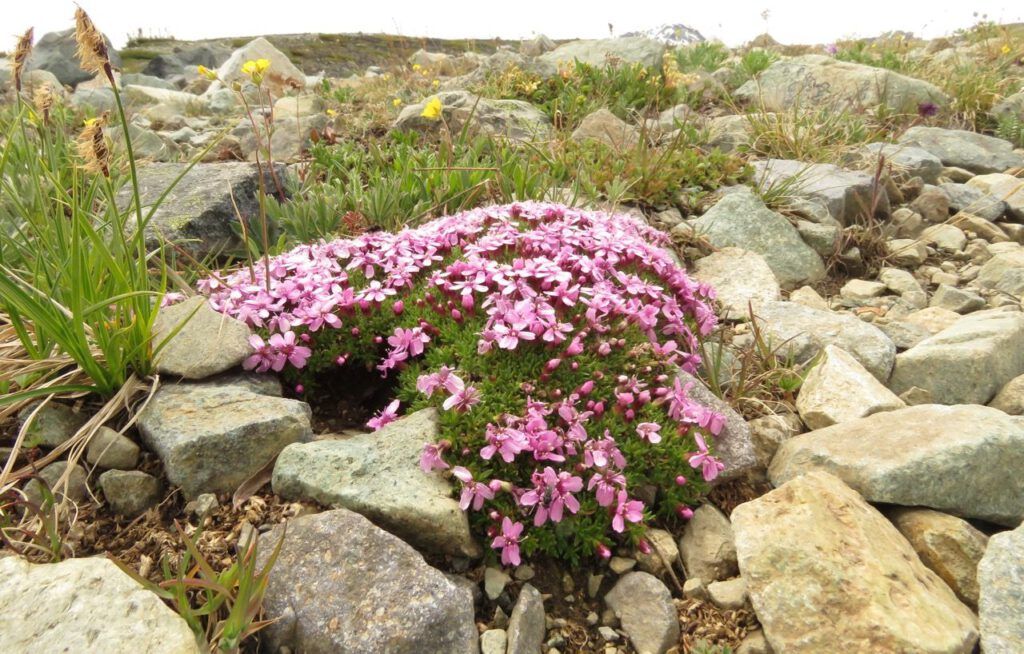 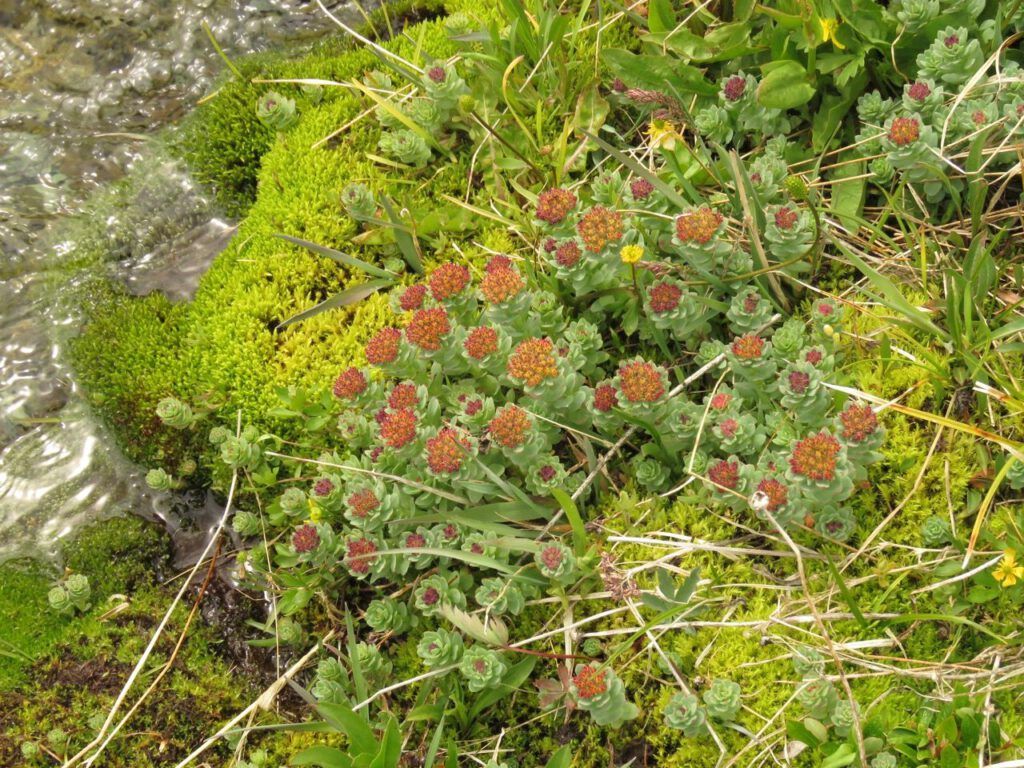 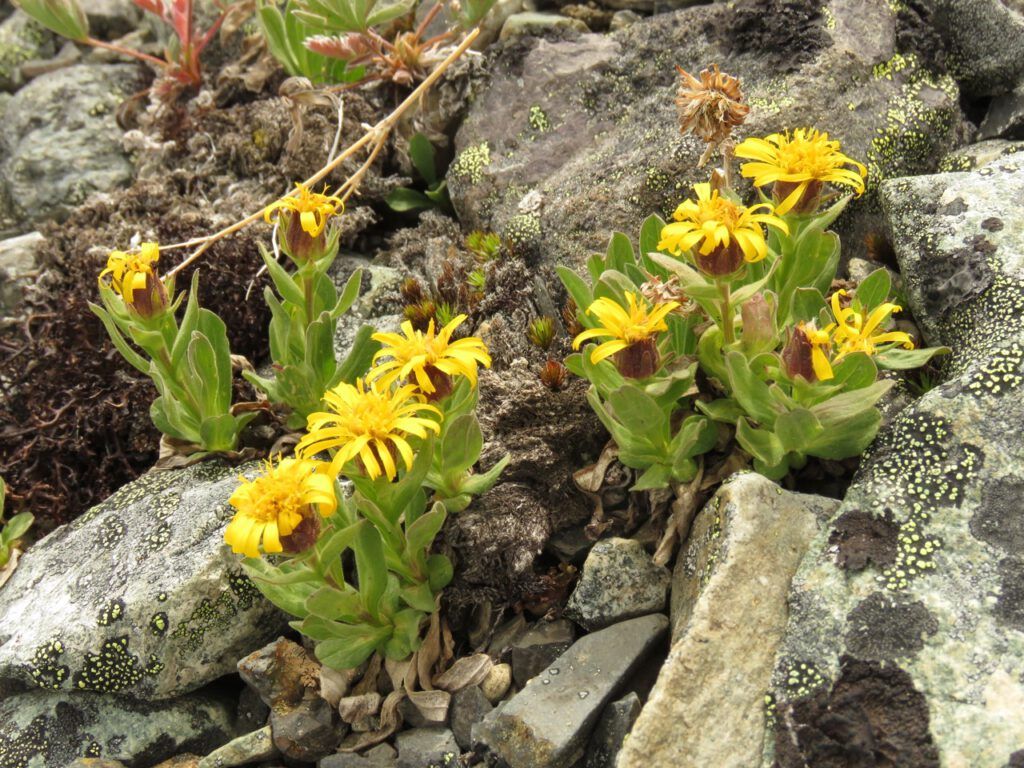 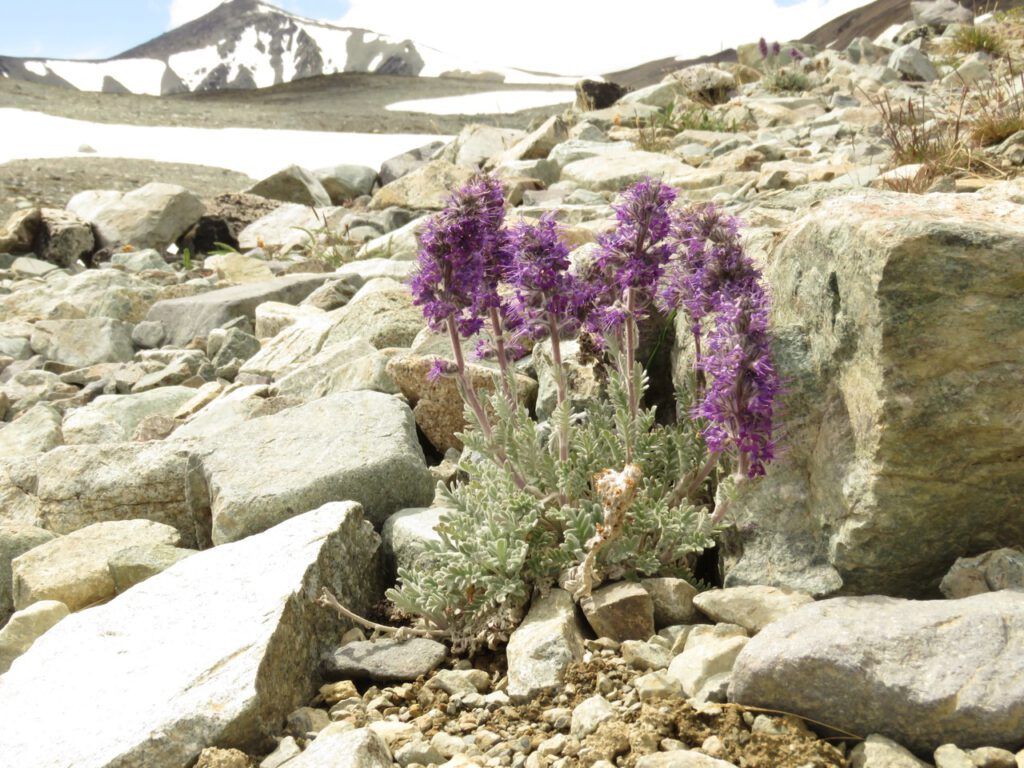 Potentilla uniflora with the curious leaves of Payson’s drama below. 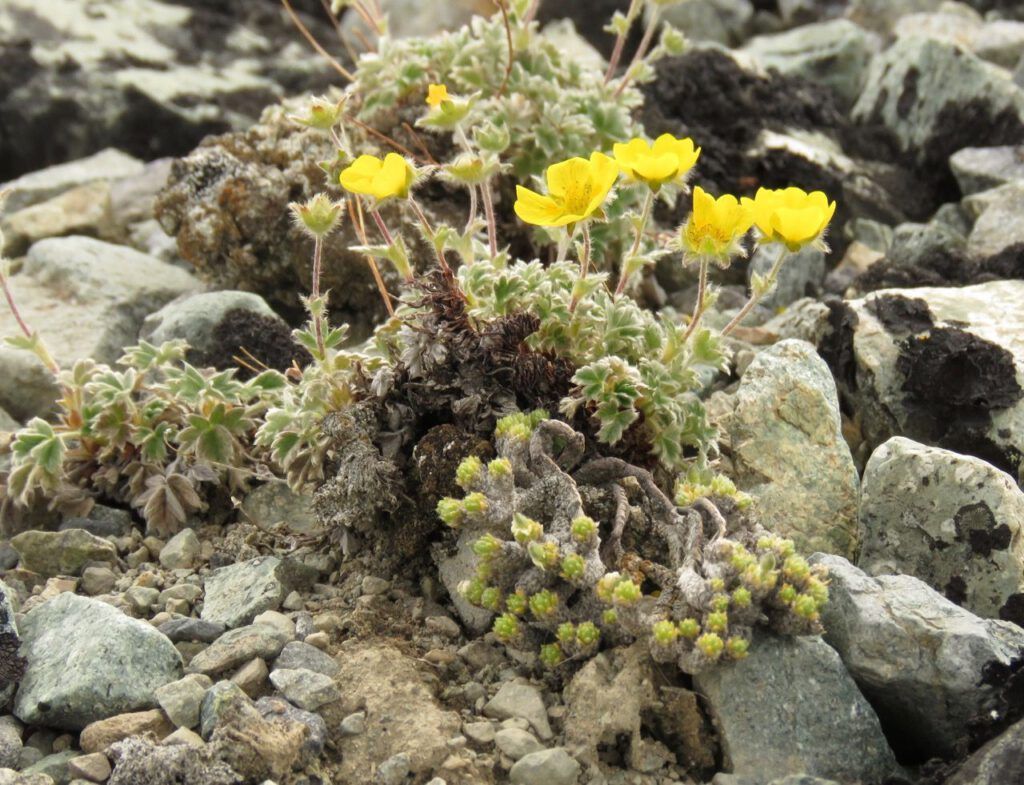 And here are the happy hikers coming down. 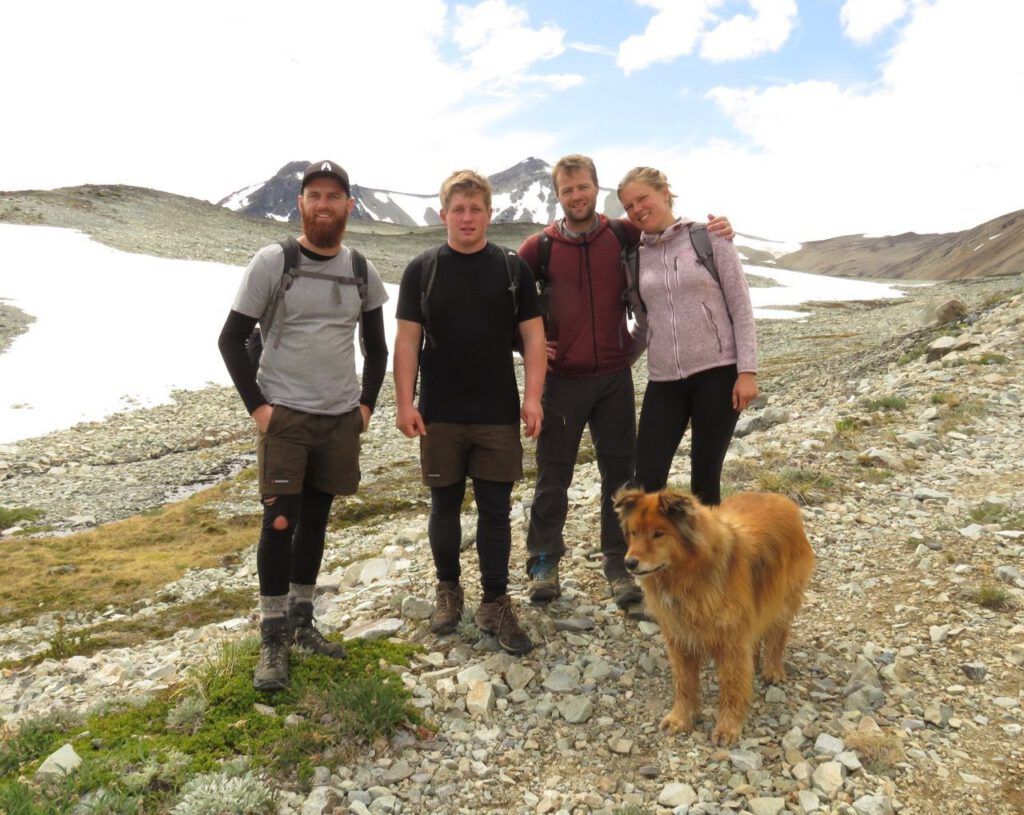 Thanks all four of you for being such exceptional volunteers.  I am glad we were able to fit Perkin’s Peak into your stay.