The fall colours turned slowly – then they came all in a rush. 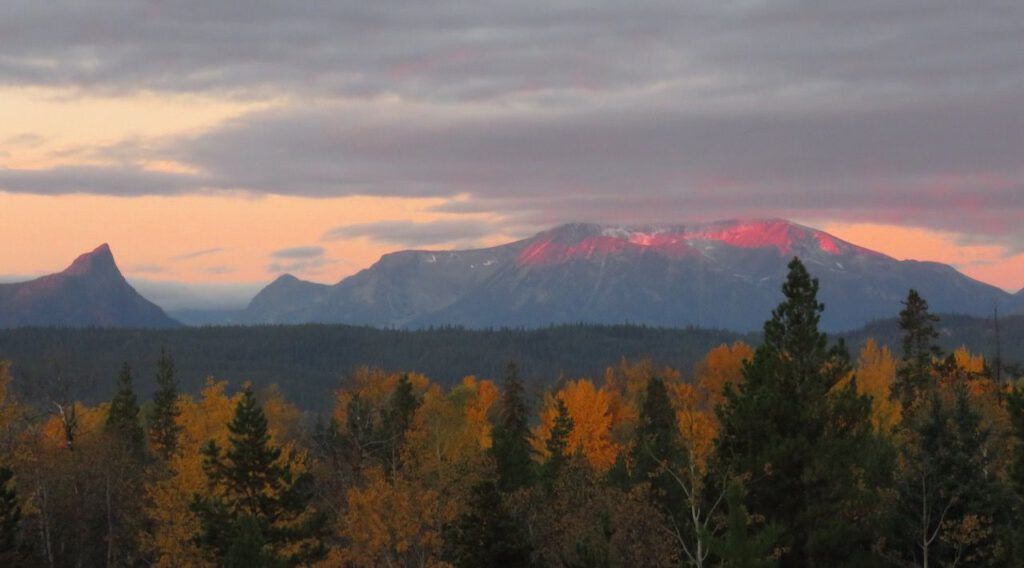 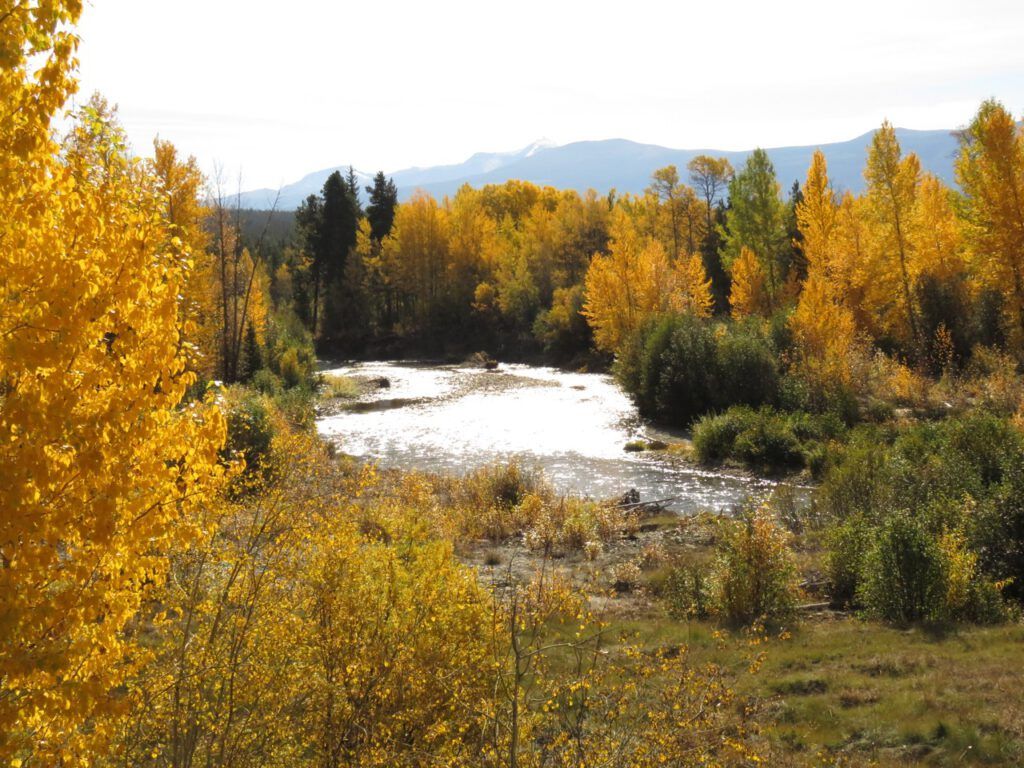 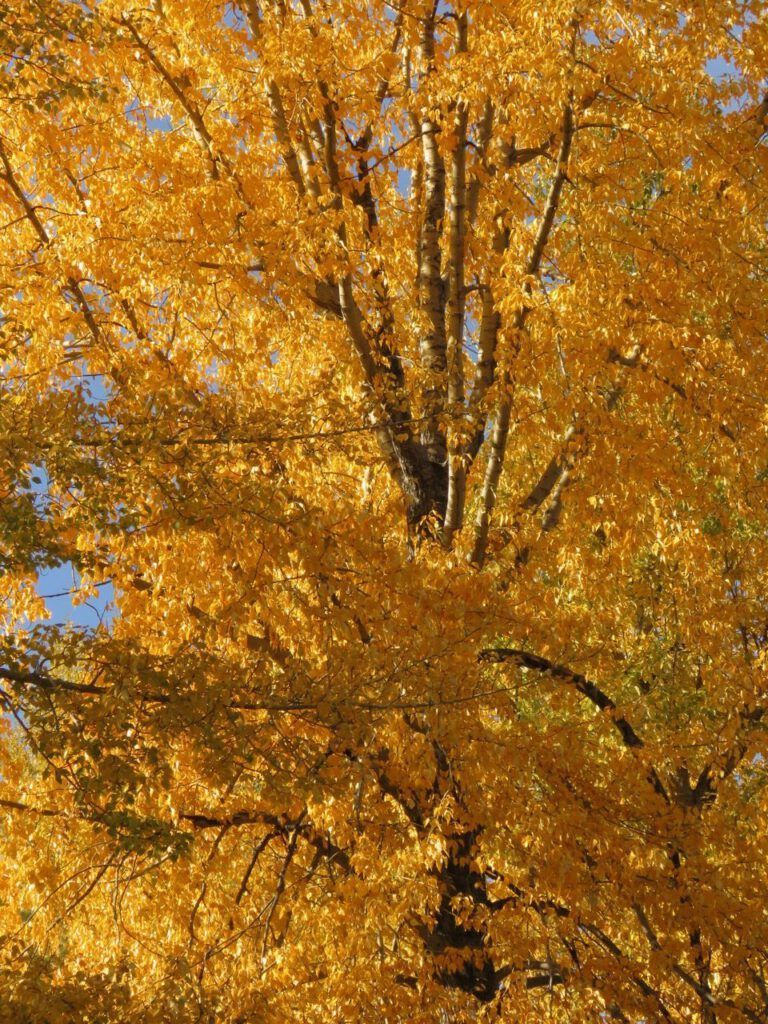 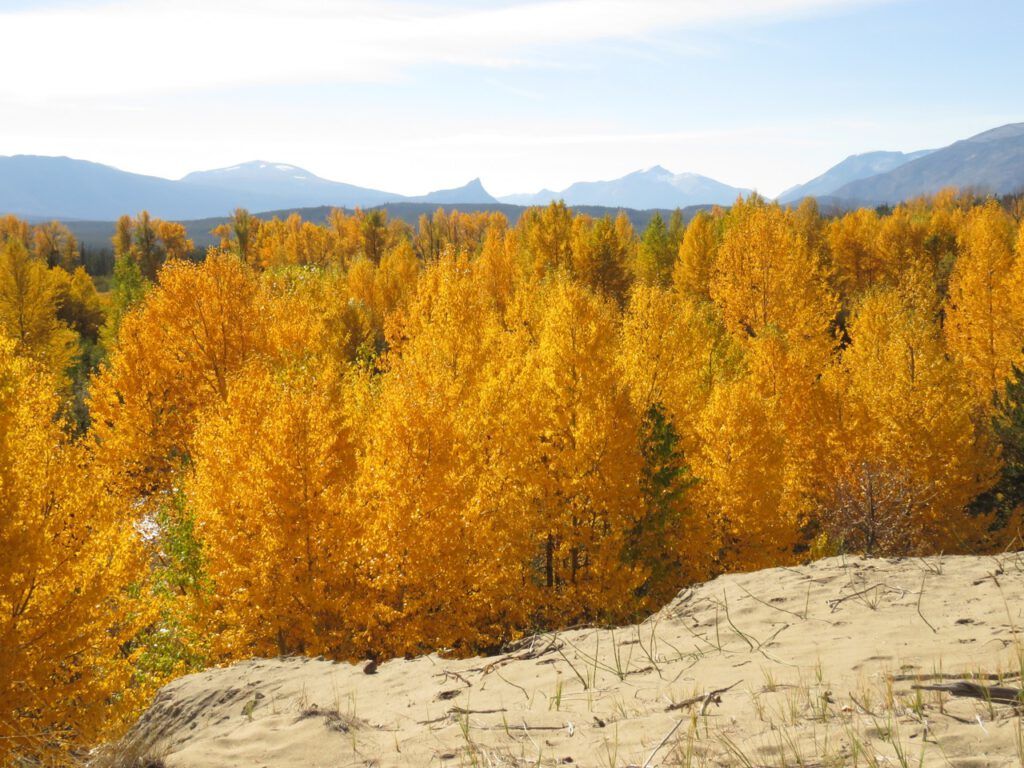 The roadsides were red with wild roses. 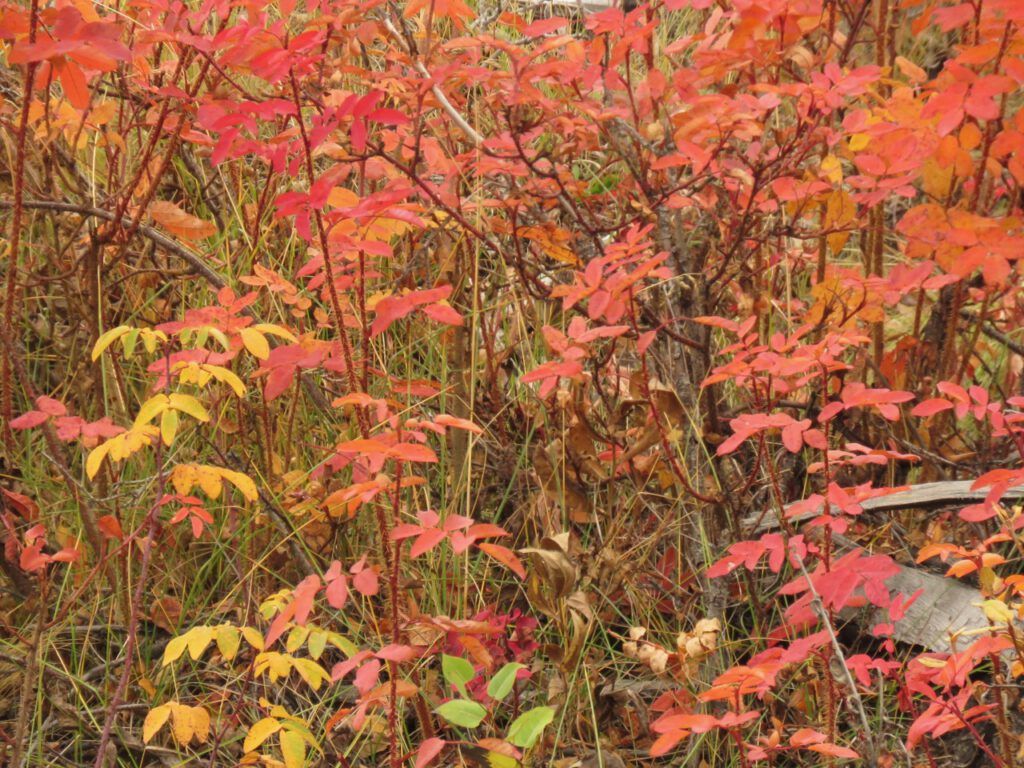 and, in one place (rare for here), osier dogwoods. 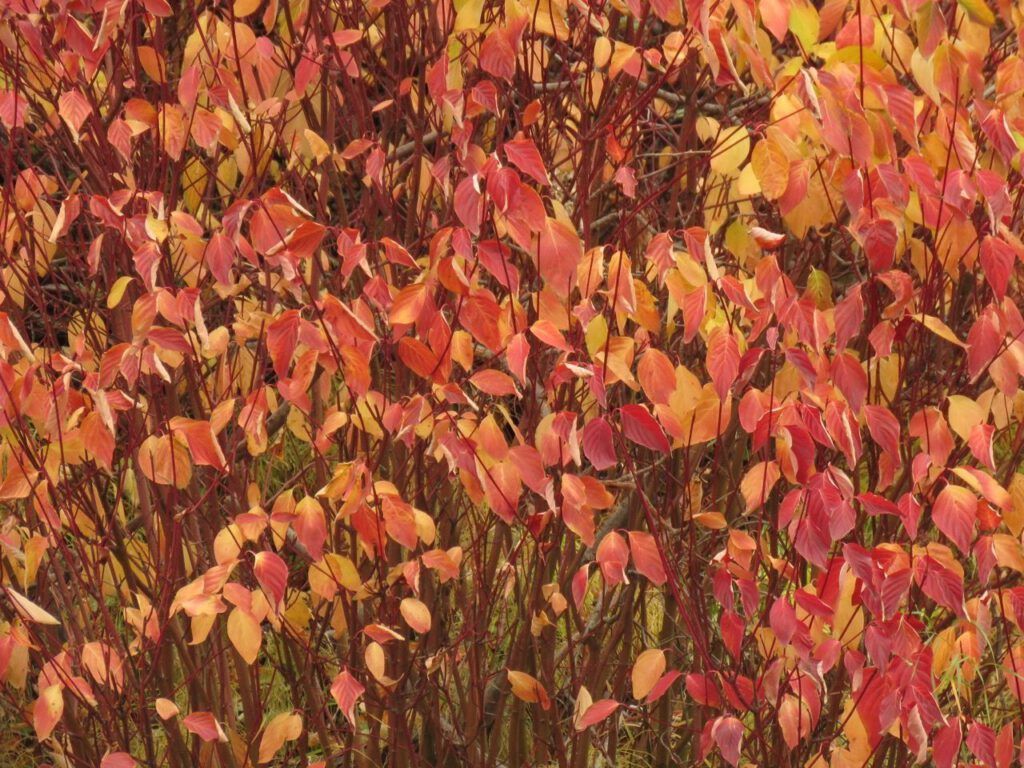 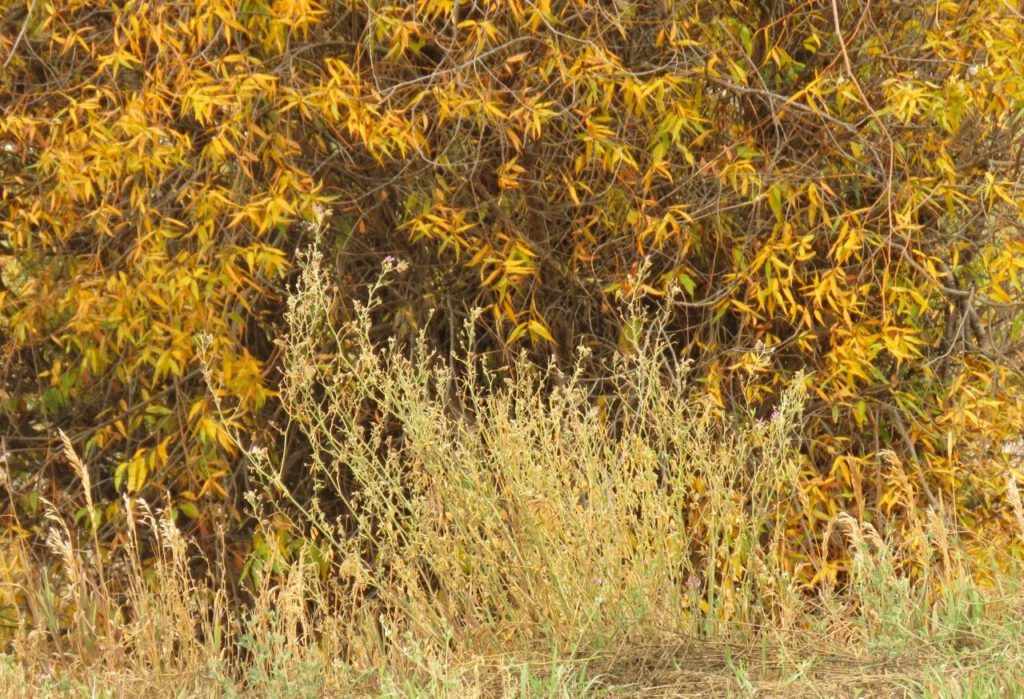 But snow was forecast. 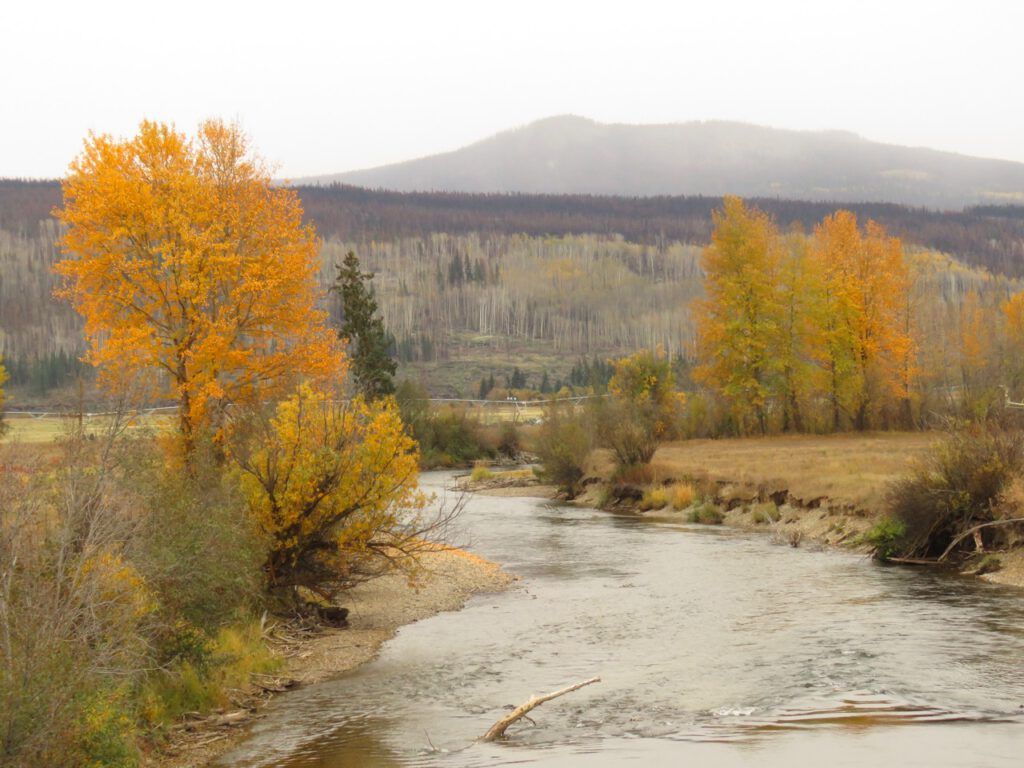 The tapestry of the Kleena Kleene burn presented an interesting colour scheme. 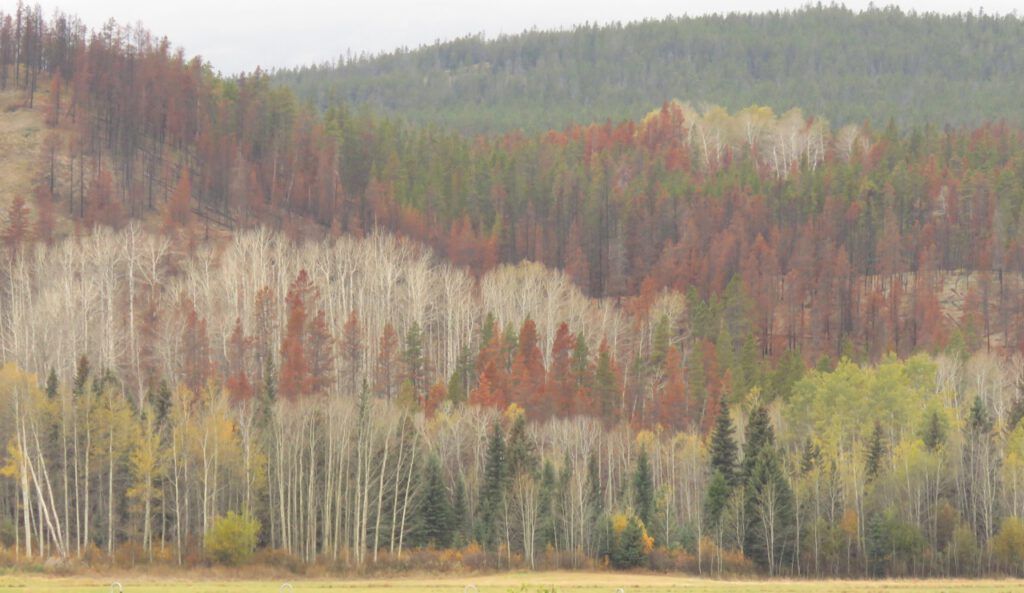 That evening, it started to snow.  As Jonas did before him, Friedi’s main job is burning brush to help make my place more fire-smart. 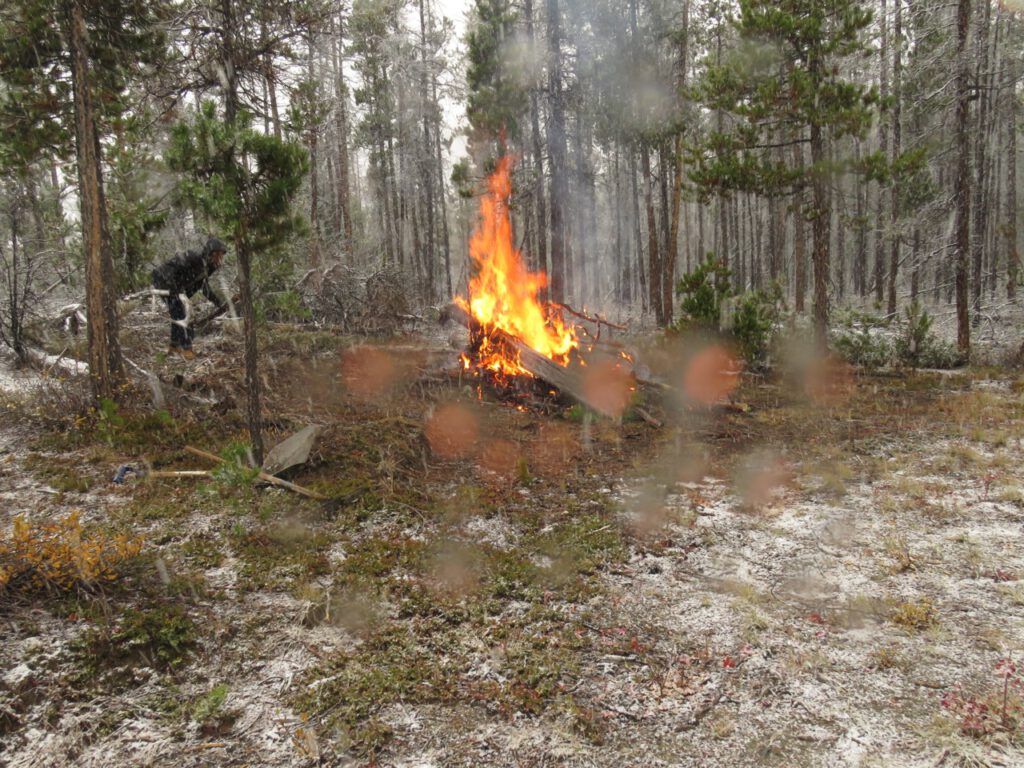 The following morning was not so pleasant to work in, but the fall colours made it very pretty. 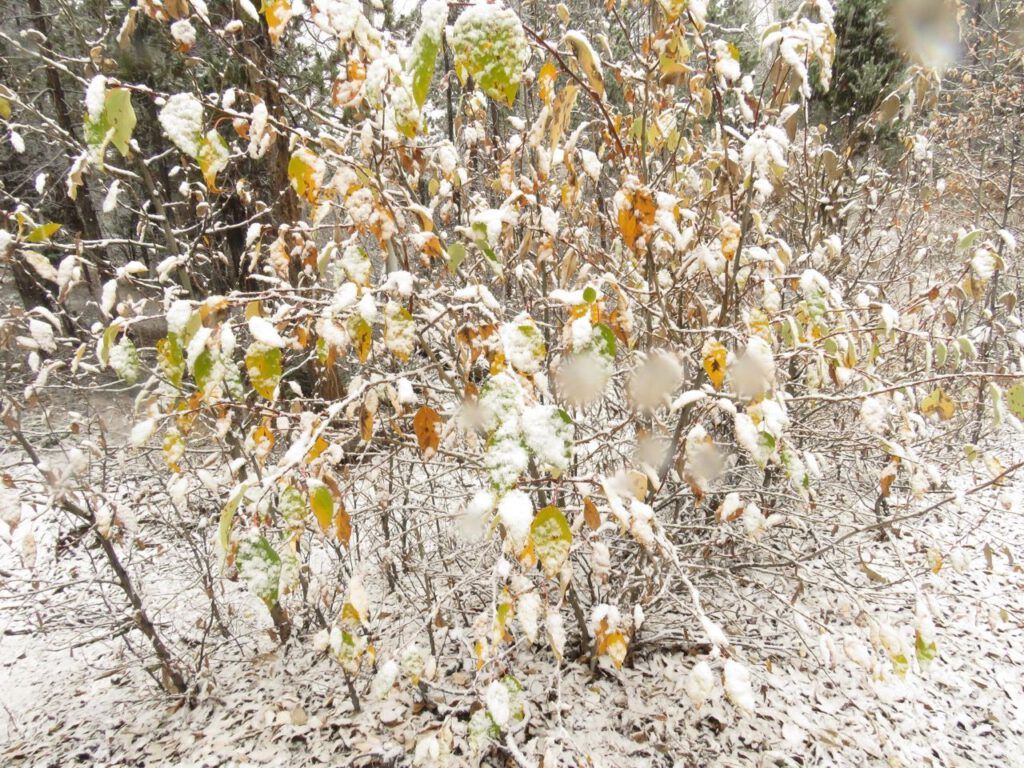 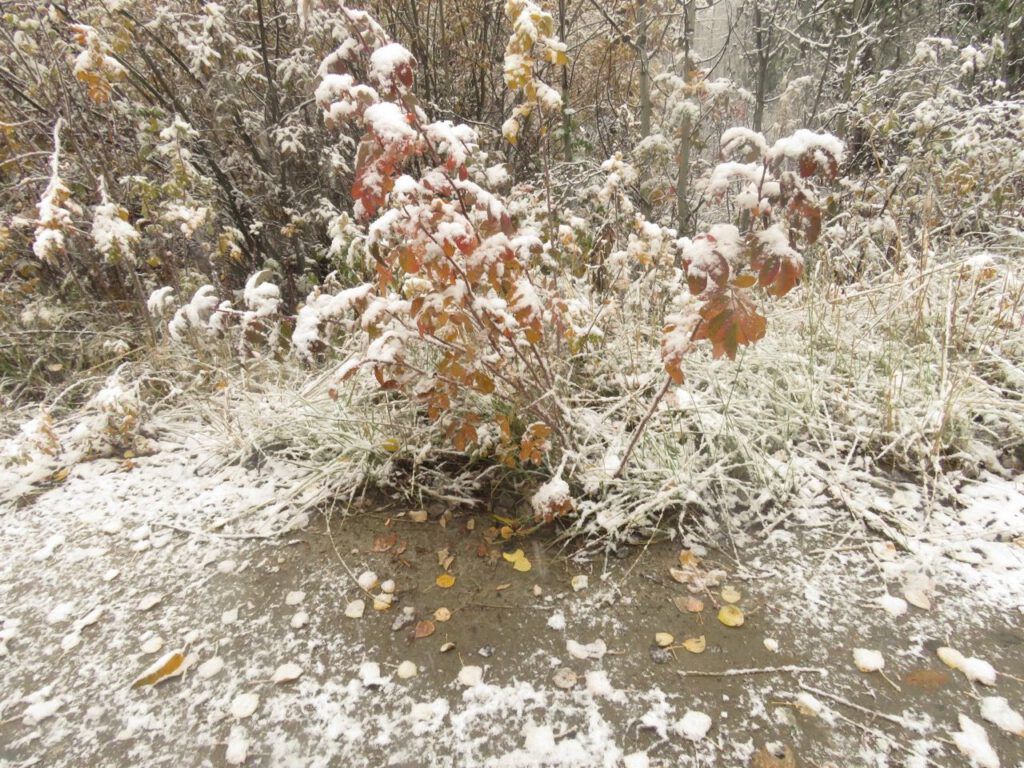 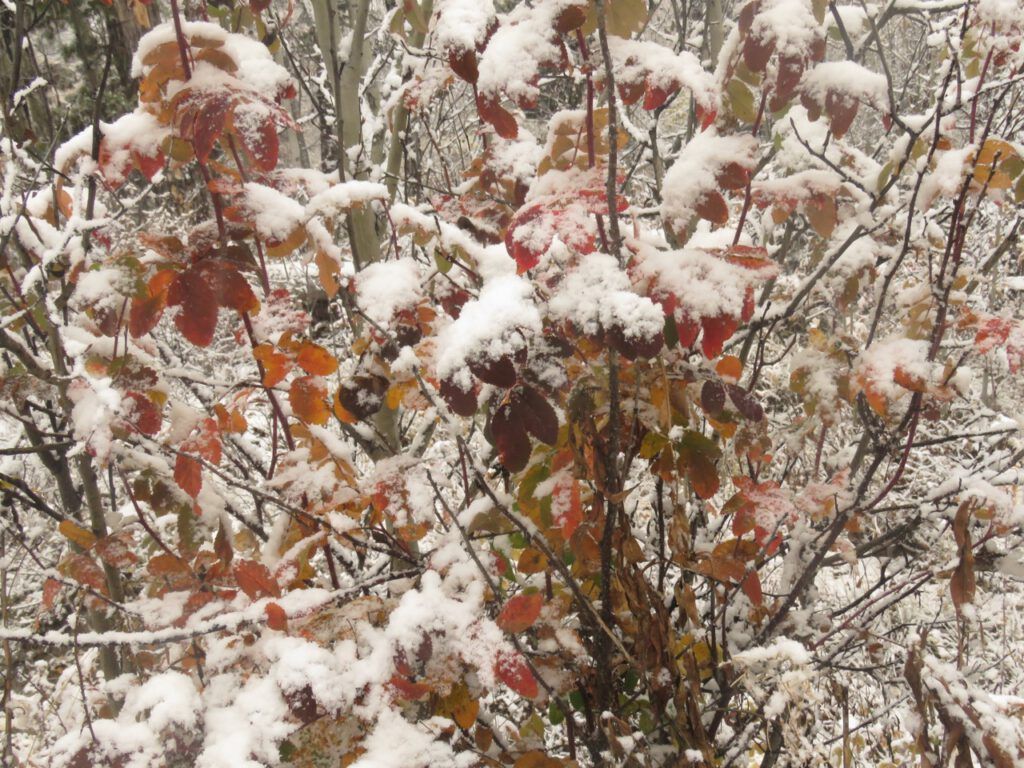 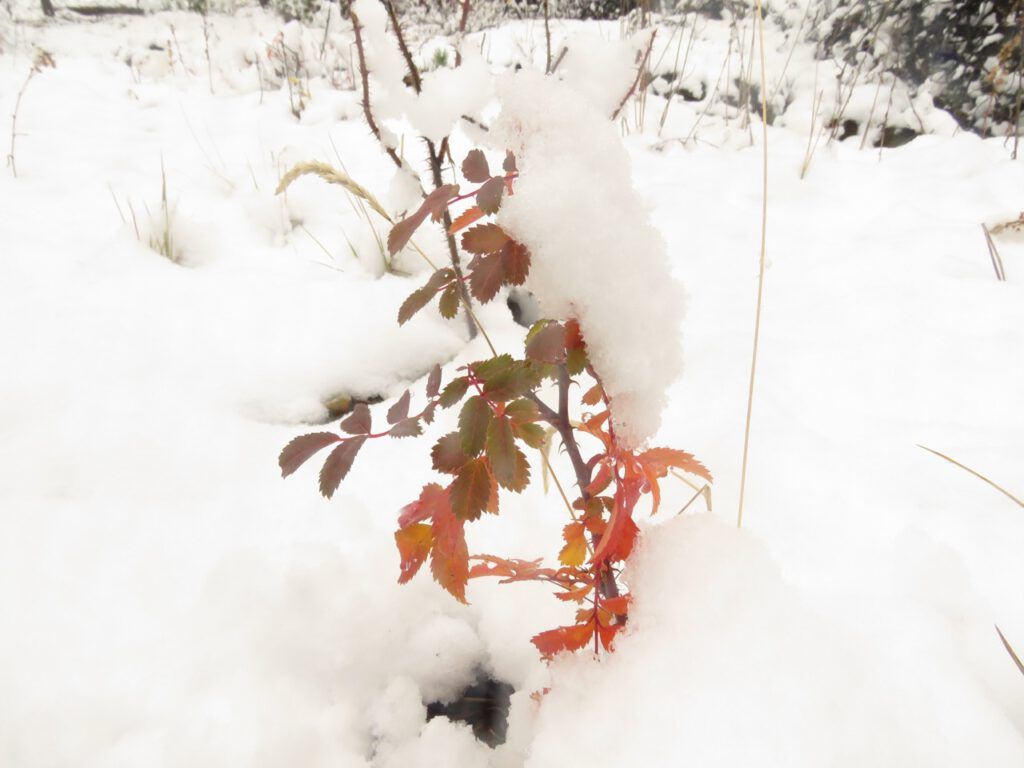 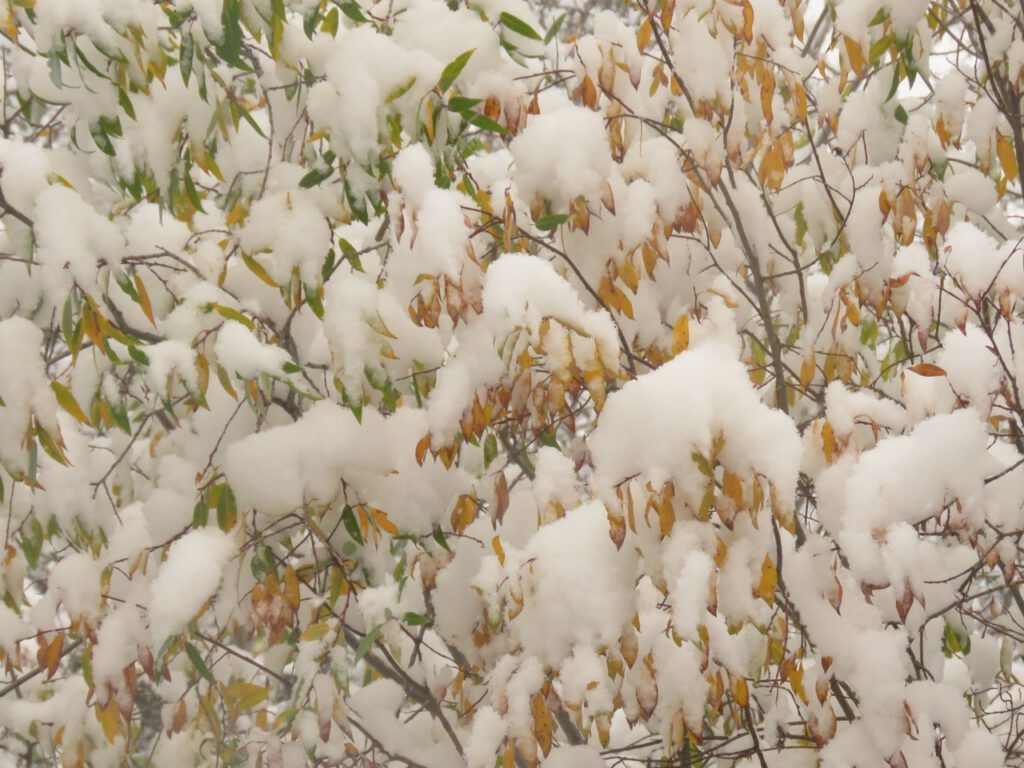 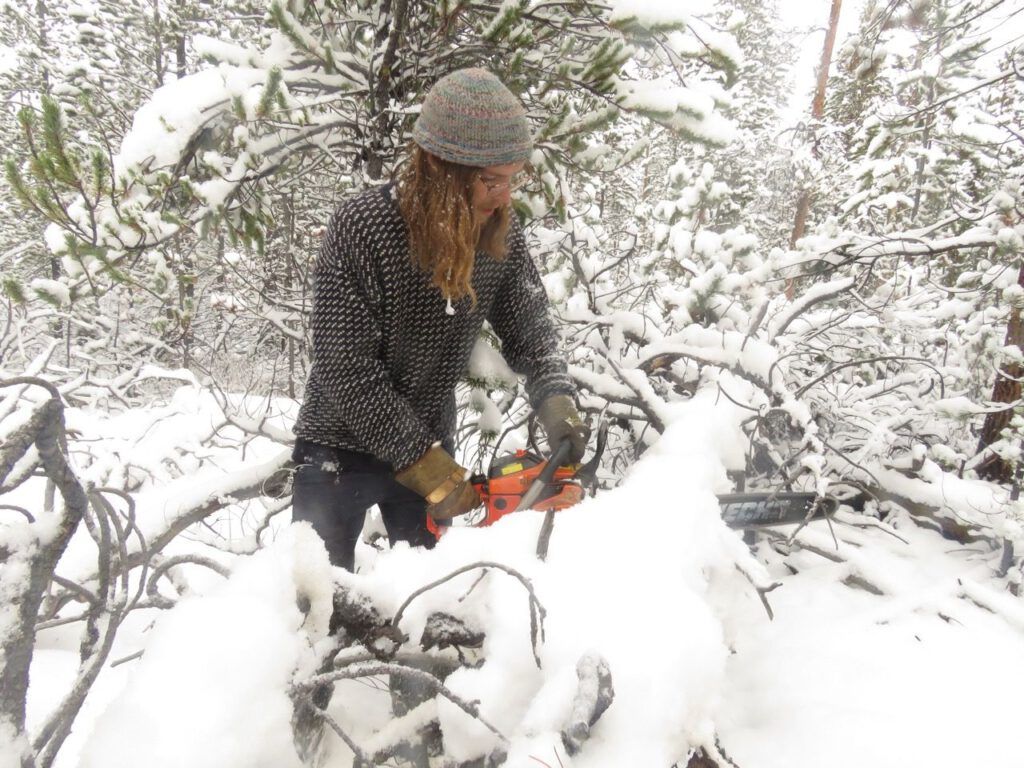 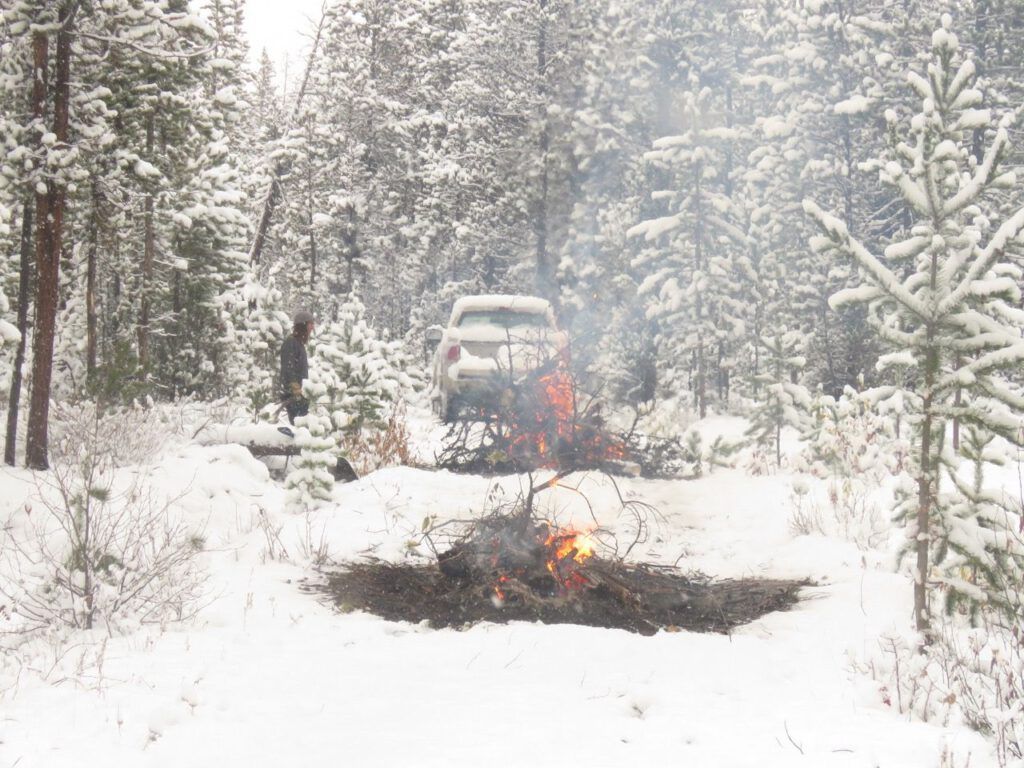 My neighbour, Dillon, has a dog, Gilbert, who often comes to my place when Dillon goes away.  He plays with Harry – that’s OK, but is a terrible thief.  I have to lock human food away from even the highest shelf or he will climb up and steal it.  I left a phone message, but when I received no reply I called Dillon’s dad – he said his son and wife were in Williams Lake having a baby!  They did not return for several days.  I had to separate all three dogs at meal times so they did not fight.  Gilbert had no manners and would not wait until I put his dish down.  Gilbert generally accompanied us on our burning sprees – this was his favourite seat. 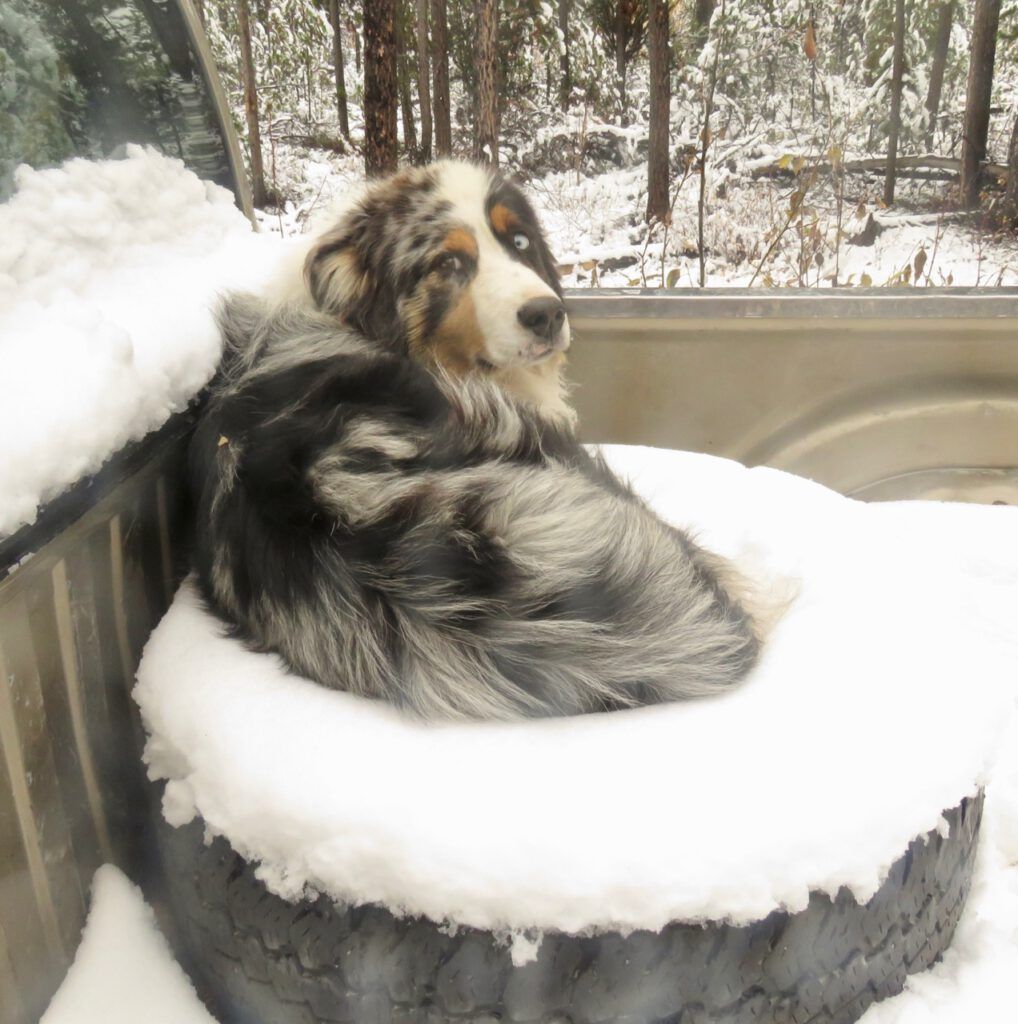 But all good things come to an end. 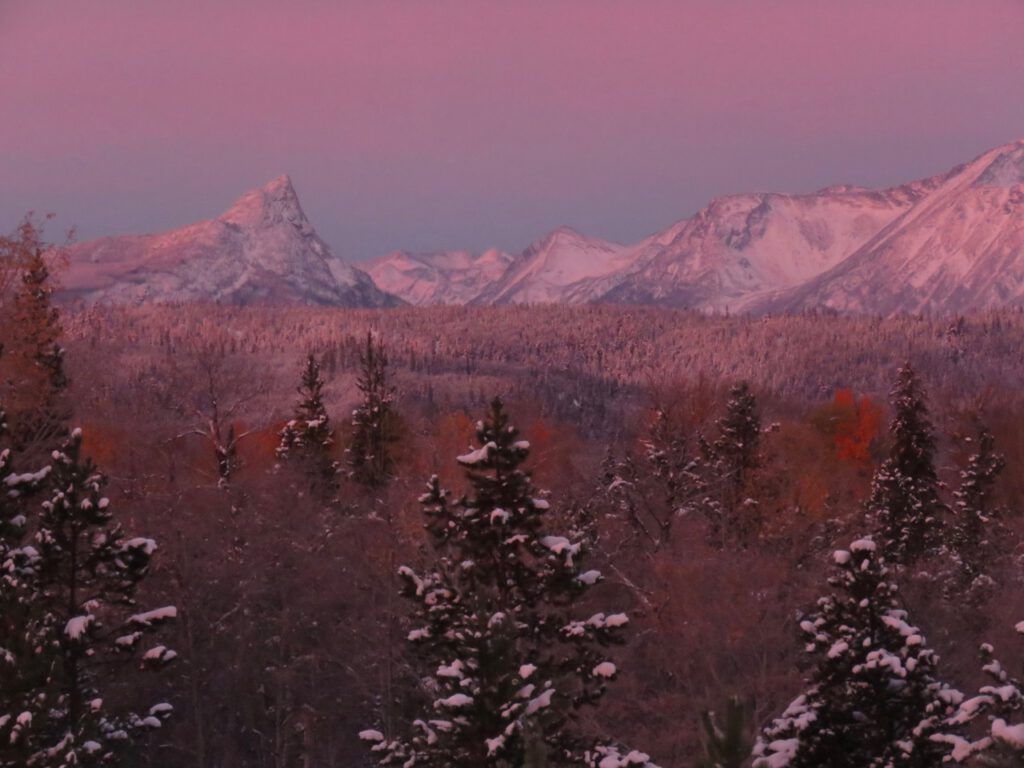 The only trouble was, it was -15C – ridiculous for September. 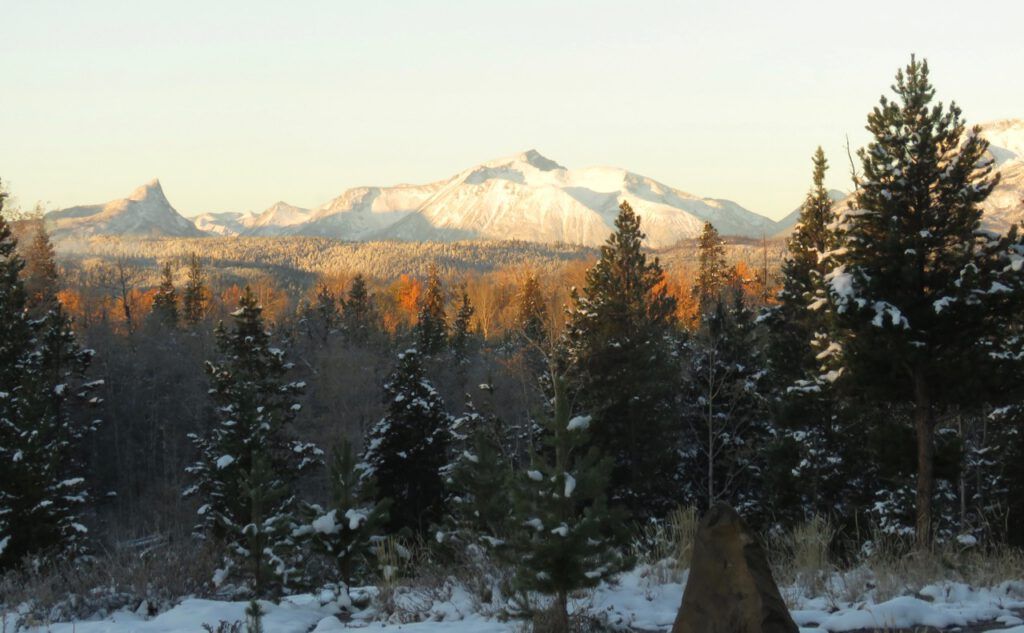 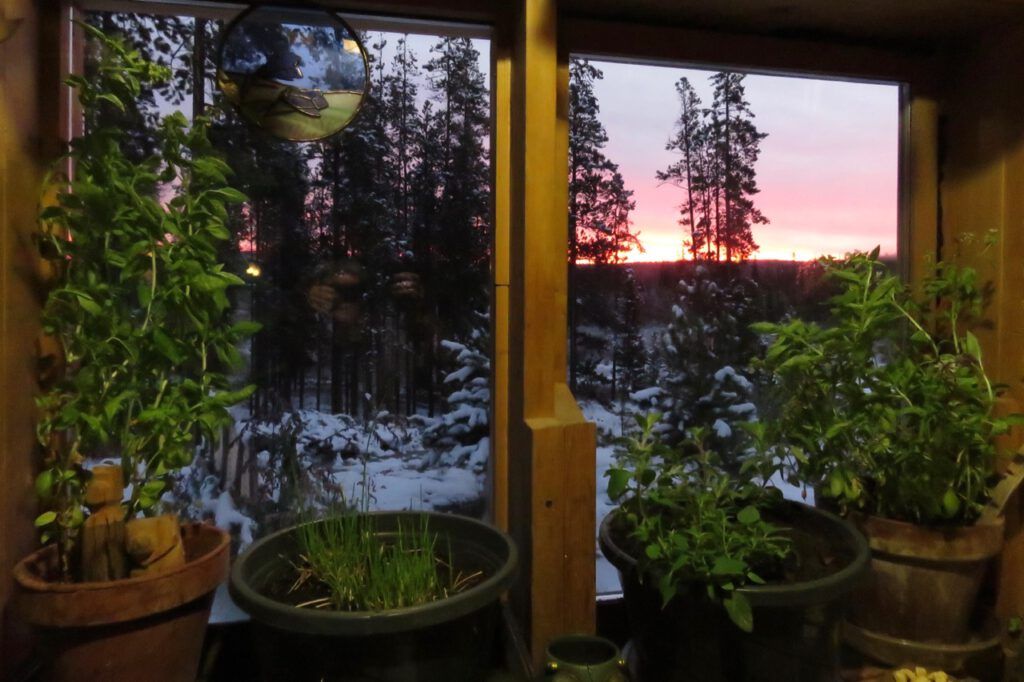 When I wanted to take Jonas to Bella Coola (previous post), we expected t0 go in the van.  But it would not start.  I had been complaining about ignition problems but the mechanics could not find anything wrong – now I was stuck.  The van is better for going down The Bella Coola Hill (it gears down further) but we had to take the truck.  It was a long day down the valley and I ended up driving home with Friedi in the dark.  On the unfenced gravel stretch between the top of The Hill and Anahim Lake, a horse ran in front of me.  I swerved and braked – no brakes.  I missed the horse, but had to drive very slowly home after that.

We are allowed 4 tows by BCAA – I’d already had one.  I now had two vehicles to deal with. First I had the van picked up.  It had two winter tires on and I was waiting for two more.  When these arrived in Williams Lake, I alerted the tow truck driver.  I tried driving the truck on the highway but the addition of brake fluid did not help at all and it was too dangerous.  So I had to get that towed as well.  That makes three tows this year.  I waited until the van was fixed then got a ride in with the tow truck driver. 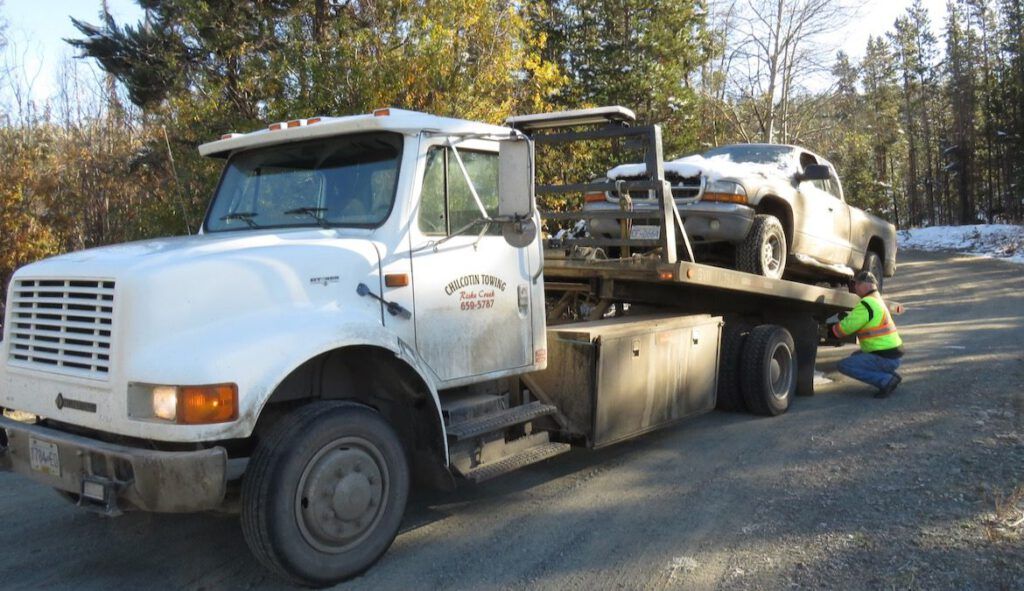 The snow still hung around but it was an absolutely beautiful day. 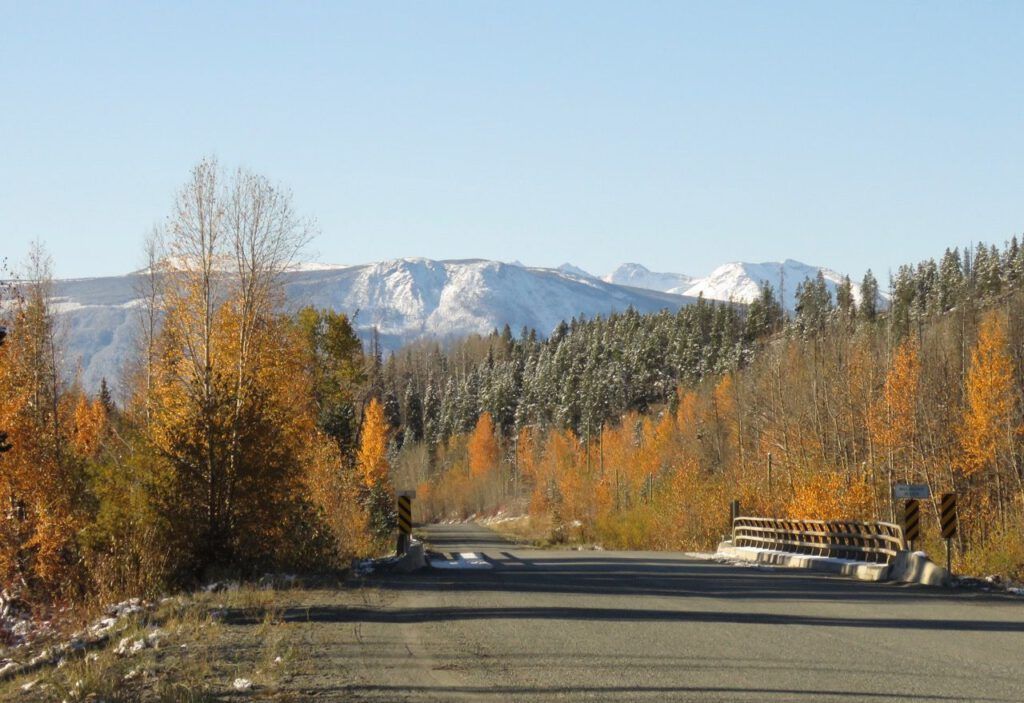 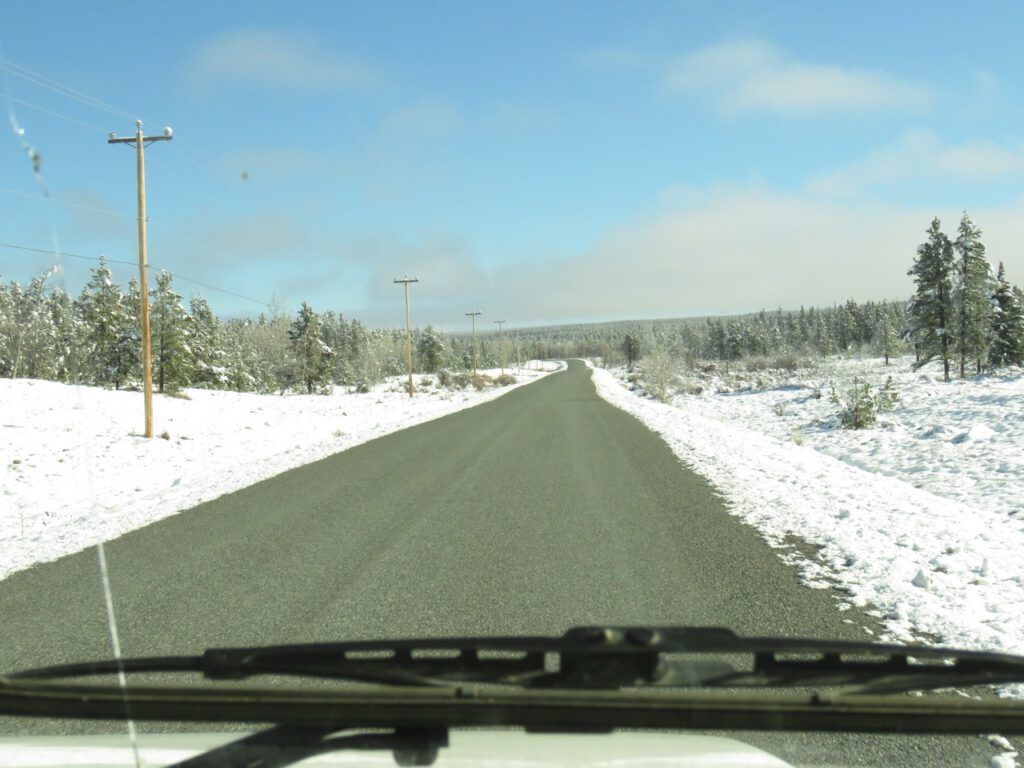 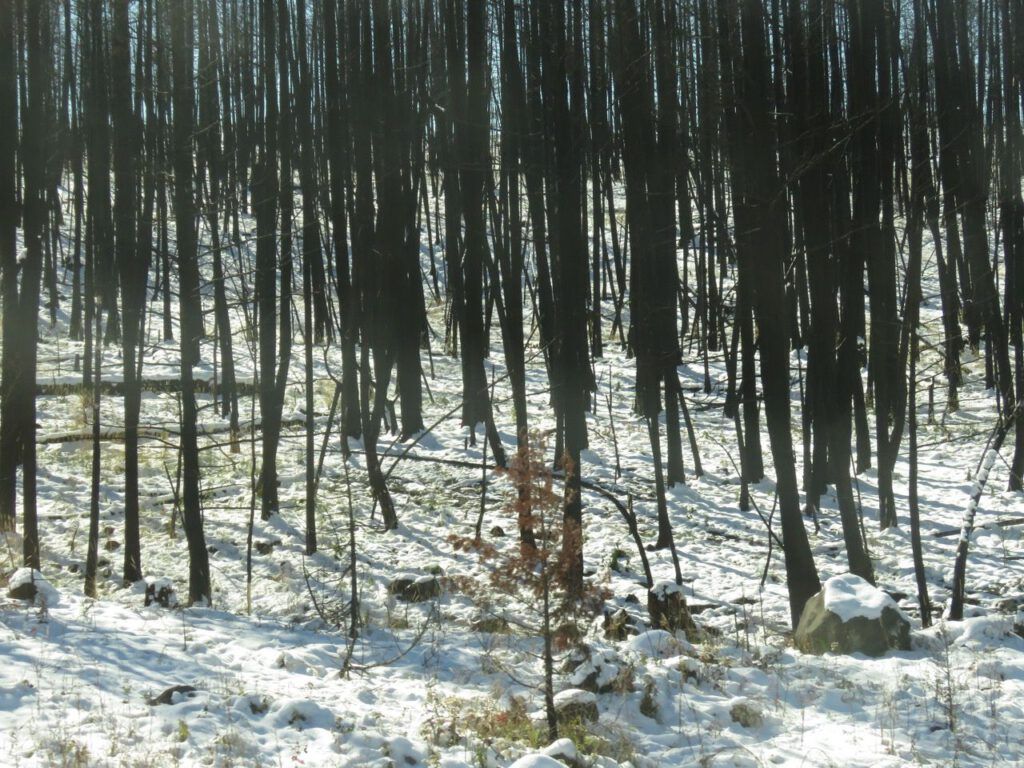 He told me that when he had left home that morning (3 hours east of my place) he had seen a black bear dragging a dead deer across the road and into the bush.  He showed me the trail the bear had made in the snow.

But suddenly, it was warmer, and around the Fraser river there was no snow at all. 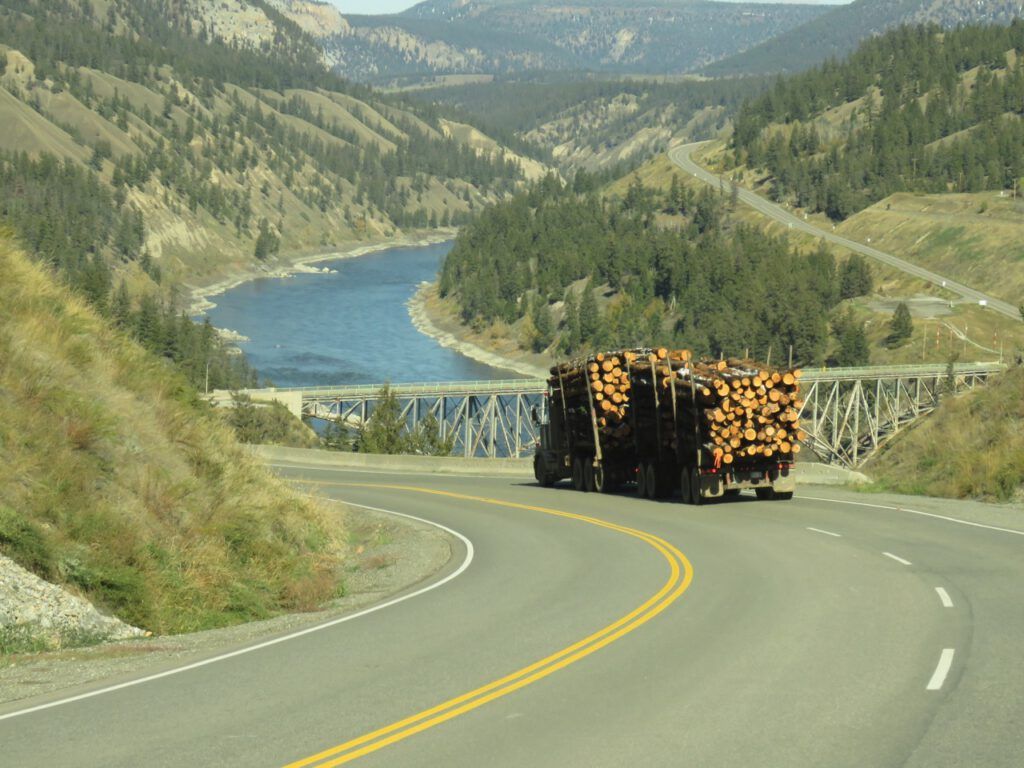 Coming home, the sun went down about half way. 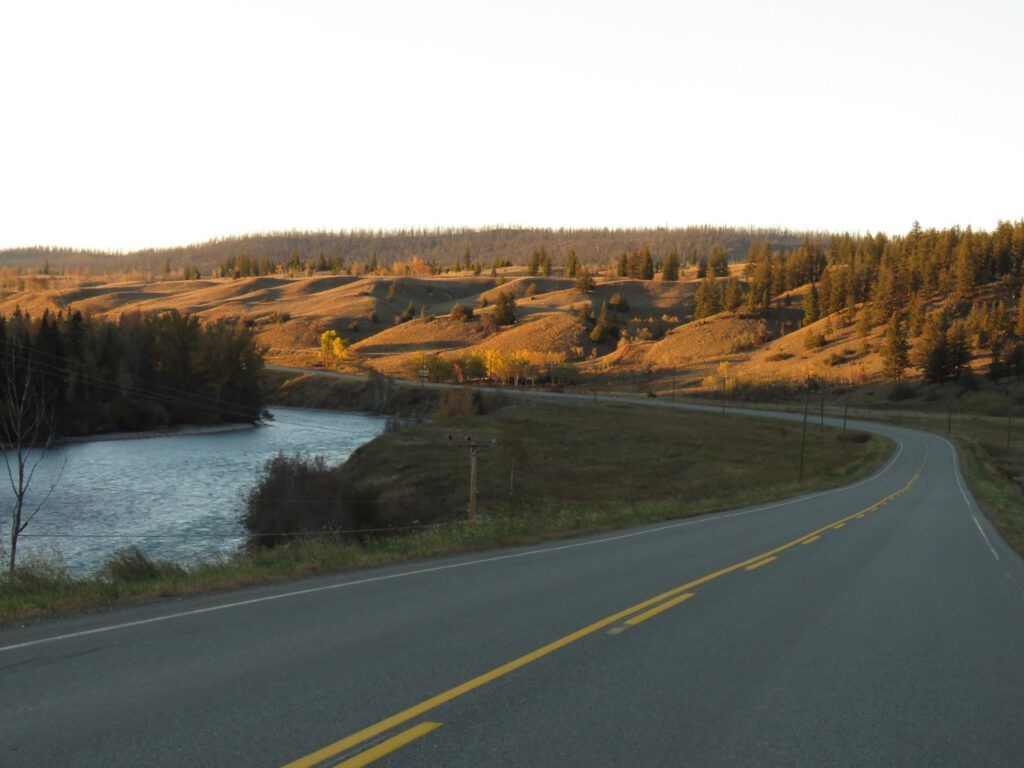 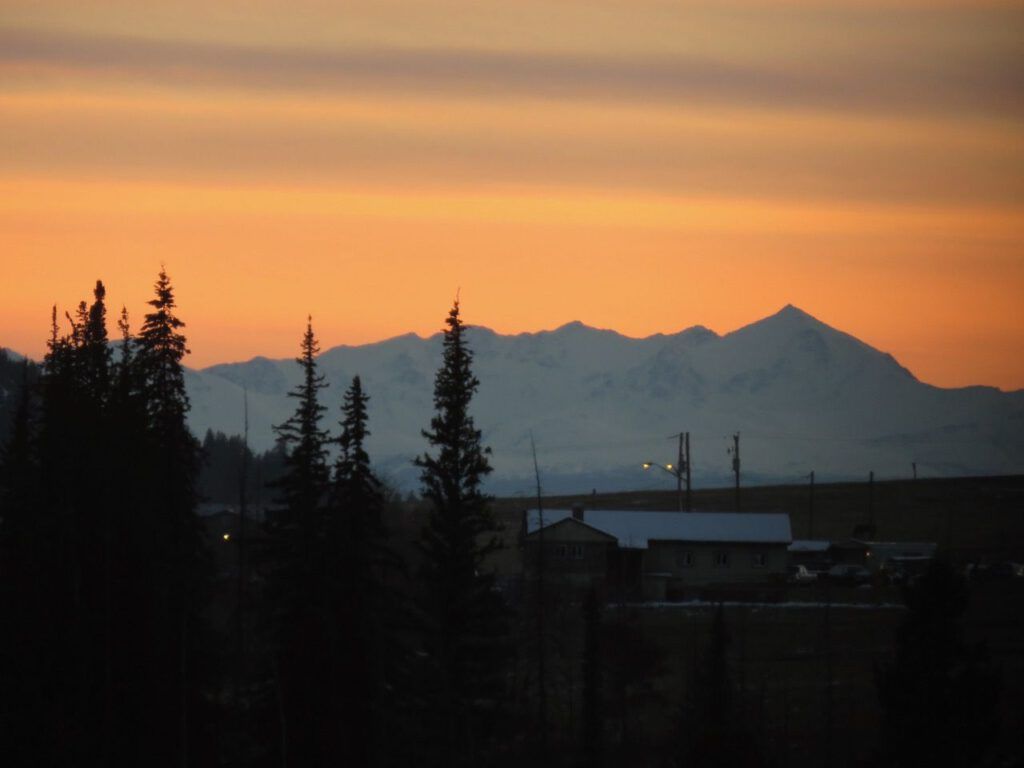 A few days later, I drove back to town with Friedi – fortunately he had a viable license – and he took the truck home, and I brought the van.  Not long after that, we were driving in the truck on a gravel road in four wheel drive – and a horrible grating noise happened.  Probably the transfer case – it works fine in 2-wheel drive.  Transfer cases may cost $5000.  I can’t afford that so will have to keep the truck off winter roads and use chains where necessary.  All this happened in the space of about 10 days.  During that time the phone and Internet went off as well – and the generator refused to start.  Friedi and I were creeping about by flashlight at night to save power.  I can live without power for most things – but need electricity for my freezers.  The generator was in the back of the truck when it was towed to town.  An expensive couple of weeks!