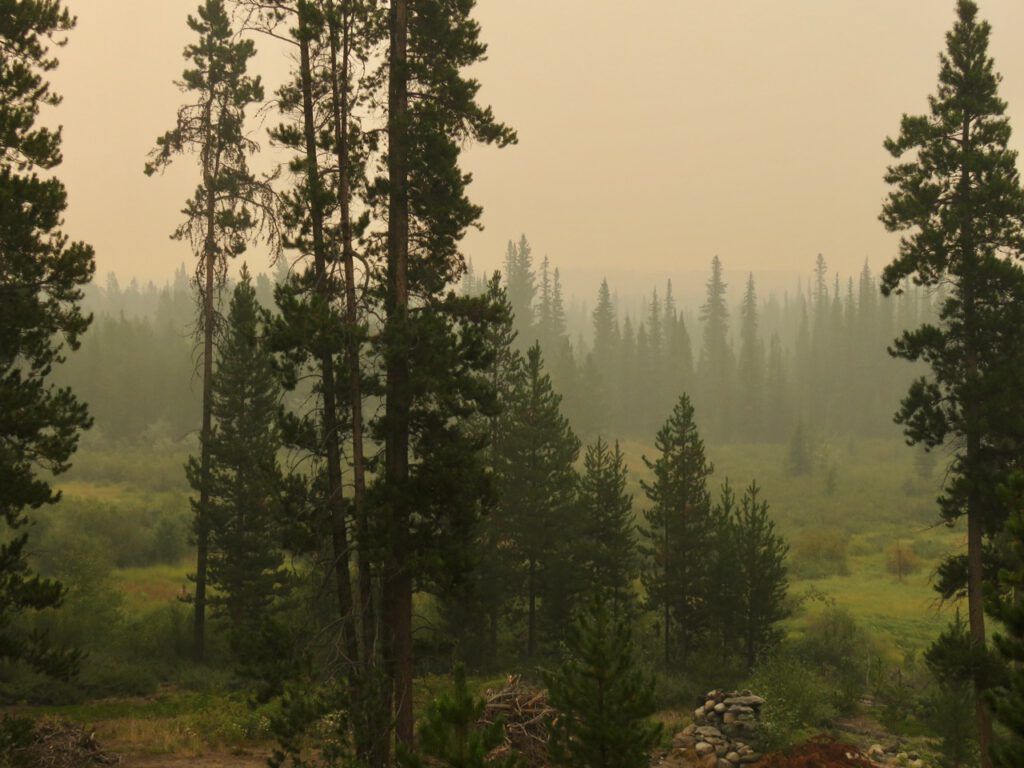 The last 3 weeks of August were filled with smoke.  In some ways, I think it was worse than last year because we had virtually no wind.  Last year was a lot more scary  (several posts in all).  But this year, the sheer monotony was depressing.

Some are saying that this is the third worst fire season in BC.  Last year was the worst, 2009 the second worst.  My place, on the map below, is half was between the first C in Cariboo Fire Centre and the western border – you can see that we were incredibly lucky.  Red is new fires, orange are older ones still burning.  The splurge in the northwest records evacuation orders and alerts. 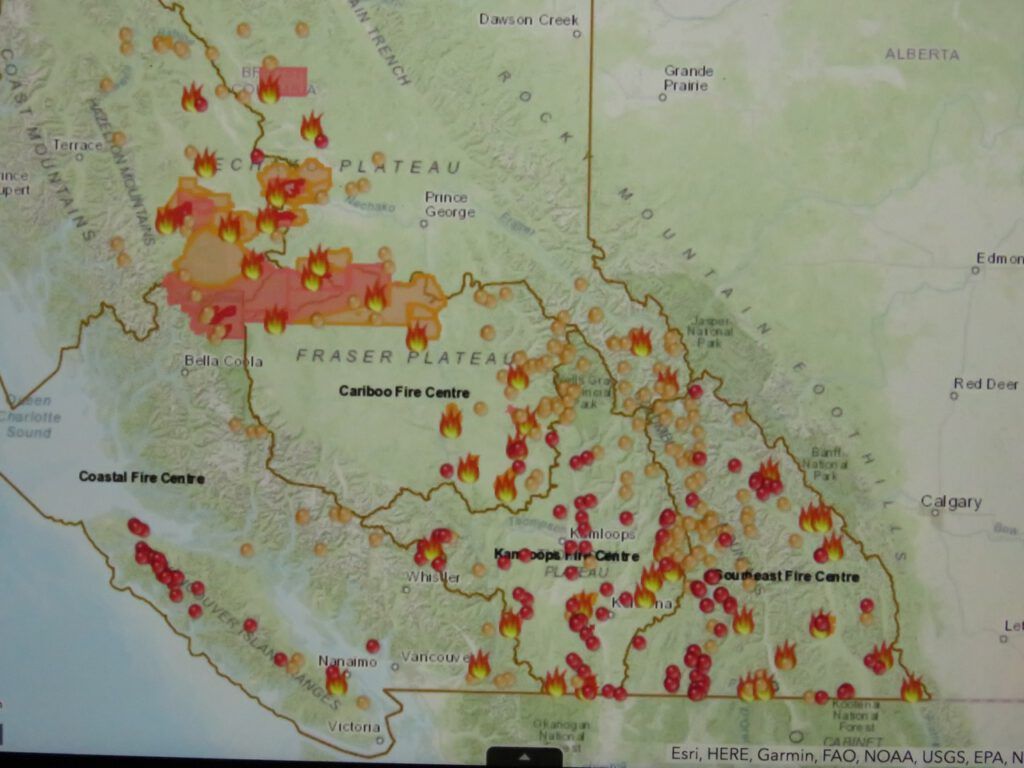 The fires that have given me the most smoke are the cluster of orange balls forming the lower point of the triangle between the C in Cariboo and Bella Coola.  Southwest winds dominate, and these fires were down the Klinaklini River, which runs right past Finger Peak in that direction.  Here was the Google Earth fire map on the 19th August.  (My place is the thumbtack.) 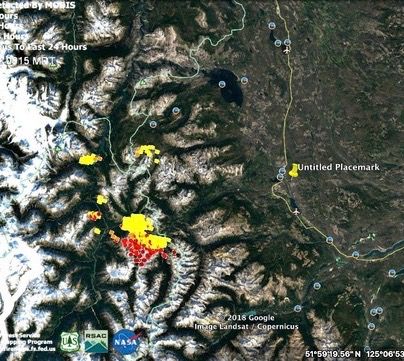 Google Earth Fire overlay records only 6 days activity.  Red is new, orange is older, yellow is 6 days old – so the fires may have started in other areas that are not recorded.  The two smaller, mostly yellow blobs north of the Klinaklini fire are actually threatening Nuk Tessli.  (The little blue dot just north of the right-hand fire.) Here is a more updated version (2nd September)  – you can see how the fire has spread north and climbed to the treeline in a couple of places. 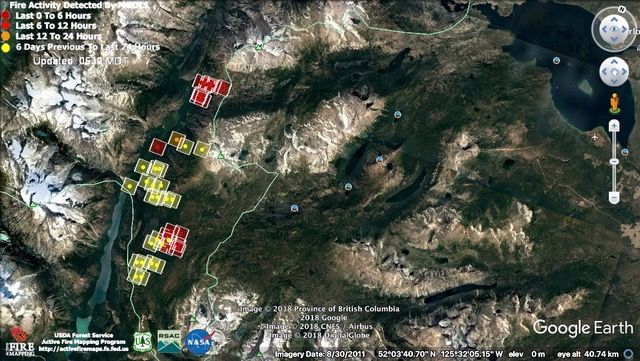 For a while, Nuk Tessli was under evacuation order so all tours had to be cancelled.  The owners say that crews came in and built a fireguard round the place and set up a network of sprinklers.

Smoke plagued most of BC, and also spread into the States.  Global news put out an article about a Spokane man who was so sick of the smoke in his city he suggested, on Facebook, that everyone should  get together on the same day and put fans on their roofs to drive the smoke back to Canada.  However, a later news report said the man only wrote it as a joke and he could not believe how many people actually thought he was for real.  (Including Global News, it would appear.)

There were the usual red suns in the smoke. 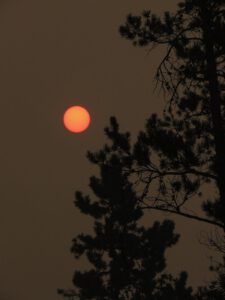 Many days I thought it must be cloudy as the mornings were so dark, but then I became aware of the sun already high in the sky.  Sunlight cannot penetrate the smoke at ground level; it is visible only when it is high for then the distance it has to get through is thinner. 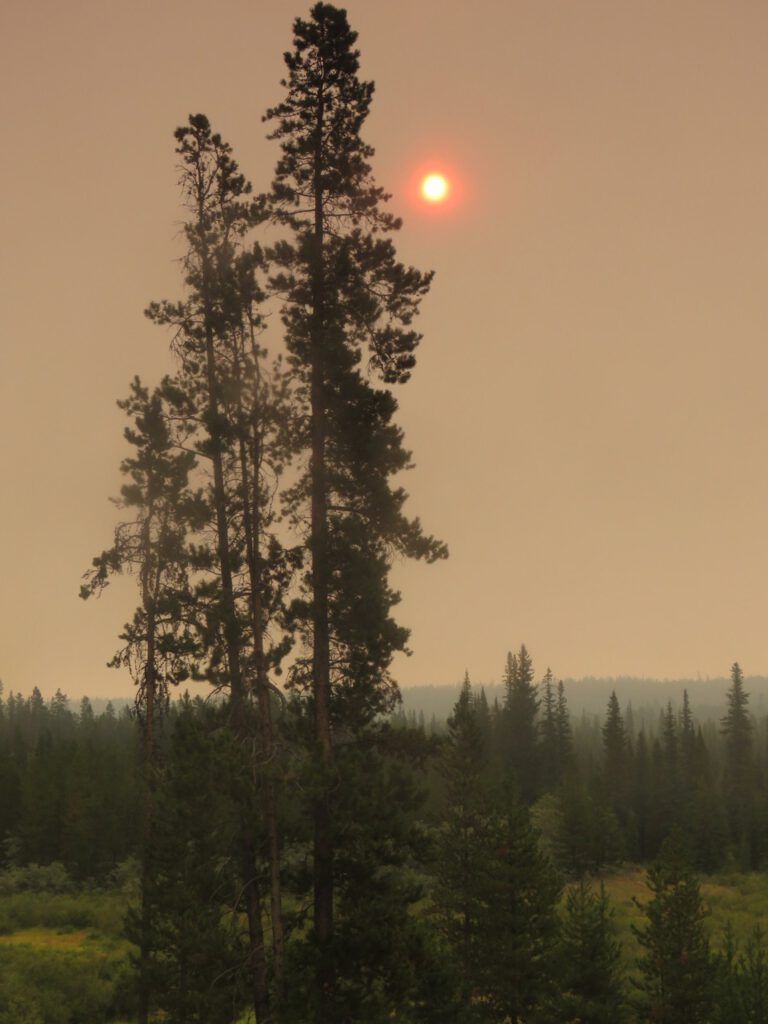 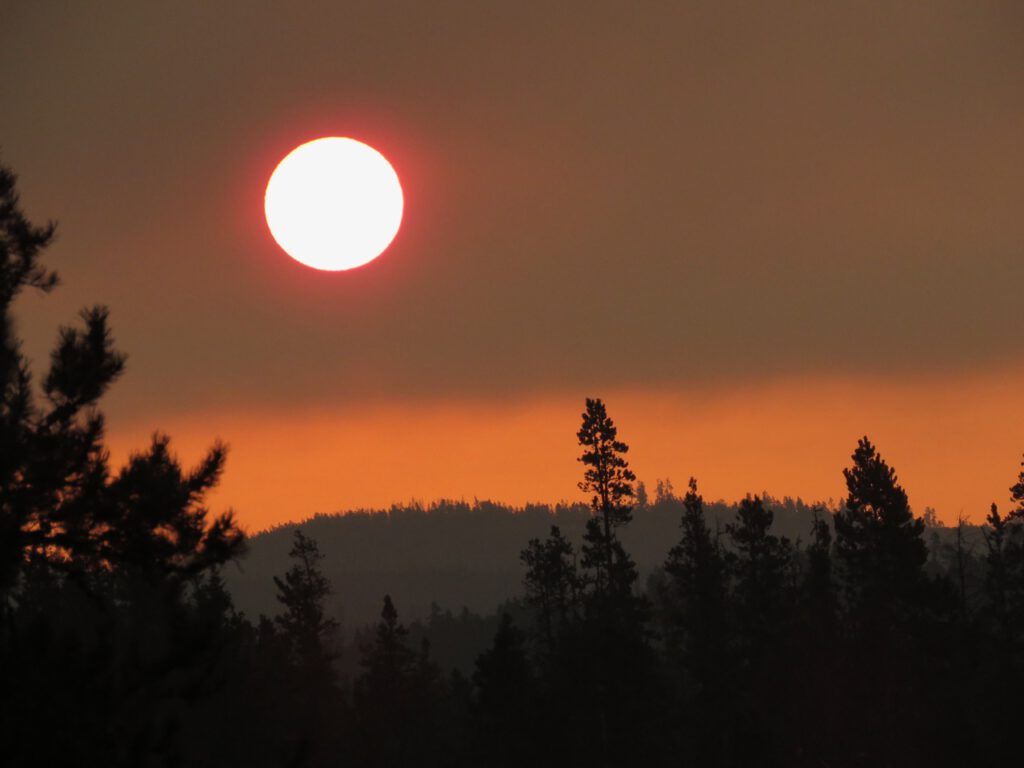 One evening the sun dissolved while still quite high. 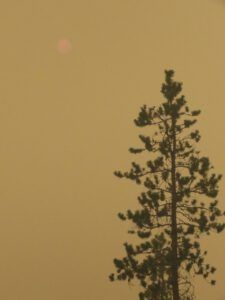 And then we had the most weird three hours before dark.  Breathing was unpleasant, and by 6.00:pm, 2 and half hours before normal, I had to turn the light on to read (and prepare vegetables.) I was very close to leaving.  The light turned a creepy yellow. 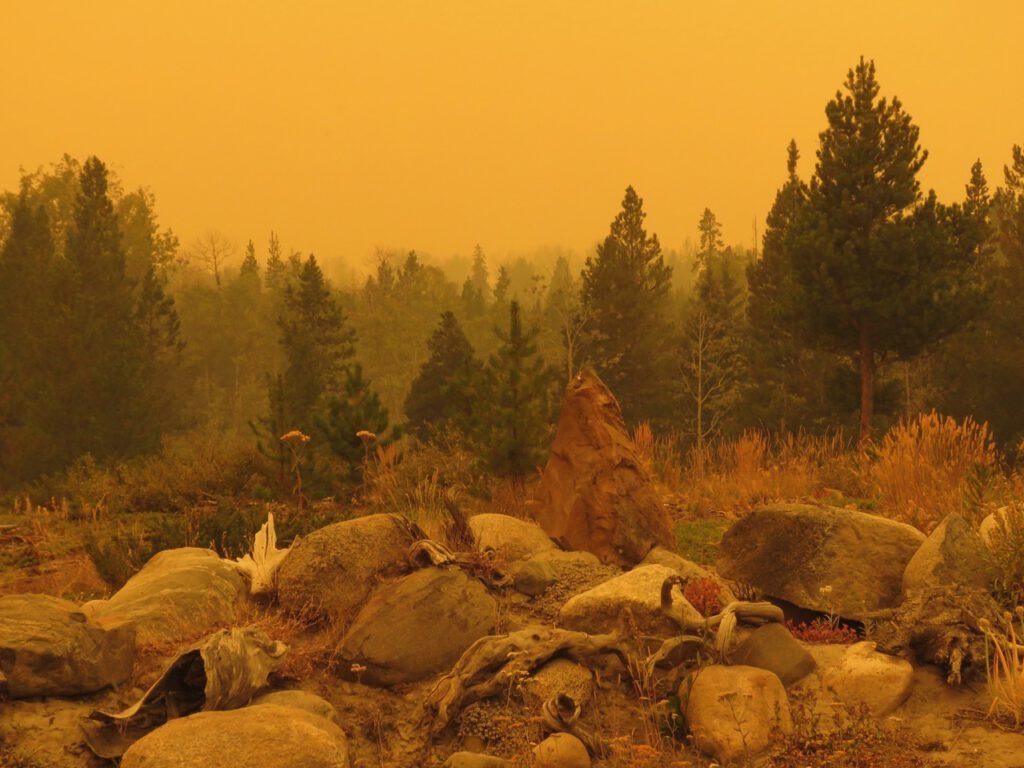 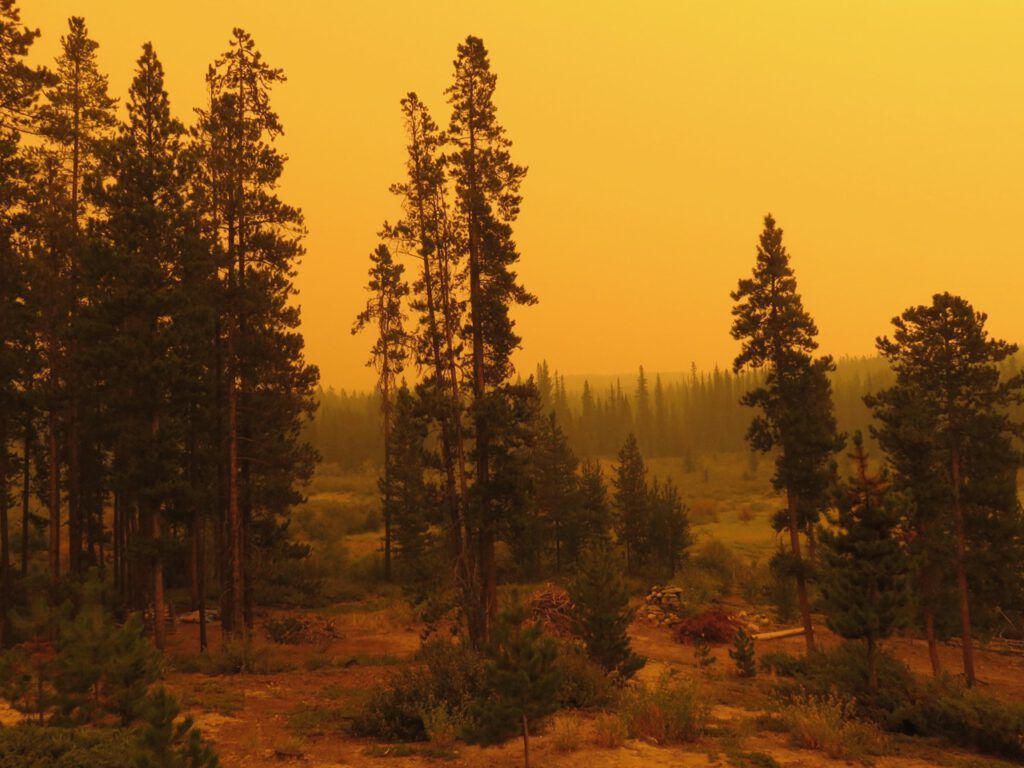 And then an even more creepy orange. 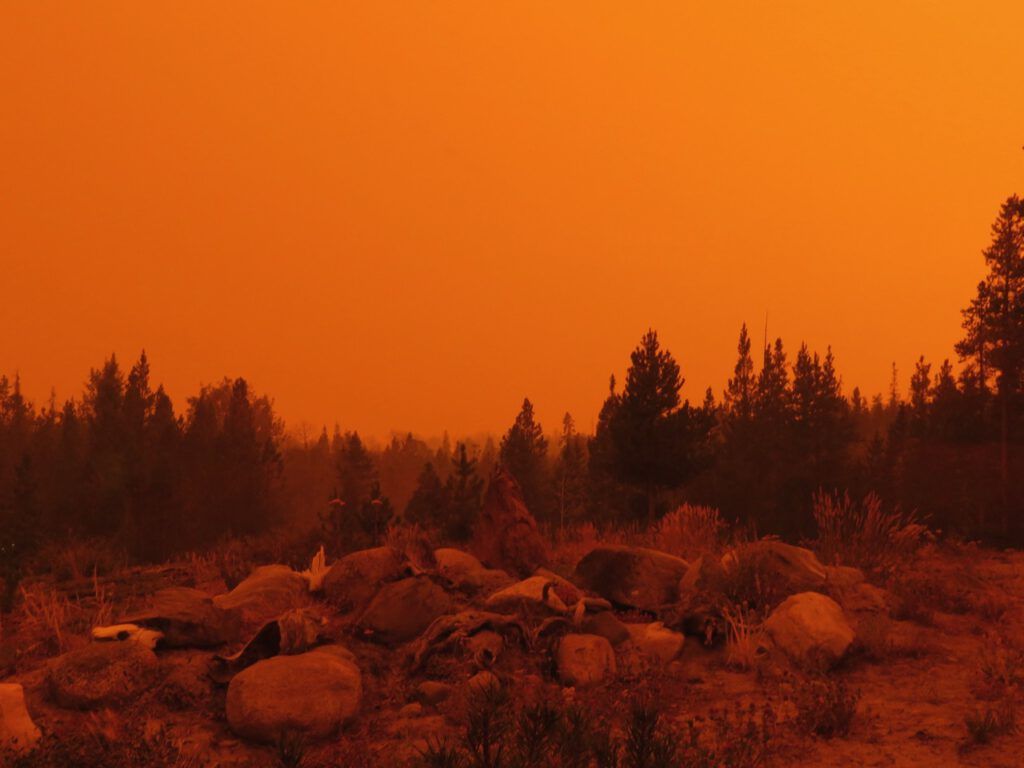 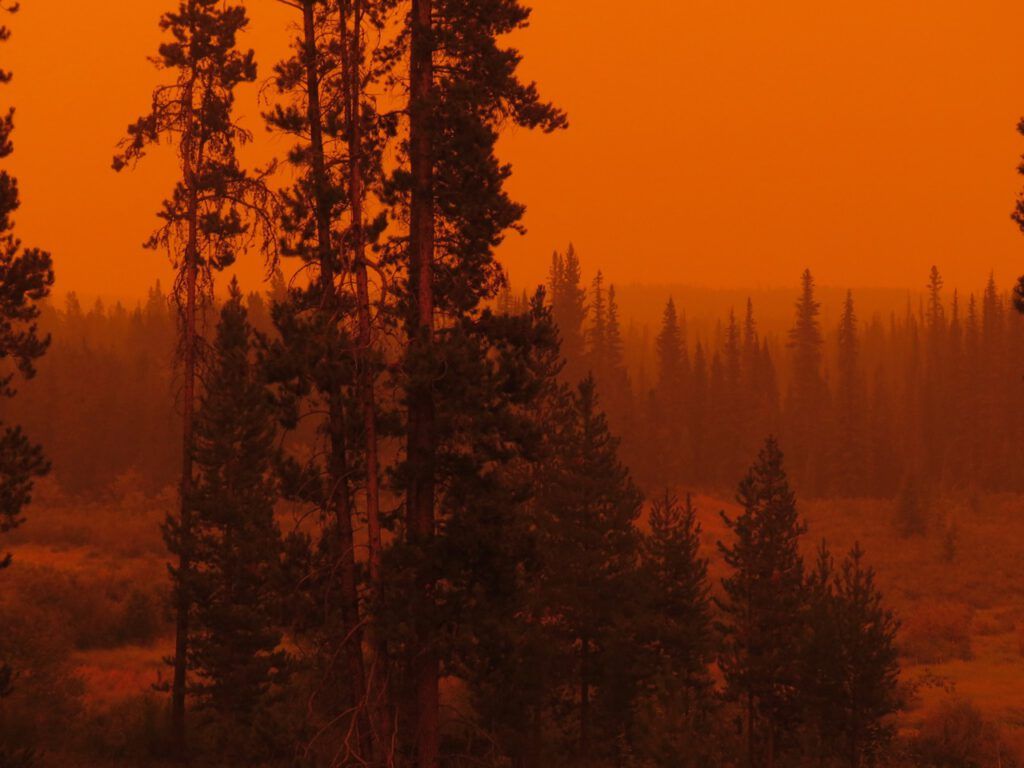 During the night there was an ash-fall. 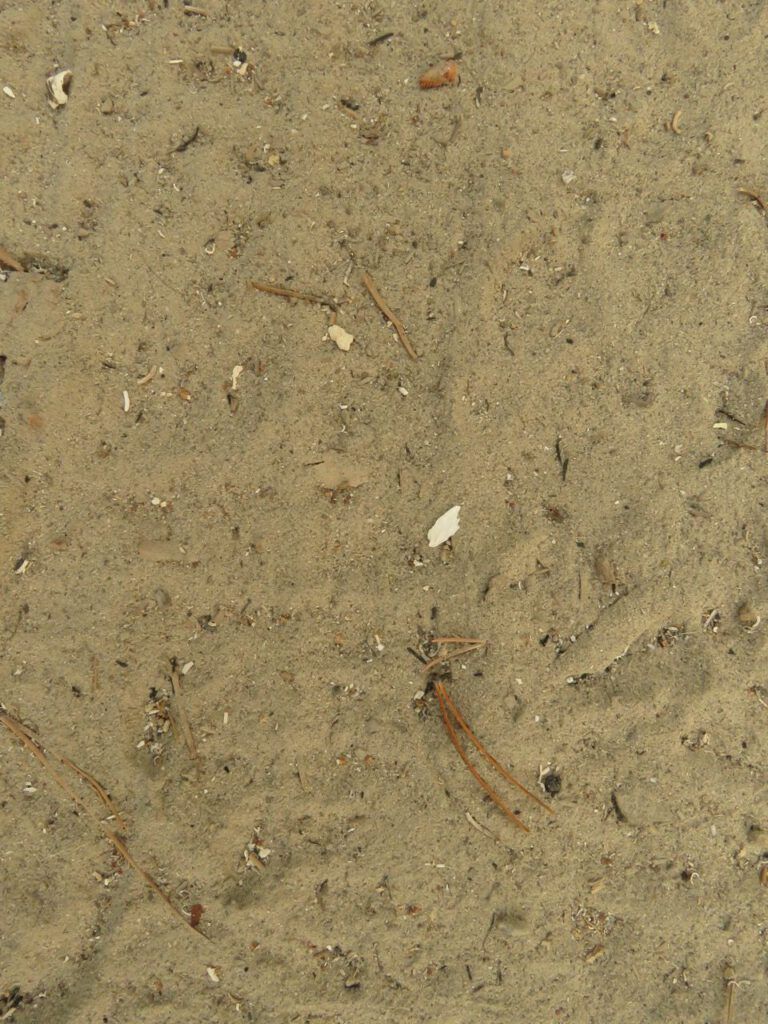 One afternoon it was a little clearer around my buildings, but the smoke was still thick in the west.  Cloud must have been behind it and we had some great ray effects. 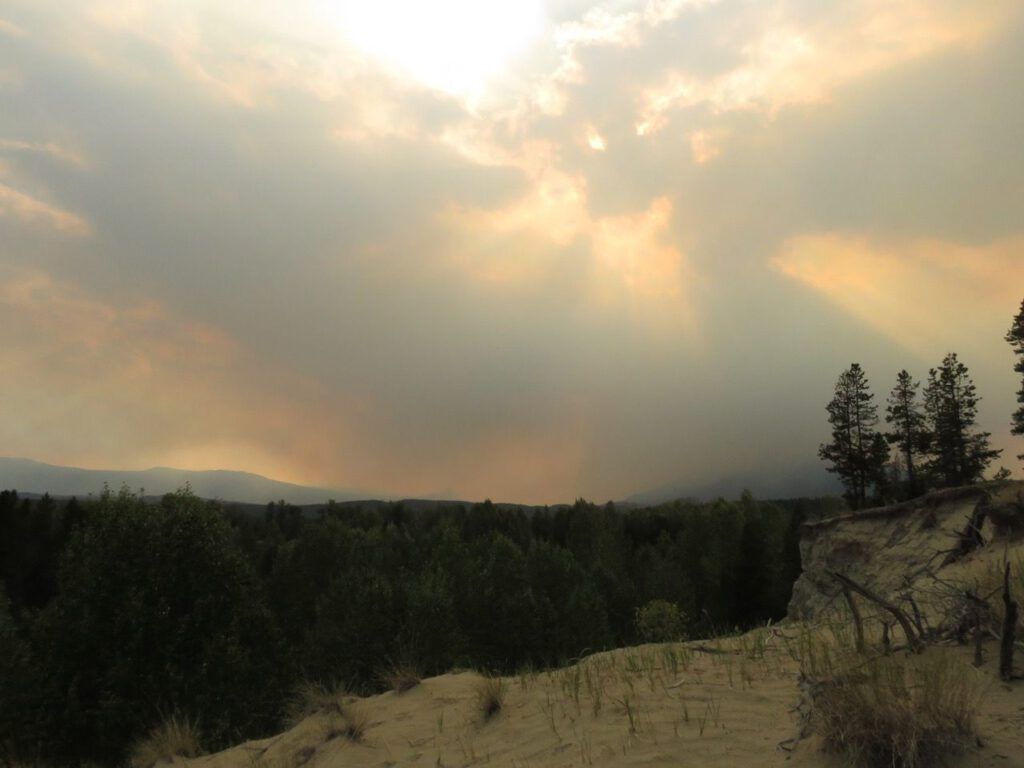 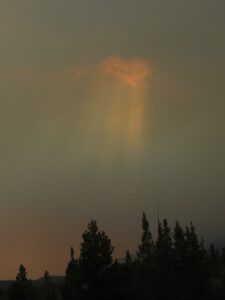 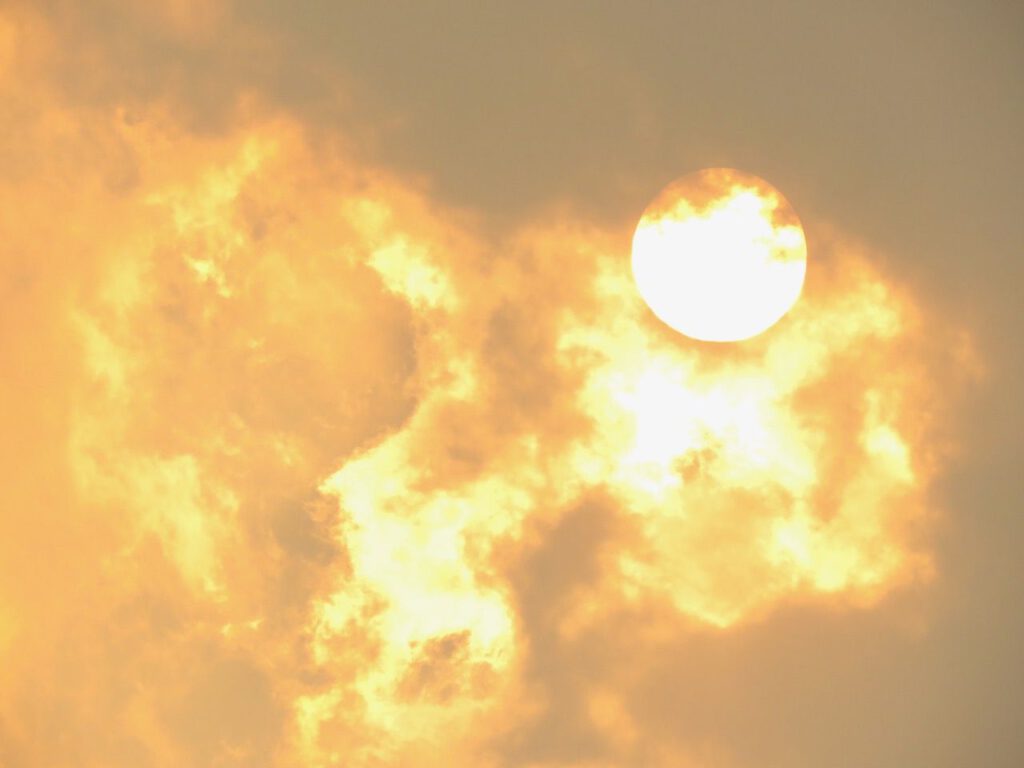 At the time of the full moon, the smoke shrank back towards the mountains (but still hid them.) 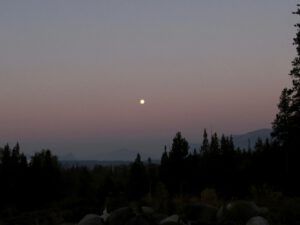 There was a clear sunrise. 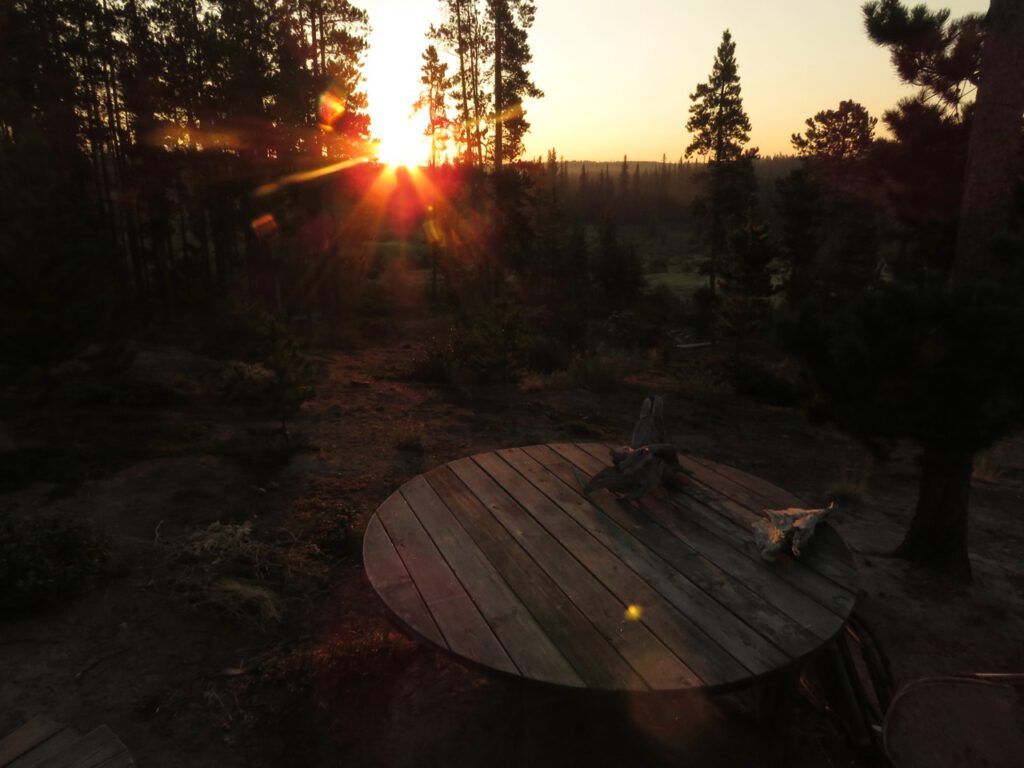 Colours were so sharp and startling after this unremitting brown. 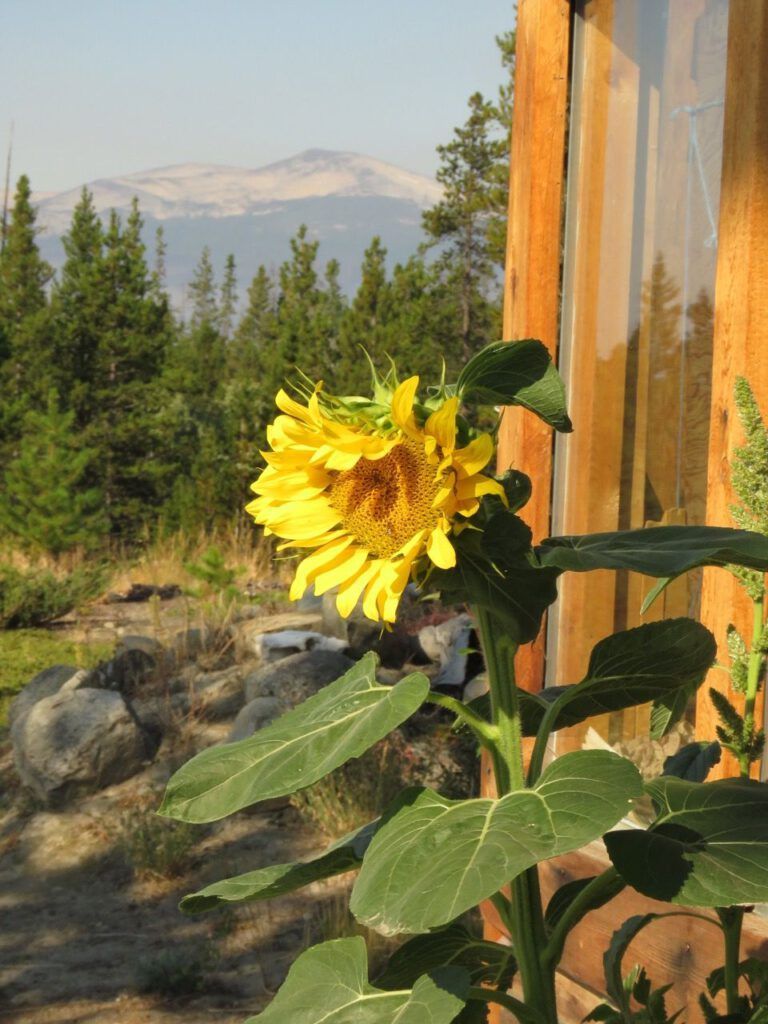 This sunflower was planted by the birds.  It has grown directly beneath where I feed them in winter.  During the smoke, it never moved.  Just stared at the ground.  Friends said their chickens would not get out of bed and have all gone off the lay as a result.  Other friends say the same thing happened with her bees.  They stayed inside and ate the honey crop.

Every morning, Mike King of White Saddle Air, flies to the fires, and every evening he flies home again. 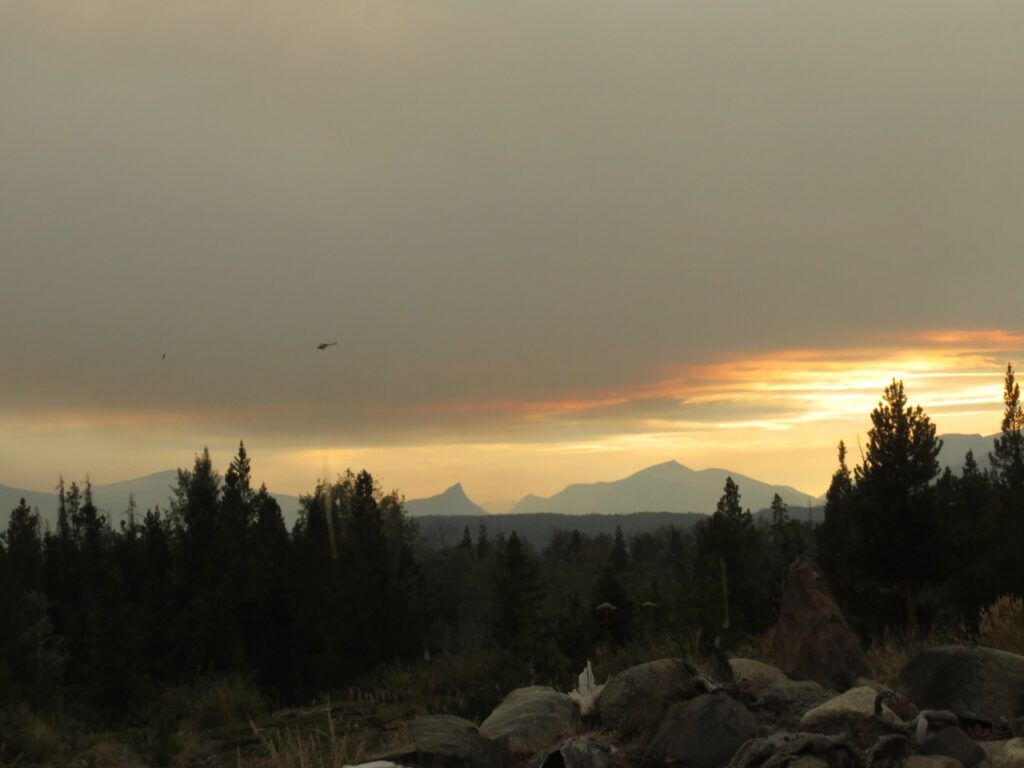 The smoke soon built up again. One evening we had another weird light display. 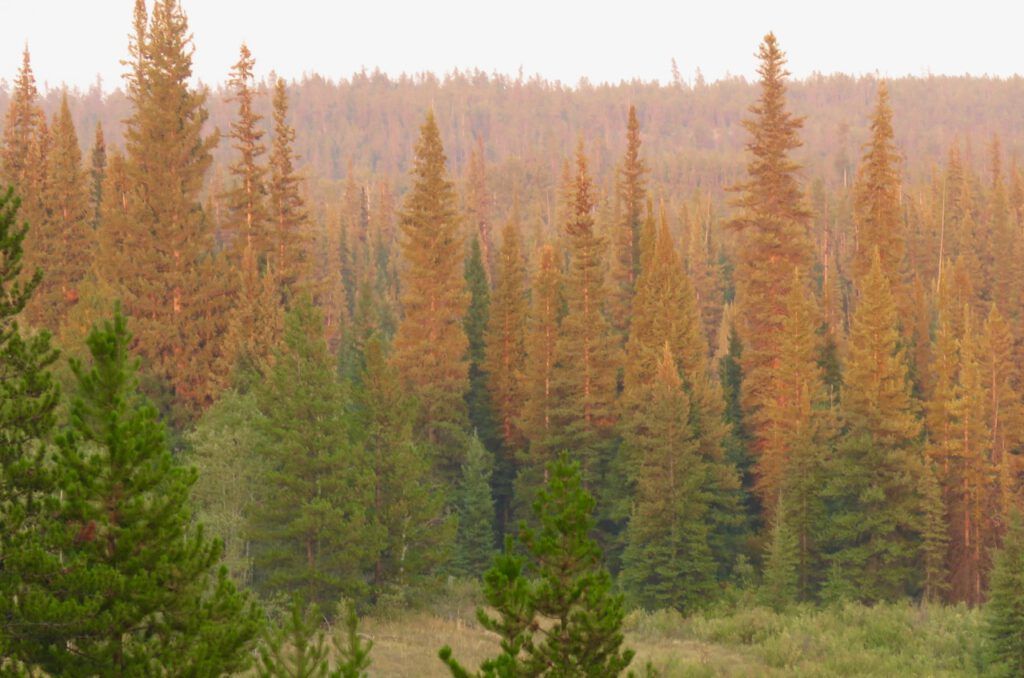 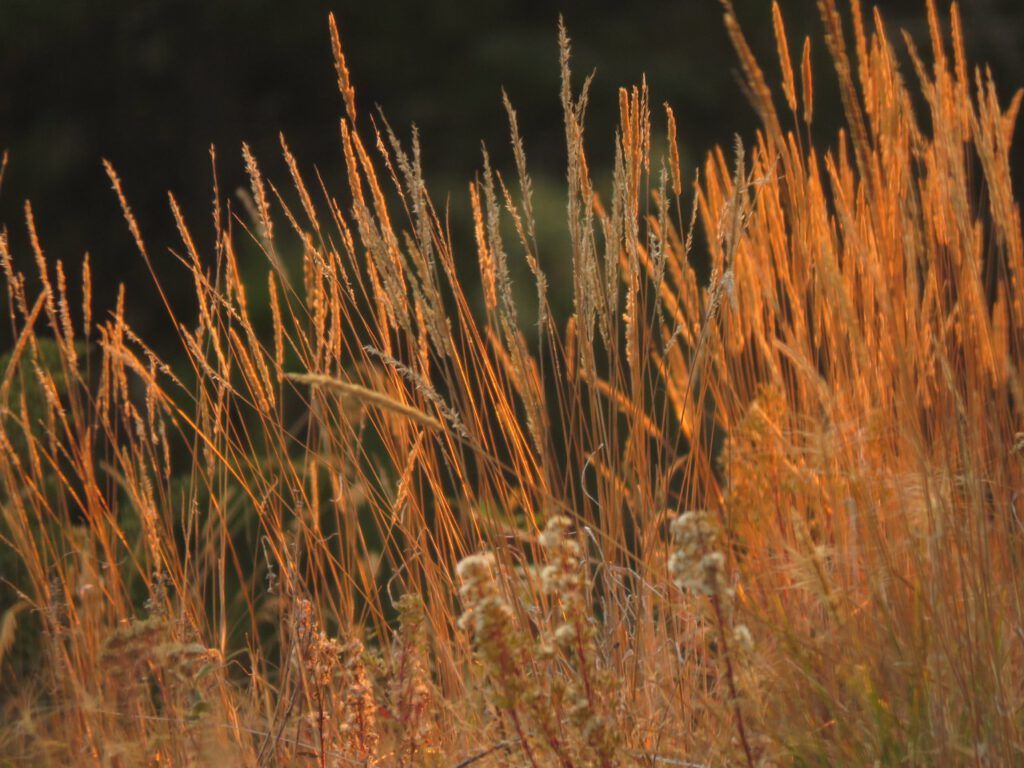 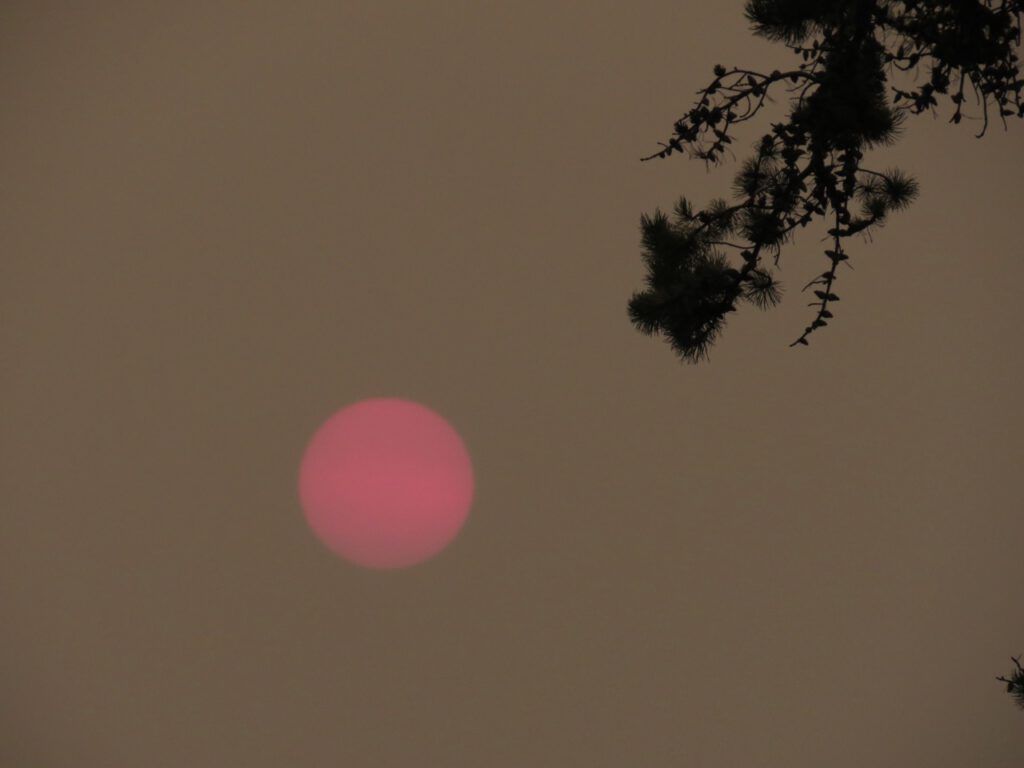 One might think that the smoke is entertaining with all these dramatic light effects.  But mostly it is just very, very boring. 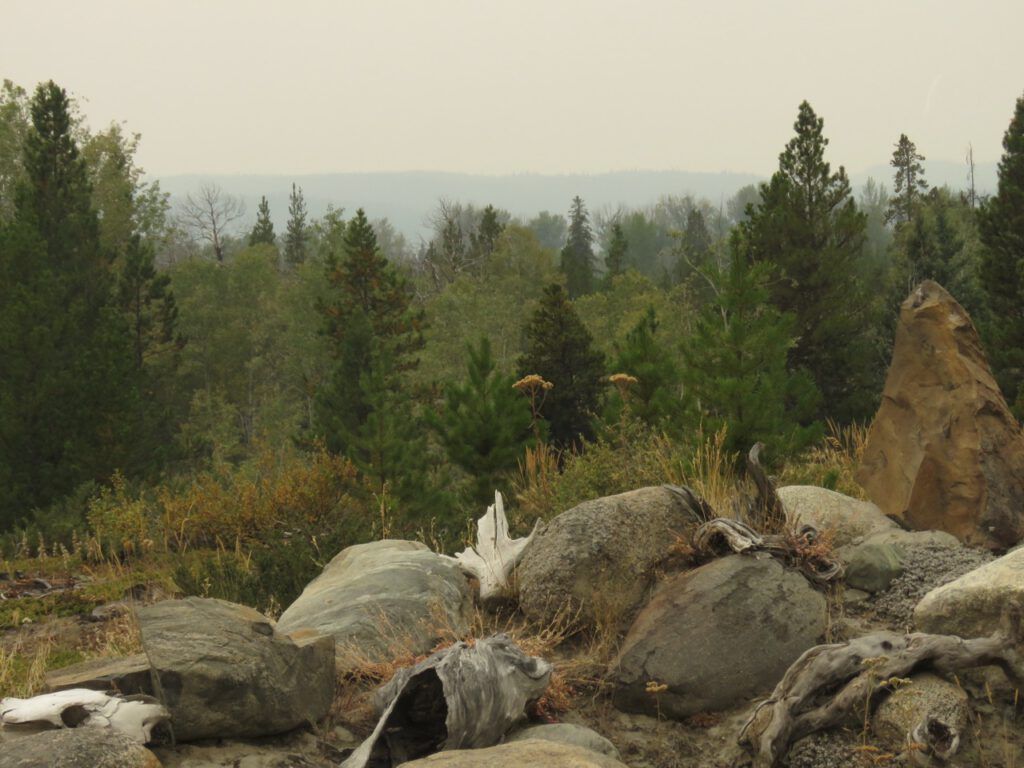 One thought on “Smoke”