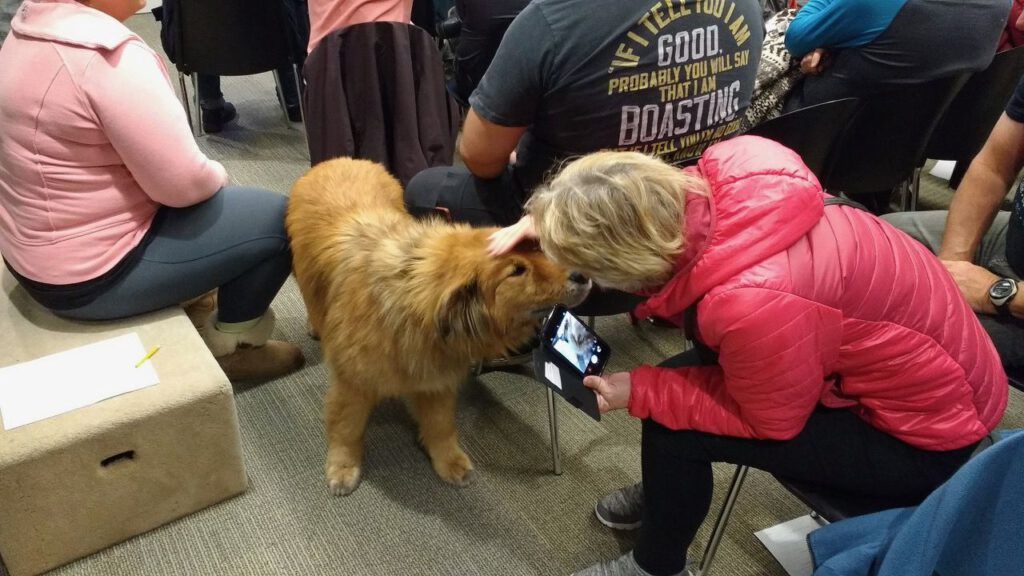 I LOVE being famous!  Everyone makes a tremendous fuss of me, gives me treats, and I have been interviewed for a couple of radio stations and numerous newspapers.  Each of these had a different heading but my favourite was: Wilderness Dog Tells All.

My favourite radio programme was Sheryl McKay’s North by NorthWest on CBC radio, Saturday October 21st.  (If you don’t want to listen to the whole programme, go to 1:45:30.)  The famous Lonesome was interviewed by Sheryl as well.  Sheryl is as charming and attractive in real life as she sounds on the radio – which, Chris has often said, is not the case with all interviewers!

I have even been on TV!  Fortunately a friend drove us in Vancouver’s pouring rain to the Rogers’ Studio in downtown Vancouver.  We found the interview somewhat surface and fluffy, but the interviewer did say afterwards that he’d never had such well-behaved dogs on the show.

But I get ahead of myself.  Here is a brief summary of our journey.

We left home on the 30th September.  Chris had no vehicle maintenance that needed to be done and so we had the luxury of driving in daylight.  The fires were still puffing away in downtown Kleena Kleene.  The haze in this picture is smoke rather than fog, and you can see a bit of a more active burn on the high ridge. 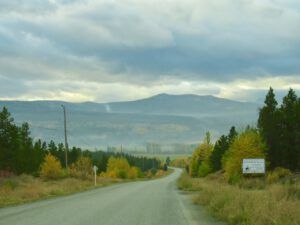 The rest of the journey to Williams Lake, however, was through the most spectacular fall colours Chris had ever seen in the area. 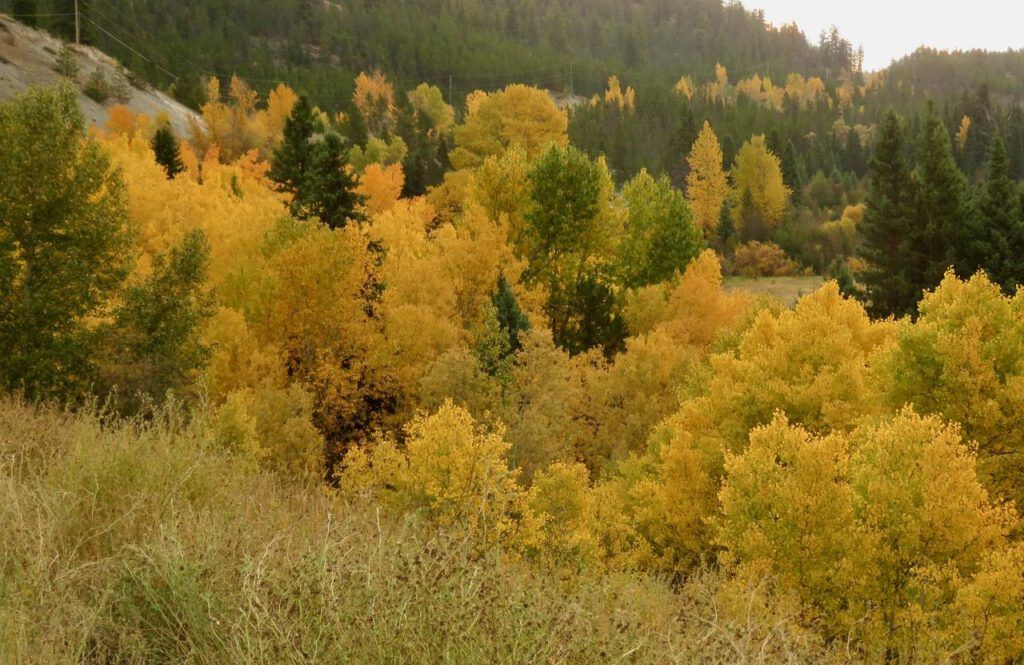 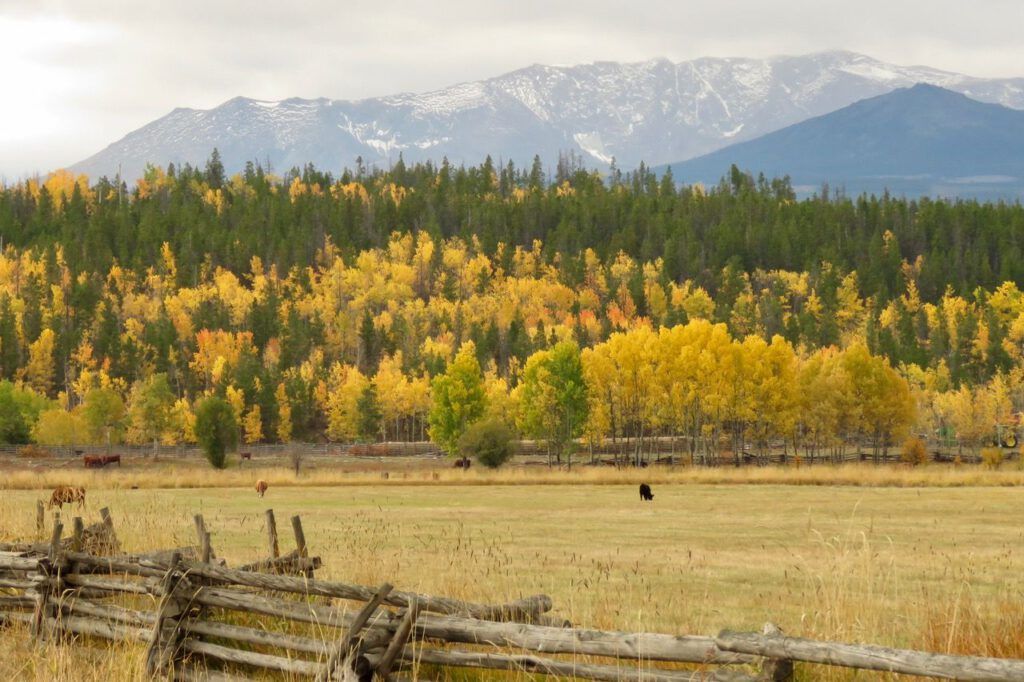 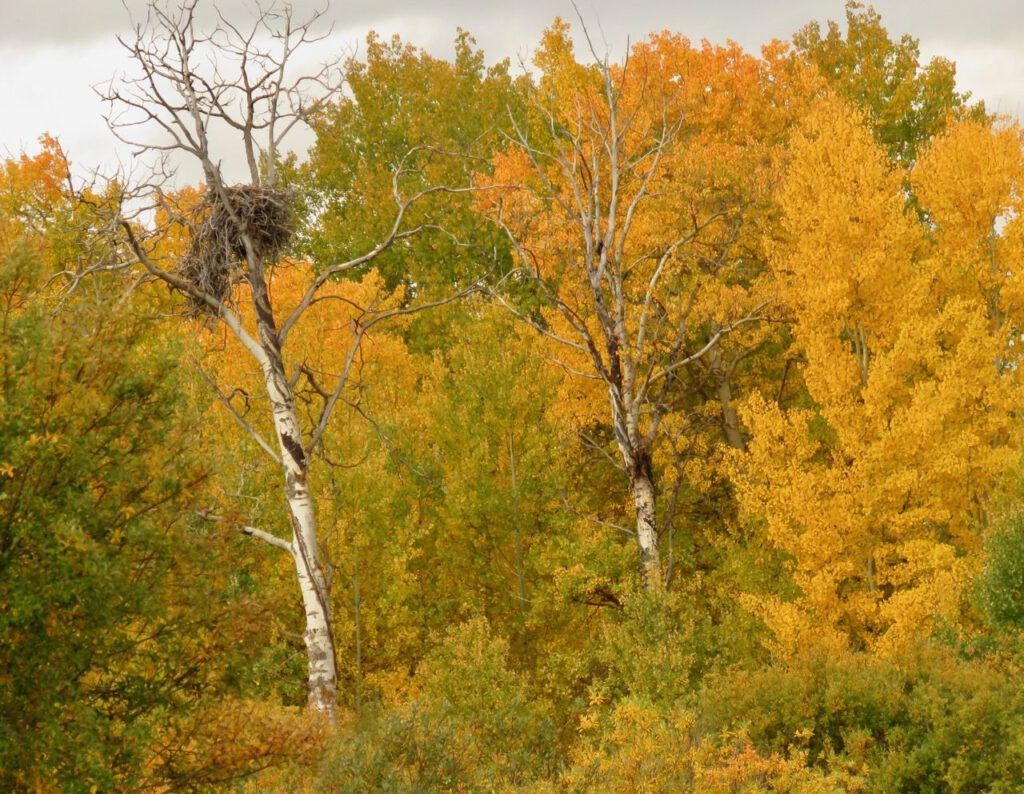 It’s not every year we have red aspens, but there were a lot this fall. 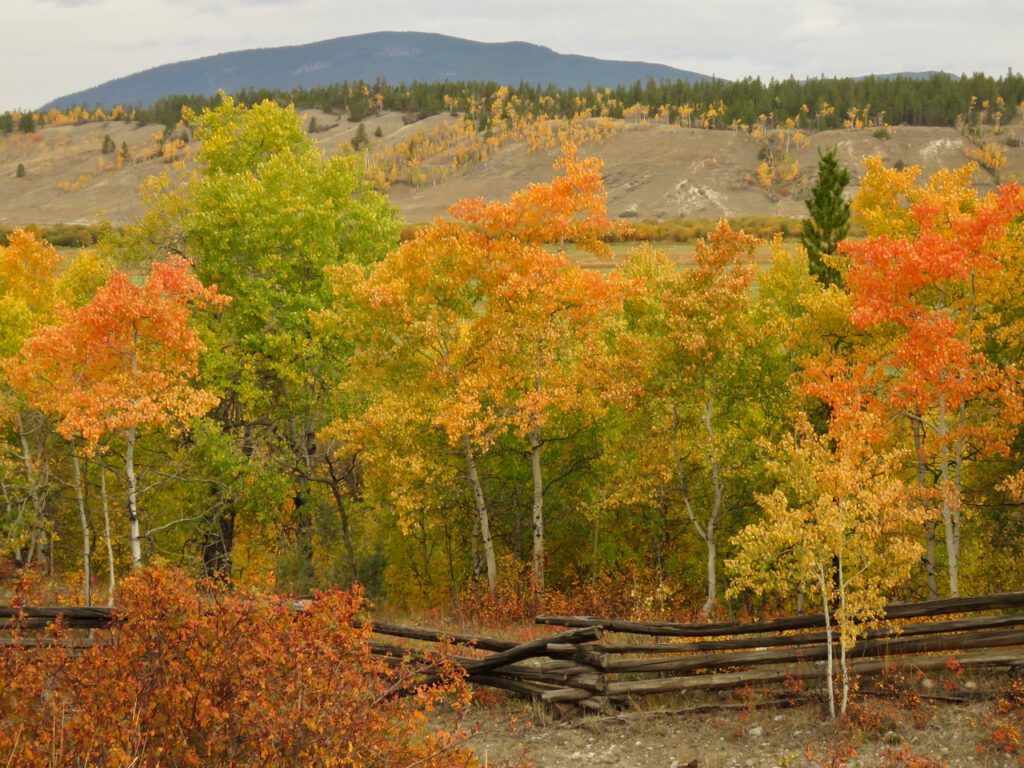 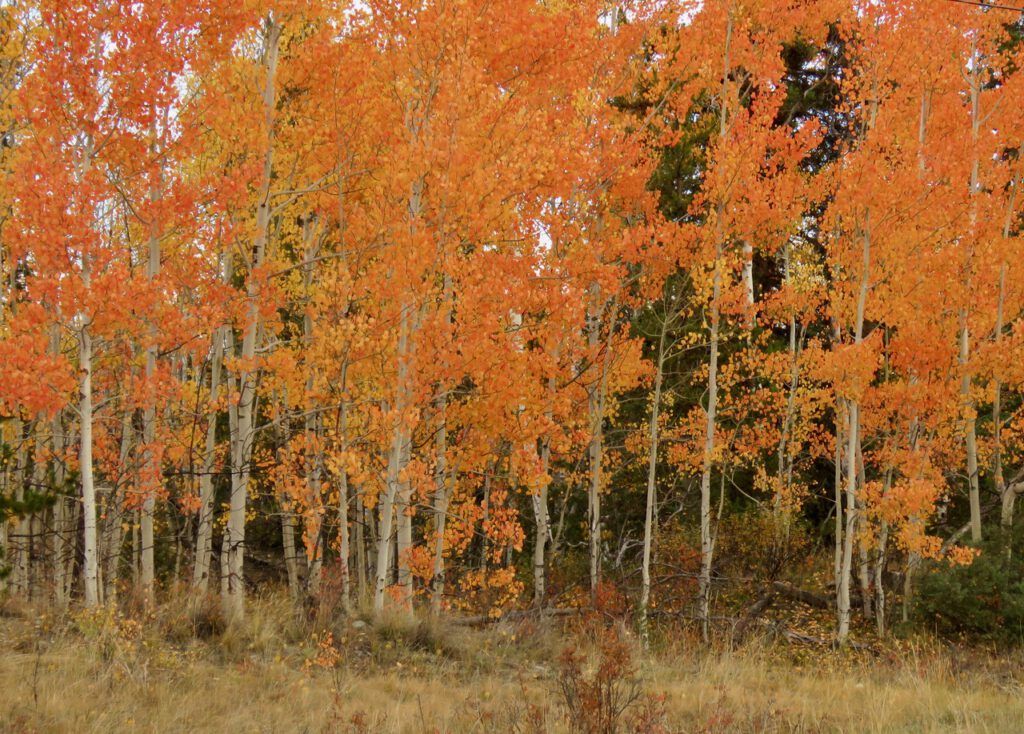 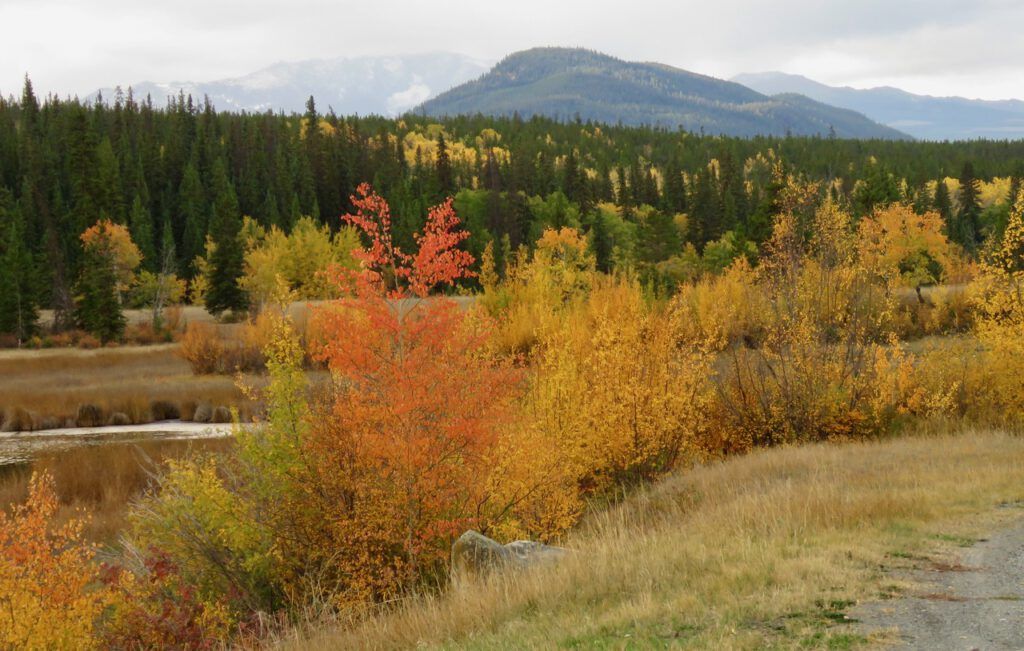 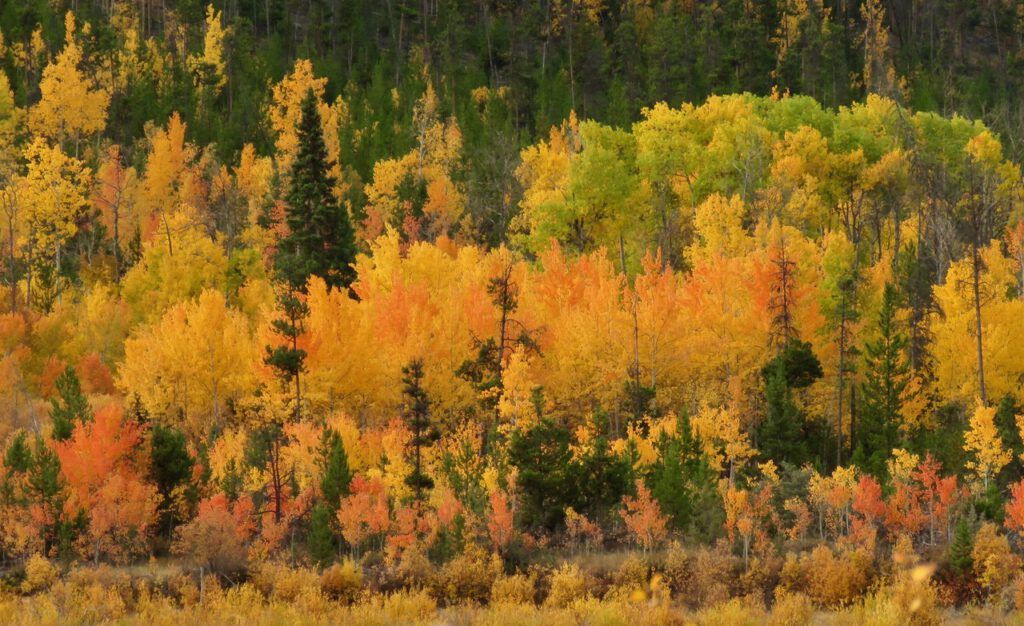 The graveyard at Tsi Del Del (Redstone reserve) was ablaze. 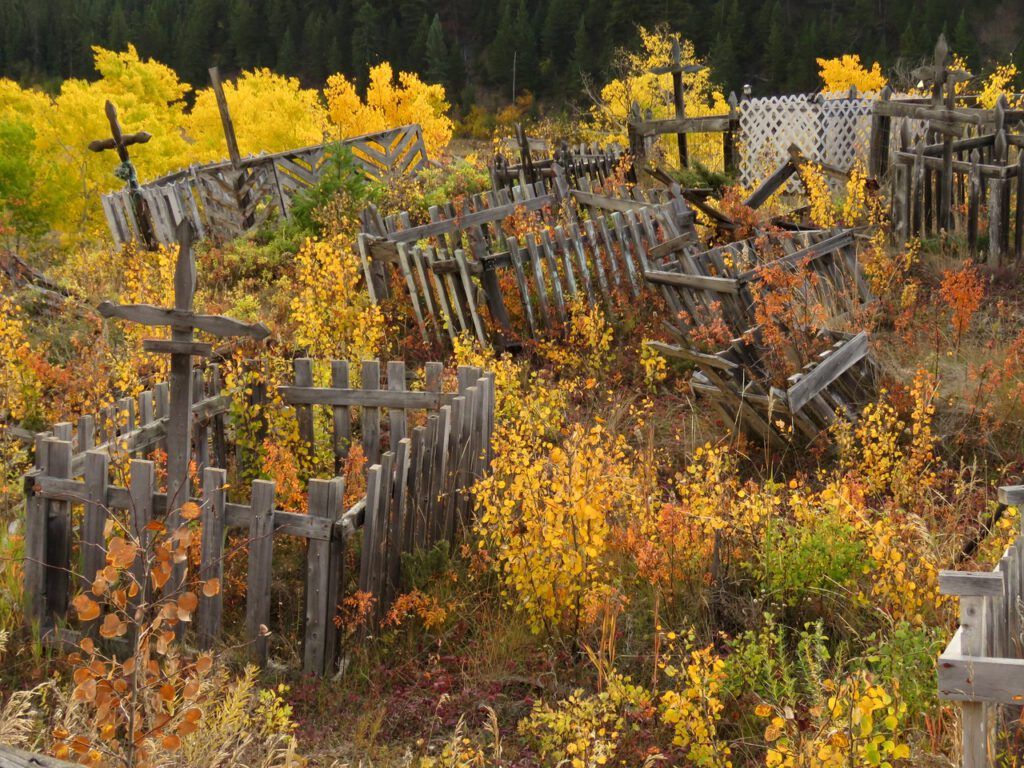 An hour from Williams Lake, we ran into the burned areas. 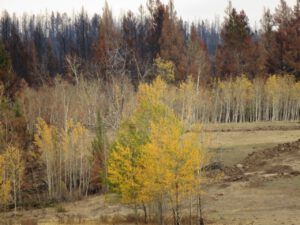 We spent the night with a friend in 108 Mile House, then continued south the following morning.  Much evidence of the fires accompanied us almost all the way to Spencer Bridge, where we finally drove out of them.  We stopped there to visit my original rescuer, the Lady of Paradise Yard, in order to give her a book. 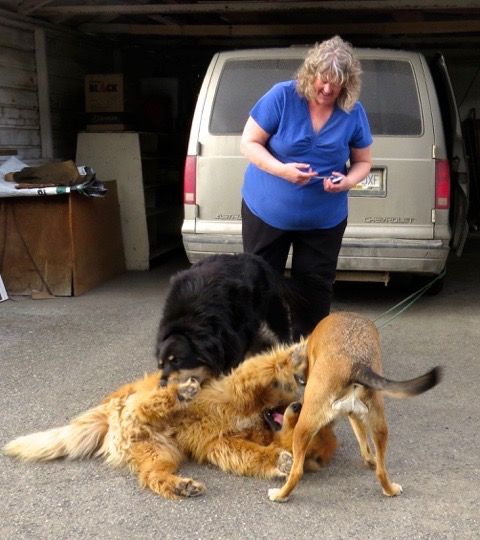 She is the person everyone contacts if there is a sick or lost animal of any kind in the area.  She works with a rescue outfit in Victoria to help her distribute the animals to new homes.  She invited Chris into her house.  “You want coffee?” she asked.  Chris shook her head.  “Tea? Something to eat? Kitten? Dog?”

On that second day we arrived in Vancouver, coasting down the canyon out of the dry weather and into the pounding rain.  The traffic had been stop and start for about an hour and a half on the freeway as there had been a major smash at our end of the bridge.  Nice welcome to the city. 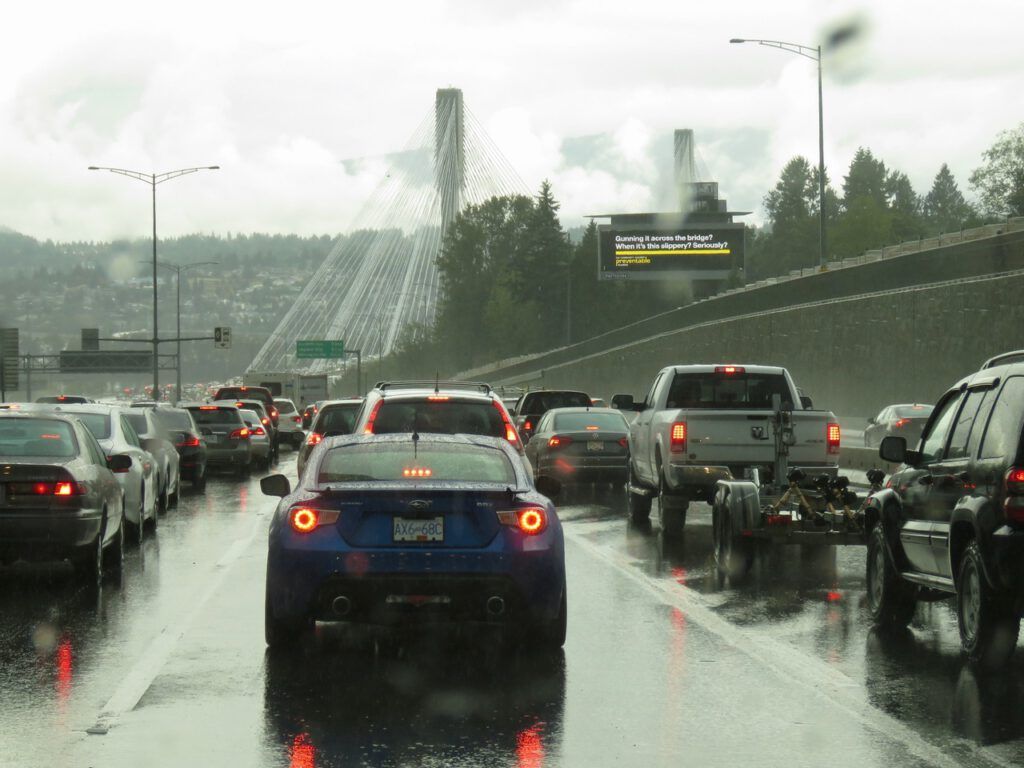 A night with friends in North Van, and then a ferry ride to the Sunshine Coast.  For once, the area was living up to its name.  Chris had rarely experienced weather like this down on the coast. 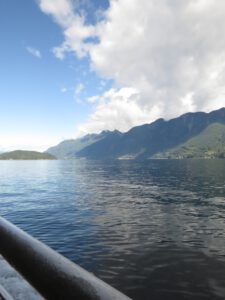 She was fascinated by the jellyfish swirling back and forth below the boat while it waited in the dock. 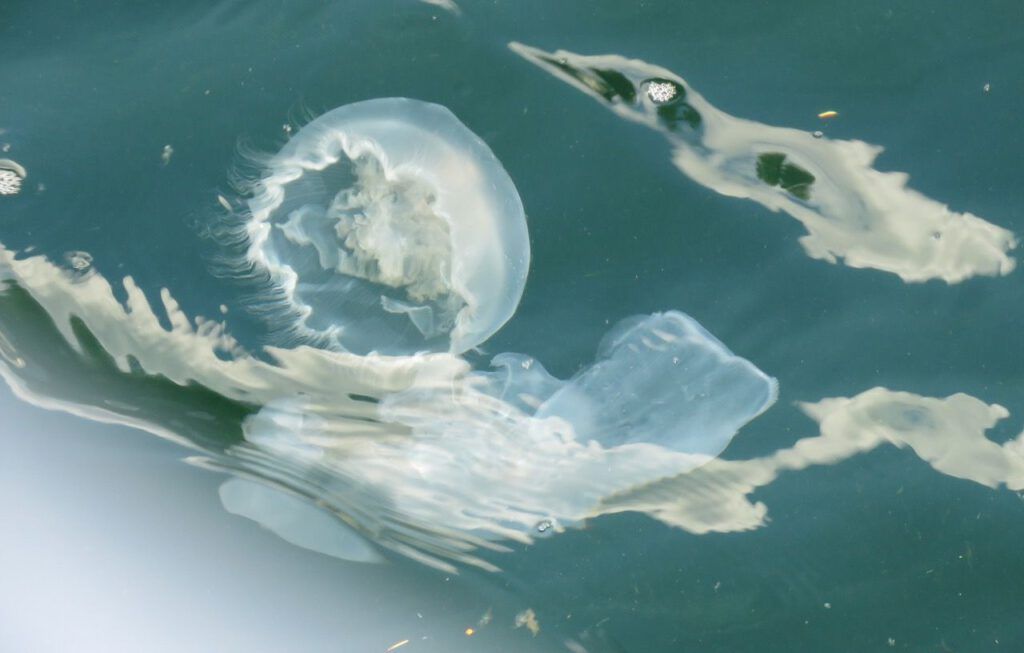 We had our first slide show in the Sechelt library.  Chris would not let us come in while she was speaking as she said no one would listen to her if we were there. 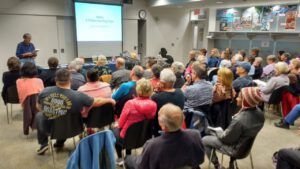 And it was true.  The minute Badger and I walked in the door, people had eyes only for us.  I was a real pro.  I got a head pat from the nearest person, then eased forward to the next while the first person stroked my back.  I worked my way round the whole room; often I had three people at once patting me.  Badger tended to flop down wherever he ended up, but he still got a lot of attention. 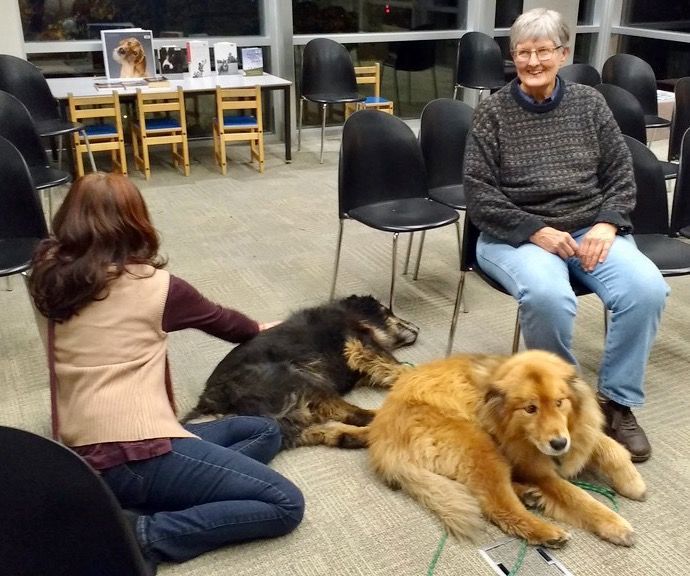 It was amazing how the book sales were boosted as soon as we walked in the door!

The following day we signed books at Madeira Park then caught the next ferry to Powell River.  It was another mill-pond calm day. 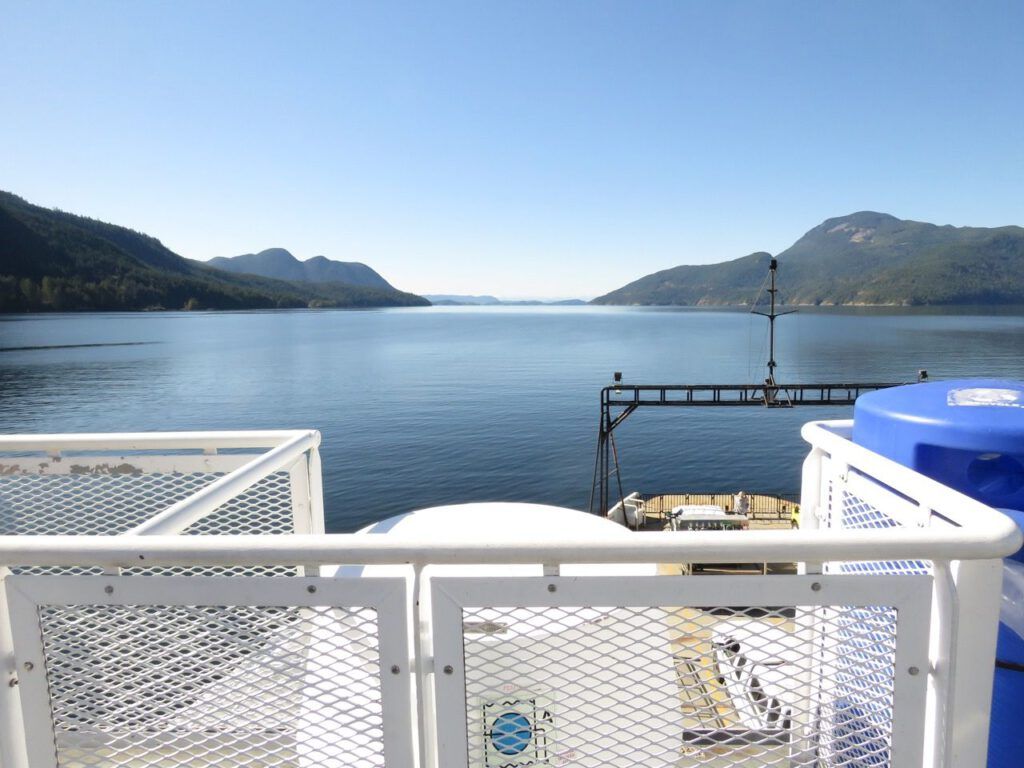 Our host was a lady we had never met.  She and her husband have a float cabin on Powell Lake but also a condo right near the wharf.  They actually live in California so are not full time BC-ers.  Margy’s husband, Wayne Lutz, has written and self-published may books about his coastal experiences.  He gave us: Up The Lake,  which Chris read with enjoyment.

Unfortunately we did not have time to visit the float house as we were going to speak at Courtenay on Vancouver Island the next evening. We caught our third ferry just as the sun was rising and had another spectacularly calm crossing. 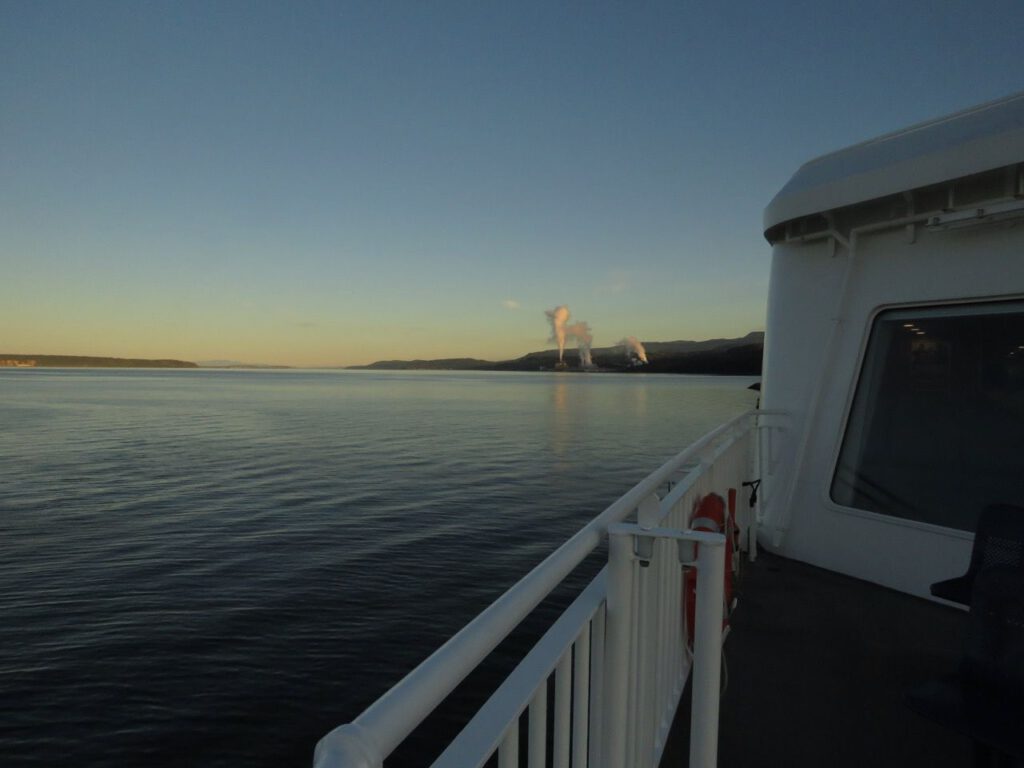 Union Bay is a little south of Courtenay, and friends there have a gallery to display their incredible clay, glass, metal and wood sculptures, and their wonderful bonsai garden.  It is worth spending time on their website: Seachange.  (Please note their email address no longer works!) Unfortunately a fast, busy road runs between them and the sea (good for business but not for relaxation) but once we crossed it, we walked on the beach known as the Coal Hills, a slag heap that is so poisonous that in large areas nothing grows, and a proposed massive “development” was thwarted.  Great for dog walks, though.  That is the mainland of Canada across the water. 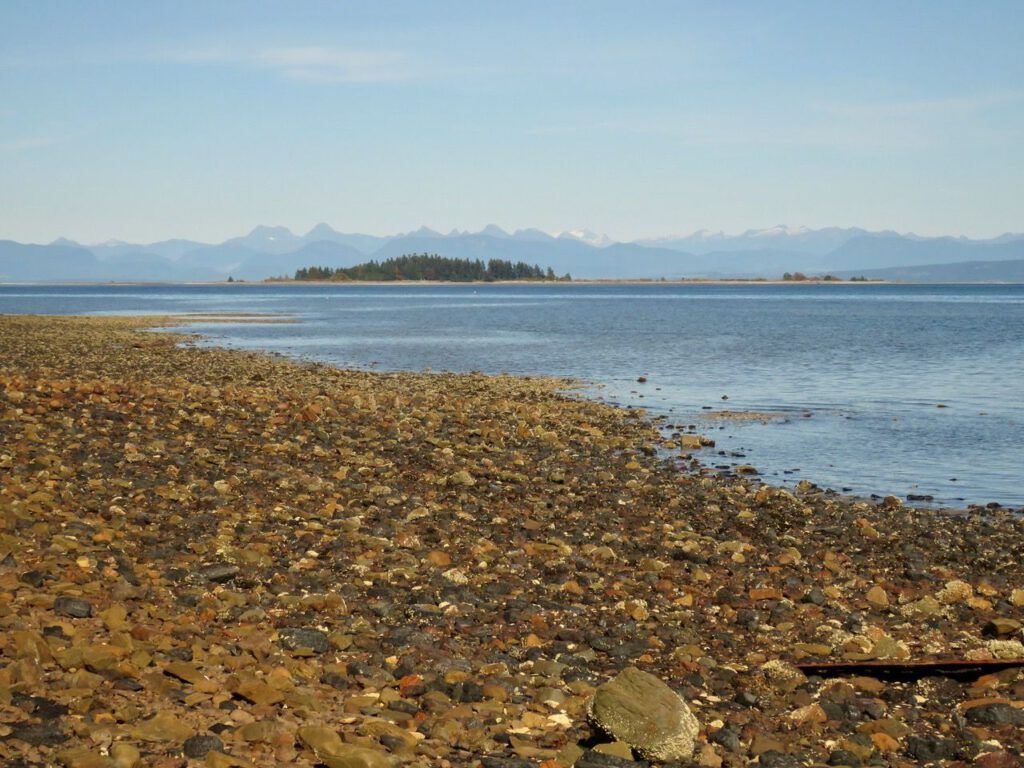 It was the time of year when the sea lions start to gather.  They make a tremendous racket! 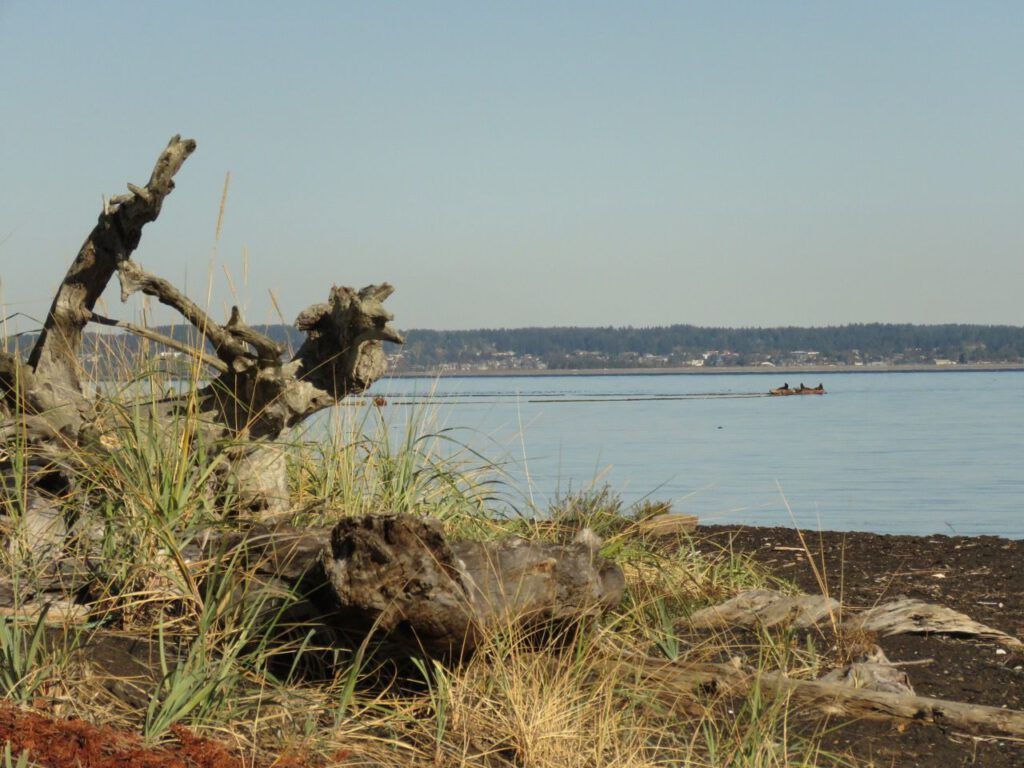 Chris is one of those awful Morning People and she always drags us out of bed at crack of dawn for our first walk of the day. 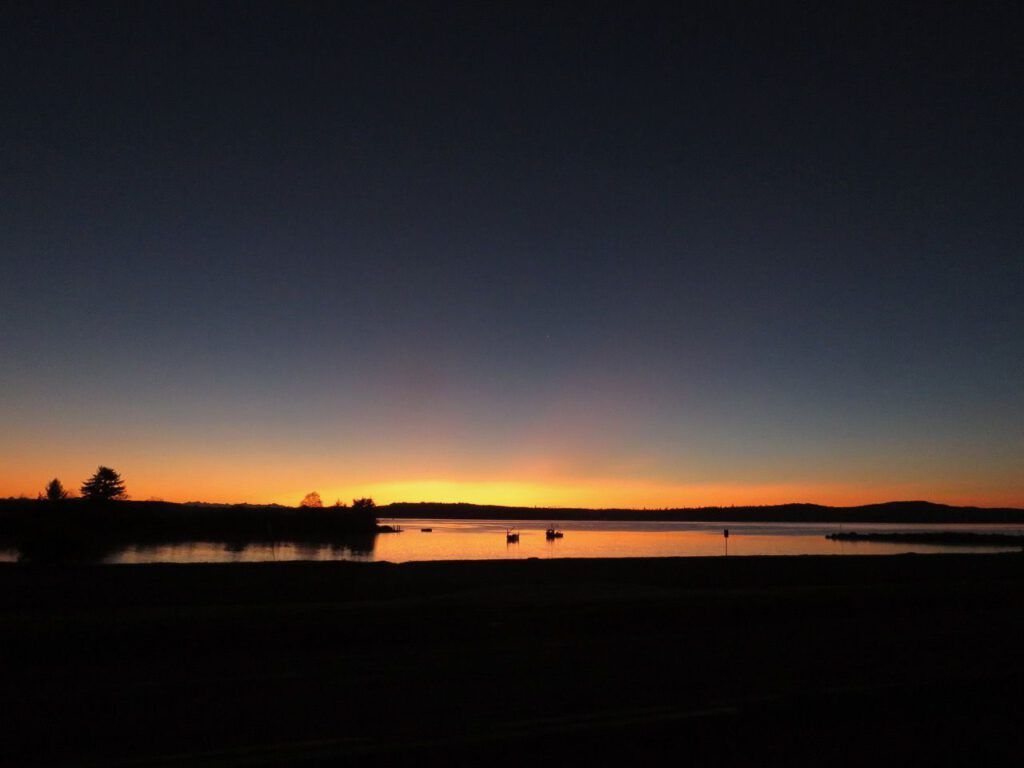 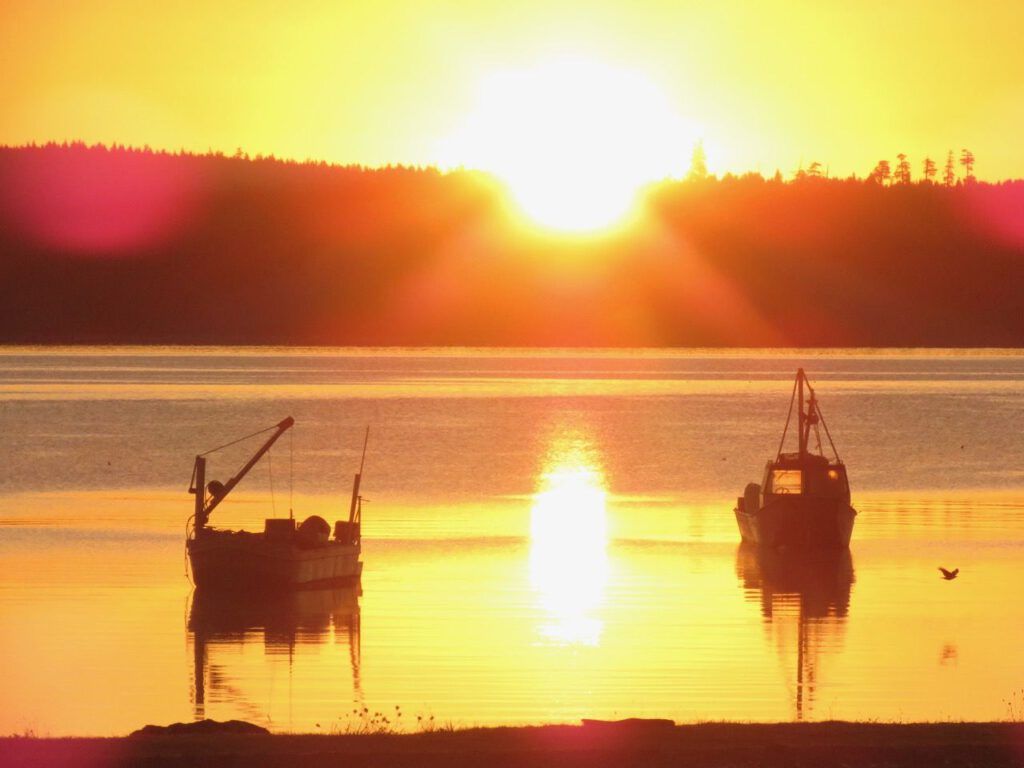 We spoke in Nanaimo that night and caught a late ferry immediately afterwards for the short ride to Gabriola Island.  There we stayed with old friends, Dave and Rosemary Neads who used to live at the Precipice just down the road from our place on the Chilcotin.  They are enjoying a happy, active retirement on the island. 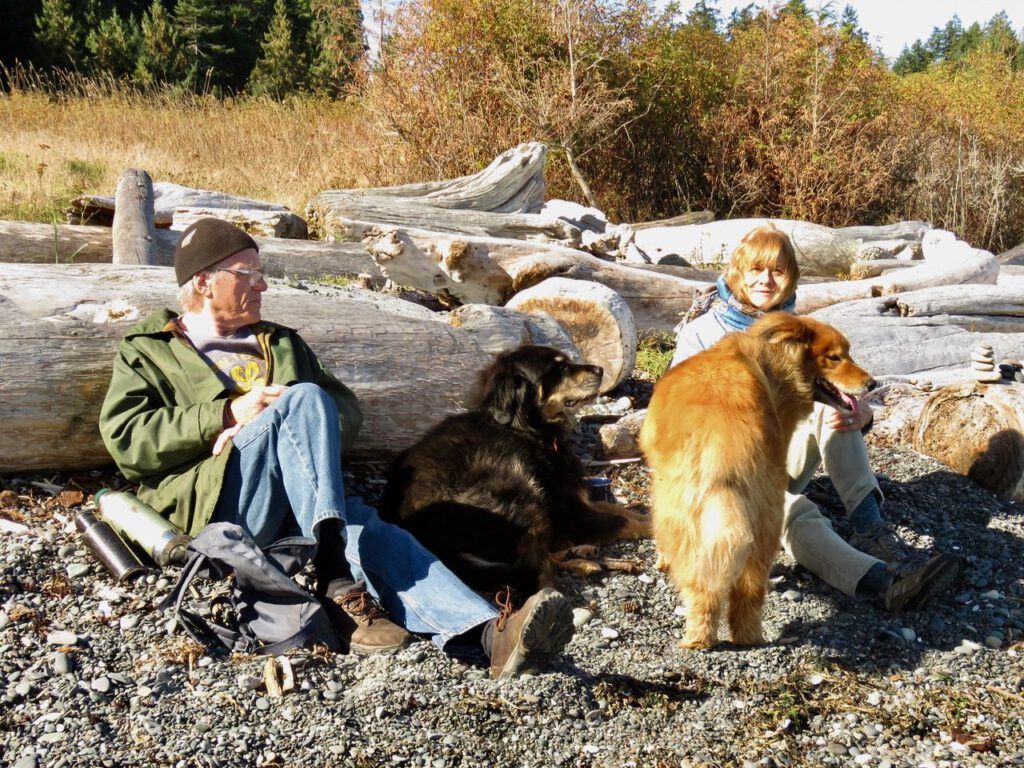 Gabriola is pretty enough and Badger and I would love it if we did not have to be tied up so much, but Chris declared it too crowded and too wet for her taste.  It was certainly not wet during our stay (Thanksgiving Weekend!!). 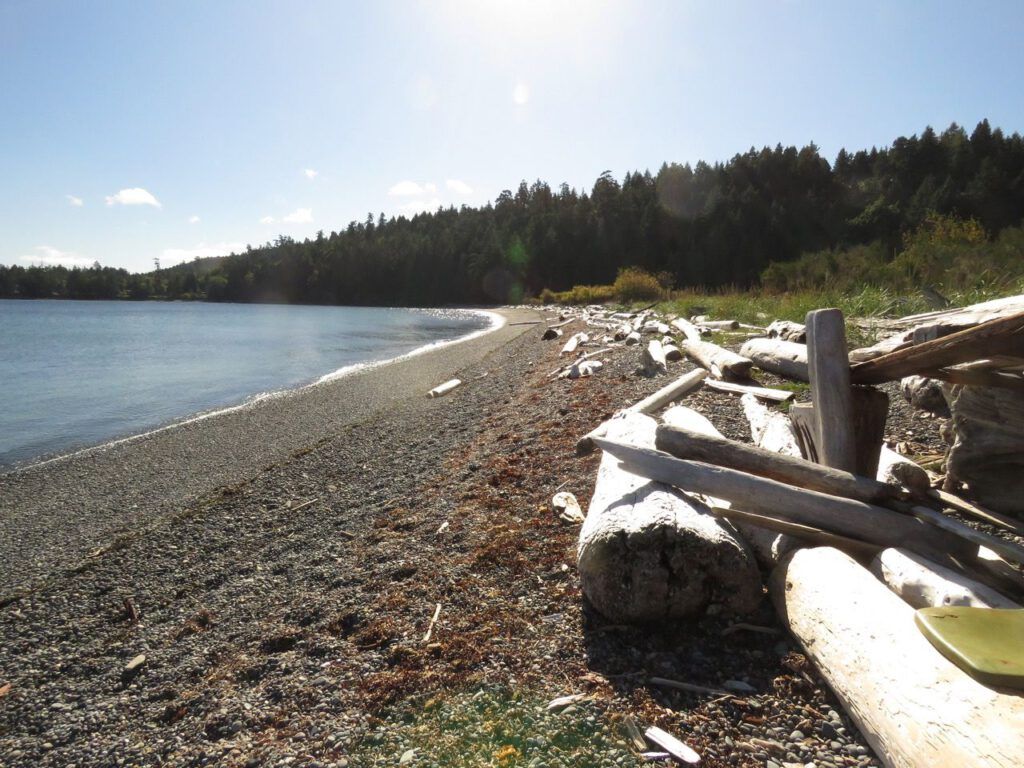 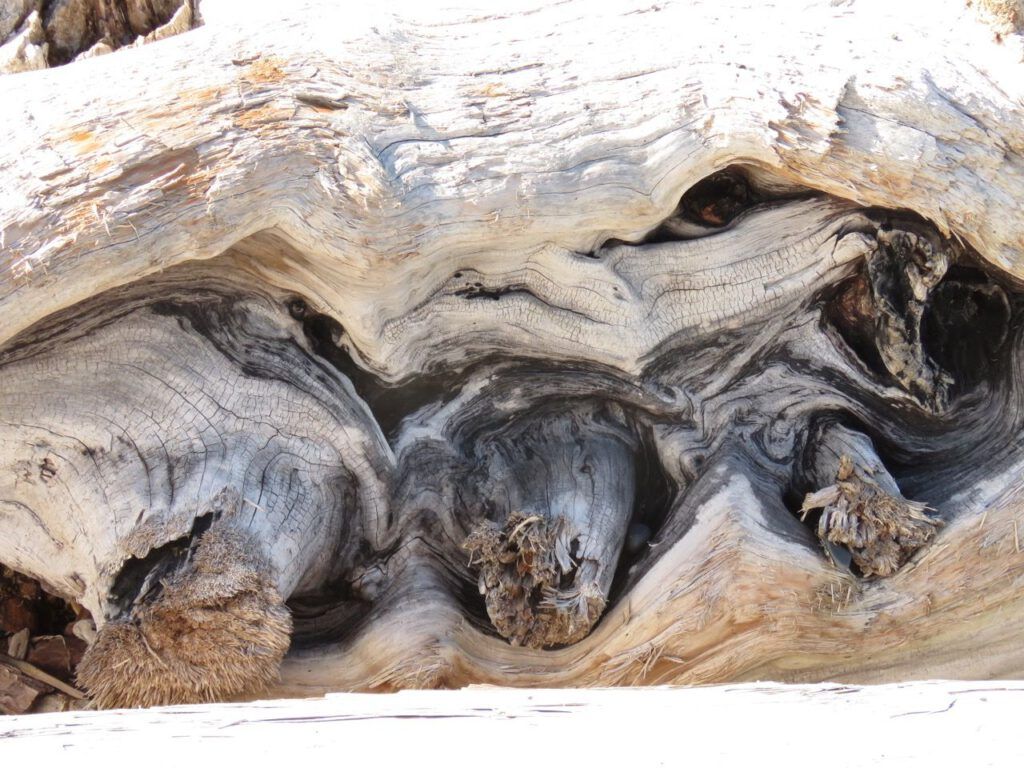 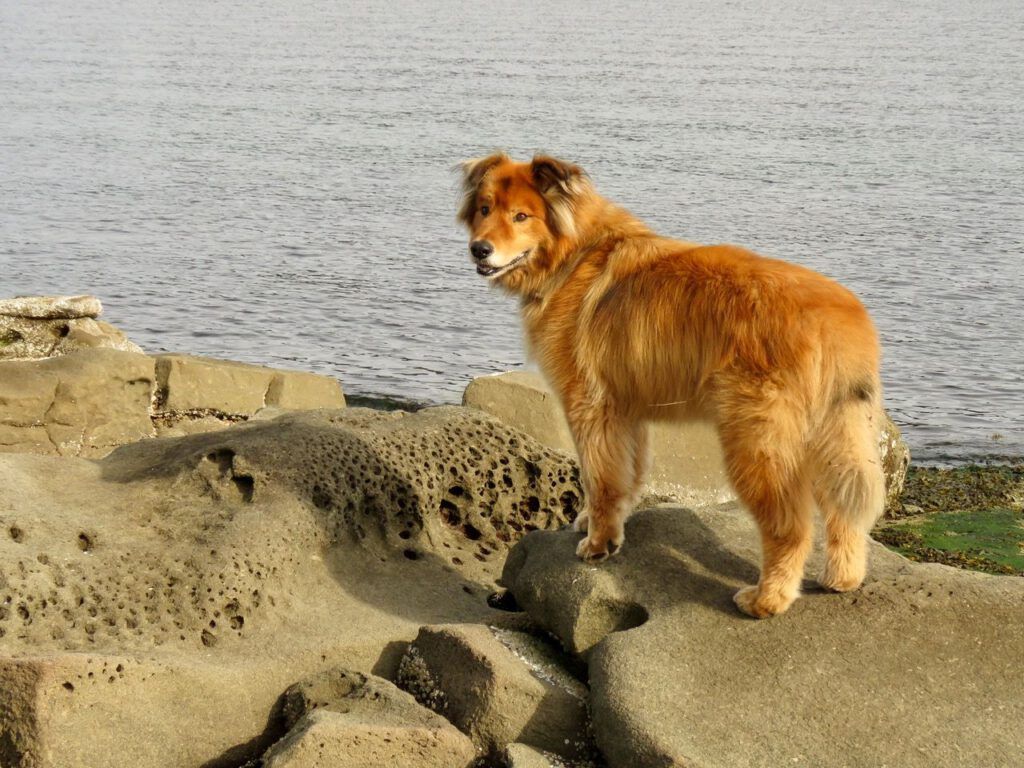 One more slide show on the Island – at Duncan Library – and then we took our last boat ride back to the Lower Mainland.  It was at this point that the weather changed for the worst, and we arrived at Horseshoe Bay in heavy rain. 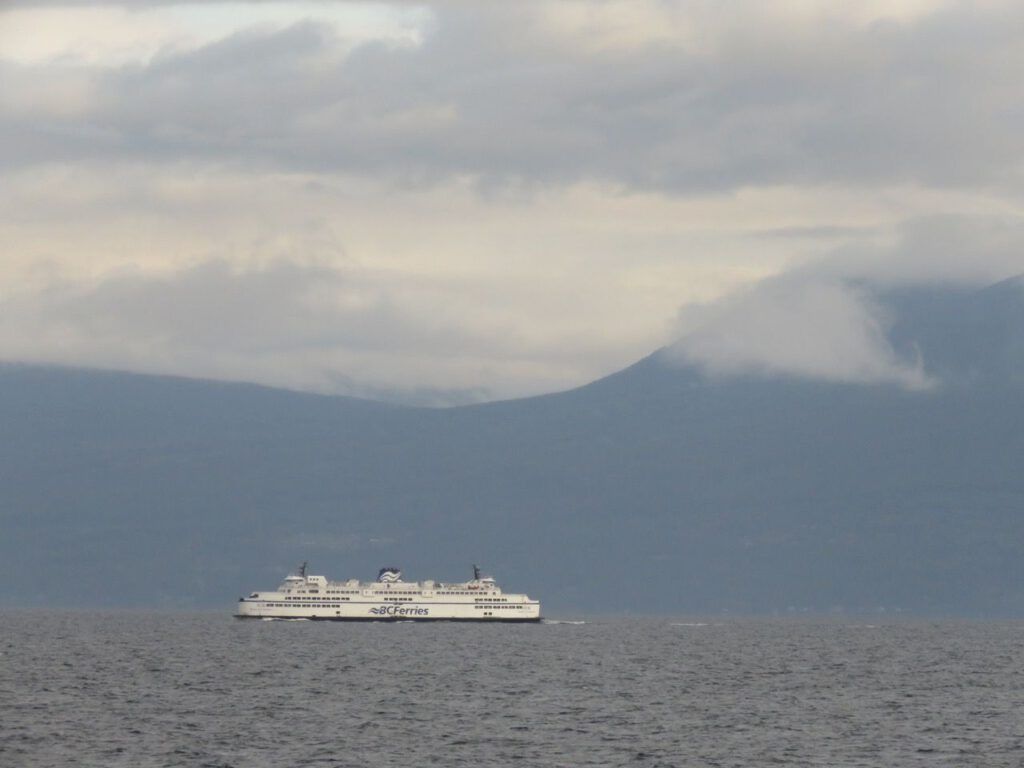 I’ve got so much more to tell you I have to end this post and start another.

3 thoughts on “Wilderness Dog Tells All – Part One”