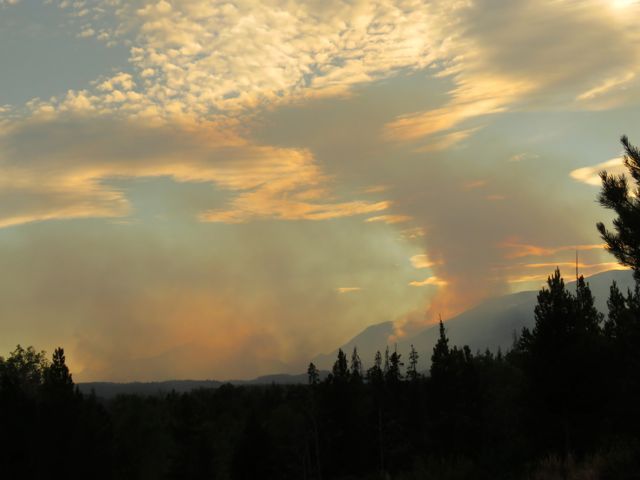 Life goes on – and so does the fire.  The plume on the right is a very hot fire climbing the slope of Mt Nogwon.  This picture was taken on the evening after I posted last time.  Here is Google Earth’s interpretation of it and other hot spots. 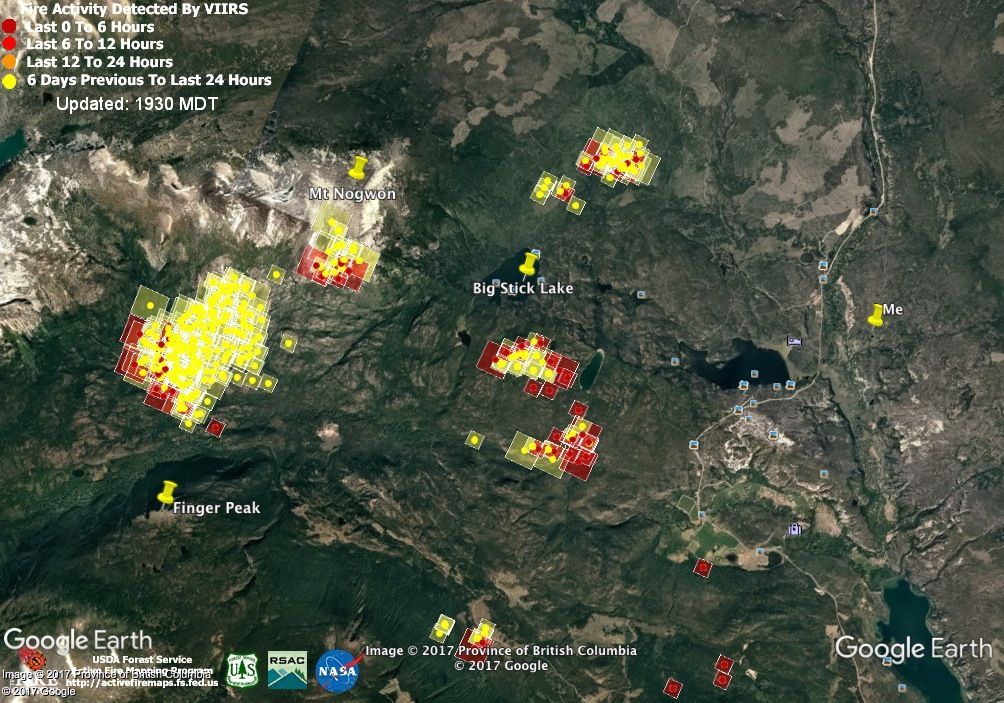 As the sun went down, we had a fantastic sunset. 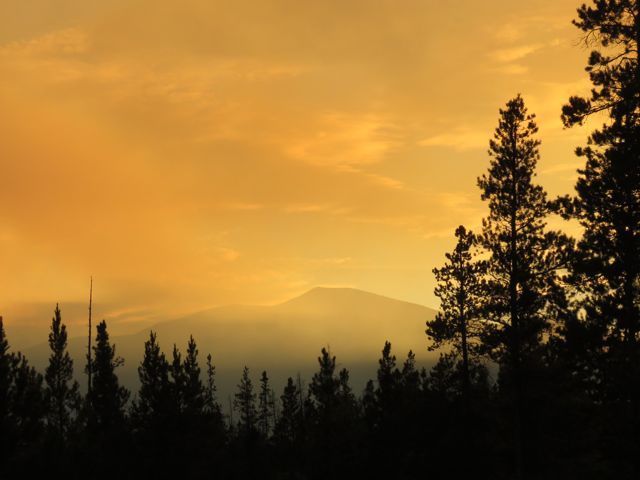 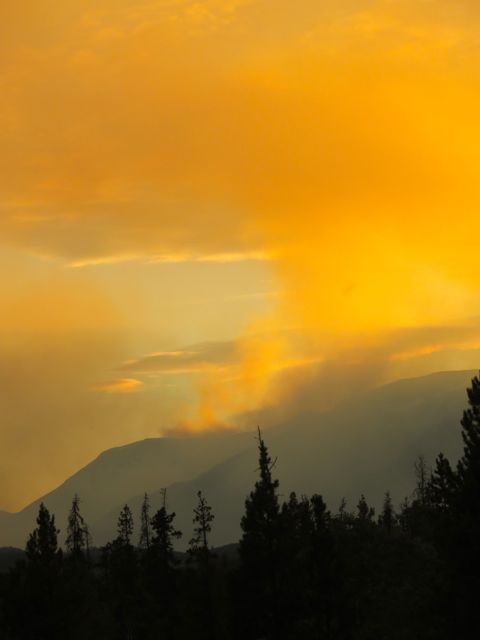 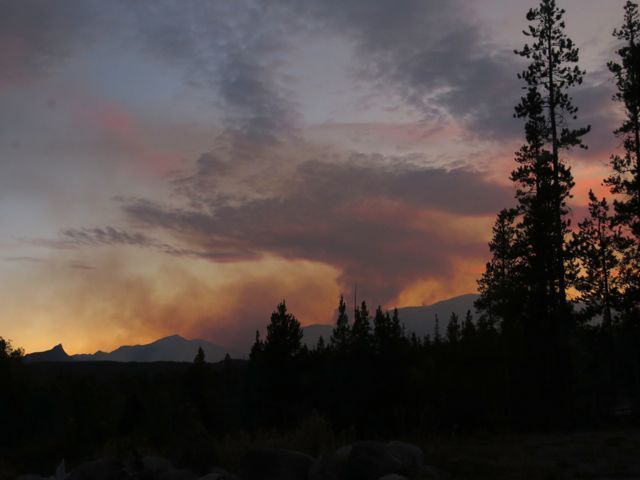 Although the Evacuation Order has been upgraded to Evacuation Alert in our area, the fire still dominates every moment.  I watch the flagging tape for the slightest breath of wind; I scan the fire from horizon to horizon, and even when inside, I constantly monitor the aircraft who fly back and forth during the daylight hours, sometimes very distant, but always there.

However, I slowly started to get my life back. The first return to normalcy was our second mail delivery in 7 weeks.  I was informed that could have picked it up in Williams Lake, but of course if I’d left home I would not have been able to return.   Needless to say, there was quite a pile waiting for me.  Holding it is Lindsey, daughter of Melody who runs the post office.  Lindsey is 10 and she is supposed to go back to school after Labour weekend, but if Tatla Lake and Kleena Kleene are still on Alert, school opening will be delayed. 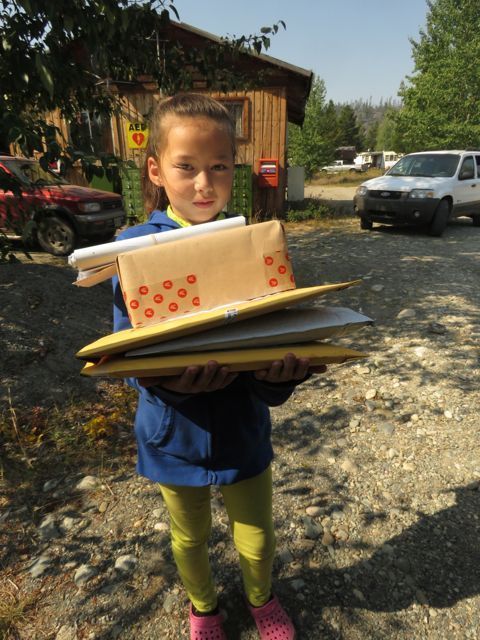 The second thing was to unpack – tentatively at first, but I got so sick of things lying around everywhere I put everything away.  The tarps are still around the bottom of the building and lists of things to do or take still perch on the work surfaces, but I don’t think my place is in danger now.

As our neighbourhood began to move around and meet, I heard various complaints about the management of the fire.  These are inevitable.  Some are totally legitimate, such as dealing with the growing fire in the Klinaklini Valley before it exploded over the top.  I mentioned it in an earlier post.  Other people complained to Forestry about this but absolutely nothing was done and now it’s costing millions to deal with it.  It’s not as if there were no fighters available, there were hundreds.  They were simply deployed elsewhere.  The fire bosses simply ignored it.

Others who worked on the fire told me that people in unfamiliar coveralls (each district of helpers had their own colour) turned out to be cruisers from a logging company in Williams Lake.  They obviously got permission to go in there and see what could be salvaged from the fireguards.  They hauled useful logs out but left the trash as a fire hazard. 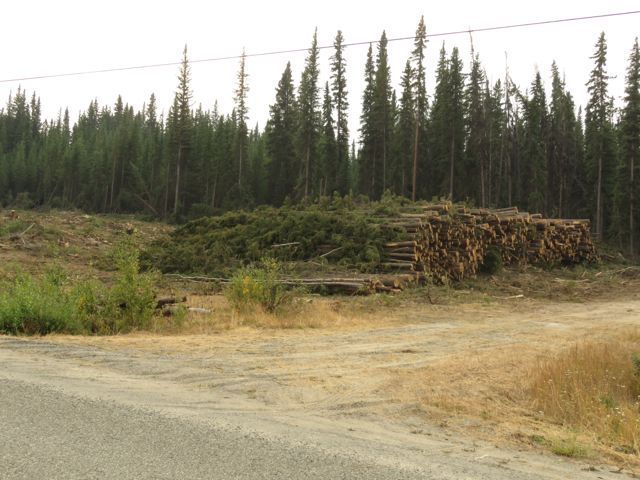 There is no doubt that an organization as cumbersome as the fire fighting machine, using both federal and provincial branches of government, where 99% of personnel are brought in from outside, often from a city, and rotated every two weeks, is bound to be extremely inefficient.  And no matter how well everyone works, efforts are often negated in a flash when wind and weather takes over.  A helicopter with a bucket might work for 8 hours a day, but it’s contribution is puny if the elements flex their muscles.

Some people even said things like it was a conspiracy by various parts of the fire fighting machine to delay the fire’s resolution in order to make more work for themselves.  I find that one a bit hard to swallow.  I like to think of all these firefighters, both on the ground and in the air as knights in shining armour helping to save our homes and lives.  St Georges riding off in their mechanical steeds to fight the fire dragon. 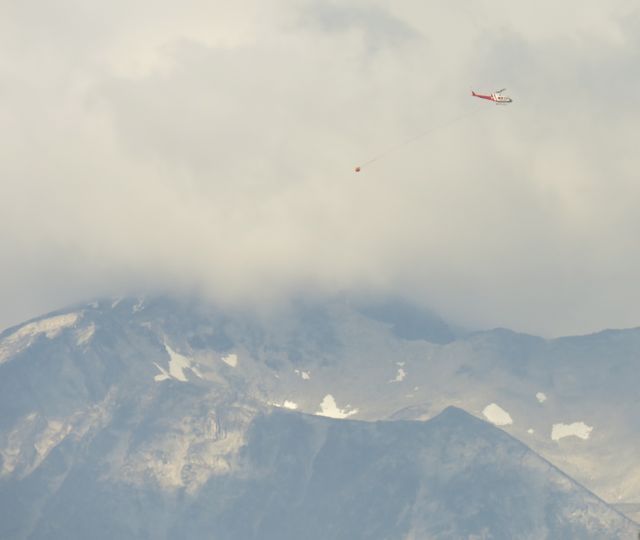 It is often very smoky, especially over the fire area.  On two consecutive days I heard water bombers.  For hours, it seemed, the flew round in circles doing nothing. 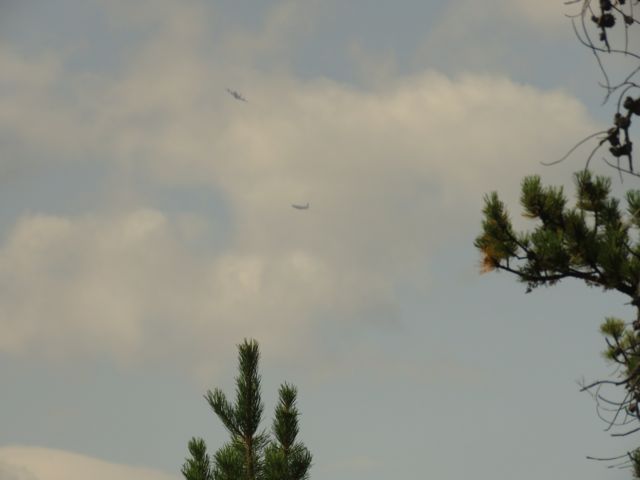 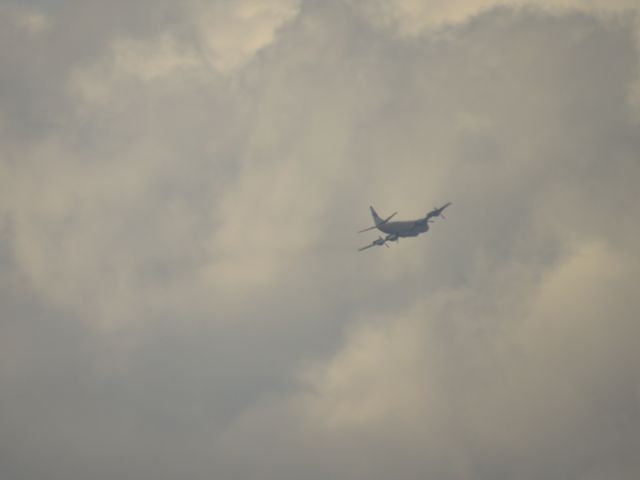 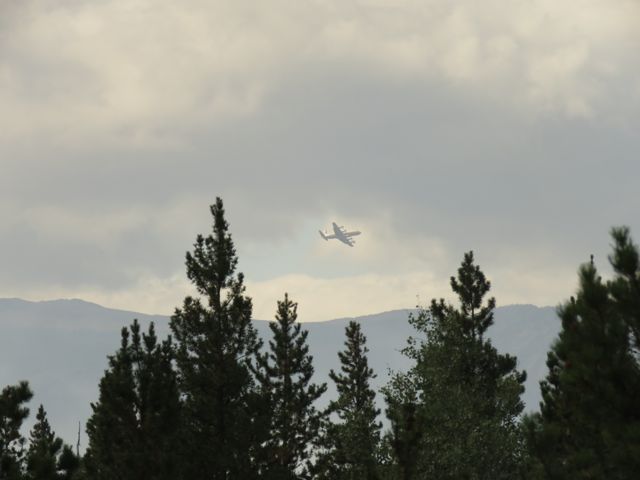 A lot of these water bombers are ancient.  This one is an Elektra, a pre-jet passenger plane converted into a tanker. 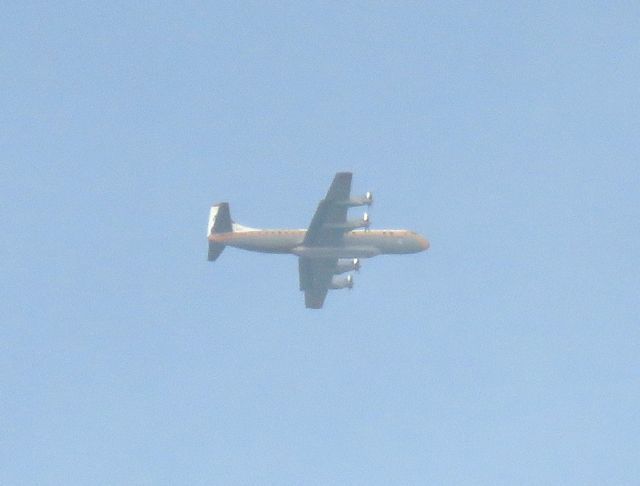 Here is a website giving the history of air tankers (scroll down a bit for the early years.)  At first, bags loaded with water were taken up in a Beaver then thrown out – bag and all – not always very safe for anyone underneath!

On clearer days I would go up onto the bluffs to peer through the smoke and try and see what was going on.  Perkins Peak with the McClinchy River below. 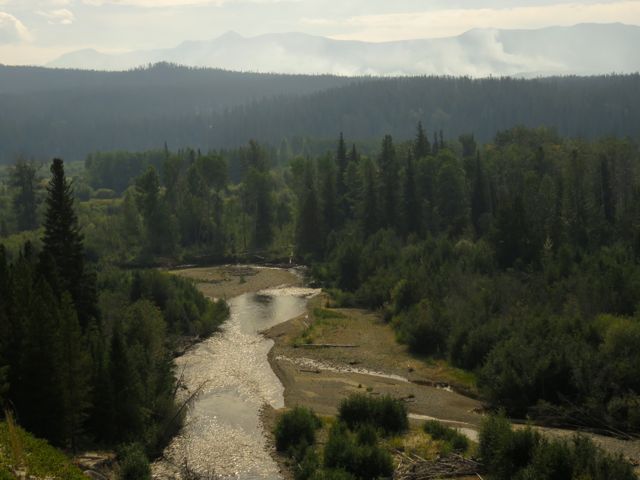 A helicopter commuting past Perkins Peak – I can’t believe how much snow there still remains on these mountains.  One would think that all the heat would dissolve it.  Also the soot layered on the snow would cause it to melt faster.  Forest fire seasons can be measured in glaciers. 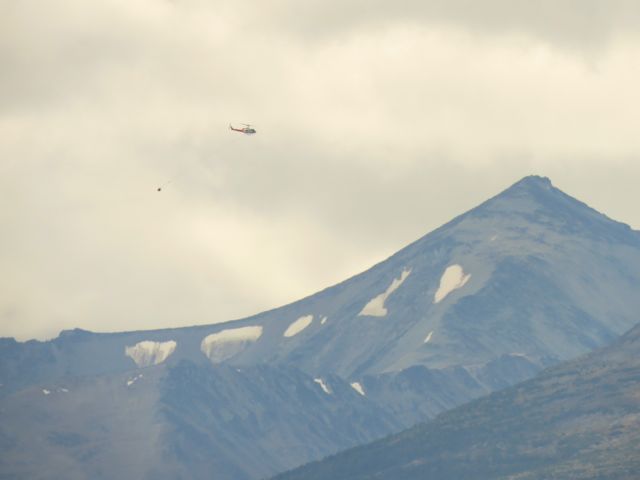 One evening we had a tiny dribble of rain.  It barely wet the ground (nothing was recorded in the rain gauge) but it cleared the smoke a little and for the first time in weeks I could see the difference between brown and green.  Note how black the slope is below the rocks.  The fire must have roared up it like in a chimney. 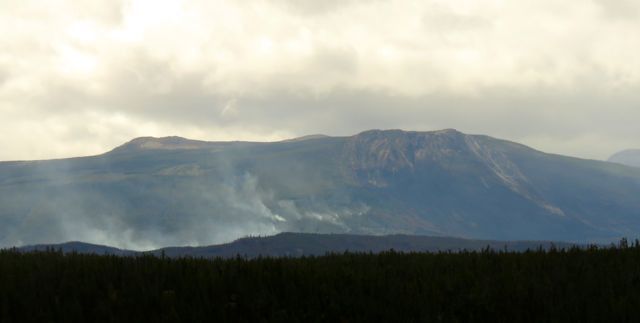 The lake across the road still has a great deal of fire activity behind it. 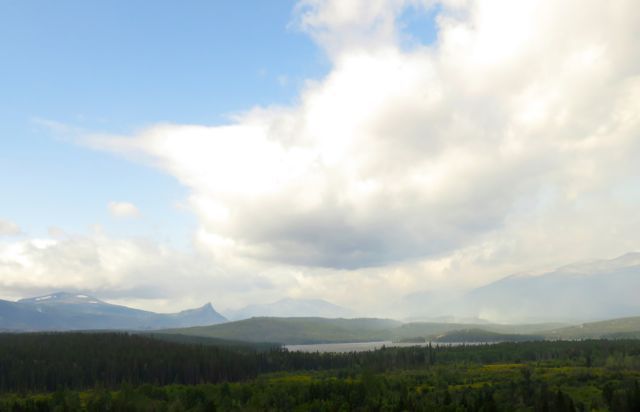 One afternoon I visited a neighbour who also stayed during the Evacuation Order.  He ended up being bracketed by the north and south parts of the fire.  His bladder and sprinklers are still in place.  He used to have a lot of trees around his house (which he built himself) but the day after the fire erupted, he cut them all down.  The logs are stacked behind his woodshed.  I thought about clearing some of mine, but couldn’t stand the idea of living in a clearcut afterwards. 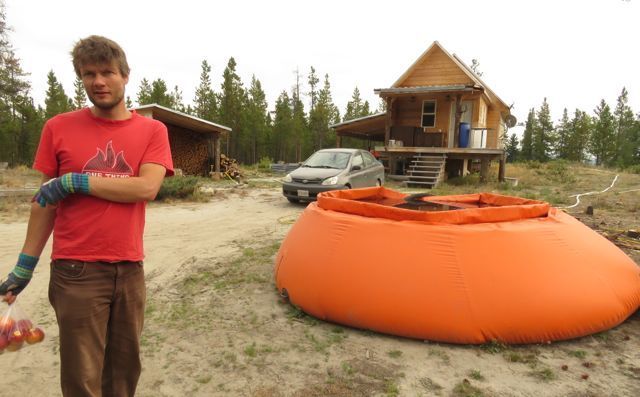 As I left my neighbour’s place, a second tiny shower pattered onto the ground.  It caused a great deal of excitement and emails were exchanged from Bella Coola west to Tatla Lake.  (“Did you get any rain?” “How long?” “How much?”) But when it cleared, you could see that it hadn’t done much good. 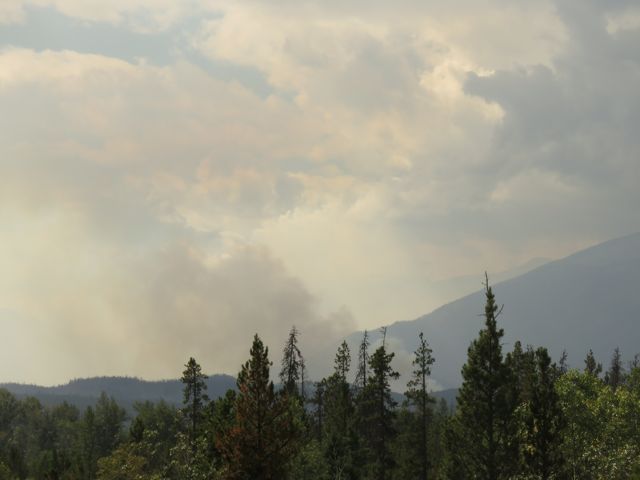 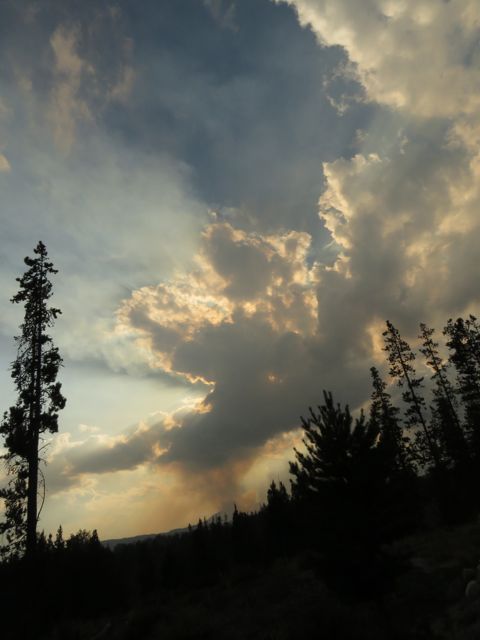 I send weather reports every morning to the fire office.  It is one of the few times I bother with a clock.  How late the sunrise is now!  I eat my breakfast in the dark.  I barely noticed the summer’s passing – it quite literally went up in smoke.  Unable to go to the library, I fell back on the huge store of books in my attic.  At times like these I tend to have a binge on a single author, and I went through all my Peter Robinsons.  He writes detective fiction.  Some of his titles were not the most appropriate: In a Dry Season, Playing with Fire, and The Summer That Never Was.

Our two local fires have now joined and make a total of 14,000 hectares.  Small beer compared with the rest of BC’s fires.  (The Precipice fire is far left, the two KK fires are southeast of it.)  Some are still out of control – the Elephant Hill fire on the bottom right has always been a wild one and it jumped the defences and surged ahead not long ago.  Highway 24, that runs above it, was once the escape route for people fleeing from the other fires – now it is all on Evacuation Order.  R.E. Donald, another detective fiction author I like, lives right across the road from this fire.  Her husband loves and gentle-breaks horses – the animals were moved south a long time ago but the ranch owners came back to harvest the hay. 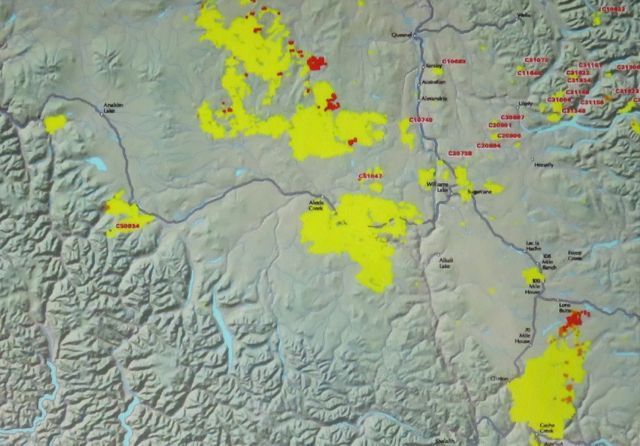 No one has lost structures in our area, but 52 homes and 145 buildings have so far been consumed elsewhere.  The cost is $400 million and still rising.  The hectarage burned 60 years ago was greater, but that was before firefighting became so intense.  This will be the most expensive fire season to date.  A lot of livestock has been unaccounted for, but no human life has been lost.

And life goes on in the bush.  Birds are congregating and migrating south.  An adult eagle is feeding on something it has brought to it’s nest. 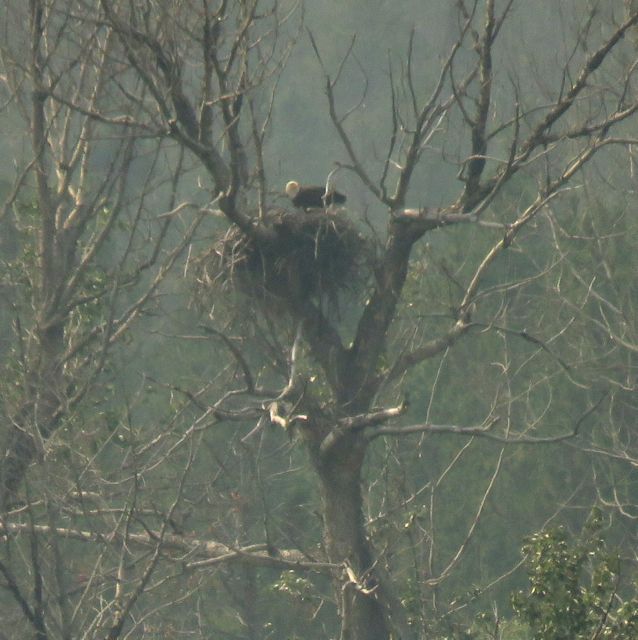 Long-horned sawyer beetles appear at this time of year.  This one is climbing my window (outside!) It is 7 cm across! They lay eggs in wood. 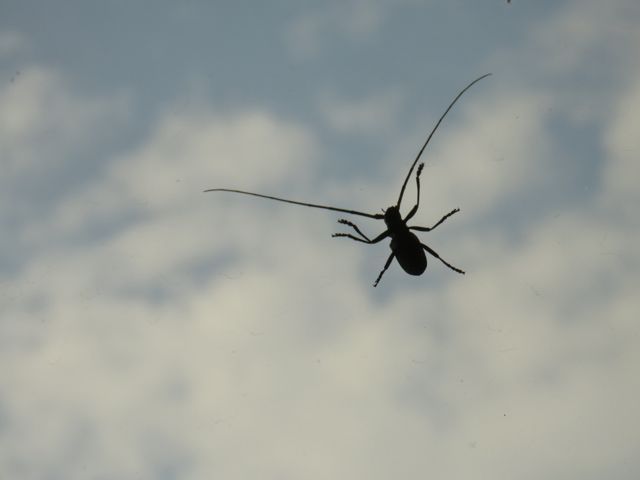 The kinnikinnick has a lot of berries this year. 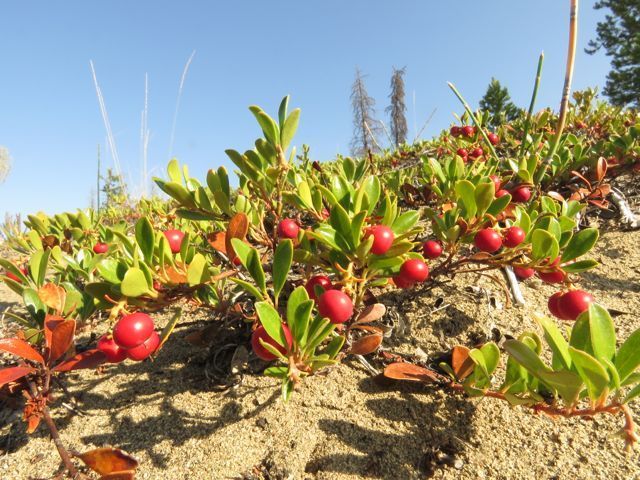 Friends at the Precipice, who still post daily on Facebook, included this picture of baby barn swallows – a happy picture on which to end this post. 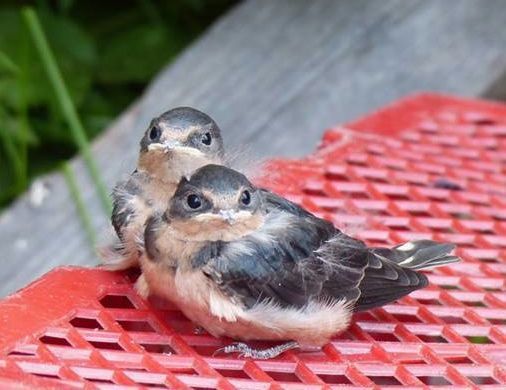 4 thoughts on “Life Goes On”