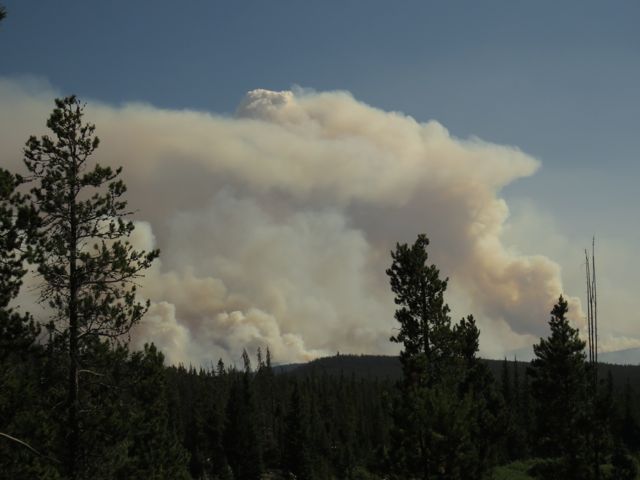 While I was writing the post about Harry’s Book, the Fire Dragon was emerging from his den with a vengeance.  I knew the wind was getting up – first it seemed a blessing for the smoke was swept away.  But I knew from other fires, notably the Lonesome Lake fire of 2004 (please ignore the links, they no longer work) that a wind after a couple of days of dense smouldering can make a fire explode.  And this is exactly what happened.  Normally I see the mountains while working on the computer, but when it’s hot, I have to shade the window, and it wasn’t until I stepped outside after publishing the post that I saw the true extent of what was happening.

The original fire missed patches of forest and these  were now burning merrily.  Some of the new activity was due to back-burning as well.  But the strong west wind was blowing the Kleena Kleene fire away from me. I was alarmed, however, to see a very active fire to the north where I had so far never seen smoke.  It wasn’t until the next day that I was able to find out it was in fact an older fire that had been left to burn as it was in an uninhabited area, and was about 20 km away.  Now 20 km is nothing for a fire dragon to gobble up – the Lonesome Lake fire travelled 22 km in two days – but a very strong southwest wind was behind it all the way.  Winds from the north are never strong here, still, until I found out where it was, it was alarming. 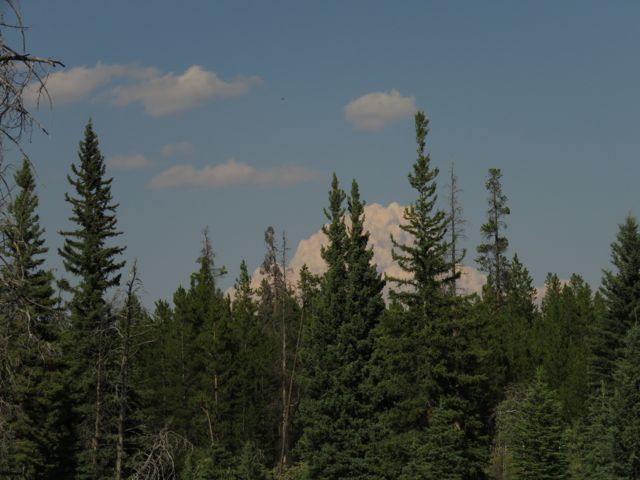 Worst of all, though, was the smoke from the Precipice fire that started to cover the sky.  People are still in there (although they’ve been told to leave many times) keeping their market garden and animals alive.  Their fire is only 1 km away from them, and it fact has pretty much surrounded their valley.  I am afraid I would have been out of there long ago.  I follow their gripping  entries on their facebook page, but you have to be “friends” to access it so I will not link it here. 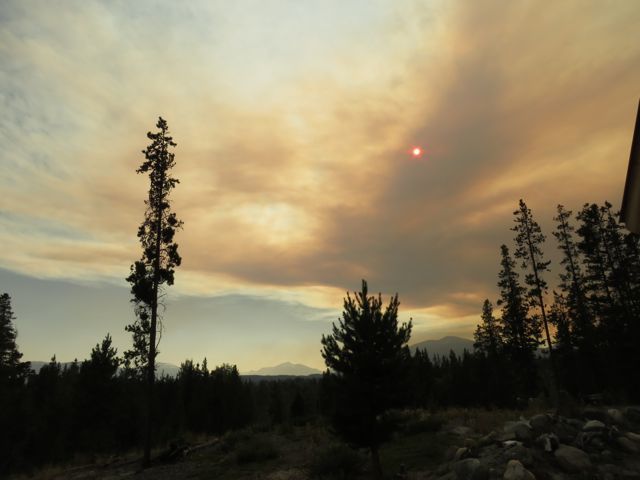 Although I had not properly unpacked from my last evacuation, items had been taken out of boxes and used so I started getting everything in piles again.  I backed the van to the loading dock. 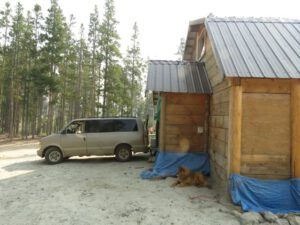 The tote full of baking goods is too heavy to lift and this way I could slide it in without unpacking it.  I need these items as I have food sensitivities and cannot use regular flours.  The only way I can replace them is by mail and there was no guarantee that we would get another mail delivery soon – or that I would be around to receive it.  So I had to bring the lot.  Fortunately half of my life has been spent shopping for months at a time so I still had a good supply.  I can’t just load them into the van and leave them there as they would get too hot during the day and be ruined.

I knew I was safe so far, and as the sun was swallowed by the Precipice smoke, the wind died abruptly and the fire dragon began to subside. 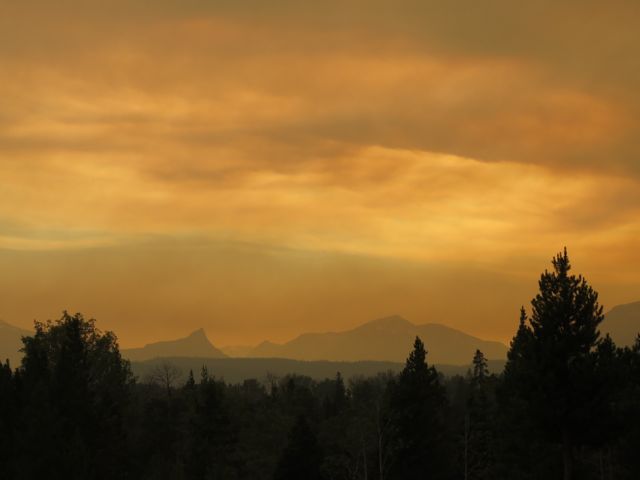 But before dark, a new plume of smoke started in front of Finger Peak. 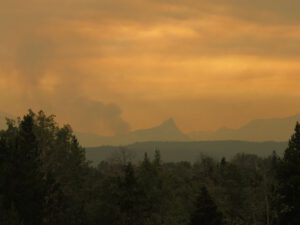 I went to bed and I had just dozed off when the phone rang.  It was a somewhat garbled automated message from the Search and Rescue saying our status of evacuation alert had been re instated as evacuation order.  The area had been extended further east to people who live not far from Tatla Lake.  We were supposed to get out immediately.  Nimpo Lake and Anahim Lake (between me and Bella Coola) were now on Alert due to the Precipice Fire.

I was sick of driving up and down the Bella Coola Hill and finding that the alarm was only temporary and would not affect me.  I decided to stay put, but it was not a restful night.  Several times I looked into the dark and saw flames and red glows all along the south horizon.  Worst was a very active burn in front of Finger Peak to the southwest.  The fire dragon must have happily invaded new territory.  Dawn came late due to the smoke and all the red areas had died down.  Although the temperatures have reached 32C here (nowhere near as hot as other areas) the mornings go down to 2C to 5C, so feel deliciously cool for  two or three hours.  If it hadn’t been for the smoke, it might have frozen.

Yesterday morning there was so much smoke the sun was barely visible. It was no longer orange, it was pink. 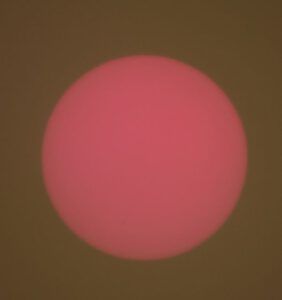 A heard (but could not see) a helicopter cruising round during the morning obviously looking, but there was no other aerial activity.  Ground crews might have been working – they had been told to get out in such a hurry when the fire exploded that all the equipment had been left there.  The wife and mother of two of the firefighters told me they had set off to work not knowing if their machines were still unburned.

Burn out operations will continue as weather conditions allow. Efforts have been focussed on deepening containment by creating a burnt out edge to the containment guard, in order to prevent fire escapes. No property is currently under immediate threat. Smoke is expected to be visible as pockets of fire burnt out in interior of the burn area.

This had been posted several days before.

Best is to try and piece together stuff from other websites.  Modis shows the extent of the fires and the hotspots.  This was taken today. The Precipice fire has increased by 1000 hectares.  The hotspot on the Kleena Kleene fire is at Finger Peak. 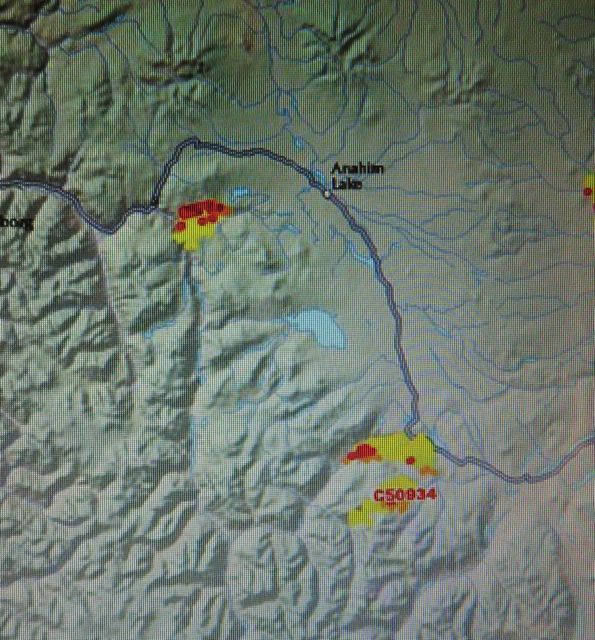 If you have Google Earth, you can access wildfire information by going to VIIRS.  They show only the last six days’ activity, which is why there are gaps.  Yellow is old and red is new – nothing to do with temperature. I have marked Me, Finger Peak, and Perkins Peak. 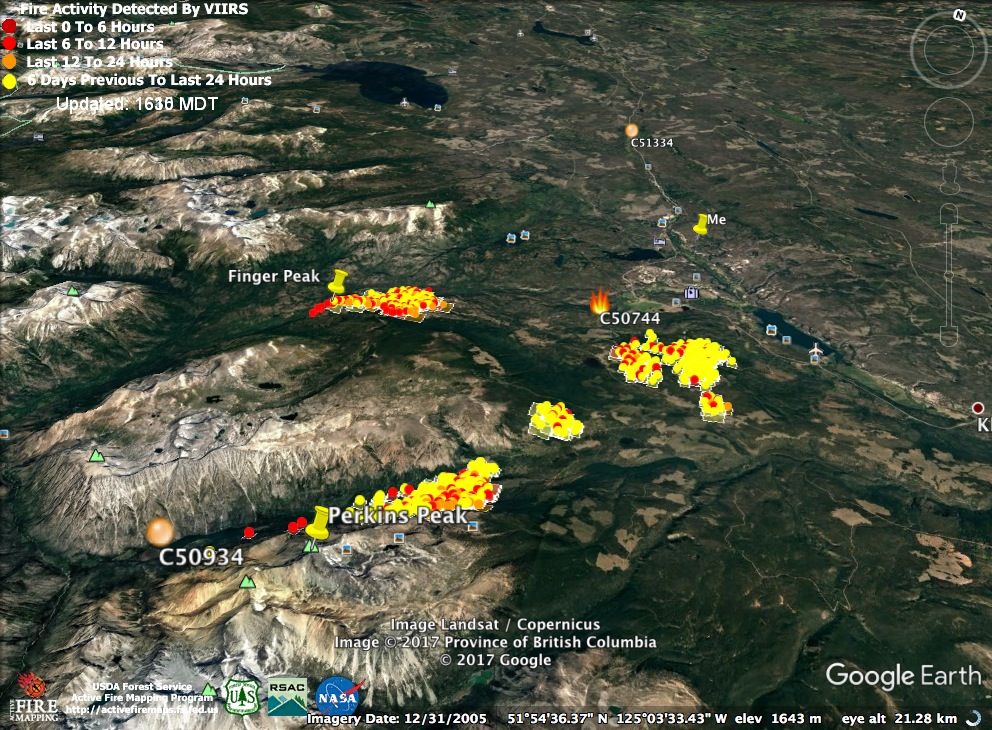 If you zoom in, you get pretty squares.

Finger Peak from the south: 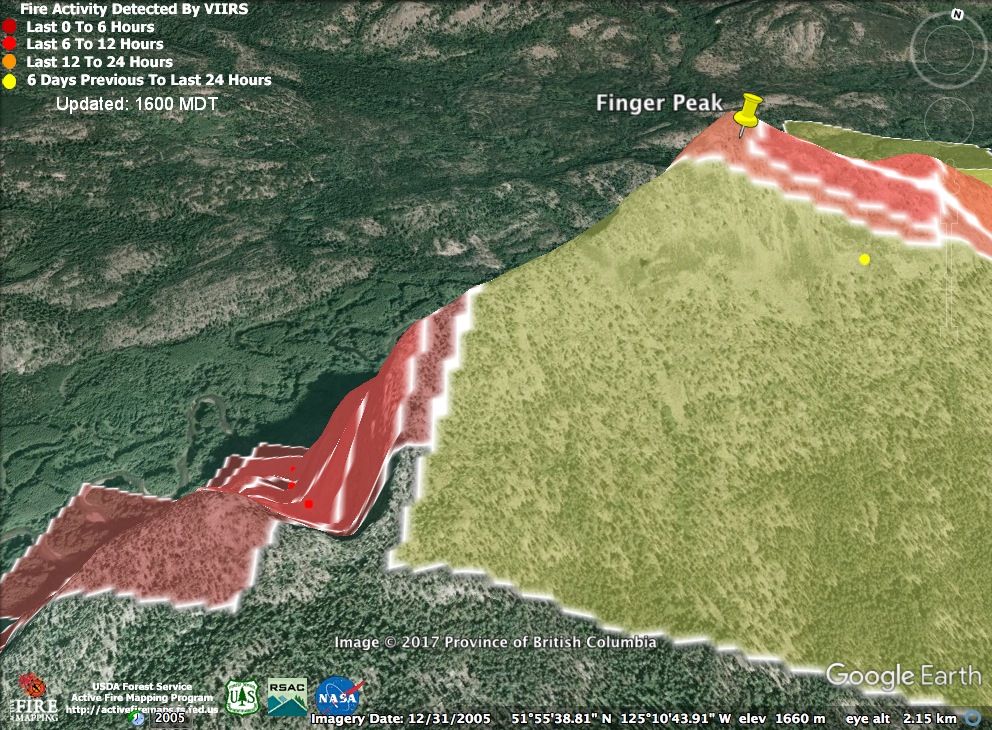 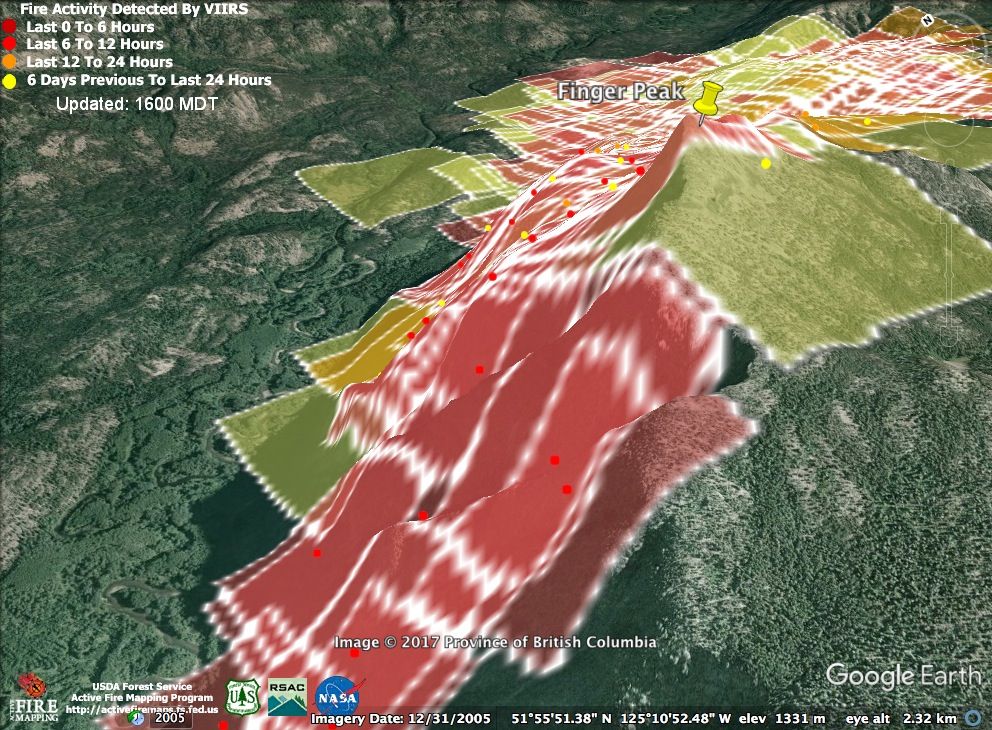 Yesterday afternoon I got a call from the man who owns the motel at Tatla, which is the base for the search and rescue command centre.  He said he was reinforcing the info that I was supposed to leave.  I was not to got to Bella Coola, however, but to Williams Lake.  I was to report at the Boitanio Mall.  Forget that!  If I went out there I would never get home.  The motel owner said the police would be enforcing the order.

A short time later a cop called.  He read a standard evacuation order then asked my address.  When I said “Highway 20”, he did not know where that was – even though he had just driven on it from Williams Lake.  Like all the cops I have encountered in our situation, they have come from outside the area, most of them here for only a few days.  This one had just arrived from Alberta.  This is one of the things that’s so frustrating.  These officials, who know nothing at all of the area (and I hear this at all levels of fire-fighting), make decisions without having the slightest idea of the geography of the country or the links we all have with each other despite the distances in between.  It never occurs to any of them to consult anyone local.

Anyway, I said I was staying.  Then he asked who was my next of kin in case I died.  I told him it was my brother and family in England.  I do not know his phone number (we correspond by email but the policeman’s form did not have a box for that.)  Next question was who my dentist was so they could identify my remains from my teeth.  I remember these questions happening at the 2004 fire as well.  It is obviously standard procedure intended to scare people.  I told him I’d last gone to a travelling dentist who had come to the Anahim Lake clinic 18 months ago and hadn’t been back.  I could tell that the poor man was not pleased with my answers but he didn’t know what else to do.  He then read the rest of the info he was supposed to give me.

This morning the smoke was a little less dense.  A small breeze started up from the west and I hung a piece of flagging tape outside the unshaded window so I could observe the strength.  I did a laundry – hope the clothes won’t be too smoky!

And harvested the first carrots from my garden! 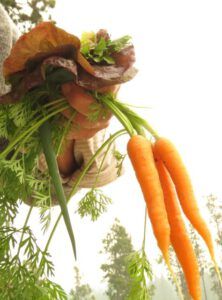 In the early afternoon I heard planes with deep engines swooping over the fire.  I couldn’t see anything, 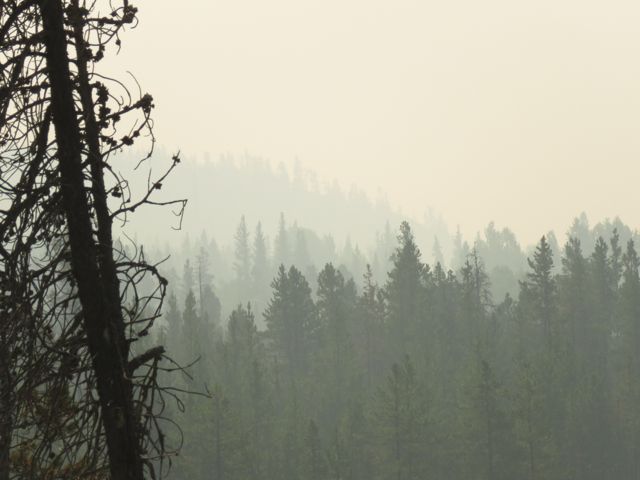 but knew they must be water bombers dropping retardant.  This is a welcome sign.

So it’s a waiting game.  I can be out of here in half an hour if I have to.  On August the 12th, the weather is supposed to cool and get more humid.  Whether it rains or not remains to be seen (and how accurate that forecast is is anyone’s guess.)  In the mean time, each day is another one survived.  I really know the meaning of one day at a time.  As I post this at 7.30:pm, the wind has died completely again, and, barring anomalies and a faulty forecast, we have only 6 more days to get through.  Unfortunately, cooler weather is often preceded by wild winds.

27 thoughts on “The Fire Dragon”