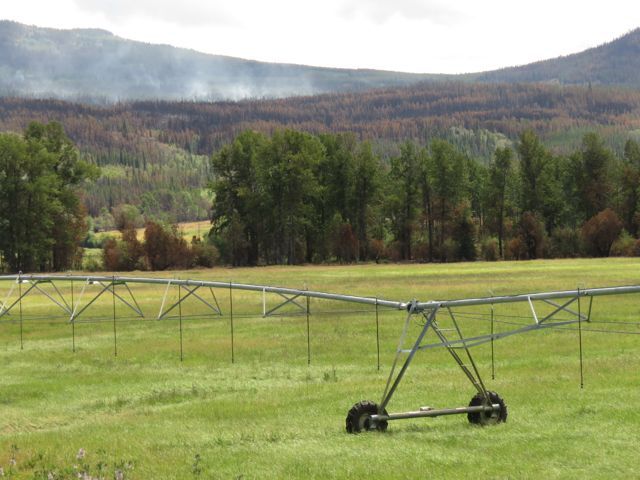 So now we have Part Three of the Kleena Kleene Fire story.

The rain that fell on Thursday 22nd July was a good soaker.  Showers had been forecast so no one could believe our good fortune when it poured all day.  So on Saturday I left the gloomy, dribbly, buggy Bella Coola Valley and once more drove up the Bella Coola Hill to the Chilcotin.  It was foggy at the bottom – this vapour is more cloud than smoke. 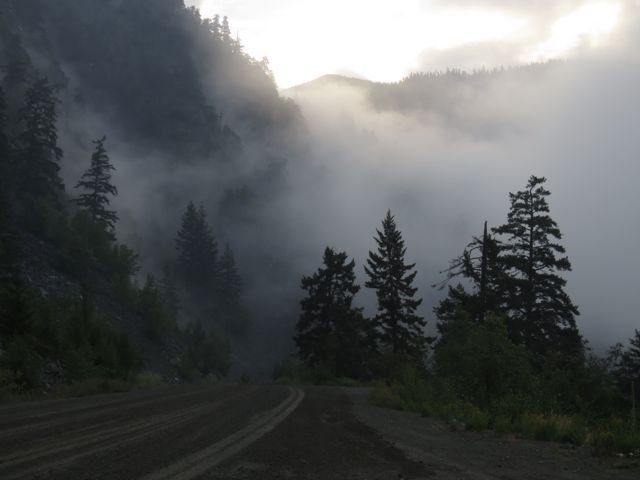 I drove out of the fog at the top but the Chilcotin was delightfully cool and damp.  One can just make out smoke in the distance, seen through a screen of trees burned several years ago at the top of the Bella Coola Hill. 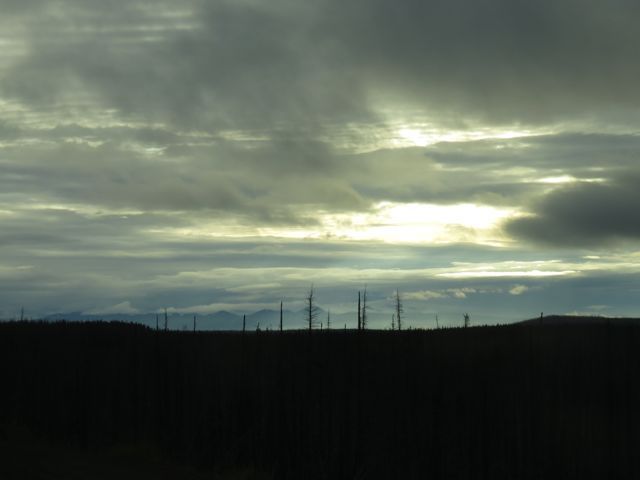 There were the inevitable cows and feral horses on the road. 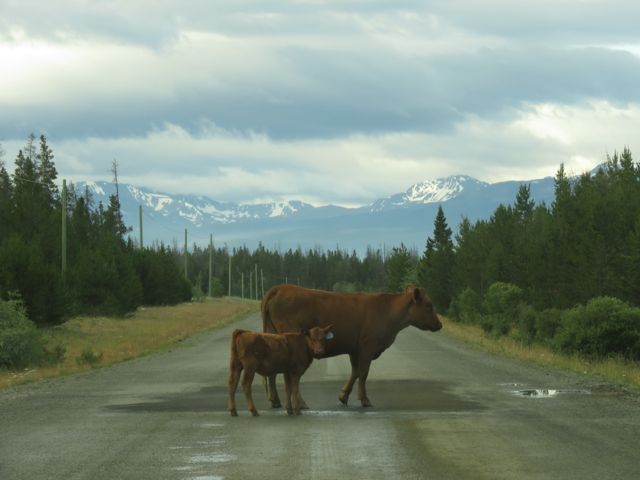 Several of you have expressed concern for the animals both wild and tame.  The west Chilcotin is open range – Highway 20 is not fenced, so livestock is part of the scenery every summer.  But east of Tatla there are fences and normally farm animals would be behind them.  However, gates were opened and fences were cut to give livestock a chance to escape, and cowboys were sent into the smoke to round up whatever animals they could find and bring them to safety.  Here’s a great article about it from the Williams Lake Tribune.  It was written about 10 days ago so I am not sure of the status of these animals right now.

Wildlife, too, will cope.  Here is a fledged eagle sitting on its nest in the smoke. 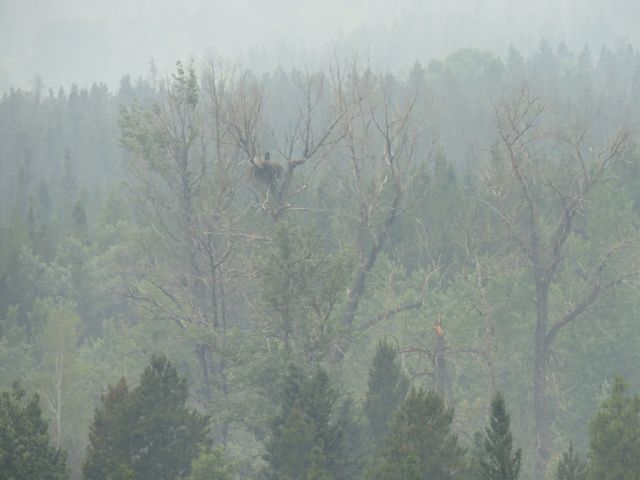 The greatest threat to its survival will not be the fire, but the fact that it is likely that one of its parents is dead.  When I drove to Williams Lake to pick up my friend the day the fires started, I found it freshly killed on the road right at downtown Kleena Kleene.  I suspect it had been hit by a logging truck: people knew the hauling was going to be stopped that day as the fire risk was too high and the loggers were frantically trying to get as much timber to Williams Lake as they could.  I notice that the Perkins Peak fire was started by a person – it’s a remote area and I don’t know who else would have been there except for loggers.

Before I was evacuated the first time, the humming birds were busy.  The young had fledged and they were fighting merrily around the feeder. 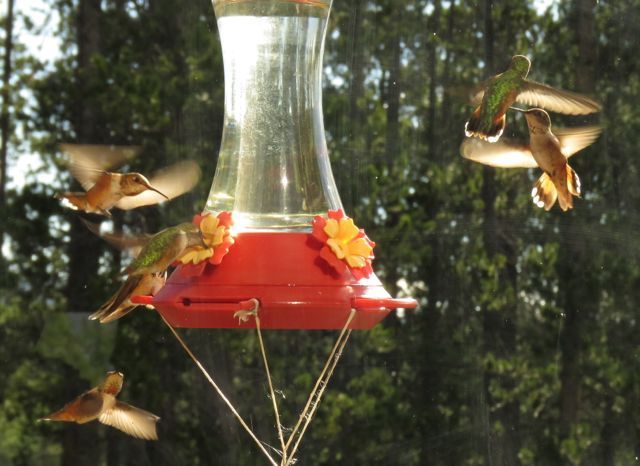 The feeder remained empty for about 10 days, but one of the first things I did was fill it and it wasn’t long before some of them were back.  They generally start tanking up at this time of year ready to move south. 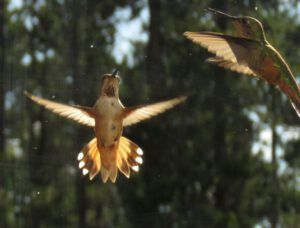 My first afternoon home, I went on to the dunes to see what I could see.  (For a reference see the first of the fire posts.  You can see the browned hill to the middle right.  The ridge behind the smoke is also burned. 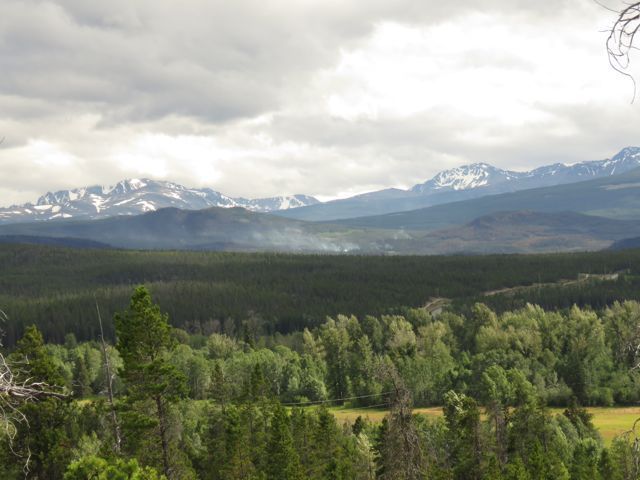 Highway 20 is in the middle distance on the right as well.  It curves to the left behind the low ridge and runs in front of the fire.

Up there on the dunes I could hear helicopters rattling – despite the good rain, a stiff breeze was stirring up the fire.  I couldn’t see movement from my lookout, but later, when the sun had moved round,  the machines flashed like dragon-fly wings as they caught the sun.  This picture was taken at full optical zoom from my deck – the chopper would have been 5 km away.  There was more than one and they bucketed continuously for 7 hours. 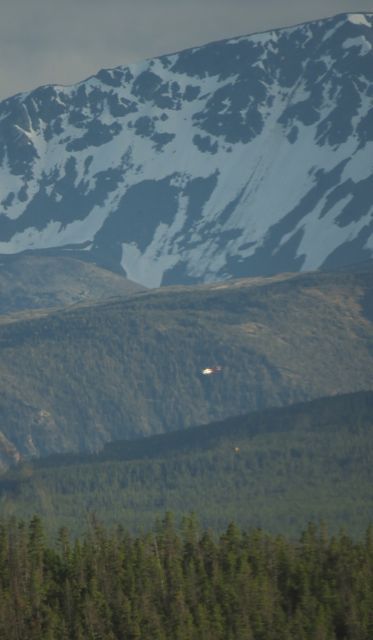 I didn’t dare unpack much but finally the day drew to a close and I marvelled at the luxury of being able to spend the night in my own bed.  The next day I drove to the fire. 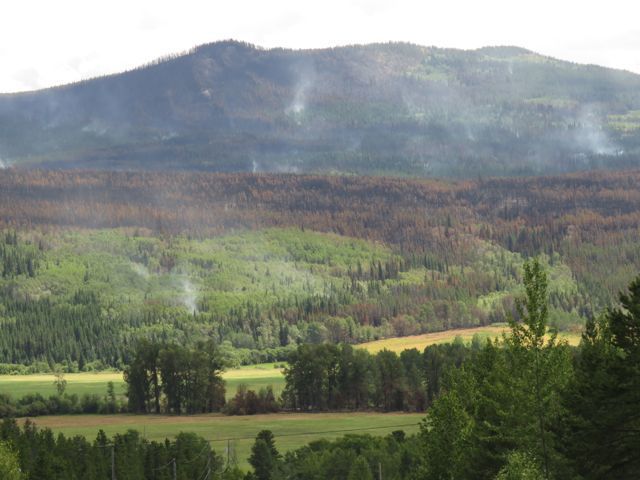 The deciduous trees look untouched – and indeed they survive a lighter fire better than conifers – but you can see that there is still plenty of smouldering going on between them.  Contrary to what I was able to deduce from the fire sites, the flames had crossed the Klinaklini River near the highway.  No doubt that’s what the crew working at the Kleena Kleene dump had been dowsing. 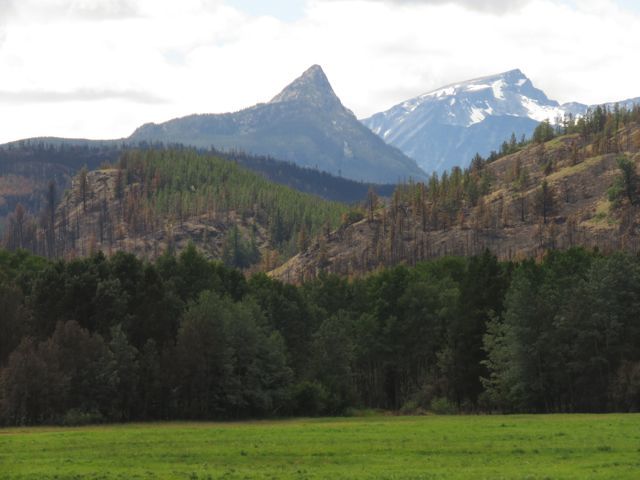 (Finger Peak itself looks a little singed on top!) 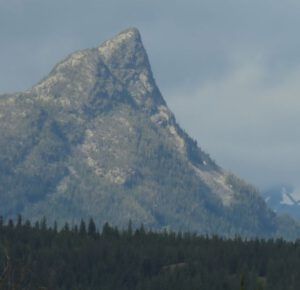 Contrary to what I had believed from the Modis (heat sensor) site, the fire had not crossed the road.  The satellite registers heat after all and the hot temperatures would extend far ahead of the fire when the wind was strong.  Although orange and red are very useful indicators of the activity of the fires, the yellow never goes away.  Once Modis records a fire, the yellow will stay there throughout the year and not disappear until January.  The site recorded only yellow when the helicopters were bucketing for 7 hours so when you see that colour, you have no idea if the fire is still active or out.

The following morning was dribbling rain a bit, but then it cleared.  No sign at all of the fire behind Finger Peak. 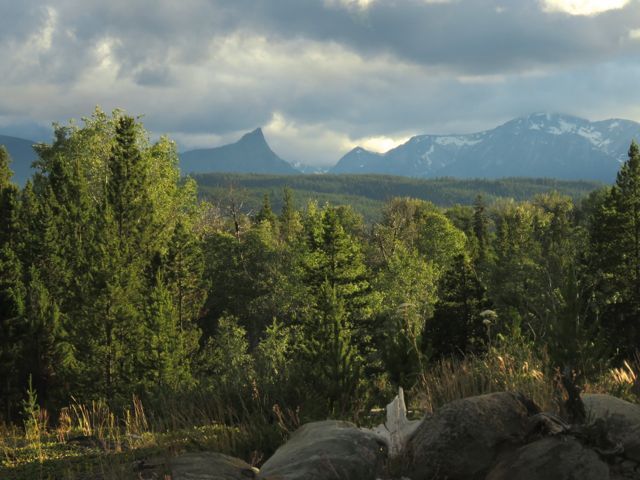 The rain had also filled my pond, which had looked half empty when I had last seen it. 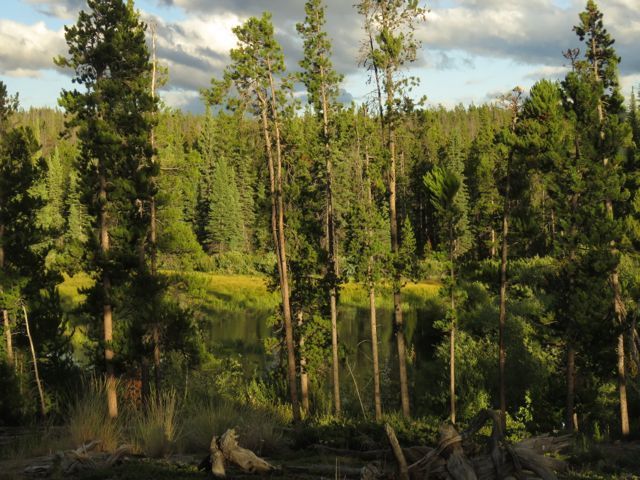 And this is where we stand.  Helicopters fly around once or twice in the afternoon, and heavy machinery is working at the eastern end, where the fire is most active, to bulldoze fireguards.  The forecast is for climbing temperatures again and there are thundery-looking clouds on the horizon – not good news in either case.  At least we have personel in place now.  I unloaded the van somewhat this morning, but containers and totes remained unpacked on the floor.  There is no guarantee that I won’t have to leave again at short notice.  It ain’t over, as they say, until it’s over.

Here is another article from the Williams Lake Tribune with spectacular photos of the fire taken by one of the pilot’s sons (grandsons?)

Not all local news is good, though.  South east of here is a sacred lake that Teseko Mines has wanted to drain and use as a poison-holding pond for a massive open cut mine for gold and copper.  Their claim that the chemicals won’t leach into the river system is a joke.  Twice the first nations people and others have fought Teseko Mines through the courts and finally defeated them at supreme court level.  They and anti-mine volunteers work for countless unpaid hours battling the industry’s highly paid lawyers.  Environmental supporters say the mine would be a disaster.  Industry says it will not.  All I can say is – one of them has to be wrong.  Which means at the worst that one side is deliberately lying (I’ll leave you to guess which side I think that is) – or at best: nobody knows.  And if they don’t know, they have no right to go ahead.

The supreme court decision always had a little clause at the bottom.  “…unless Taseko Mines can come up with a more environmentally sound proposal.” We have just heard that the BC government has allowed Taseko Mines to start up test drilling again.  This is absolutely terrible news – and the timing could not be more cruel.  Four of the six nations involved are currently evacuated from the fire.  I know myself that thoughts of the fire and its consequences have totally consumed me these last 2 and half weeks – I have had little energy for anything else.  For the government to launch this at all is unbelievable – and especially disgusting right now.