A bit more rained then a frost – because of the moisture we had a marvellous display of mother nature’s Christmas lights. 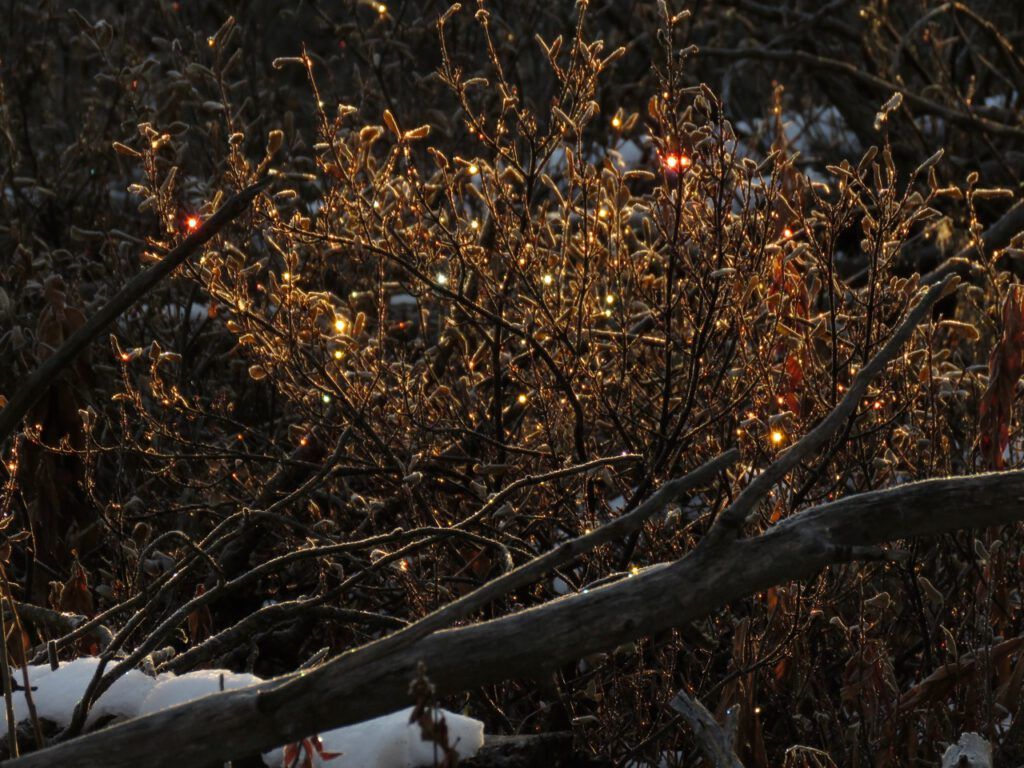 They can happen only when the sun is low.  You have to point the camera to one side or the other, and focus on something close. 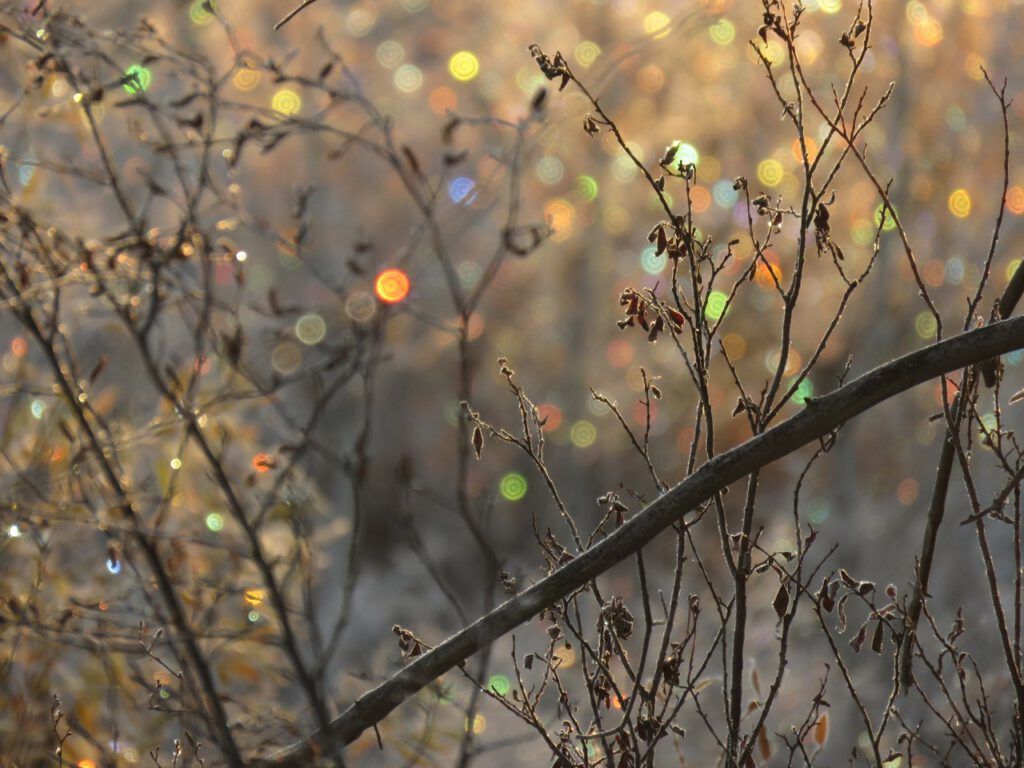 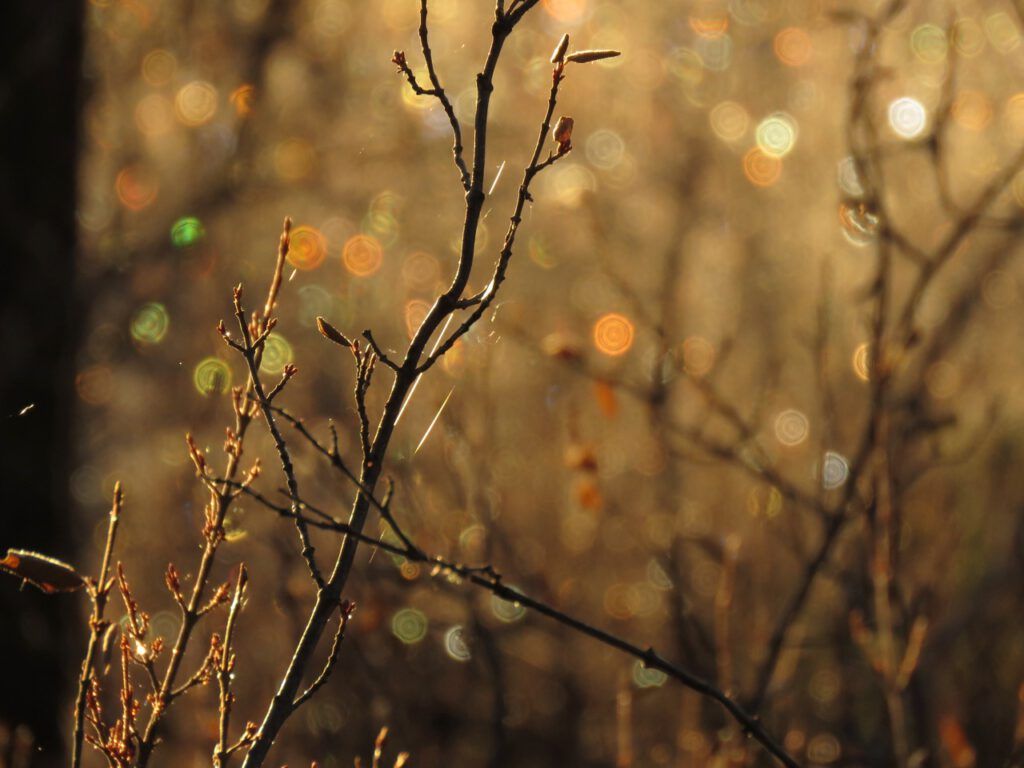 The ice crystals are always hexagonal. (Raindrops are round.) 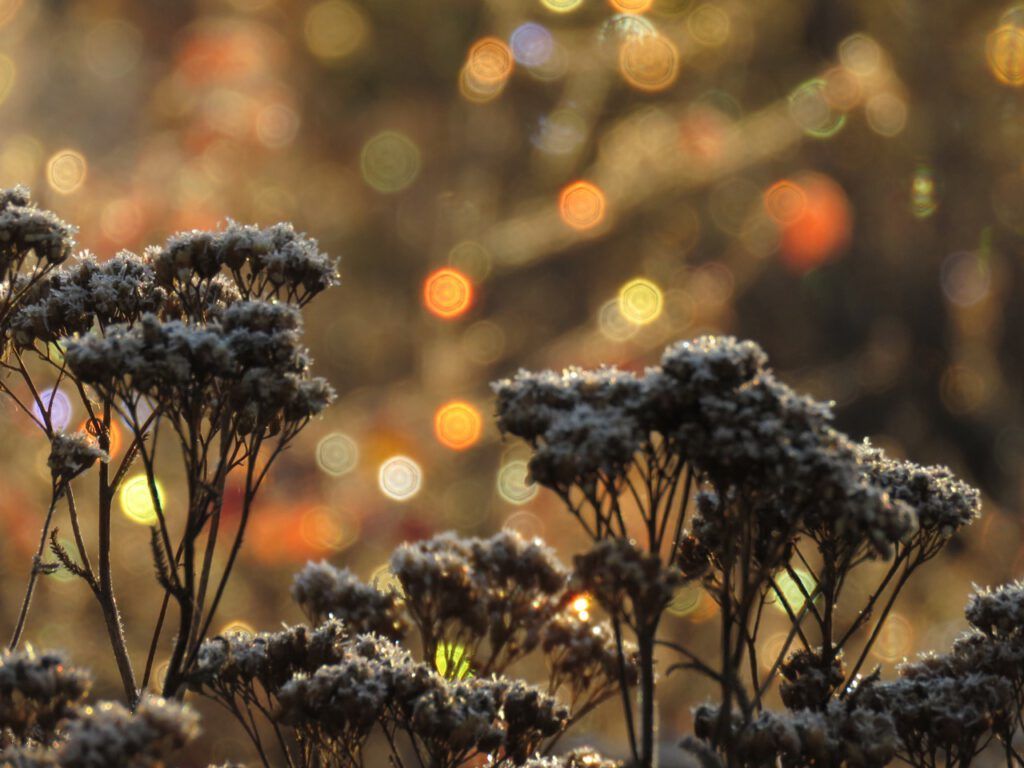 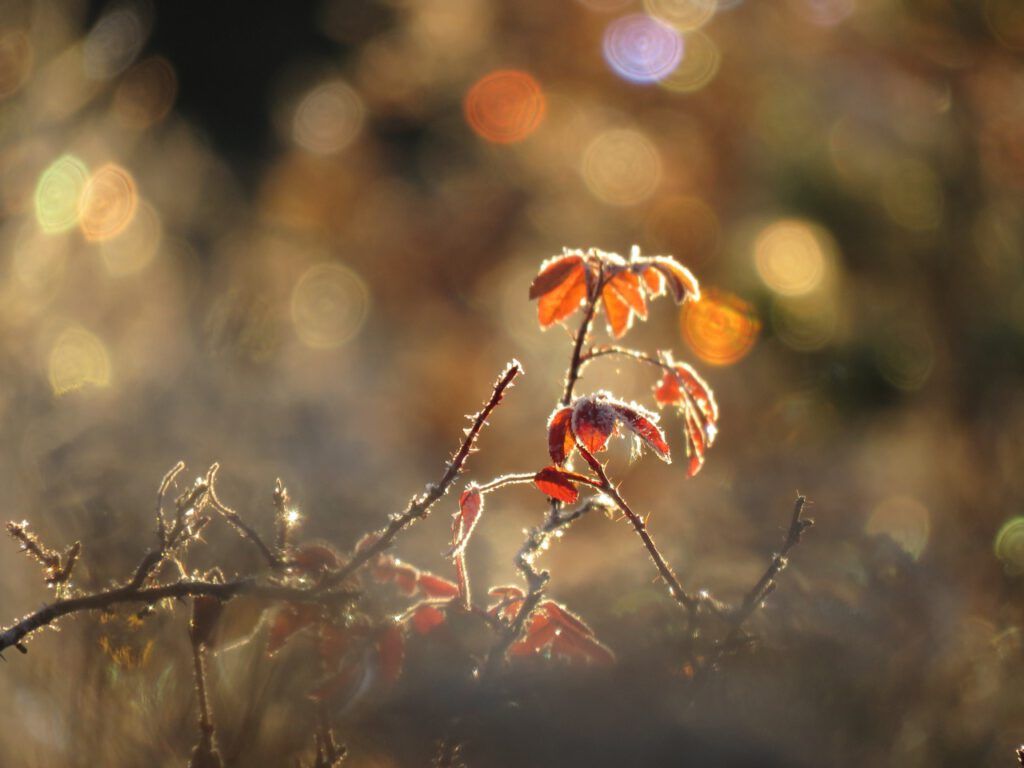 Here is the landscape I extracted them from. 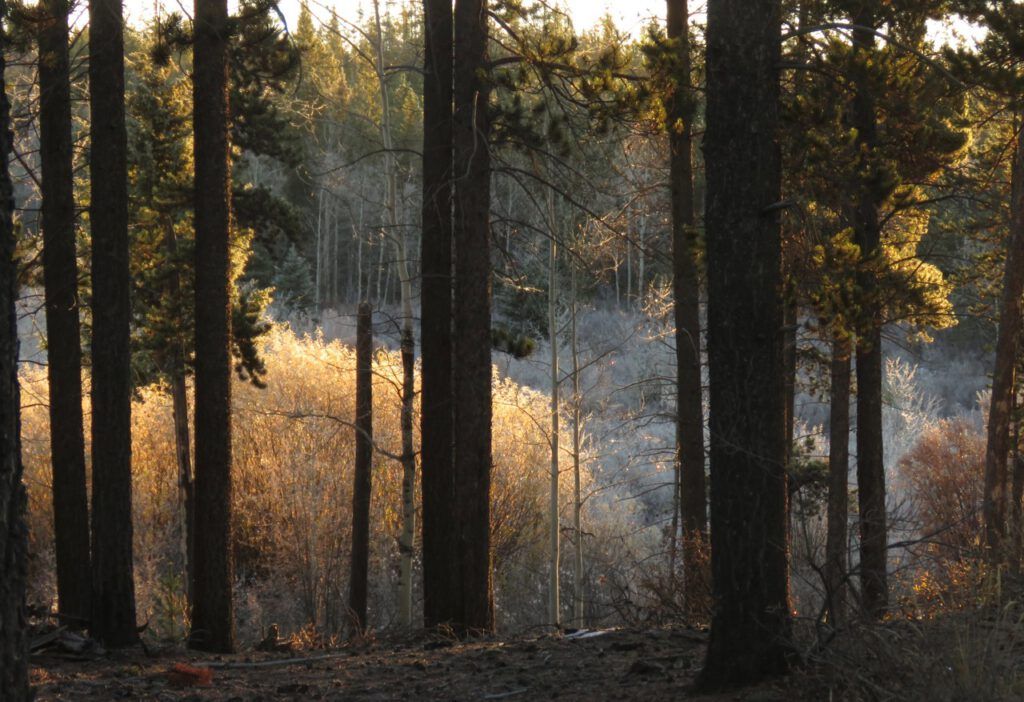 I always receive an invitation to Thanksgiving at the Precipice.  It was early this year – and it was raining again. 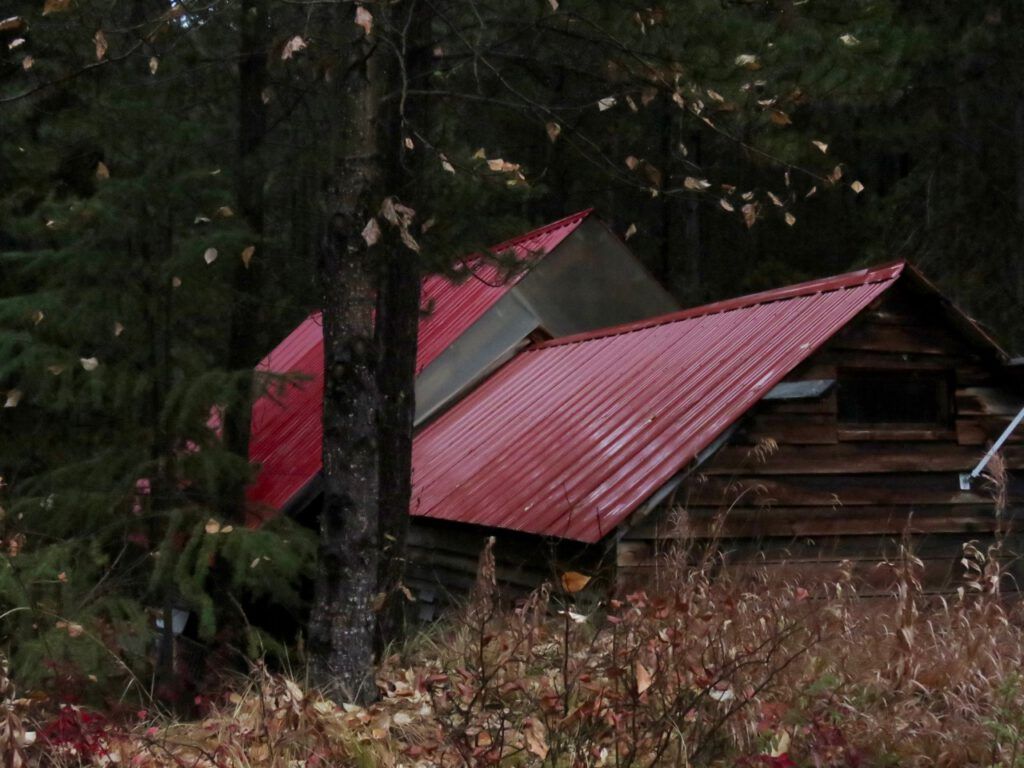 Precipitation eased off in the afternoon, and there was the usual lively croquet game made much more interesting because of the uneven ground.  (We have new seats around the fire – courtesy of trees killed by the forest fire last year.) 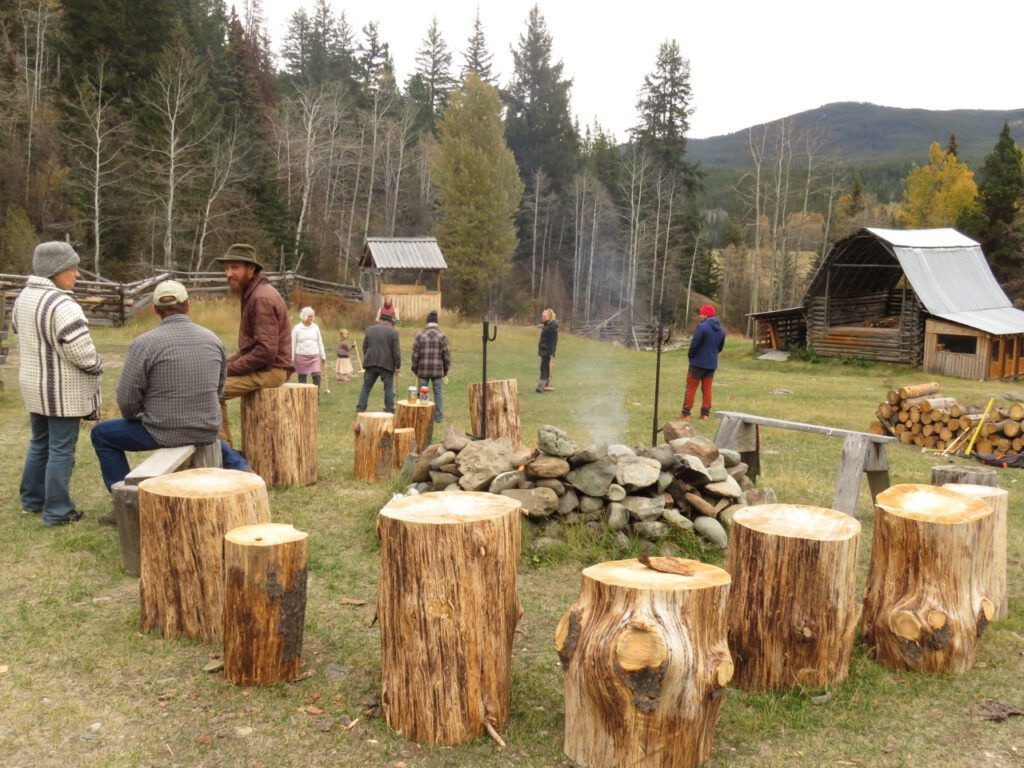 Here is Fred organizing the game.  Fred and Monika have a market garden at the bottom of the Precipice Valley.  Fred is co-author in the up-coming Fire book. 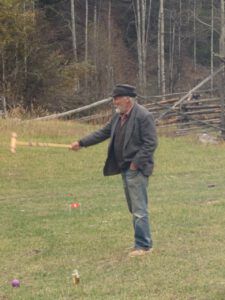 As usual, Pat had found an enormous, 22lb organic turkey – here is Lee showing it off. 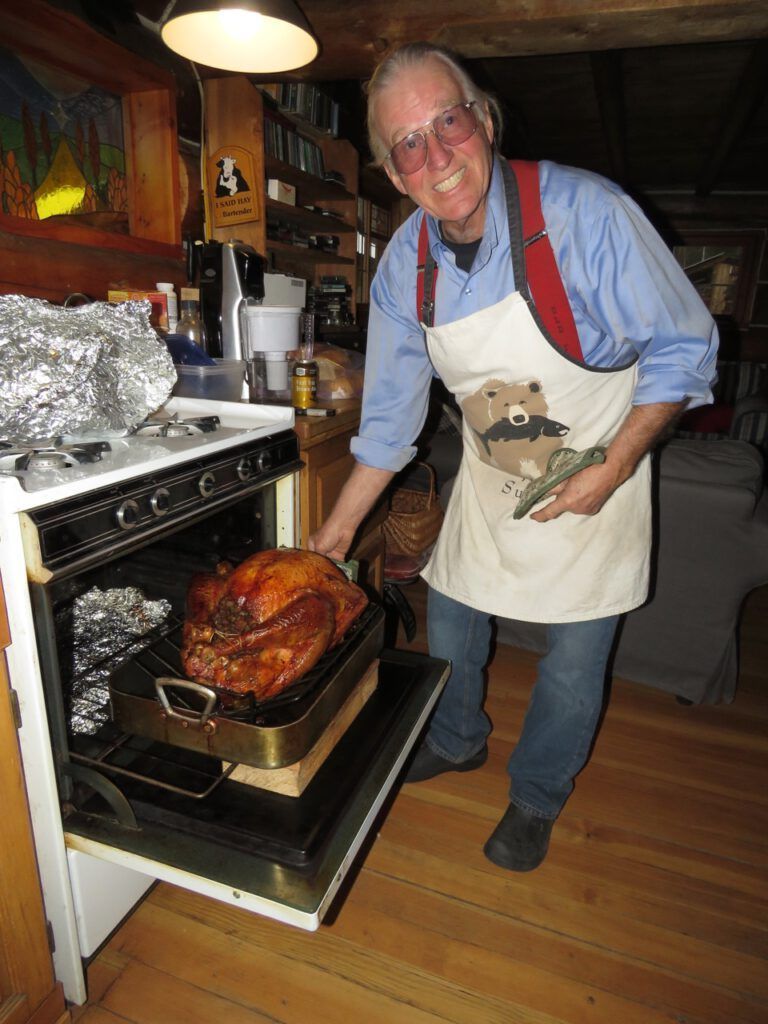 Pat had laid a gracious table. 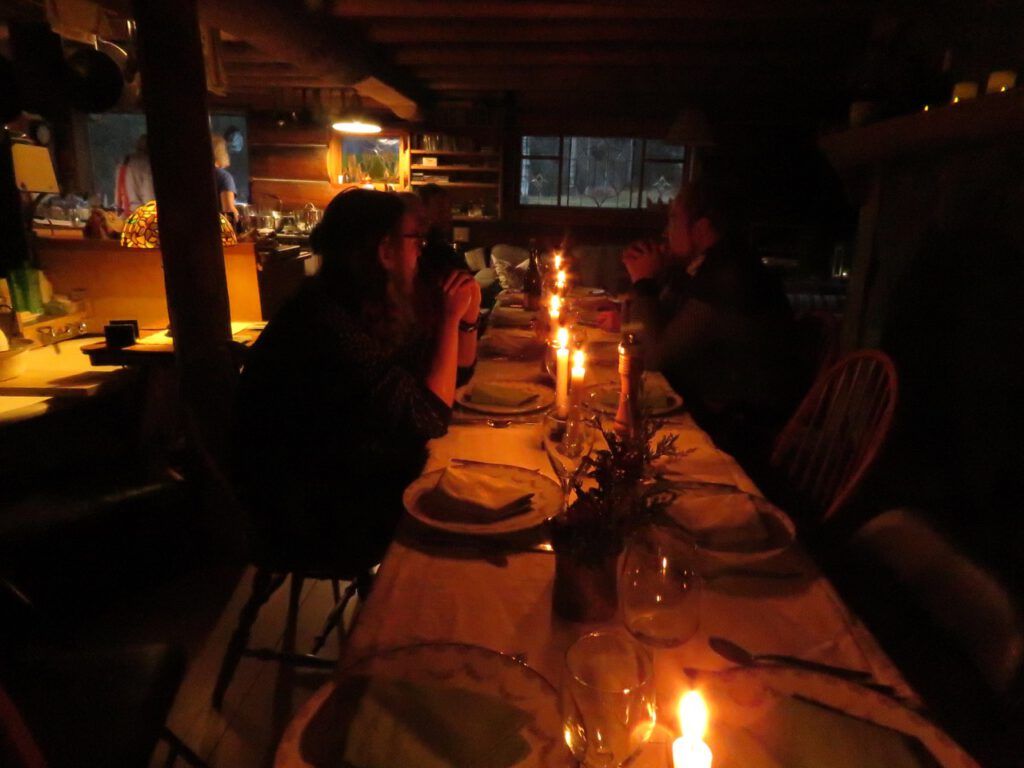 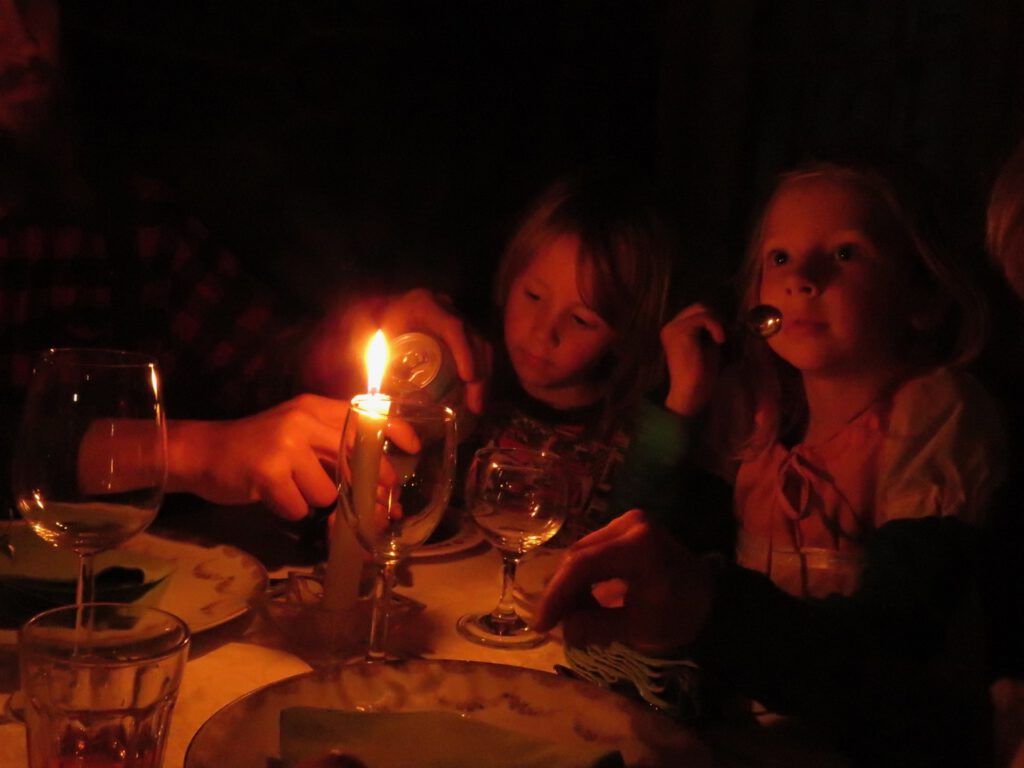 Apart from the Precipice residents, there were a couple of outsiders like myself – and no less than four volunteers who were all exceptionally musical.  I did not know that Friedi was so talented.  An Israeli music student is on the keyboard.  (She is trying to read her phone in the dark!) 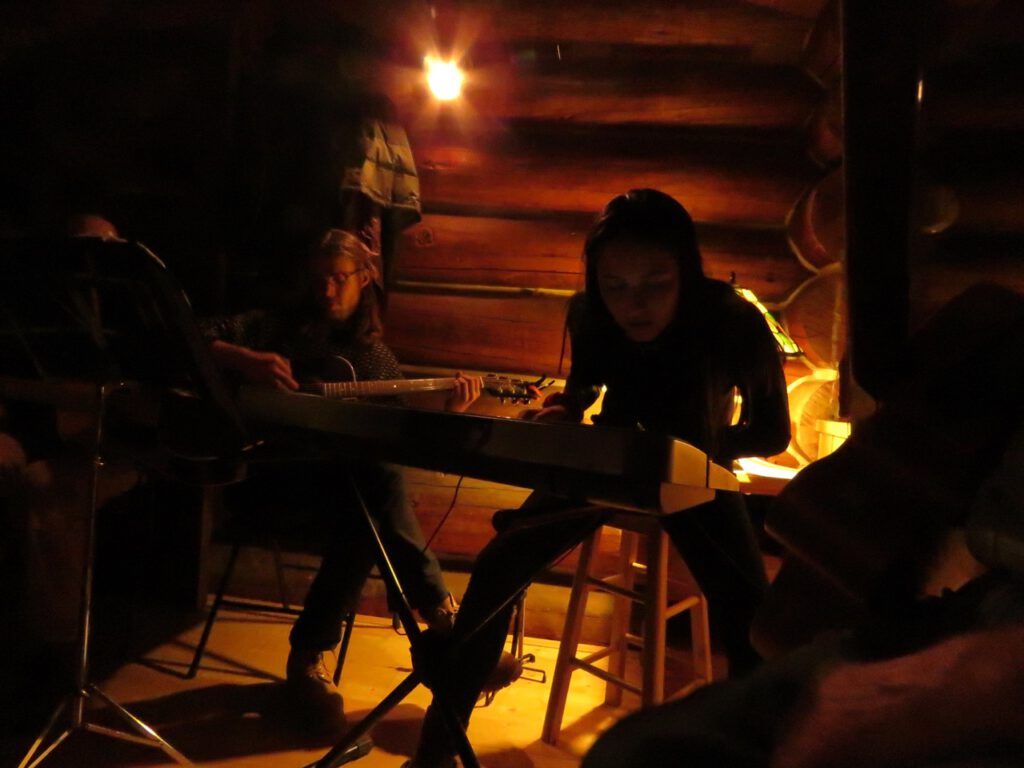 Then, after all those weeks of smoke and rain and snow, we had an incredible Indian summer for more than ten days.  We were burning in shirt sleeves. 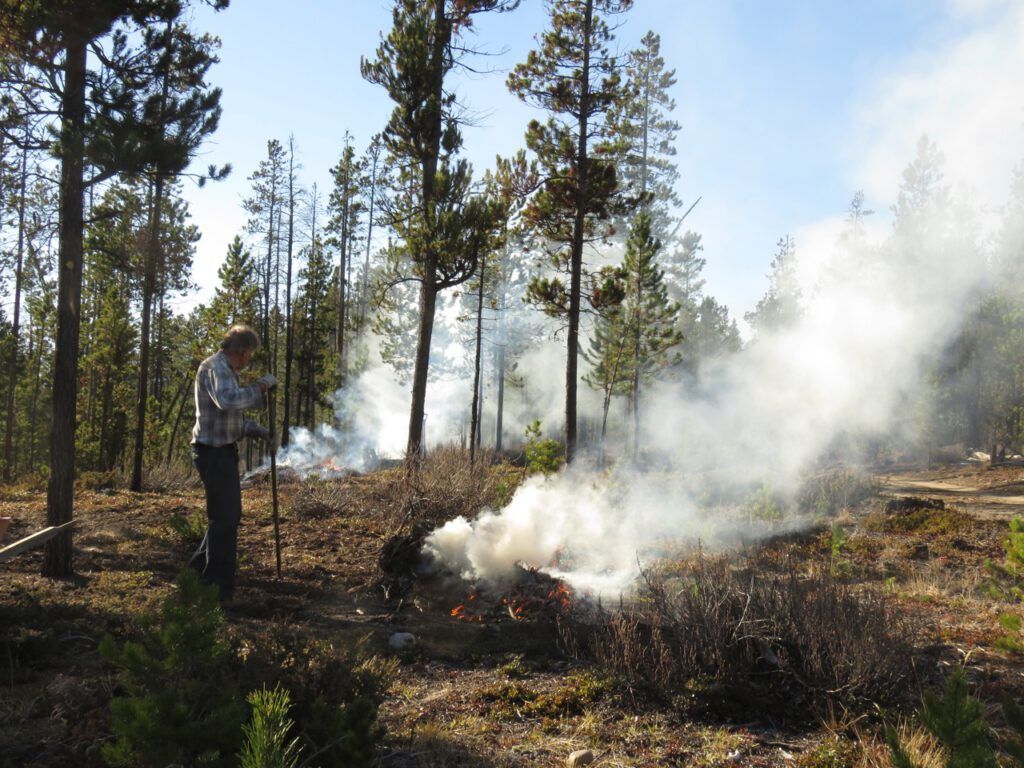 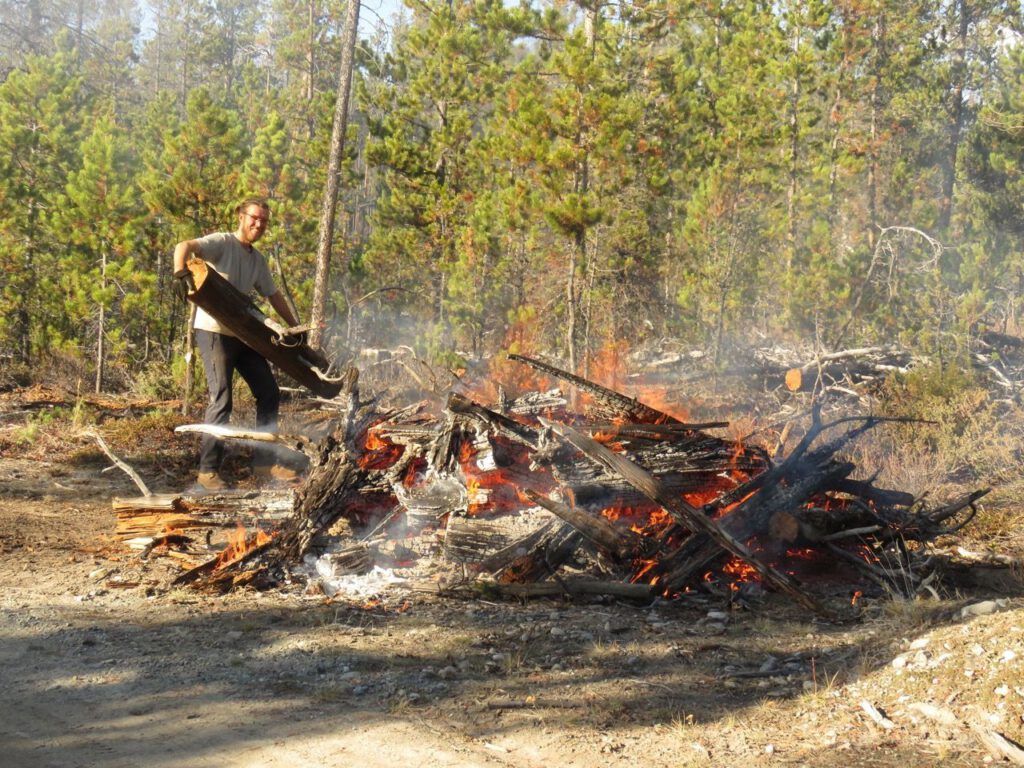 Friedi loves canoeing.  He often took himself to a lake on an evening, and even spent some overnights out.  However, I decided the weather was too gorgeous to let him go to Tatlayoko Lake alone. 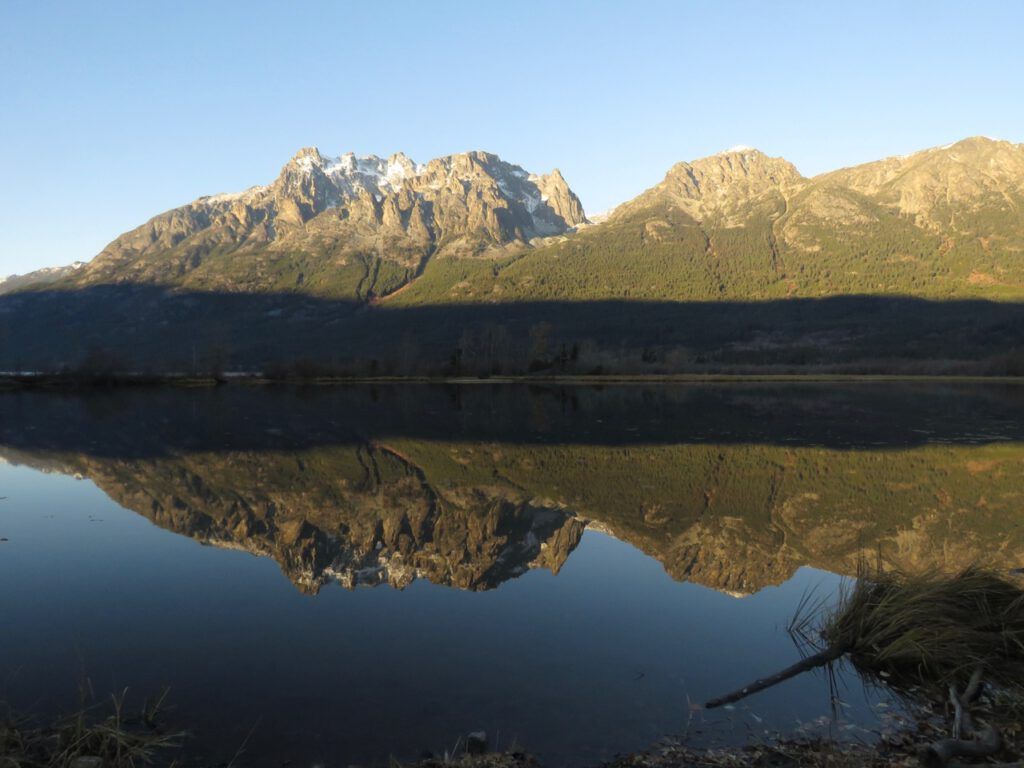 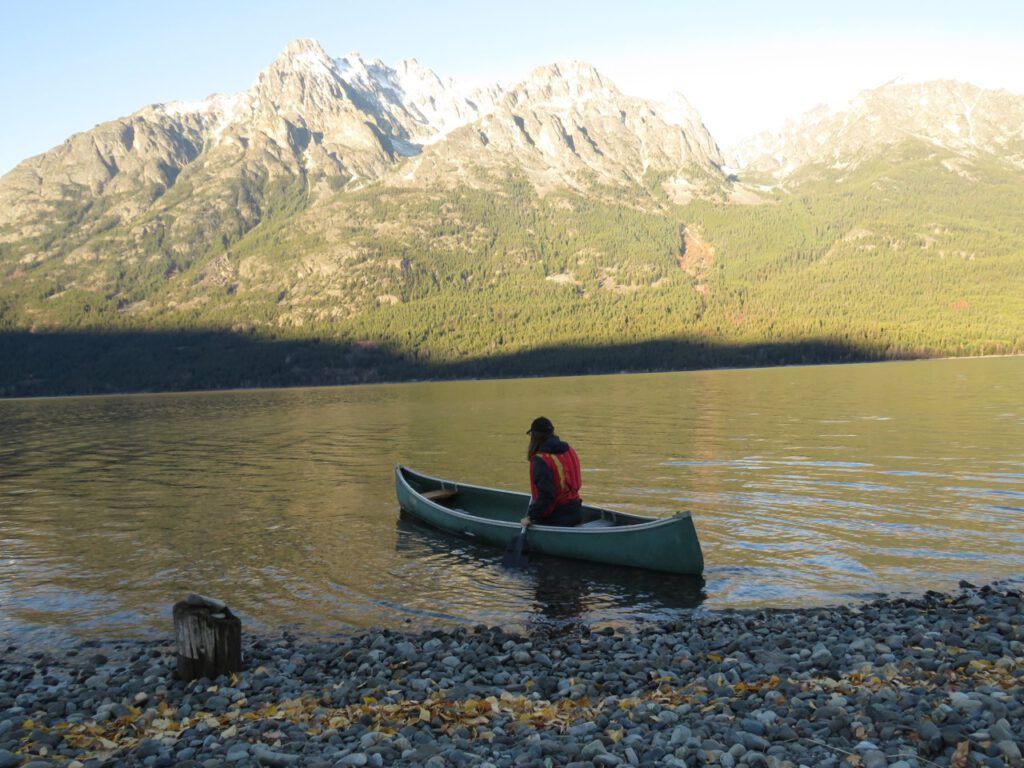 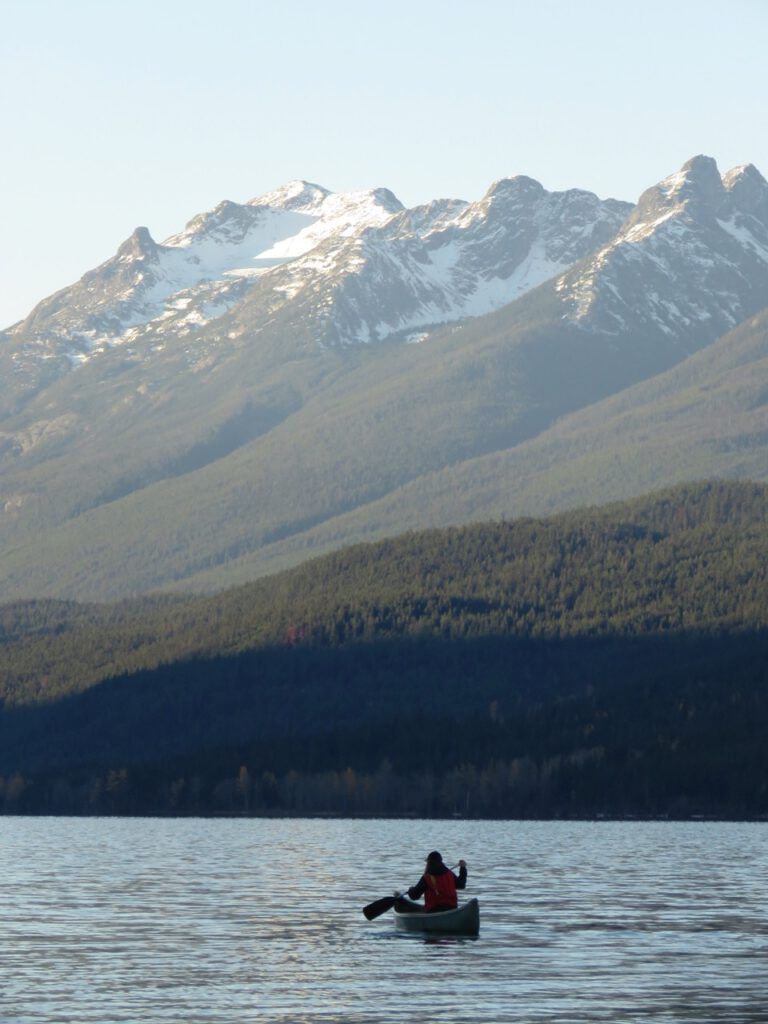 I was happy to putter along the shore at a snail’s pace photographing.  Here’s my version of a selfie. 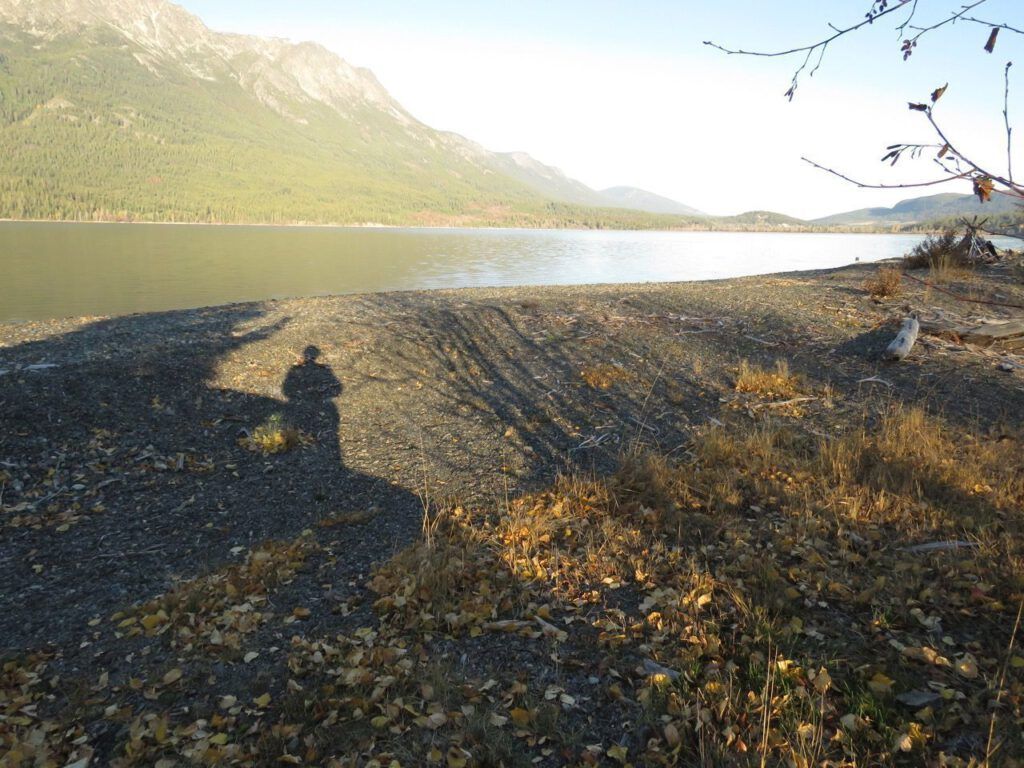 The low light made interesting strong shapes along the shoreline. 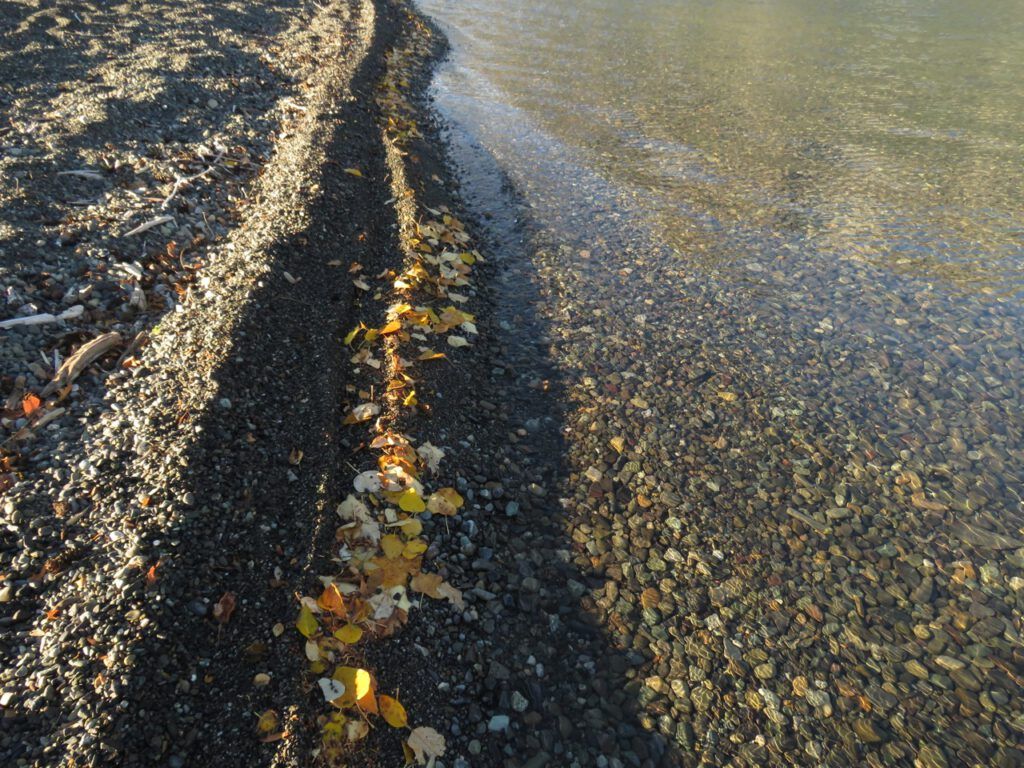 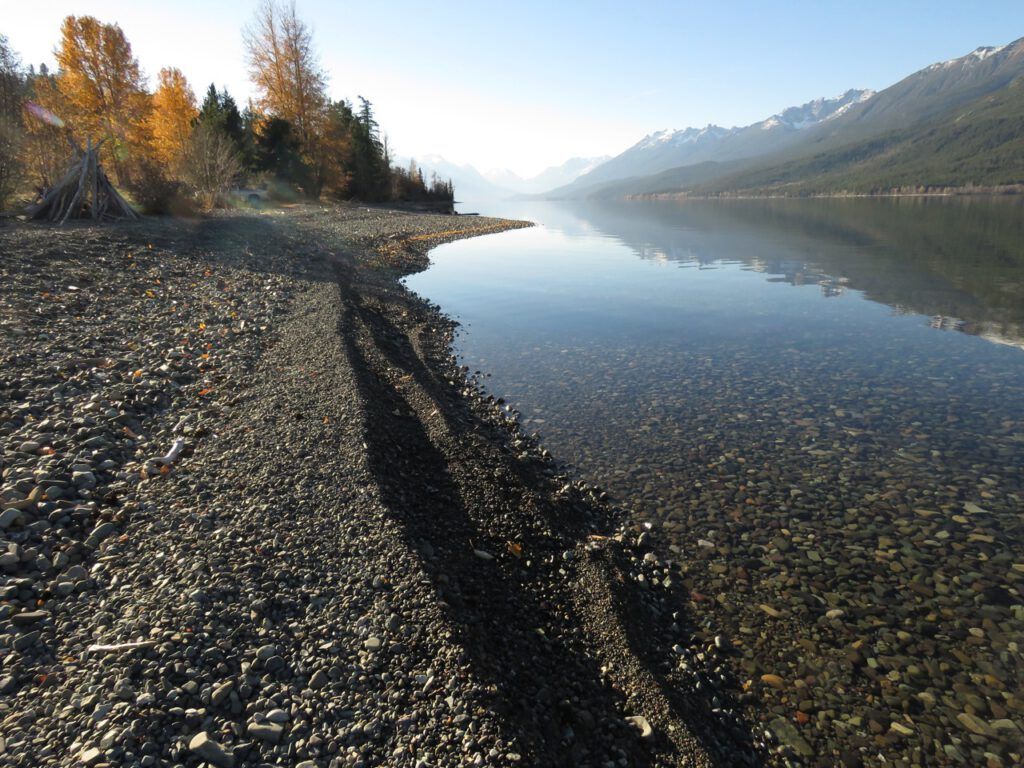 Nearby were mountain scapes. 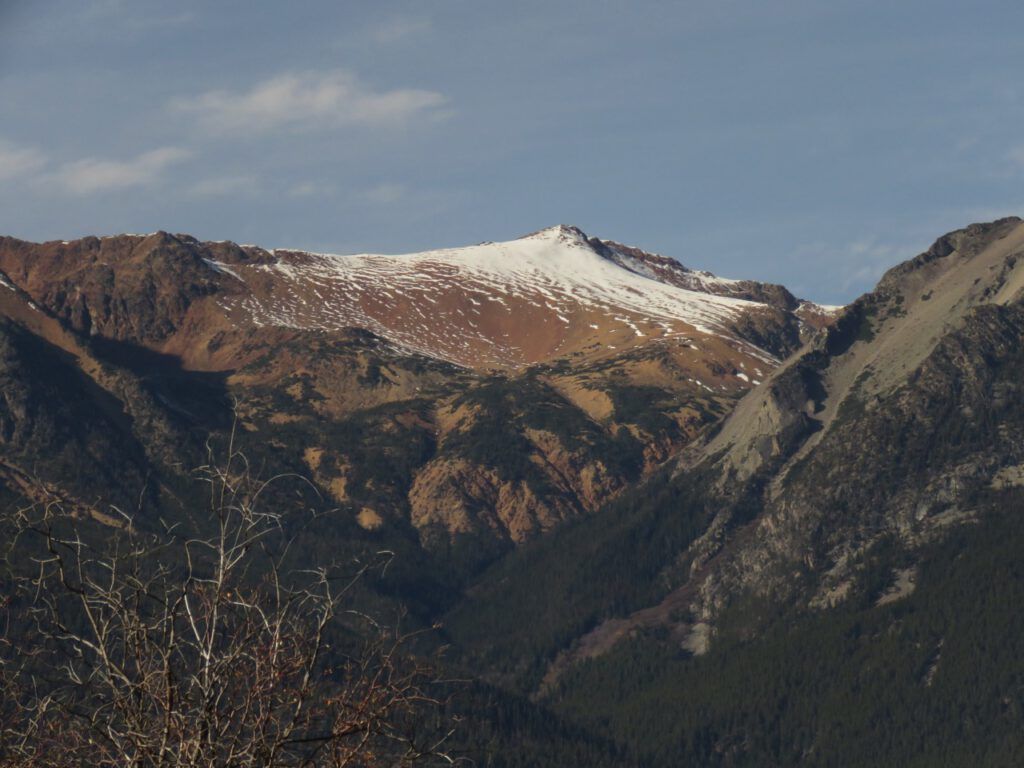 We were at the lake for several hours and saw two other vehicles.On his return, Friedi decided on a swim.  BRRRR! 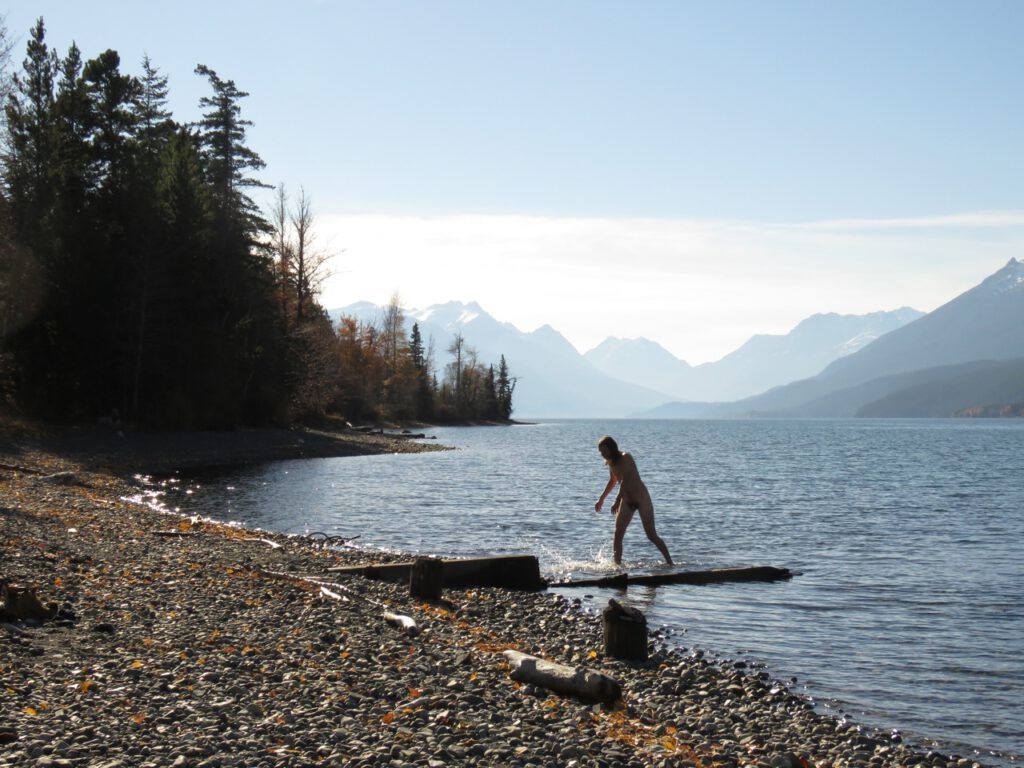 Soon after that, it was time to take Friedi to the bus at Williams Lake.  He had been an excellent volunteer and I wish he could have stayed longer.  However, alone-time is what I needed in a big way.

Every spare moment since last winter has been spent on the Fire book.  It has been a much bigger project than I have ever tackled before – it has been incredibly difficult to mix everyone’s stories coherently into the whole.  Most people don’t “do” email much so I had to print stuff off, give it to them, then chase them up when both they and I weren’t busy.  And when Fred and I first put our manuscripts together we had about 150,000 words.  Publishers like 80,000 as that keeps the shelf price below $25.  But even with a huge amount of slashing, we still have 93,000.  This is my excuse for posting so infrequently this year.

Normally I get a manuscript into the publisher by September.  I kept writing to them and saying I was doing my best – they know I am reliable – in the end I promised it to them by the end of October.  I finished writing at 6:30 p.m. on October 31st!  I don’t expect to hear for a while – they have to fit it in to their busy schedule.  Keep fingers crossed.