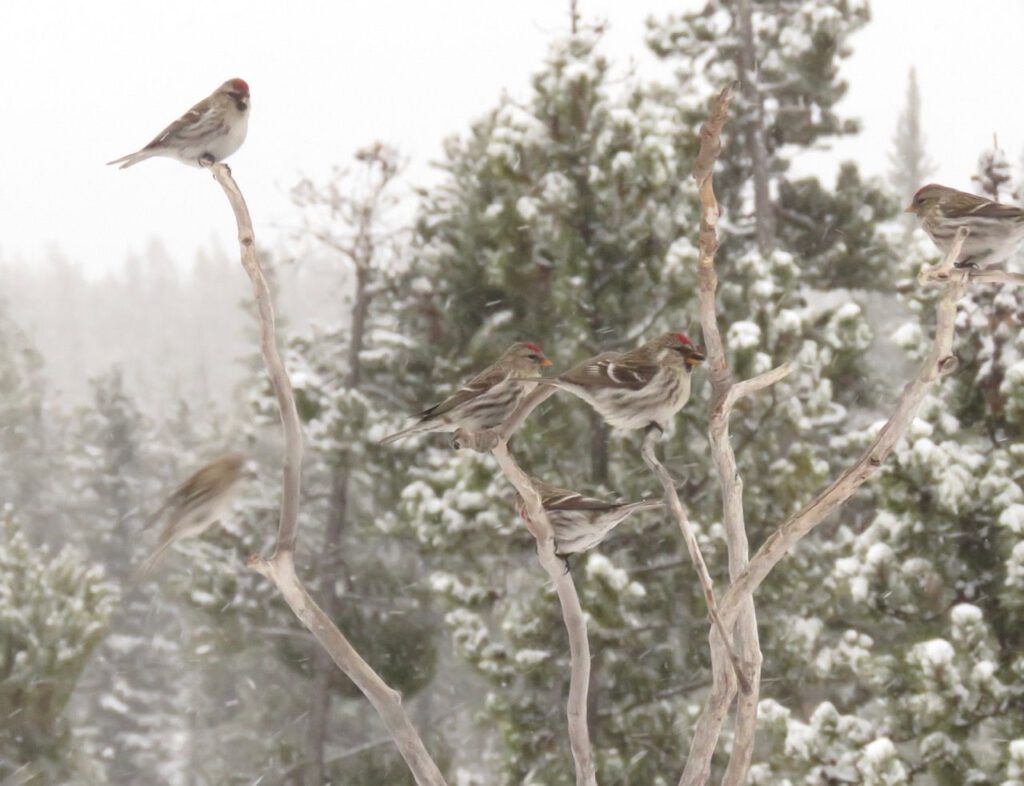 Mother Nature played an April fool trick on us.  On Easter Sunday, it snowed 4″.  Before that, we has a short spell  of quite spring-like weather.   The snow level dropped enough so that I could hang laundry outside for the first time this year.  I also dug a foot of snow off the cold frames (couldn’t get it all as the bottom was ice) and shut the lid so that they would thaw inside. 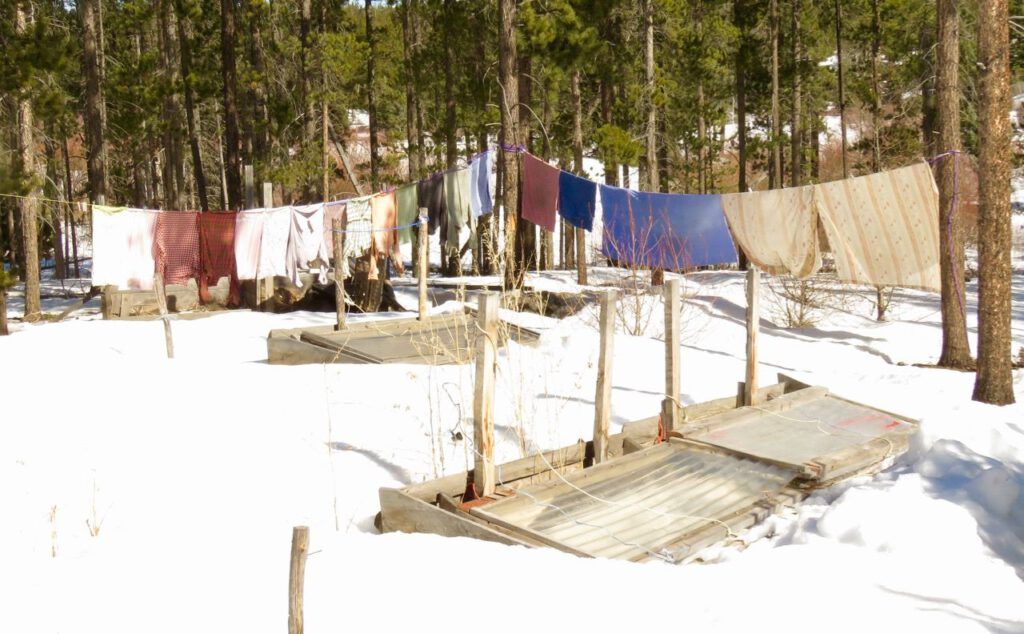 Birds started to move in.  A common summer resident, but very unusual at the feeder, was a flicker. 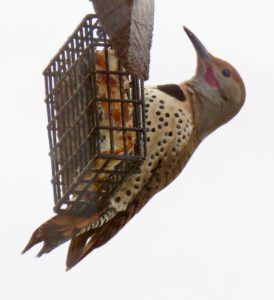 Sunshine brought clear nights and of course colder temperatures.  One morning, a dull feather ball skulked around the feeder.  As light emerged, I could see it was a varied thrush.  Obviously wishing it had stayed in warmer climes a little longer. 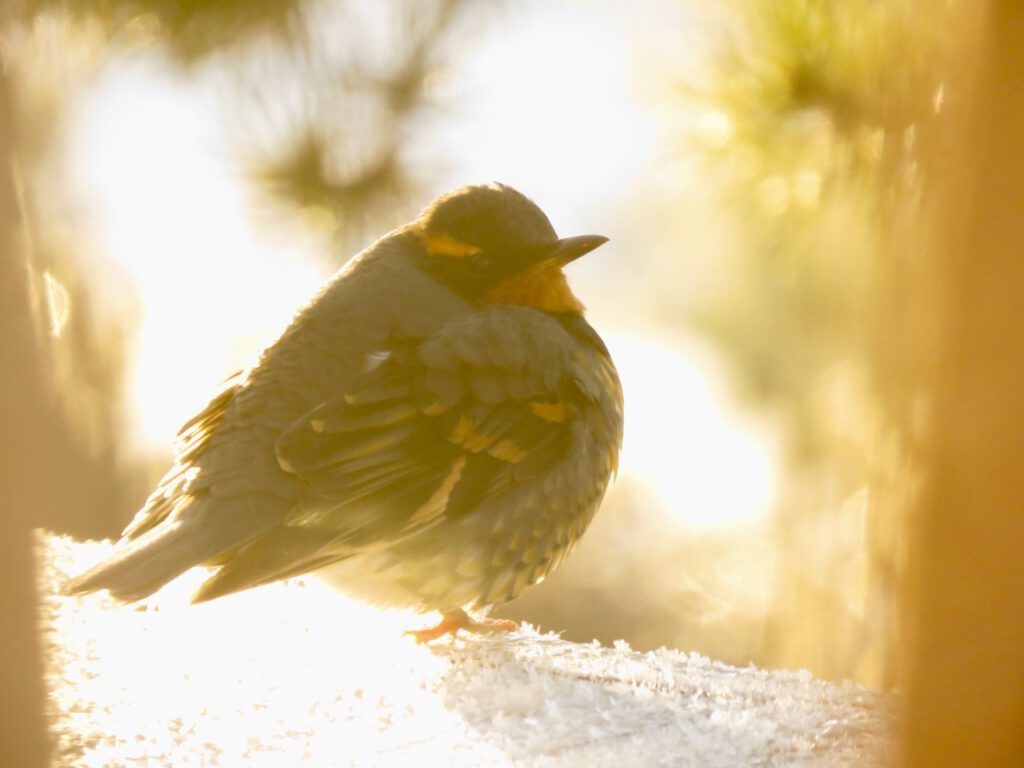 The strong spring sun shows the piles of winter grime in the house, but no point in spring-cleaning until the chimney is swept.  I shovelled the ashes out of the stove and spread the resulting brew onto the garden.  The dark colour will attract heat and I hoped to melt the snow a bit more quickly. 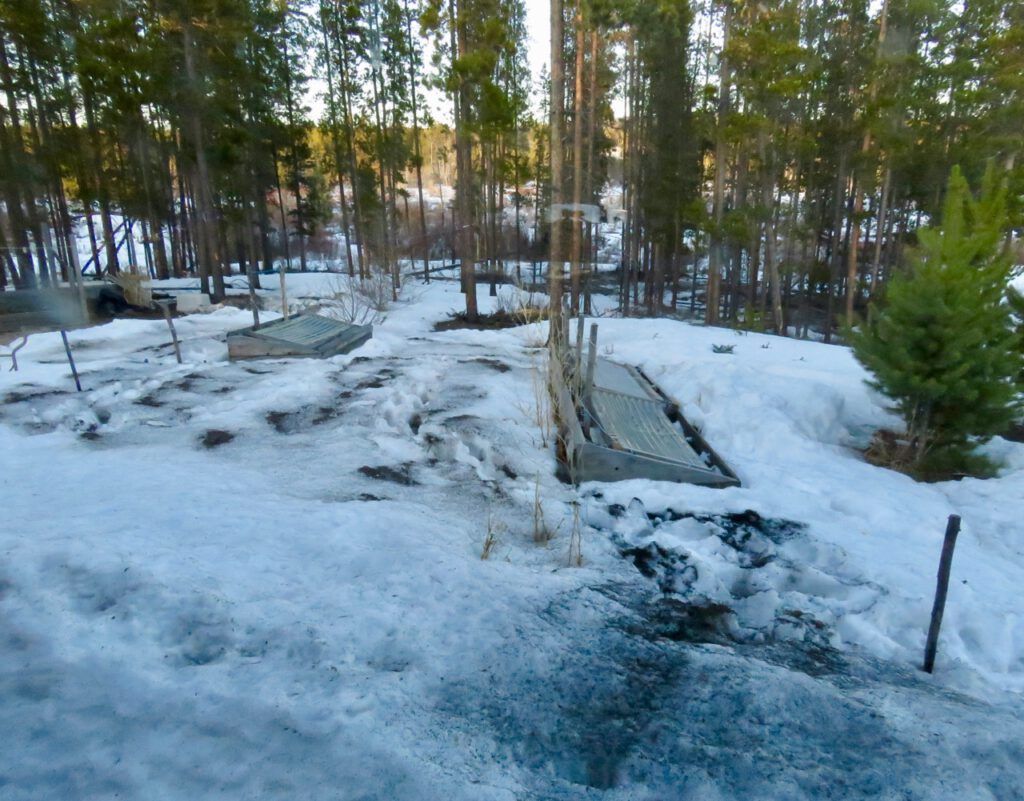 ‘Tis is the season of puddles on the road.  I have taken my van to the highway and am using my pickup with chains on to go back and forth. 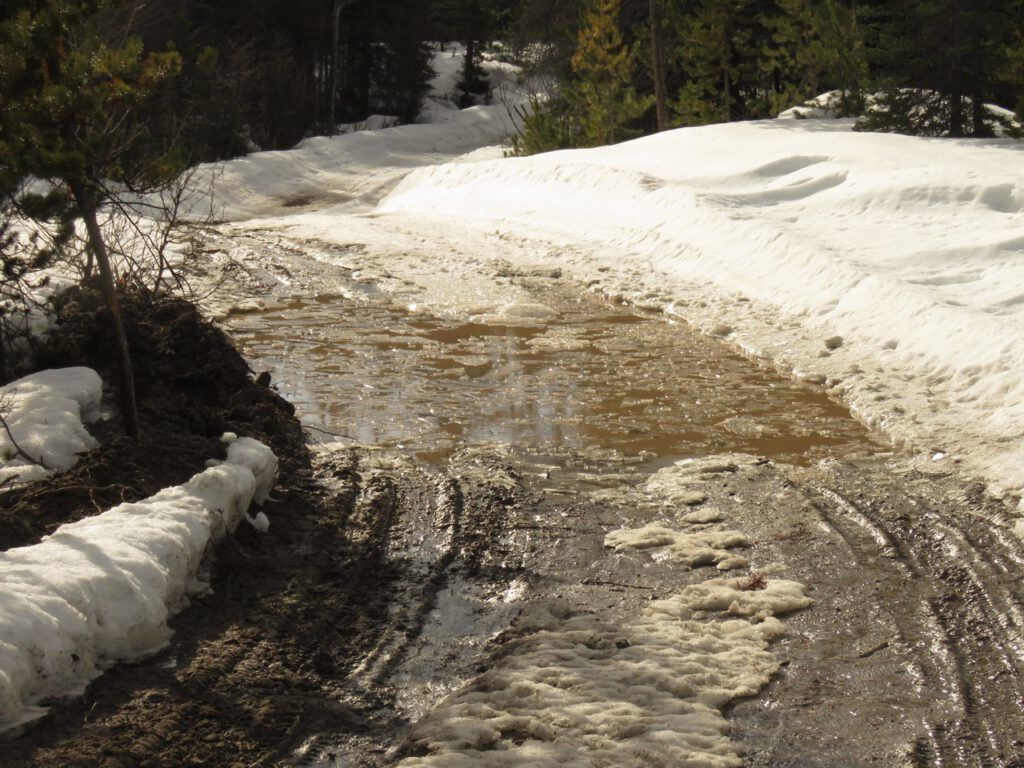 ‘Tis also the season of frost heaves.  By no means all of them are marked, but you can usually tell where they are by the skids of the logging truck tires. 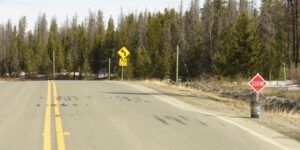 I have never seen so many snow buntings as this year.  They are hard to photograph – just like a whizzing bunch of white confetti.  These guys decided to huddle briefly on the phone line.  (Excuse the poor shot.)

A chipmunk ventured out. 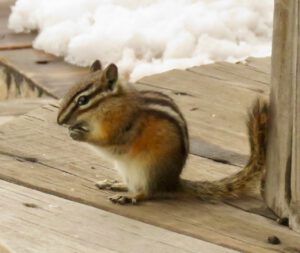 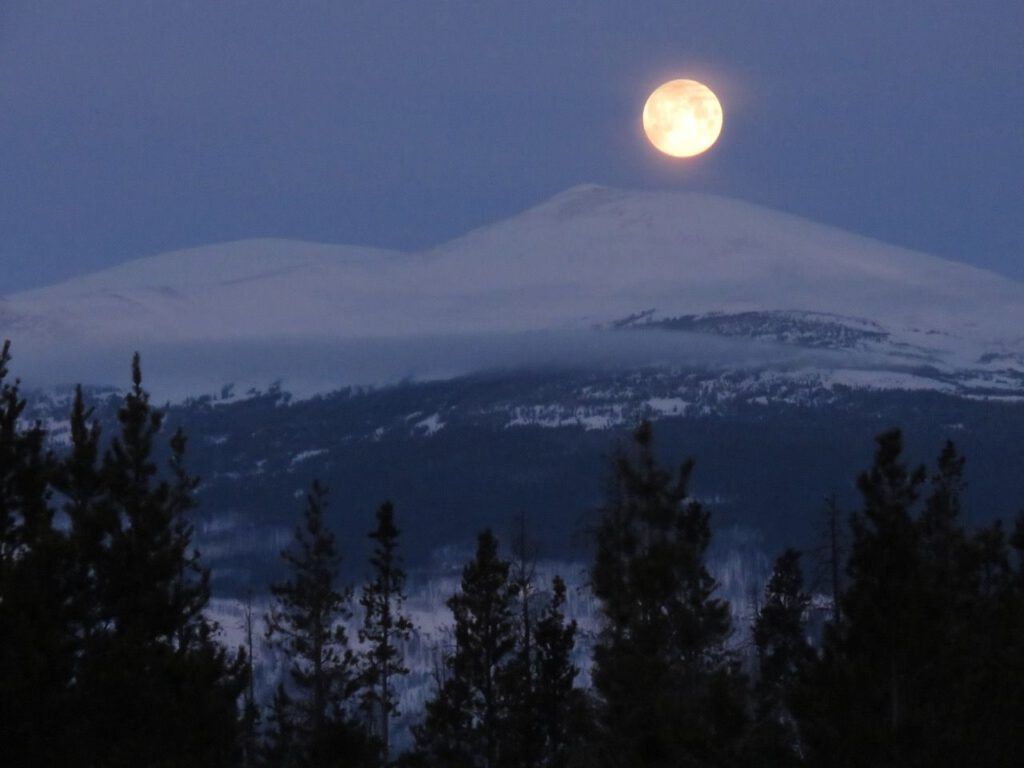 The sky was a bit hazy with cloud…. 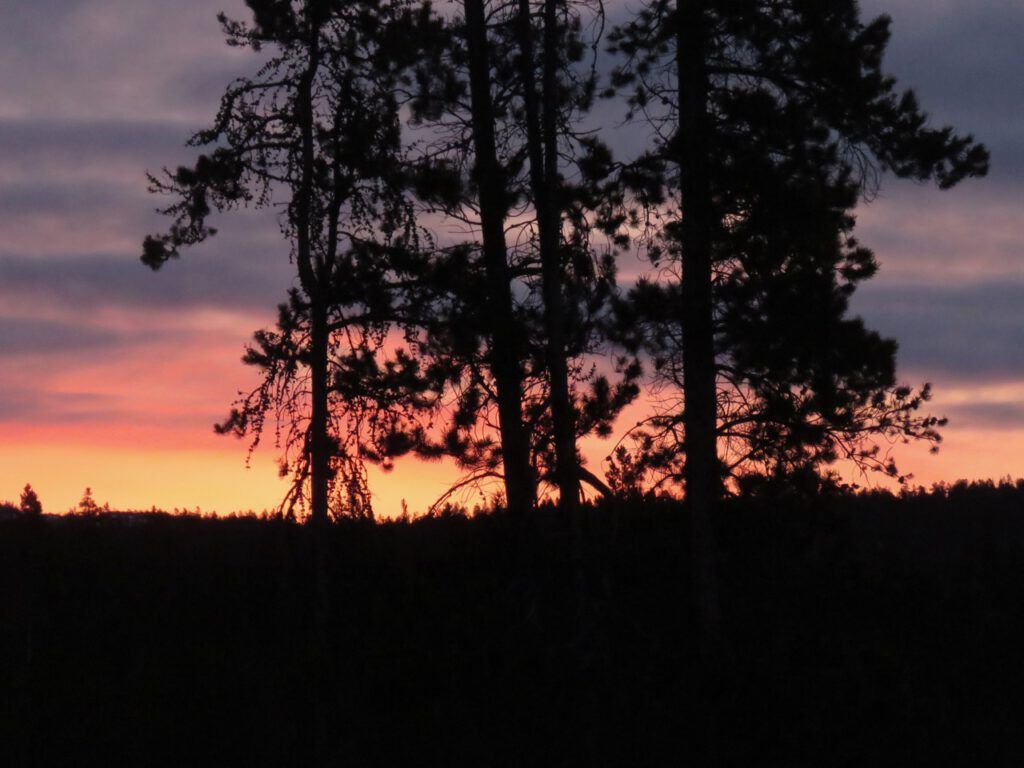 and so the pink colour on the mountain was pale. 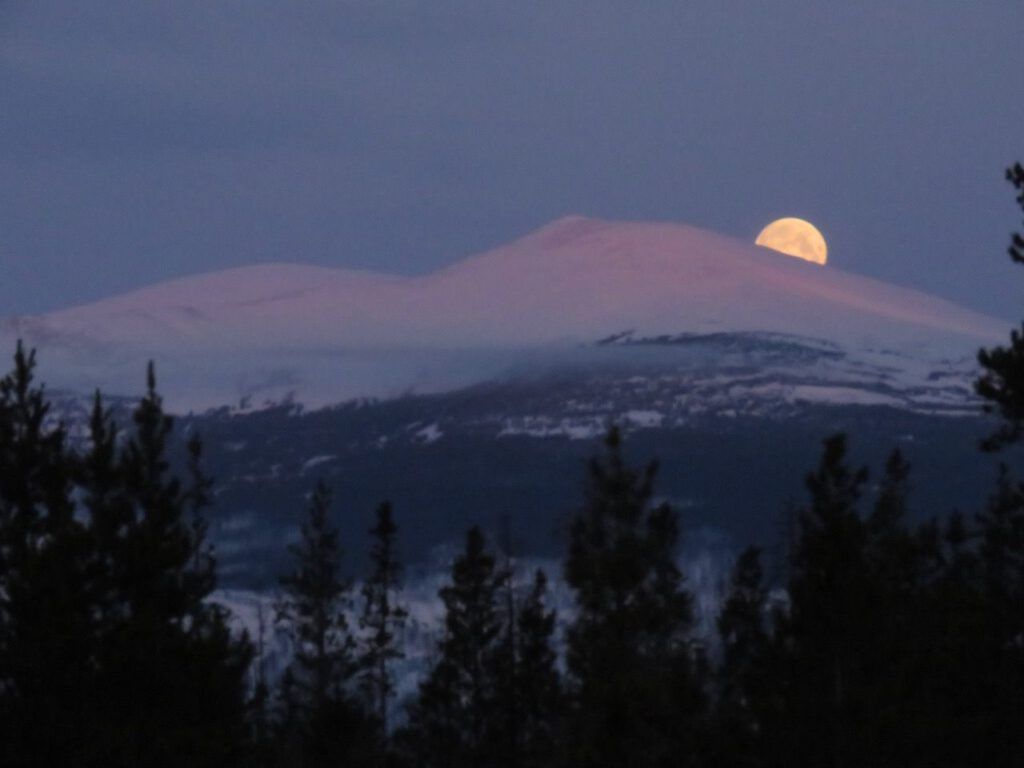 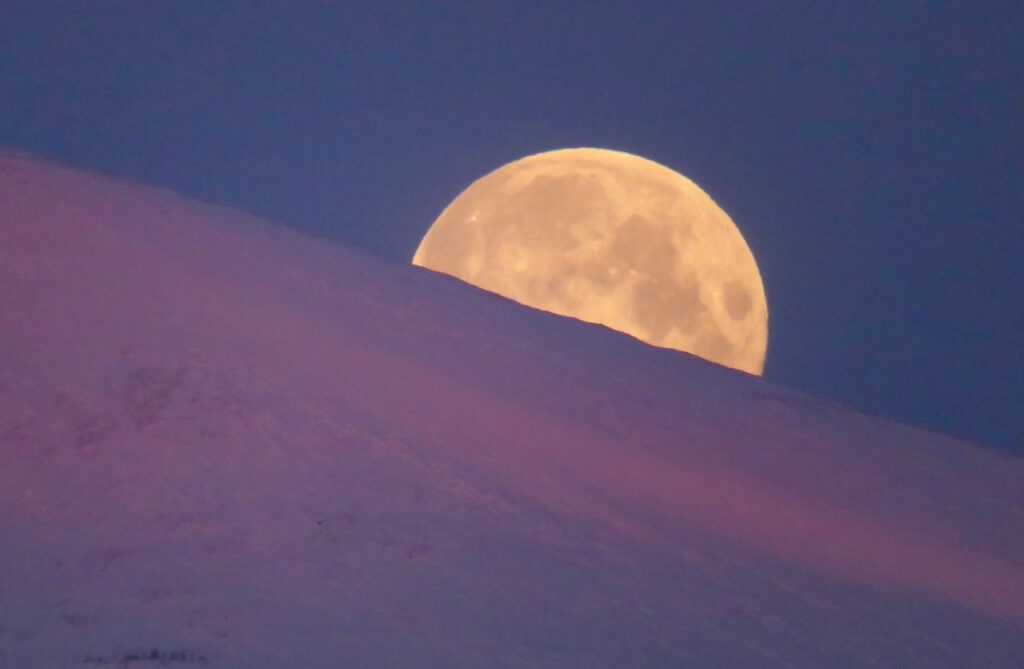 The nights were still pretty chilly, but the afternoons saw some warmth, and it didn’t take long to melt the ash-covered snow.  (I didn’t have enough for the whole garden, and you can see the difference.) The green on the left is kale; normally it doesn’t winter; these are merely frozen leaves from last year.  It did sprout anew one year, and although it has been a very long winter, a foot of snow fell at the end of October before the ground was frozen too hard so I am keeping my fingers crossed for this year. 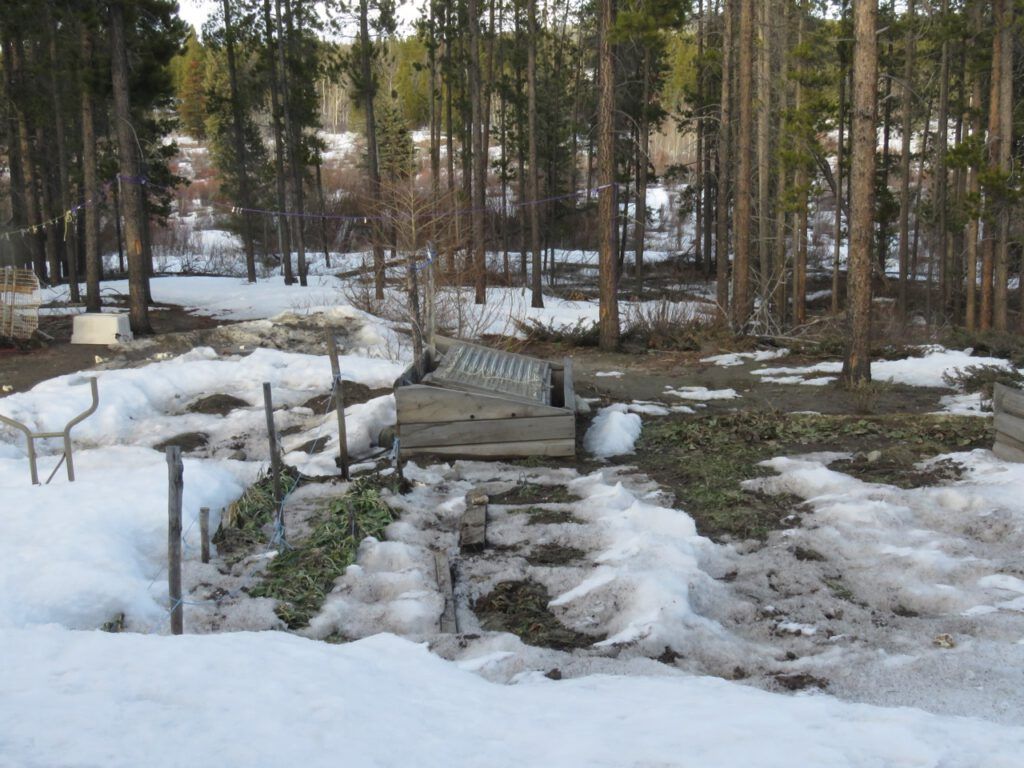 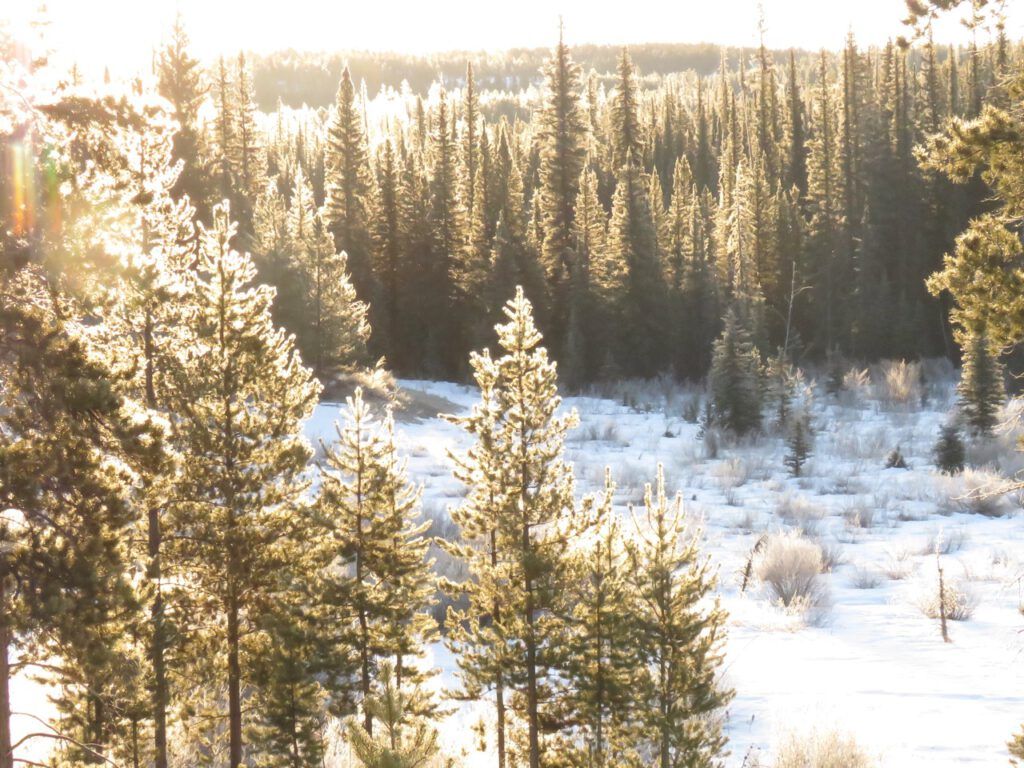 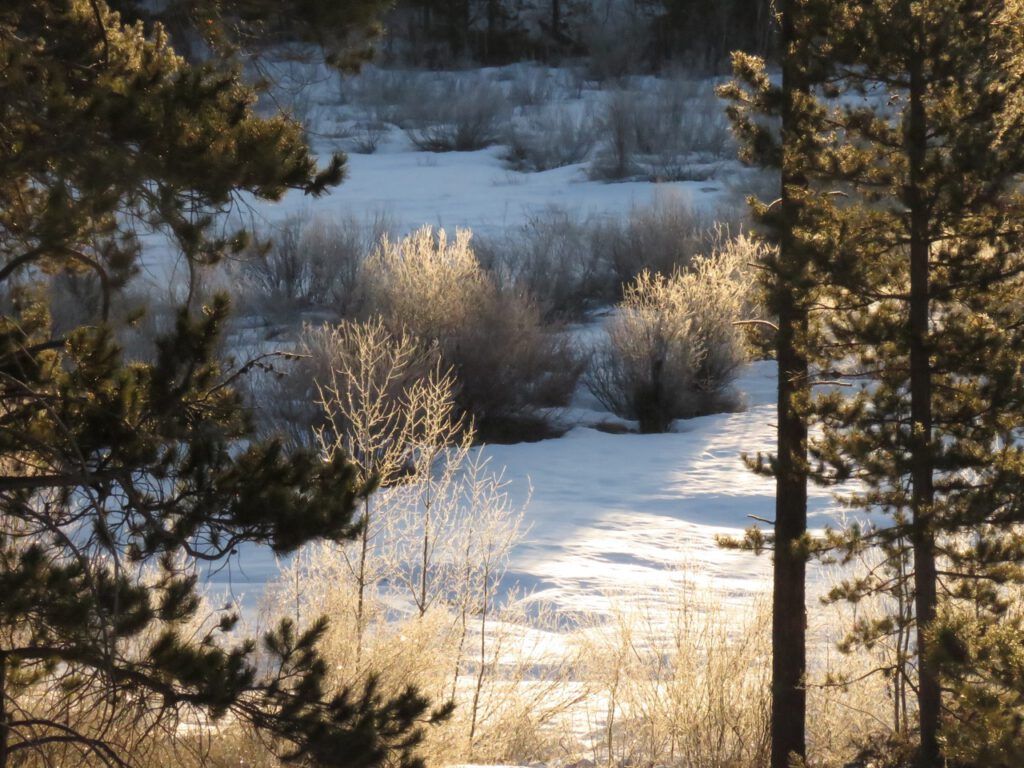 But by afternoon it had clouded over, and then the weather turned bitter.  Wild winds and temperatures as low as -19C.  And this morning there was another 4″ snow.  (I never saw the chipmunk again – he must have gone back to bed.) (That’s kale micro greens on the windowsill – my easiest-to-grow winter salad.) 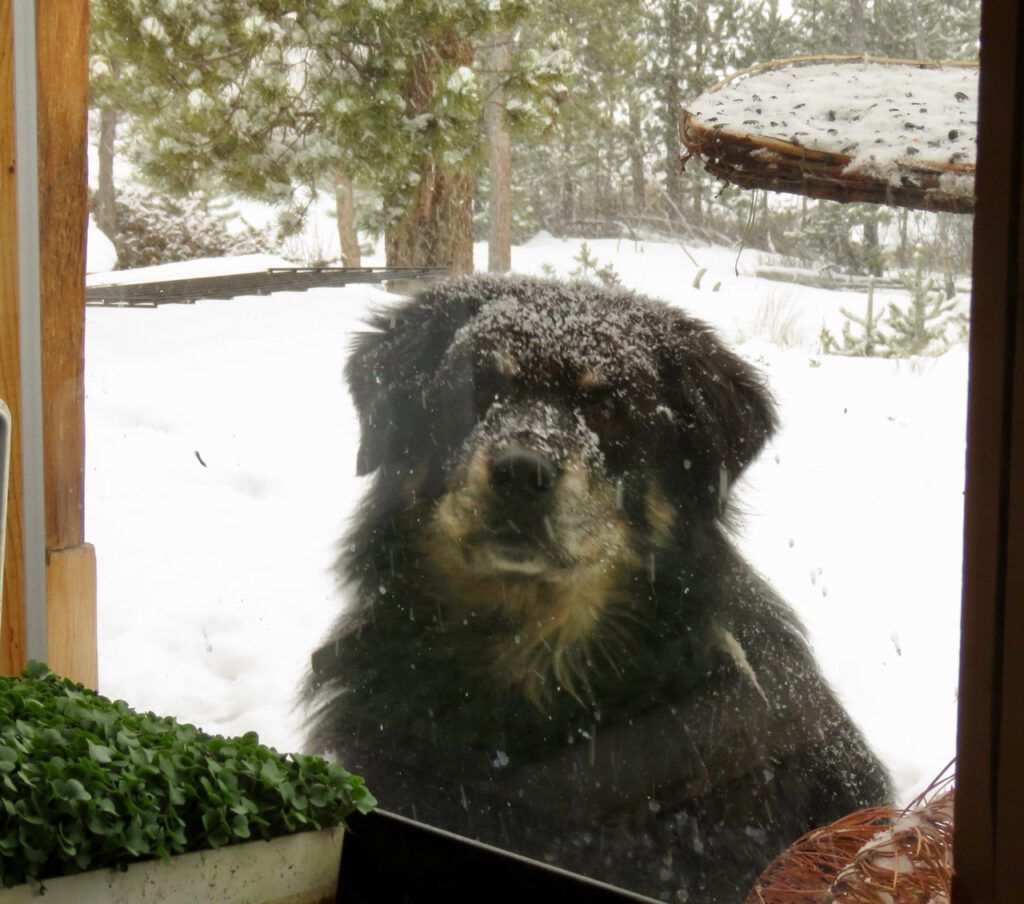 During the milder afternoons, birds have been sneaking north, but the earlier arrivals haven’t yet moved on.  When the snow covers the open patches in the ground,  it is an utter feeding frenzy.  Interestingly, the juncos, although bigger than the redpolls, are quite frightened of them. 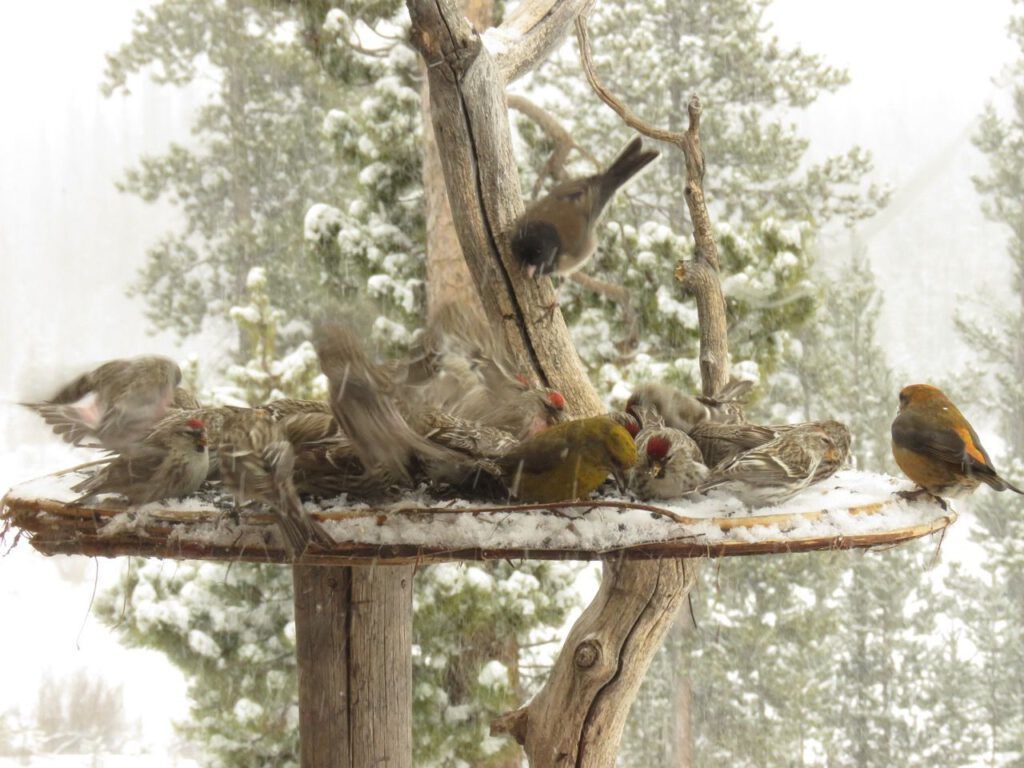 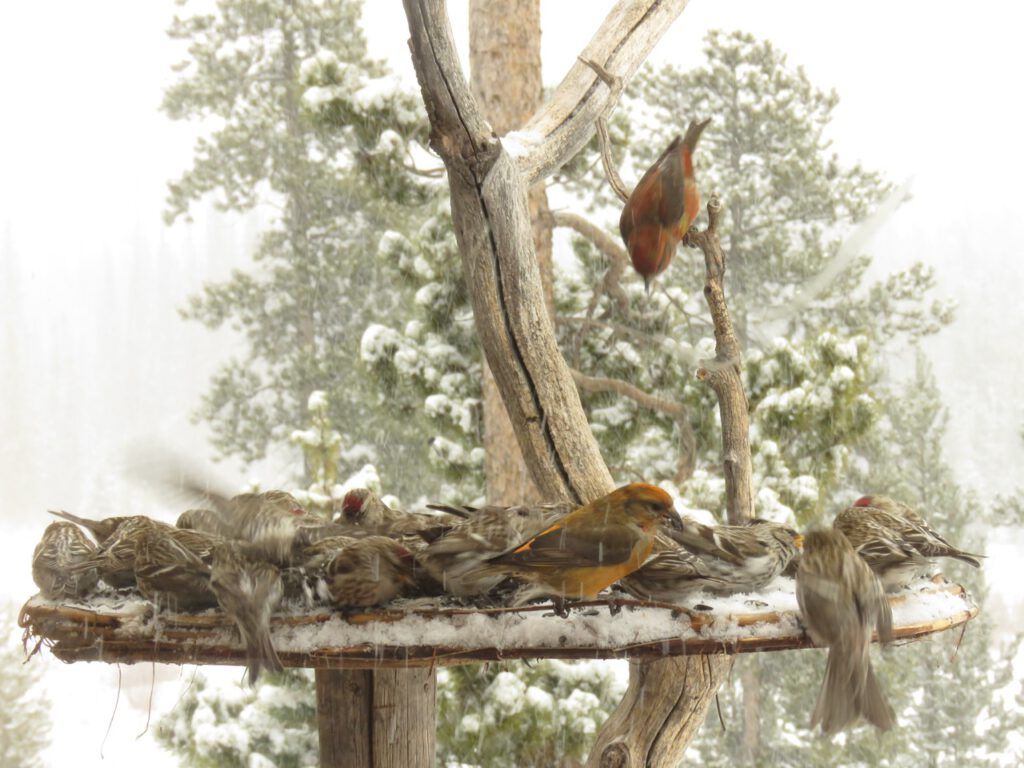 I took pity on them and tossed seed onto the deck.  There must be a hundred birds grabbing a hand-out. 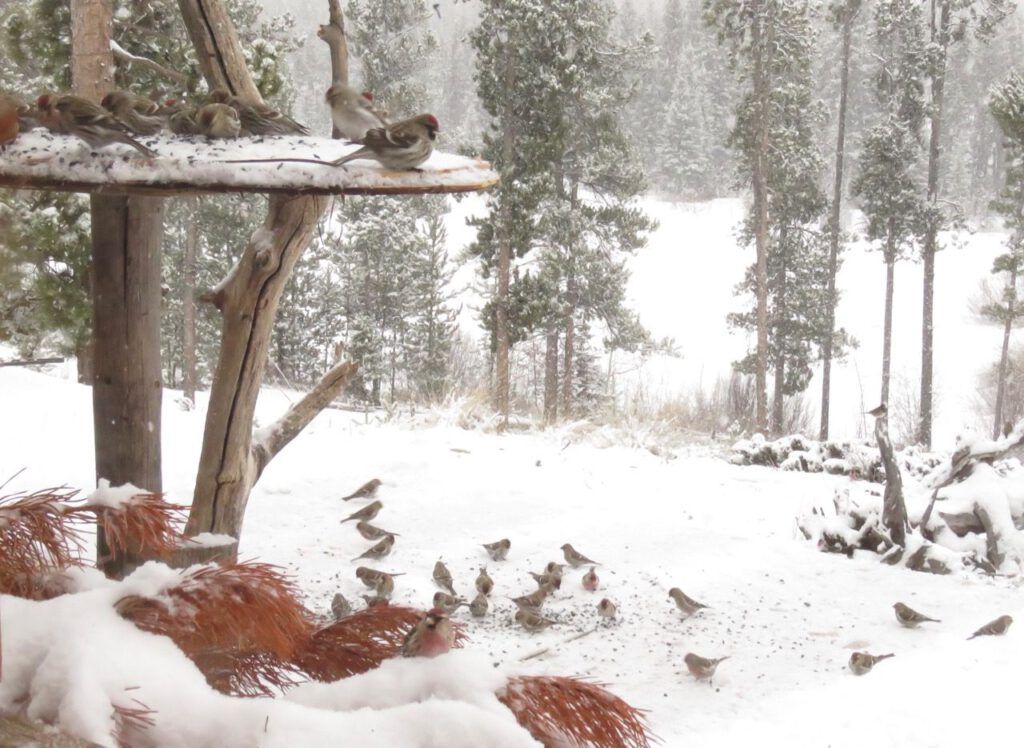