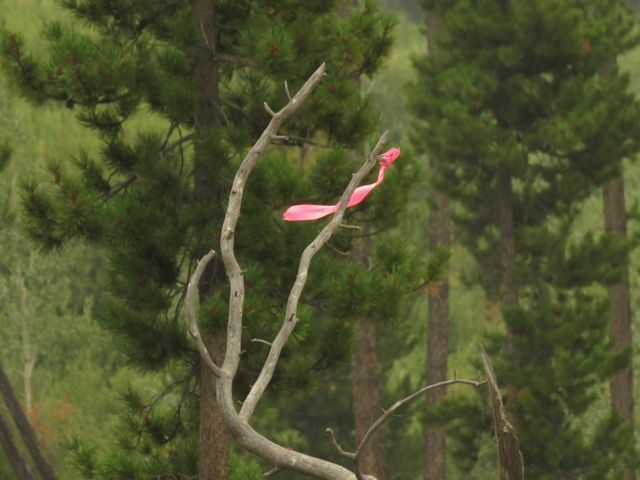 The fire dragon feeds on wind.  You can give it is much sustenance as you like – nice resinous branches, trash-filled underbrush, bone-dry grass, but without wind it will simply putter along, nibbling here and there, sampling this or that, and occasionally gobble a more tasty morcel, but it won’t go very far or fast.  Sometimes it will skitter around in a circle and consume itself.  It’s digestion is poor, and its exhalations will be thick and dense.  Wind is the sauce that makes it come to life.

Everyone involved with the fires was fed up with the smoke.  Wind was promised for the weekend, and on the one hand I welcomed the change, on the other I knew it might not be very comfortable.

I last wrote Wednesday.  Thursday Anahim and Nimpo Lakes, who are down wind from the Precipice Fire, were put on Evacuation Order.  “You must leave the area immediately,” was part of the instructions.  There would be police blocks near Tatla and in the Bella Coola Valley.  They would let people out but not in.  Us locals felt it was a bit of an overkill, but it would get rid of the few extraneous tourists who had crept in since Highway 20 had been opened a few days before.  In fact I think the area has more people in it than would be normal in the summer, even with the tourist businesses operating, because of the floods of fire fighters and army personnel that have arrived.

At almost the same time I got word that someone had some home-made cheese for me at Anahim Lake: I cannot eat pasteurized dairy, but drool over products from creamy, Jersey-cross cows.  My area is already under Evacuation Order – I wondered if there would be barriers but decided to drive the 50 minutes to Anahim to see.  This stuff was so precious I couldn’t let it go – especially as I’m getting low on quite a few things including nuts and must rely on meat and eggs for protein (I can’t eat beans).  It was still calm although the smoke was a little less thick than it had been.  I collected the dairy produce without incident.  Everyone I talked to was staying. 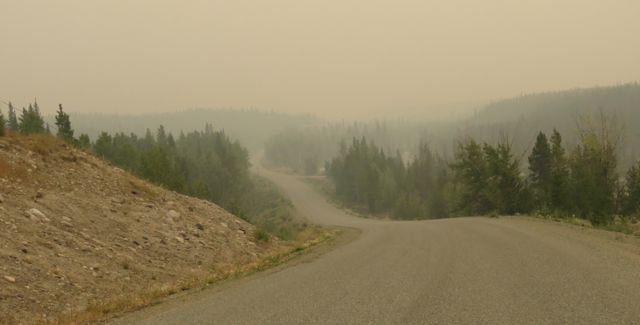 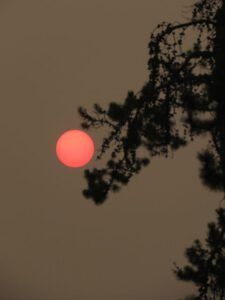 I could see a little further than I had been doing. 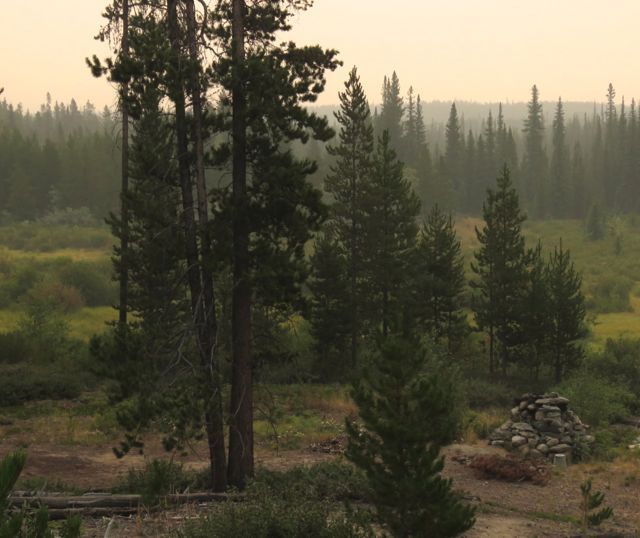 That morning the sun was strong enough to make distinctive shadows. 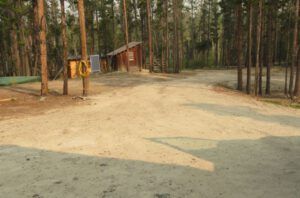 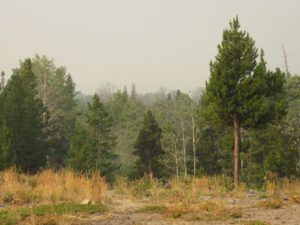 I get farm eggs through from the post office manager.  Friday is a mail day.  I asked if she could bring some.  “It’s closed while we are evacuated,” she said. Oh yes – I forgot we were supposed to be out.  Apparently we could go to Williams Lake and pick the mail up – fat chance of that.  (It’s 3 and half hours’ drive.)  I daren’t go east of the fire.  I just hope Canada Post waivers its usual bureaucracy and hangs onto the mail for more than 72 hours.  I am expecting a box of HARRY: A WILDERNESS DOG SAGA so I can mail them out.  (All mail orders of the book have been put on hold, needless to say.)

It was hot.  One of the hottest days so far.  At noon, the Windfinder site showed slightly more air movement (my place is where the little hand rests.)  The strong winds down the coast had dropped. Inland winds are coming from the SSW – directly from Finger Peak. 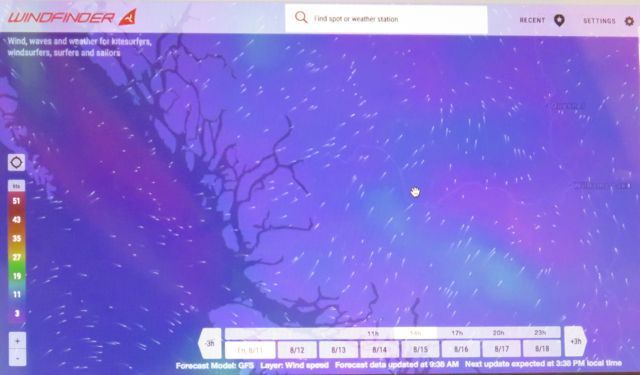 The flag-o-metre echoes the calm. 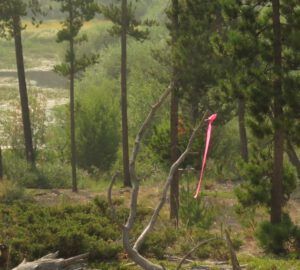 It was already about 4.00:pm when the wind started, later than one would expect.  Mt Nogwon appeared at the same time as a column of brown smoke rose rapidly from the Finger Peak end of the fire. 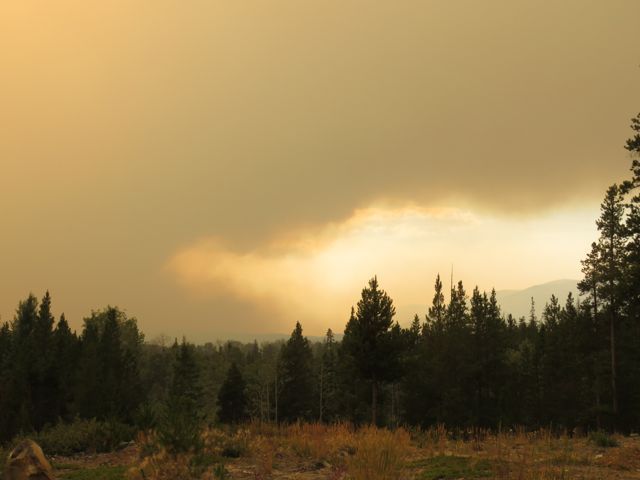 The sun was still strong enough to shine.  The light had been upgraded from brown to orange.  (Note the boxes against the wall in the back.  They are my escape piles.  They have been sitting there for 5 weeks.) 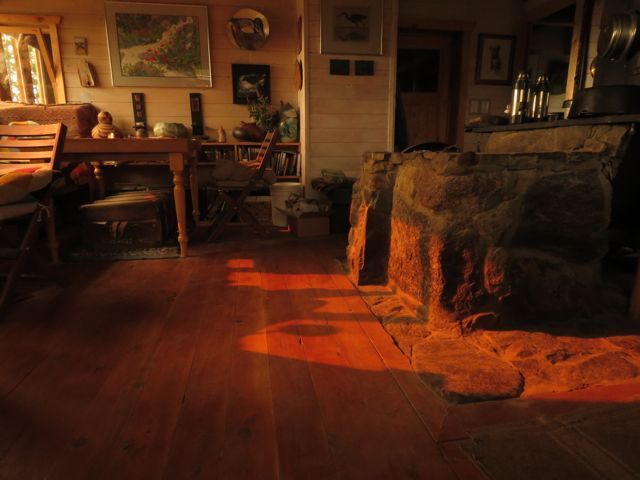 Two hours of strong gusts and it became very dark.  I wondered if there was cloud above the smoke but the sun kept poking through.  My body reacts to light, or lack of it, and it seemed like bed time, but the sun is in this position by around 5.00:pm. 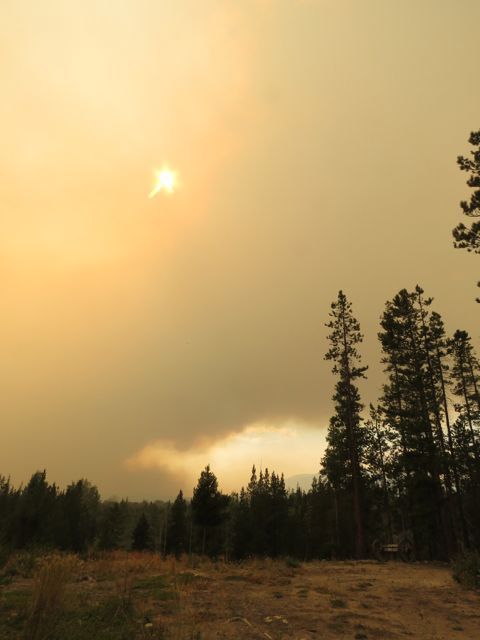 Then the wind grew more violent.  A “steam” tower emerged, showing the fire was very hot. 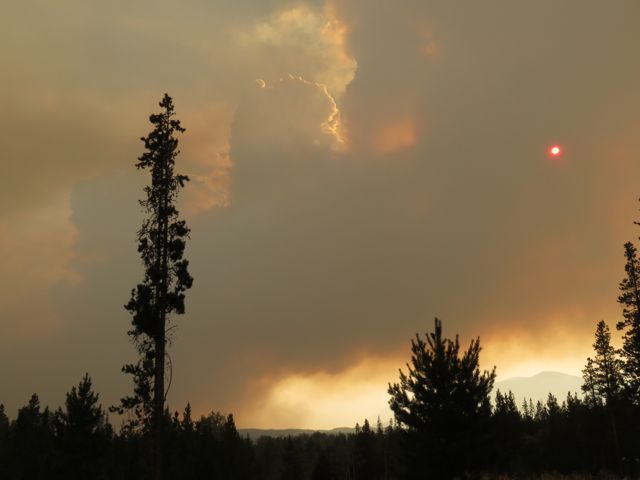 I have learned that these clouds are not just steam, but a cloud formed by a complicated process of heat and particles.  The behave like thunder clouds and may even have ice particles in them.  Severe fires and volcanoes can actually produce thunderstorms within them.  This happened with the Fort McMurray fire last year.  These clouds are called flammegenitus or a pyrocumulus cloud.

The wind died after a couple of hours and the fire dragon took a nap to digest his meal.  Saturday morning dawned calm and smoky again – this time I could smell it.  No doubt because new and probably slightly different material had been burned.  It was also a lot warmer than it had been: 9C instead of 4 or 5C.  Warm mornings indicate more instability in the weather.

The first panic was no Internet.  How could I see what the fire was doing on the fire sites?  How could I find out if my Precipice friends, who are surrounded by their fire, have survived the night?  (The post regularly on Facebook – a private group.)  How dependent on this form of communication I had become.  I was too agitated to eat my breakfast.  But an hour later I was on line again.  What a relief. 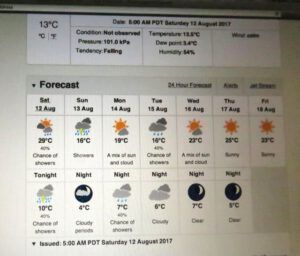 Another hot day – and thunderstorms in the offing.  Windfinder showed light winds for the time being – but directly from the Finger Peak fire.  I doubted, however, that the showers would amount to anything (and I was right.) Still, there was a sunrise of sorts.  The first I had seen for a long time and I rushed out and took several pictures. 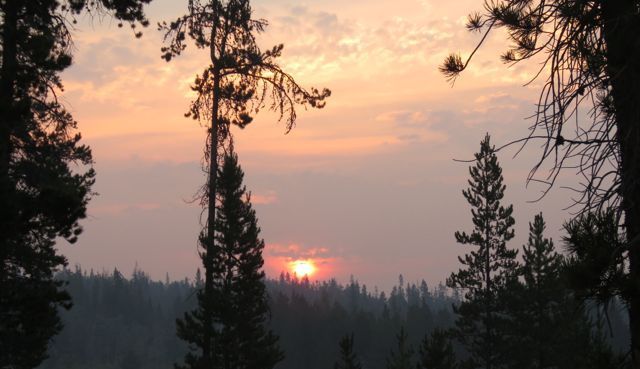 Sun shone through the kitchen window as I did dishes, but soon it got dark again.  I tried going for a hike but it was too buggy and smokey to enjoy being out for long.  I heard helicopters working for the first time since the smoke.  They were very busy but all at the east end of the fire.  No one cares about our end as it is not yet all that close to the road.

My flag-o-metre fluttered a little, then fell still again.  Then suddenly, at 6.00:pm, violent gusts started.  I could see nothing towards the mountains anyway, and now an enormous dark wall of smoke covered the whole quarter from S to W.  It was so thick and formless I could not see where it was from.  The hot ground wind puffed from the southwest, but an occasional movement of the dark mass showed the smoke was billowing from the south.  By 7.30:pm the gusts were less violent but still strong enough to sway trees.  The fire websites hadn’t caught up with this new activity yet so they were no help in finding out what was going on.

Then we heard that Highway 20 was now closed at Riske Creek closer to Williams lake.  The terrible fires there must have roared up again.

In the middle of the night I woke to a thick blackness full of a very acrid smell.  It was dead calm and tons of smoke now blanketed my home.  I switched on the Internet, but none of the sites had yet registered the new activity.  Breathing was very unpleasant.  I shut all windows and doors and would a scarf around my face.  I was able to eventually go back to sleep that way.

But this morning was bizarre.  I could SEE!!!  And there were the mountains for the first time since a window of clear air opened up the last time the fire erupted on August 5th. 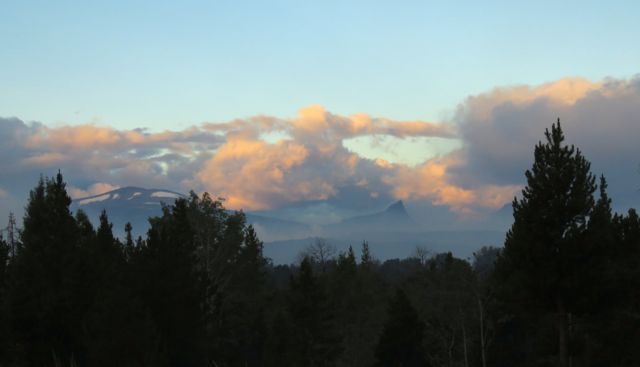 Now the Internet told the story of the night before.

Most of the fires didn’t seem to have done much.  Their winds were not strong. 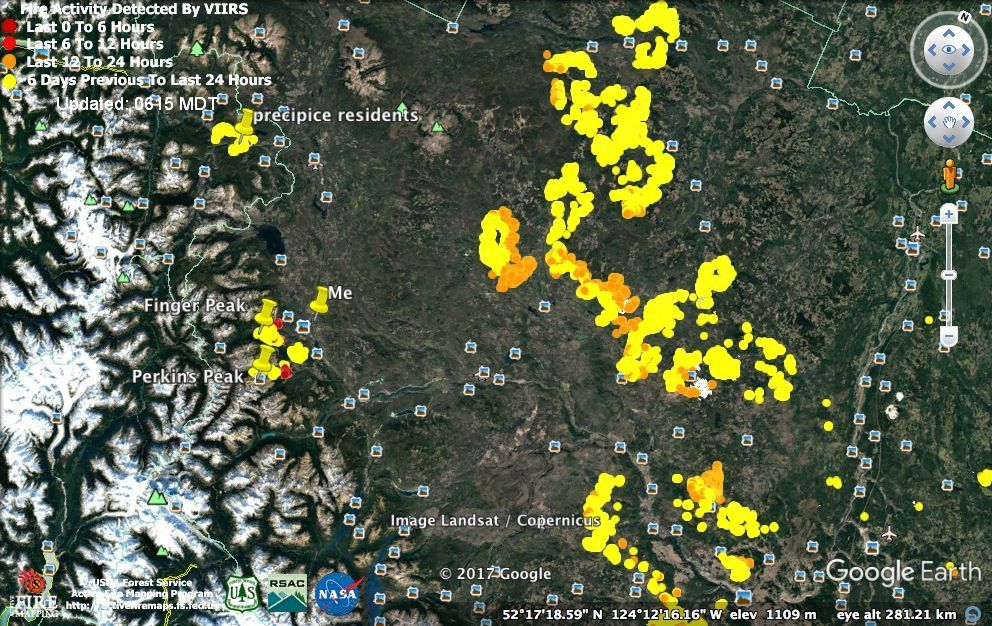 It’s only the Kleena Kleene fire (with thumbtacks around it on the left) that showed fresh activity.  And it was violent.  The fire is now galloping towards Big Stick Lake and if nothing is done about it, it will become dangerous to me. 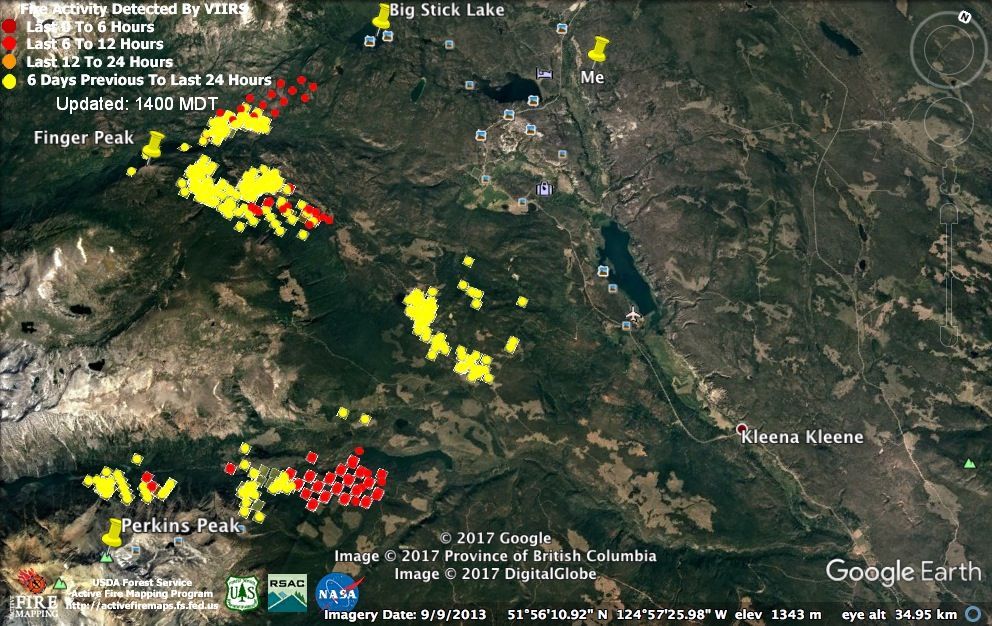 My friend in the Bella Coola Valley emailed and said she heard traffic on the road.  Apparently they were letting traffic east in the morning, hoping they could keep the highway open to Williams Lake.  They did not know when another exodus would be granted.  Nobody was allowed west.

My flag-o-metre started to dance before 9.00:am. 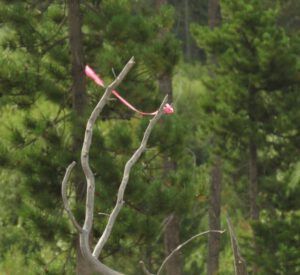 But the air around me stayed surprisingly clear.  It smelled so sweet  – but I expect if this had been a “normal” summer the smoke smell would have been very strong.  I hadn’t had a decent hike for a very long time.  I figured the south bluff would give me the best overview. 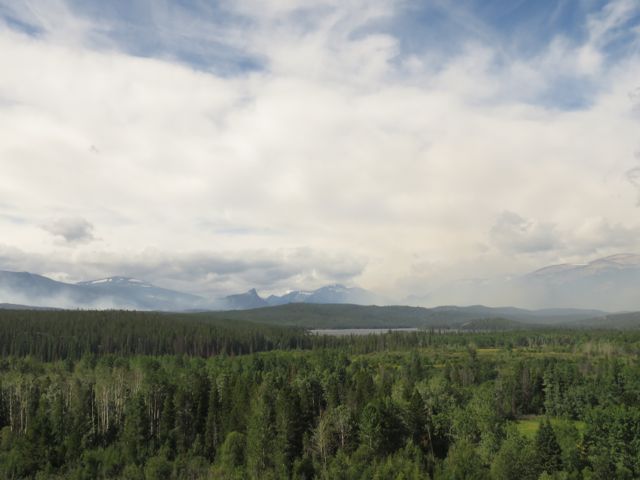 Hard to believe last night’s fire was so furious and the smoke so thick.  Finger Peak is still smouldering.  Steep mountains lopes act like chimneys and exaggerate the fire winds.  Maybe this old volcanic core is reminiscing about it’s earthly origins. 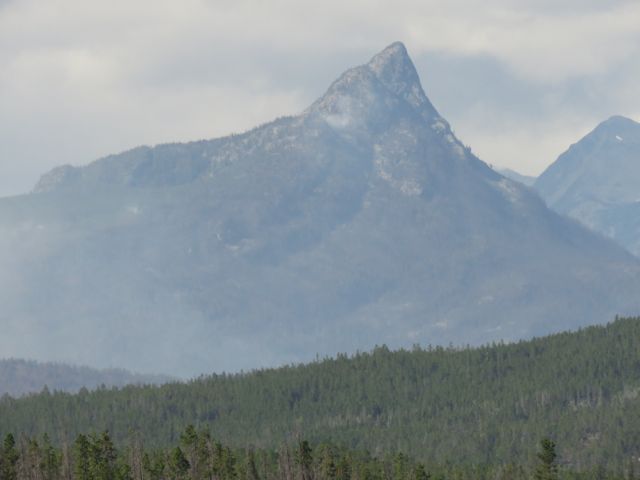 The part of the fire that was so hot further east already had a pyrocumulous cloud.  this is somewhat disconcerting so early in the day. 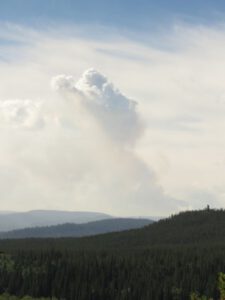 It is now 4.30:pm.  Some wild gusts still happen but the wind is a lot more gentle.  Unfortunately, this means the smoke is accumulating again. 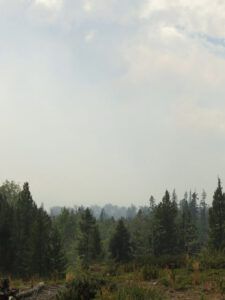 I could go back to the Bella Coola Valley.  They had a little rain, as did the Precipice.  Not enough to do much good, but it helps clear the air a little. 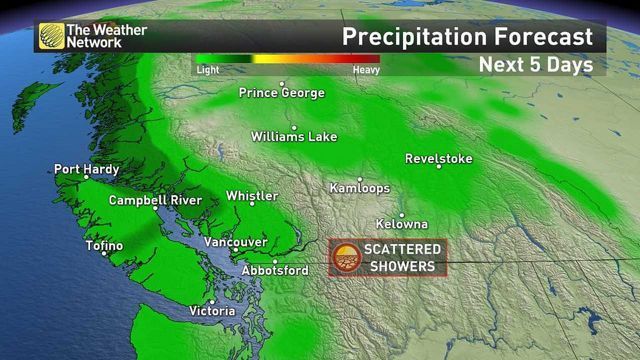 Maybe if I did that they would let me back home. I would have to get a special permit.  Would they consider my garden an important enough reason for me to travel through the fire zone?  Would they let me if my home was under Evacuation Order?  If they didn’t make such strict rules, I would be inclined to leave just because of the smoke.  But I can’t risk not being able to get home again soon.

One wonders when this is all going to end.